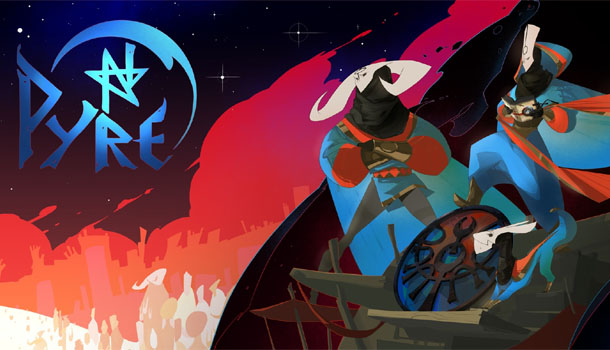 A refreshing adventure that doesn’t disappoint.

If there is one thing that I’ve learned over the years of playing and reviewing games is that there is always something new that surprises me. Even if that something new takes tried and true gameplay mechanics from different genres and puts them together to create something different and special. Take developer Supergiant Games, an indie studio with 2 solid RPG based titles in under their belts. So it only seems natural for them to continue that trend with their latest release Pyre available now for PC.

Pyre isn’t just any RPG though as it combines classic RPG elements with sports of all things. Sure there are sports games that feature RPG elements like Sony’s signature sports franchise but the reverse is far less common in the gaming market. But before I get into its actual combat, I should cover the reason for it in the first place in Pyre’s seeming oppressive world.

When the story starts you are found left to die in banishment in the Downside. This unforgiving landscape is home to all that have been exiled from the shining Commonwealth for crimes against their rules. It seems that chief amongst these crimes in the Commonwealth is the ability to read, which may or may not be the cause of the main character’s exiles. No matter your choice when your first asked if you can read you are thrust into the role of Reader. This makes you uniquely qualified to not only read special tomes but the evening stars as well as you embark on your journey with your rescuers. 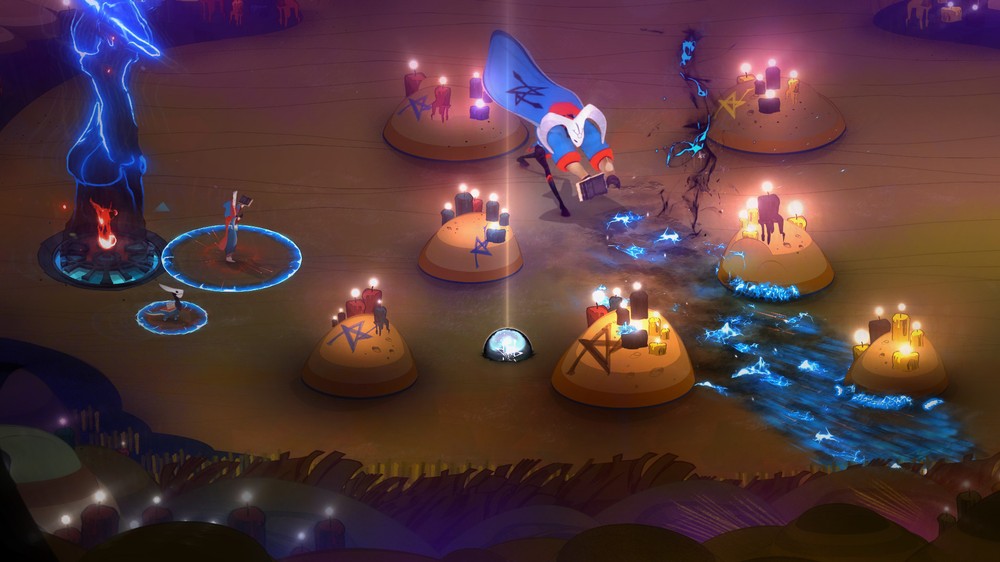 Your journey as it is revealed is to lead others to places where the Rites take place. These Rites are competitions that are not a means for glory but for freedom. Those that compete and win in the final Rite can gain their freedom and rejoin the Commonwealth with another of their choosing. Each character has their own story and want for freedom that you will learn as you interact with them which is really interesting.

This is especially true since unlike Supergiant’s other titles you aren’t really the main focus of this story this time. You play more of an observer from an almost fourth wall perspective as you make decisions like which paths to take when the rest of the troops are at odds. Taking different paths along the way can net you different rewards to aid you along away including incredibly useful talismans. These items when equipped will give characters special abilities like one that gives a normally slow character like Jodariel1 an increase in movement speed.

This is abundantly clear almost from the start when you engage in a mock battle of sorts. Unlike most RPGs, Pyre’s main gameplay is unique in the fact that there is no real direct conflict. Among the best way to define Pyre’s combat is either akin to Destiny’s Rift or on a basic level a game of 3-on-3 basketball. At first you only have the three characters you first meet to compete with but as you go you’ll unlock more to your roster. Your character, Reader, doesn’t actually join in the Rites but merely facilitates the action. You take control of the triumvirate of the Nightwings as you race to pick up an orb in the middle of the playfield and dunk it in the opposing side’s fiery signal. 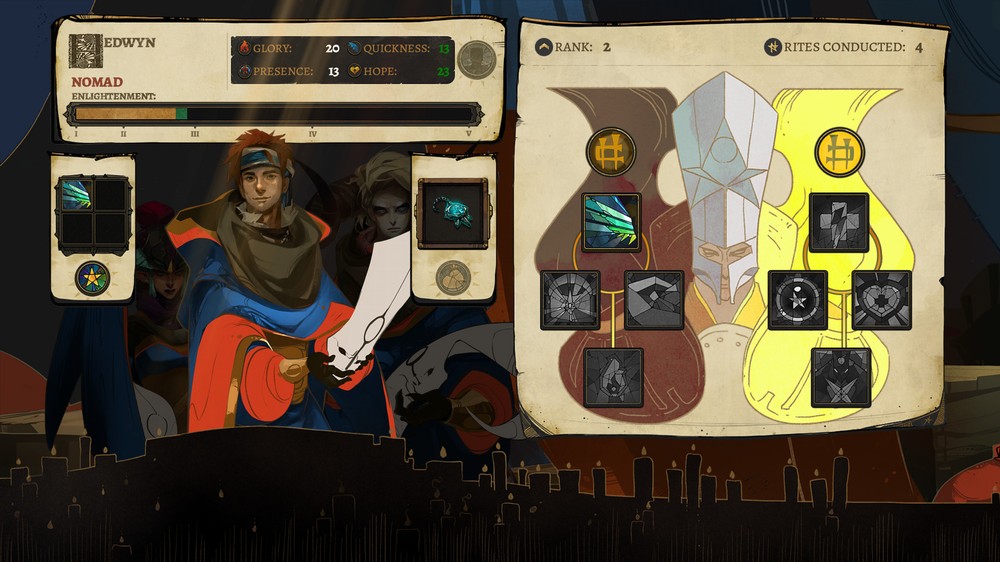 While that’s a pretty straight forward concept there is more to Pyre’s gameplay than that. Pyre’s world is comprised of several races from humans like the nomads to more exotic ones like demons, tree folk known as Saps and flying Harps. That is just a few of the races found within Pyre and they all have different skills. For instance players might be keen on just focusing on Rukey Greentail due to his fast speed. Truth be told I have scored more than my far share with him but Pyre is about balance. One the other end of the spectrum you have Jodariel, a huge demon girl, that it while slow moving is excellent for defense. In the middle of the initial trio is Hedwyn, while not as fast Rukey, is still agile.

But the real diversity of all the races is how they perform in competition. Each player has an aura said to be equal in size to that of their crimes. This aura can be used as weapon of sorts to banish units from the field only momentarily. This opens up brief opportunities of control the orb as you pass it off from one teammate to another. The trade-off is that you can’t use your aura as the orb absorbs your aura. The thematic focus in competition for Pyre is that the three must be as one. There is also the matter of when a character makes a successful dunk it is removed from action for a period of a time. You also have to take in consideration is that larger characters actually do more damage to the fires than smaller ones. 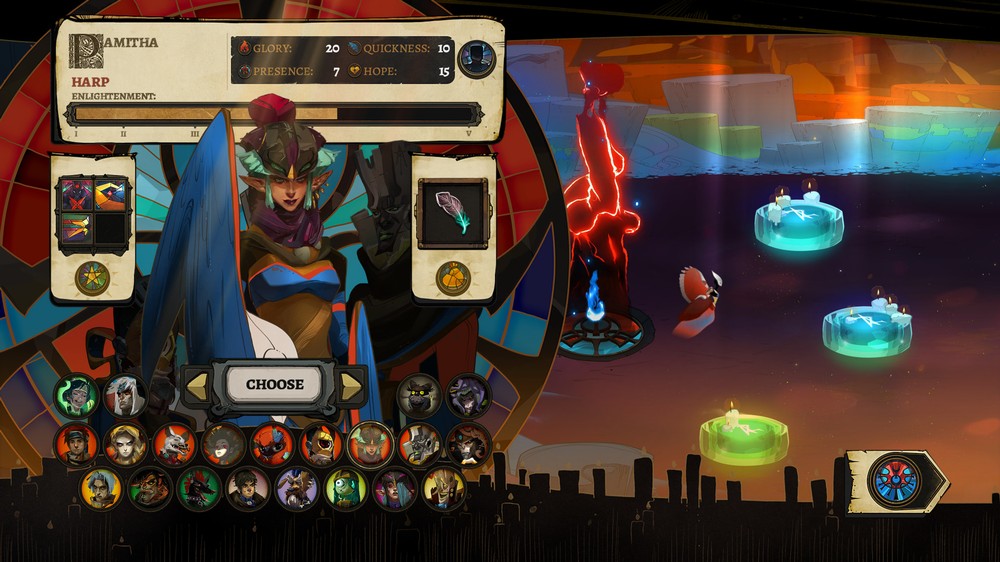 I also love that there is some variances to both how characters use their aura and the designs of the playfields. While the initial three teammates all have the same attack it isn’t until you meet the Wyrm and Harp races that you see something new. Wyrm characters like Sir Gilman can detonate the aura trail that he leaves behind him as he moves. The Harp race uses a similar method where they dash forward and banish anyone caught in their trajectory as they fly over opponents.

It’s nice to have this kind of fluctuation in abilities to change things up and find a balance that works for each player. The developers shake things up by also including obstacles such as rock formations to make players quickly plan their moves. I did find that even when you find a team you like there is still a large dose of repetition of using the same tactics which to be fair is often par for the course with RPGs in general. It’s still a good idea to experiment with each race or character specifically even if it’s only in the Versus Mode as each character has skills specific to them even if they may the same race as another character. There is plenty of diversity in Pyre’s inhabitants both in and out of competition and it’s one of the many things I enjoy about it.

For those wanting a little more competition out of Pyre there is a Versus Mode. Here players can compete against the computer or with another player. This mode is limited to local play so this is perfect for a little couch completion which is something seriously lacking in games outside of usual sports and fighter fare these days. Luckily Pyre offers players several different control schemes whether it be in the Campaign or Versus Mode. By default, the standard keyboard and mouse seems like the best choice at first with the RPG elements being at the forefront. While they do work in the competition I found a controller to be a bit more suited to the sport element of Pyre. It also works well in the narrative akin to using a mouse in adventure titles. 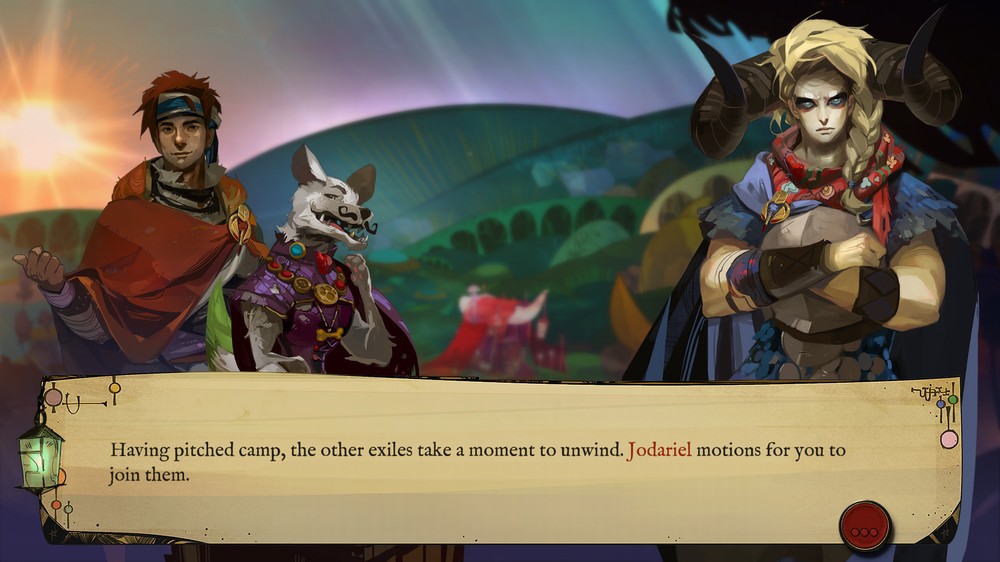 Supergiant titles have always had a stellar presentation since they released on the scene with Bastion several years ago. While their repertoire is small they do not lack in talent behind the scenes. Pyre is easily the most stunning thing they’ve done to date. Their blend of incredibly hand drawn looking environments and character stills layered with 3D objects and animations is nothing short of stunning. I can’t help but see a little Don Bluth influence in Supergiant’s work on Pyre but maybe that’s because I’m a big fan of Bluth’s artistry since I was a kid. I also really dig Pyre’s awesome soundtrack as well the spoken narrative by Logan Cunningham during competitions is sinisterly great. For those that did the soundtrack you can purchase it separately or as a set from the start via Steam.

The thing about indie developers is that they always seem to come up with new and exciting creations that not even major industry giants can seem to match most of the time. In a world of commonplace shooters and sports aplenty, its indie developers like Supergiant Games that I look to for something special. I won’t lie I rather enjoyed both their previous works and Pyre is a refreshing adventure that doesn’t disappoint. It’s not without its quirks but still is a beautiful example of storytelling and enjoyable gameplay when you get right down to the heart of things. If you loved Bastion and Transistor then you owe it yourself to pick up Pyre on PC today. 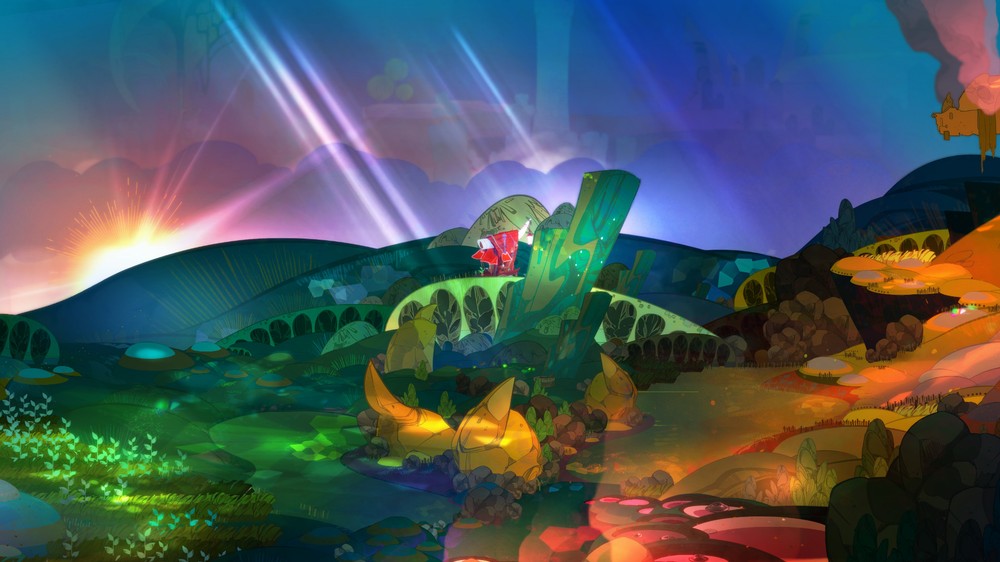 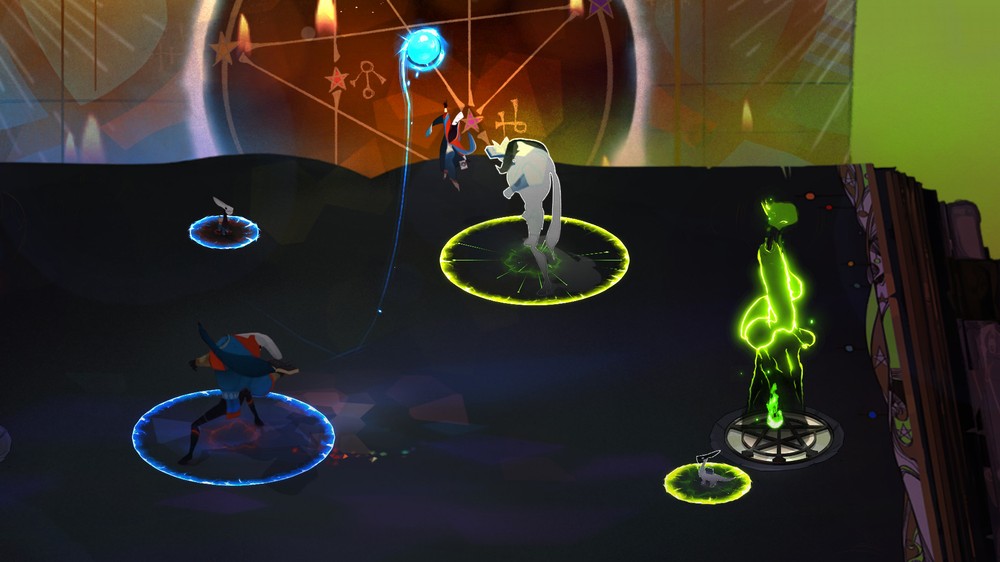 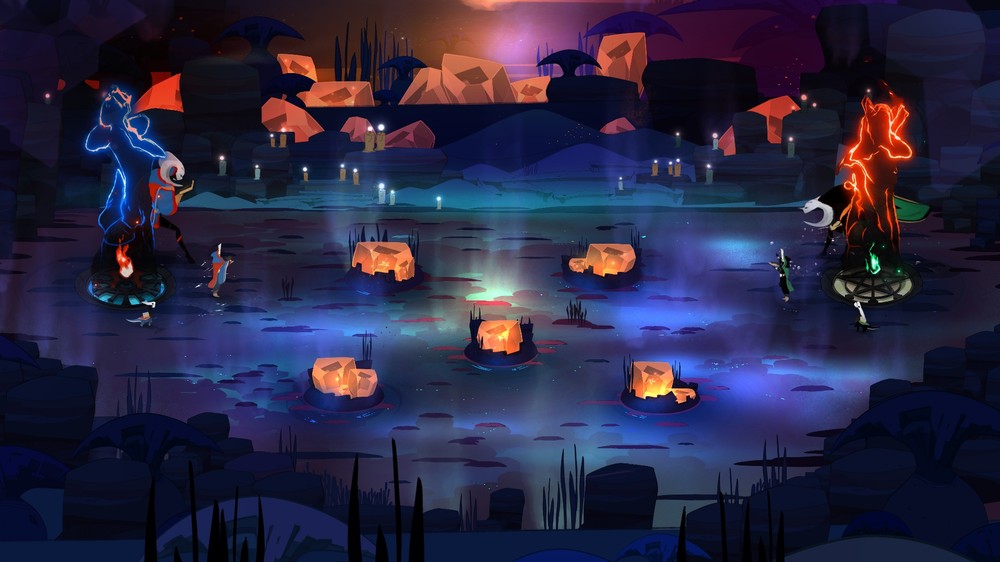 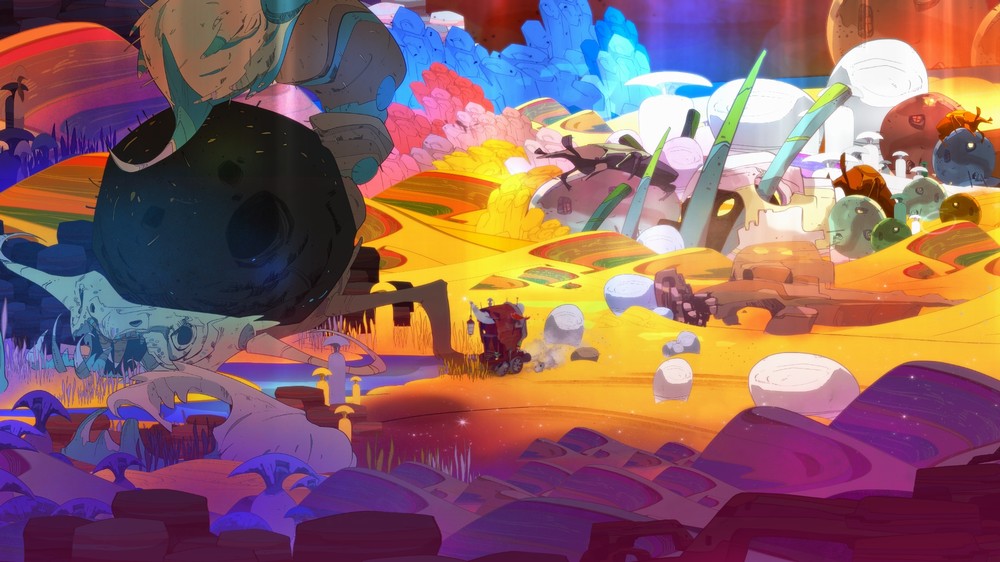 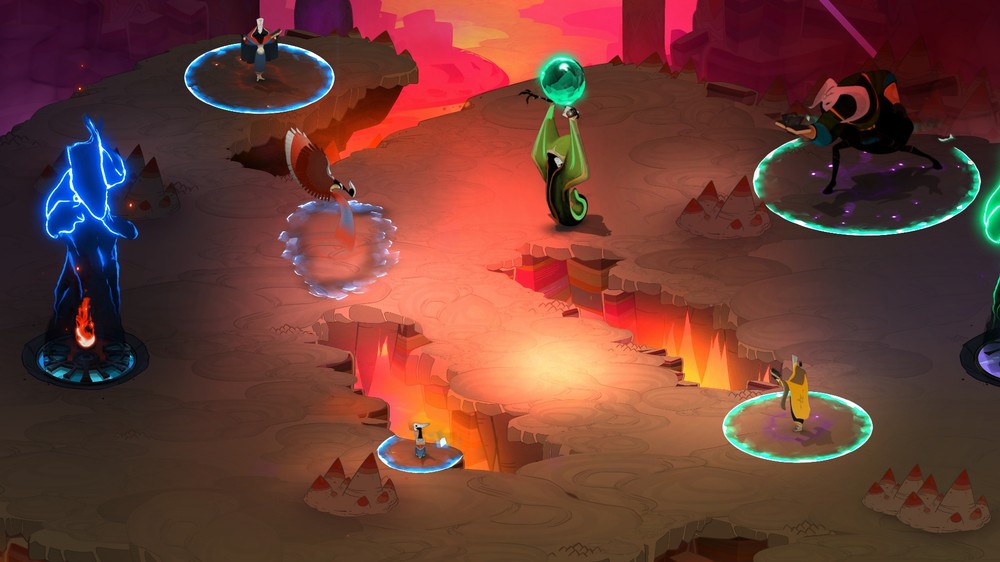