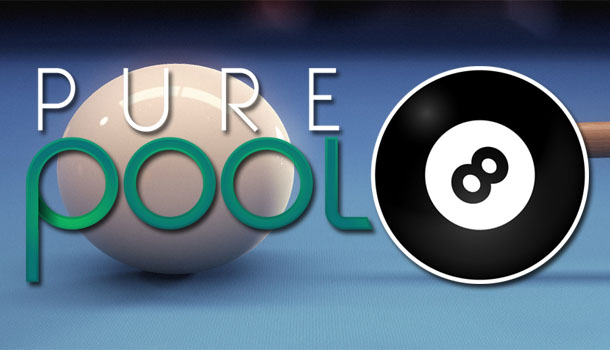 No way to skip opponents’ shots
Quite unforgiving early on

It’s a pool game, pure and simple, and makes no allusions to being anything else.

Pure Pool is exactly what its name suggests. As soon as you load up the game, you find a cue in your (virtual) hand, a pool table racked and ready to go, and that’s it. There’s no fancy graphical stylization and no distractions from the game of pool itself, and that’s one of Pure Pool’s strongest points. It’s a pool game, pure and simple, and makes no allusions to being anything else.

There are two main portions to Pure Pool, those being online leagues and single-player career mode. Online leagues are exactly how they sound, you and a group of friends or fellow players take part in a league, playing each other until someone is declared champion. Career mode is a little more varied, as you play either against a selection of AI characters or, as part of mini-games, either the clock or your own pool skills. Playing through these matches and mini-games awards you up to three stars, which are earned for meeting certain criteria. The first star is awarded for the basic completion of whichever task is presented to you, but the other two are dependent on meeting particular bonus objectives, such as winning a match while coming from behind, or potting a certain number of balls into corner pockets. 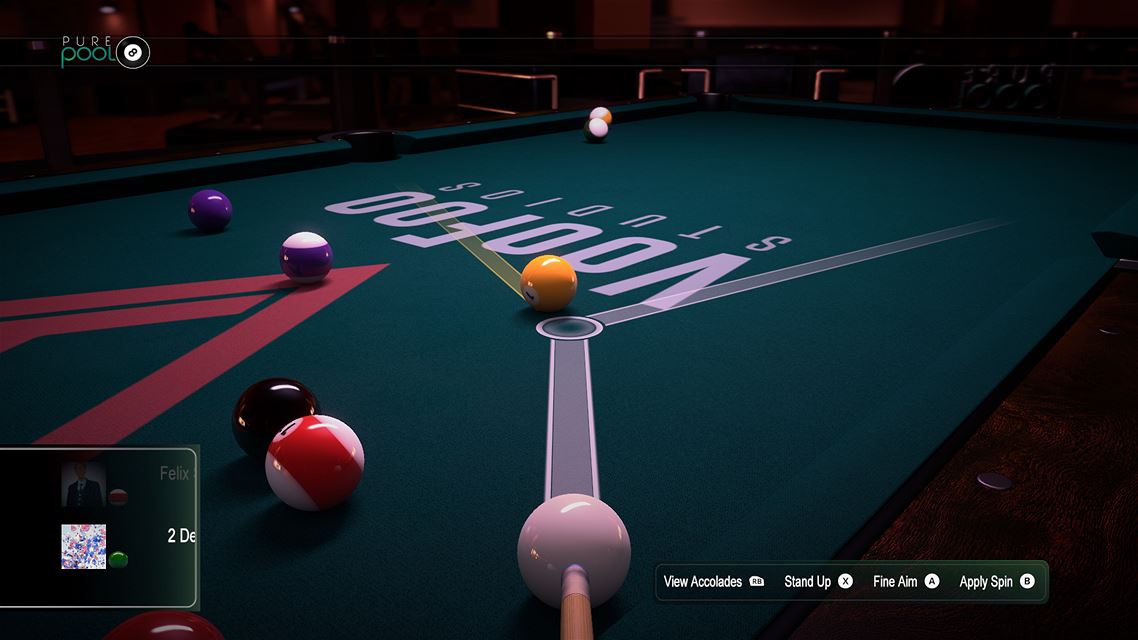 These stars comprise only a part of Pure Pool’s progression system, with the other half made up of XP points. XP is gained both from completing matches, but also by achieving certain feats during a match, such as potting from a particular distance or managing to pot a ball off the break. There is some overlap between XP rewards and star rewards, with certain activities providing both, depending on the particular match you’re playing, but this just means that you get a double bonus. In terms of what they’re used for, stars go towards unlocking further tournaments and difficulty levels, while XP is used to level up your character. Leveling up doesn’t really do anything aside from allow cosmetic changes to your cue, but it also changes the tag against your name from Rookie to Novice and so on, which allows players challenging you to see what your relative skill level is.

Most of your time with Pure Pool will be spent playing against other players, be they human or AI, but if you spend any time within career mode, you’ll be presented with a variety of pool-based mini-games and challenges to complete. These include games such as Speed Pot and Checkpoint, which require you to pot all balls as quickly as possible, or before time runs out, respectively. There are also more complex games such as Killer, where you play against another player, and not potting a ball loses you a life (out of three lives), but potting two in one turn earns you a life, and Perfect Potter, where you need to pot as many balls consecutively as you can. None of the game modes possess much depth, but they do provide a nice aside from the regular game of pool. The only downside to the games, particularly when playing against the computer, is that there’s no way to skip through or speed up your opponent’s turn, leaving you absently observing as they calculate and line up their shots. 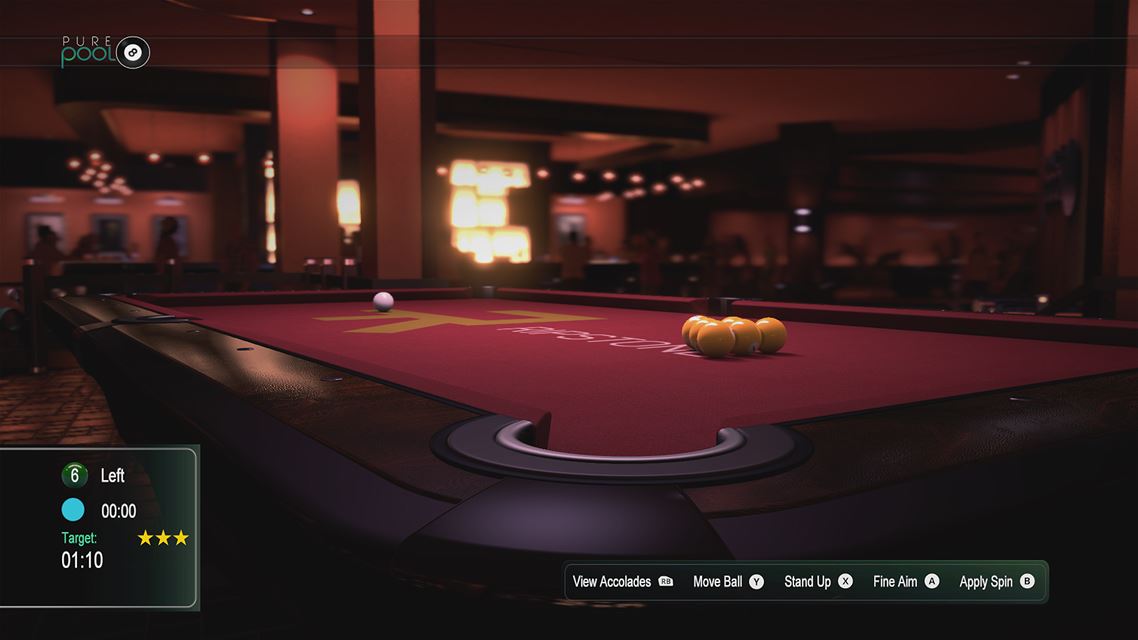 Visually, Pure Pool is a rather simple presentation, but this allows it to focus solely on the game, rather than distracting the player with shiny items and flashy environments. Pure Pool takes place in a single dimly lit bar environment, but the angle at which the game is played means that you won’t be focusing on what’s outside of the table anyway. In terms of customizing the table, you’re able to switch both the color of the cloth, and any decals on the cloth itself, though you’re limited to the preselected visuals included in the game. The audio within the game is similarly minimalist, with a smooth jazz soundtrack that is pleasant enough and comes pretty close to elevator music. It quickly fades into the background though, and mingles with the nice addition of low-level background chatter, which goes a long way to providing the feeling of being in an actual bar.

Pure Pool seems more unforgiving initially than other pool games that I’ve played, that typically allow the player, in the early stages, to clean up the table before their opponent has even potted a single ball. While playing Pure Pool, on the other hand, I lost my first five or so matches, and I didn’t even come close to victory in most of them. However, with time and a bit of practice, I can now comfortably hold my own in most matches, but they do still provide a healthy sense of competition, which provides more incentive to carry on playing than the prospect of breezing by every opponent I play.

This challenge, combined with the simple approach to the game, makes Pure Pool one of the most enjoyable pool games that I’ve played. There’s no ‘world tour’ mode, taking you to different cities that only vary by the famous landmark viewable outside of the window and there’s no powerups, allowing for super powered cues or replayable moments. It’s just a simple game of pool that, while challenging, proves surprisingly relaxing, especially when the basic visuals and soothing audio are taken into account. If you’re looking for a pool game, particularly on the newest generation of consoles, then Pure Pool is an excellent option to consider. 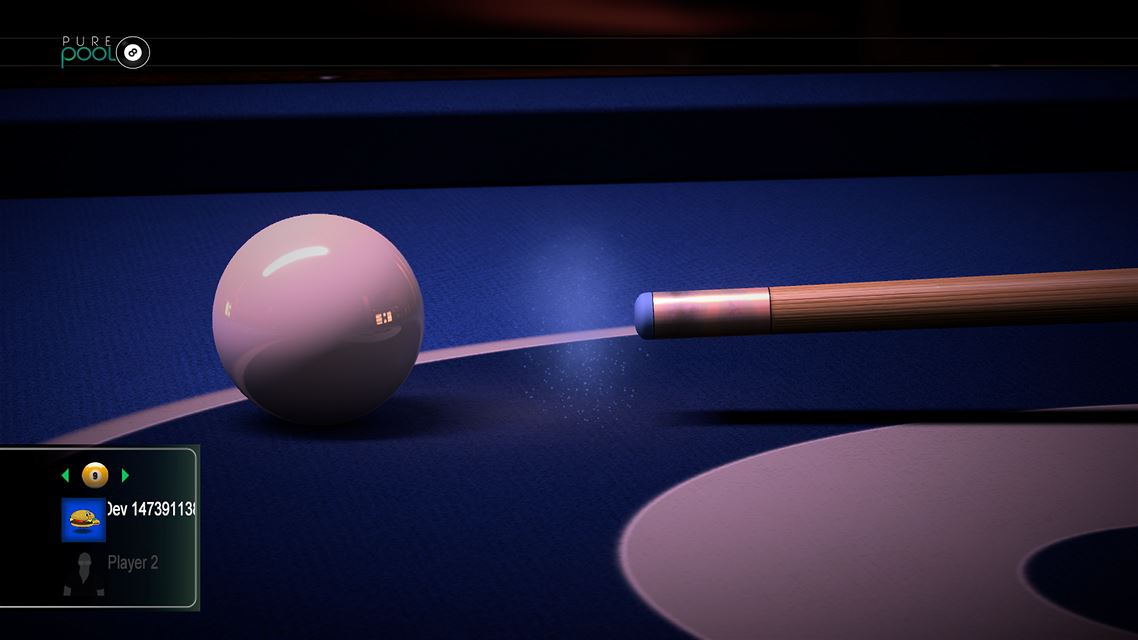 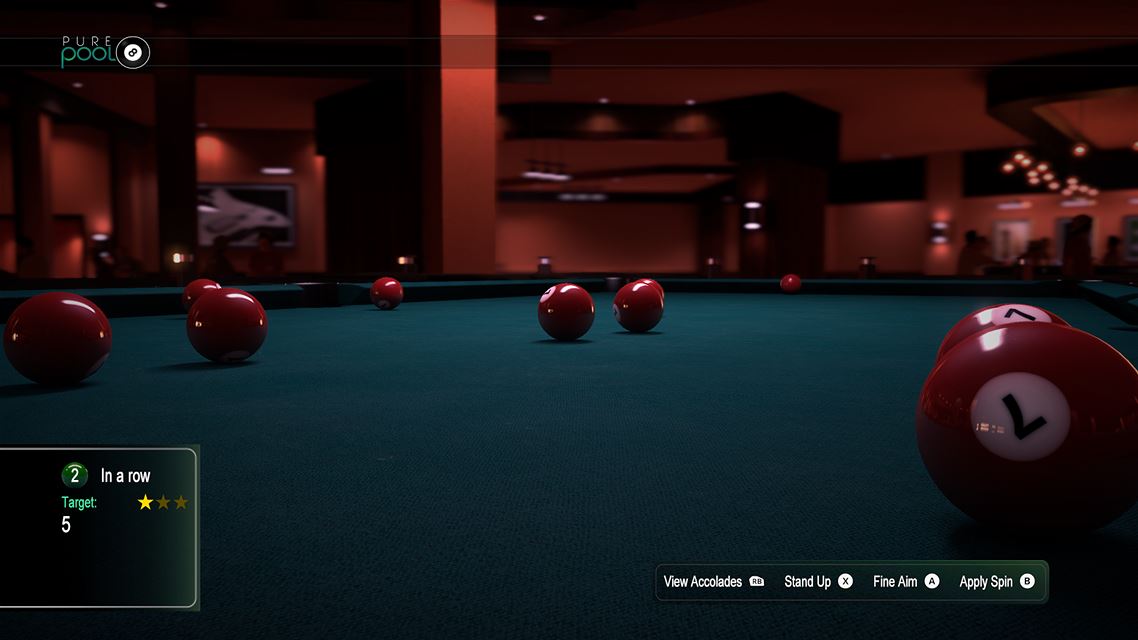 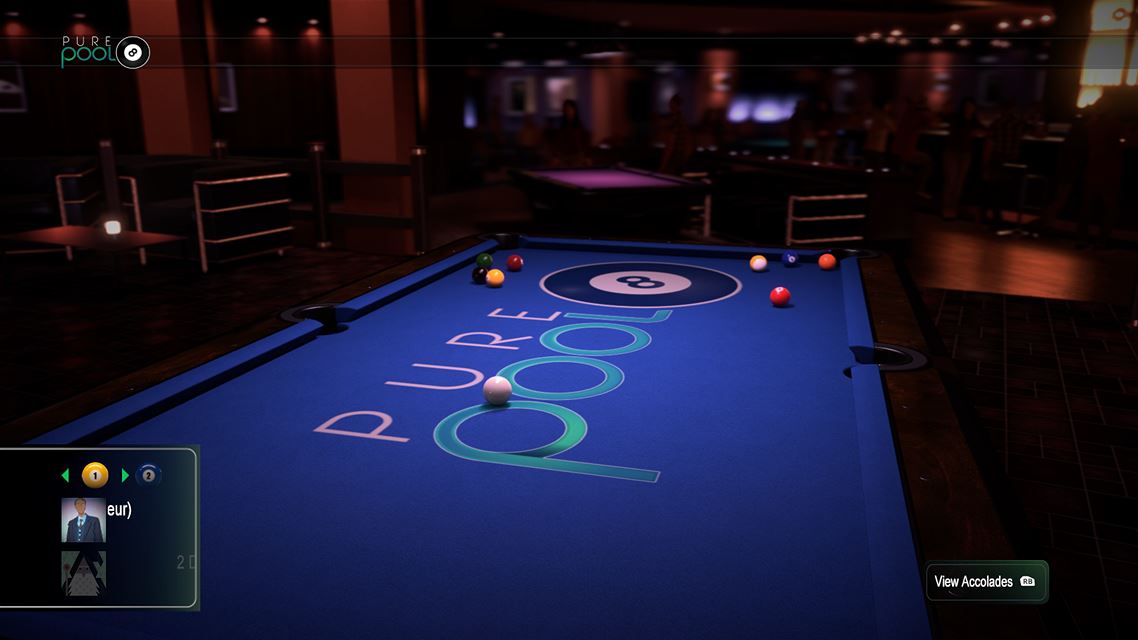 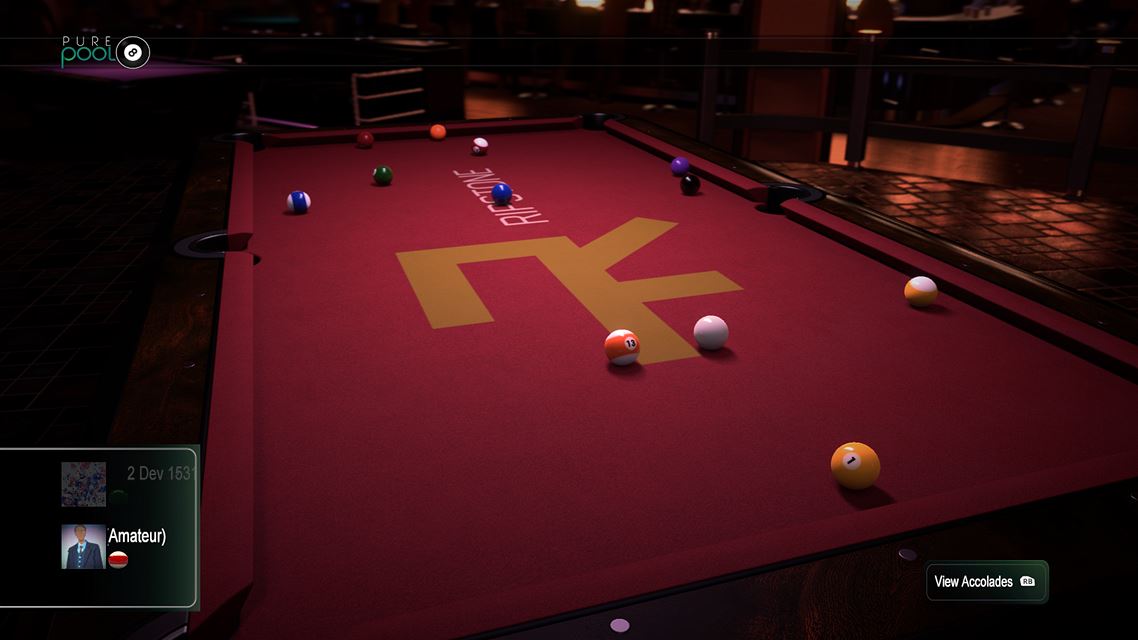 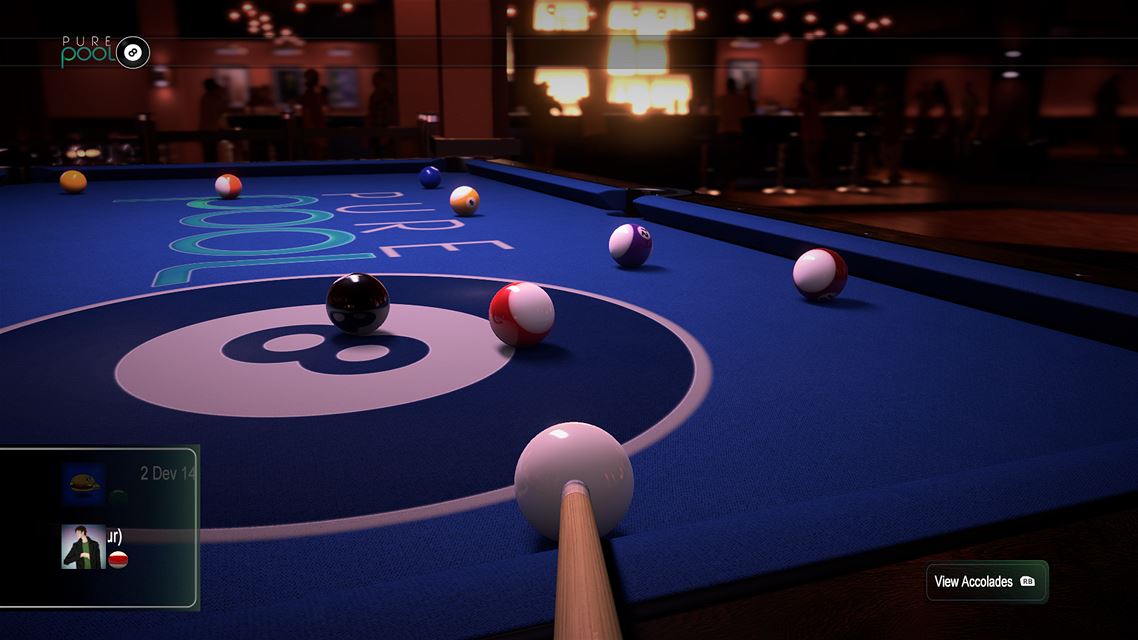 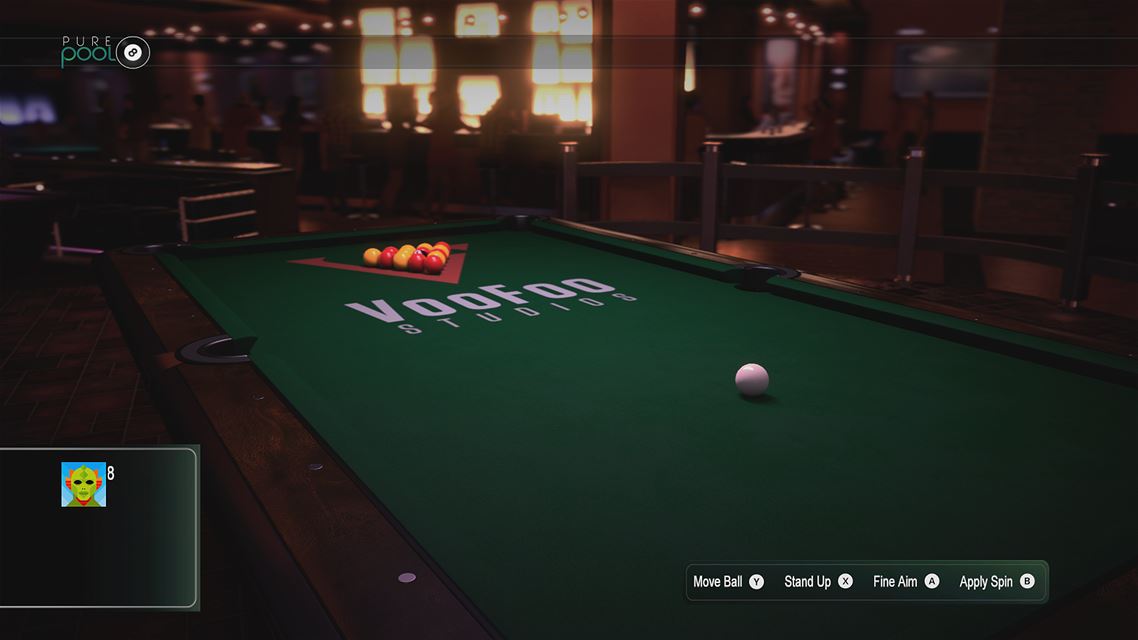 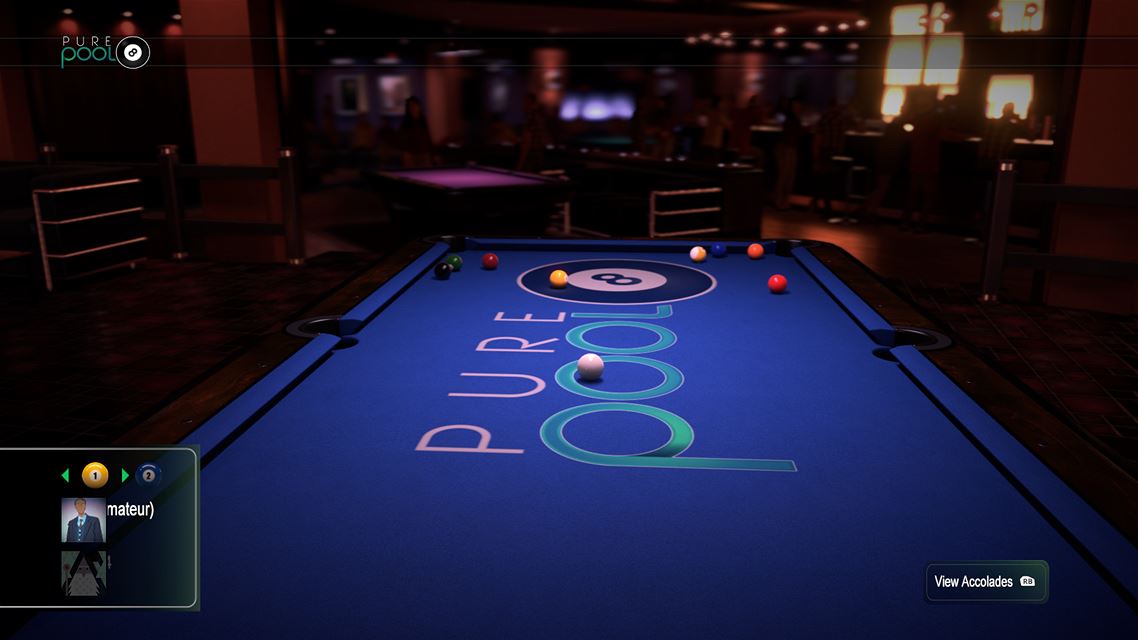