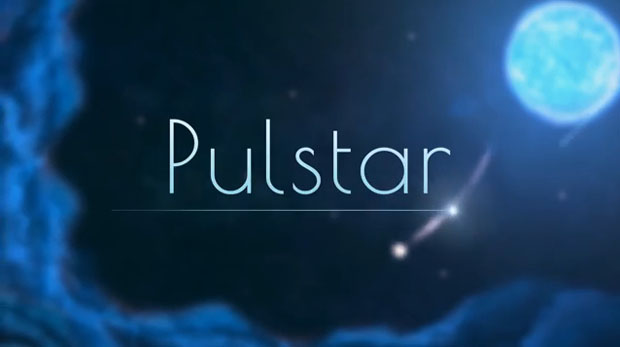 Highly stylized and futuristic version of Geometry Wars with a lot more flair.

While the eyes of the world are all focused on E3 this week indie publisher Indietopia Games dares to launch their new twin-stick shooter, Pulstar to the Steam store.  It’s an interesting dynamic to be watching all the news and trailers for all of these amazing new games headed our way then doing a complete 180 and playing a game that is so rooted in the very foundation of video games.

Pulstar instantly reminded me of the 1979 classic, Asteroids, assuming that game had been a twin-stick shooter.  Perhaps a more relevant comparison would be Geometry Wars or any of the dozens of twin-stick shooters that have released since then regardless of whether they were on land, in the sky, or in this case, outer space.   The game all boils down to moving around one shape while shooting at other shapes for as long as you can stay alive.  Pulstar even manages to work in a pre-game story to give you some precedent for the endless hours you are about to spend with this highly addictive shooter. 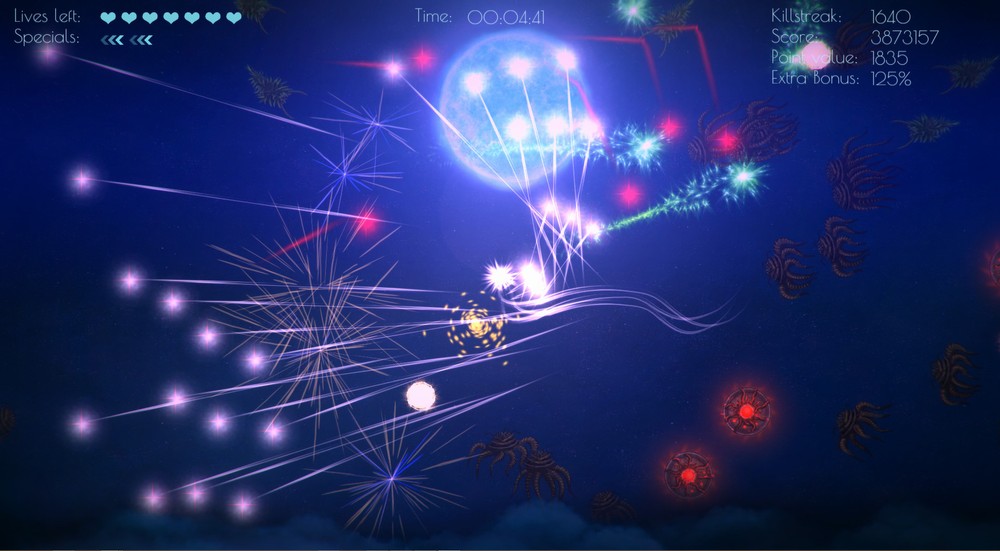 Disposable story aside, the gameplay is fast, furious, and hearkens back to classic coin-op shooters and all the games that have tried to imitate them until now.   The game is light on content.  There is only one level, one background, one player ship, and three enemy types.   You have a squid-like creature that will try to ram you, an insect-like creature that will periodically charge up and fire a green projectile, and a red saucer-like “ship” that will shoot a spread of red energy.  Green enemy fire must be avoided but red shots can be destroyed by your own energy weapon that grows more powerful as you maneuver around the screen avoiding and killing enemies while picking up the various power-ups, heath hearts, and smart bomb icons left behind.

It’s a simple formula really; one designed for short bursts of gameplay lest you get terribly frustrated at the exceedingly challenging difficulty.  It took me nearly an hour to get past the 4-minute mark on the timer.  Yes, the game is timed and scored and they even keep track of your Killstreak; all three of which are ranked on competitive leaderboards so you can challenge your friends or just try to beat your best effort.  But no matter how frustrated you get Pulstar is insanely addictive, designed in such a way that you almost always better your previous performance in at least one of the three scores, and that little bit of positive reinforcement keeps you coming back time and time again.  There is even an entertaining local co-op mode available with its own scoring and leaderboards.

Controls are incredibly easy and responsive allowing you to navigate and fire independently with analog precision.  Since accuracy isn’t an issue I just kept the fire stick pressed in some direction or spiraled for circular cleansing and squeezed the trigger whenever I needed to invoke Pulsetime.  Smart bombs are detonated as you collect them, which adds a bit of strategy in when you want to use them.  You also get to charge your Pulsetime ability to slow down the gameplay and allow you to navigate and fire with extreme precision; a great way to escape impossible odds and certain death since this is not a wrap-around screen – there is a clearly defined and deadly border around the edge.

As far as presentation, Pulstar has a look that can best be described as “indie”.  It’s not as flashy and high-tech as some of the other PC shooters, but it has a style that is refreshingly unique and simple.  Colors are mostly of the blue, green, and red variety with the occasional purple color burst, and there are some great distortion effects during a smart bomb explosion.  You really get to appreciate all the detail during Pulsetime when everything is moving in slow-motion.  Sound effects are suitably sci-fi but it’s the soundtrack that will keep you energized game after game.   This high-energy fusion of electronic and guitar rock maintains a tempo that matches the gameplay perfectly.  It combines with the graphics to create some kind of awesome Pink Floyd concert lightshow.

Pulstar is as basic as it gets, but it is also only $5.  If you break that down to quarters or tokens that is 20 replays, and I guarantee if you buy this you will play it 20 times just in the first hour.  Pulstar isn’t trying to compete with the larger shooters out there, but rather carve its own niche in classic retro-gaming goodness, and with sights, sounds, and gameplay this good and this addictive no twin-stick shooter fan should miss out on Pulstar. 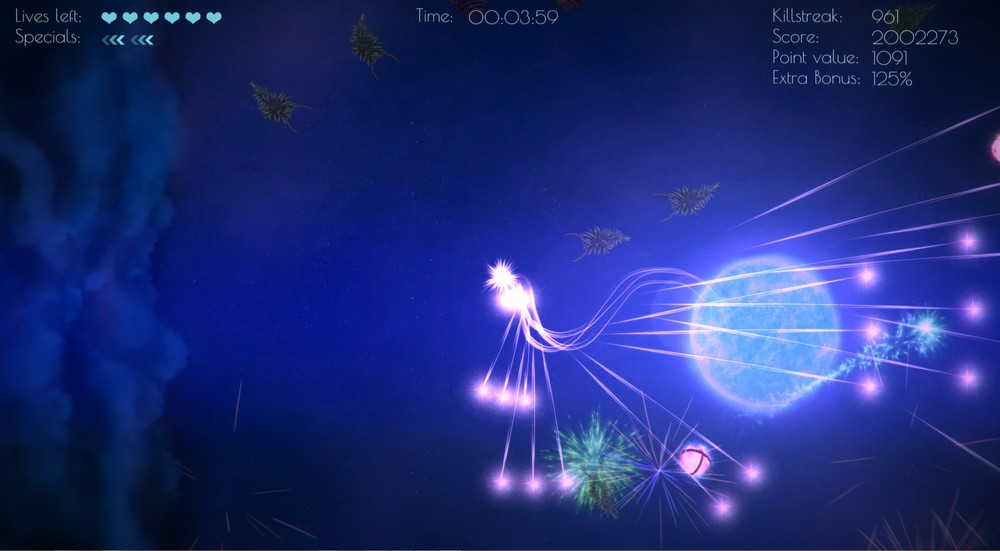 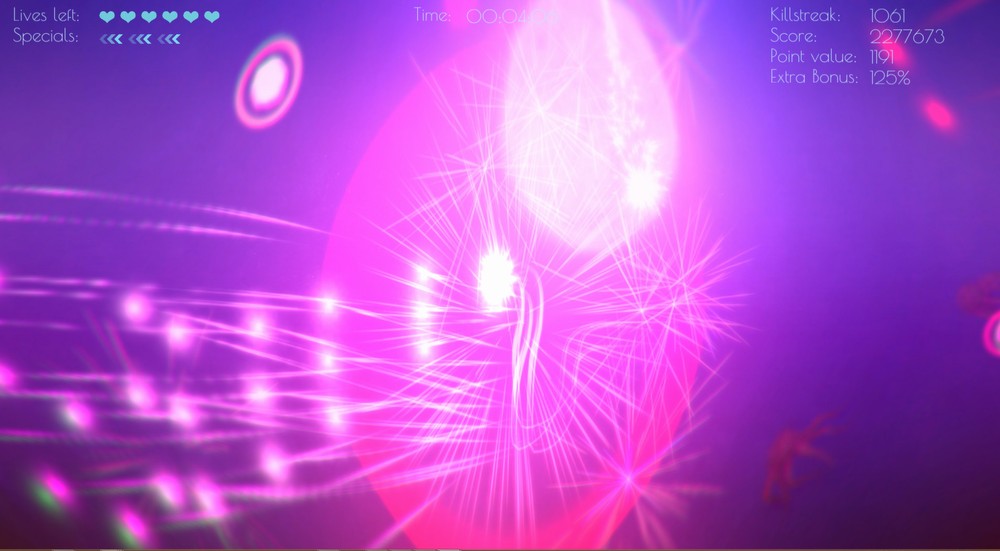 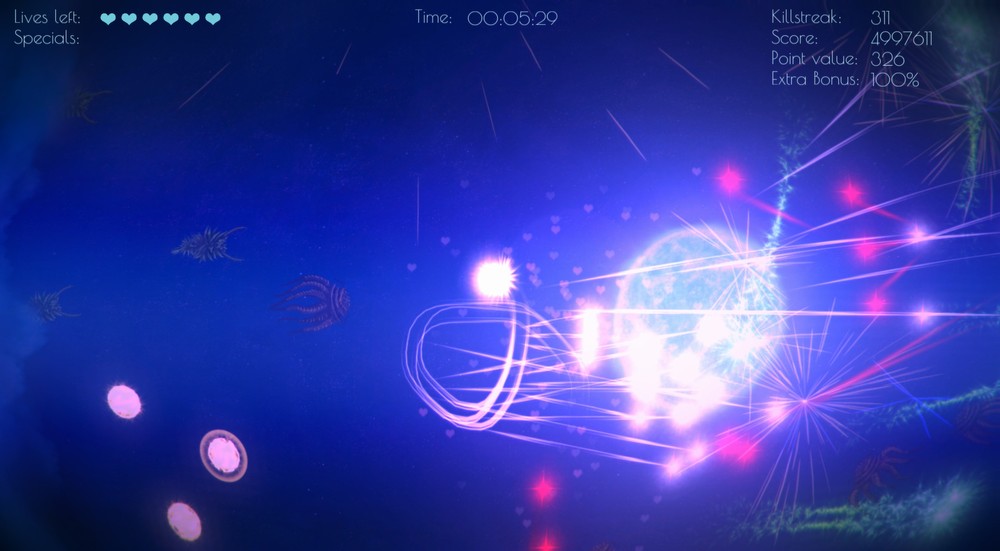 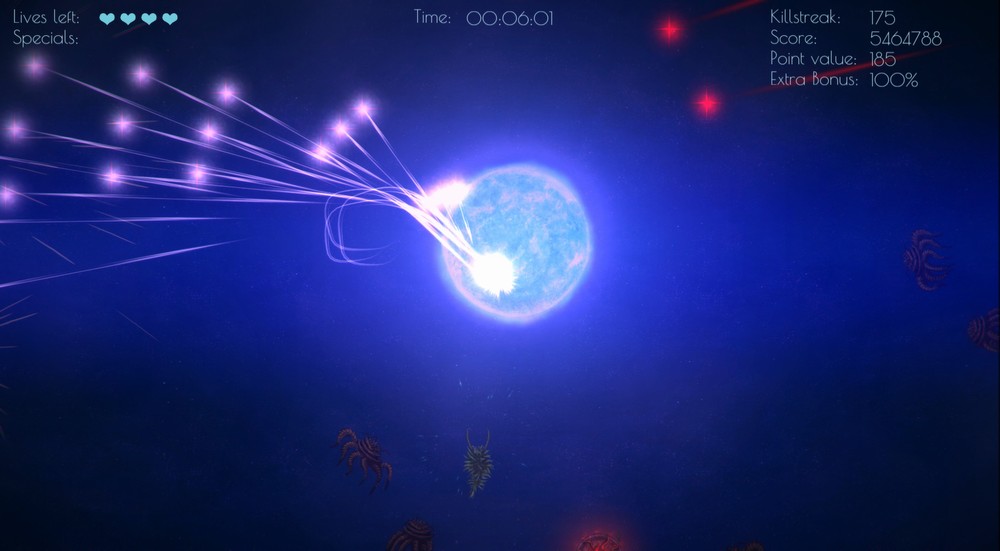 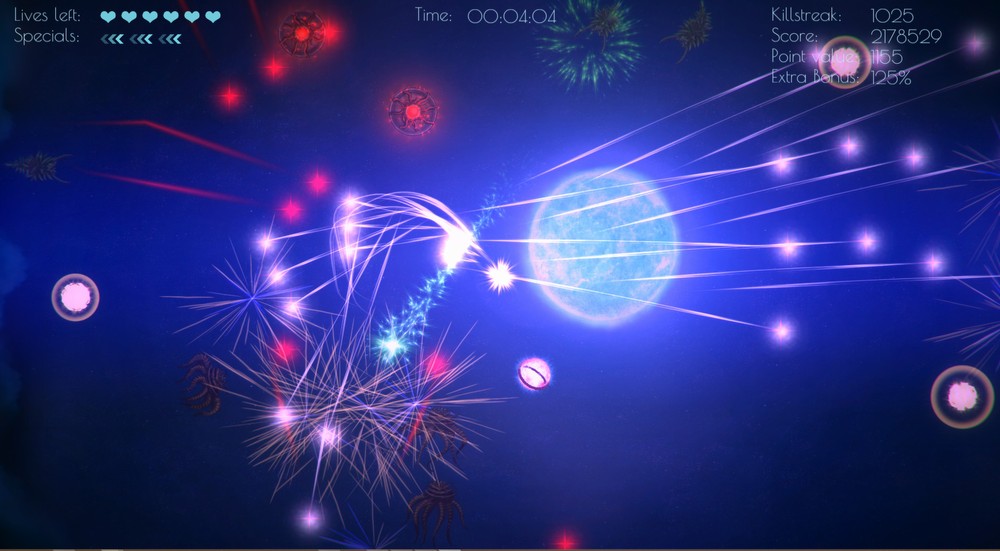