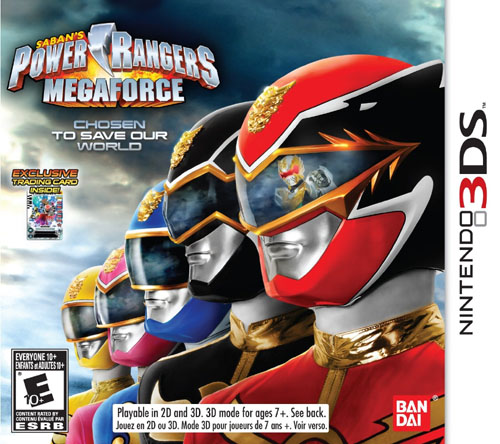 Teammates will not SHUT UP; Card Scan system is hard to use

Those words practically consumed my childhood growing up as I watched the original Power Rangers show. Like many boys and some girls, I even had a rather large collection of the memorabilia to go along with that obsession. The latest series Saban’s Power Rangers Megaforce marks both the 20th season and Anniversary of the long running franchise. Unlike some of my friends, I haven’t kept myself up to date on the varying themes over the years but the episode formula hasn’t really changed as I found out with the release of Saban’s Power Rangers Megaforce for the 3DS. 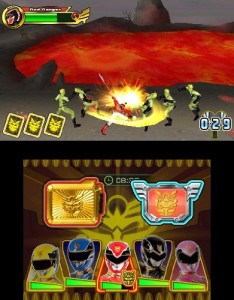 The entire main cast of Megaforce for the most part makes their video game debut in this side-scrolling adventure that plays like an average episode of the show. Only from my experience, the show was a lot more enjoyable and the team chatter didn’t break down to phrases like “Do I hear birds?” on randomized repeat. That’s not to say that Power Megaforce isn’t fun on a few levels as it definitely has its moments but there just seems to be too many issues in the system that may distract a player from beating the game. True fans of the Power Rangers can unlock the character skins for the original Mighty Morphin Power Rangers to use as a bonus thanks to the celebration of the franchise’s 20th anniversary.

The story of Power Rangers Megaforce takes place across 5 episodes each containing 6-7 levels ending in fighting the boss of that episode. The combat elements of the game are actually pretty fun for a beat’em up sidescroller and fans get to play as their favorite Rangers as you slash your way through waves enemies in classic form. That is when the game allows you to as you are routinely interrupted with text telling you to “collect all the Gosei medals” or “survive for so long” way too often. The survive under a time limit I can understand as its reminiscent of the show but do I really need to be told to collect medals that virtually impossible to miss during these times due to tight levels designs. It’s a given that this game is marketed to a younger audience, but I feel the conception and execution of the medal collection segments could have just of easily been integrated into the game without the need to tell you to do it.

The Rangers themselves offer the player slight variation in attack styles when in combat such as the Pink Ranger’s ability to jump higher than her teammates. She also takes damage more easily compared to the Red Ranger whose 360 swing attack makes him harder to hit. The nice thing is that you can switch between Rangers however if one is taking too much damage. This does tend to make the game fairly easy however even on the Hard setting. Another thing that I’m not overly found of is that the game will randomly switch out the Ranger you’re controlling at random which makes choosing a Ranger before the levels to be pointless. As a long time watcher of the shows that gameplay mechanic does show that the Power Rangers are about teamwork and not the acts of a single Ranger. 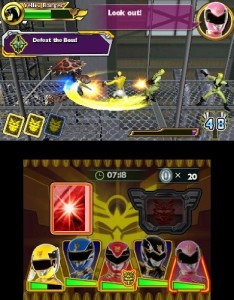 There are things in place to help you in your battles as you complete levels. You eventually get a Power Card back from the enemy to perform special attacks like sending out a blast of fire hitting anything unfortunate enough to be in its path at certain intervals. Executing these attacks requires you to pick up smaller cards found in crates or dropped as items from beaten enemies. You can even boost your attacks for a short time by the same means later on. You will also usually more than enough health pick-ups, depending on difficulty so failing is not something that I experienced more than a couple of times. The best part of Power Rangers Megaforce however is the ability to use the Megazord which to be honest was always my favorite part of the Power Rangers shows. The Megazord levels actually change up the gameplay as you have to utilize blocking, countering, dashes and attacks to defeat the boss including a finisher move like seen in the show. You can even play as the Rangers ally, Robo Knight in secret unlockable levels going up against various obstacles.

Power Rangers Megaforce may not have the greatest gameplay but at least it looks good for a TV show tie in. There are some low-resolution graphics that show up from time to time though the overall presentation is pretty good. As for using the 3D, Power Rangers Megaforce uses it only in the menus and in between missions. This is a growing thing that I’ve noticed though in the 3DS market so I’m not entirely surprised by this fact. That said its actually probably a blessing based upon the low end of the target age market.

Power Rangers Megaforce does have a couple of interesting features that utilizes the 3DS technology. The first is that you can take a picture of yourself so you can see yourself morph into your favorite Ranger before each mission which I’m sure young kids will absolutely love. The other is that this game incorporates the Power Rangers Action Card Game and you can scan cards to earn unlocks or power-ups in the game. The game comes with one card though actually getting it to scan by lining up the cards is almost impossible even in the best of lighting.

As much as I like the Power Rangers (totally love the Zords), Saban’s Power Rangers Megaforce is a somewhat decent attempt to capture the show’s apparent magic to stay on TV this long. The gameplay can be fun at times but there is too much going on that constantly spoils the fun and the voice acting while showing teamwork spirit was far too annoying. Saban’s Power Rangers Megaforce is game that I’m sure kids will love and just go with the motions but it isn’t one that I could recommend to someone even if they are a diehard fan. 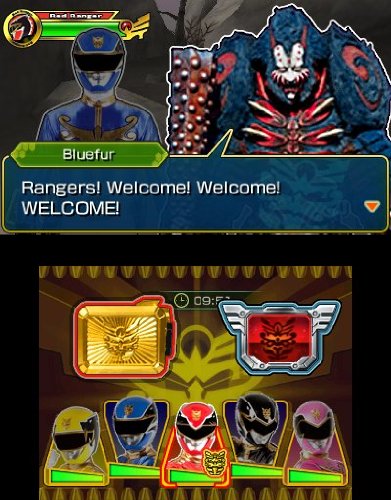 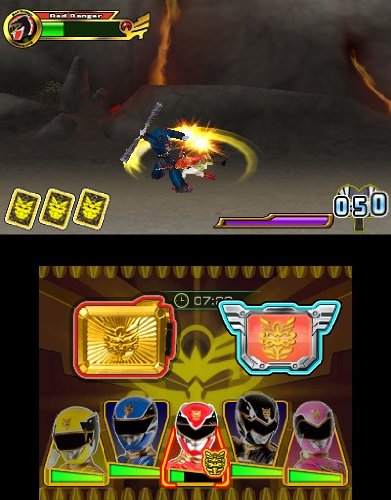 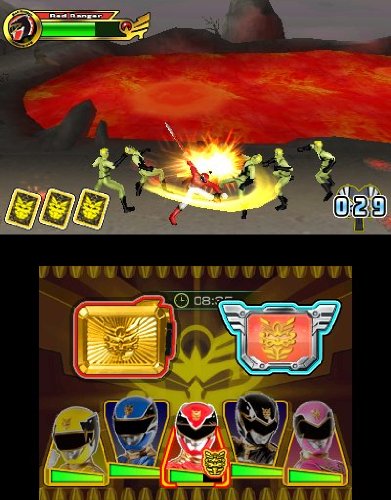 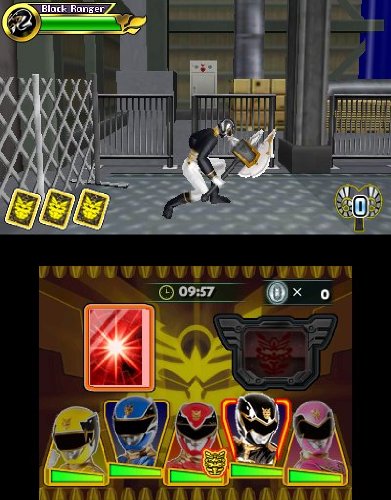 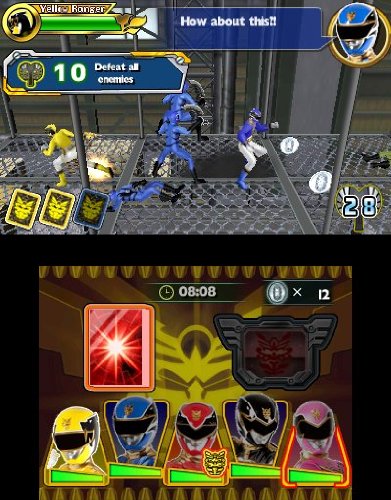 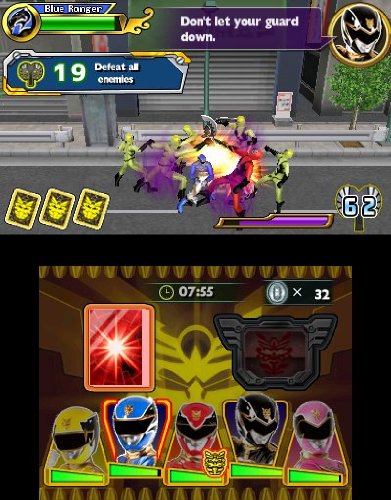 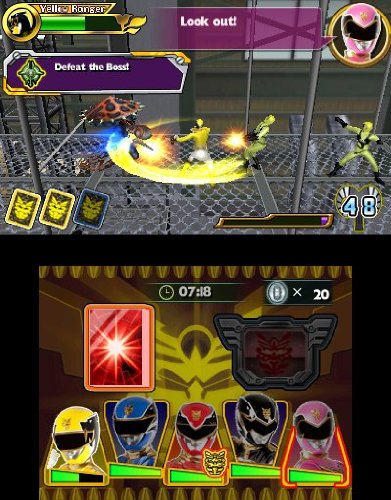 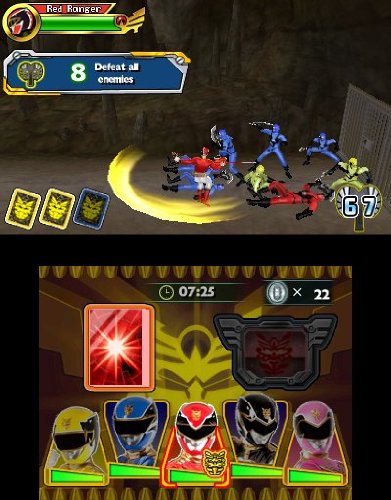