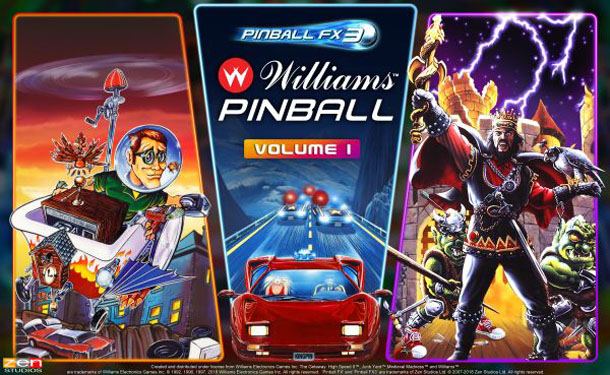 Great new tables and a significant update for the franchise.

If you are old enough to remember the glory days of walking into an arcade and seeing rows and rows of pinball machines then the Williams name should be permanently etched in your memory.  Williams was the premier manufacturer of pinball machines back in the day, so it should come as no surprise that Zen Studios is teaming up with these guys to resurrect the past and bring these tables to life in Pinball FX3.  The first volume features no less than four classic tables to add to your library along with several new enhancements to the game engine that pinball purists are sure to enjoy.

Perhaps the biggest change to the game is the new Classic mode, which recreates a perfect replica of the table as it existed in physical form.  This new mode strips away all the glitz and modern effects we’ve come to associate with the Pinball FX franchise, making for a simpler more retro pinball experience, even to the point where you can now pan the view up to the rear display of the table to appreciate the artwork.  While this new Classic mode is perfectly implemented in this latest set of tables the mode also now exists for all of the other tables in the Pinball FX3 library, effectively stripping away the 3D models, holograms, and floating score numbers that float over bumpers, targets, and spinners.  To help incentivize players to revisit all their old tables in Classic mode, Pinball FX3 tracks a whole new set of high scores as well as tallying up a new Wizard score.

While the most significant change might seem to strip away all the visual flair and fun rest assured that the remastered versions of all the tables in this set come to life with animated 3D figures, enhanced lighting, reflections, and particle effects, and gorgeous textures.  The designers have also created a new PRO Physics simulation that makes these some of the most realistic playing tables ever, enabling tricks such as Live Catch, Flick Pass, Bangbacks and more.  And for those seeking the ultimate in realism, a new International Flipper Pinball Association style mode with extra difficulty has been released for the Williams tables. This ruleset is true to form for tournament play according to the IFPA ruleset.  Also added is the post-game “match play” where you try to match the last two digits of your score with a randomly generated number to “win a free game”.  It’s a nice touch of retro realism in an age where games no longer take quarters, yet curiously in over 100+ games played I have yet to match, so maybe this is an insider joke.

Pinball FX3 – Williams Pinball: Volume 1 bundles four tables, one of which is fully unlocked for free so you can get a taste of what’s new with this substantial update.  Fish Tales is the freebie and is surprisingly fun with its hillbilly-style music and an easy-to-trigger multiball.  The remastered version adds some 3D animated enhancements that liven up the experience as you go for that Monster Fish bonus or activate the Video Mode where you can torpedo boats on the lake. 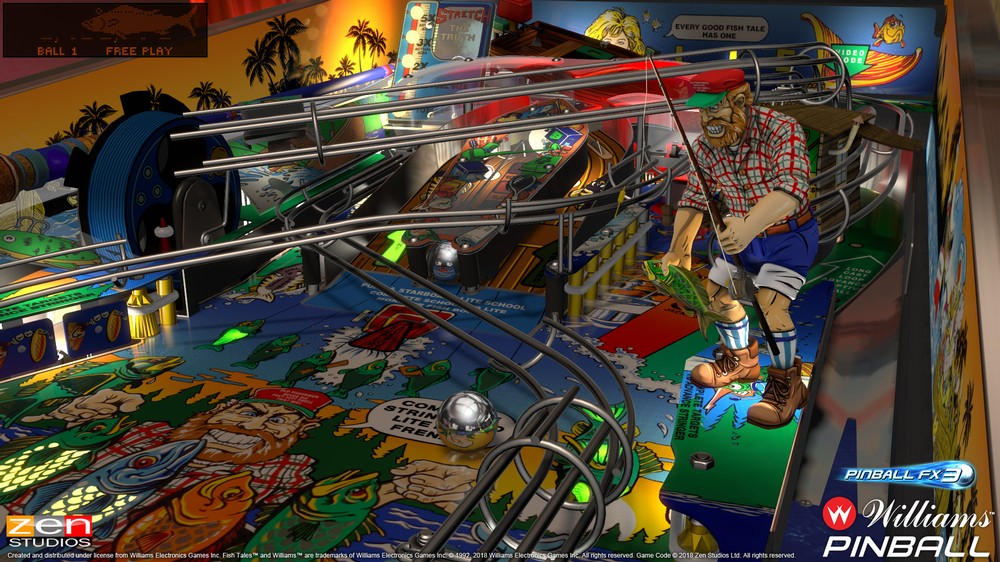 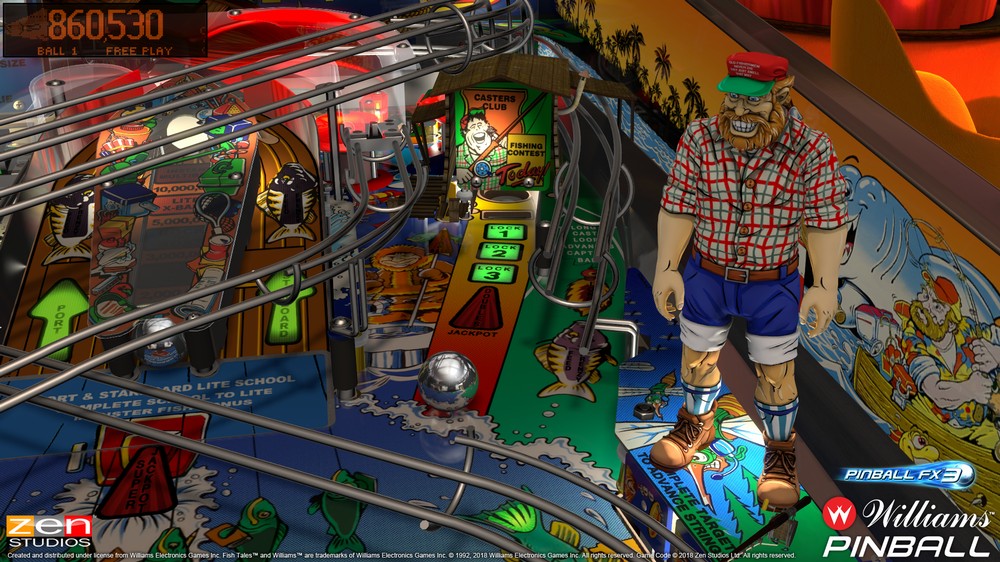 The remaining three tables are bundled together for $10 and cover a wide variety of themes and gameplay styles starting with Junk Yard, a table that has you collecting specific pieces of junk as you shoot targets including Spike the dog, ride rails and elevated platforms, or shoot the crane to activate an insane multiball experience.  There is a fun dangling wrecking ball at the top of the table, and you can even collect fireworks that will launch you into space for an epic boss fight with Crazy Bob.  The Classic version of this table is awesome, but the remastered version adds nearly a dozen 3D objects and new art. 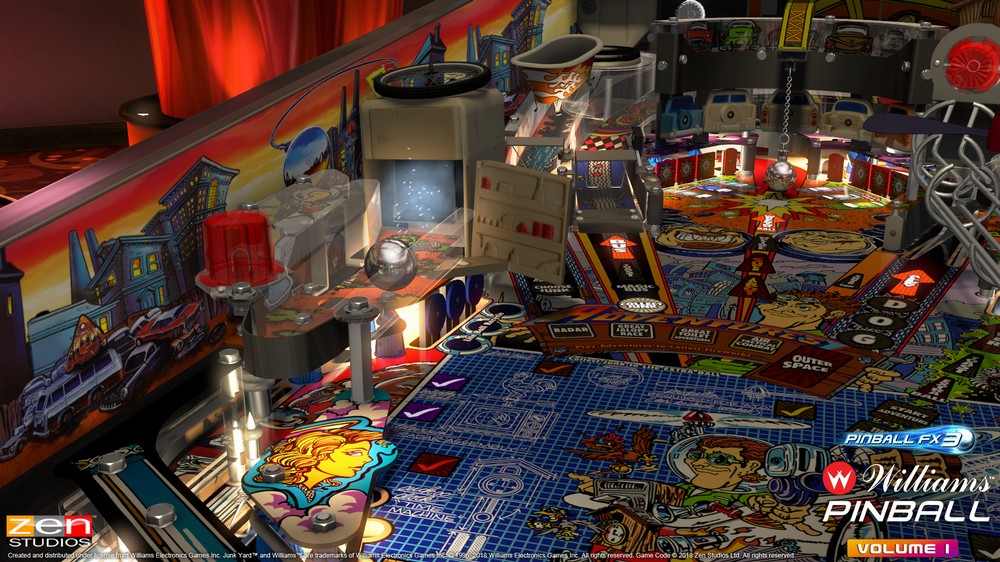 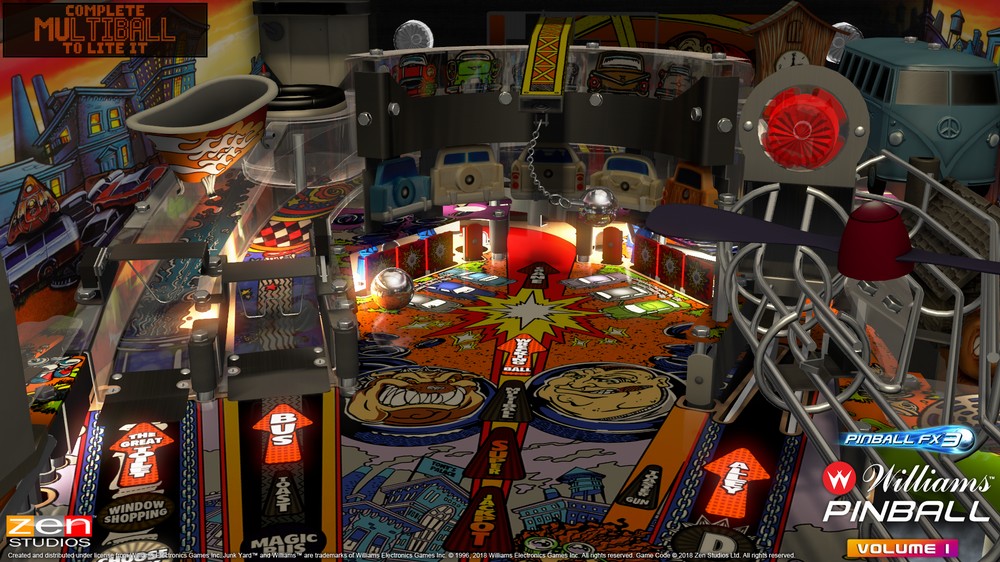 The Getaway: High Speed II has some of my favorite art and one of the best table designs in this bundle, and when combined with the ZZ Top-inspired music puts this table at the top of my list.  The ball lock and multiball is fairly easy to engage providing lots of chaotic gameplay as you collect jackpots and outrun the police.  The remastered version of the table kicks things up a notch with a 3D cop and animated police car driving around the table. 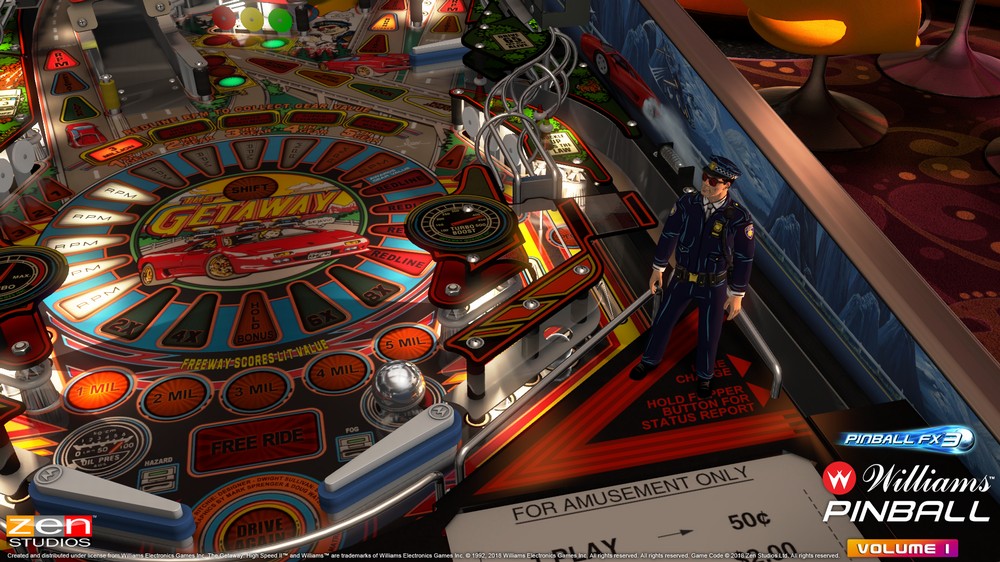 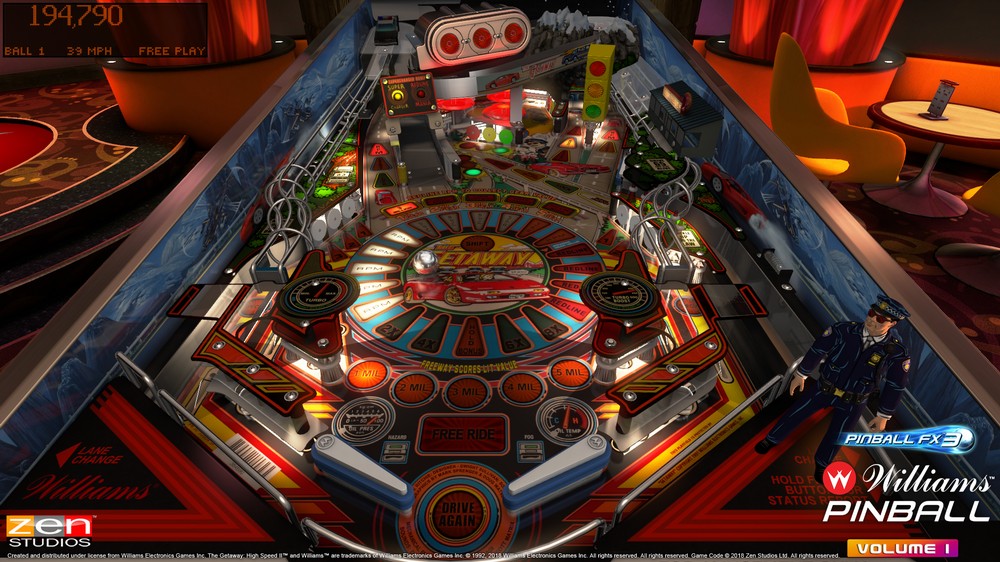 Medieval Madness is another shining example of classic pinball with fantastic ramps and chutes that make the most from the single pair of flippers as you target the Baron’s castle and try to destroy it.  If you can get three balls locked in the castle you trigger another great multiball experience to boost those scores.  Playing the remastered version of this table brings the fire-breathing dragon to life along with an animated catapult and realistic castle destruction. 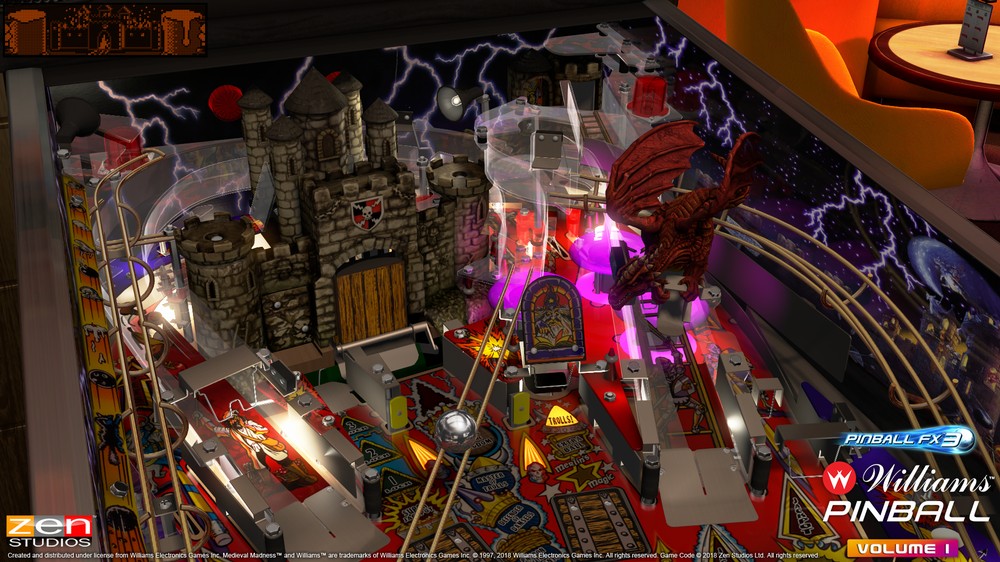 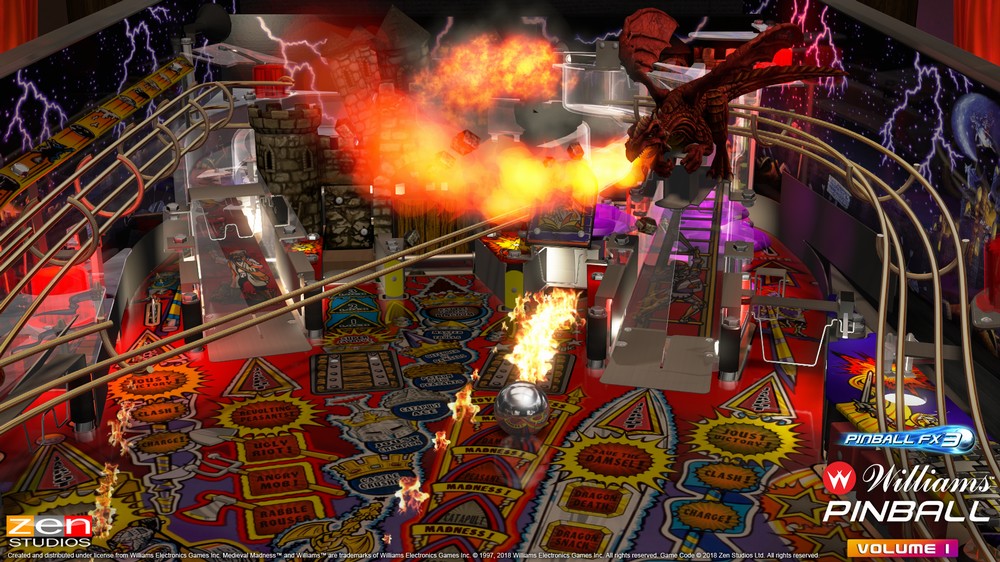 Even as a more casual pinball player I can certainly appreciate the new features and enhancements that are adding a new level of optional realism and simulation to the Pinball FX3 engine.  Tournament players and pinball purists are sure to enjoy the IFPA ruleset and the new PRO Physics update while everyone can enjoy the cleaner Classic mode that won’t overwhelm you with distracting models and effects.  This is truly a significant update for the franchise.

Considering that the original release dates for all these tables were all during the years I was spending hours per day in the arcade I was surprised I had never heard of any of them.  I certainly look forward to more volumes in the Williams Pinball franchise with hopefully a table or two that I might have played in the past, but until then I’ll be enjoying countless hours with these new tables and replaying my entire library in Classic mode.

1
1028
The Walking Dead: Saints & Sinners Review – Oculus Quest
2
834
The Falconeer First-Look Preview – PC
3
834
Werewolf: The Apocalypse – Heart of the Forest launches on October the 13th
4
833
Join the Galaxy’s Finest as Star Wars™: Squadrons Soars Into Homes Today
5
833
Metamorphosis is 33% Off on Steam!
6
833
Synth Riders Celebrates Anniversary with a Month Full of Treats and an Oculus Ques...
7
833
Worm Jazz Review – PC
8
833
Take to the Skies and Choose a Side in the New Trailer for Next Generation Air Com...
9
833
CRASH BANDICOOT 4: IT’S ABOUT TIME IS AVAILABLE NOW
10
833
Frictional Games Shows Off First Gameplay Footage of Amnesia: Rebirth
All Original Content on Game Chronicles is Copyright (c) 2002-2020
Sinjin Solves Walkthroughs Copyright (c) 1996-2020 by Mark Smith