The best pinball game the PS4 has ever seen

I’m a huge fan of pinball; both the real tables and the video game simulations, and when it comes to the latter it just doesn’t get any better than the pinball games from Zen Studios. I’ve been playing their various iterations on PC, Xbox, and PlayStation from the beginning, and I continually look forward to each and every new table release, but with recent changes in technology and console hardware the core engine that drives these tables was starting to show its age.

Welcome to Pinball FX3, the third and latest generation of pinball that is not only going to take your existing table collection into the future, but also serve as the base for all new tables moving forward including the new Universal Classics Pinball. Pinball FX2 was already a pretty polished piece of software, so it was hard to imagine things could get any better, but little did I know what surprises Zen Studios had been cooking up in their pinball kitchen. 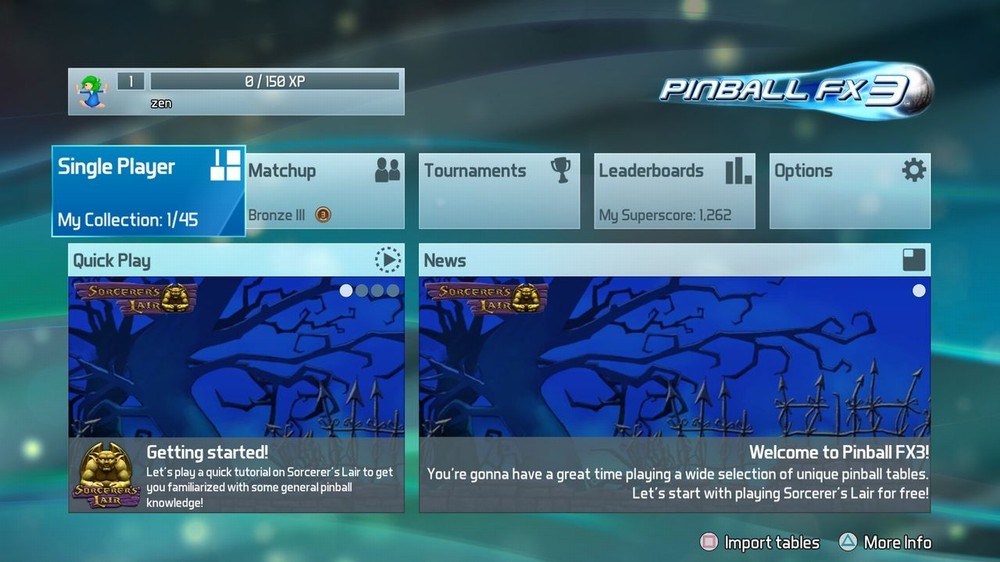 Pinball FX3 is more of a platform than a standalone game, which explains why it is FREE in the PlayStation store. They are even throwing in their classic Sorcerer’s Lair table for free, so first-time players have something to play. For veterans, you’ll be happy to know that nearly all of your existing tables will automatically import into Pinball FX3 – 65 in total. As someone who owns all 65 tables I would have enjoyed a more streamlined approach to this import process, as it took considerable time to work my way through my collection, downloading one table at a time from the PS Store.

Over the years, as my table collection grew, I was desperately hoping for a better way to organize my library, and Pinball FX3 does just that with their new My Collection screen that sorts and presents all the tables from various themes and collections in their own selectable groups. It’s a fantastic way to quickly navigate a large library while keeping the thumbnails large enough to read. Even more impressive is that when you select any of the tables from the grid the animated background art updates to reflect that table. I simply love how easy it is to find and play a table now, and this will only get more useful as new themes and tables get added to the library. You can even mark certain tables as favorites for even quicker access to the tables you play the most. 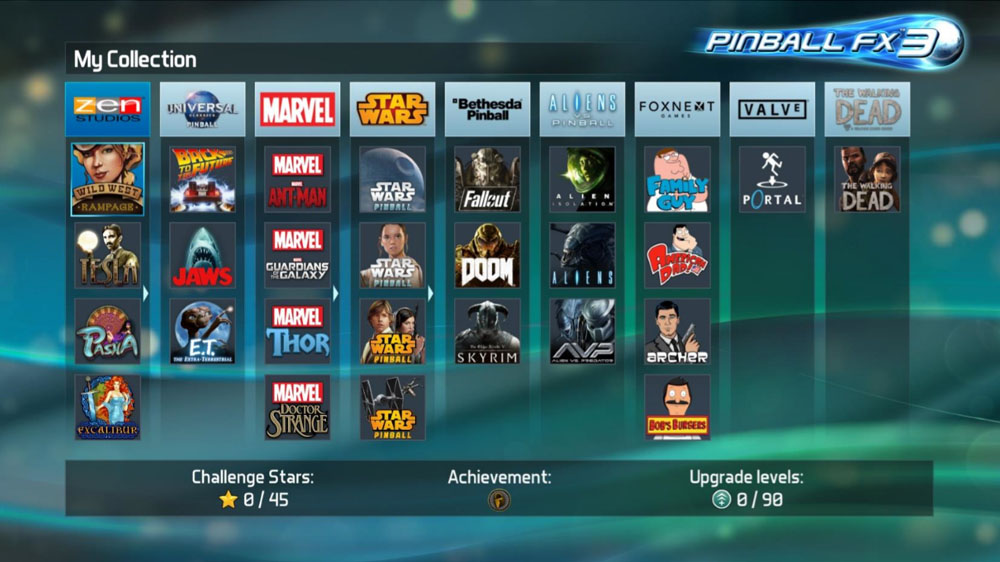 Pinball FX3 not only updates the pinball content, it also delivers new and exciting ways to play pinball, both solo and online. Before, there was only one way to play pinball alone, and that was just going for the high score. Now, there are six modes including the 1-Ball Challenge, 5-Minute Challenge, and Survival Challenges where you can earn up to 15 stars per challenge. There are also upgrades including unlockable Wizard powers and passive upgrades that can be leveled up through skill proficiencies. These upgrades can lengthen ball saves, extend the combo counter, or boost target or multi-ball multipliers.

There are also 200 mastery points for each table you own. There is so much new content, perks, and skills to track it’s almost overwhelming, and for pinball purists who don’t want all this “unrealistic stuff” simply choose the Classic mode to disable all these extras. For those who enjoy the new content there is a fantastic opening tutorial to guide you through the new features and pop-up help and explanations on every info screen. 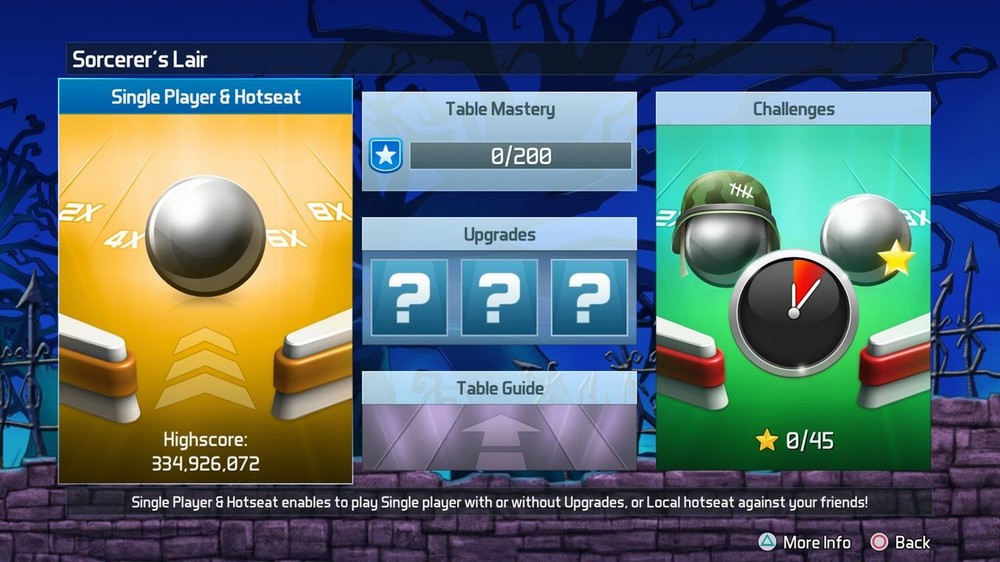 Going online gets you access to non-stop tournament play with the ability to play and create your own custom tournaments using any of the new game modes.   Purists can still engage in classic 3-ball high score tournaments but for those looking to mix it up, tournaments have been greatly expanded. Zen Studios is also doing featured tournaments with real world prizes, so start flexing those flipper fingers.

There are also Multiplayer Matchups where the system will match you with opponents based on your current skill level. These matchups are based on ongoing league groupings, so the more you play each week the more opportunity you have to earn league points and rise through the ranks in League Play. 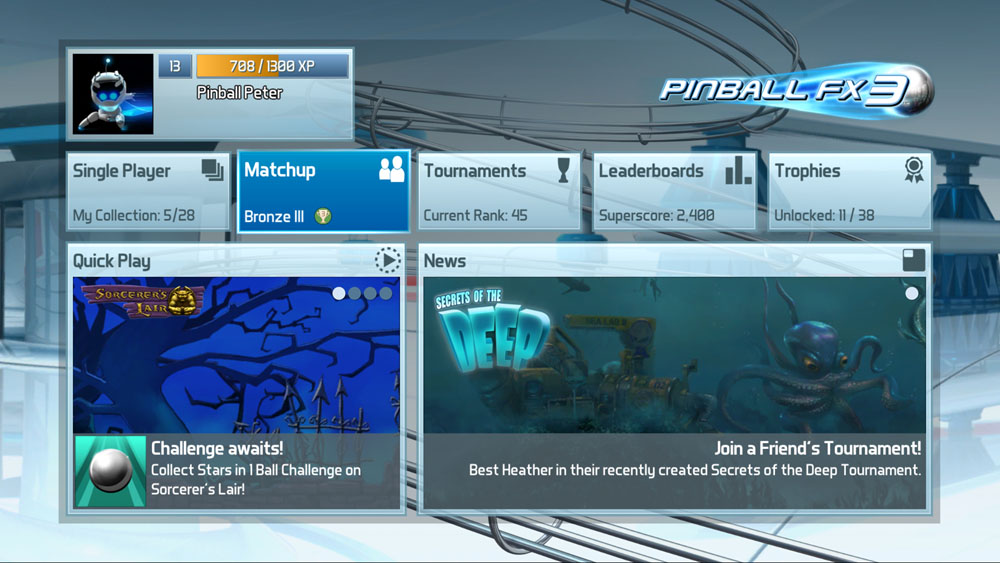 Whether you play alone or online you now have ongoing progression with player XP that allows you to level-up your profile and unlock visual bonuses like background art and avatar frames. As always, you have table-specific leaderboards as well as your Super Score and other ways to track your progress overall and per table.

The new engine in Pinball FX3 is outstanding and my PS4 Pro is cranking out 4K pinball at silky smooth frame rates. Before, there were always a few of the eight camera views that would stutter, but now I can play from any view I want with no hiccups in the panning or zooming. The ball is fast and fluid and now features real-time reflections from its surrounding and even casts a shadow, and the flippers are super-responsive.   I’m already setting new high score records on some of my favorite tables just because the game plays so much better. My only minor quibble is that they got rid of the 3D support. Admittedly, 3D is on the way out, but Pinball FX2 in 3D was always one of my favorite 3D showoff titles. But with the improved resolution and texture quality these tables almost look 3D; even in 2D. 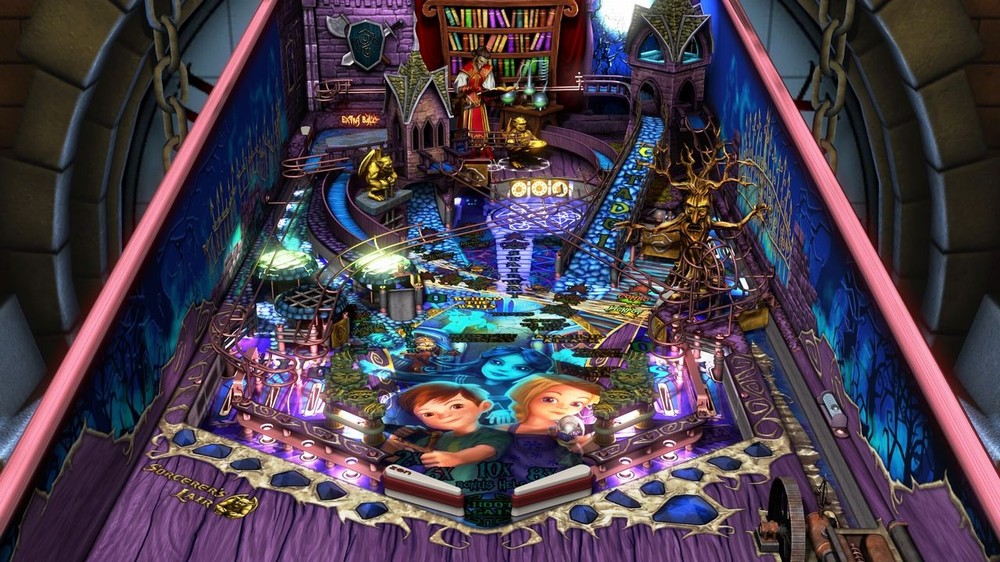 The audio is fantastic with great sound effects and music for both the launch platform and all the tables. I was pleased to see there is a Licensed Music toggle that will disable any licensed music when you are streaming the game. This is a great feature that will keep John Williams’ lawyers off your back when you are streaming a Star Wars table as well as avoid any YouTube or Twitch copyright hassles.

Pinball FX3 is a must-own game for anyone who even remotely enjoys pinball. It’s a free platform with a free table and if you own previous tables you are going to get those imported for free, so there is absolutely no reason not to get this. While Zen Studios is relying heavily on their back catalog of tables to keep momentum, their new Universal Classics Pinball is truly an amazing three-pack of next-gen tables that are far more advanced than anything we’ve seen so far, but we’ll be discussing those in a separate review.

So go download Pinball FX3 and start playing the best pinball game the PS4 has ever seen. Zen Studios has crafted a masterpiece delivery system of quality themed pinball tables with so many ways to play alone or with others. Your quest for high scores is a mere afterthought in what has now turned into an epic challenge of mastery of all things pinball.