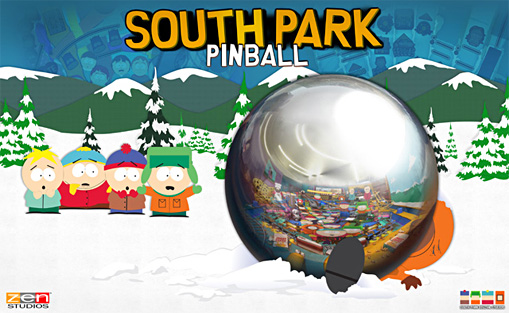 Some of the dialogue gets repetitive

No South Park fan should miss out on these two awesome tables.

Zen Studios keeps cranking out the hits when it comes to DLC tables for their highly enjoyable and totally addicting Pinball FX 2 game for the Xbox One. This time they are taking on those adorable scamps from South Park Colorado in a two-table pack that features South Park: Super Sweet Pinball and South Park: Butters’ Very Own Pinball Game.

Both of these new tables exemplify the very essence of South Park with bright bold colors and 3D constructs for the various thematic elements from the show. Zen is known to throw in some 3D animated character models in their licensed tables, but seeing as how this show is created from virtual construction paper they do a great job with 2D characters that pop-up much like a shooting gallery target.

First up is the Super Sweet Pinball table that encompasses the entire cast, as well as key locations from the fictional city of South Park. In a classic spoof of the O.J. Simpson chase episode Kenny rams the ball into action from the highway launch chute right into a miniature South Park Cows football field where you try to keep the ball in play for as long as possible with dedicated flippers.  Eventually the ball will drop down onto the table where you will find plenty of ramps, targets, bumpers, and lanes that all relate to various characters, and moments pulled from episodes of the long-running series.

The one thing I loved (and hated) about this table is that for the first time Zen Studios is making some interesting use with the vertical back panel of the pinball table, which features a large movie theater screen with always-changing images, based on your current goal in the game. The sad thing is that there are only two or three camera angles that actually give you a good view of this back screen, and none of those are particularly good for playing pinball due to their low angle that makes it way too easy to lose track of the ball.  I was really torn between playing from the 1W view to see all the content and playing from view 5 or 6 where I can actually get high scores. 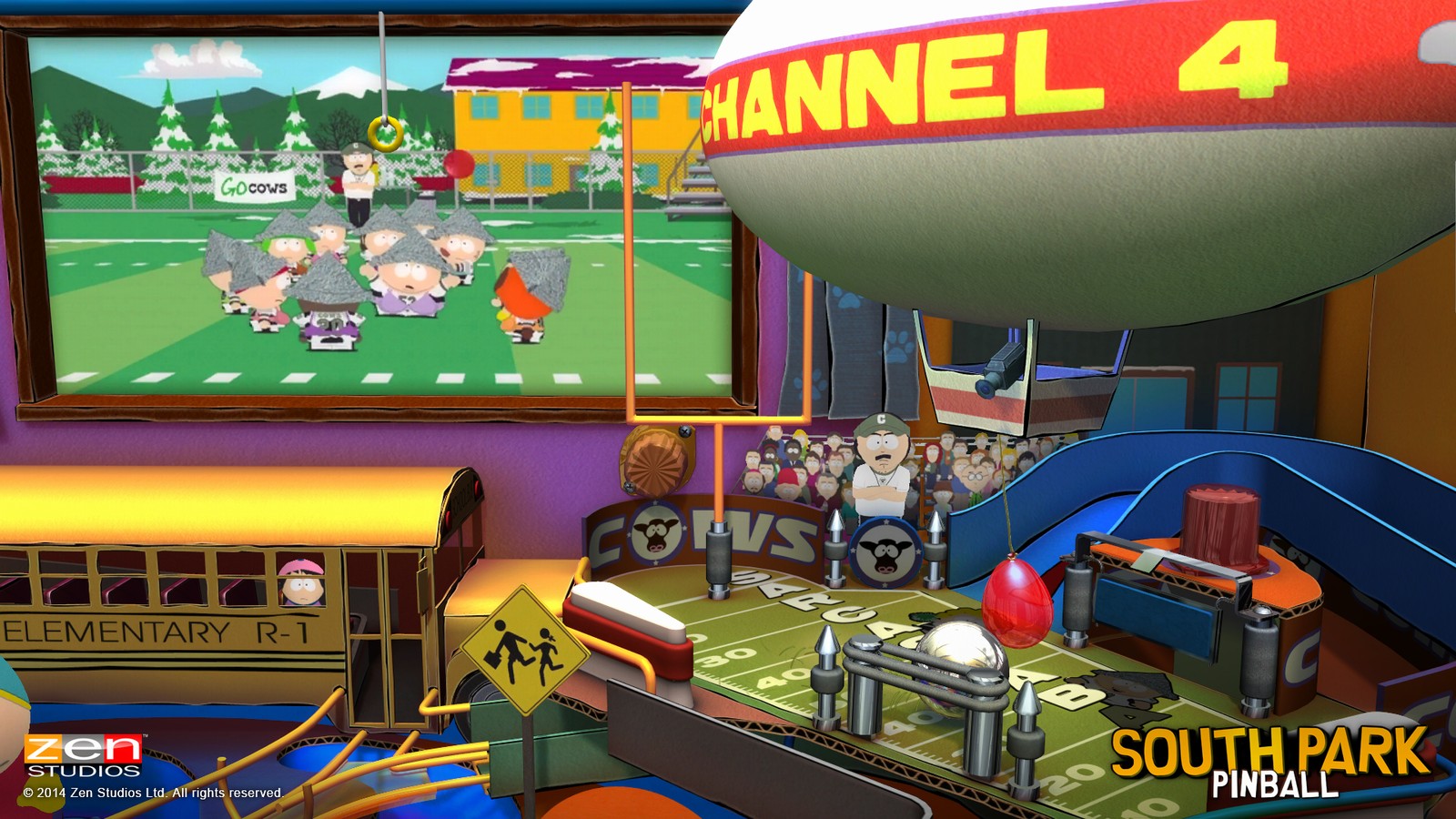 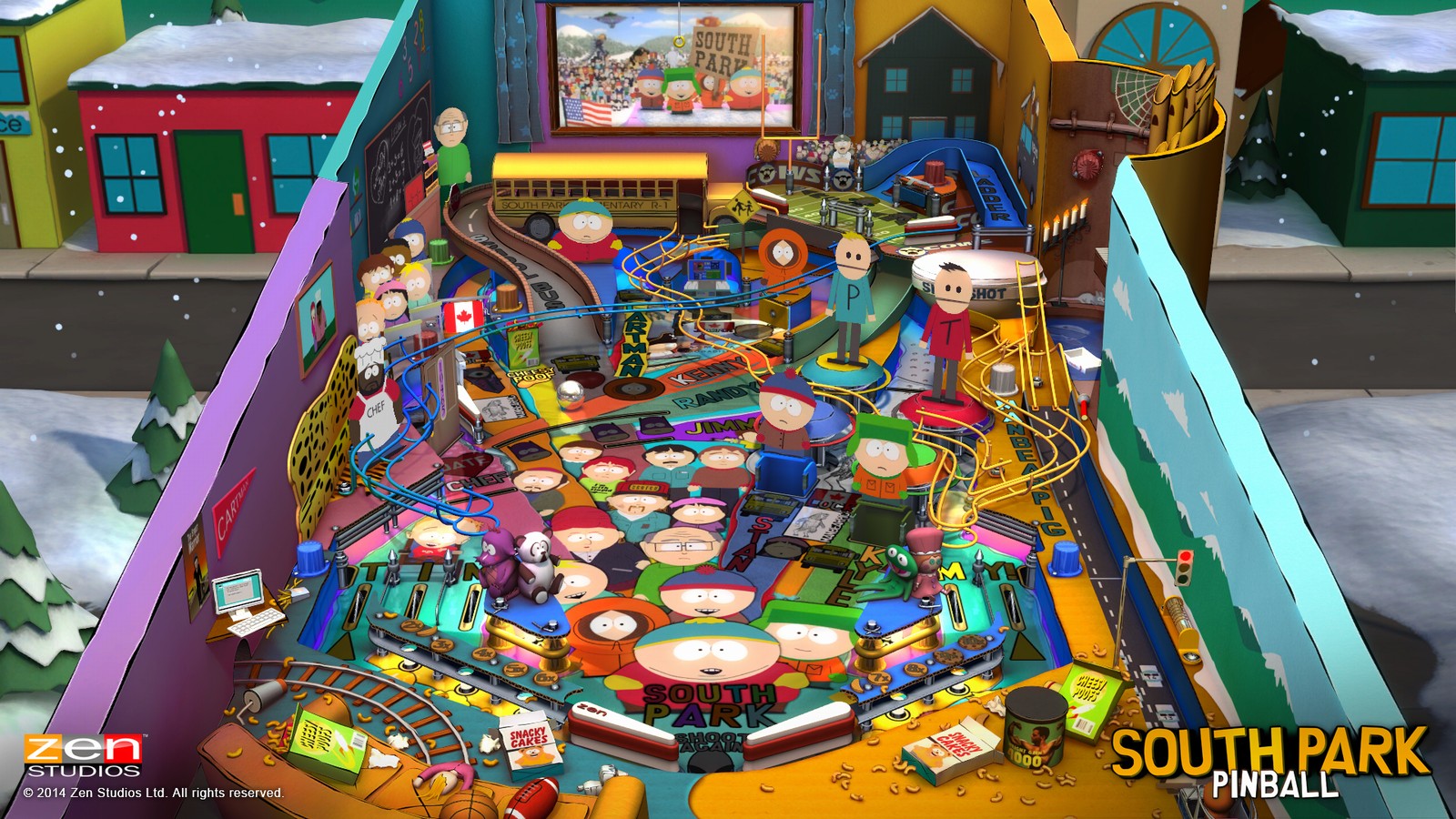 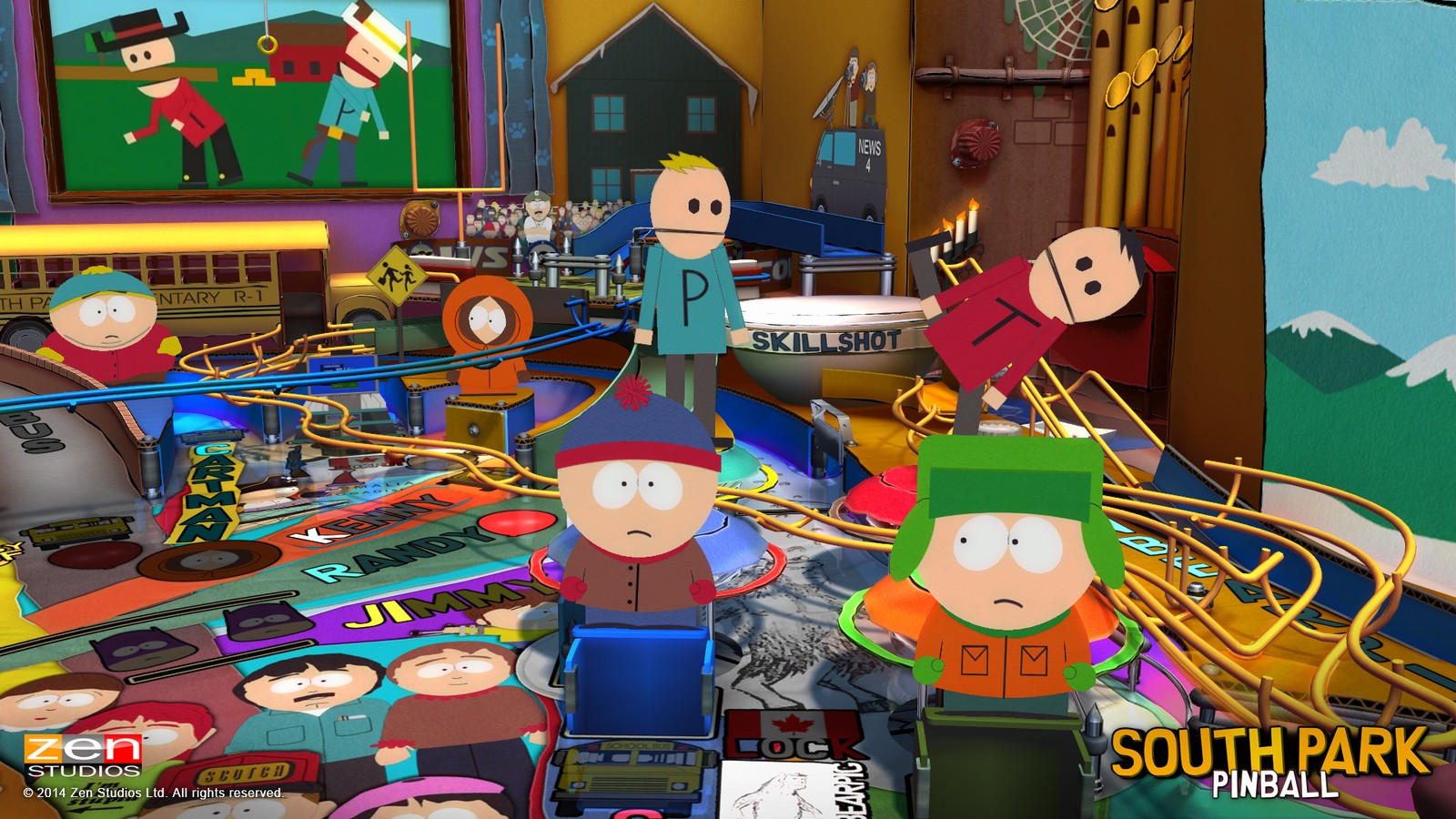 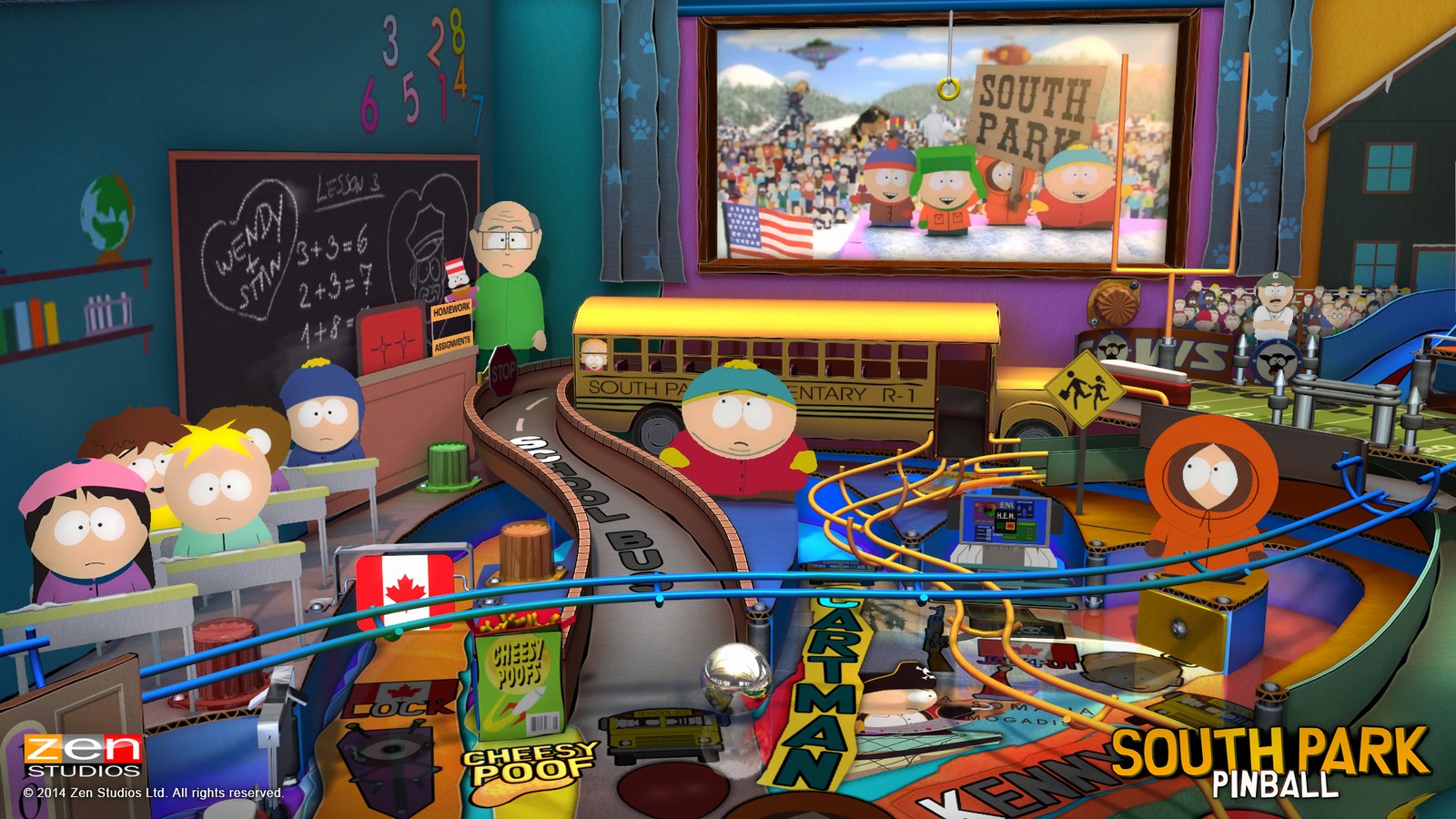 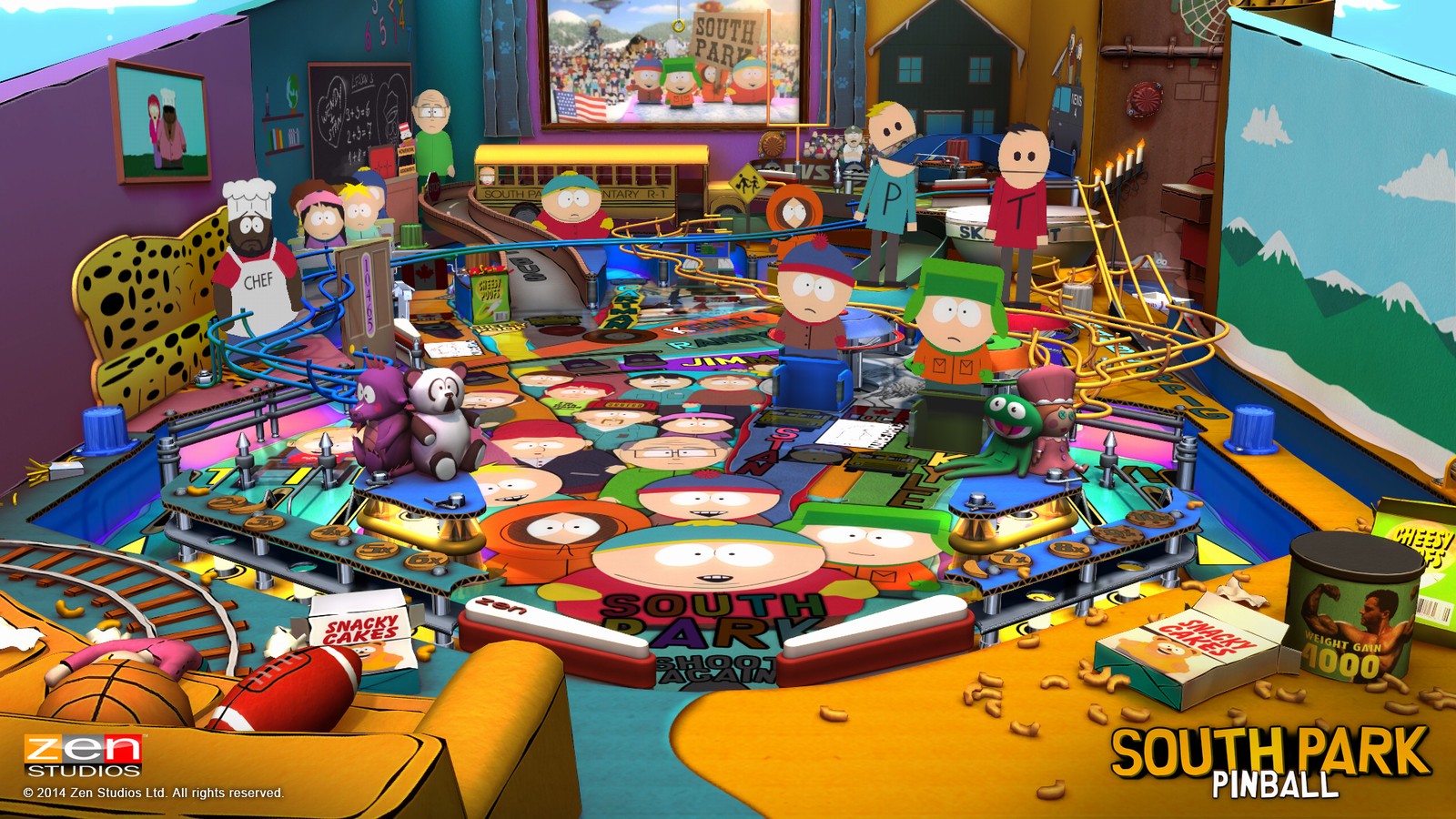 If you are wondering why Butters got his own table then you haven’t been watching the recent seasons of the show. Butters is the breakout character of the cast, even achieving his own dedicated episode, so having South Park: Butters’ Very Own Pinball Game was only logical.   His table is a bit simplified but no less elegant with plenty of gold rails that elevate the ball above numerous ramps and curved lanes that all lead to targets and mission goals.  While all of the content is centered on Butters the rest of the cast makes frequent cameos in homages to episodes dealing with Professor Chaos, the Coon, the one where Butters infiltrates the girls slumber party to steal their “future telling device”, and my personal favorite, Good Time With Weapons.  Professor Chaos even gets his own mini-pinball table if you can manage to trigger it.  Butters is such a central character to the show now that they could have easily created two tables worth of content. 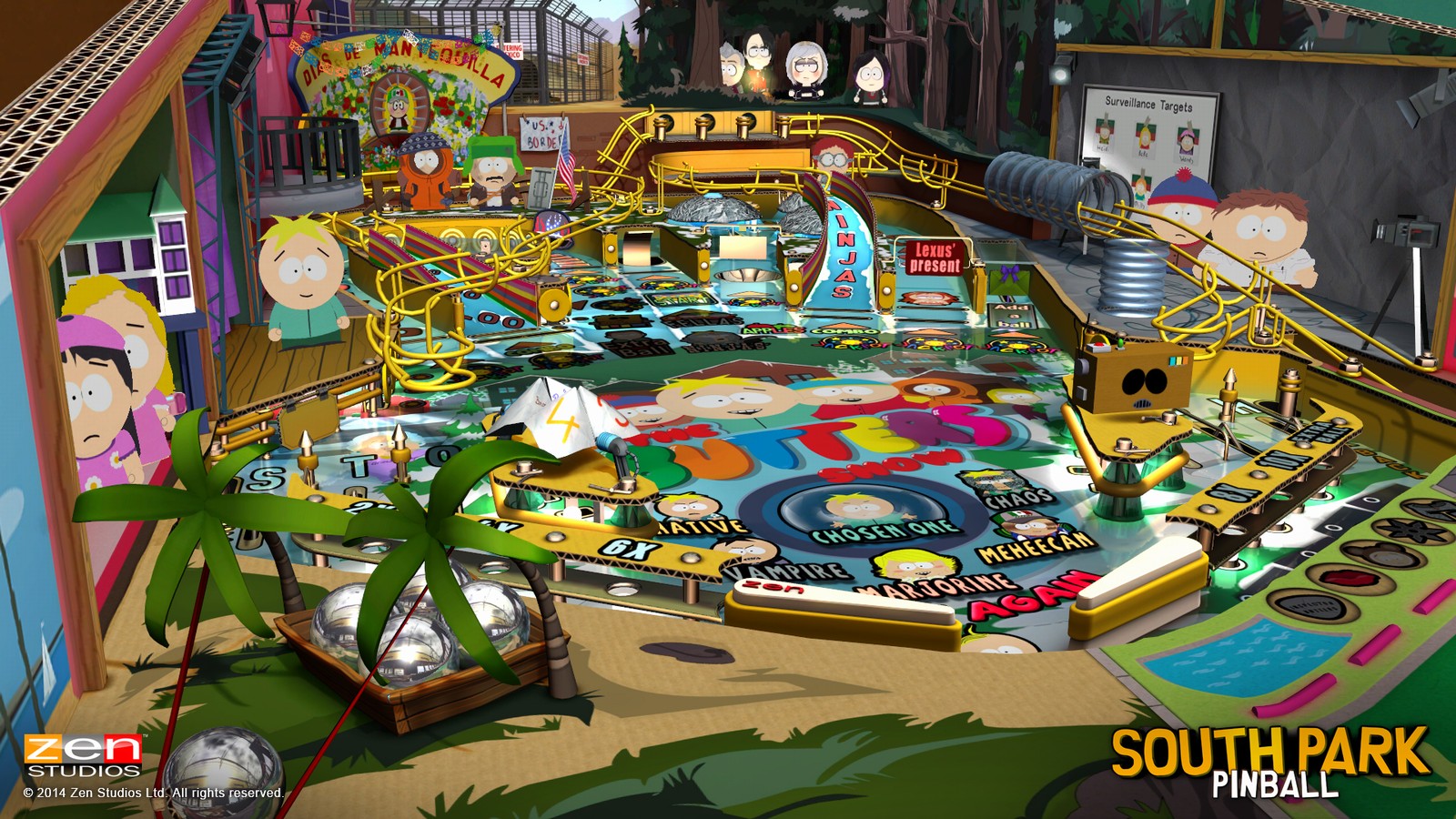 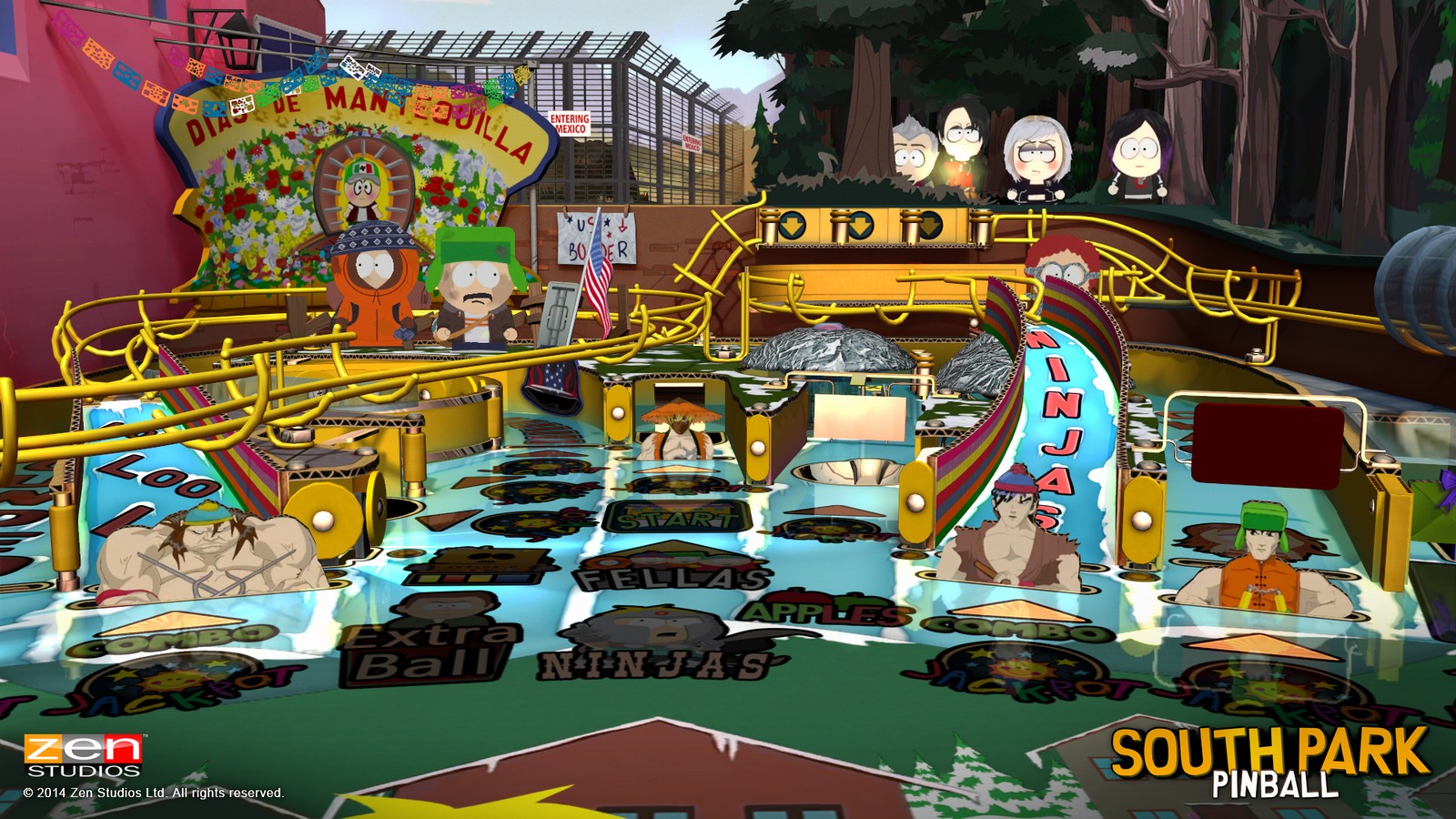 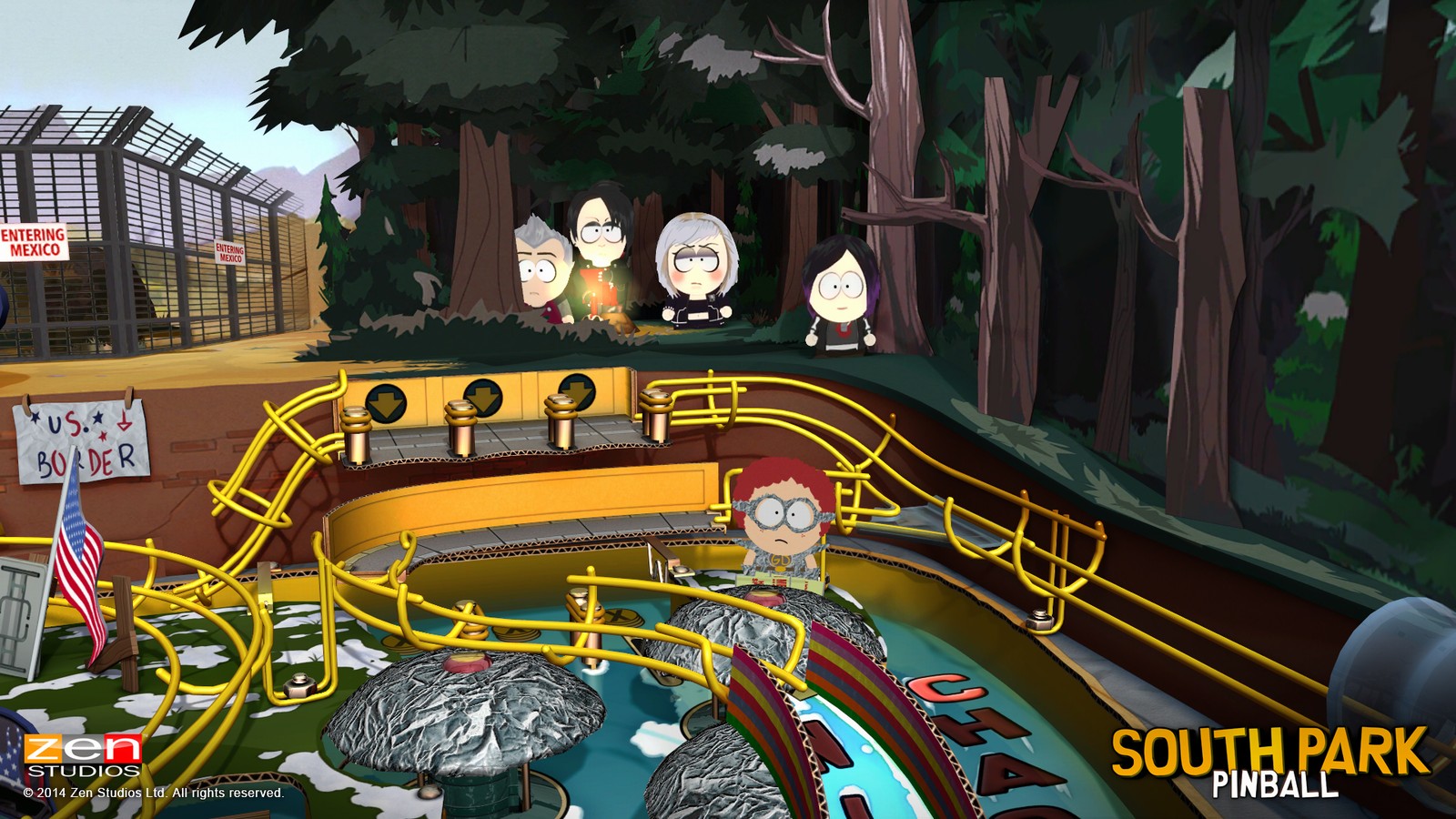 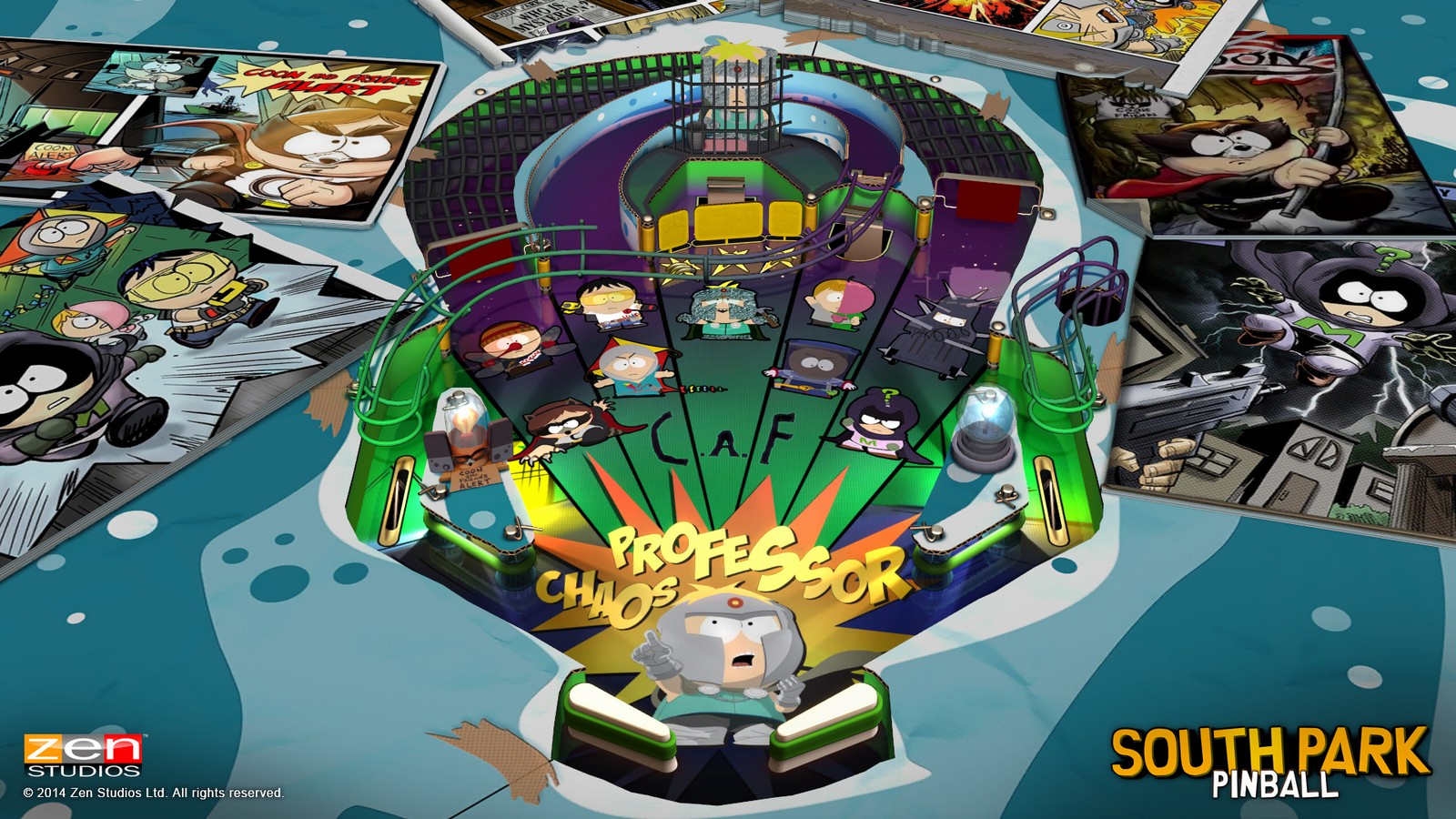 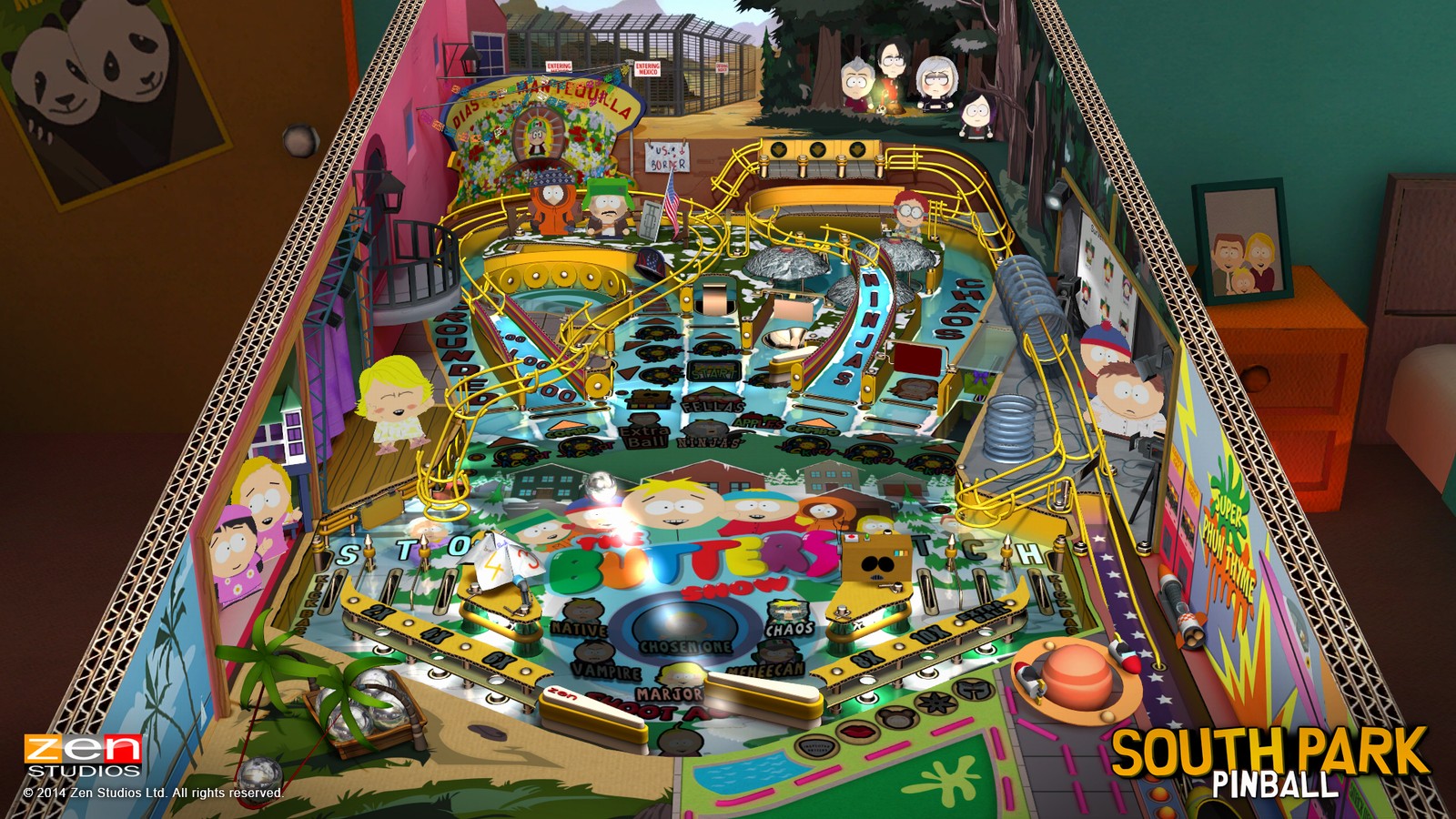 Both tables are loaded with sound clips from the show including favorite lines from Chef, Crabtree, and Mr. Garrison as well as all the boys and girls. Admittedly, some get very repetitive, especially on the Super Sweet table where it is entirely too easy to keep dropping the ball in Stan’s blue chute triggering the same lines and romantic music cue.  But as someone who has seen every episode of South Park at least 4-5 times I am no stranger to repetition and these tables always put a smile on my face.

As mentioned in past pinball reviews, Pinball FX2 seems to play just a tad better with smoother table panning and more responsive flipper action on the Xbox One versus Zen Pinball 2 on the PS4. One thing I did discover is that the flipper response is entirely dependent on the controller.  I started playing this game using my new Call of Duty controller (the one with gray body and gold trim) and there was massive flipper delay using the triggers or the LB/RB buttons.  I switched back to the controller that came with my system and all was perfect again.  Perhaps playing pinball and killing terrorists requires a different response time.

Aside from that issue I loved the new South Park pinball tables on the Xbox One, and I continue to appreciate the custom interface that groups the tables into panels by bundles and puts all the newest downloads front and center in my side-scrolling menu for easy access.

Make no mistake about it – The Walking Dead table is still my favorite pinball table to date, but South Park makes a valiant effort to unseat the reigning champ, and if you love South Park more than The Walking Dead this latest two-pack could easily become your favorite. Zen Studios has once again taken everything we love about a licensed property and somehow managed to turn it into a fun and addictive game of pinball.

You can checkout my live gameplay video or better yet, just go to the marketplace and buy these tables now.

Now if you’ll excuse me…I need to clean the Cheesy Poof crumbs off my controller.