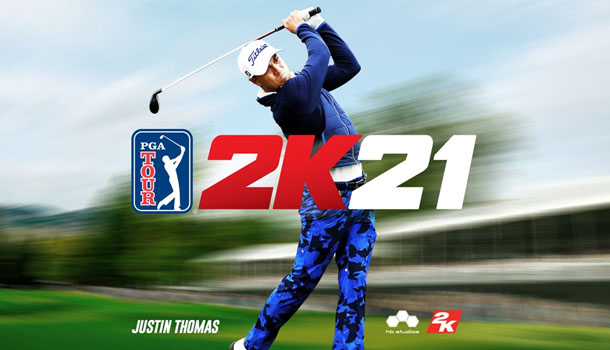 One of the best golf games I’ve played in years.

It seems like an eternity since we’ve had a AAA golf game.  Sure, I’ve been playing Everybody’s Golf on PS4 since it launched in 2017 but before that I’d have to go back to 2015 and Rory McIlroy PGA Tour, and as far as reviewing a golf game I’d have to go back to Tiger Woods PGA Tour 14 released in 2013 on the Xbox 360.  In 2014 HB Studios released The Golf Club; a unique hybrid of hardcore sim combined with a full-featured course creator.  While the game lacked the polish and flair of past golf games it did see some success being the only game in town.  The game got a VR installment and in 2018 secured the licensed PGA Tour career mode including many favorite courses and presentation trimmings associated with the FedExCup.

For this latest release PGA TOUR 2K21 puts the PGA license front and center, moving references to The Golf Club in the fine print, but those familiar with the original game will certainly recognize all the fantastic features and ultra-realism built into the game along with that awesome course creator and of course the unforgettable voice of John McCarthy delivering his signature commentary, this time joined by some professional sports announcers when actually playing Tour events. 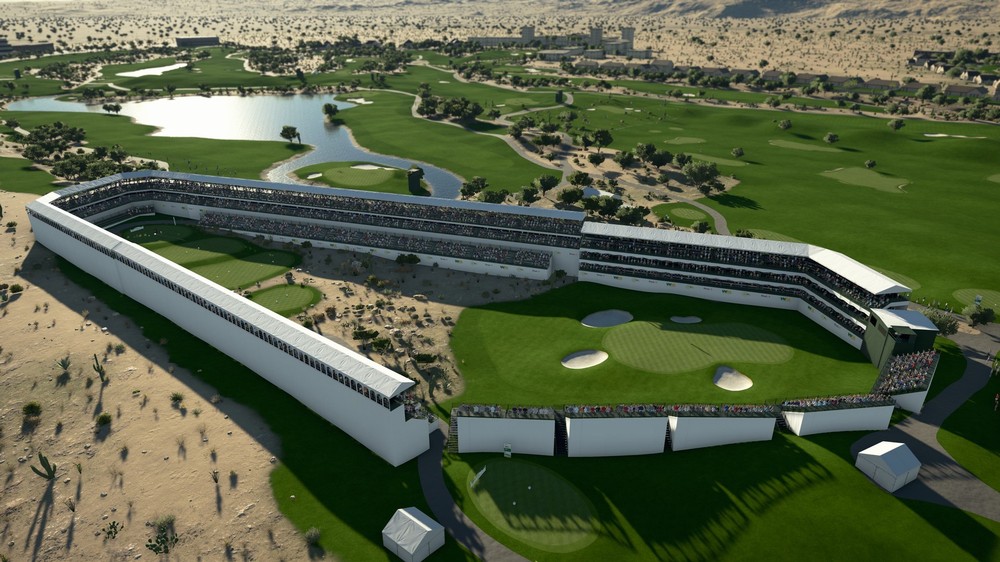 I have to admit there was a bit of a learning curve with PGA TOUR 2K21, and it took me nearly six hours before I got back into the…err…swing of things.  Tiger and Rory offered up an arcade experience that was more casual fun than actual simulation.  You had attributes and stats that you could modify to make those games incredibly easy and undeniably fun.  PGA TOUR 2K21, out of the box, is a hardcore simulation designed to recreate the experience of actually playing golf; at least as close as it can without swinging a club.  Yes, there are numerous options  you can tweak to make this game more like those other titles, but it will take a bit of tinkering before you find that sweet spot.

It took me about an hour to realize I couldn’t hit the ball straight using the right analog stick.  It is set in further from the grip than the left so I was always pulling to the right on my backswing and pushing to the left on the follow-through.  Switching to the left stick fixed a lot of my accuracy issues, but the other issue I had was with timing.  No matter how much I tried calibrating my swing on the practice course I was only getting perfect timing maybe 10% of the time, and poor timing when transitioning from backswing to forward swing saps power and increases the chance for a hook or slice.  Disabling the swing timing option turned this rage-quitter into a PGA champion with a few games.  There are pages of options and settings that let you change every facet of the game, allowing you to fine tune not only the course and physics realism but also adjust the challenge the AI golfers will present. 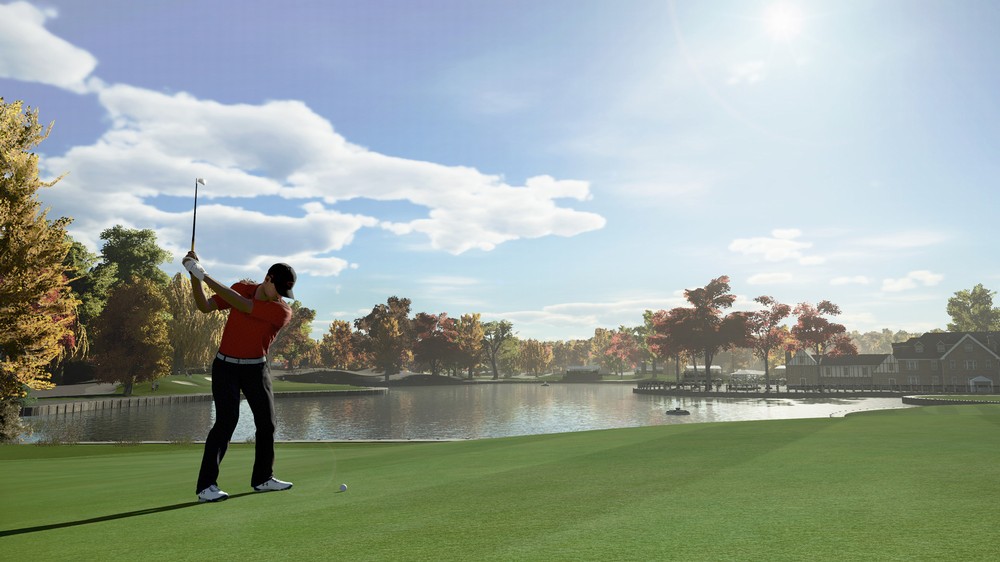 Like other 2K Sports titles you get to tinker around with MYPLAYER to create your own PGA avatar then dress them up with a massive wardrobe of clothing and accessories, most of which is locked behind XP progression earned by winning matches and completing challenges, and once unlocked can then be purchased with your earnings.  Those who don’t want to wait can always purchase in-game currency with real money, but I have trouble spending real money on real clothes for myself, so dressing up a virtual golfer is the least of my worries.

PGA TOUR 2K21 has a fantastic tutorial that will ease newcomers into the game and provide a useful refresher for returning fans.  There are all sorts of tips, suggestions, and assists like pro vision, distance control, and of course, putt preview.  The cool thing here is that you can get XP boosters for turning off these assists, so the harder and more realistic you make the game the faster you can level up.  As you are playing the game you will also get a challenge on each hole like hitting the fairway or green in regulation or scoring par without landing in a hazard.  These are another way to earn bonus XP. 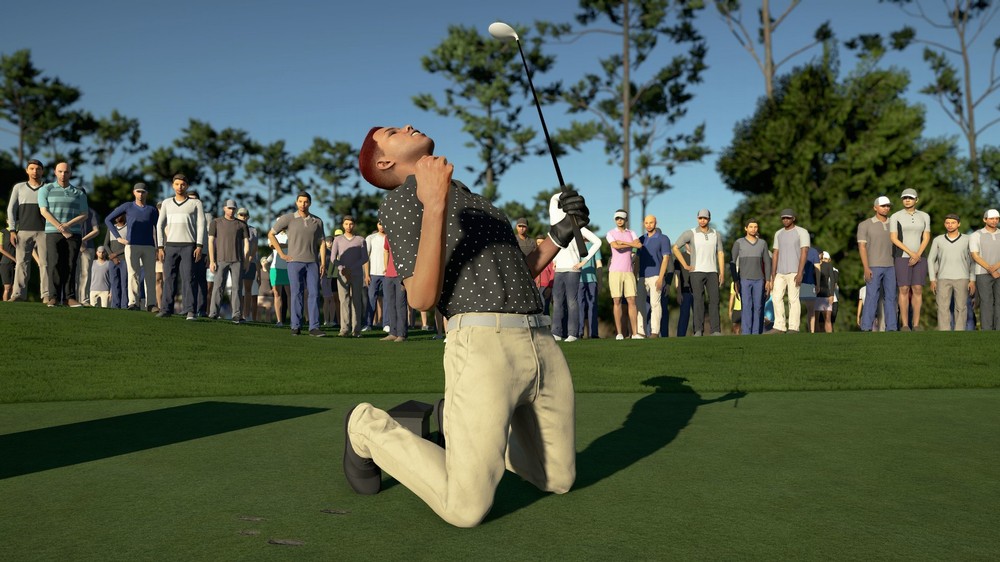 There is a lot to do in PGA TOUR 2K21.  For those who prefer to design a course rather than play on one, you’ll find the full-featured course creator an amazing tool for intuitively creating links that can look almost as good as the real-life courses meticulously recreated for the PGA Tour.  You can share these courses with a very active community and spend countless hours in the game without ever swinging a club.  But for everyone else, there is just as much to do whether you are playing local or online matches in Stroke or Match play, or check out the Alt-Shot where you take turns hitting each other’s ball or maybe play a 4-player Scramble.  You can even setup your own tournaments with customized rules using the Online Societies to create your own virtual Clubhouse.

Of course the meat and potatoes of PGA TOUR 2K21 is the FedExCup and the career mode.  Here you get to pick where you want to start; perhaps at the beginning in Q School where you try to qualify for the Korn Ferry Tour and hopefully a spot on the PGA Tour.  You are free to jump into the career mode at any point of the four-step process just as you are free to setup the rounds from 1-4 per match based on how long and realistic you want your career to last.  PGA TOUR 2K21 does a great job of letting you play the game exactly how you want to play it.  To spice things up a bit you do get to pick sponsors once you join the Tour and these provide you with various side challenges.  Once completed you can choose another sponsor with new challenges.  You’ll also get the occasional Rival; another pro golfer that offers up their own set of golf-related objectives.  Most of these challenges, including the hole-specific ones, are usually obtainable through normal play, so you don’t have to go out of your way to check them off. 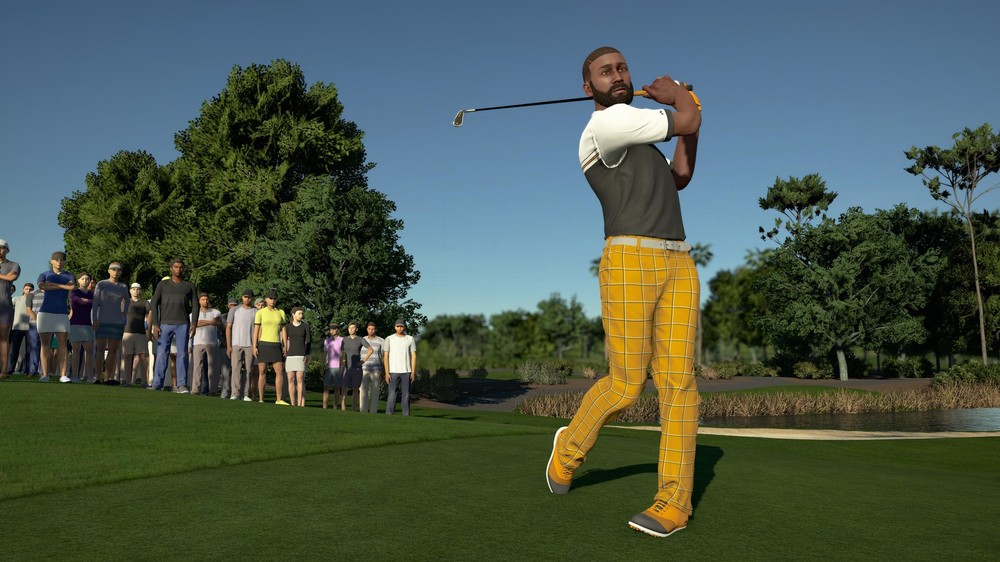 Once you do dive into any of the PGA Tour parts the presentation kicks up a notch.  Outside the Tour you get good old John McCarthy, offering up his sage-like commentary made famous in The Golf Club.  For as dry and boring as his musings can get there is no denying the sheer amount of variety and accuracy as he announces your situation and comments on your performance, good or bad.  In the PGA Tour games John will still report from down on the course while more professional commentators take over the booth.  Luke Elvy and Rich Beem deliver fantastic color and play-by-play commentary as you make your way through the PGA Tour, often calling on John for follow-up info.  While some lines repeat, especially those specific to the course, it never gets annoying and there are rumors that there are some lines of dialogue you might only hear once and they will never repeat.  I’ll never get tired of hearing, “that’s a ripper!” (it’s better with the accent)  I also enjoyed that they would occasionally cutaway to show me what another golfer was doing, creating a cool broadcast flavor to the game.

The overall presentation is quite polished even if not much has improved since last year’s game.  The game runs flawless at 60fps in 4K on my 2080ti and the load times are ridiculously fast even when installed on a mechanical HDD.  The level of detail is remarkable and the golfer animations are spot-on.  There’s not much environmental sounds but the sounds of club striking ball and the various crowd responses are all realistic. while the music and fanfare for the various pre and post-game PGA splash screens add to the TV immersion. 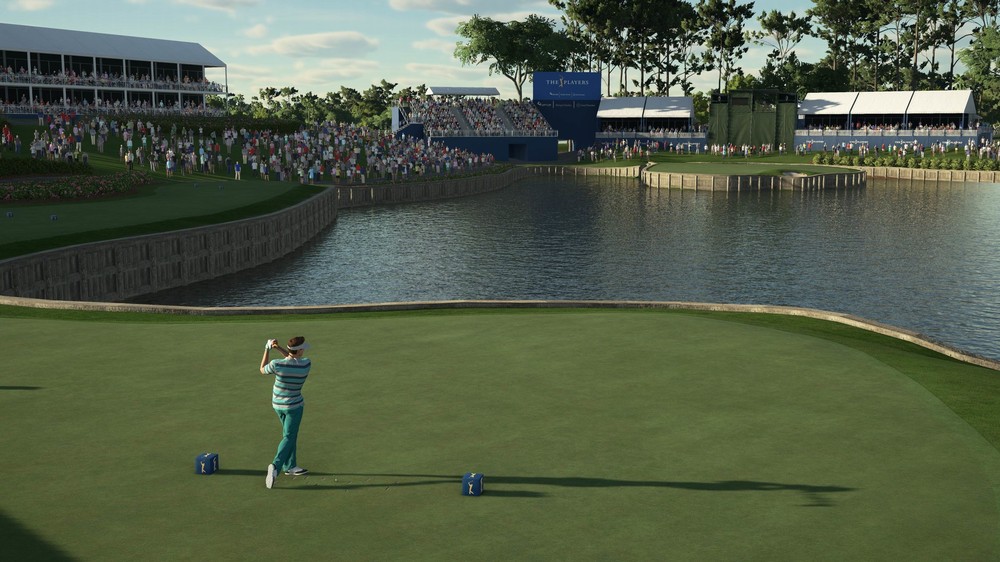 PGA TOUR 2K21 is a joy to play once you finally figure out that balance of realism and fun that’s right for you.  Thankfully, all those shot and realism options are adjustable at any time so you can tweak the game while you’re playing.  The ability to shape your shot combined with the ultra-realistic ball physics are excellent.  I did enjoy the ability to swap out clothing as I unlocked new stuff, and you can even dress differently for each round of a tournament assuming you are playing more than just one round.  The ability to customize your club selection was also a nice touch, especially when the bag defaults to four wedges and nothing lower than a 5-iron.

Whether you are looking for some casual arcade fun or want to punish yourself with one of the toughest golf sims ever made, or maybe you just want to tinker around with the golf course creation tools, PGA TOUR 2K21 offers a little bit of everything for every type of golf enthusiast.  Just be prepared to spend a bit of time figuring out the best way to play.  Out of the box the game is super-frustrating and impossibly hard, but the ability to simplify the experience then slowly increase the realism as you master the controls and learn the courses makes PGA TOUR 2K21 highly addicting and one of the best golf games I’ve played in years.