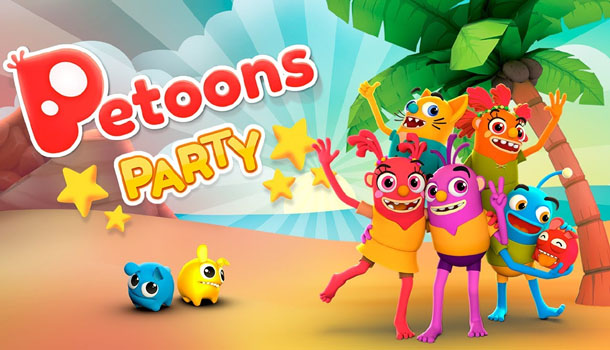 It is literally a Mario Party indie clone.

Petoons Party developed and published by Petoons Studio, is a friends and family party game consisting of wacky characters and mini-games to keep either yourself and some friends entertained or for a nice night in with the family. Released on September 20th on Nintendo Switch 2019, August 19th for PS4 and April 30th 2019 on Steam; this review is for the PS4 version but something interesting to point out is that the Steam version does require a controller, Mouse and keyboard is NOT supported at this time which I found pretty interesting.

Pletoons Party is literally a Mario Party indie clone with an original character roster made up of characters called, wait for it, Petoons. Petoons are goofy looking very brightly colored humanoids that are the citizens of the islands you play on. Petoons Party has multiplayer with up to four local players and each character can choose from the roster of Petoons. The game comes with three different modes to choose from, Story, board game or cup competitions. 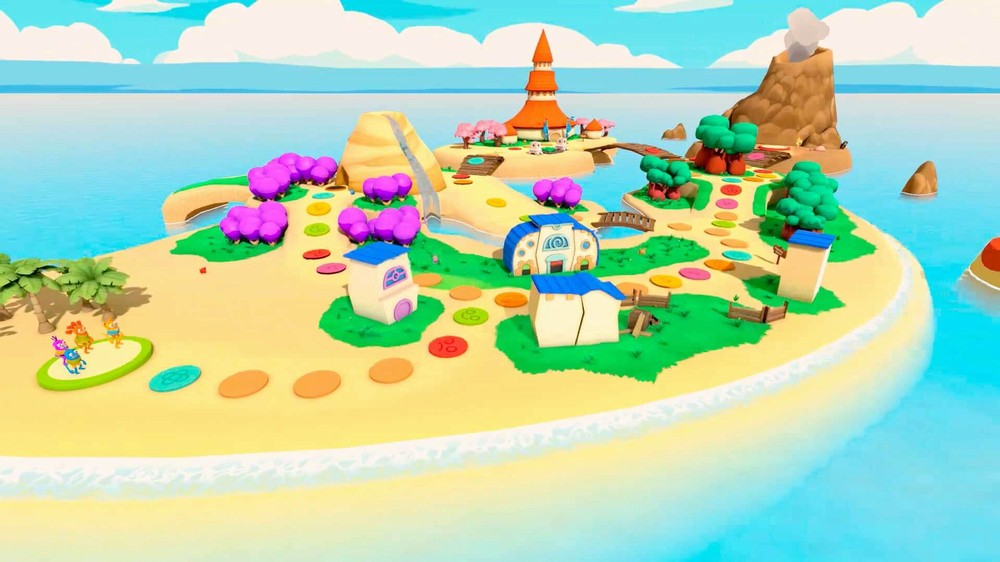 The Story mode is pretty straightforward, there’s a big bad green witch named Kitra that wants to take over one of the Islands and its your job as a Petoon to play all sorts of wacky games to fight back. I think the plot is not really a thing you pay too much attention to in story mode, and I pretty much just used it to practice some of the mini-games so that my wife wouldn’t beat me too bad at them. In the story mode there is a boss stage at the end of every board that you complete that gives you an idea of progress.

Board mode is the where all the meat of the game resides. In Board mode you choose from one of the three Islands and play against local players to reach the end and beat the boss with the most points accrued. The boards have all the same gameplay mechanics so really its about the paths available and the branches you can take to get to the end as fast as possible. It plays just like how you expect a party game that revolves around mini-games would play. You roll a dice and depending on where you land you will either gain points, lose points, get reversed, and even the ability to reroll if you land on the same color space. Thankfully, there is a fast-forward function so that you don’t have to watch every single animation that comes through. 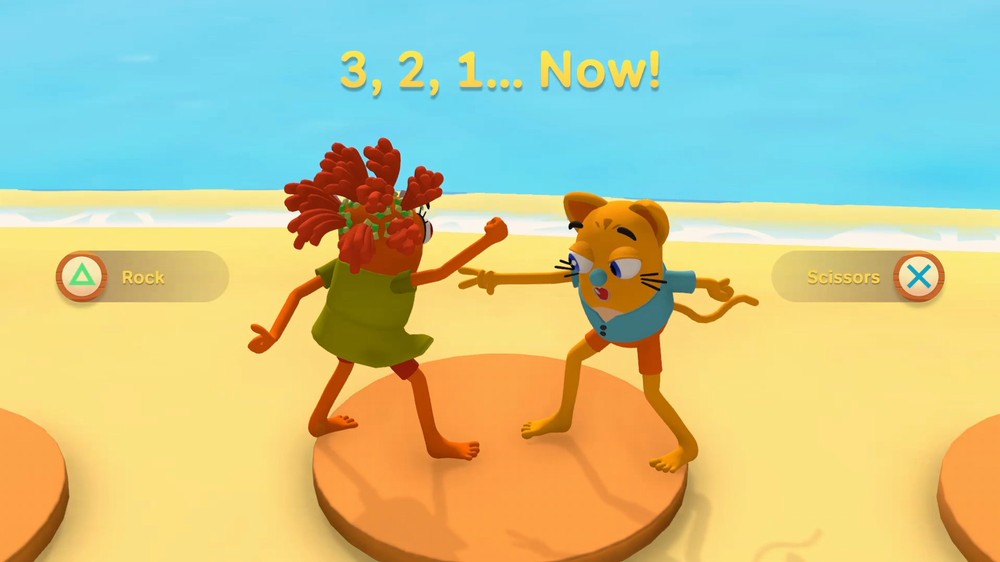 One of my favorite things to do was land on the same square as my buddies and steal their point just by playing rock-paper-scissors. A mini-game occurs at the end of every round and that’s how you can make your comebacks if the dice just weren’t giving you what you wanted. The boss stage is interesting because no matter who gets there first the whole party will have to cooperate to beat it. You COULD try to not beat it so that you can maybe reach it in your next turn but they are pretty simple to do so soloing it is a thing.

The cup competition is the place to go if you want to JUST play select mini-games. There are four cups to choose from with each having preset games to play. There are 28 mini-games to choose from after you unlock them using either story mode or board mode playing with friends. The mini-games all consist of things such as hitting guitar notes as they come up the screen, racing across a raft floating down a river to collect animals and put them in their pen and a spinning watermelon that got smaller and smaller as the time ran out and whoever was left standing on, I mean, it’s a party game, I didn’t expect anything outrageous so I cant complain. Pretty soon you’ll have completed all the party games and their island variations and find that there isn’t much else to do in Petoons Party. 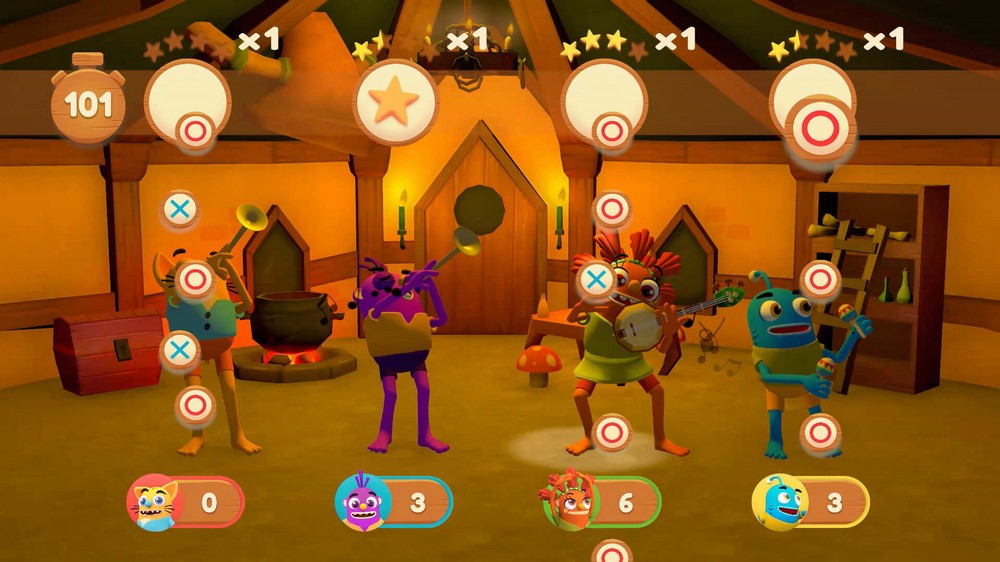 There isn’t any sort of customization of your Petoon, no way to make your own mini-game list to compete in, so replayability is kind of low, and really you can maybe get away with playing this once or twice before someone inevitably will ask why we aren’t just playing Mario Party? It was fun to try for a few matches but as quirky and colorful as they were, Petoons Party just doesn’t do it for me. 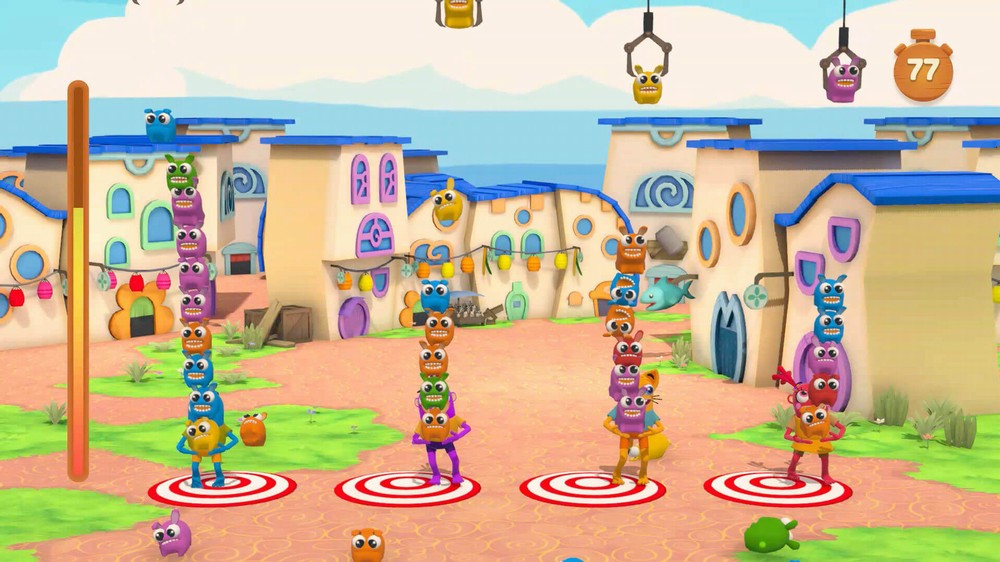