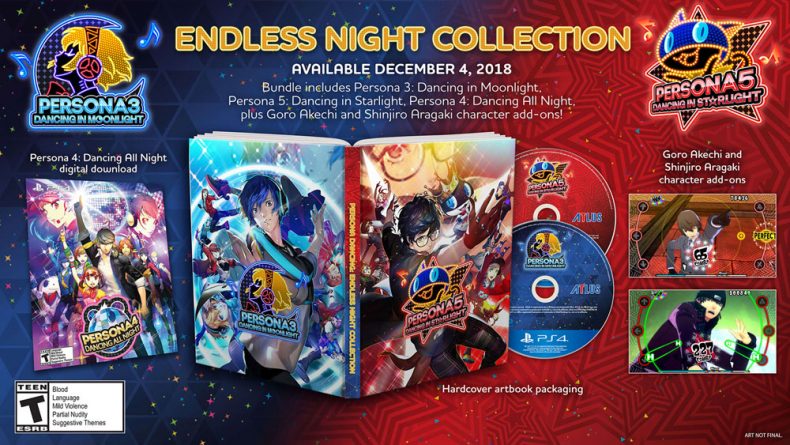 + Original voice actors all return to their rolls.
+ There are a large number of tracks
+ Dual Japanese and English Audio
+ Dialogue is funny as ever even if the plot is absurd.
+ Plenty of unlockables for your favorite characters

Perfect blend for fans of the Persona franchise and rhythm games.

Persona is a world renowned Japanese RPG series that is developed by Atlas. The latest in the franchise is their “Dancing” series, while Persona 4: Dancing all night was released for the PS Vita in 2015 the Endless Night Collection brings it over to PS4 as well as adding 2 new additional games with Persona 5: Dancing in Starlight and Persona 3: Dancing in Moonlight. Persona 3: DIM and Persona 5: DIS are very similar games and I will be talking about them together after covering the differences between it and Persona 4: DAN.

The main difference between all of the titles is their respective “Story” modes; story is in quotes because as this is a rhythm game story isn’t necessarily the primary purpose of the gameplay, but it something that I imagine most Persona fans will at least have some interest. In Persona 4: DAN you unlock songs and progress through a story mode that is light on actual plot and is more just a vehicle to get you to play the songs in the first place. The downside being that there can be long periods of reading in-between game-play segments that only last 2-5 minutes. That is truly the only big downside however, the music and their respective remixes for Persona 4’s soundtrack are enjoyable and the gameplay is exactly what you would expect from a rhythm game, I didn’t often feel the game ‘cheated’ me in any way with regards to missed notes or bad controls. 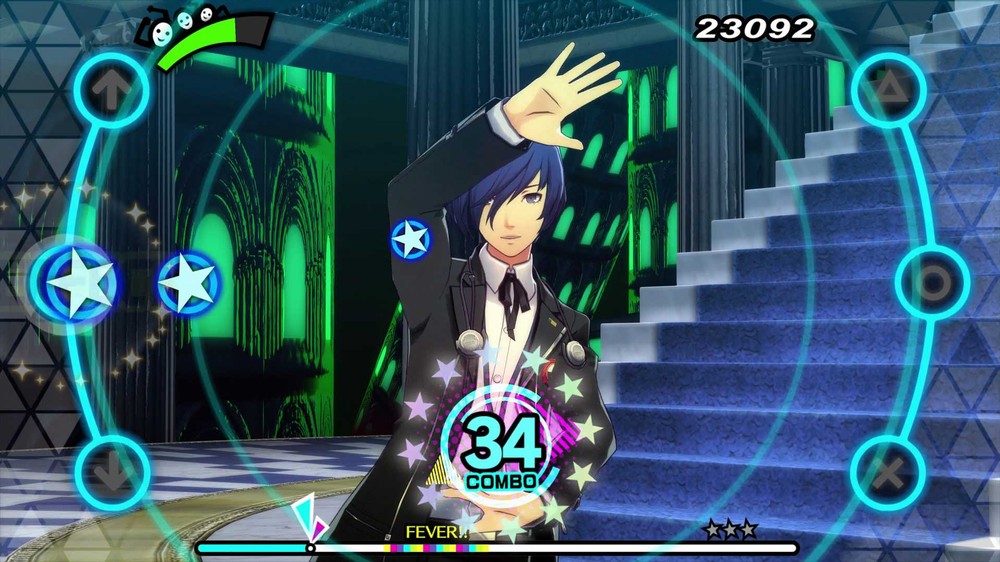 That is where the differences end really. In Persona 5: DIS and Persona 3: DIM they have resolved the issues listed above. They have removed the forced story mode and replaced it with a guitar hero style progression system of playing 4 songs, which unlocks a “Gatekeeper” song that when completed unlocks your next 4 songs and so on. That isn’t to say that they’ve completely removed the story and plot, but rather made it so that completing the songs will unlock social link conversations that you can enjoy at your own pace. They’ll still be there at the end of the game so you can do them as they come or simply all at once if you are worried you’ll forget the context over several sessions.

Those improvements aside it does not seem to have changed the fact that the plot is mostly there just to give fans more time with the cast of each respective game. While you shouldn’t expect any crazy revelations about a character, there are plenty of times I found myself laughing out loud which is certainly a plus. 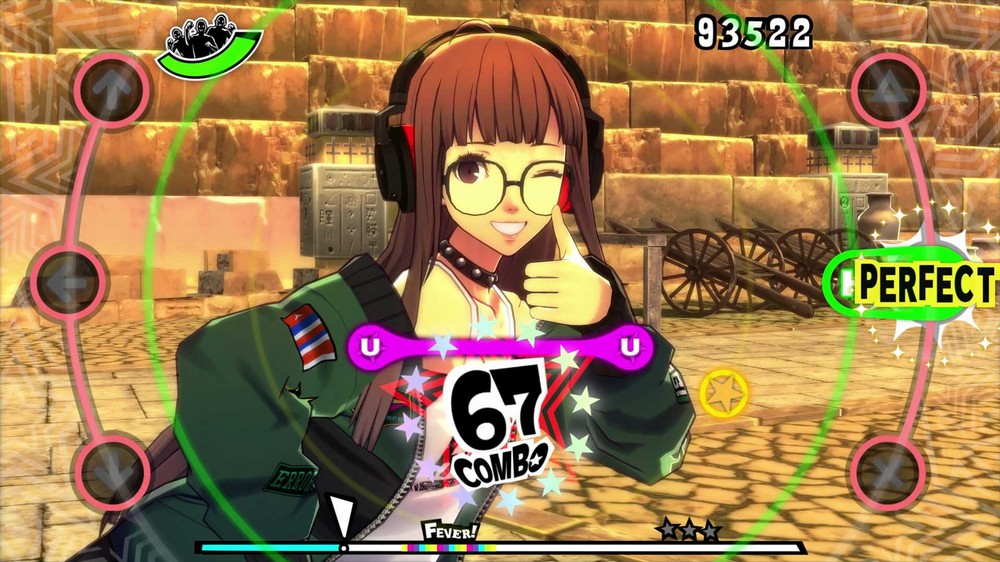 Something veterans of the series will appreciate are updated character models for the Persona 3 characters whose most recent flagship title was on the PS2. To go right along with all of those updated models are costumes and props for every single character. As you progress you can unlock a variety of different outfits such as school uniforms from their respective games, glasses, headphones and fan favorite seasonal clothing. Not only do you have the cosmetics but there are additional modifiers you can unlock to apply to a song as well to make it more difficult or easier if needed, such as not being able to fail a song or the song even failing if you miss a single note.  There seemed to be at least 4-5 different cosmetic slots for plenty of customization if that is your thing.

Then we have the music itself. How much you’ll enjoy the soundtrack of each version of the game will largely influence how much fun you have. I really like Persona 3 and 4’s soundtracks but have almost no experience with Persona 5. While it didn’t stop me from having a good time and progressing through Persona 5: DIS, the familiarity of previous soundtracks definitely made it easier to jump right in. Speaking of those soundtracks however; one thing that did detract from the experience for me was that there are many instances of songs being repeated but remixed differently or by a different artist. It isn’t inherently a problem if you like a given song enough, but there are bound to be tracks that you will not like and having to play the same song you don’t like three different ways likely won’t change your opinion on it. 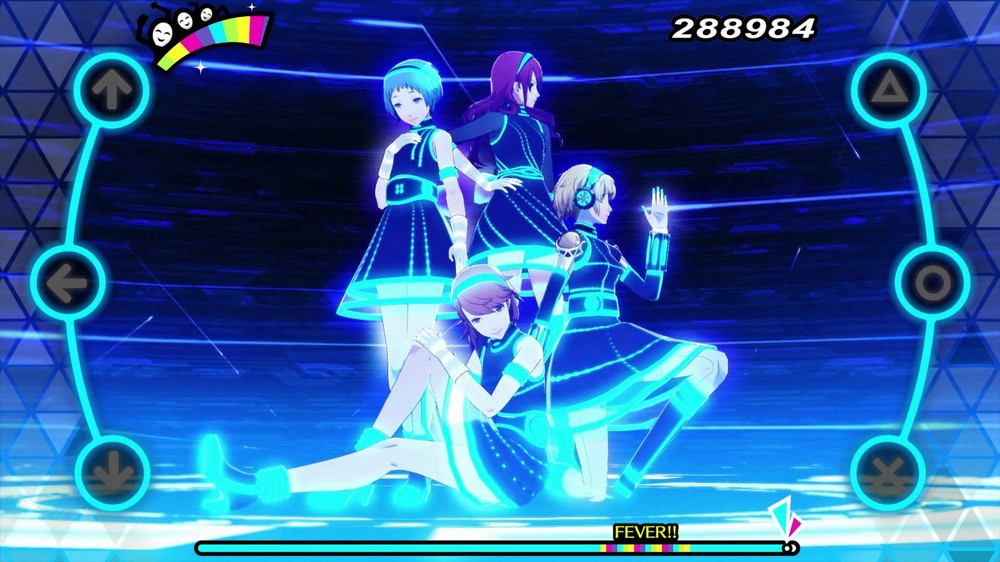 Ultimately Persona 3:DIM and Persona 5: DIS have improved on the design of Persona 4 Dancing all night, if you love the Persona franchise to death and need to get an extra fix these games will certainly scratch that itch. Persona 3:DIM and Persona 5:DIS are $59.99 on PS4 and 39.99 on PSVita. If you are a PS4 player who never experienced Persona 4 Dancing all night the Persona Dancing: Endless Night Collection will allow you to play it as well as the two newcomers on your PS4. Overall I would rate the collection a 4.5 /5. The official release date is December 4, 2018. If you like the Persona Franchise and you like rhythm games I think you’ll find it hard to go wrong with this series. 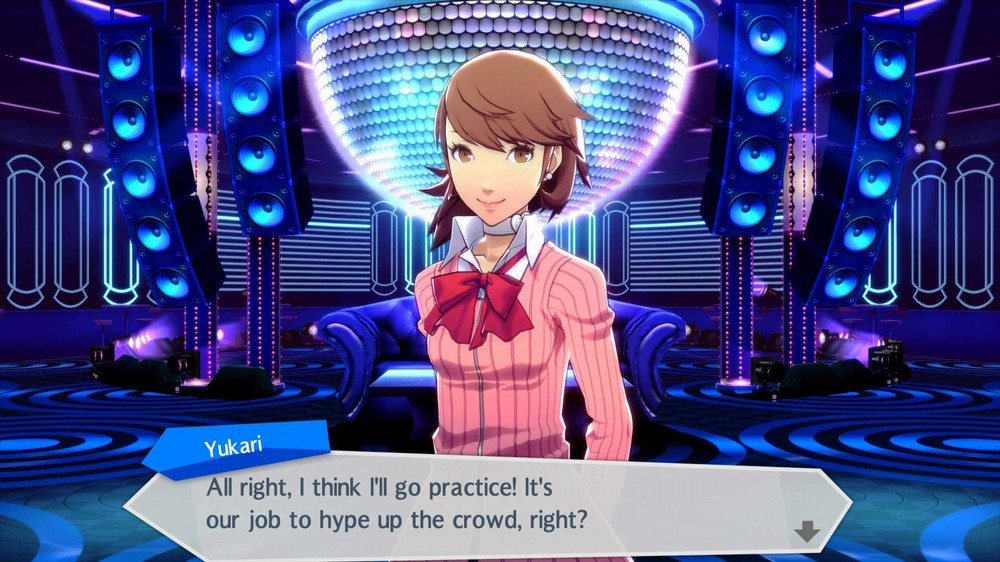 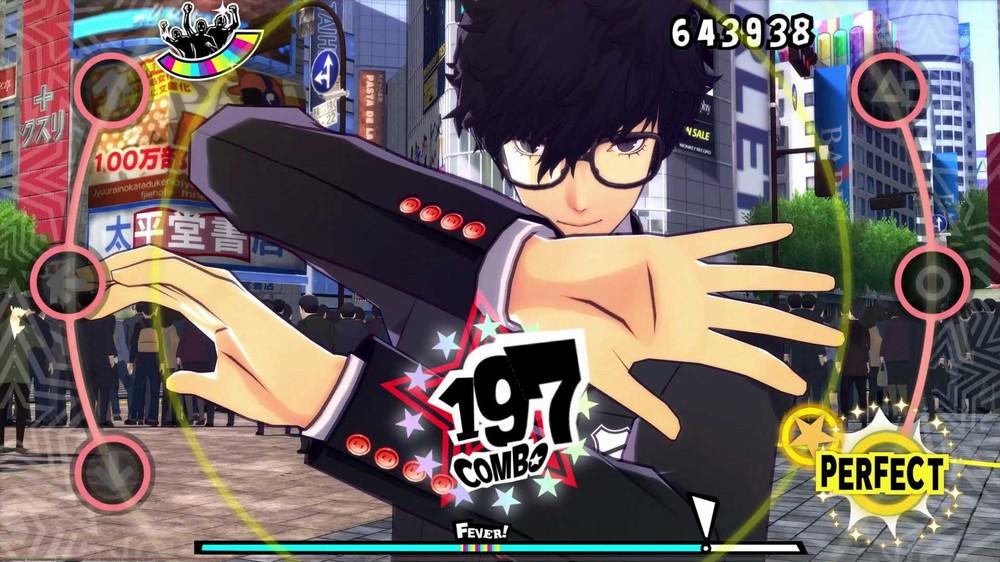 DualShock 4, PSVR support for some modes