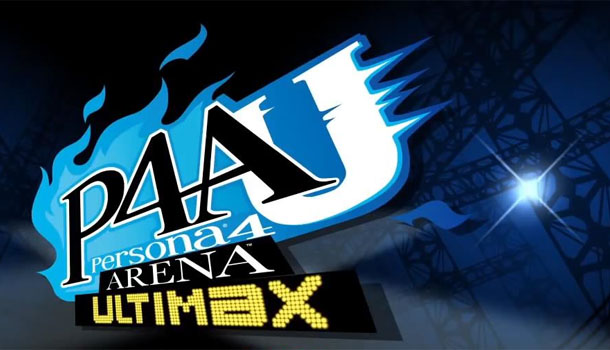 Fans of Persona or those interested in a great fighting game with a great story should definitely check this out.

Don’t touch that dial, don’t turn off that TV, the Sho is about to start with another beary exciting installment of Persona with the release of Persona 4 Arena: Ultimax for the PlayStation 3. So I’ve been a fan of the Persona series for a while now especially having dumped hours into Persona 3 and Persona 4(both but Golden for my portable sessions) and I have to say the story heavy experiences really draw me in.

What really piqued my interest though was that the Persona franchise was getting a fighting game in the form of Persona 4 Arena which released back in 2012 by Arc Systems (BlazBlue) and Atlus. While I never got around to playing it for some reason or another it’s sequel of sorts, Ultimax, has proved to satisfy both my love of RPGs and my enjoyable but not always rewarding run at the fighter genre in a rather surprising way. It’s no secret that fighters rarely have engaging stories outside of likes of Injustice but Ultimax’s engaging story was enough to get me hooked.

Taking place nearly right after the events that turned the mysterious TV World into a tournament ground in Arena, Yu Narukami and the rest of the Investigation Team are back as the Midnight Hour starts up once again. This time the tournament spills out of the TV into the real world as the P-1 Climax promises to be an end of the world Sho stopper…literally. So it’s up to Yu, Chie, Kanji, Yosuke and the rest of the gang to head back into battle as a red fog overtakes the city of Inaba as they set out to save Mitsuru and her associates in the Shadow Operatives. 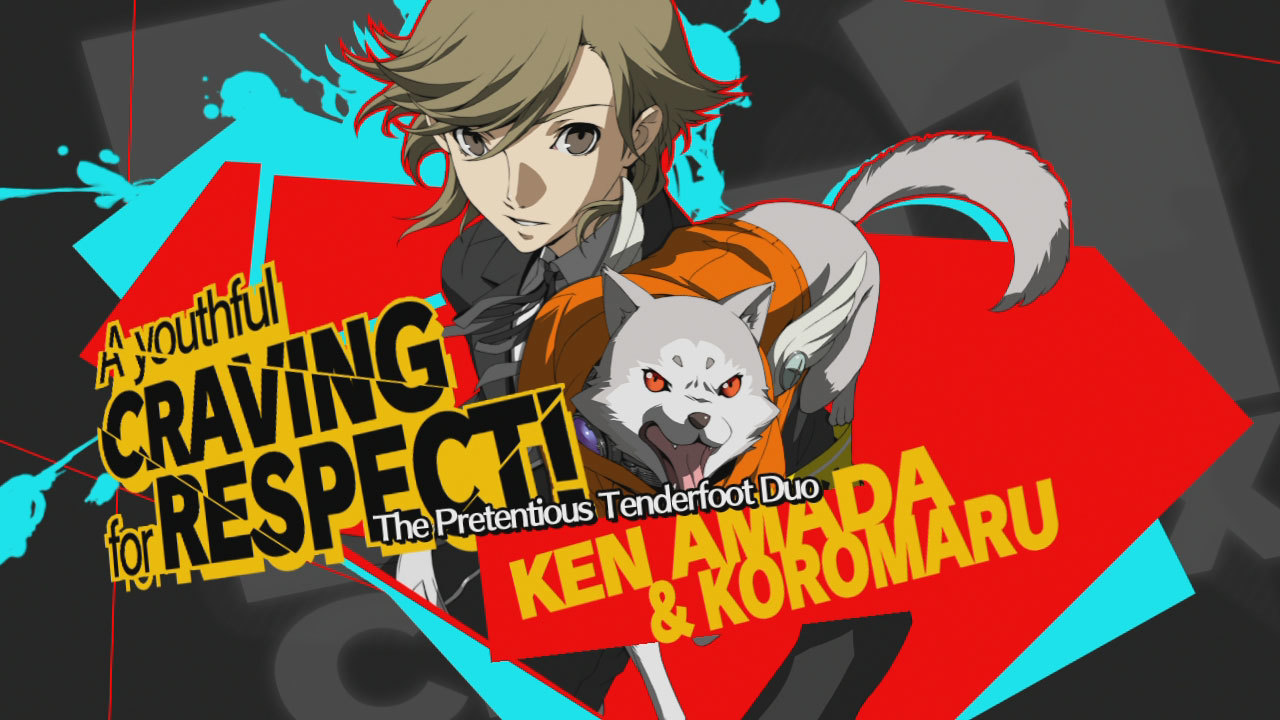 Ultimax offers players plenty of ways to enjoy this fighter even if you’re new to the Persona 4 Arena series. The main chunk of the game takes place it its Story Mode which could easily take you 10+ hours to complete as you make your way through dialogue and fighting alike in a visual novel presentation. For those familiar to the Persona series then you know that reading is a big part of the experience and here in Ultimax it is no difference. There are easily around 50 or more events throughout the story though about a fifth of them are actual fights. To make things cooler you get to see the story from two different sides broken up between the casts of Persona 3 and 4.

For those wanting to get right to the fighting there are plenty of options in Ultimax to do just that. For starters you have the Arcade Mode which allows you to play Persona 4 Arena: Ultimax (P4AU for short) without having to go through all the backstory with your favorite Persona character. There’s also the traditional ScoreAttack where you can go up against the CPU for the high score. Personally I enjoyed the Versus mode so I can challenge my friends to a good old fashioned rumble. Though for a nice challenge, there is the GoldenArena which I dropped way too much time into as I completed floor after floor in one of four difficulties in this challenge dungeon. 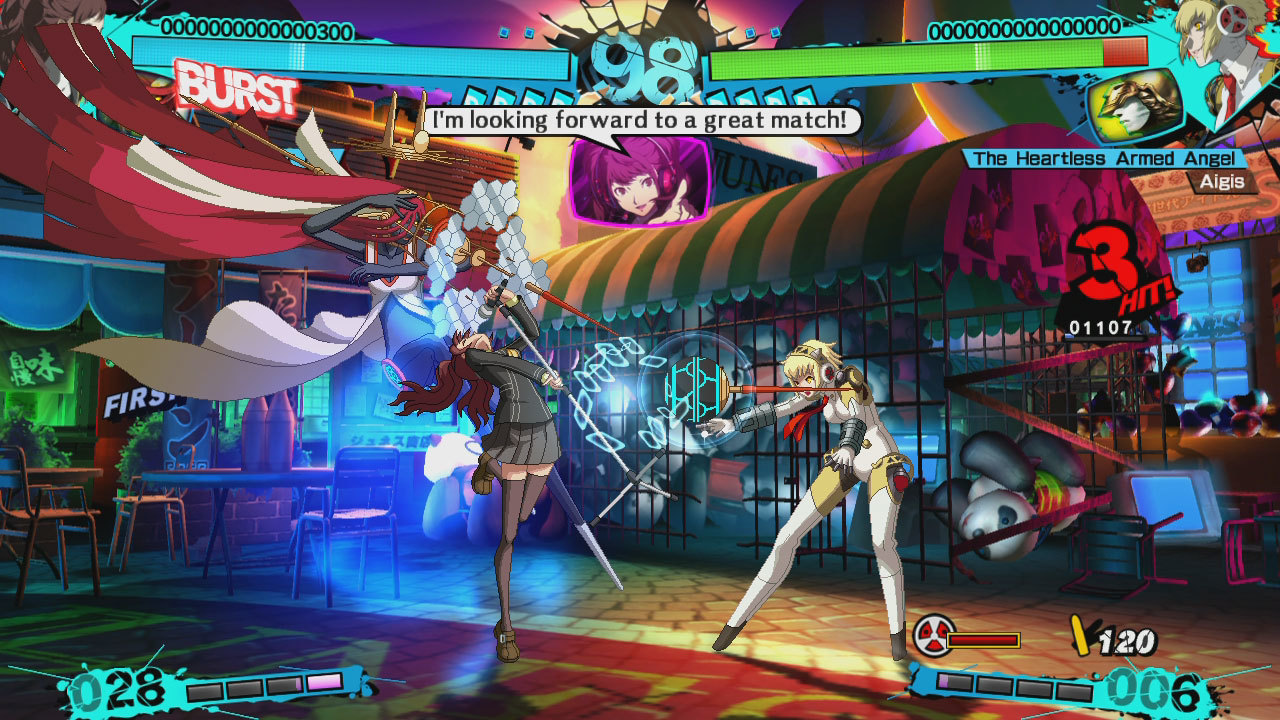 For the ultimate challenge though you can take Persona 4 Arena: Ultimax online and compete against other players all over the world in everything from casual matches all the way up to ranked matches there is even an arcade style lobby so you chat up fellow fighting fans and complete in matches. During my online matches I was surprised that I didn’t run into a bit of lag that’s been a problem for gamers in online fighters.

Combat in Ultimax is actually pretty enjoyable and features a traditional 2D fighting system that sticks to a very traditional 4-button control system which is simple enough to do on a controller. Ultimax is also designed to make the game accessible to all players, new or veteran. Thanks (and sometimes no thanks) to a single button press the unexperienced can pull off the flashy move combos that veterans have been pulling off in these type of games for years. I can easily say that I’m no expert at Ultimax but I had a blast trying to get better. As most fighters go, they are always better with a fight stick so if you got one then I would definitely use it here.

One of the things that I really like about Ultimax is the cast of the playable characters. There are 19 playable contestants in this fight to save the world battle with another 3 available as DLC including the Person 4 Golden exclusive Marie. The cool part is that most of the cast has a Shadow version which essentially almost doubles the count of players to choose from. These are not just costume changes either (though that is an option via character select and DLC) as these characters have different move sets as well as more health, weak normal attacks but stronger specials than their counterparts. It makes for some rather cool mirror battles from time to time. 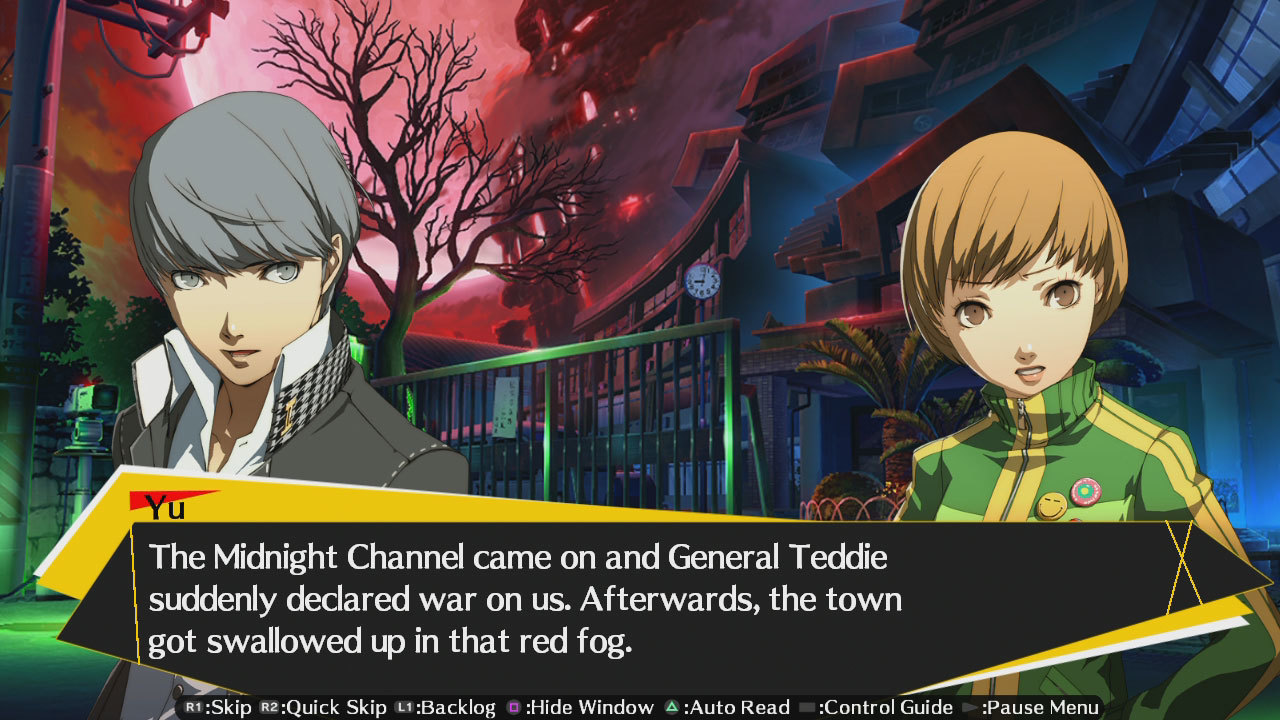 Persona 4 Arena: Ultimax’s graphics are easily one of my favorite things about my time with this fighter. First off you have the sharp artwork and animation presentation that the Persona series is known for in its opening movie, story progression and menus. Then you have the smooth character animations of the actual combat. The character models aren’t quite the same caliber of clarity as the still but it still looks good. The various arenas are all quite pretty though and fits the mood of the game perfectly. To round out the visual package, Ultimax features an amazing soundtrack and voice acting to boot. The opening song “Break out of…” is easily one of my favorite tracks in the game with its heavy metal and Japanese styling. One of the nice things is that a heavy chunk of the original actors portray their respected characters which I love in games like this.

I have to say that I had my doubts at first when I got ahold of Persona 4 Arena: Ultimax to review. I’ve been let down before when series that I love have branched out into other genres or altered to feature different functionality. Luckily the strong story presence, animation, voice acting and fight system make Ultimax a welcome addition to the franchise as a whole. Arc Systems took what they know best and blending it nicely with Atlus’ most iconic series in a way that I found enjoyable. While this mix may not appeal to fans of either genre, it’s definitely found a place in my collection. If you love Persona and have an interest in fighters then I definitely recommend checking out Persona 4 Arena: Ultimax for PS3 today. 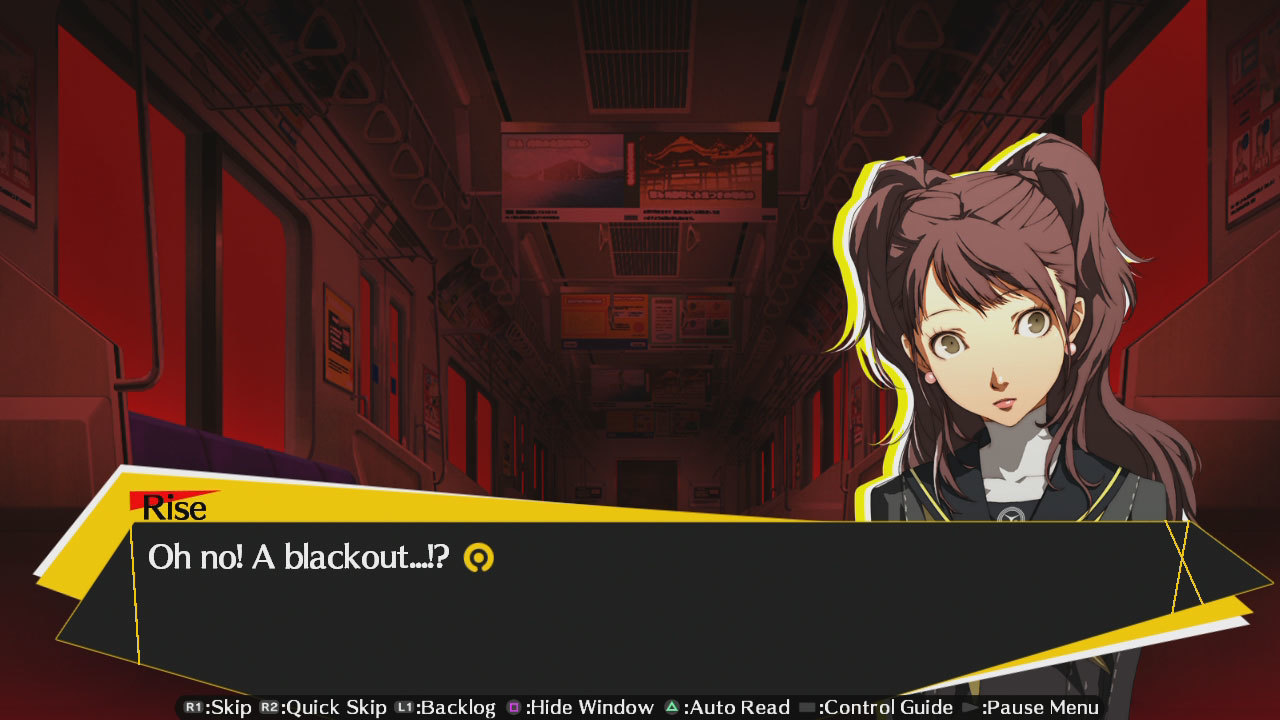 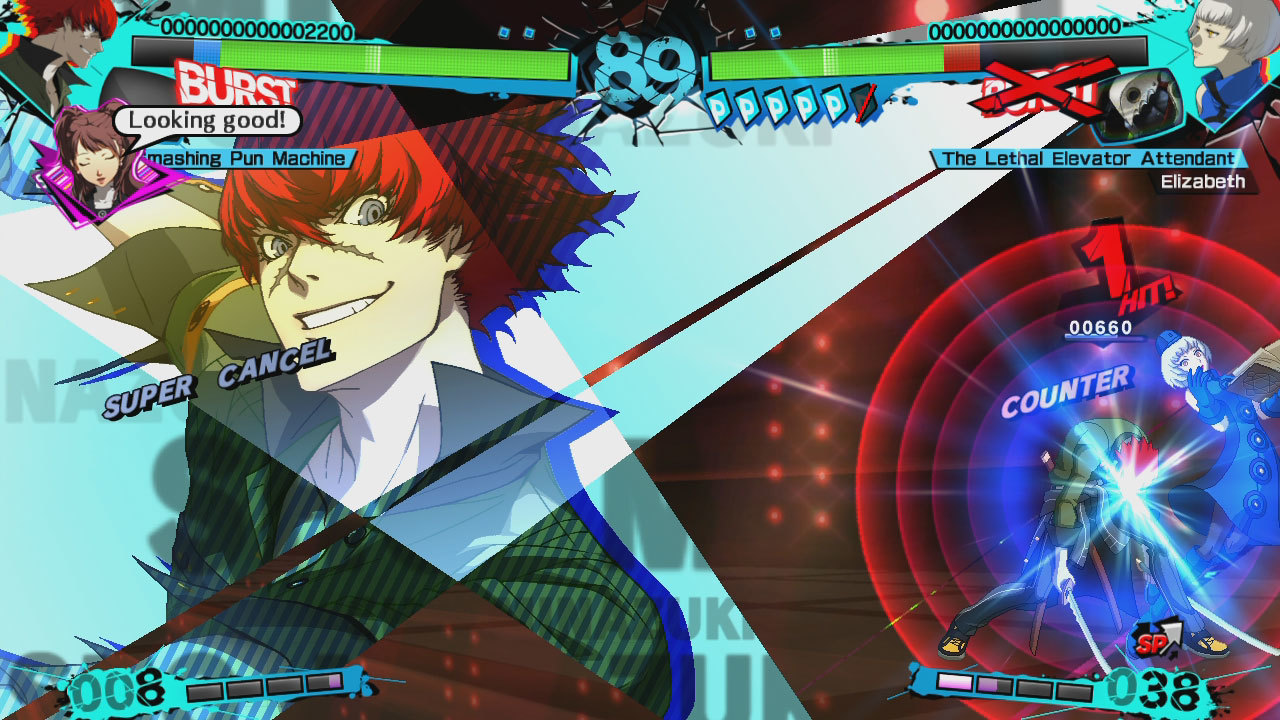 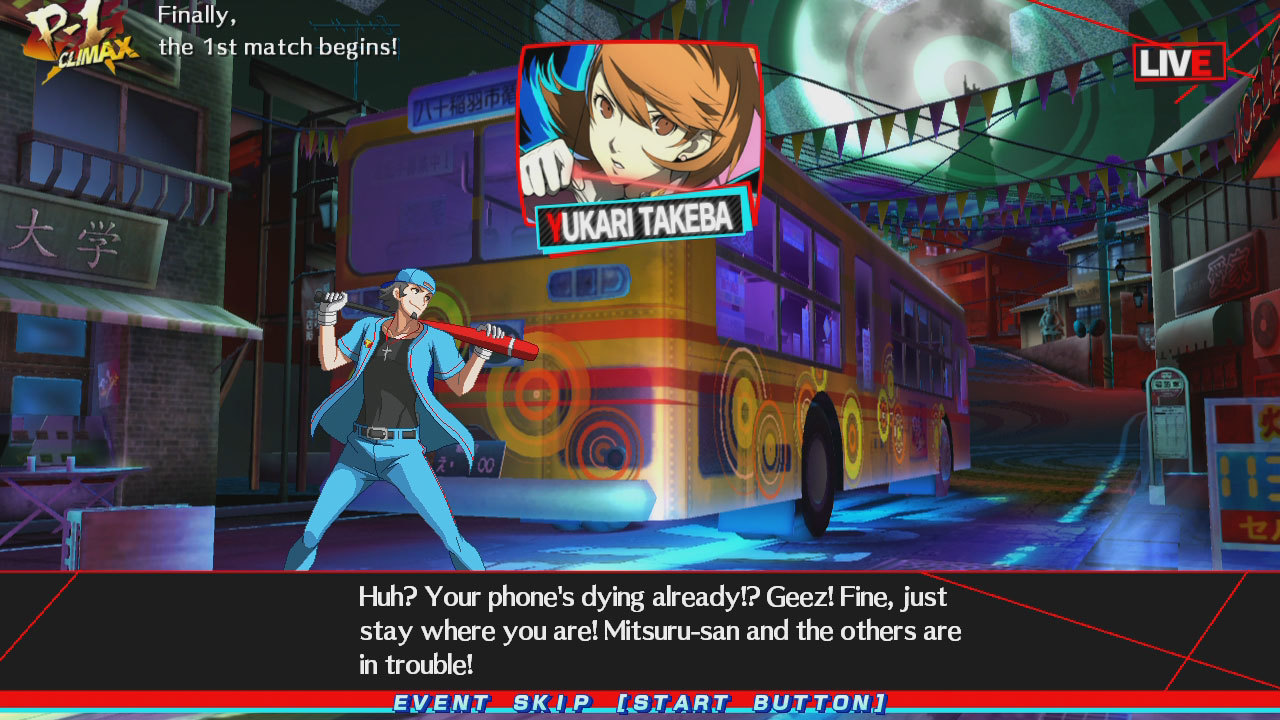 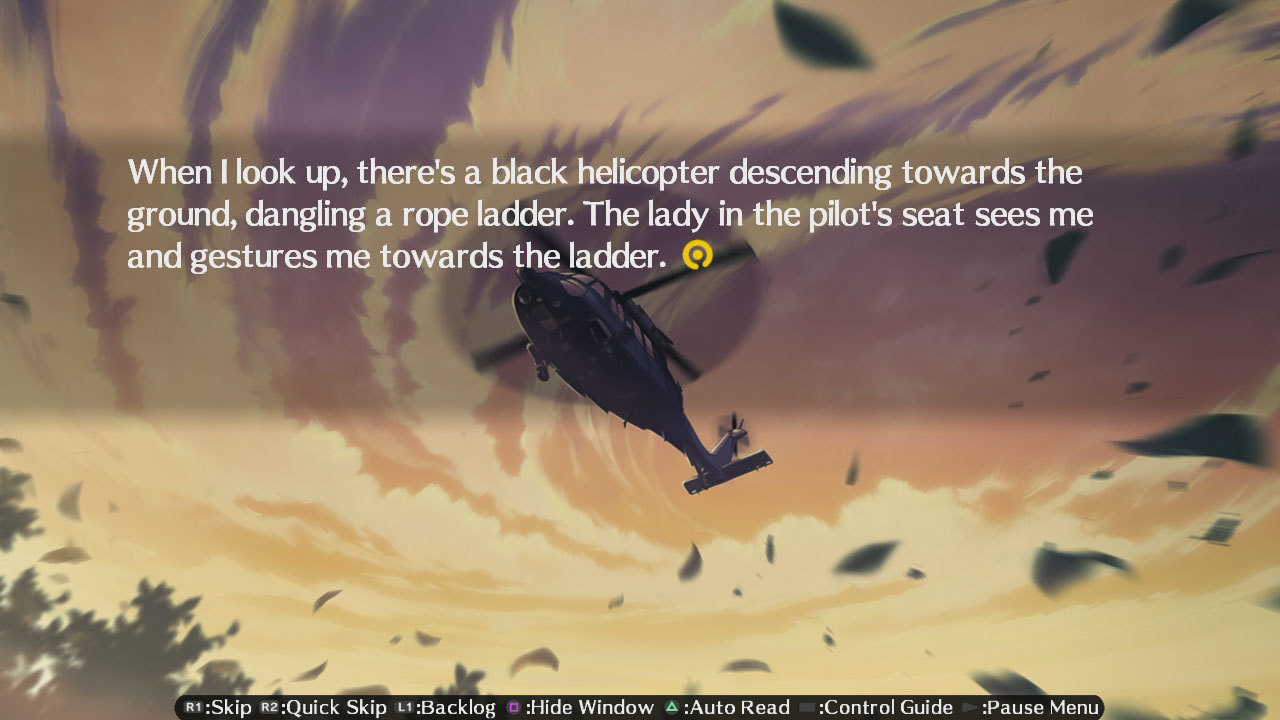 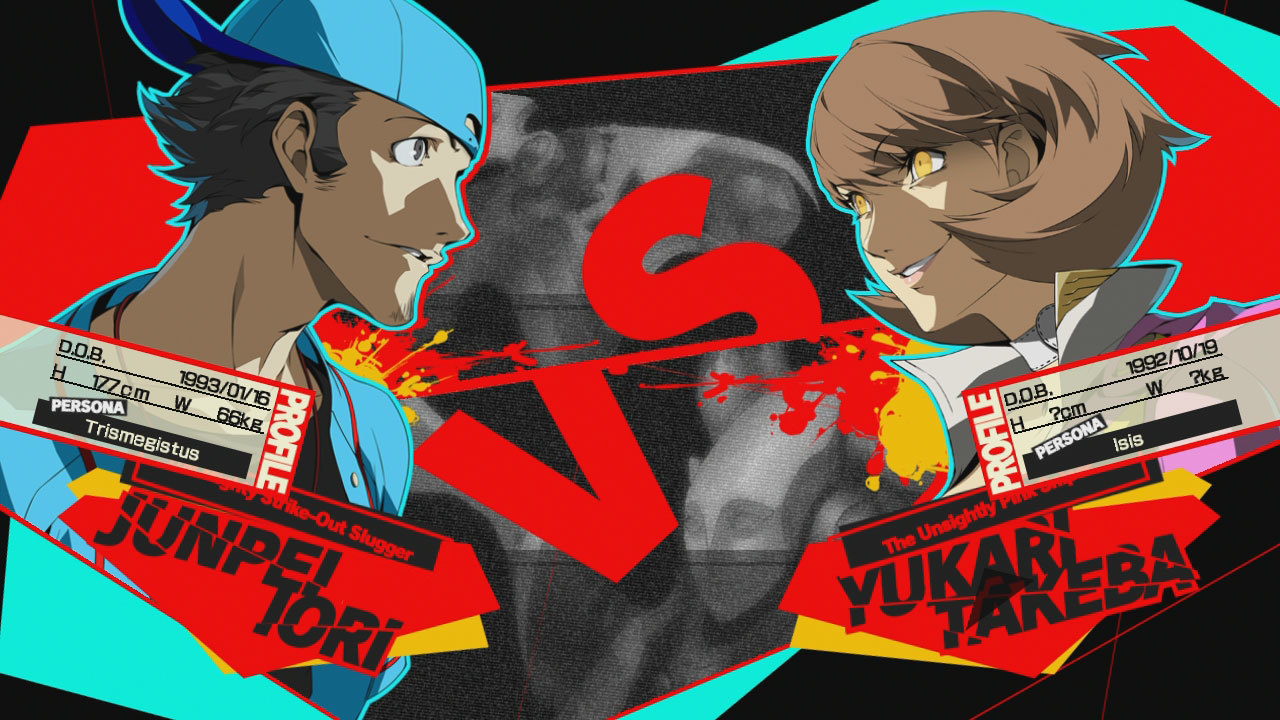 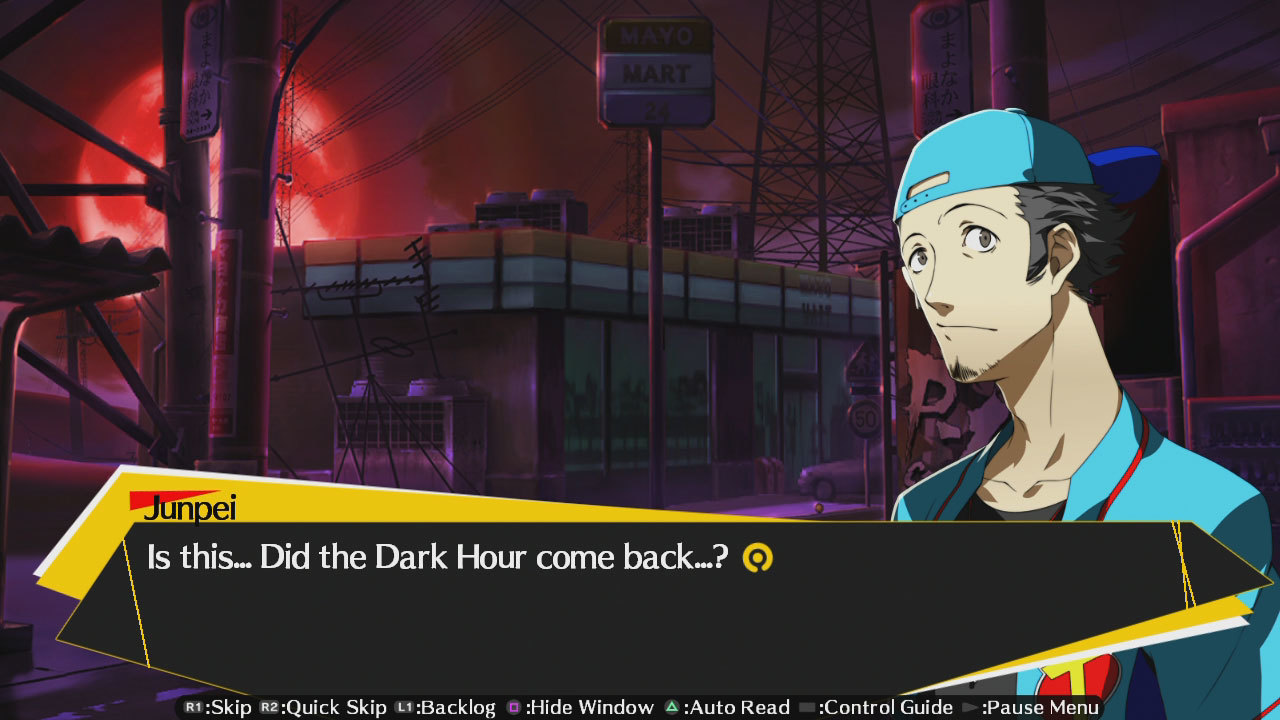 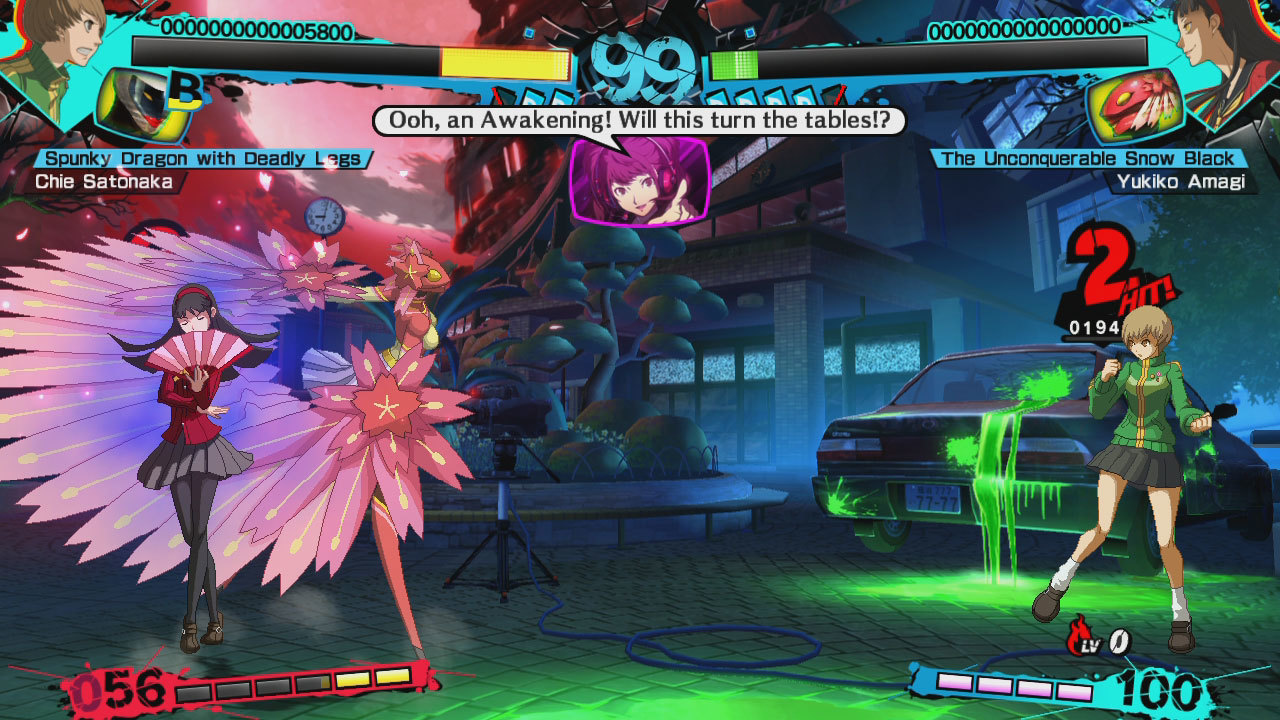