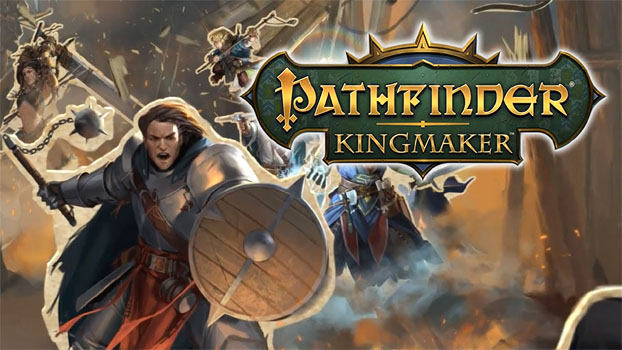 Does an excellent job of presenting a world that I want to be involved in.

Starting up an RPG is always an enticing prospect, with new characters, new stories and a brand-new world to discover. Pathfinder: Kingmaker is packed with all of this, and has recently found its way to the Xbox One in a new Definitive Edition containing the base game and a collection of DLCs. Originally released on PC in 2018, Pathfinder: Kingmaker puts the player in control of their own barony and tasks them with keeping their populace happy, all while battling against enemies both within and outside their court.

If you’ve played an RPG of this type before, such as the Baldur’s Gate or Divinity: Original Sin series, then you’ll have some idea of what to expect from Kingmaker. For the first few hours, at least, it plays out in a fairly familiar manner. You’ve been invited to a fancy dinner, given the task of eliminating a bandit leader, and set out with a group of companions to battle your way to victory. However, once this is done, you then get put in charge of the new land that you’ve liberated, and this is where Pathfinder: Kingmaker really starts to get into its stride. From here, you’ll be in charge of construction across your new lands, you’ll need to listen to your advisors and solve problems across the kingdom, and you’ll need to venture out to defeat all kinds of foes. 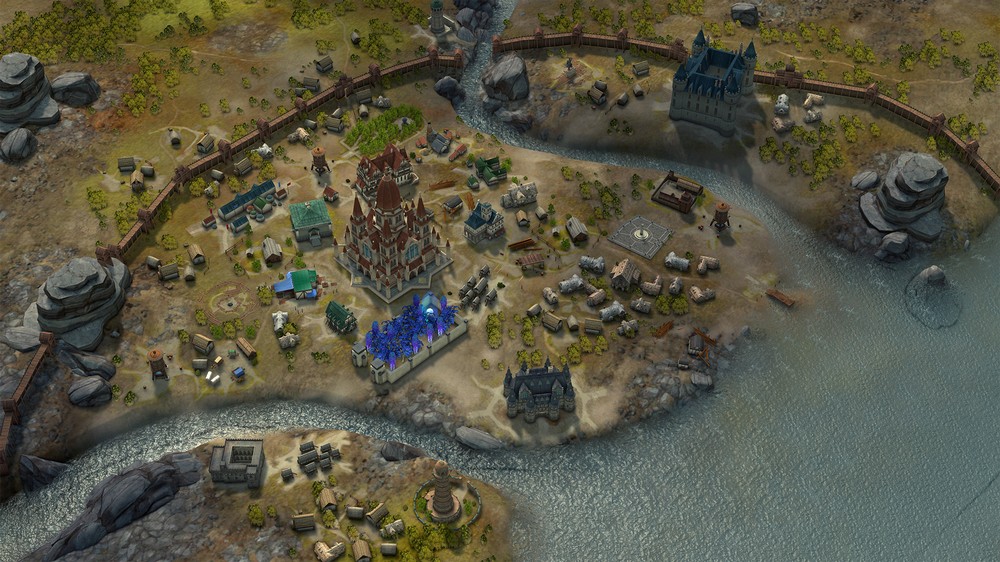 It’s a lot to balance, but Pathfinder: Kingmaker does a good job of spreading the experience out over enough hours that players have ample time to get used to what is being thrown at you. Admittedly, the first few hours of running your new barony can feel quite overwhelming, but the game does a decent job of explaining your various options, and the pace at which decisions are needed to be made, at least early on, is fairly slow. Outside of your Throne Room, you’re allowed to explore your lands and complete any number of quests, meaning that if you’re looking for a more typical RPG experience, it isn’t taken away from you as soon as you’re put into a position of power.

Pathfinder: Kingmaker is a huge experience, and though the narrative delivery might feel a little slower than in many other games, this allows the game chance to breathe. The world feels lived in, and it feels like events that you deal with in the game have history, with factions that existed before your story started, and rivalries that will continue after your character is long gone. This feeling is aided by the inclusion of a Glossary function, which allows you to select pre-highlighted words in text, be it conversation or description, in order to open a small entry that will give extra context to what is being described or discussed. 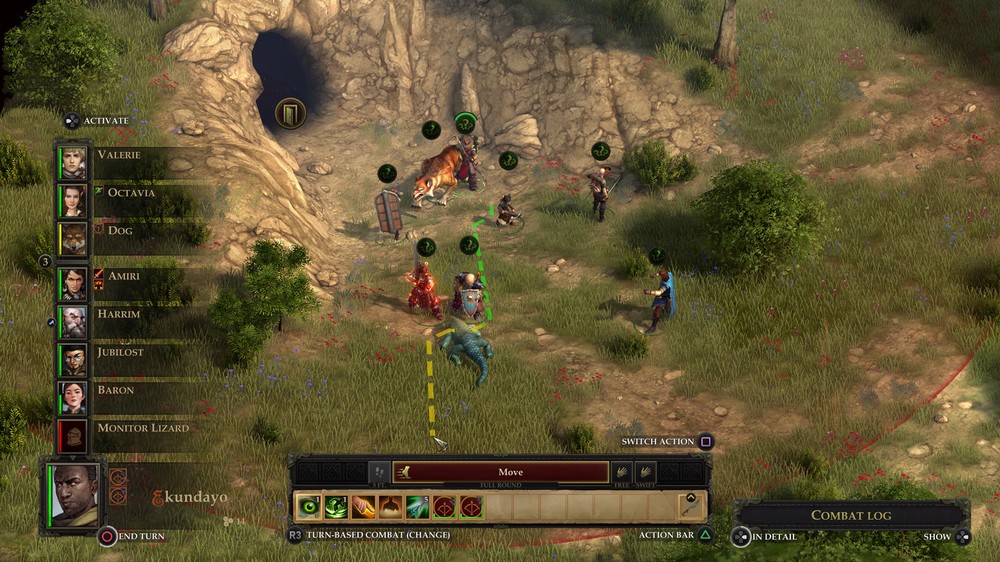 It feels a lot like Kingmaker attempts to allow the player to discover the world at a similar pace to the player’s character, and because of this a lot of the quests feel like they have an investigative flavor. This leads to a lot of the stories emerging slowly as you peel away their various layers, but it also allows you the time to explore your new lands and talk to its residents, as well as encouraging you to get to know your companions and party members. There’s a strong cast of characters within Kingmaker, and I found that there was ample opportunity and reason to keep your party make up fairly fluid. In a lot of RPGs of this type, I often pick a series of characters early on and keep them fairly static throughout the game, but a series of character-specific quests and events makes it well worth changing your teammates fairly frequently.

The world map in Kingmaker is large, and at the start of game is pretty much empty, both in terms of roads and landmarks. Allowing the game to live up to its Pathfinder name, you’ll need to discover routes to various locations by selecting a particular direction and travelling until you find a fork in the road or something interesting to investigate. In a sensible decision, certain areas will show up on the map if you’re given specific directions by an NPC, but just as often you’ll be given vague instructions or a general area and asked to find the specific location yourself. You travel the map as a game piece, and though you’ll occasionally bump into a random encounter or a group of enemies, you’re often allowed to travel fairly unimpeded. I personally found this means of traversal incredibly engrossing, and I was constantly looking to wander off into areas that I hadn’t yet visited to see if there was anything new just off of the beaten path. 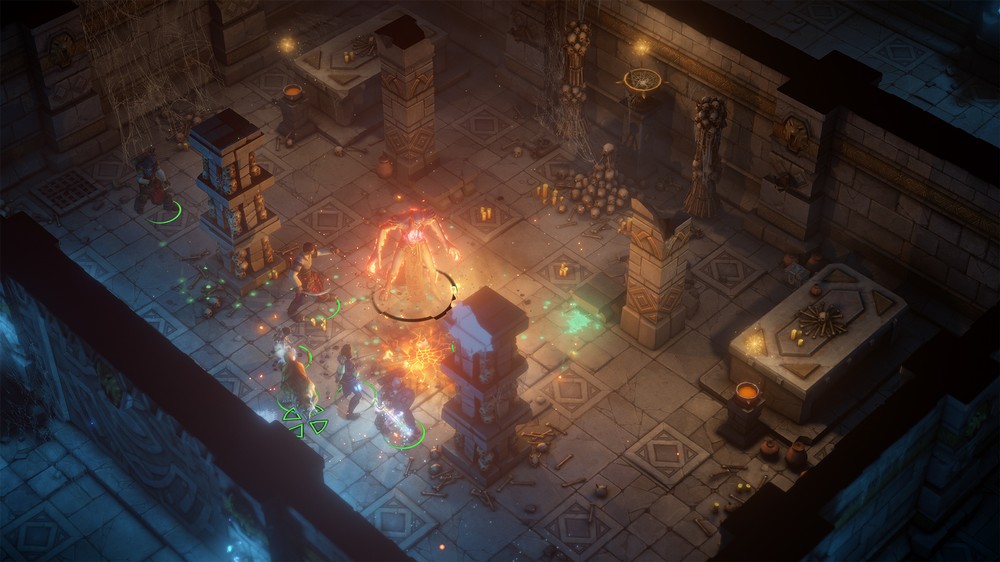 There’s a great variety of environments to visit, and similarly, there’s a good selection of tasks to undertake. A lot of quests will come to you, in the form of kingdom management or petitions from your citizens, but you’re just as likely to stumble upon something interesting out in the wilds that will uncover a quest to complete. As I played more and more of the game, I did start to feel like there was a bit of a disconnect between the kingdom management mechanics and the more typical RPG side of game, almost as if they were records operating at different speeds. You are given the option to skip days when in the kingdom management screens, if you want to speed up time and complete projects or tasks more quickly, but I much preferred to be out in the wilds fighting or exploring.

The kingdom management side of the game is an interesting inclusion, but perhaps doesn’t function quite as smoothly as it might. This is partly because of the transition to console, as like the inventory management screens, the kingdom management setup feels a little unwieldy to navigate with a controller and moving both between and within screens can sometimes get a little confusing. As well as handling requests from your populace, you’re also able to assign roles within the kingdom to your companions, with the idea being to match their personalities to particular roles to make them as effective as possible. Your decisions can award BP to your kingdom, which is a currency used to construct new buildings in your settlements, which in turn provide better ratings for your kingdom and can increase the stability of your rule. 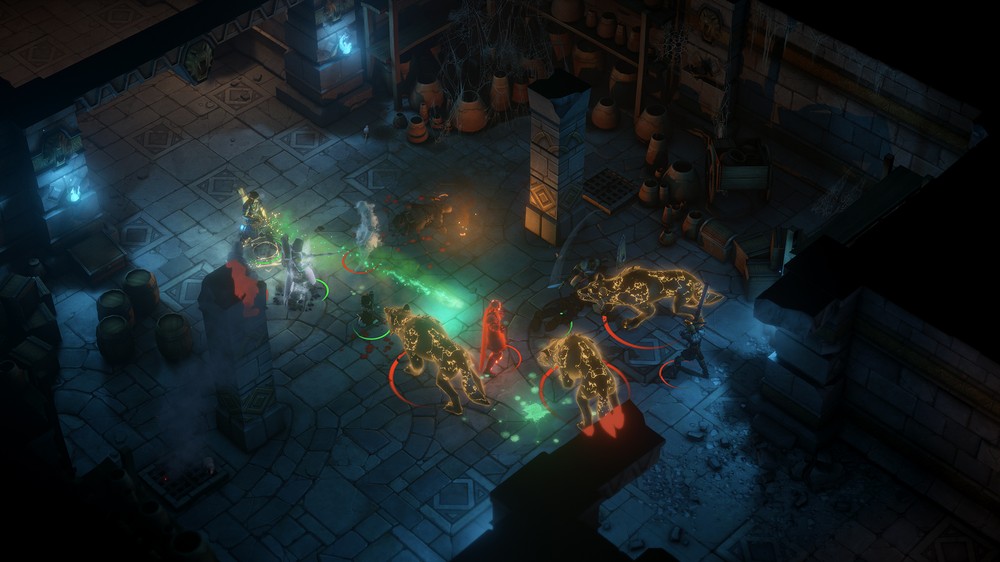 Alongside this variety of gameplay options is a huge amount of player customization, which allows the game to function in whichever way the player wants. Alongside the typical difficulty options, you can choose whether or not over-encumbrance will slow your characters, whether you’re able to revive your party if they fall in battle, and a whole host of other options. You can even choose the speed at which animations play out, with separate sliders for your party and for enemies, meaning that you can exert a good deal of control over how battles look and feel. Pathfinder: Kingmaker goes a long way towards allowing the player to decide on the experience that they want to have with the game, and the ability to change a lot of these settings on the fly means that you’re free to experiment and see what works for you.

Unfortunately, my time with Pathfinder: Kingmaker saw a number of issues, and while none were explicitly game-breaking, a number were definitely immersion-breaking, which was especially frustrating for a game that was otherwise excellent at presenting a believable world and delivering an interesting story. The most frequent issue, partly because of the locations it happened in, was persistent slowdown, especially within the market area of the capital city but also present in any area that had more than a few AI characters. I also ran into instances of text failing to populate properly, instead presenting ‘Unknown Key’ messages, as well as noticing a few spelling errors in the text that did display correctly. Most baffling was an issue with my manually saved games, where loading them would start up a loop of reloading the starting menu screen instead of my game. Thankfully, Pathfinder: Kingmaker has a fairly frequent autosave function, but I’d still recommend cycling through a number of manual saves as I always felt a little mistrustful of the game itself. 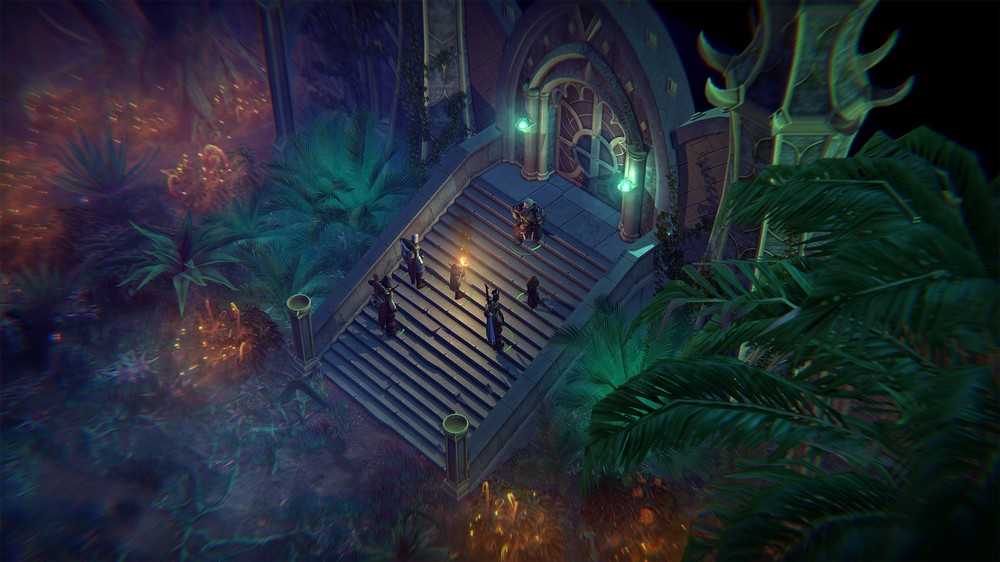 These issues were never enough to dissuade me from playing the game, and even when my console was shut off, I frequently found myself thinking about the game, be it companions, quests, or planning out what I was going to do with my kingdom when I had the controller in my hands again. Your choices and decisions feel like they have consequences and impacts, and it feels like not all of these consequences will show themselves immediately after you’ve selected an option on-screen. As previously mentioned, this feels like a world that is far larger than your cast of characters, and though your decisions will have some impact on the world around you, there’s an impression that you’re only a small cog in a much bigger machine.

Despite a number of frequent and frustrating issues, I found myself consistently enjoying my time with Pathfinder: Kingmaker, and though a large number of the quests perhaps aren’t as memorable as those found in some other famous games of a similar ilk, I found that Kingmaker does an excellent job of presenting a world that I wanted to be involved in, and one that I felt that my character and the characters around him lived in and had an effect on. Despite having played for enough hours that would have allowed me to complete any number of other games multiple times, I still feel like I have plenty to see within the world of Kingmaker, and the inclusion of further downloadable content only makes that world larger. I’m excited to play more of Pathfinder: Kingmaker, and fans of the RPG genre would be doing themselves a disservice if they didn’t at least check Kingmaker out. 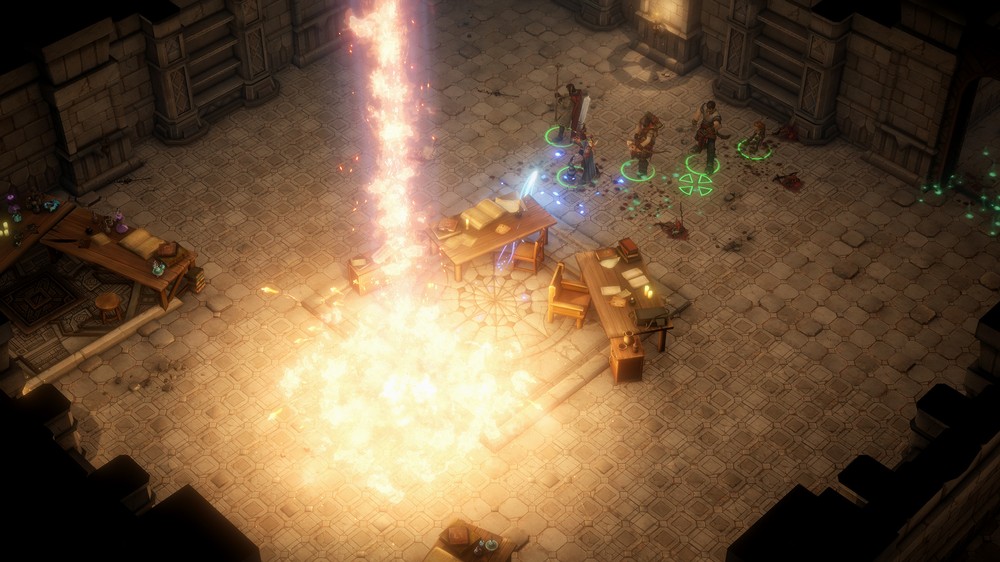 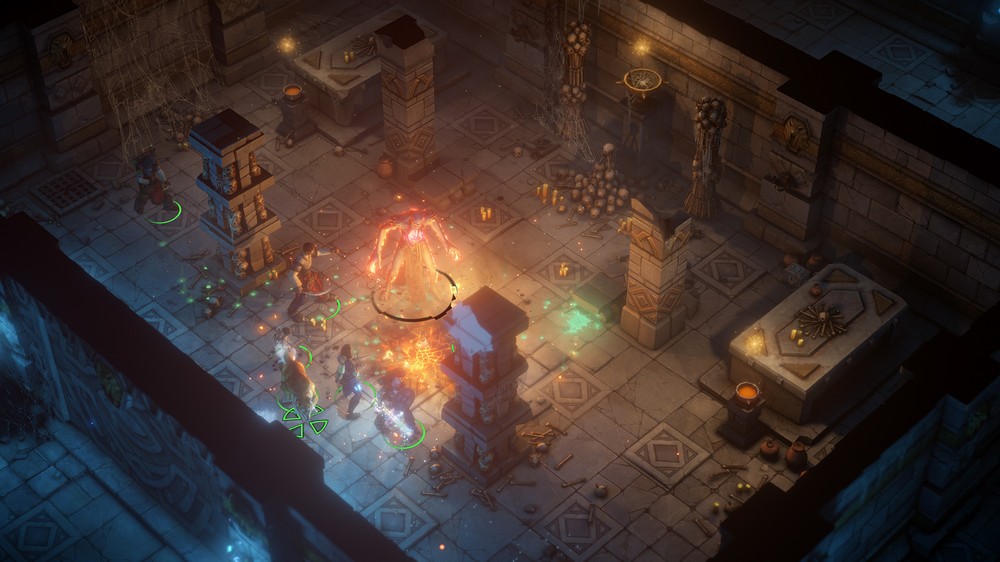 Includes the base game, new features plus 6 DLCs.