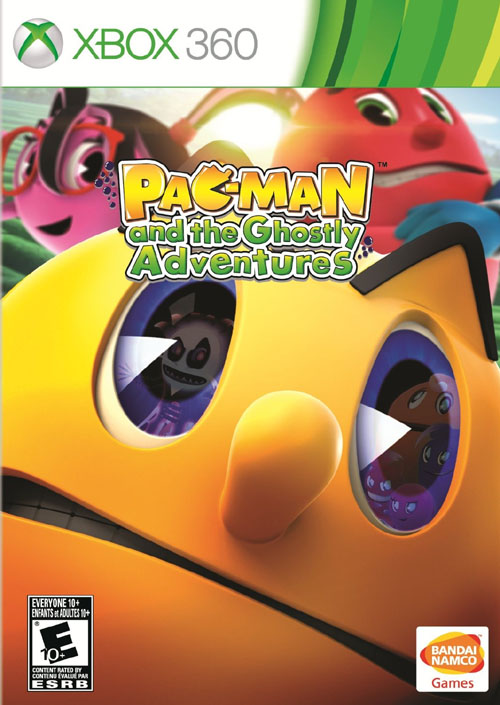 Confusing and forgettable story, poor voice acting, and a bit slow getting started

Pac-Man and the Ghostly Adventures will not win any awards for original gameplay, but it is a highly polished anthology of all the best gameplay elements of platform gaming over the past 20 years.

Over the past three decades, the folks at Namco Bandai have made numerous attempts to keep their iconic Pac-Man franchise in the minds and hearts of gamers.  What started as a very simple concept – collect all the pellets scattered around a maze and avoid the ghosts – has taken a number of twists and turns over the years.  In that time, Pac-Man has made appearances in a host of platform games, racing games, fighting games, puzzle games and more – but time and time again, it seems to come back to the original maze-based gaming of the 80’s that gamers really crave.

But that won’t stop Namco from continuing to try to milk every last bit out of the yellow pellet chomper, and so we have a new platformer on the shelves titles Pac-Man and the Ghostly Adventures.

I was a big fan of 1999’s Pac-Man World on the original PlayStation.  The title was what we call a 2.5D side-scrolling platformer which saw the legendary Pac-Man and friends breaking new grounds in gameplay.  But as for the two Pac-man World follow-ups, I was not so impressed, nor was I with the recent DS/Wii title Pac N Roll. 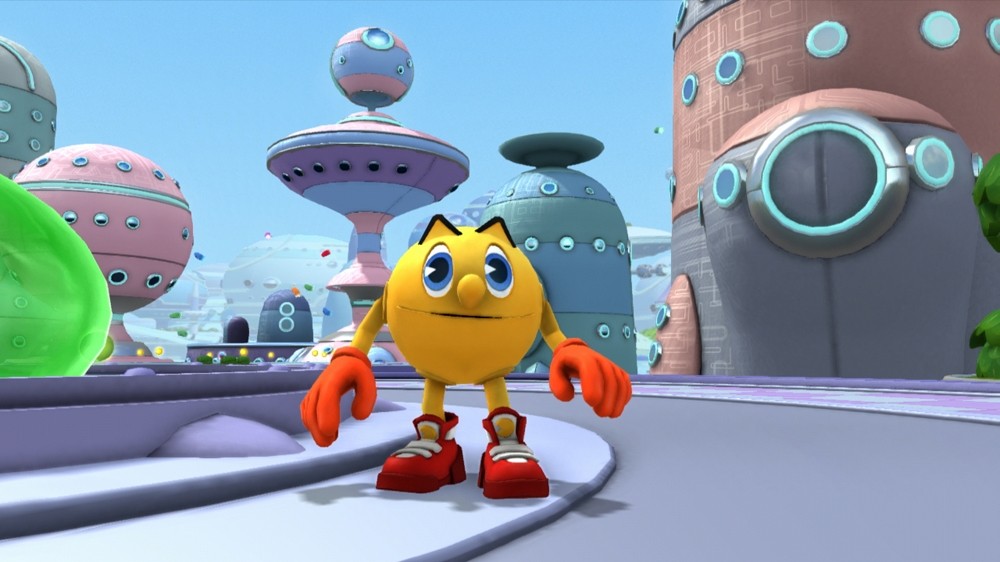 As such, I was not expecting much from Ghostly Adventures – and for the first half hour or so my low expectations were met.  But the more time I put into the game, I began to realize that the game had secretly incorporated gameplay elements of platformer classics – games like Super Mario Galaxy, Ratchet and Clank, and even some Lego Batman.  Suddenly what seemed like another boring, cookie-cutter platformer had me glued to the screen just like those classic titles.

The events take place largely in and around the grounds of a school in the town of Pacopolis.  This school serves host to the likes of a young Pac-Man (the game refers to the older games as the “Legendary Yellow Ones” – nice), his Pac-People friends, and a multitude of ghosts – not all of which are enemies.

The story is a bit confusing and frankly quite forgettable – there is something about an old war between the Pac-People and the Ghost Army of Dr. Betrayus.  The Pac-People were victorious in that war, and Betrayus and his army being were banished to the Netherworld indefinitely.

Now, many years after the war, our young Pac-hero accidentally unleashes the evil Dr. Betrayus, who returns bent on releasing his army of Netheworld soldiers.  As the last of the Yellow Pac-People, our Pac-Man protagonist “Pacster” finds out that as a direct descendant of ancient warriors, he holds special transformative powers and is tasked with capturing the villainous Dr. Betrayus and returning him to his prison deep in the Netherworld. 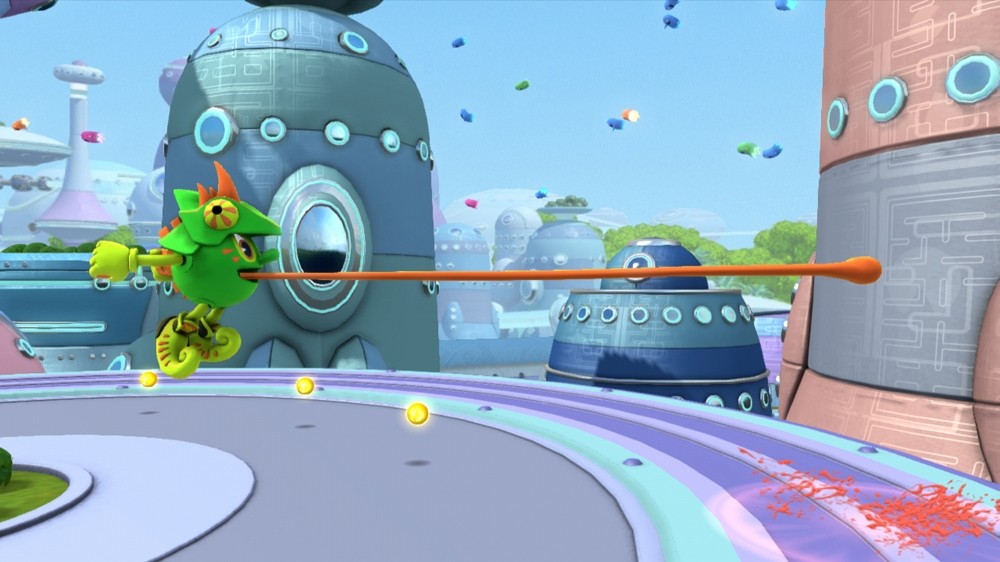 Yes, with a title like Pac-Man and the Ghostly Adventures, an evil overlord banished to the Netherworld, and a young schoolboy with extraordinary powers – the Ghostly Adventures has a bit of a Harry Potterish twist to it, doesn’t it?  Well, that’s not all that bad – it could be worse.  The game is actually a tie-in to a cartoon series airing currently on Disney XD – I was not aware of this at the time of this writing, but I will definitely be checking it out.

The gameplay starts off slow, with Pacster simply going through the gaming motions; collecting pellets and other items, all while eating the random ghost.   While this is the standard fare for a platformer’s opening levels – a training mission to allow gamers to get a feel for the controls – after the first twenty minutes of the same old same old, it starts to look like this is as good as it gets.

Thankfully it is not as good as it gets, because once the game starts introducing transformative “Power Berries” things get really fun.  For instance, take the Chameleon Berry – which allows Pac-Man to move stealthily through environments by changing his color like camouflage and use his long sticky tongue to grab objects.  Then there is the Inflate Berry, which blows Pac-Man up to a gigantic floating ball that he maneuvers using power farts.  Seriously, folks – power farts – and that’s only the beginning.

In fact, there are nearly two dozen Power Berries in all, some making modest stamina changes, some drastically changing Pac-Man for specific tasks.  Half the fun of Pac-man and the Ghostly Adventures is exploring all of the transformation powers.  I really was drawn into seeing just how the different powers could be exploited in the game, and it definitely added a new dimension of gameplay that I haven’t experienced since Super Mario Galaxy. 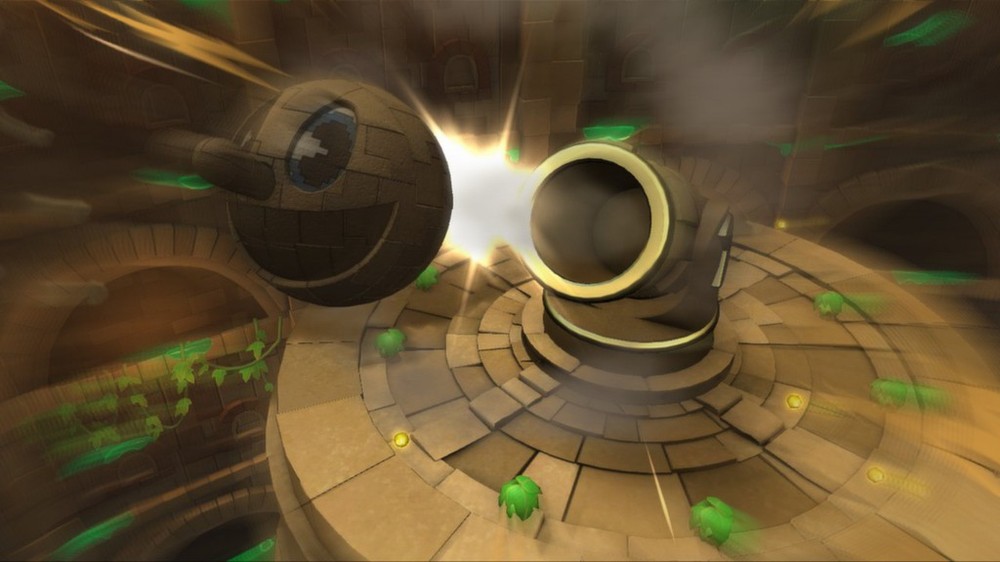 Visually, one would be forgiven for mistaking Pac-Man and the Ghostly Adventures for one of Insomniac Games’ PlayStation-exclusive Ratchet and Clank titles – I know this is an Xbox 360 review, but for any PS3 gamers, Ghostly Adventures’ futuristic environments and overall level design are nearly identical to Insomniac’s classic franchise.   As any fan of Ratchet and Clank can attest, the overall aesthetic is absolutely gorgeous, and delivers a fantastic sense of size and scale.

Ghostly Adventures doesn’t just draw influence from the Super Mario Galaxy and Ratchet and Clank franchises– it also incorporates trademark gameplay elements of other titles; the breakneck blind runs of Crash Bandicoot, the wall-walking goodness of Lego Batman, and plenty more – nothing in Ghostly Adventures is new, but it is done well.

The voice acting is not the best, but the excellent and humorous written dialog more than makes up for any shortcomings.  Nostalgic Pac-Man sound effects riddle the audio landscape, making the ordinary seem a bit extraordinary.

Probably the best part of the game is the local multiplayer component, which returns to the old school maze navigation, but from the perspective of – get this – the ghosts.  Yes, for the first time in a Namco Bandai game, up to four gamers get a chance to play as ghosts: chasing down a bot-driven Pac-Man, avoiding him as he eats power pellets.  The chance to view the traditional maze-based gameplay in a 3D perspective from the point of view of the enemy is a fantastic experience.

Xbox Live support is limited to Friends list, Achievements, and Leaderboards – there is no multiplayer to speak of.  This means that the best part of the game has to be played locally to be fully appreciated – but sharing a couch with a friend is not the worst thing in the world.

I found myself pleasantly surprised by Pac-Man and the Ghostly Adventures.  It might not be the most original platform gaming experience, but what is here is thoroughly enjoyable. 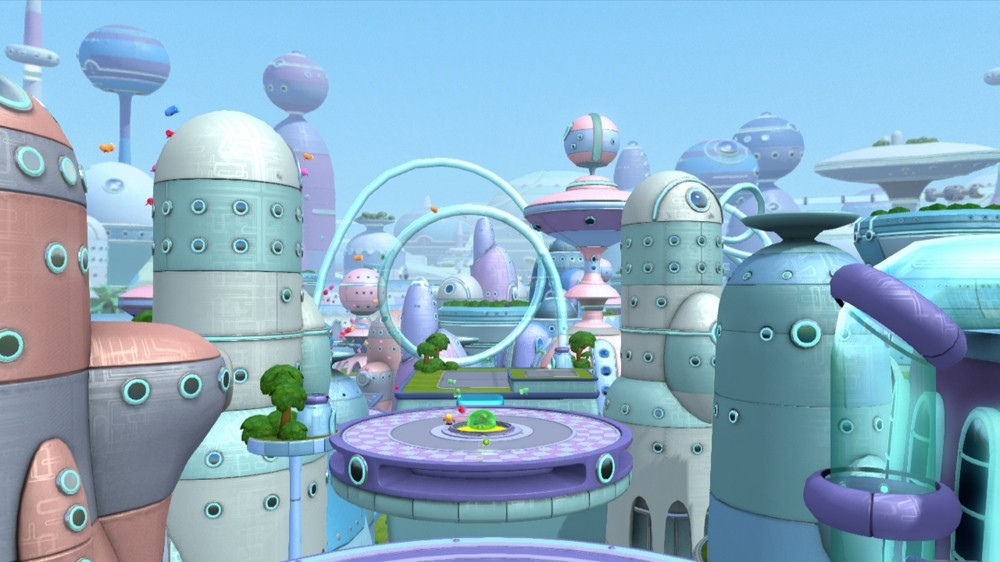 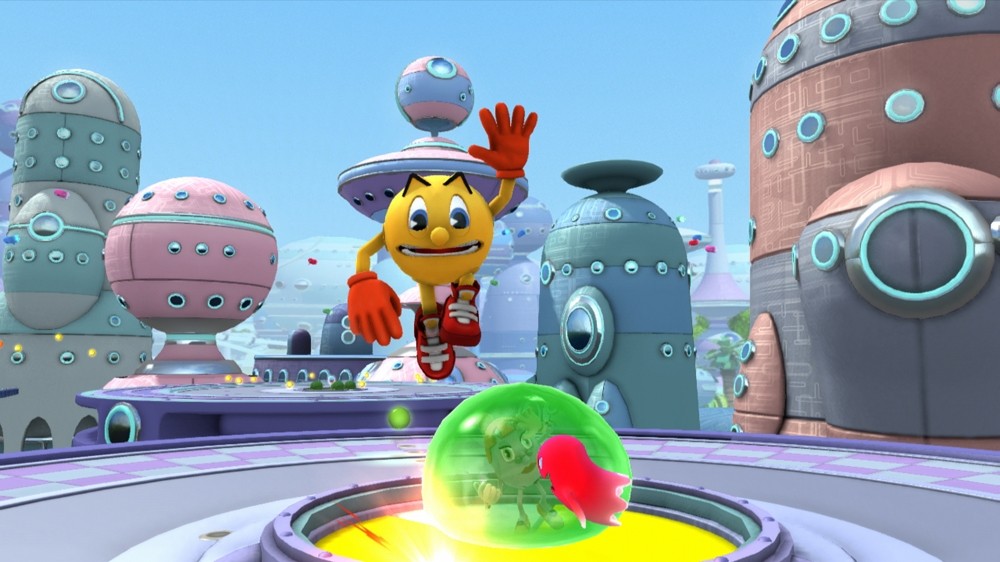 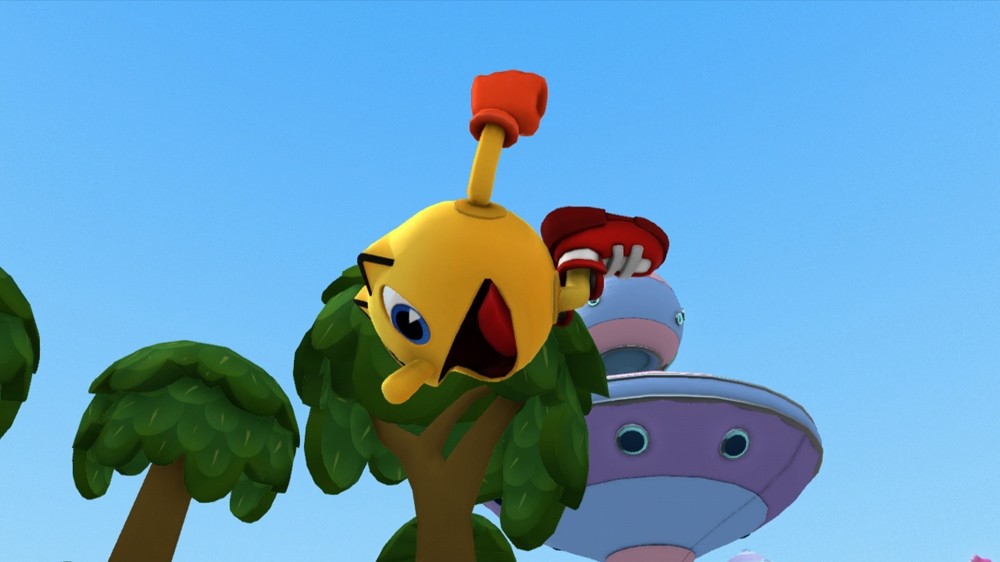 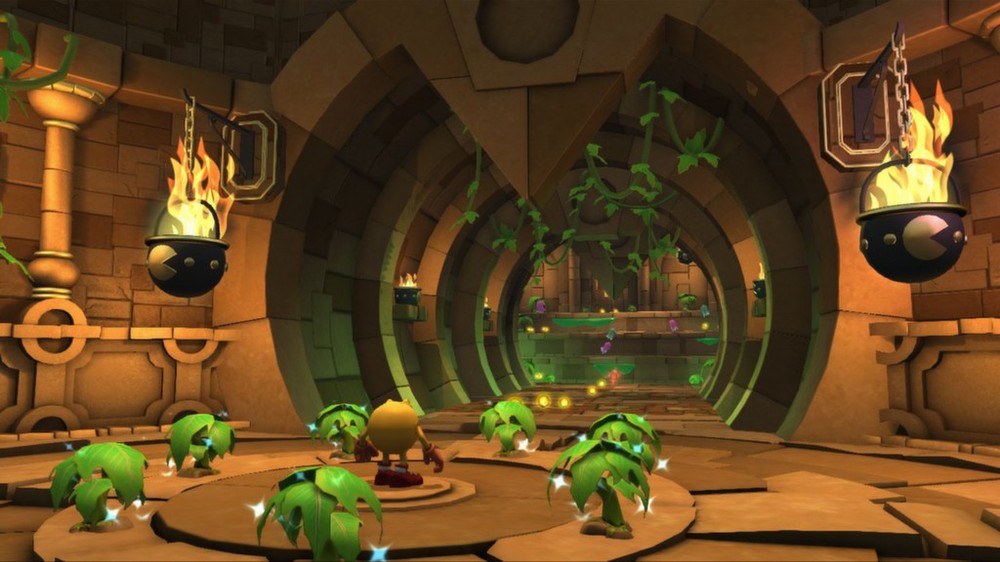 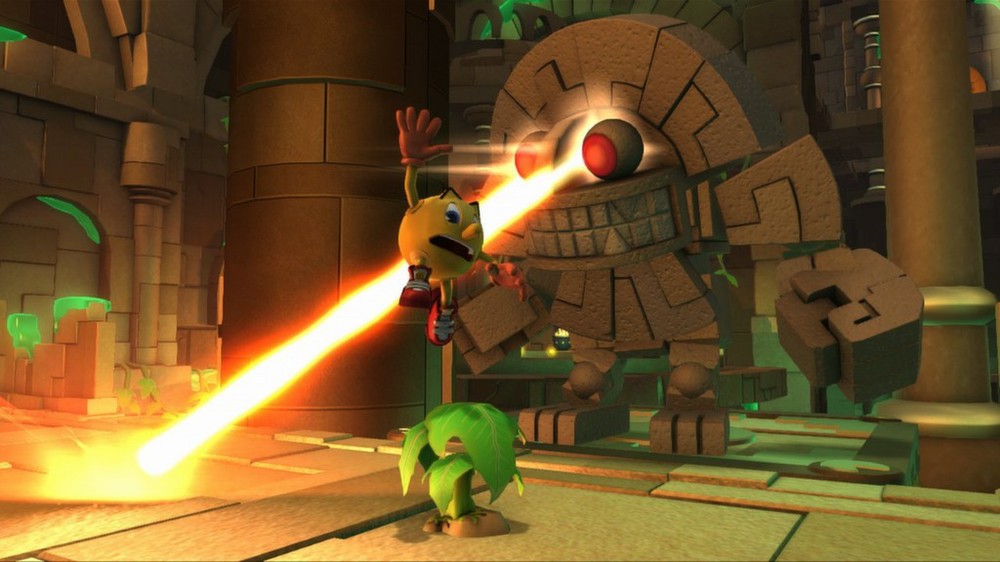 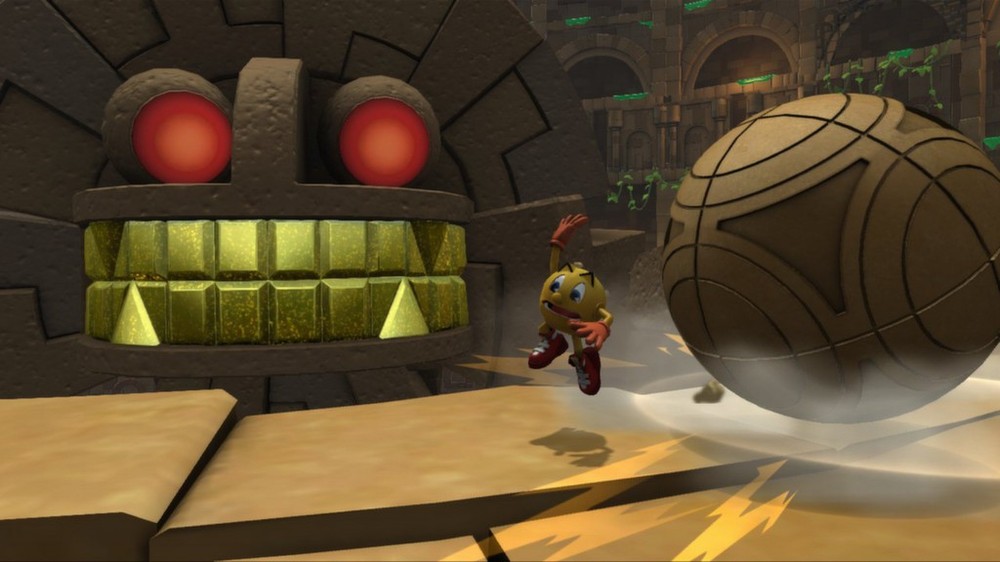 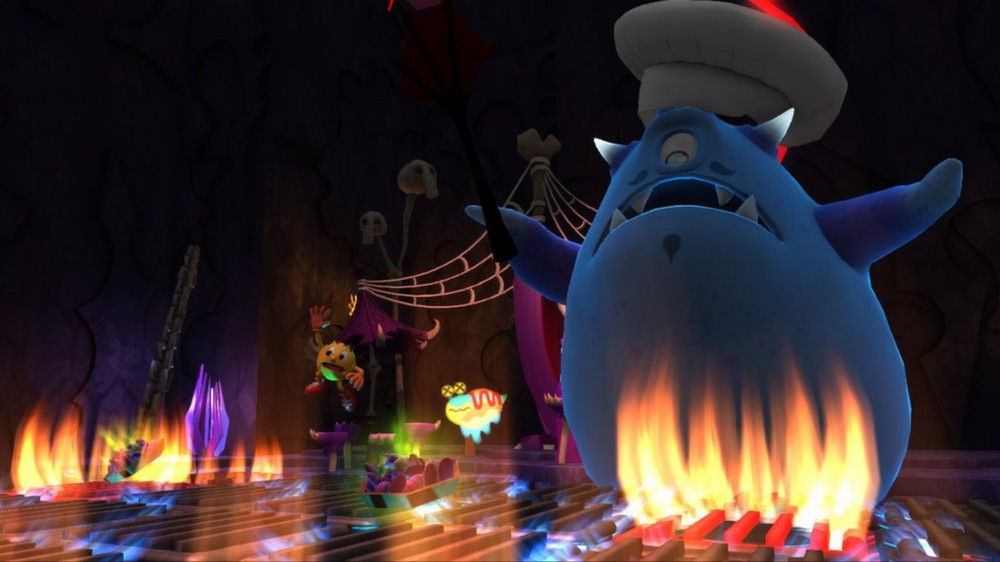