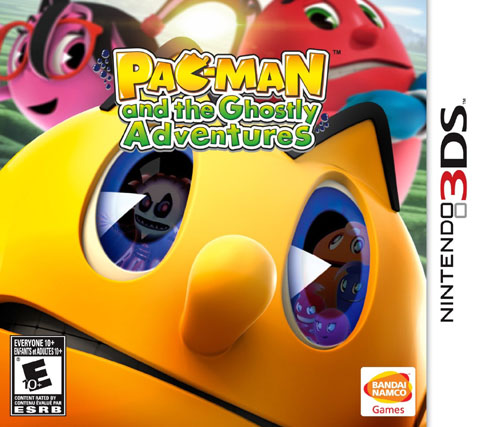 Lame attempt at a story

Pac-Man and the Ghostly Adventures may not appeal to all gamers – but more than a few doubters will be pleasantly surprised by the unique gameplay in this 2D side scrolling adventure.”

After having played through Pac-Man and the Ghostly Adventures on the Xbox 360 recently, I was a bit forlorn over the thought having to retread the same story on a smaller screen of the 3DS.  Not that I wasn’t impressed by the Xbox 360 version of the game, in fact I was quite impressed by it – but it is often hard to be completely objective in any review when playing a game the second time through, especially when playing on a less-powerful handheld.

So you can imagine my surprise, and my elation, when I discovered that while the 3DS version of Ghostly Adventures follows pretty much the same storyline of the Xbox 360 title, the gameplay differs so greatly that it feels like a completely different game.

The most noticeable difference is the change in perspective – other versions of the game take on a third-person perspective, whereas on the 3DS the gameplay is largely 2D side-scrolling action.   But where gamers might think this to be a cop-out on the part of the developers, it actually introduces some really interesting gameplay mechanics that hearken back to a certain cult-classic title that I am sure most of the younger gamers out there have no clue ever existed.

The game that I’m talking about is Astro Boy: Omega Factor on the Game Boy Advance.  If handheld gamers have never experienced this cult classic side-scroller developed by the gameplay geniuses at Treasure and Sega’s Hitmaker Studios.  The title revolutionized character-based side-scrolling gameplay with its unique aerial combos and character modifications.  Ghostly Adventures reminded me of this favorite title so much, I actually had to dig out my old Game Boy Advance SP just to give it another whirl and sure enough both titles complement each other perfectly. 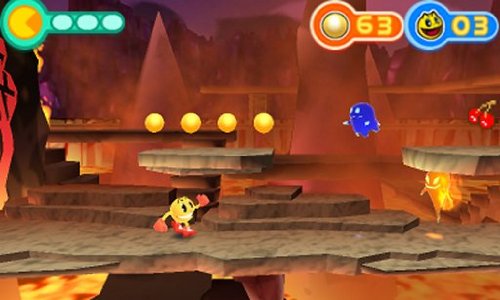 Of course, there is a certain appeal to the Pac-Man inspired visuals representing various environments in and around Pac-Man’s home of Pac-World.  The story – which puts the high school aged Pac-Man and his friends Cylindria and Spiral (neither are actually the shape that their names imply, ironically) against the evil powers of the ghost overlord Dr. Betrayus (cute, eh?) who has opened a portal from the Netherworld unleashing hordes of nasty ghosts that are bent on taking over the planet.  To make matters worse, he has stolen the Tree of Life – an essential component of Pac-World that Pac-Man and crew set out to retrieve.

The most fantastic gameplay element the developers have included in the gameplay is the use of Power Berries that are scattered throughout the game.  These berries give Pac-Man the ability to be modified and transformed into a number of different forms that come with special powers and abilities.  For instance, the first berry the gamer encounters is the Metal Berry which transforms Pac-Man into a cool-looking metal ball with a magnetic attack that draws in all surrounding ghosts, allowing Pac-Man to expertly dispose of them in a single gulp.  This move is handy for the obvious reasons (plus it gives a max score for each ghost), but the real handiness comes in its ability to draw ghosts through walls, effectively eliminating enemies before they even see Pac-Man.

There are berries for freezing ghosts, berries that turn Pac-Man into a sticky-tongued chameleon, and many more.  These are where the similarities to Treasure’s fantastic Astro Boy really take form, with the special powers allowing Pac-Man to take the fight into the sky realm and decimate ghosts in rapid succession with his sweet aerial combos.  The mechanics force gamers to tap into a zen-like rhythm and fluidity in order to reach the most distant enemies (and hidden loot). 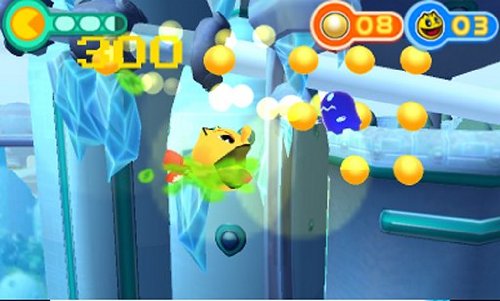 Visually, the game looks great on the 3DS, with characters exhibiting fantastic shading giving everything a great sense of depth and structure.  Things can get a bit frantic, especially when the screen if filled with enemies and the game jumps to a pre-rendered Pac-Man power pose as he hits certain multi-ghost combos.

None of the enemies are all that difficult on their own – the real difficulty come in the numbers that attack simultaneously (making the power berries all the more important), one by one ridding Pac-Man of his heart-meter (hearts can be refilled with sweets left throughout the game).  The game is also laden with pitfalls and other “untouchables” such as electricity and fire that will instantly elicit the familiar Pac-Man death sound.

The levels are divided among the requisite elementals – fire, ice, etc. – and gamers are motivated to return to prior levels to obtain hidden objects and special items that become available after certain powers have been gained.

The in-game dialog is delivered primarily through on-screen text, although the onscreen characters are allowed single-word exclamations and utterances to add emphasis.  For instance, the onscreen text may say “I think not…” while at the same time the character will shout “No!”  It is an interesting, yet effective vehicle for telling the story, and allows gamers to quickly tap their way through conversations.

But if the storyline is the only knock I can find against Ghostly Adventures, then that is a pretty good indication that Namco Bandai has delivered a unique Pac-Man title.  The gameplay might not be on par with the typical Super Mario Bros title, but it is unique and enjoyable, and something the whole family can enjoy. 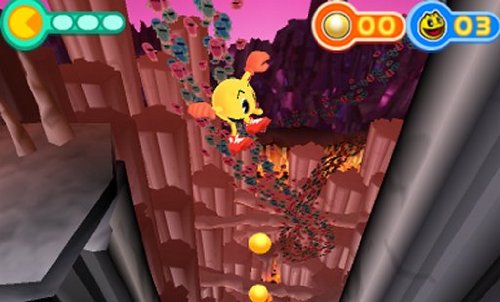 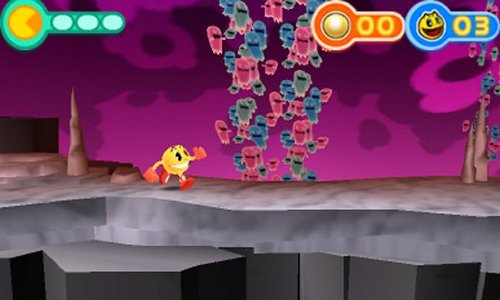 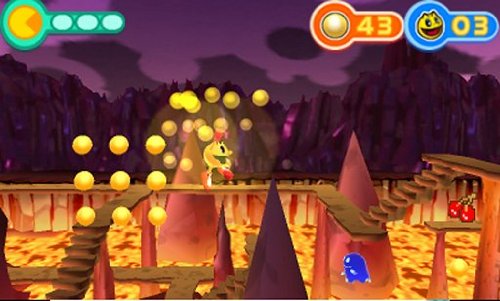 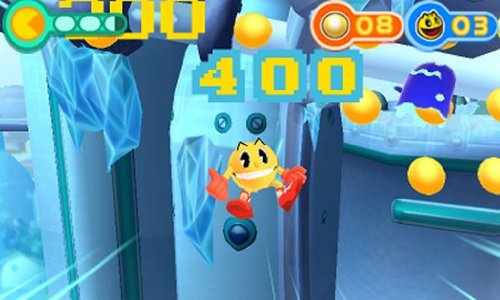 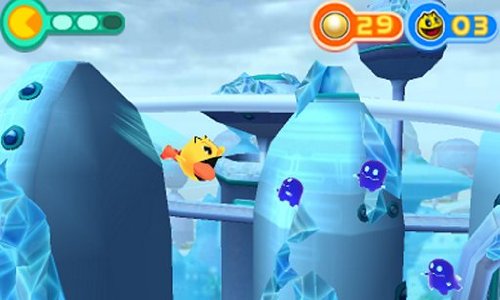 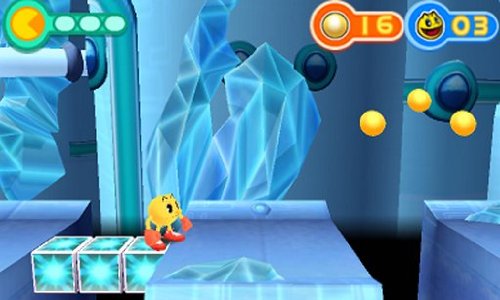 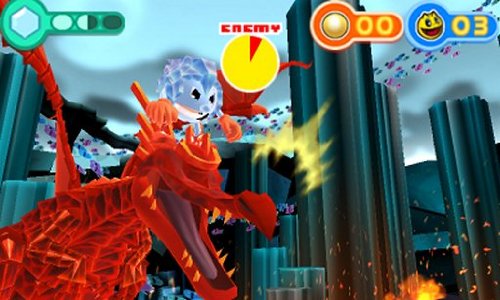 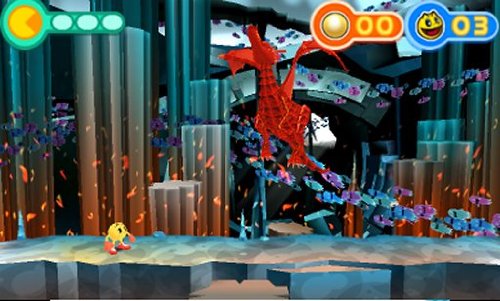