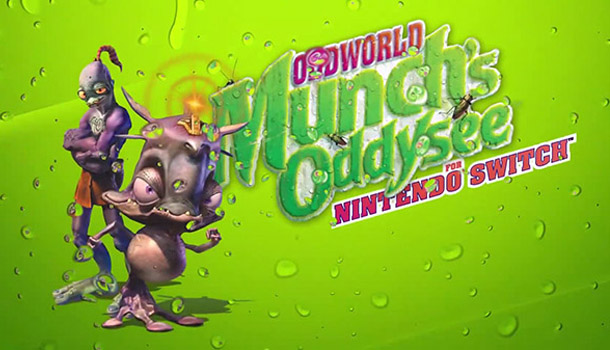 An example of why some games should remain in the past.

It can be a dangerous practice to return to a game that you’ve previously enjoyed, especially if that game is now a number of years old. Graphics and mechanics that once seemed crisp and fresh can now look muddy and feel clunky, and it can be quite disheartening to see a beloved favorite look different from how you remembered it. On the other hand, though, nostalgia is a powerful thing, and it can be used to overlook any number of issues that might seem glaring to a newcomer. I haven’t played Oddworld: Munch’s Oddysee before, so neither of the above factors applied to me personally, but I was well-invested in the gaming scene in the early 2000s, so I do have some idea of where gaming was at that point in time

Munch’s Oddysee was the third game to be released in the Oddworld series, and the first to allow you to play as a protagonist other than Abe, who starred in the first two titles. The titular Munch is the last of an amphibious race known as Gabbits, and having been captured in the early stages of the narrative, he is required to escape from captivity, team up with Abe, and try to bring back his species. Munch’s Oddysee is a pseudo co-operative experience, where a single player takes control of both Munch and Abe, switching between them on the fly and using their respective powers to solve puzzles and defeat a variety of enemies. 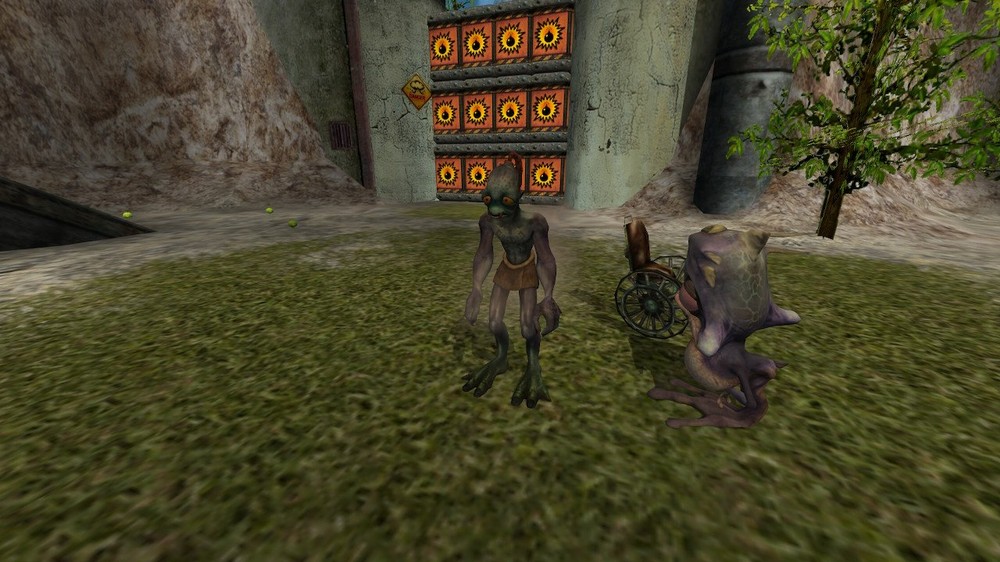 Though Munch’s Oddysee was released a few years after 3D platformers started to emerge, in 2020 it still feels like one of the earlier adopters, and there’s a definite sense of age in the mechanics and what the player is being asked to do. There were certain puzzles where I found that, due to the language of gaming changing so much in the past couple of decades, that I genuinely wasn’t sure how to progress, and had to address a guide to figure out what was required of me. In a similar fashion, some of the design choices are similarly dated, and the tasks given to the player just aren’t that much fun.

One early example gives you the objective of carrying a group of NPCs to safety through a dangerous corridor filled with enemies, which in normal circumstances wouldn’t be too difficult to do. However, Munch’s Oddysee asks you to do the same thing nine times, with no variety in each run, making the whole section feel like unnecessary busywork. This doesn’t feel as much like a cynical attempt to pad out the running time of the game as it does the development team not quite having a handle on what makes a game of this type enjoyable, but regardless of the reasoning, it doesn’t make for a fun experience. 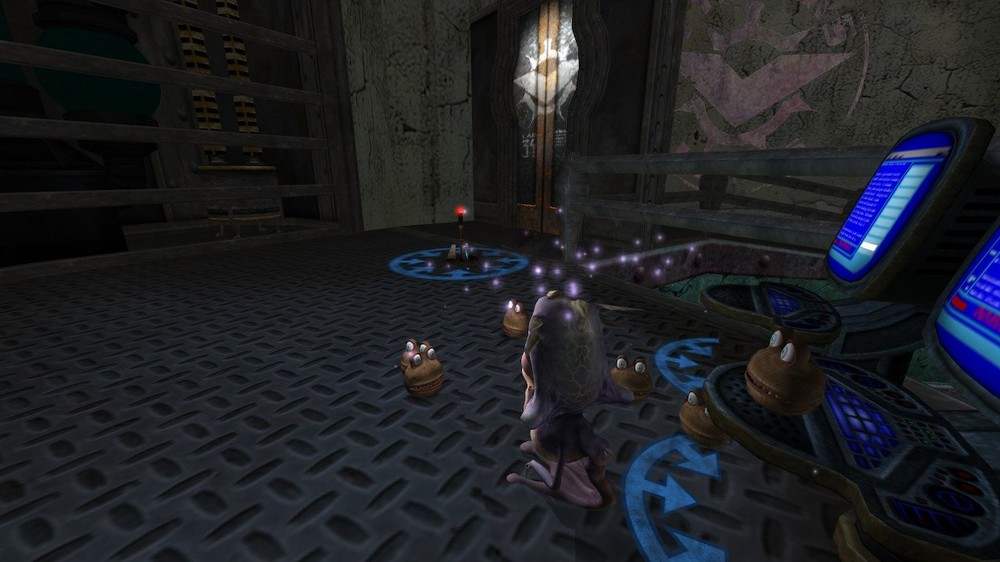 Another giveaway to the age of the game is the fact that Munch’s Oddysee is divided into set levels, with loading screens between each section and a distinct environment and objective for a particular area. I can’t remember the last game that I played with this kind of setup, so initially it was a bit of a novelty to realize the divisions between what I was being asked to do, but I soon realized the downside to this form of progression. Munch’s Oddysee contains no mid-level checkpoints, and though you do have the ability to resurrect either Munch or Abe if either of them perish, if both die at the same time you have to restart the level entirely. With the general lack of direction within each of the levels, I quite often found myself paralyzed with indecision, not really willing to experiment in case of failure, but also not quite sure how to proceed without exploring more of the area.

Despite the frustrations with the age-related problems within Munch’s Oddysee, there were certain aspects that I really enjoyed. The visual design, much like the majority of the Oddworld series, was fascinating and intriguing, and the upscaling of the resolution in this most recent release allows you to see a lot more of the artistic choices, however basic their representation may be. There are some funny moments with the interaction between characters, and for the most part, the mechanics of movement and ordering your allies around is straightforward and responsive. 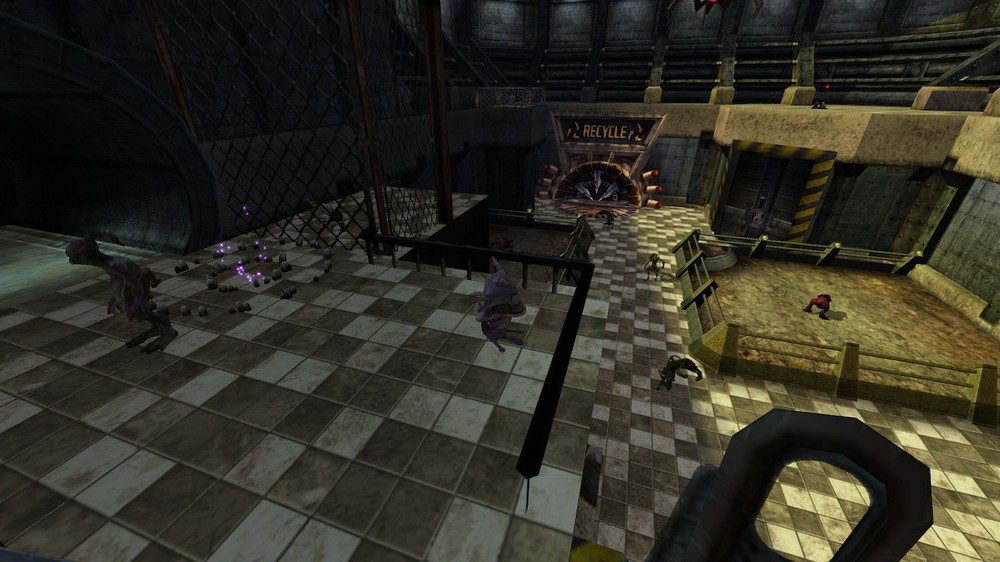 I would recommend, though, to either turn the sound effects down, or play this game with headphones, to save driving yourself or those you live with, crazy. Firstly, it feels like the sound balancing in Munch’s Oddysee is off somewhat, with speech being delivered incredibly quietly (without the option for subtitles) and sound effects being noticeably louder. This isn’t aided by the fact that a lot of the sound effects are quite obnoxious, with the most egregious example being the chanting that comes from Abe’s fellow Mudokons, which happens at regular intervals.

Unfortunate as it is, Oddworld: Munch’s Oddysee is an example of why some games should remain in the past, and why, with the improvements that have occurred in game design in the past twenty years, it can be difficult to return to games that you previously enjoyed. Playing through Munch’s Oddysee was especially disheartening for me because, although I didn’t play the original back in 2001, there are a number of games that I still hold in high regard from that period, and I’m now concerned that the issues that I had with Munch’s Oddysee will be similarly present in those titles, due to their age. 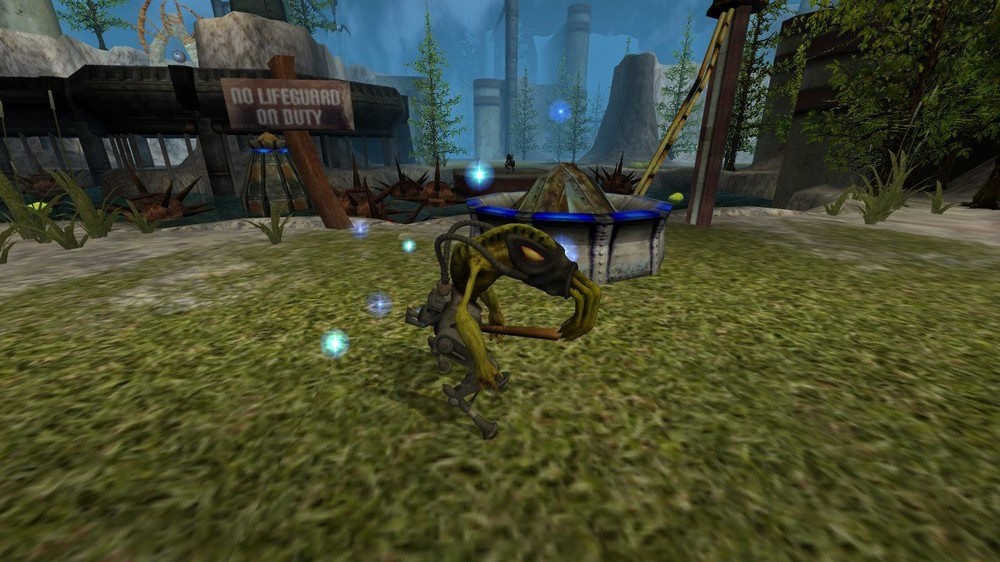 If you enjoyed Munch’s Oddysee when it first came out, you might be able to be carried through on enough of a wave of nostalgia to make it to the end of the game, but for other players, I would find it difficult to recommend this experience, even from a gaming history point of view. Due to the amount of age-related mechanical issues, and the overall sense that the experience outside of that isn’t enjoyable enough to persevere through the frustrations, I personally find Oddworld: Munch’s Oddysee a bit of a tough sell.