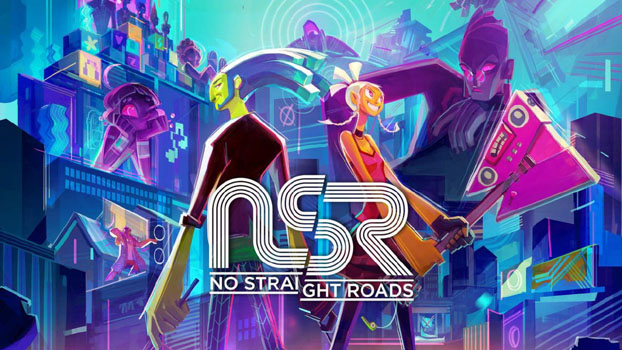 No Straight Roads might be one of the biggest hidden gems of the summer, especially if you don’t hang out on the Epic Game Store – game is also available on all the consoles but for some reason not heavily promoted.  This delightfully designed and surprisingly challenging action-combat rhythm game certainly took me by surprise from the opening intro and tutorial stages to the moment hours later when I stopped playing to let my exhausted fingers recover in order to type this review.

Welcome to Vinyl City, a futuristic metropolis powered by the energy of music, specifically EDM, so it’s no wonder that the largest record label, No Straight Roads, runs the show.  But our heroes, guitarist Mayday and her sidekick drummer, Zuke are about to change all that when they try to revitalize the lost genre of rock and roll with their startup band, Bunk Bed Junction.  The game opens with our musicians entering an America’s Got Talent style TV show complete with awkward video introduction before they head to the big stage to perform in front of six imposing judges. 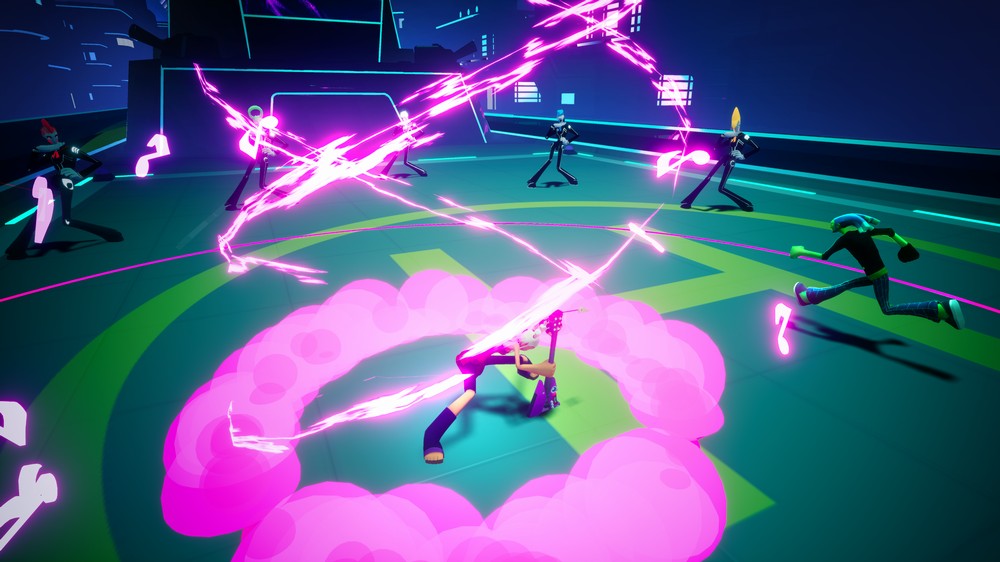 The NSR auditions serve as an integrated and informative tutorial on the controls and rules of the game.  When you aren’t freely exploring the streets of Vinyl City you will be engaged in some sort of combat and the action is directly tied to the beat of whatever music is playing.  Enemies will bounce to the beat before offering up a visual cue that they are about to attack, giving you precious seconds to avoid taking damage.  Between their attacks you can move in for strikes of your own on ground based enemies as well as collecting ammo to fire at flying enemies using an auto-lock targeting system.

Mayday is a brawler, able to swing her guitar for heavy damage while Zuke’s rapid drumming skills allow for cool combos and the ability to repulse certain attacks back on the enemy. When used together they offer a fun and balanced mix of engaging combat as you are able to swap between the two characters as needed.  The AI does a decent job of controlling the other character who will slowly regain health when not in active use, and the game also supports 2-player thus avoiding the need to swap back and forth. 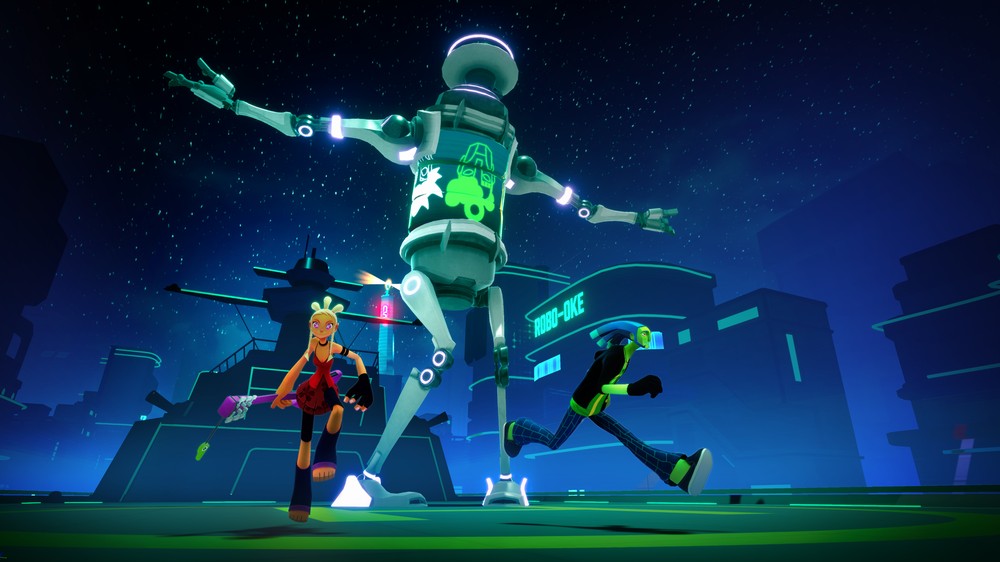 NSR is clearly partial to EDM so Bunk Bed Junction is immediately voted off the show forcing Mayday to start her own rock and roll rebellion based out of their underground sewer lair.  This lair is your hub to all the activities in the game including a crazy Defender-style arcade game.  You can also customize your base with unlockable cosmetics earned during the game, and as you progress in the story additional rooms will be added to your lair, each with their own function and activities.  You can research upcoming enemies and unlock and assign various abilities using the robust skill tree and even feed your pet alligator.

NSR is redirecting power from the general population to power their EDM parties around the city, so Mayday and Zuke must explore the metropolis in search of these energy thieves and defeat them in arena-style combat to restore power to the people.  One of the first encounters will have you going up against this stylish robotic DJ in a massive multi-stage boss fight against him and his minions with combat taking place on a giant spinning vinyl record.  It only gets better from there as the arenas become larger and more complex and more and more enemies are added to each encounter. 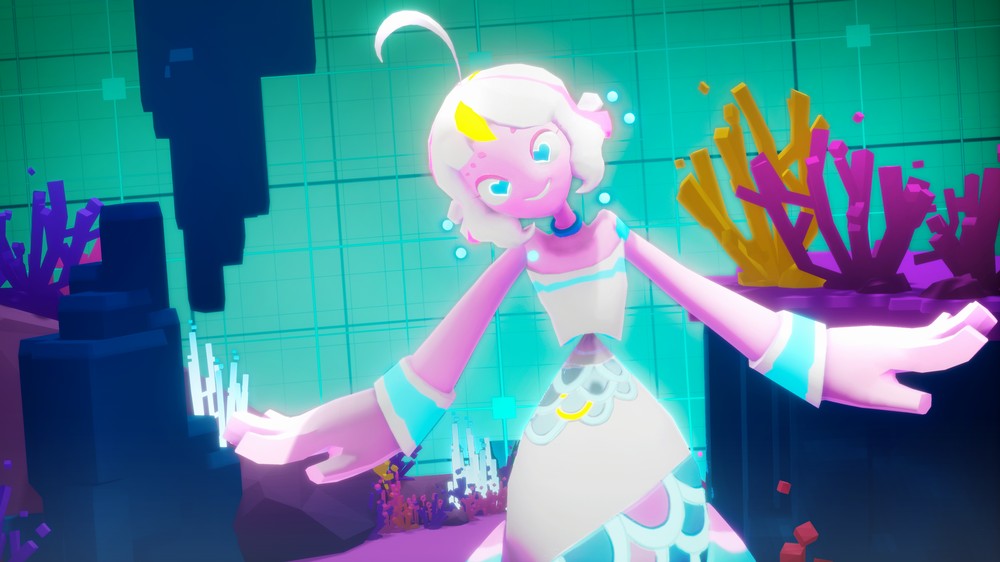 Key encounters are all connected with a maze of streets and alleys full of their own rewards for thorough exploration.  You can spend hours roaming the streets and collecting energy pellets and other loot before focusing on your next objectives.  One nice feature is the ability to replay previous encounters using your own favorite song or perhaps you just want to replay a previous boss fight and try for a better score or checkout various new modes to increase the challenge.

No Straight Roads has a nice difficulty progression with encounters that seem to balance with your abilities.  The game mixes in a variety of enemies to keep you on your toes then mixes these encounters into some massive combat arenas with platforming and rail-grinds flashing me back to the days of Jet Set Radio.  There are some great effects for the various strikes and combos for each character as well as fun combo counters and a meter with a needle that moves between rock and EDM based on your performance.  The screen is alive with action and animation constantly. 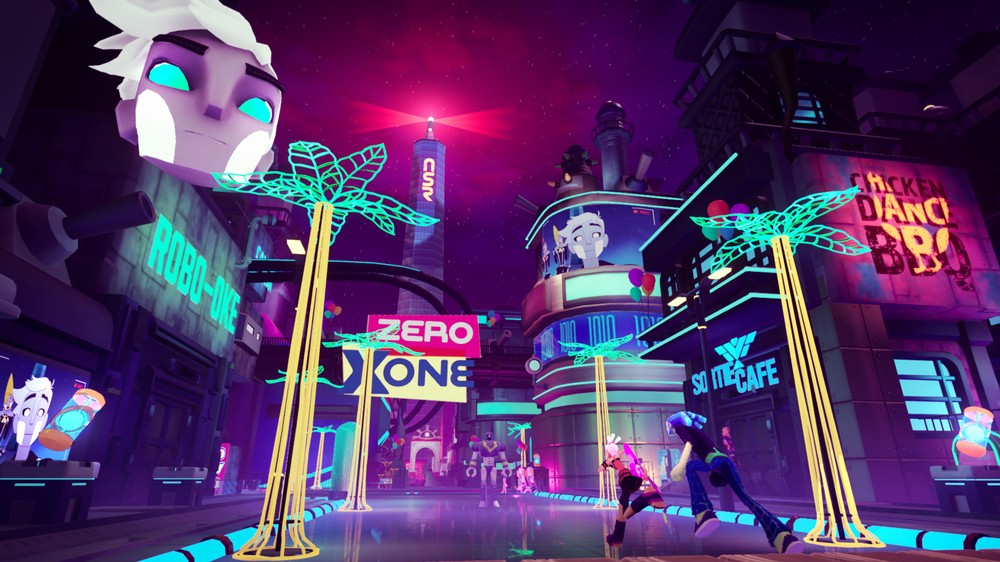 The game design and core loop of exploration and combat is engaging and addictive.  Exploration will unlock new combat abilities that will make you more formidable in upcoming boss battles and defeating bosses will unlock new districts in the city offering more exciting areas to explore.  But in addition to a solid game mechanic is the outstanding presentation for No Straight Roads with its quirky character designs, gorgeous levels, and some of the best use of color I’ve seen in this generation of games.  There are some camera control issues and an odd resolution limit of 1080p; the latter not as much an issue given the art style.  It’s not only a treat for your eyes but you ears as well with some incredible EDM and rock tracks that are uniquely mixed in real-time based on your gameplay.  Even the background music when exploring the vibrantly lit city is enjoyable.  The voice acting is excellent and while some might find Mayday’s squeaky voice a bit annoying I found her unwavering enthusiasm mixed with moments of intense rage quite endearing.

Expect upwards of 12-15 hours to finish the game but you’re likely to spend lots more time replaying those epic battles with new modes and music, and bringing a friend along for some co-op play totally changes the dynamic of the game.  Words can’t hardly do this game justice, so check out the first two hours of the game in our gameplay video and check out the demo in the Epic Game Store to try the game yourself.  If you enjoy stylish art, challenging combat, and high energy music then No Straight Roads is the game you’ve been waiting for.