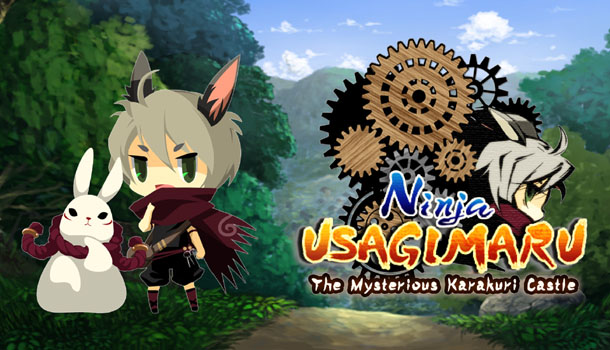 - Too difficult, even from the start
- Fiddly, both in controls and gameplay
- Unforgiving to the point of pedantry

A game for puzzle-game masochists. 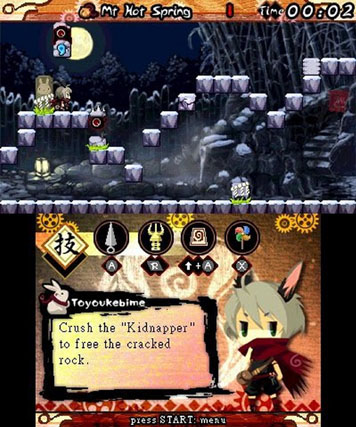 Ninja Usagimaru: The Mysterious Karakuri Castle, released on Nintendo 3DS, is the sequel to Ninja Usagimaru: The Gem of Blessings, which released on the same device back in 2015. Developed by Arc System Works, players take control of Usagimaru, a wandering spirit who, upon returning to his home village, finds all of his fellow villagers kidnapped. By travelling across the land, Usagimaru must rescue these villagers from their abductors, by solving puzzles and leading them to safety.

Ninja Usagimaru plays as a navigational puzzle game, with each stage taking place over a single-screen 2D puzzle. Usagimaru is required to avoid traps and monsters, and use objects in the environment, such as rocks, to access otherwise inaccessible areas and defeat his enemies. However, before doing this, it’s heavily recommended that players plan out their routes and objectives, as one wrong step can lead to failure in the level. Usagimaru isn’t particularly agile, and has an incredibly small jumping ability, meaning that if you haven’t set up an escape route, Usagimaru could well be trapped, requiring a level restart. 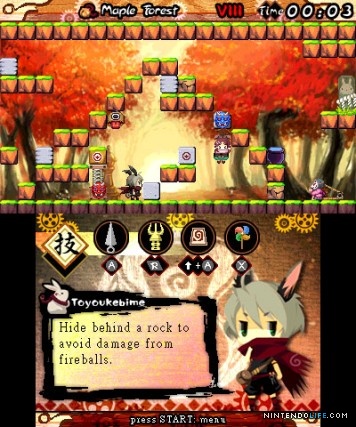 Ninja Usagimaru has a pretty simple control system, and by using a mixture of attacks, blocks, and even a hookshot, Usagimaru can manipulate the environment to get him to where he needs to be. Unfortunately, with the 3DS’s small screen and d-pad, it can be easy to accidentally press a button too many times, or not quite catch yourself before you make a fatal mistake. Ninja Usagimaru is a pretty unforgiving experience, and there will be plenty of times you’ll end up cursing yourself or the game for the smallest of mistakes.

Levels are fairly small, being only a single-screen, but they don’t necessarily take a short time to complete. Some of the more frustrating levels are especially fiddly to navigate, requiring particular actions to take place in a specific order and with good timing, because otherwise you’ll have to start the level over.

Once you get the hang of the game’s mechanics and begin to learn the patience and forethought that the game requires of you, it becomes easier to figure out the best approach for each level, and once you reach this stage, Ninja Usagimaru becomes a game that’s actually quite well designed for a handheld, as it presents an experience self-contained enough that you won’t miss anything by putting it down, but challenging enough that longer play sessions are a viable option. 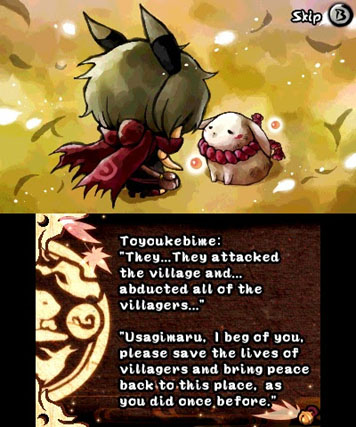 Perhaps the biggest downside to Ninja Usagimaru is that despite offering a lot of content, there isn’t enough variety on offer to encourage most players to slog their way through it. When combined with the above-average difficulty level, it makes for a puzzle game that feels distinctly one-note. This is a game for puzzle-game masochists more than anyone else, and I’m not ashamed to say that there were multiple times when I put the game down feeling like a complete idiot.

On a personal level, my favorite puzzles games are the ones where new elements are gradually introduced over time and by the end of the game you’re solving puzzles with many more layers than you first started with. Ninja Usagimaru doesn’t do this, however. It starts hard, and gets progressively more difficult from there, making for a generally miserable experience. There’s an interesting grab-and-go gaming concept here, but unfortunately it will likely be inaccessible for most.