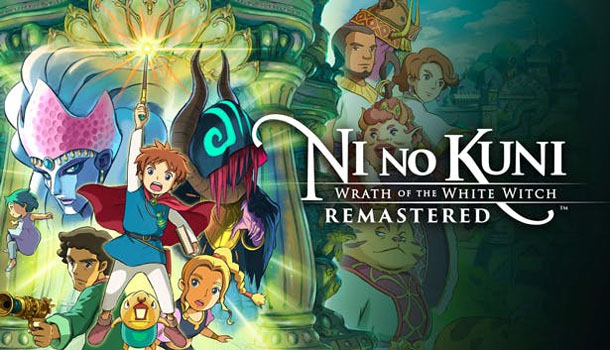 A must play adventure for RPG and Studio Ghibli fans alike.

Back in 2013, I was absolutely blown away by a singular project that bridged the artistic style of anime with the roleplaying game genre. While many RPGs based on anime series have come to pass with varying success none had captured my attention of an RPG that used anime as its storytelling medium like Ni no Kuni: Wrath of the White Witch for the PlayStation 3. I am still a big fan of this game so when I heard that Level-5 along with BANDAI and QLOC were bringing it back in the form of Ni no Kuni: Wrath of the White Witch Remastered I had to see how well it has been updated.

This time around I got to experience this wonderful tale on PC to see how the experience holds up. For those that are just hearing about Ni no Kuni: Wrath of the White Witch for the first time this adventure was a collaboration between Level-5 (of Professor Layton fame) and the legendary animation company Studio Ghibli. With the assistance of QLOC, Ni no Kuni: Wrath of the White Witch Remastered marks Level-5’s second excursion to PC following Ni no Kuni II. This isn’t QLOC’s first port to PC so thankfully my experience was like visiting an old cherished friend. 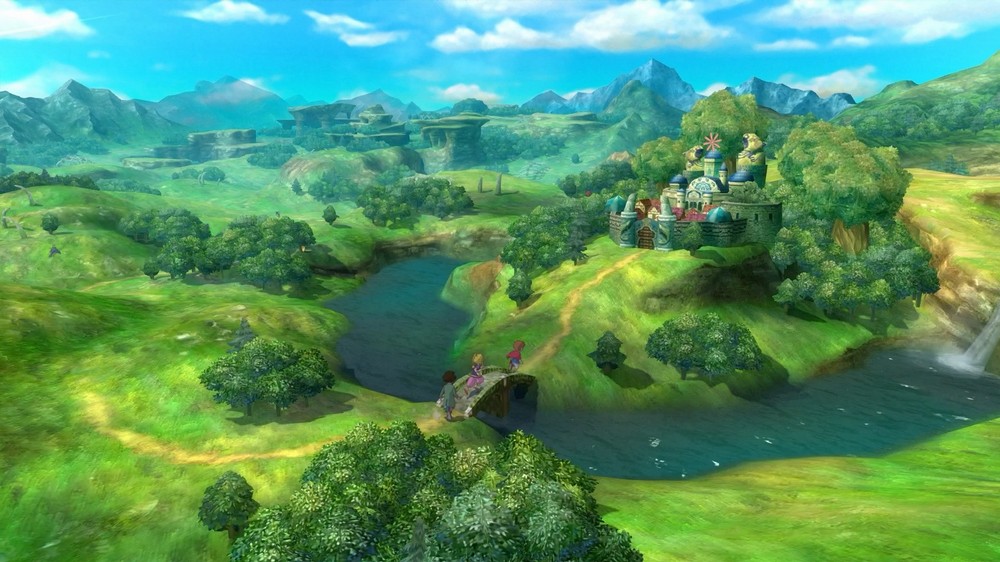 Even after all these years, the journey and story created by these two amazing companies still holds up and dare I say still touches the heart. Even though the original version has been out for a while I still won’t say a whole lot about the story without spoiling the good bits but I will lay out the basics for series newcomers. Much like any good Ghibli film this game is best experienced for oneself.

The story however follows the happy turned tragic life of young Oliver in a 1950s inspired world. After a freak “accident”, Oliver’s mom succumbs to a heart attack after saving her son from a watery grave. Yeah I know this comes off as a bit much but this story may just have a happy ending for the player after all for those willing to stick through Ni no Kuni until the very end.

In true Level-5 and Ghibli form, Oliver awakens a magical fairy in his world. This little Welsh speaking fairy with a lantern as a nose jewelry reveals to Oliver that there is another world from which he came that is in danger. It turns out that Oli-boy, is the Pure-Hearted One, the only one that could save their parallel world using magic as his weapon. As an added bonus for saving their world in true jRPG form, Oliver may have a way to help himself in the process. One of my favorite things about that Ni no Kuni is that the gameplay is a unique mixture of classic RPG elements and some creature training goodness. 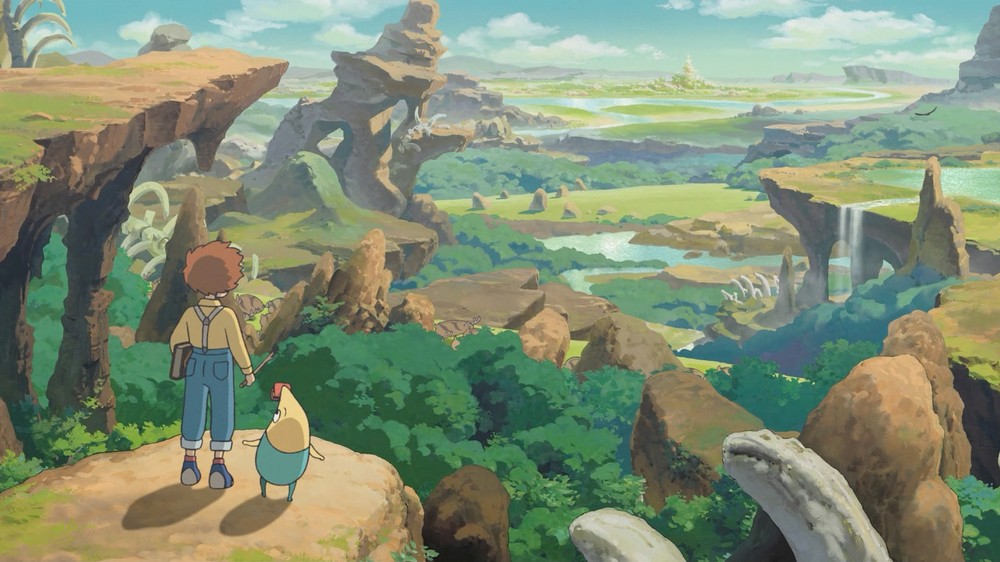 Ni No Kuni is still different than most of the RPGs that I’ve ever played over the years even after its original release. I’m used to just beating the daylights out of any enemy in my way via swords and daggers and the like. In this world the key method of attack is magic, not that that stops Oliver from beating on creatures with his wand. Combat is a nice mix of real-time and turned based action with a few twists. For starters players are allowed to move around the battlefield at will which is fast becoming the norm for modern RPGs. The actual fighting works via a rolodex menu setup and timers which is classic fare.

Whether it’s in a dungeon or out in the world, the enemy count in Ni no Kuni is off the scales. Sometimes it’s downright annoying when you defeat an enemy and take a few steps forward only to have another one standing there when you turn around. But on the bright side it’s a great way to level grind occasionally should the need arise.

The biggest and most welcome feature is the creature training and future capturing that occurs as you hit critical points in the story. You get your first creature, or Familiar, from Oliver’s heart while the rest are earned via story events or added features. Very similar to a certain franchise, these Familiars level up as you use them and can even evolve if given proper attention. The downside is the creature’s level resets back to level one when you do this, but the character’s stronger for it. Some of the creatures you get naturally are pretty awesome like Thumbelemur, but there are a bunch of amazing enemies out there that any player would want on their side. With a little help from a certain character you can catch them and use them in battle. The one thing that makes this game unique is that you share the same health and mana bar as your familiars so if they are defeated so are you. It’s all about managing what abilities to use and when whether it is via Oliver and his friends or their familiars. 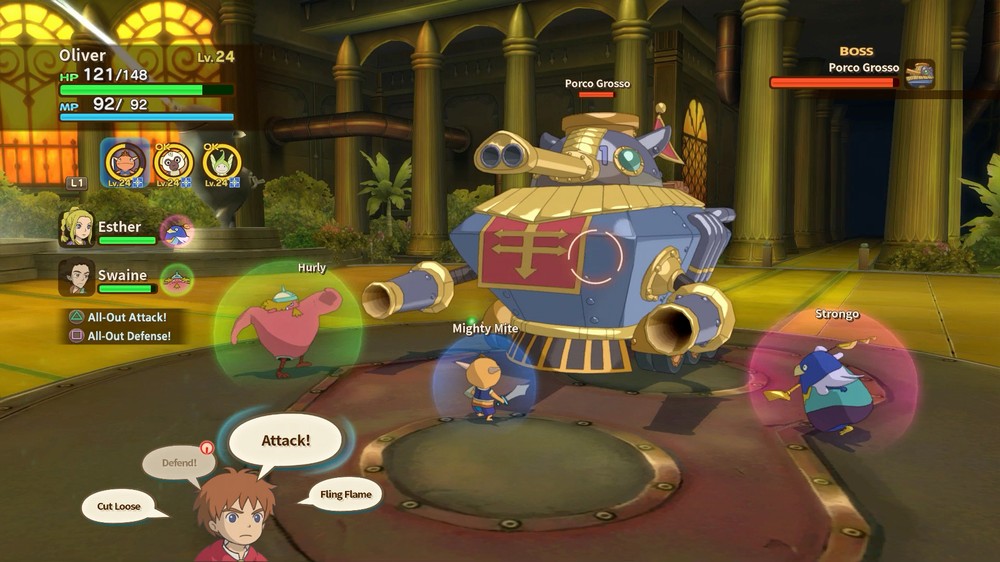 There is more to the world of Ni No Kuni than at first meets the eye. There is a level of emotional elements that ties the two parallel worlds together. One of the main elements in the game is that an evil man has caused discord in the fantasy world resulting in some of its inhabitants losing heart in their everyday lives. Oliver being the little wizard-in-training that he is has to help restore what was stolen from these people on a regular basis throughout the game via magic. For instance if someone is lacking the courage to do something, then he has to find another person in the surrounding area that is filled with an overabundance of it. There are several side quests as well as main story elements that require you to restore people to their former selves usually to some reward. It’s a touching element that I haven’t encountered in any other gaming experience.

Ni no Kuni: Wrath of the White Witch Remastered heavily focuses on friendship, family and helping out others throughout its course and this is ever so apparent in the side quests. By visiting a certain shop in each town you can take jobs for those in need of a little help. Some quests are about curing someone of “broken heartedness” while others will have you collecting items or defeating X number of monsters. Completing these tasks will earn you stamps on a card. Upon filling up a card you can redeem them for perks that will aid young Oliver in his quests such as running faster on the world map. 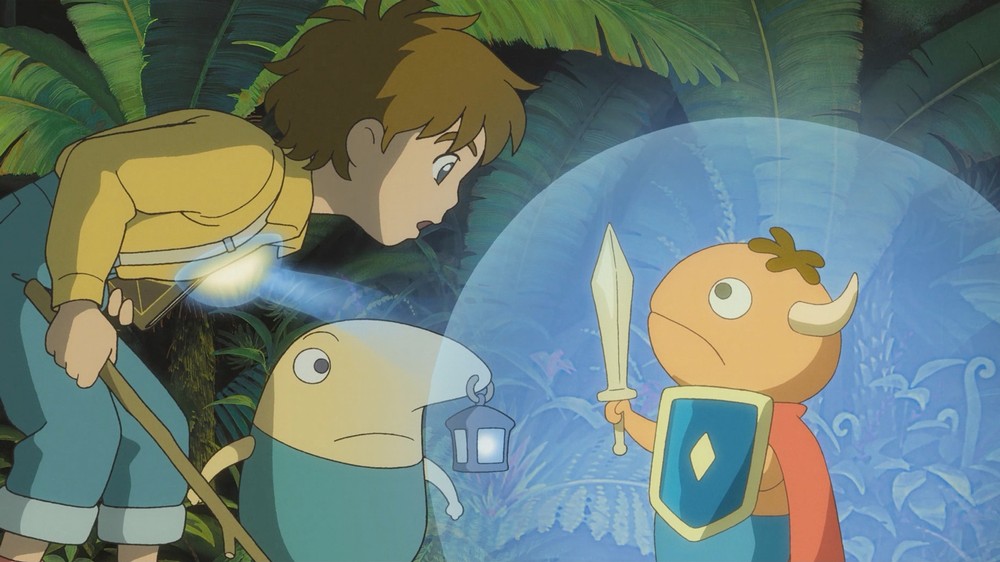 As I said before Studio Ghibli are masters of what they do. One of the main reasons, I love this game so much is that I felt like I was actually in one of their films. The hand-drawn animated sequences alone are absolutely stunning, but it’s Level-5’s ability to take Ghibli’s trademark style and create the world and its inhabitants in 3-dimensional space. Their ability to create and blend these two styles is a marvel itself. The world at large is beautifully vibrant and detailed right down to the monsters and landscape. There are also the little atmospheric nuances such as cloud shadows and light particles that really flush out the presentation.

As this is a remaster we have to talk about the upgrades that make Ni no Kuni: Wrath of the White Witch Remastered worthy of your attention and money. The original graphics were top notch at the time and the work put into this edition shows in both increased framerates and sharper visuals at higher resolutions. Increased from its original 720p resolution the remastered version looked incredibly sharp on both my 1440p monitor and my 4K TV. Of course improved visuals are only part of the remastered package as framerate can be a big problem at those resolutions. Ni no Kuni: Wrath of the White Witch Remastered offers PC players the option to play with uncapped framerates. As PC options go there isn’t much in the way of fine tuning though with FXAA being the only Anti-Aliasing option available to smooth out any jagged lines. 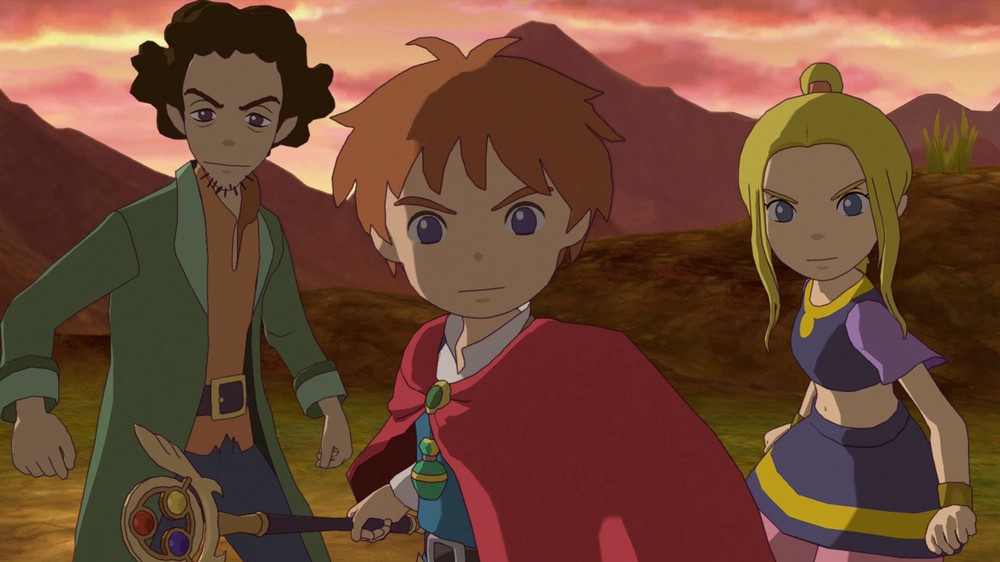 What brought the whole package together outside of its visuals and storytelling was its voice acting and its score. As with the original release most of the major conversations are spoken in either English or the native Japanese. Thankfully both audio tracks are installed this time around on PC so I didn’t have to worry about doing it later if I wanted to hear a Welsh fairy speaking in Japanese like I did with the PS3 version. Much like a Ghibli film there was a sense of believability and wonder brought to life with each character’s portrayal. Through I can say Drippy is still a real doozy of a sidekick.

The score for Ni no Kuni: Wrath of the White Witch Remastered still is everything that I expected in a project involving Studio Ghibli. This largely has to do with the composer chosen for this project which is none other than the renowned Joe Hisaishi. Hisaishi’s trademark style is as instantly recognizable to the ear as is Studio Ghibli’s art to the eyes. It’s only fitting as Hisaishi has scored most of Ghibli’s most successful films to date. Every track be it the exotic Middle Eastern inspired tone of the city of Al Mamoon to the touching theme song is absolutely perfect for Ni no Kuni. I still can’t get enough of the score which you can now buy through various digital services. 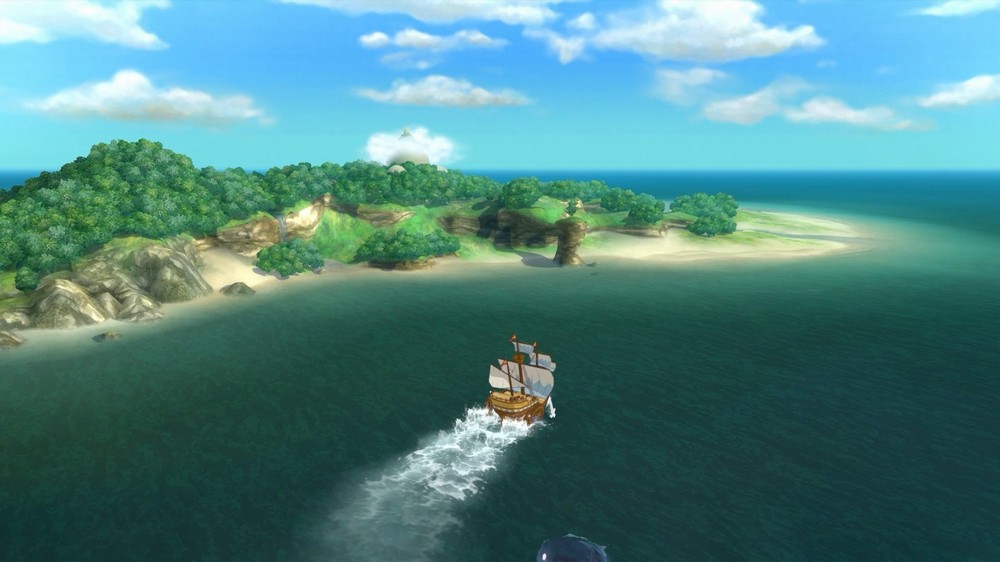 After sinking more countless hours into Ni no Kuni: Wrath of the White Witch Remastered, I remember why this title still remains one of my favorite RPGs of all time. The story still is engrossing right to the end as I felt myself rooting for Oliver and his new friends the whole way even though I already knew the ending. With the newly improved visuals and framerates the fantastic art direction of Studio Ghibli and the attention and craft of Level-5 is still just astounding throughout. I still absolutely love the score and voice acting from both tracks. 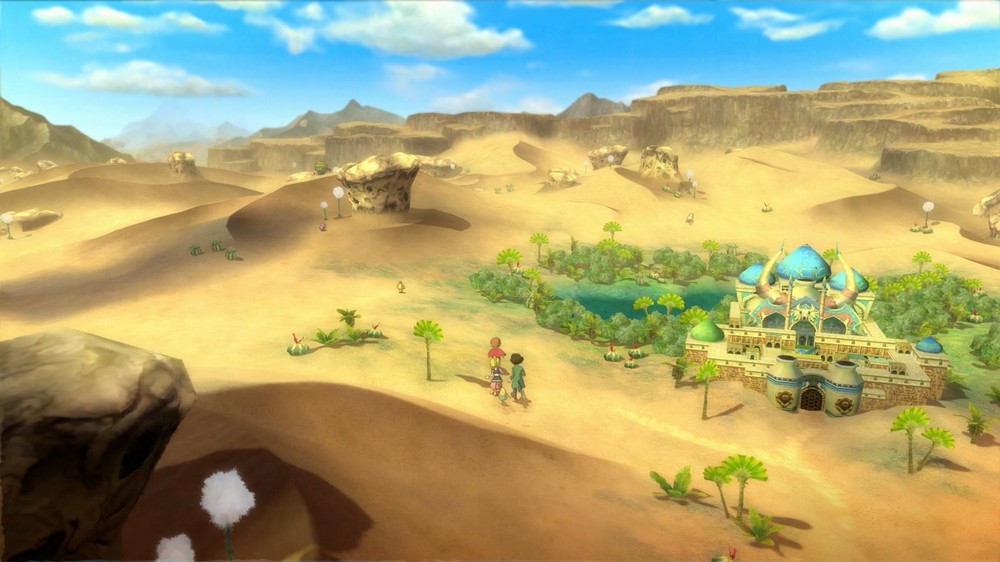 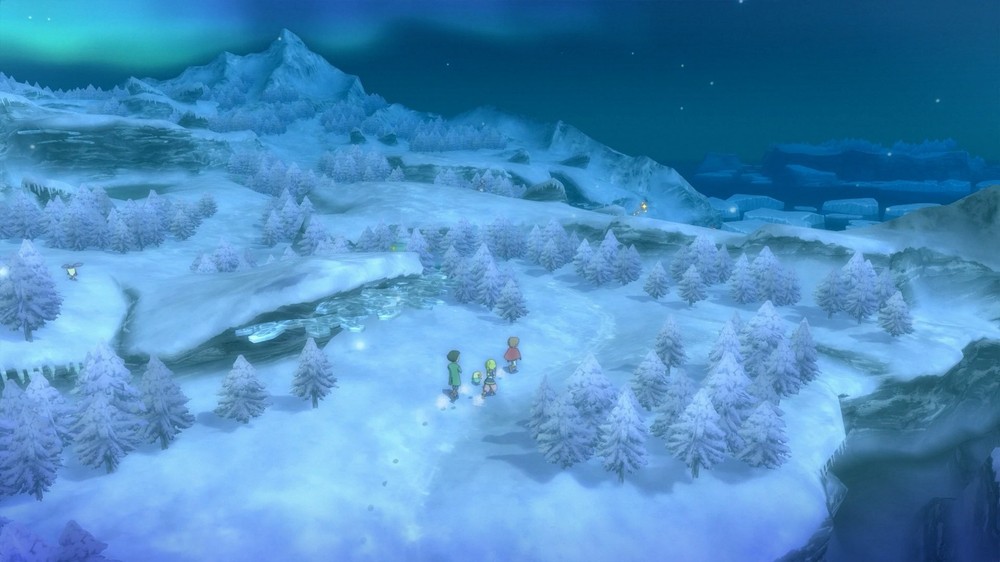 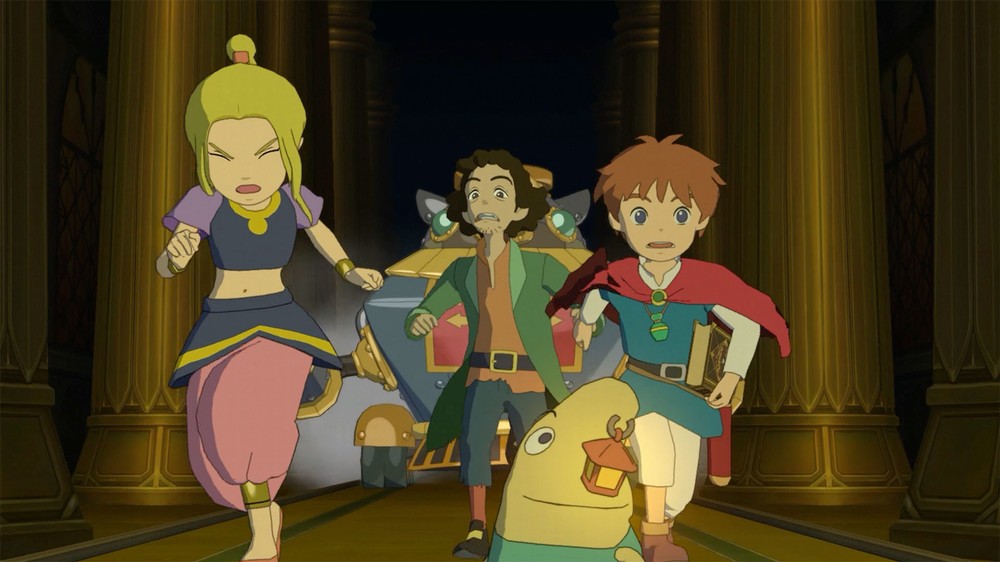 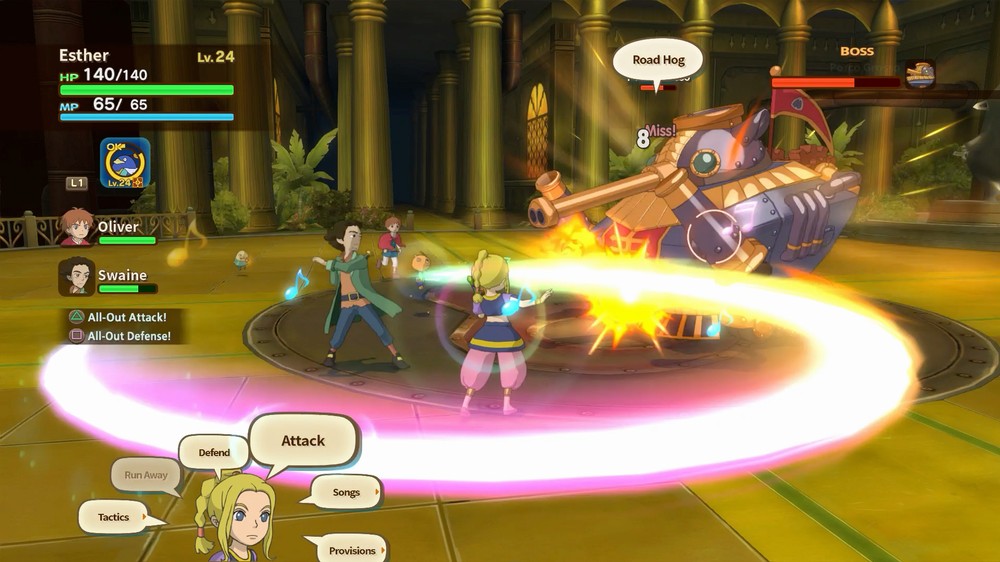 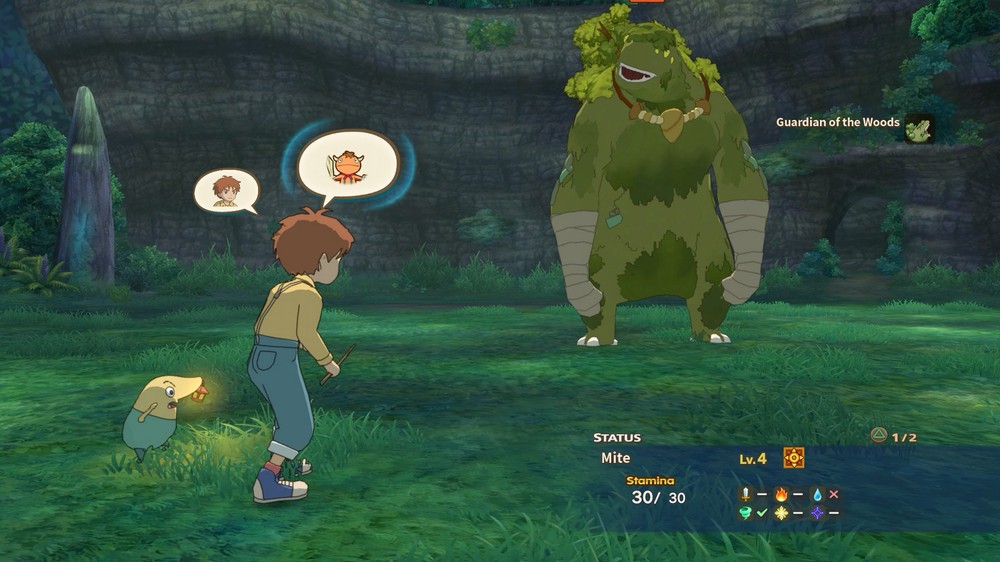