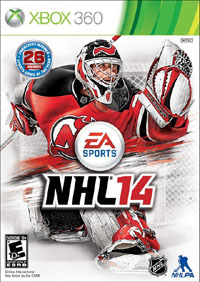 NHL14 is absolutely the best hockey game ever made...

After picking up the pieces of a strike shortened 2012-13 hockey season, the NHL finished in thrilling fashion with the Chicago Blackhawks regaining the Stanley Cup. Many of EA Sports’ NHL 13 simulations predicted that result and that really speaks to how far sports simulation games have come in recent years. NHL 13 was an editors choice last year and was a strong contender for sports game of the year, but such contests always come down to the little details and NHL 13 was missing a few features that make standout games like FIFA win nearly all the awards. NHL was so close to excellence last year. All the hockey fans in our office were really hopeful when the demo was release a month ago. So when the full game arrived this week we were really looking forward to some pugilistic arts and an occasional hockey game (and the wealth of features that comes with major pro sports games).

At first glance, NHL 14 looks nearly identical to last years edition. But you’ll quickly find the gameplay has some significant updates that make NHL 14 even better. However the same things we didn’t like about last year continue to plague this potentially excellent hockey game. The good news is EA Sports focused their time on little gameplay improvements that really push NHL 14 to some of the most realistic and fun sports gaming I’ve ever experienced. A universally welcome update is in the fighting engine (aka “enforcer” engine). Previous years have presented an odd fight presentation where upon dropping the gloves the ice basically cleared until your slugfest was over. It was almost like a mini-game. It was better than nothing, but really not close to reality. Many suspected the NHL had put some pressure on EA to tame down the fighting since the thuggery was getting so much press the past few years with concussions and such. But this year EA really shocked everyone with a completely revamped fight engine that will put a smile on even the most jaded hockey fan.

The enforcer engine sets things aright. EA borrowed the tech from their Fight Night boxing game and put a lot of fun back in NHL. In NHL 14 every player is live during fights. It uses a 3rd party view to give you more of a TV presentation. Not only can there be more than one fight going on at once, but even the goalies occasionally engage in the odd tussle. In previous years you had to initiate the fight. Now in NHL 14 fights happen in a variety of ways. If you slam somebody into the boards or run the goalie you will probably pay or it. When the fight is over, you control how your player celebrates. Watch as your player rests in the sin bin – players retain cuts and bruises from fights that show up on the amazing rendered player faces. 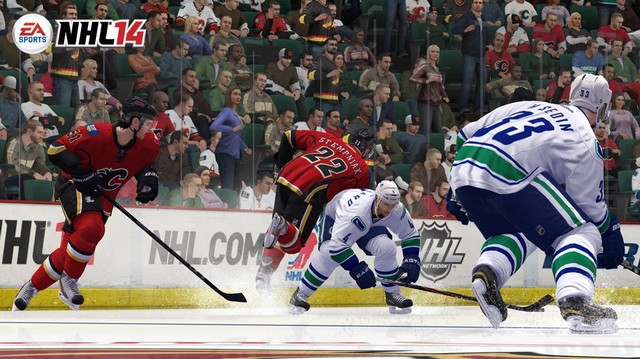 The popular Be A Pro mode has evolved to the Live the Life mode. In many ways this has been attempted before in other games with varying success. Basically EA tries to spice things up with off-the-ice factors but don’t expect a Grand Theft Auto experience. The ‘immersion’ is limited to answering a few questions from the press after each game. Your pick from the multiple choice answers will determine how your teammates, management, fans and family feel toward you. It effects the game in subtle ways like players choosing to pass the puck to someone else or you being moved to a different line. The core of Be A Pro mode is still there and it’s still rewarding but the new additions don’t add much.

NHL 14 also borrowed the collision engine from FIFA. It makes the players move more realistically and collisions do seem to have more of the correct action/reaction we’ve wanted for years. There are quite a few other things the development team should have borrowed from FIFA though. The creation mode in NHL 14 doesn’t look like it’s been touched at all. They still have the same old logos and limited names. A Call of Duty style logo creation section would have been a nice addition. While the female players from NHL 13 (Hayley Wickenheiser and Angela Ruggiero) are gone, we now have former USA women’s team captain Cammi Granato. I applaud EA for at least making an effort to put women in the game, but the complete lack of women’s national teams, college or club teams is a joke. At least give the users the tools to make teams of their own and upload them for other fans to play.

Hockey Ultimate Team (HUT) returns this year with a few needed improvements. It’s basically the hockey version of FIFA’s Ultimate Team and a highly addictive one. It’s a fantasy team using a trading card motif for player pool and resource management. You get a pack of cards to start out. Each pack includes some players and various resources (like training, contract extensions, and healing) to improve your players or team. Packs are purchased using EA Pucks which are earned during gameplay. You have to set your roster and lines for each game looking at the player chemistry (which is effected by country, team affiliation etc.). Packs come in several values with Bronze, Silver, Gold, Premium Gold, Premium Gold Jumbo, and occasionally you might get freebie packs. 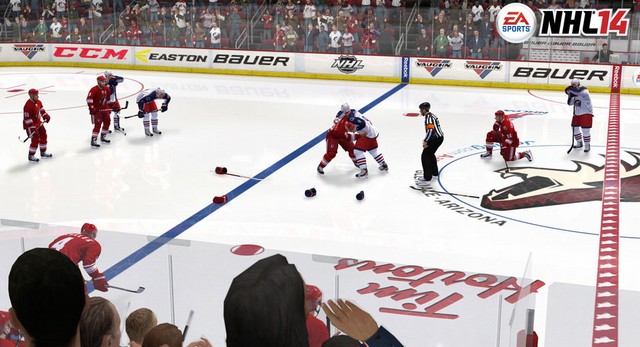 Once you get a couple packs purchased, you organize your team. Your player chemistry is very important. Everything from nationality to team affiliation is a factor. Set up your lines so your players have good chemistry and the passes will be better and players generally will perform better as a unit. You can also allow the CPU to arrange your team if you would rather just play. You then start in an 8,000 seat minor league style arena. Your games are pretty sparsely attended. That will change as your team picks up some wins. You can play single games or tournaments locally or online. The higher the skill level, the more EA Pucks you earn for trading.

This is where EA’s money making machine kicks it into high gear. EA sells a package called “Season Ticket”. Basically for $25 you get a year of benefits for several EA Sports games including NHL, FIFA, NCAA, Tiger Woods and Madden. You get to download and play the full game 3 days before it’s released to the general public, then you buy the game on release day and get 24 Gold Premium Packs (1 a week) plus 20% off any future NHL 14 DLC’s and card packs. That’s over $30 worth of value just for NHL. Plus you get the same benefits for FIFA 14, NCAA 14 , Madden 25, and Tiger Woods. All for $25. It’s a great deal for anyone else who is addicted to Ultimate Team – especially if you were going to spend money on packs anyway. However unlike FIFA, you cannot sell the cards you obtained with the Season Ticket in NHL 14.

Anyway, the biggest improvement in HUT is the addition of Online Seasons where you play a short season and your results will either get you promoted up a league, stay in the same league or relegated to a lower league. This again is a carry-over from FIFA (many countries have promotion/relegation in their soccer leagues). It’s a great way to challenge players to keep their skill levels up and prevent wasting time on blowout games where the other player isn’t on your level. 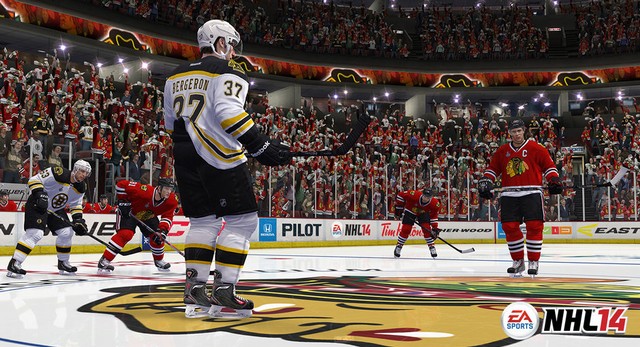 A completely unnecessary colossal waste of time addition to NHL 14 is the NHL 94 Anniversary mode. When it was announced, the anniversary mode was expected to basically give us the original game ROM as a side game. Instead we get the blue ice and generally no rules, but with current players. NHL 3 on 3 was better than this and it was overpriced featureless drivel. If EA are going to go to all the effort, why not give players what we want? Much like NFL’s Blitz, Midway’s NHL Hitz was completely unrealistic over the top arcade action and we want it back.

NHL Moments Live presents a sort of ‘remember this’ series of moments where you can relive specific events in games over the past 2 years. Sort of. But not really. As it was with NHL 13, this year you still have to play with the current year team rosters. So it’s really not recreating anything. It’s more of a ‘what if the current teams played this game’ scenario. Nice try. The moments I would want to see are the classic moments of Gretkzy, Howe, Orr and countless others. But while some interesting historical moments were included last year, we have none of that this year unless EA intends to bring a DLC.

Also back is the Winter Classic mode where the ice rink was put up in outdoor baseball or football stadiums. This popular event was canceled last season due to the lockout but the 2011 Winter Classic in Pittsburgh and 2012 Winter Classic in Philadelphia are included. It’s not clear why the 2013-14 outdoor games are not included in NHL 14. The NHL knows how to make a buck and expanded the outdoor games to 5 this season including 2 in Yankee Stadium and single games at Dodger Stadium, Soldier Field, and BC Place. I suppose those would require a license and that’s more money than EA is willing to spend. 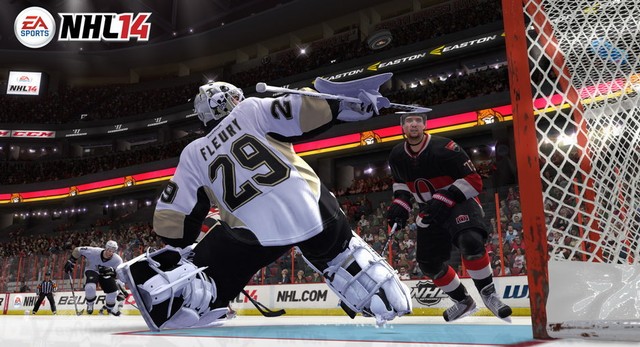 A bunch of little things have been tweaked in NHL 14 to make it a better, more realistic hockey game. The Be A GM and GM Connected modes have been upgraded to bring even more realism to the game. The graphics and interface are again amazing right down to the scars on player faces. Many of the teams have introduction graphics that are specific to their team such as the San Jose Sharks have the players skate out of the mouth of a big inflatable shark.

The duo of Gary Thorne and Bill Clement are again in the broadcast booth for commentary. Many people think they need to exit in favor of other announcers for next season. But EA has a large library of commentary and player name audio from this pair and that’s a big advantage if they can continue to recycle much of the dialog. There are new sometimes funny/sometimes annoying clips from these guys that make NHL 14 much more than a yearly refresh. Thorne and Clement provide a lot of excitement we don’t get from many announcers on TV.

The iOS NHL 14 Companion app has also been updated slightly. It seems much more stable and again includes GM Connected and Hockey Ultimate Team modes. This will allow you to make some roster moves while on the go. It’s a nice addition and I look forward to more integration next season. 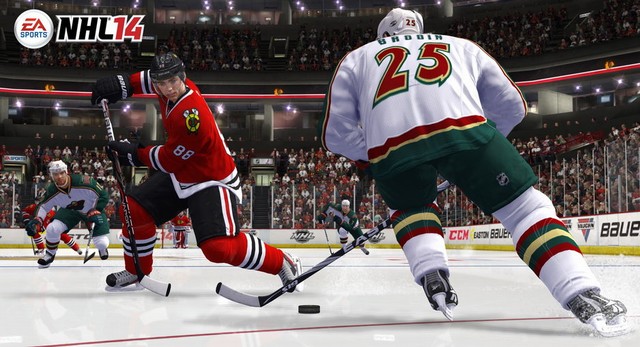 Ultimately when the biggest improvement is the fight engine in NHL 14, it doesn’t bode well for the decision making process at EA Sports. In addition to borrowing the collision tech from FIFA, they might as well have borrowed the Creation Centre app as well. Creation Centre would have allowed the users to make any of the teams from nearly 100 years of NHL, Olympics, Canada Cup, college and other teams. They already have female players in the game but no female teams. People just need the tools to create. It’s those tools that keep players interested in the game and keep it fresh. With a game engine this advanced, it would be amazing to see how the Blackhawks would do against Gretzky’s Oiler’s… but not this year.

It is frustrating to see how good NHL 14 is, yet not quite achieve the potential that is within reach. Make no mistake, NHL14 is absolutely the best hockey game ever made, and it completely deserves a 5 star rating. But just a little more effort would make NHL 14 excellent and a viable choice for sports game of the year. Until then, FIFA will reign. 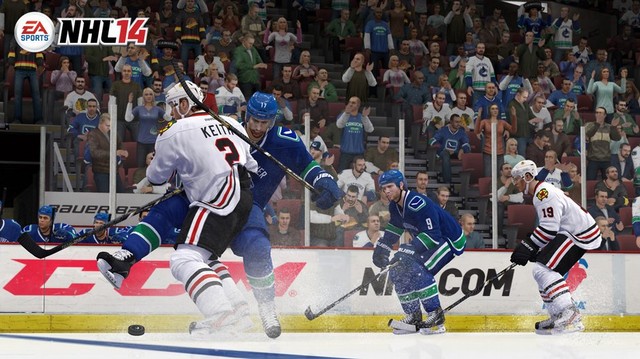 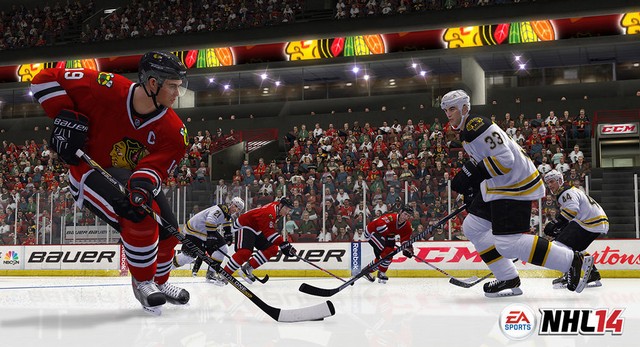 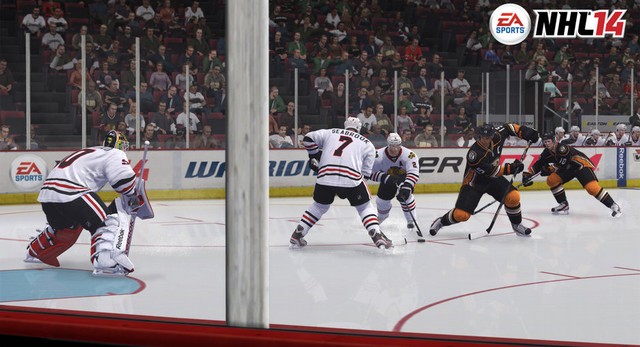 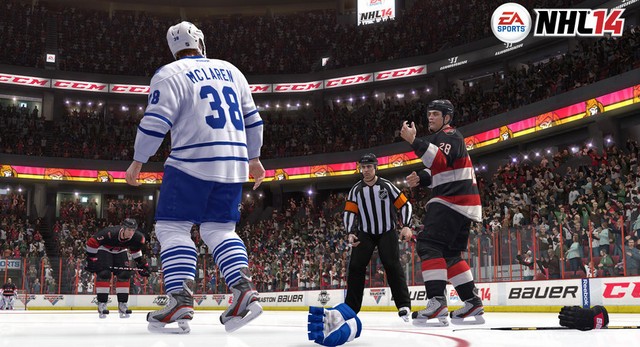 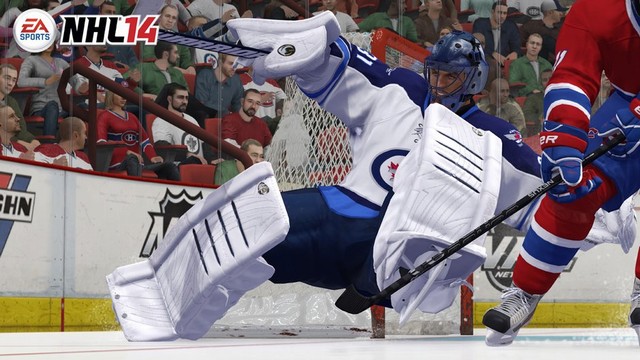 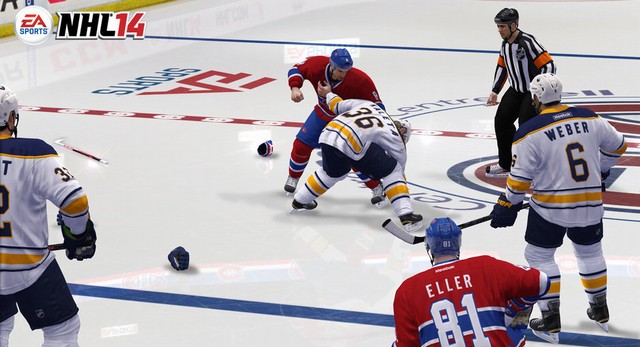 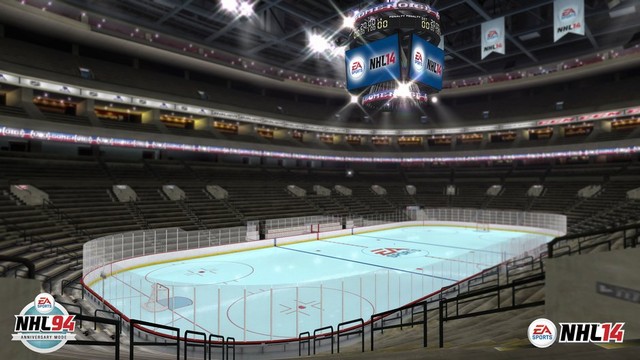 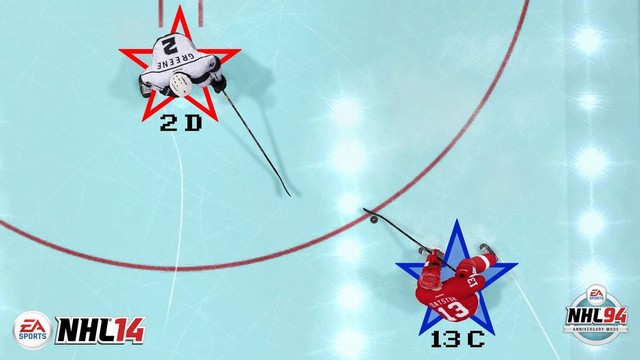 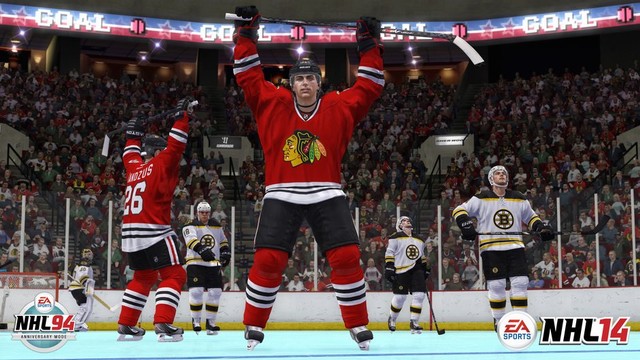 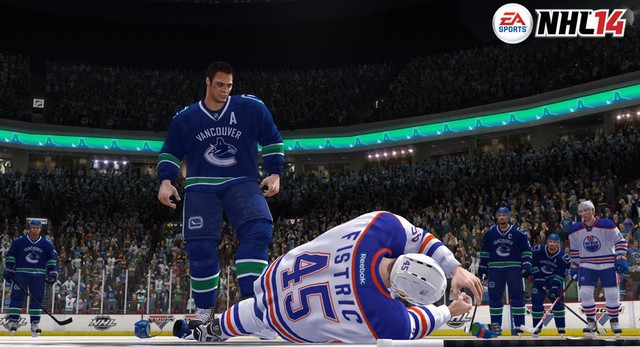 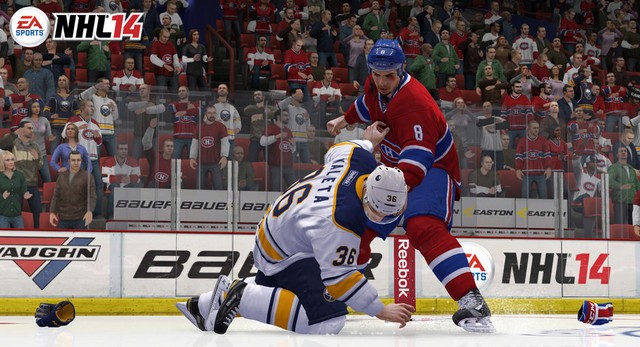 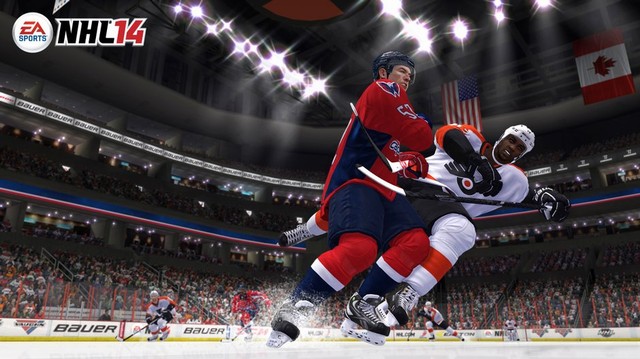 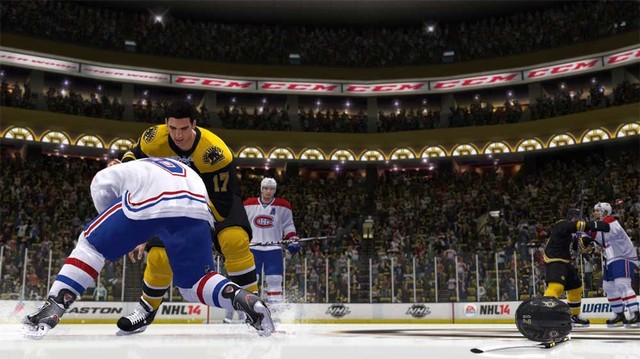 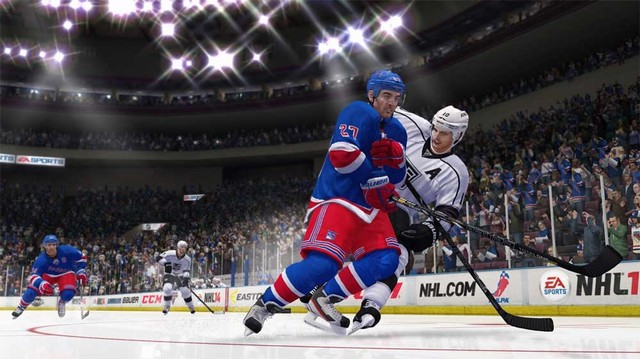 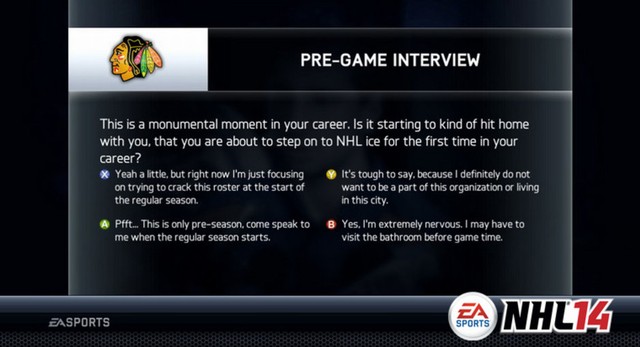 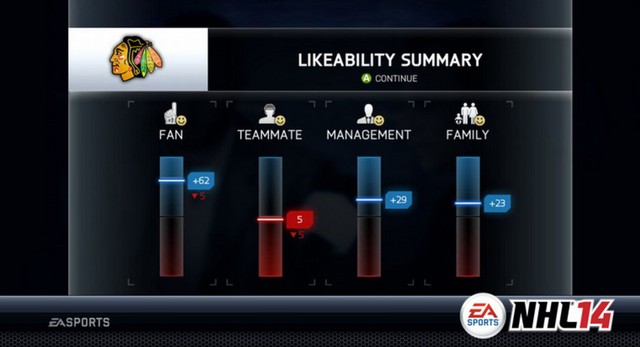 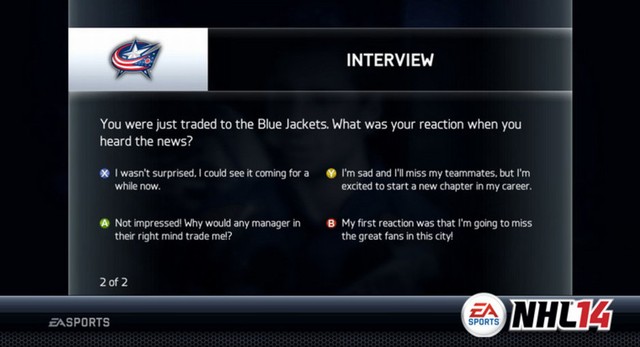 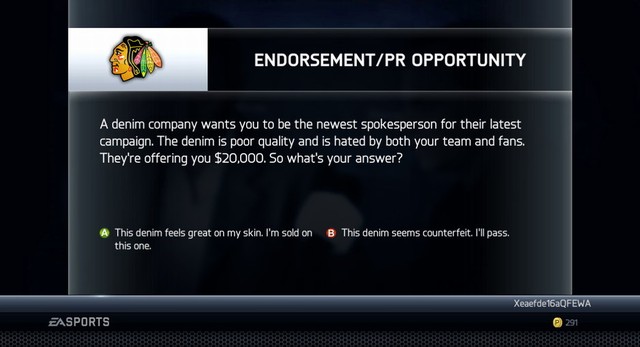 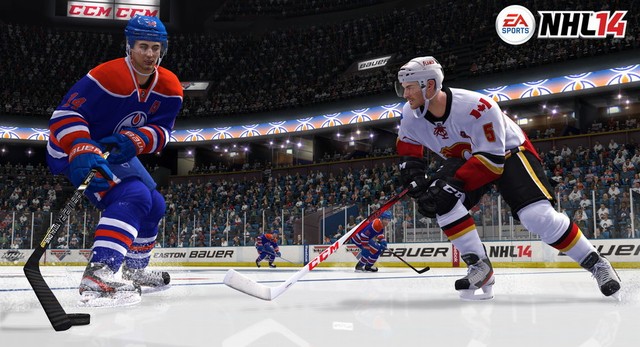