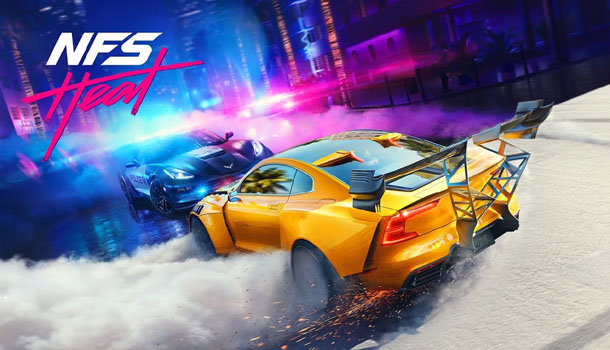 A return to street racing greatness combined with a world's wealth of collectibles and activites.

Welcome to Palm City, a unique hybrid of West Coast meets East Coast where the bustling city and surrounding mountains of Los Angeles are enhanced with the design aesthetics of Miami, the neon strip of South Beach, and even a dash of Cape Canaveral. This diverse and impressively large landscape is home to Need for Speed Heat; the latest installment in a franchise of games I’ve been playing since the late 80’s when the original game shipped on a single 5” floppy. The series has been hit and miss lately with EA taking seemingly random stabs at trying to evolve the game into something different, but thankfully, Heat returns the series to greatness by returning to its roots.

Need for Speed Heat loses all the baggage from the previous few titles like modifying your car with trading cards and the blatant monetization tactics of loot boxes and such. Heat is a standalone game right out of the “box”, playable and enjoyable in its entirety without a single extra dollar coming out of your wallet. It’s blends multiple genres of racing as well as embracing the underground culture of the street racing lifestyle while combining plenty of fun and challenging racing action with a wealth of collectibles and car-related activities. 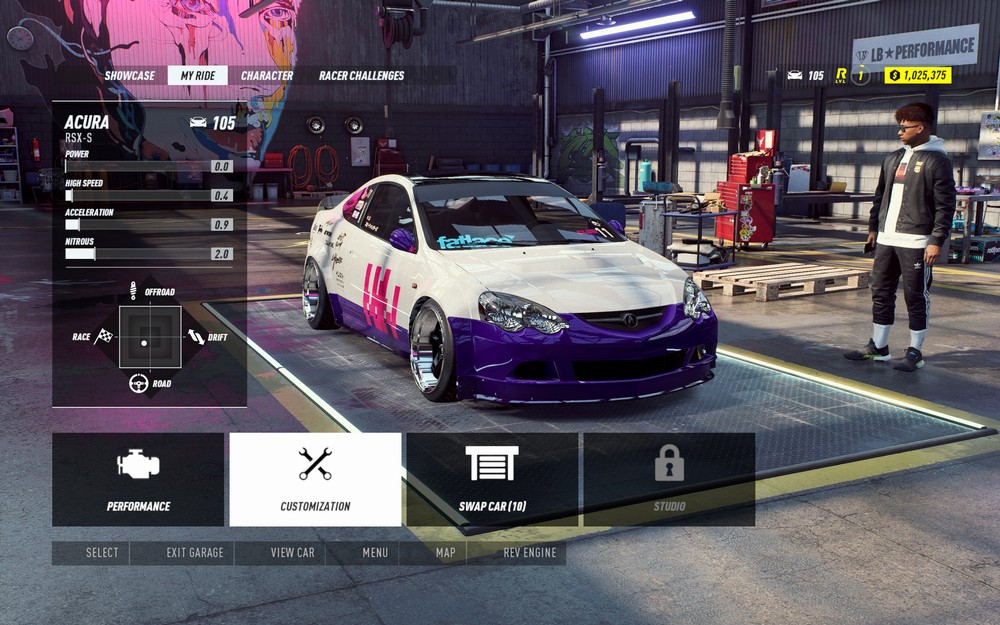 The game kicks off with a spectacular opening movie that setups the overall conflict between the militant police force and those rebel street racers. The police chief has declared war on street racing, which makes this the perfect opportunity to introduce some new blood into the family. Cue the character creation and initial car selection segment we all know and love. Choose from 12 racial/gender stereotypes then customize them with surprisingly amounts of detail and clothing options. The possibilities only get larger the further you go into the game and earn money to buy more stuff. Unlike most games where you seldom see your avatar, Heat prominently features your character in post-race clips as well as numerous cutscenes, so I ended up caring more about my personal style in this game than previous games.

Next, you will need to choose from one of the four cars offered to you that mirror the four styles of racing found in the game; Racing, Off-road, Drift, and Road. Again, not to worry as most cars can be tweaked and tuned to cover multiple racing styles, and your race winnings will add up quickly, which means a new car is as easy as a short trip to the nearby dealership. The Garage is your main base where you can maintain your stable of vehicles. The upgrade system is impressive with a host of cosmetic and performance parts that will quickly drain your bank account. One feature I found totally unique is the ability to upgrade your engine, which means you could conceivably play the entire game with the free car you get at the beginning unlike most racing games that make you purchase new, higher class vehicles to stay competitive. 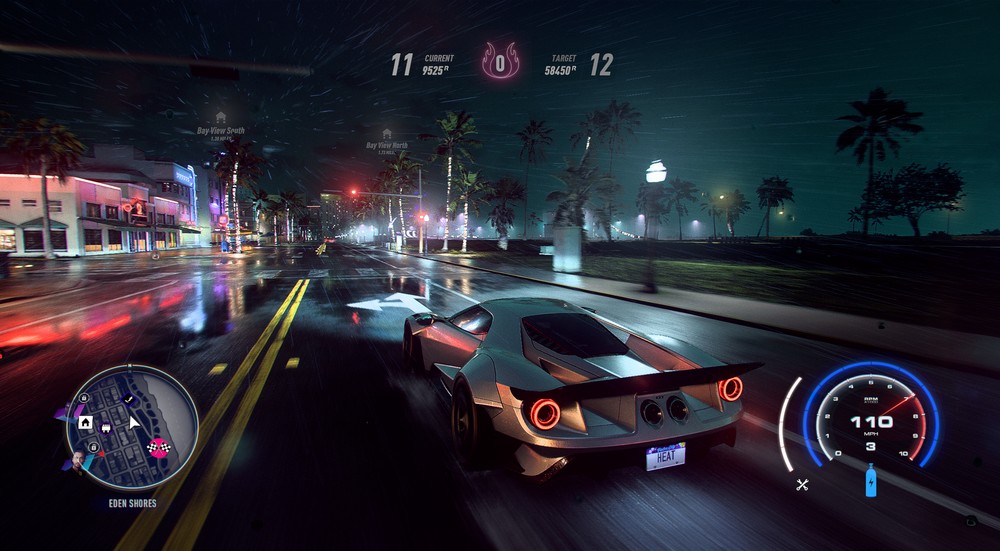 Need for Speed Heat is divided into two distinct games within the game. Your progression within the street racer community is based on earning Reputation points while your ability to compete in that community is based on earning enough money to maintain your competitive edge on the street and your high sense of fashion in the driver’s seat. Just kidding…nobody cares how you look. The game creates this unique duality by having you race for cash during the day and reputation at night.   Rep unlocks the parts you’ll need to buy with cash. Rep is earned by completing street races as well as messing with the cops, and the higher your “heat” level the faster your rep adds up, but the higher the heat the more cops get involved and the harder it is to escape. If you get busted you’ll lose everything you’ve built up that night, so the longer you risk staying out the more you have to lose. You can usually lose the cops the first two chases, but after that they bring out bigger vehicles and start laying down spike strips.

Daytime races are organized events, usually on closed circuits setup around town or out in the surrounding rural and industrial areas. Street races take place at night, often in the same surrounding, but now you’ll be racing through traffic and with the added threat of the police that will keep chasing you even after you cross the finish line. Also helping to distinguish day from night are unique sets of challenges specific to the time of day. Once you check all these off, new challenges will appear. There is no real-time day/night cycle; instead you are allowed to pick the time of day before leaving the garage or toggle it from the pause screen while driving about. It’s a very cool effect to change the time of day while driving, as your car (and the entire screen) will spin around like an advancing clock. You can even cycle the map between night and day to see what events are waiting in each. 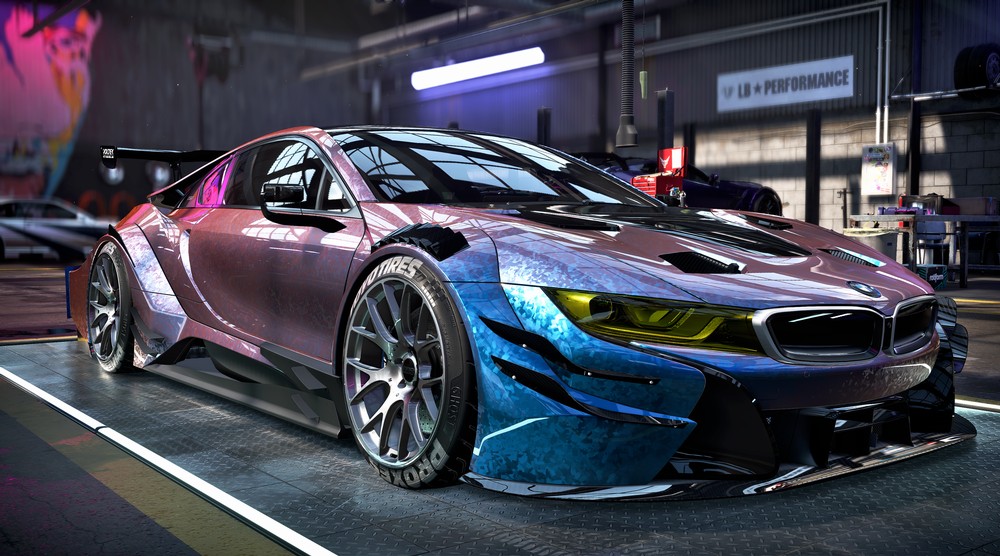 Given the sheer amount of stuff to do in Need for Speed Heat, actual racing almost takes a backseat. There are billboards to smash, pink flamingos to destroy, graffiti to scan (which turns into wrap designs for your car), speed traps, drift zones, jump distance challenges, plus gas stations, and safe houses to unlock. Those final two are most important as safe houses not only allow you to fast-travel around the map; they also provide an escape from the cops at night. Gas stations are equally as important, as they provide drive-thru repair to fix any car damage. This is unlimited during the day but you only get three repairs at night.

Peppered throughout all the career racing and the massive assortment of collectibles and activities are key story missions that will advance the narrative. These, like most races, are gated by the power rating of your car which, if you are keeping up with your upgrades, should never be an issue. The progression of difficulty is nicely balanced and if I ever did get to a point where I couldn’t proceed I certainly had enough cash winnings to upgrade or buy a new car to meet those new demands. The same goes for racing modes. I don’t particularly enjoy drifting or drift challenges, so when it came time where I was actually forced to complete some I had to go buy a car with a good drift rating. 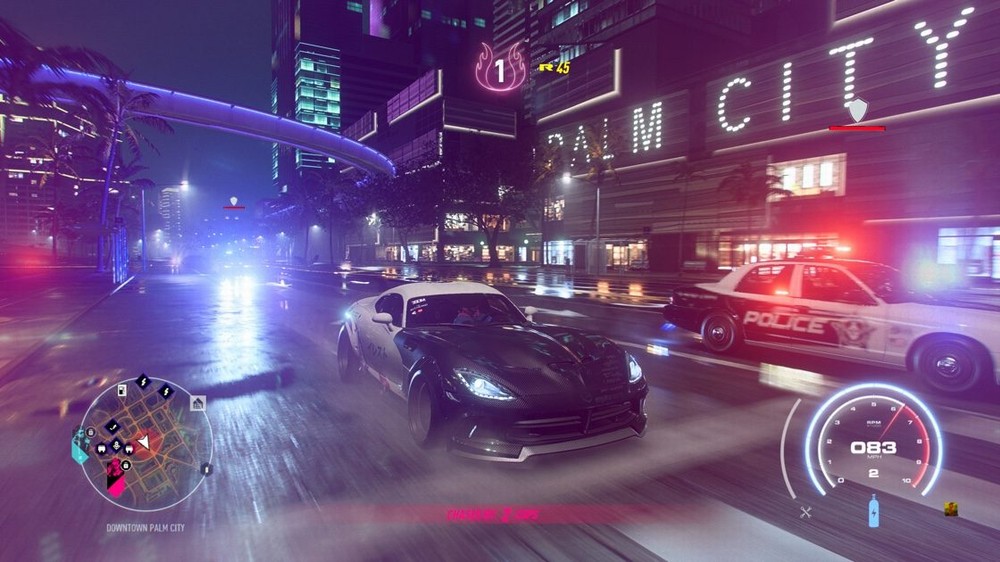 Technically, Need for Speed Heat is a stunner on a high-end PC. With all options set to their highest settings I wasn’t quite able to get the game to run at 4K/60fps on my 2080ti card. If I lowered some detail options things smoothed out, but I instead chose to run at 256×1440, which ran flawlessly at 60fps with every setting cranked to the max. There is no RTX support but you’d think there was with the pristine level of lighting and reflections, and the HDR lighting made me want to install a sun visor on my TV. The nighttime racing, especially, showcases some of the best lighting and reflections you’ll see in a game this year. There is real-time weather during the day and night and the rain effects are incredible, both how it streaks and reflects in your headlights as well as beads up on your display, and those moments just after it rains, as the sun burns through the clouds and reflects off the puddles on the road are breathtaking.

The environment is massive and exquisitely detailed, creating a landscape I was continuously thrilled to be exploring. The seamless transitions from city to curvy mountain road to rolling hills, industrial areas, a massive marina full of yachts, and even the game’s own version of NASA kept me exploring for hours, often to the point where I would forget where I was supposed to be going for my next race. The vehicle modes are equally as perfect, both in their core design and when combined with a host of body part modifications, and don’t even get me started on the paint and wrap section where you can design your own custom art for your cars or visit the community library where thousands of designs await. You can spend so much time tweaking your cars they even have a companion app that will sync with the game and allow you to modify your cars on your mobile device. 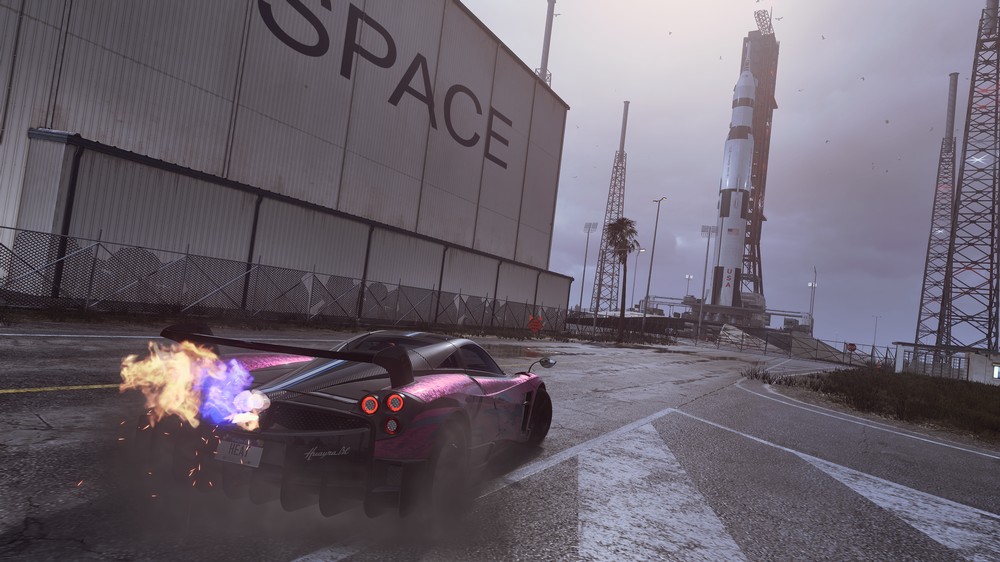 The sound package is fantastic with a great selection of music you can cycle through using your car radio. The engine noises are great as are all the rest of the sounds of racing, skidding, crashing, and the great banter between the cops while chasing you. My only nitpick with the audio is that based on the sequence of the game you are in the same people keep calling you on your cell and repeating the same dialogue over and over again until you advance to the next part of the story.

You can probably race through the core story in 6-8 hours but if you truly want to complete Need for Speed Heat then prepare to spend 20+ hours checking off every last collectible on the map, and if you want to earn 3-stars on all the speed traps, drift zones, and race challenges maybe set aside 30+ hours. There is a world’s worth of stuff to do in this massive racing adventure. There is even multiplayer support where you can create or join a crew of up to 32 other racers and tackle this massive world as a group. 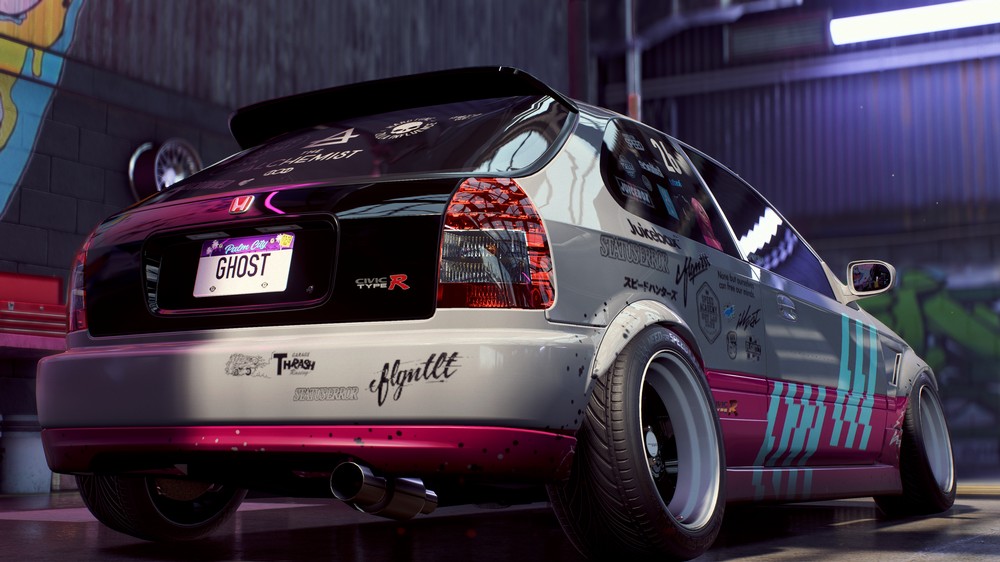 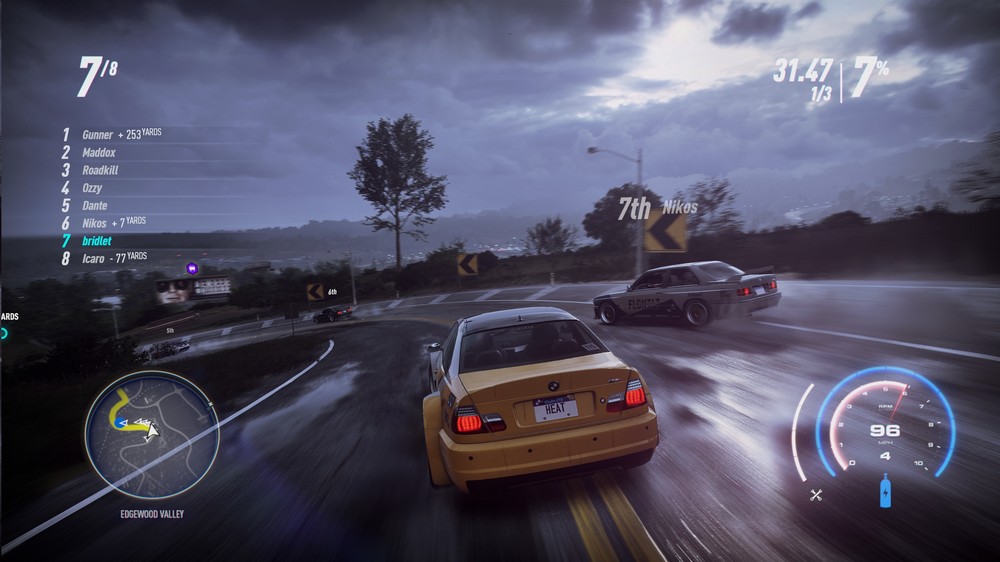 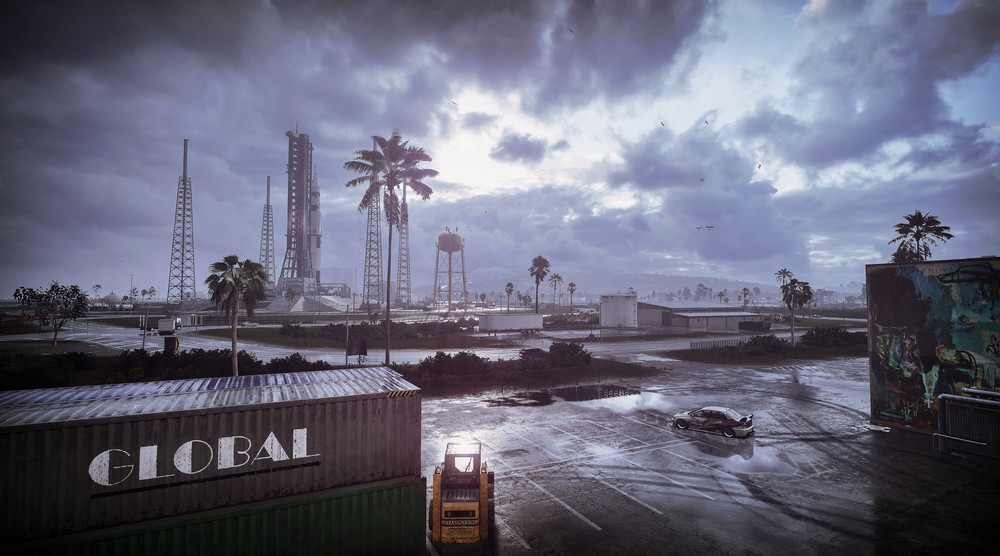 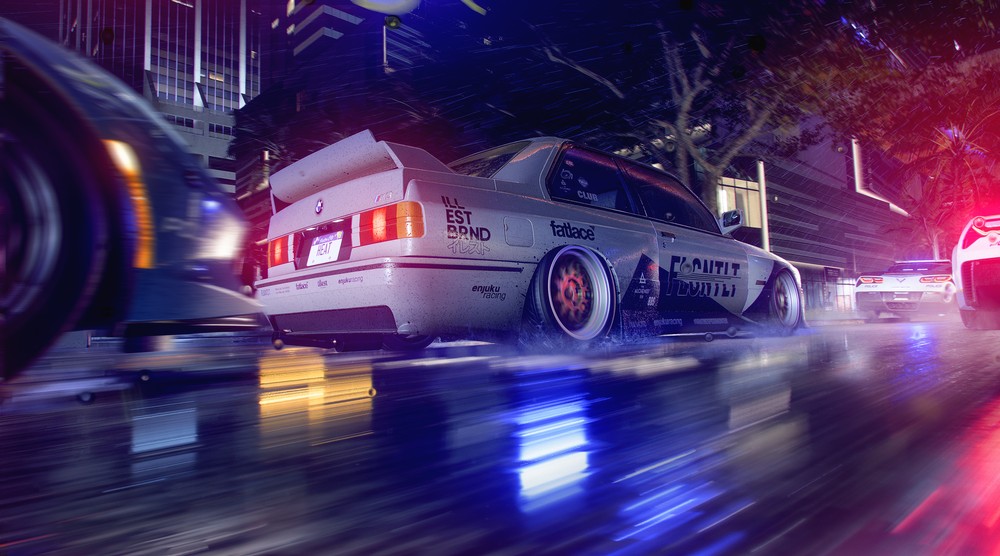 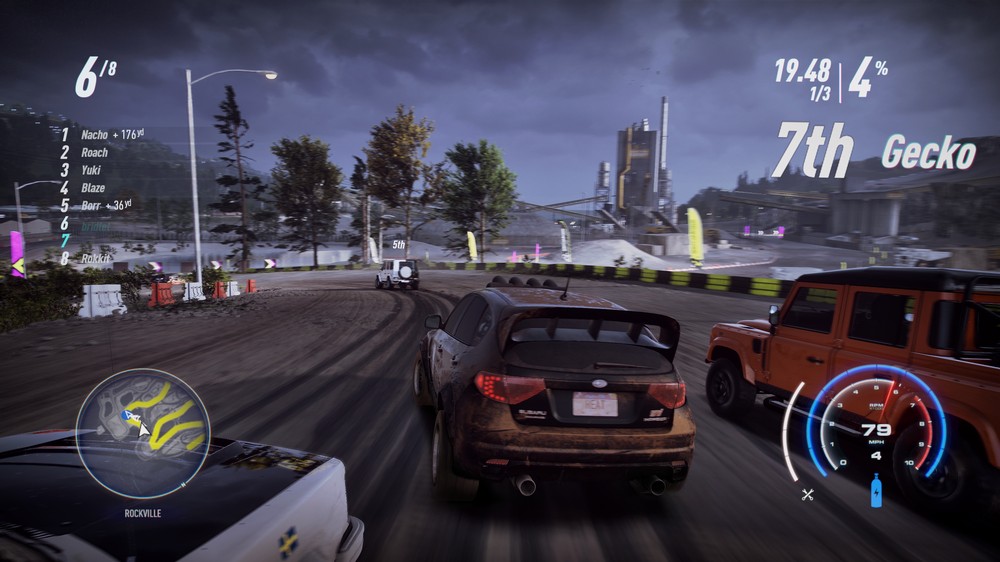 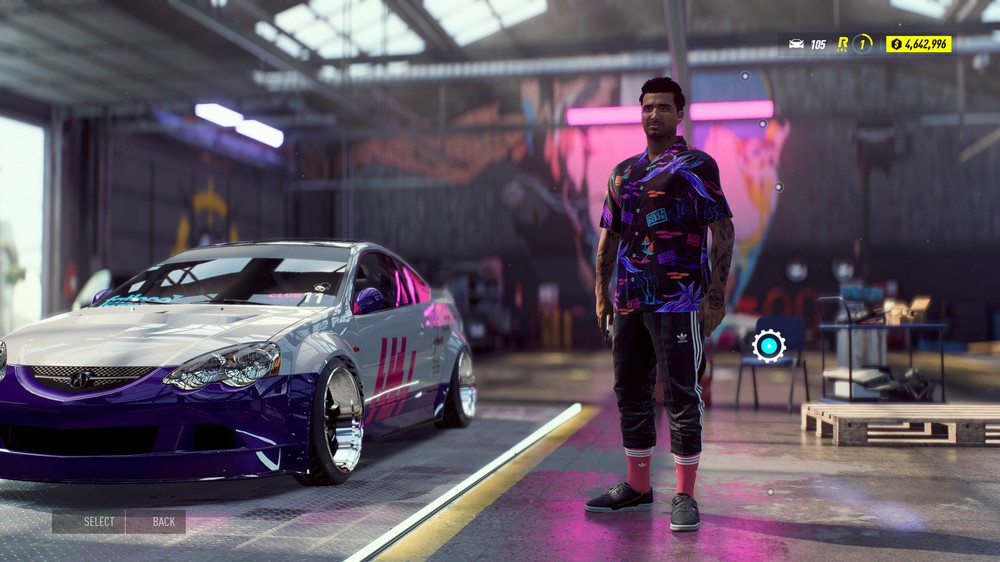 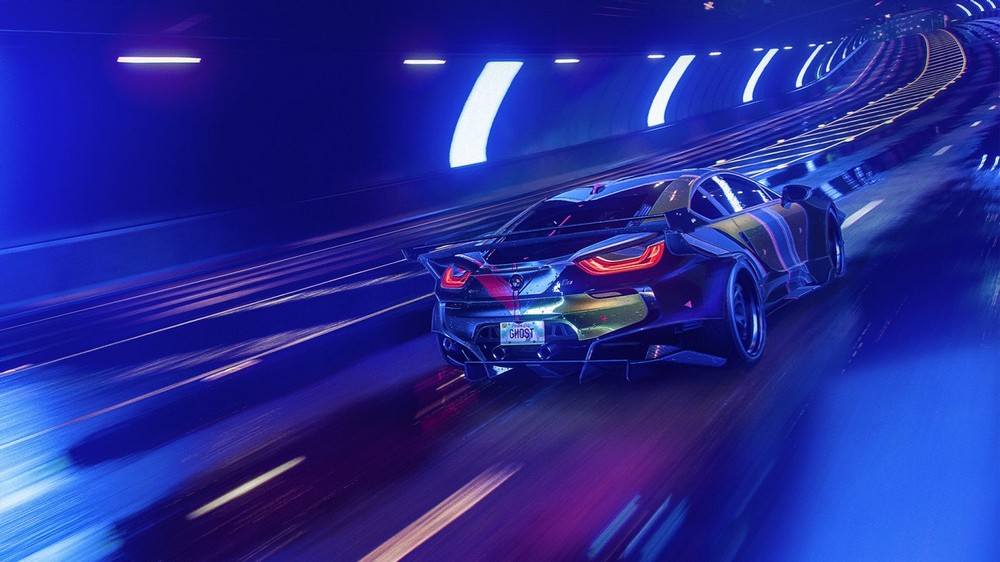