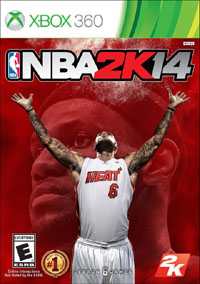 Let me start this review by saying I played NBA 2K13 a lot…a LOT. I broke it out when friends came over for game night, and I spent countless hours immersed in the career simulation. It was truly a landmark achievement in basketball video gaming, and I was on the edge of my seat with anticipation as I fired up NBA 2K14 to see what they could have possibly added to the mix. Sadly…not much.

With the exception of a few minor additions, NBA 2K14 is last year’s game in a new box, which isn’t necessarily a bad thing if you don’t already own NBA 2K13. Everything from the player setup to the various game modes are meticulously reproduced, and as I began the process of creating my sneaker-squeaking avatar, playing the showcase game, going through the lengthy unskippable draft, and playing the first few months of my new career everything seemed identical to last year from gameplay to Sprint sponsorship, to the post-game interviews.

Like last year, you’ll want to improve your character between games by taking part in various skill drills and training. Skill challenges earn you cash while training will actually boost various stats based on the lessons you learn. You also need to maintain a positive image with both your fans and your own team, which can improve chemistry and boost performance on the court. There are stats for these and also a virtual twitter feed with amusing comments you can follow or ignore. 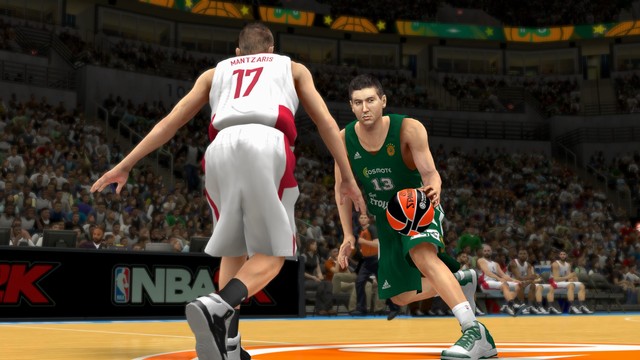 Coins are back and they are just as slow to earn as ever, especially if your team chemistry sinks to a D or lower. You can actually come out of a game with no new cash. Your overall coins for each game vary based on performance, team chemistry, dynamic challenges, and your ability to make the highlight reel or earn the MVP award and are added to your normal salary. You’ll need to watch your money for the first year or so, avoiding luxuries in favor of new skills that will improve your game and future earning potential. Later on when endorsement deals get made or you renegotiate your contract money becomes less of an issue.

NBA 2K14 features the same great presentation found in last year’s game complete with multiple camera angles of the gorgeous stadiums and detailed player models as well as some of the best non-stop commentary you’ll find in a sports game. The play-by-play is spot on and they even make these uncanny references to your past games and post-game interview comments. NBA 2K14 doesn’t miss a single detail when it comes to immersing you in the NBA lifestyle. Stadium graphics are loaded with details like official mascots, cheerleaders, sponsor banners, and hundreds of individually animated fans in the stands. There are dynamic replays and cutaways for special shots, and they even have TV-style commercials for upcoming games on the schedule. From the moment you start a game to the moment you return to the locker room you are never once taken out of the experience of being a real NBA baller at a real NBA game. 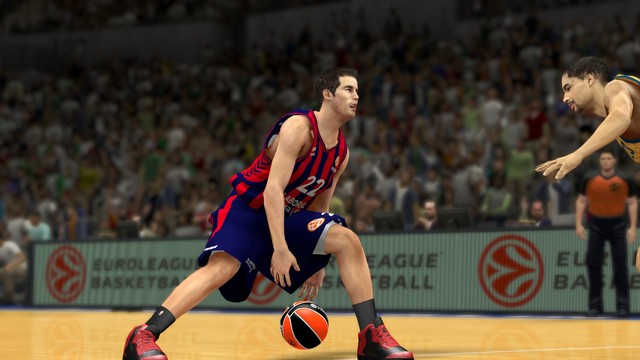 Controls are pretty much the same as last year with the exception of the right analog shot/pass stick that no longer requires a trigger. You either flick the stick to pass or hold to shoot. The trigger modifier now invokes a slick new freestyle passing where you squeeze and push the right stick toward the receiving player. The seamless animation looks cool when it works, but your success isn’t as guaranteed as the old method, so start pumping up those passing stats.

NBA 2K14 also offers limited Kinect support for voice commands, and these add a lot to the immersion and the fluidity of gameplay, allowing you to call plays and sub players without fumbling through menus; that’s assuming the Kinect can hear you over the regular sounds of the game. The audio detection icon was continuously appearing in the top corner whenever the commentators were talking.

If you ever get tired or need a break from your NBA career there is a fantastic multiplayer experience waiting for you whether you want to play local 4-player co-op, online 5-player co-op, or go all out in 10-player online where every player is a real person. Just like last year, the online play is surprisingly smooth and lag-free, even in 10-player games. 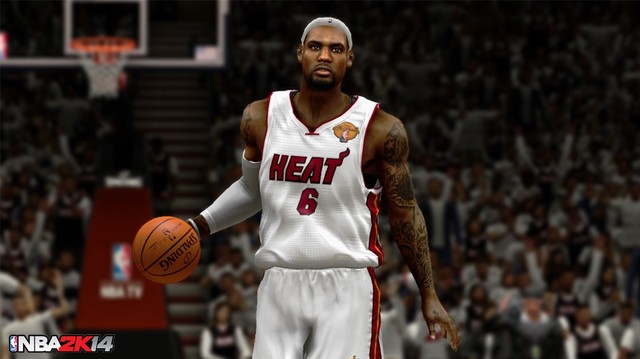 So just what is new about NBA 2K14? Well, if you are a fan of LeBron James then a lot, otherwise you might be better off just going out and picking up a copy of 2K13 for a much reduced priced – you know they are all getting traded in right now. Whether you love, hate, or care less about the man, James is the signature player in 2K14 and you can explore him further in the LeBron: Path to Greatness mode. Personally, I have no opinion or prejudice one way or the other, but I did enjoy this virtual “what if” scenario that follows LeBron into the future as he tries to beat Jordan’s record of six NBA championships. You get to choose whether he attempts this in Miami or embark on a new career path that will lead him back home to Cleveland. I was impressed with the amount of work and exclusive content that went into this mode with special stories and specific commentary. The content actually surpasses the Jordan Challenge from NBA 2K11, but I couldn’t help but feel like I was being subliminally brainwashed to love the man.

Other than the aforementioned control tweaks and the addition of the LeBron James mode not much has changed. I did notice the defensive game was slightly tweaked, or maybe I’m just finally getting better, but it seemed a lot easier to block and rebound the ball this year. Other than that, expect the same flashy splash screens, horrible menu system, the same post-game interview questions and canned responses, and pretty much the same exact experience you had with NBA 2K13. And yes, you had better love hip-hop or the music in this game will drive you nuts. Even without Jay-Z’s name splashed on the cover you can still feel his influence.

For LeBron James fans, picking up this game is a no-brainer. It’s just a shame that Visual Concepts didn’t put as much work into the rest of the game; not that it need much improvement, but at least mix it up a bit and make us think we are getting something new and improved. 2K Sports has had the luxury of being the only NBA game out there, but EA Sports might force them to up their game in 2015. For now, NBA 2K14 is a competent basketball game, career simulation, and a great PR piece for LeBron James and still the best game in town. 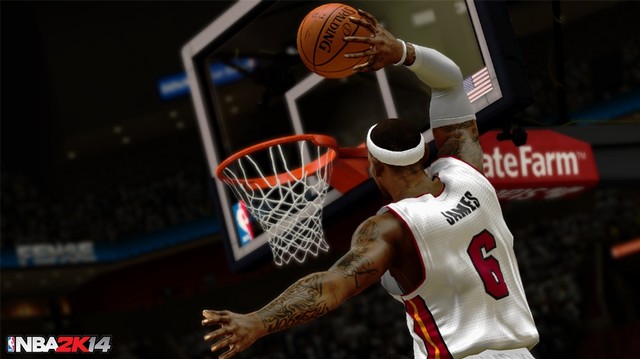 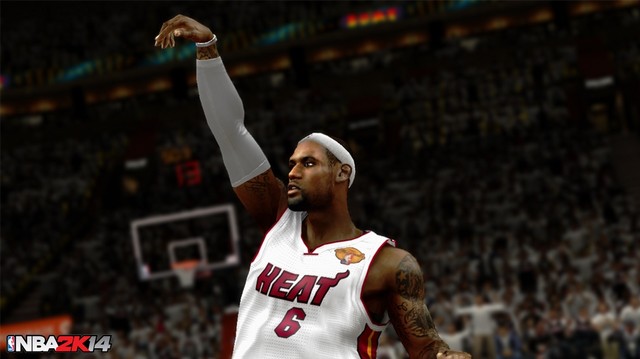 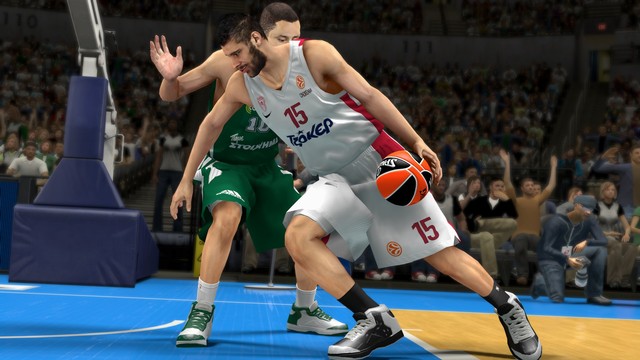 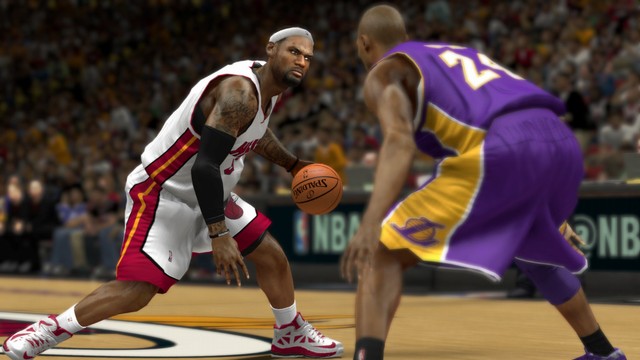 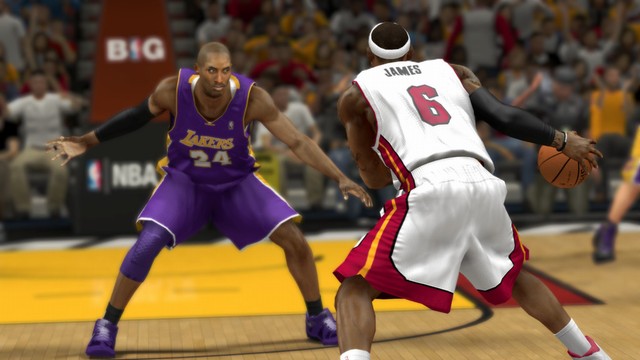 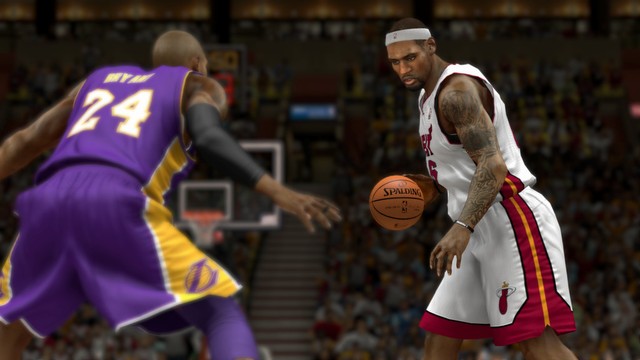 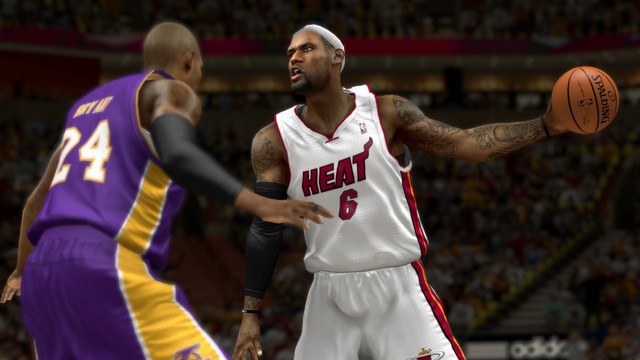