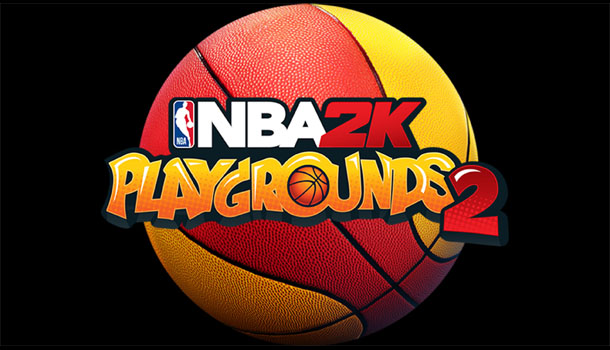 An unabashed homage to Midway’s classic Jam series that will cost you plenty before and after you buy it.

While most sports gamers are looking for increasing realism from their yearly sporting simulation update, there remains a certain contingency of gamers that is looking for nothing more than an old-school arcade-style sports fix.  This is especially true in the realm of videogame basketball, where players long for the over-the-top rim-rocking pick up and play nostalgia of the arcade classic NBA Jam.

It is for this very reason that the folks at 2KSports picked up the publishing of the follow-up to Saber Interactive’s NBA Jam-inspired NBA Playgrounds, rebranded it as NBA 2K Playgrounds 2, and released it alongside their own incredibly deep simulation NBA 2K19.  An absolutely genius move, cornering the NBA license.

Like its predecessor, NBA 2K Playgrounds 2 is an unabashed homage to Midway’s classic Jam series.  The two-on-two gameplay featuring a stable of bobble-headed NBA superstars (new and old) performing insane, high-flying, fire-spewing, rim-shattering alley-oop slam-dunking action delivers little that we haven’t seen a dozen times already, but it does so in a way that still makes it seem fresh and exciting.  NBA 2K Playgrounds 2 like meeting up at the bar with an old college buddy – there’s no need for small talk or catching up, get a round of beers on order and commence to partying like it’s 1999 all over again. 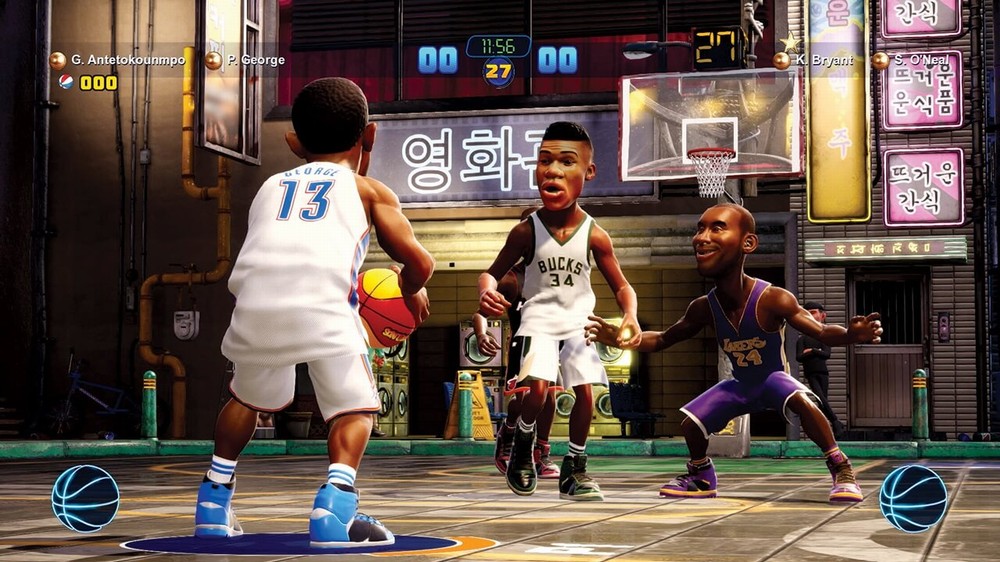 The overall gameplay is solid, although there is always a certain degree of abruptness with the animations that interferes with the overall flow of the action.  Granted, there is a noticeable improvement in fluidity over last year’s release, but compared to the likes of EA Sports’ classic NBA Street franchise from nearly two decades ago, Playgrounds 2 seems a bit herky-jerky.

Any issue with the animation fluidity is a minor annoyance that can easily be overlooked given the overall quality of the presentation, which has been amped up significantly by the inclusion of 2K Sports. Playgrounds 2 may be a budget-based title, but it has all the audiovisual splendor of its full-priced big brother, NBA 2K19. Everything from the menu screens to the in-game action pop with color and detailed visuals, and the in-game sound effects and witty commentary from YouTuber CashNasty deliver an exciting and authentic experience.

Playgrounds 2 is definitely a pick-up-and-play arcade style game, but there is a great deal of skill required to master the gameplay.  As with all arcade titles, timing is key to success: letting go of the shot within the narrow green area of the shot meter, shoving an opponent at the perfect moment to send the ball loose, and timing that perfect two-player ally-oop combo. Players have the option of single player, with a friend head-to-head or cooperative teams, and of course, online.  Games are short – lasting only 3 minutes – which makes for quick fast fun, and rapid completion of seasons and/or tournaments. 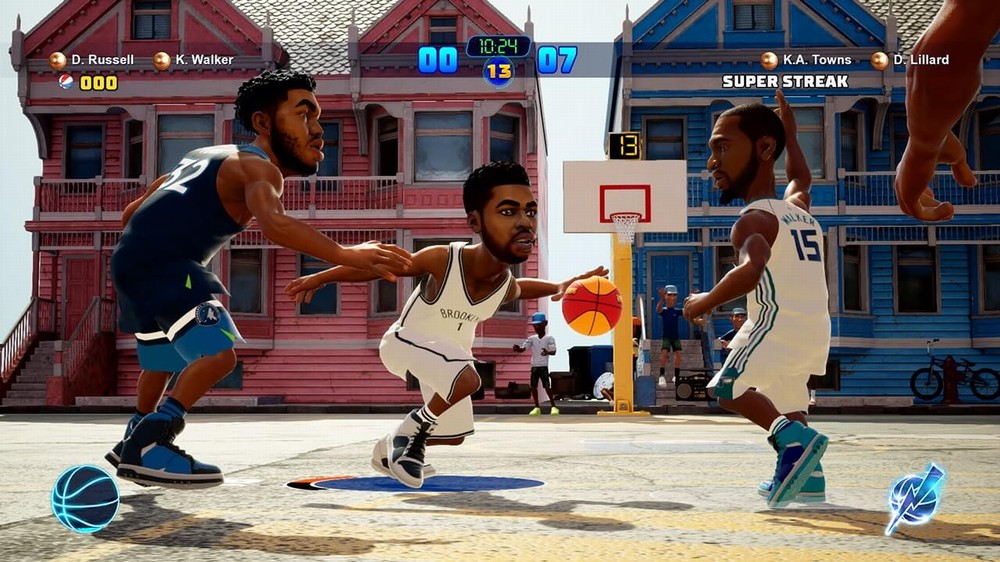 Where most gamers will feel slighted is in the rosters themselves; not so much in who is present, but more in how many are present and how you get more.  Playgrounds 2 features absolute basketball legends like Kobe Bryant, Magic Johnson, Dominique Wilkins, and Michael Jordan – but most are hidden behind a “card-pack” paywall requiring either unobtainable amounts of in-game “Baller Bucks” currency or with actual money via the PlayStation store.

Earning and utilizing the in-game currency takes forever – an hours’ worth of play might yield 100BB, whereas the cost of a bronze pack is 1500BB, so you’re roughly at 15-hours of play to get some low level players.  Obviously, this business model drives gamers to shelling out real money, which can range from  or in one shot with the $10 MVP pack.  Then there’s an entire store around “swag packs” vanity items to dress your players up with style.  All told, gamers could easily find themselves chunking in an additional $10-$50 for microtransactions on top of the $30MSRP for the game, which in my opinion is a little heavy-handed on 2K Sports’ part.  Gamers and critics alike are complaining about the microtransactions in NBA 2K19, one would think that 2K Sports would realize that this is not a popular business model to be engaging in. 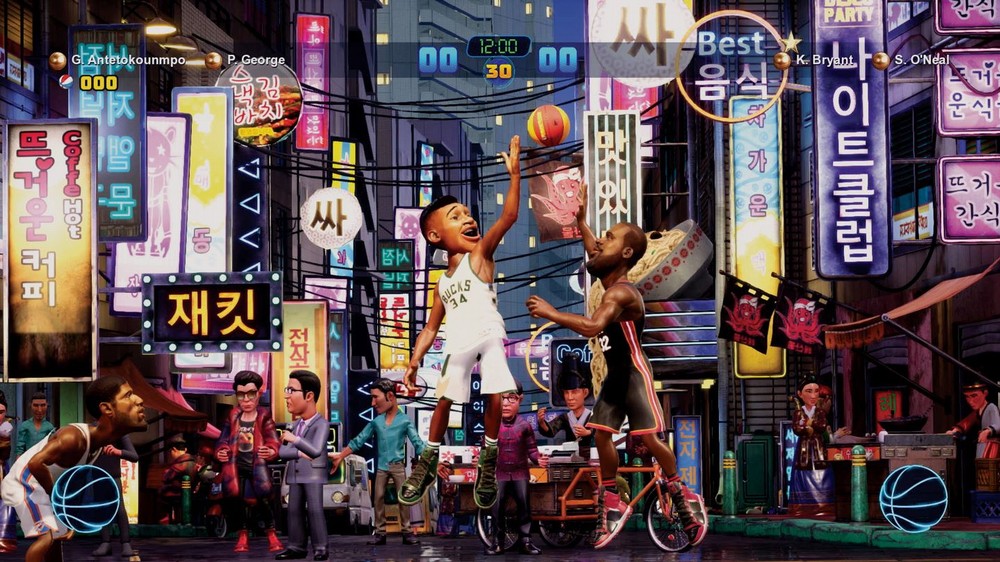 NBA 2K Playgrounds 2 is an incredibly enjoyable arcade basketball title with excellent presentation.  Fans of the NBA Jam style play are sure to appreciate the homage that Saber Interactive has delivered.  A marked improvement over last year’s release – Playgrounds 2 would be a solid recommendation if it weren’t for the high cost of admission.  Even at only $30, the game is a bit overpriced for what is little more than the shell of a game that requires hours of slogging for in-game currency, or the additional purchase of $10-$50 worth of virtual items, to fully complete.