MX vs ATV All Out Review – Switch 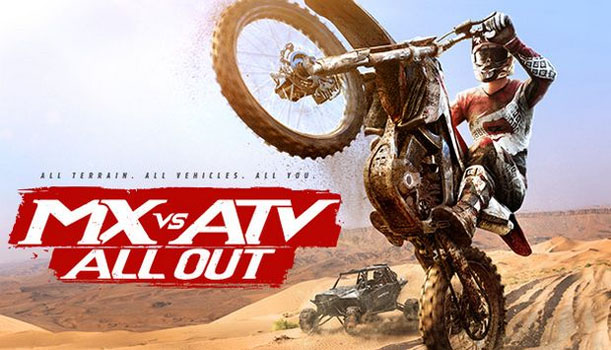 - Long load times and poor performance and optimization makes the game suffer on the Switch.

A great off-road racing game seemingly downgraded to port to the Switch, but still too much for it to handle in a lot of situations.

Originally released back in 2018 for PC and other consoles, MX vs ATV All Out has now been ported to the Nintendo Switch. The game is what I would describe as an arcade simulation. There is a deeply detailed simulation of the physics of the vehicles and their interaction with the amazingly varied and dynamic environments, creating a highly complex and evolving course for you to race on. At the same time, the game is focused on fun, fast, and easily accessible racing, so while you can wreck and flip off of your bike, you can press a button to immediately get back on and start racing again with no penalty. You also don’t have to worry about all the super fine details as in some of the true racing sims, like tire pressures or anything like that, so it falls more into the category of arcade sim, in my opinion, which is perfectly fine.

I really enjoy this game. It is so much fun to hit a jump perfectly and come down with the bike angled just so that you smoothly land and get a boost of speed for the next jump, or to lean your body back a bit and rumble ever so gracefully over a set of bumps without any difficulty. Watching the course get eaten up by the tire tracks of you and your opponents is also really cool and adds a layer of complexity to the game that I did not expect, but I really appreciate. It is really noticeable during a short track race where you see the track get torn up and deformed as you go, forcing you to adjust your line a little to compensate for the changes in the track. 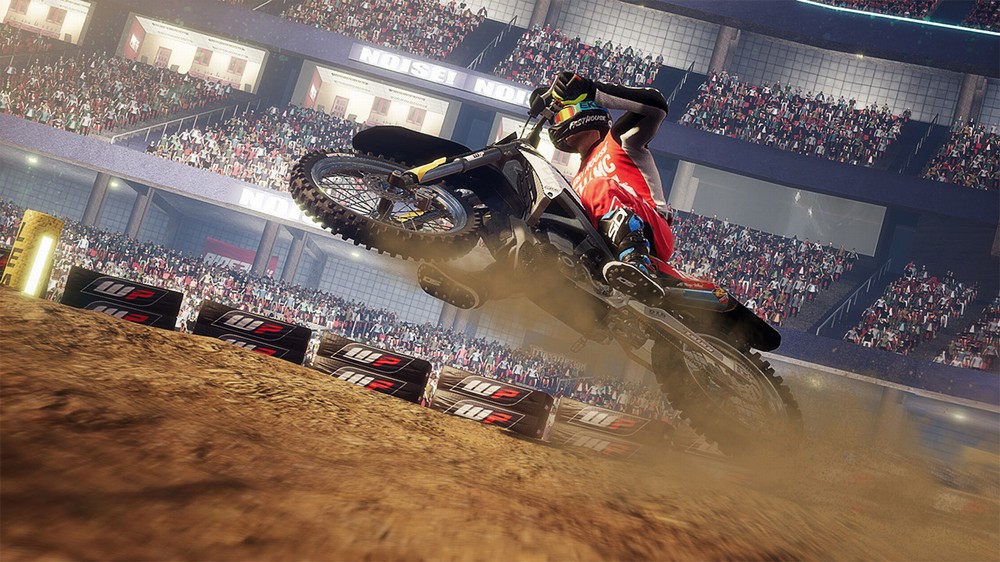 The controls are interesting, as well. You control the steering of the vehicle with your left stick and control the body of your character with the right stick, so you can lean into turns, adjust your center of gravity to take the weight off the front of back wheel as necessary, pre-load the shocks on the front so you can get a bigger bounce when you launch off ramps, etc. You can also use the right shoulder button in conjunction with the sticks to perform stunts like taking your hands off the handlebars and so forth in mid air. Just make sure to get your hands back on the bars before you hit the ground, or else you’ll end up eating a lot of dirt.

The sound effects are really well done, as well, where the revving of the engines is very indicative of how much traction your wheels have. You can hear the difference in the whine of the engine as you move along and use that to help you find the fastest lines. 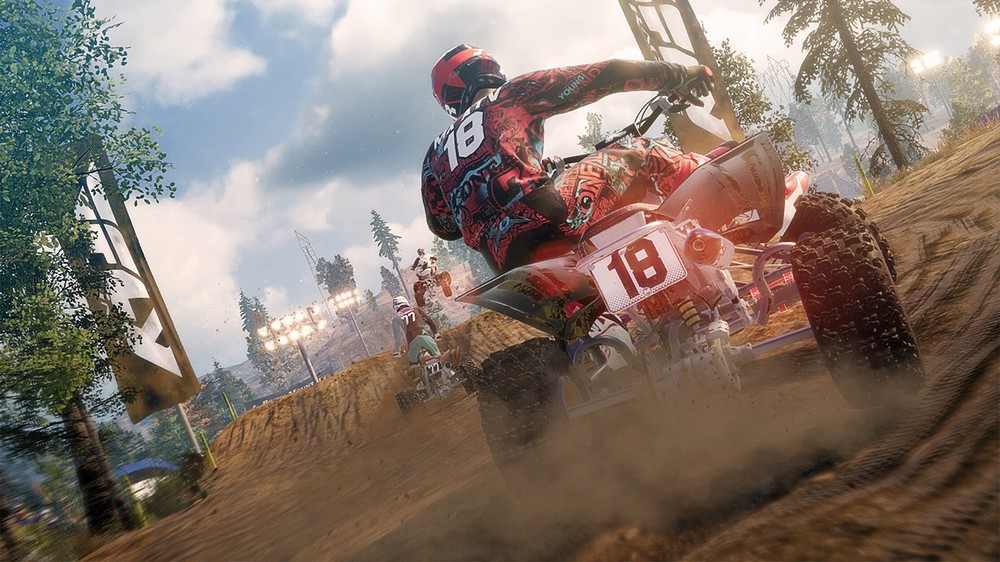 There is an impressive variety of different types of races and events that you can participate in as well. There are checkpoint races that go across wide, open spaces, allowing you to choose your own path and find the fastest route. There are more traditional motocross races that have well-defined tracks and take place in arenas and so forth. There is also an area that allows you to free roam and just have fun with the mechanics of the game and experiment with jumps and tricks.

As you play and participate in events, you will earn money as well, which allows you to upgrade your bike or purchase other vehicles like ATV’s, UTV’s, buggy’s, etc, each with their own unique driving behaviors. 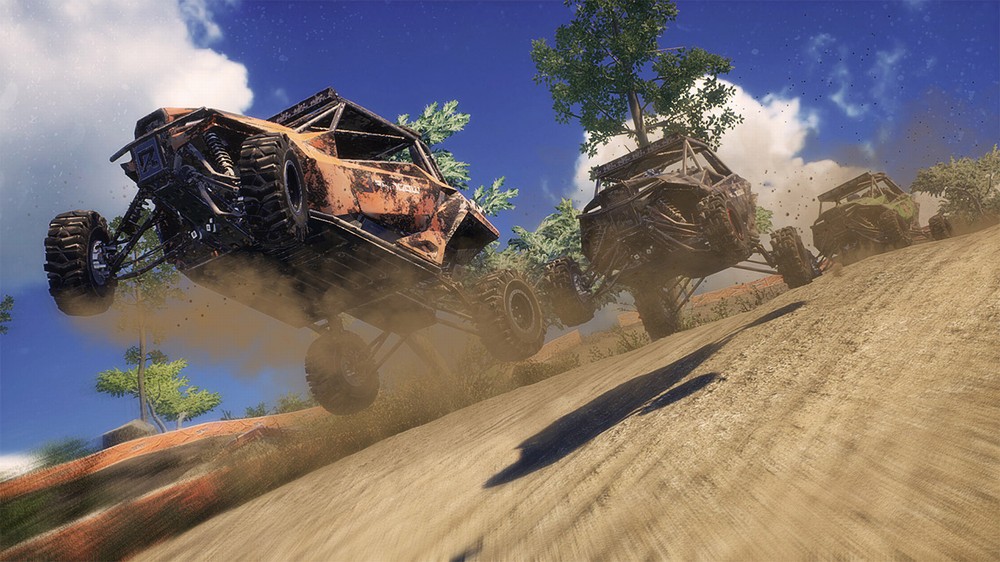 Multiplayer is also available, allowing you to play 2-player local split screen or online with up to 8 players. This is great, since racing against AI is fun, but never quite the same as competing against other people. But, I would say that the performance of the game is noticeably affected by playing multiplayer.

Which brings me to my biggest gripe with the Switch version of this game. Performance. Unfortunately, though there were obvious concessions made when porting this game to the Switch, like an apparent downgrade in the visual fidelity that is available on other versions, I think that the complexity and dynamic nature of the game taxes the capabilities of the Switch too much. Most noticeable in the free roam area and while racing against a full field of opponents, the game stutters and lags and feels mushy and unresponsive with the controls. That, combined with the frustratingly long load times between each event and when going back to the free roam area, which serves as a kind of hub between events, I felt like it highlighted the severely underwhelming power of the Switch. 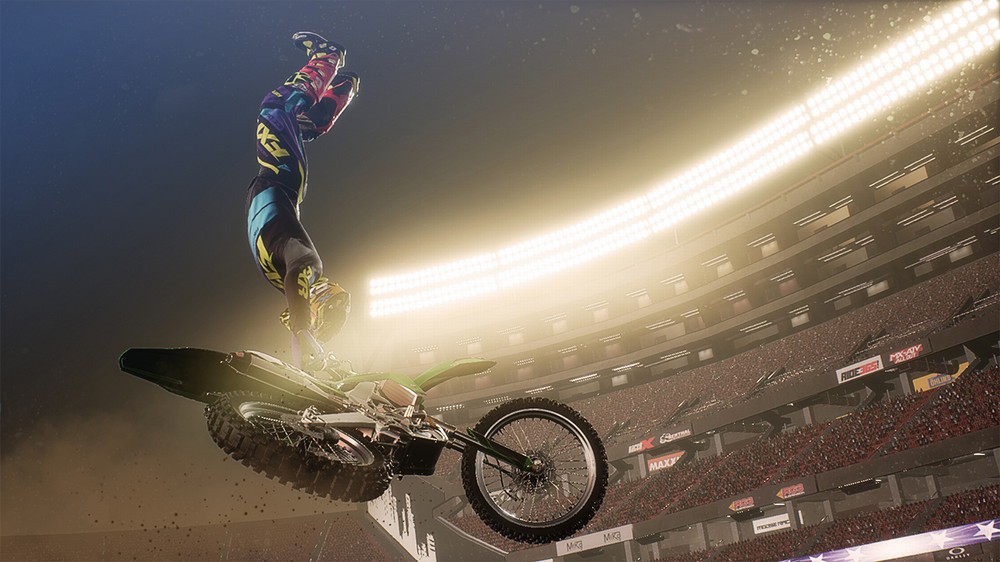 As disappointing as the performance might be on the Switch, though, I still really enjoy the game. I think it is a fantastically fun game that they did as best they could to port to a system that struggles to run it well. I think I would suggest that if you have multiple consoles, or a PC that you probably look to get the game on something else, but if all you have is a Switch, then it is a great game and, while the performance isn’t great, it doesn’t make it unplayable or unenjoyable.