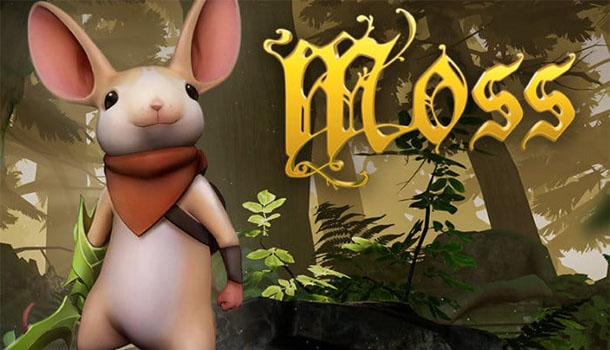 - No Achievement alerts in VR

Moss is a game-changer for VR, setting a new high bar for immersive gaming that will prove once and for all that VR is here to stay.

Once thought as a luxury accessory to a niche market in gaming, VR prices are steadily dropping. PSVR has dropped nearly 50% and you can now get an Oculus Rift with Touch for just $200 more than I paid for my Touch a year ago. There has never been a better time to jump on the VR bandwagon, and it’s great games like Moss that help spread awareness of VR and make it more enticing to the general public.

Originally released this past February on PlayStation VR, Moss earned critical acclaim as one of the standout VR games of this generation. At the time we all thought this was going to be a PSVR exclusive, and until 24 hours ago I had no reason to think otherwise until I was blindsided by a press release about Moss now being available on PC for both Vive and Rift. Boasting increased resolution and two-handed motion-control support I was giddy with anticipation as I prepared to immerse myself in the wonderful world of Moss all over again. 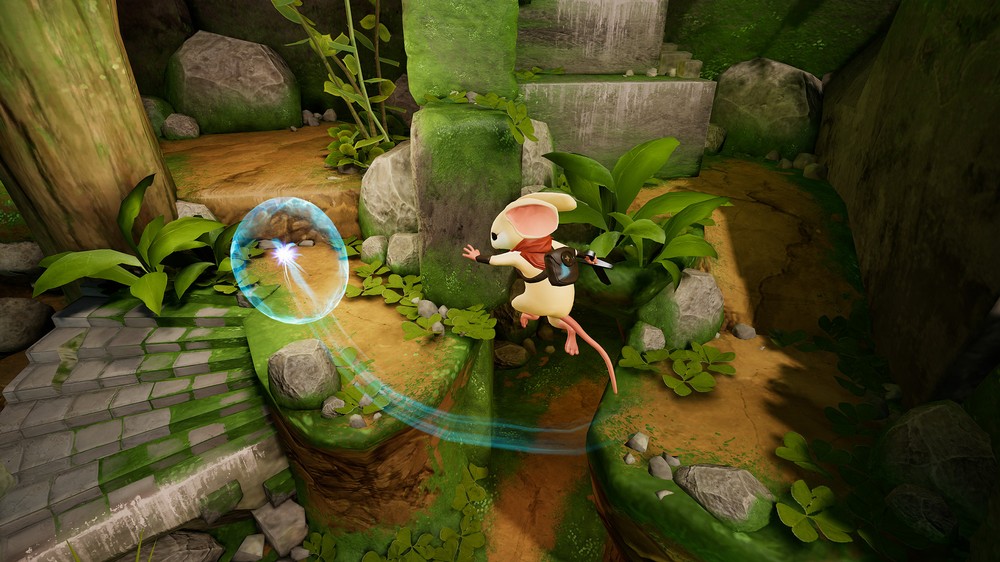 Moss is available directly on the Oculus store or a Steam version that supports both Rift and Vive. For the purpose of this review I chose the Rift because I knew I would be playing for upwards of three hours and the near-weightless Touch controls make marathon VR sessions effortless. The analog stick on the Touch is also much better for controlling Quill than the d-pad on the Vive wand. For those that have already played Moss on the PSVR and also have a Rift or Vive I would strongly encourage a double-dip, as the PC version is light years beyond in technical quality compared to the PSVR.

It’s easy to see that this wasn’t a quick and dirty PC port. Polyarc put some genuine effort into bringing this to a more powerful system.   The game auto-detects your VR of choice and uses ghostly blue images of your controller to offer gameplay tips, and while the game was perfectly playable using a controller on the PSVR, having independent hand controls works so much better when trying to move Quill with the left stick and manipulate the environment with the right grip. 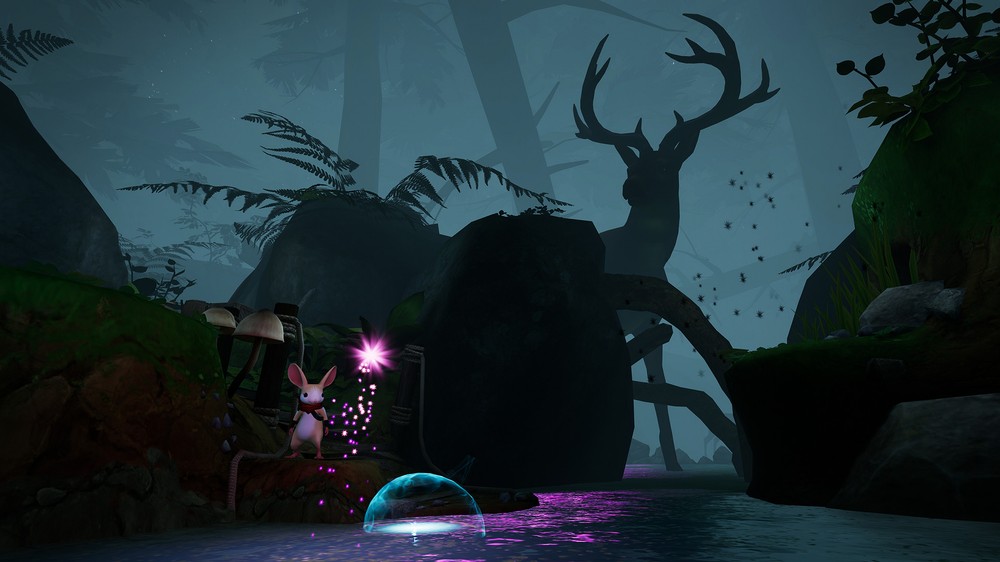 At its heart, Moss is you typical 3D action-adventure puzzle game. You play as the adorable Quill, a tiny white mouse who discovers a mysterious crystal shard that ultimately leads to her uncle’s capture by evil forces. Armed with her trusty sword and led by her firefly-like guide, she sets off to rescue her uncle, but the path is long and treacherous with all sorts of fiendish traps, brutal monsters, and a boss fight you won’t soon forget.

Moss is Book 1 of what will hopefully become a library of sequels, and is presented as a storybook. The game opens and periodically returns to a massive library where you physically turn pages in a wonderfully animated storybook to advance the story. The library also has a corked glass jar containing your Relic Dust, and a mosaic design that slowly fills in with Scroll fragments, the two collectibles that will have you replaying Moss over and over again – not that you ever need a reason to revisit this magical world. 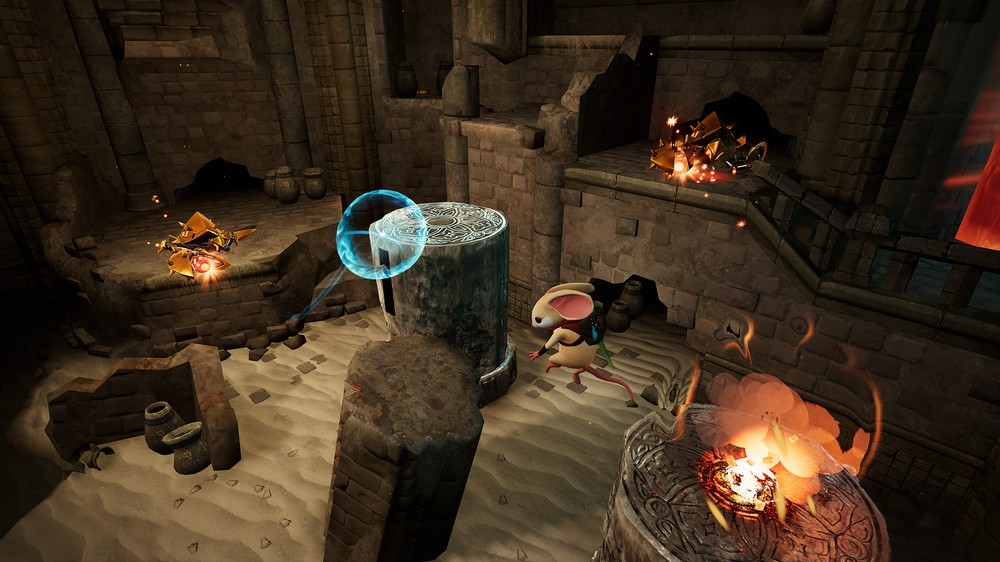 Once you go inside the book you’ll find a fantastic and immersive world that is presented as a series of intricately detailed scenes; all viewed from the perspective of the Reader. Imagine if somebody had built the best physical model of a game world and you were standing over it, able to look around corners or over walls or duck down and peek inside a door or window. That is exactly what Moss is like, only you also get to control Quill, using the analog stick to move her about with incredible animated detail right down to these cute spin moves she does when vaulting a ledge.

As the Reader you will also get to interact with the world, pulling or pushing blocks, yanking a giant chain, opening massive doors, pulling back crossbows, lighting torches, or even interacting with enemies in real-time when Quill is outnumbered. You can take control of some enemies and use their abilities to help Quill solve navigational puzzles like standing on pressure plates or exploding walls.   You also get to interact directly with Quill, rubbing her head to restore health, even in mid-battle, offering up the random high-five, or even carrying key inventory items. While Reader interaction is probably only 25% of the mix, when the player does get to physically partake of the game it is effective and rewarding.

As mentioned above, there are some collectibles in the game; some obvious and some that require the player to seriously look around the levels. There is a chapter select in the options, but you have no way of knowing where any of your missing collectibles were overlooked so prepare to play from the start. There are also some clever Achievements that will require some specific and not-so-obvious actions to earn…have fun. My only complaint with Steam achievements is they do not show up in VR so you don’t know you earned them (or missed them) until you exit the game. This can be slightly annoying for achievements like smashing all the furniture in a bar or chopping down a certain amount of grass. 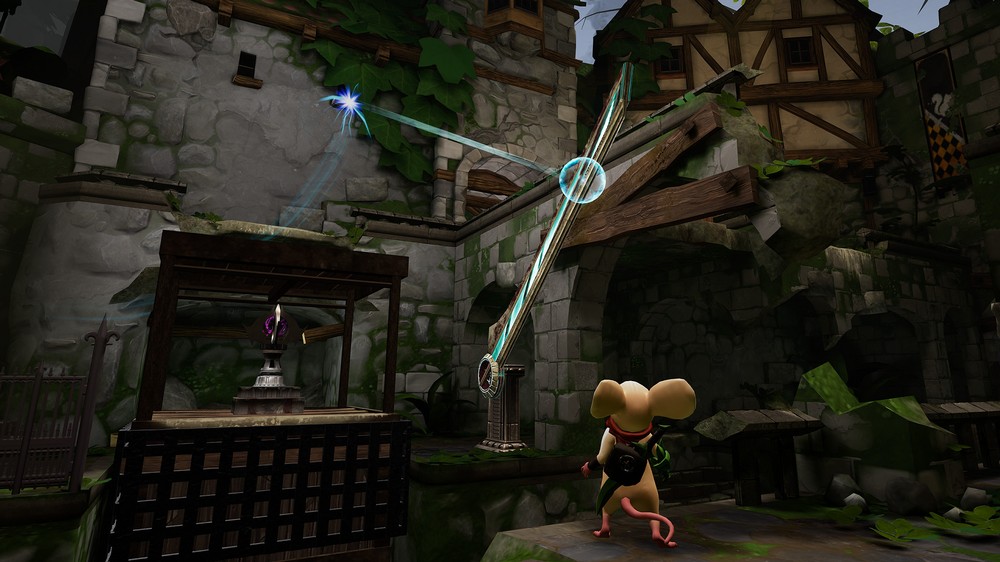 While the PSVR version of Moss was a stunner it can’t compare to what you will see on the PC with a quality video card. I was using a GTX 1080ti and was blown away just by the improvements in the opening library and then I realized the game had defaulted to LOW quality.   Once I boosted the setting to HIGH and entered the world of Moss it was like being dropped into an animated Don Bluth Disney feature. The FOV, the added resolution, the lack of jaggies and screen door effect, the improved draw distance, and the enhanced special effects truly created an alternate reality. You will find yourself in a totally convincing, living, breathing storybook world you can explore from any angle.

The audio is fantastic making the most of 3D position sound so you instantly know where to look when a twig snaps or a metallic bug skitters across a stone floor. Much of the game is played in realistic silence with only the sounds of nature to breech the stillness. The narrator will occasionally offer up a morsel of story and a wonderful score from Jason Graves rises and falls with the gameplay and storytelling. Stick around for the page-turning credits to hear a captivating closing song with lyrics beautifully sung by Malukah.

Moss is a 3-4 hour game depending on how much you immerse yourself in the world and truly explore every nook and cranny of every scene. There are a few puzzles that may stump you but nothing you can’t figure out over time, and you’ll likely die and have to retry a few of the action set pieces; especially the final boss fight, but the game never gets frustrating and you never have to replay more than the last minute or two. Even the lengthier arena fight segments checkpoint mid-battle. 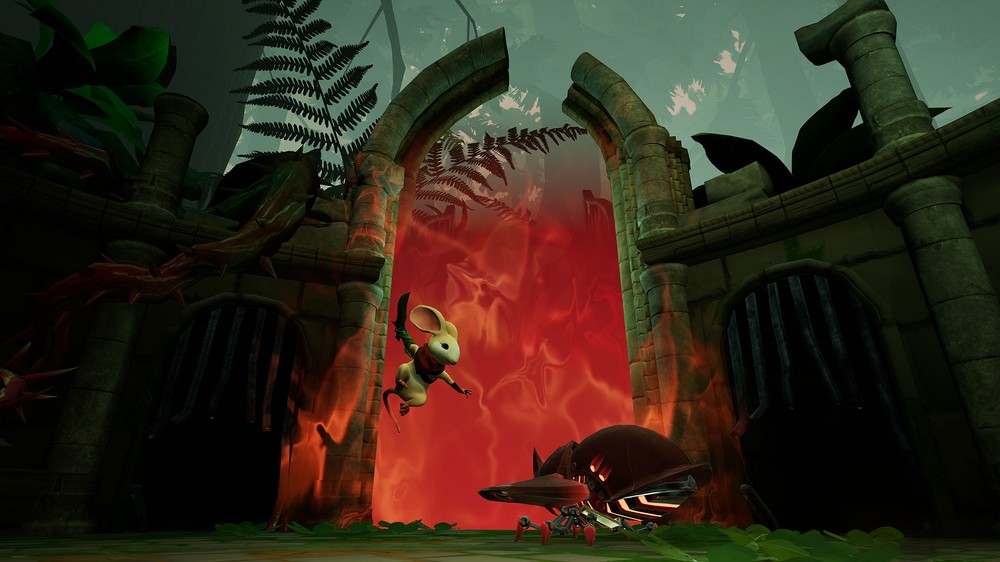 My only complaint with the PSVR version was the occasional loss in tracking and the game going off-center periodically.   The motion tracking for both Rift and Vive are spot-on and totally stable, and while Polyarc offered a quick one-button re-center option I never once had to use it beyond the opening menu.

While I can’t possibly say that a 4-hour game is worth spending $400 on an Oculus Rift, I can say it is certainly a powerful inducement, and if you had any urge to jump into VR now is the time. With the recent price drop of Rift and a game like Moss, along with the hundreds of other titles currently available, now is the time to leave this world behind and immerse yourself in the endless possibilities of virtual reality.

Moss would have been an amazing game even without the VR headset, but by building this game from the ground up specifically for VR, Polyarc has achieved something breathtaking and life-changing, not only for VR tech, but for the expectations of what gamers will be demanding for future VR titles. I plan on getting lost in the wonderful world of Moss countless more times, as I anxiously await Book 2. Hopefully, we won’t have to wait long.