Max: The Curse of Brotherhood Review – Xbox One

Stunning visuals, seamless blend of action and puzzle-solving with ramping challenge from start to finish.

If you have an Xbox One and $15 then you have no excuse for not playing the best Xbox One game available.

Max: The Curse of Brotherhood is now out for the Xbox One and what a surprise this game turned out to be.   I vaguely recall seeing this title during Microsoft’s Xbox One press event at E3 this year and then just as quickly forgot about it.   Well, shame on me because Press Play’s new action-adventure game is not only one of the best platforming games I have ever played; it is also my pick for Best Xbox One Game of 2013.

The game opens with a short CG cutscene that looks just as good as anything you’d see for movies or TV – something along the lines of Jimmy Neutron.   It is here we meet Max, a young boy not unlike Jimmy Neutron with a touch of Bart Simpson, Willie Beamish, and even Andy from Heart of Darkness.  Like many boys, Max has an annoying younger brother, Felix, who he accidentally banishes to another world when he reads a magic spell off the Internet.   Realizing his mistake Max jumps into the vortex and sets off on a grand adventure to rescue his brother and quite possibly save an entire world. 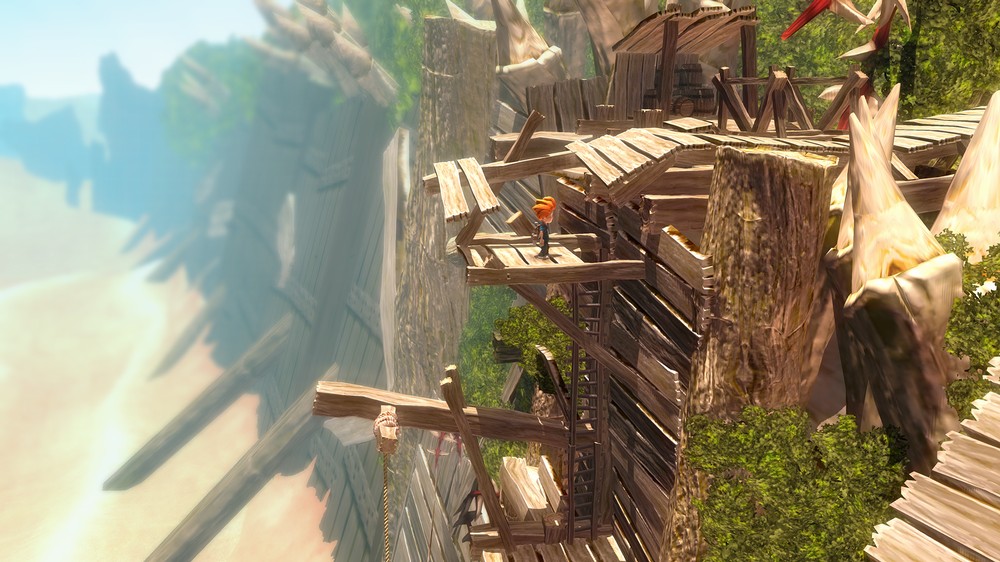 The Curse of Brotherhood is a next-gen follow-up to the 2010 game, Max and the Magic Marker, but having never played that title this was a totally fresh experience for me.  I was left speechless by the stunning visual design, the colors, the textures, the smooth framerate, and the dynamic perpetual zooming of the camera that was always putting a fresh 3D perspective on traditional 2D gameplay.   And I was constantly on the edge of my seat with the thrilling and imaginative gameplay that seamlessly blends traditional run and jump platforming with some creative puzzle-solving that really had me thinking.

The first level starts off much like any standard platformer with running, jumping, climbing, and the occasion swinging rope or vine.  It is also on this level that you will meet a giant ogre-like creature that will prove to be your nemesis throughout much of the upcoming adventure.  After a visit to a crazy old lady’s treehouse you will be able to wield the power of your new magic marker; only this marker has real magic, and that is where the genius of the game design starts to shine.

As you advance through the various chapters of Max: The Curse of Brotherhood your marker will be imbued with various powers of creation.   At first this is as simple as summoning rocky columns to erupt and rise from the ground, but later you can summon branches, vines, water plumes, and even fireballs.  The game introduces each new ability in a seamless fashion then expands upon the potential of that ability with increasingly challenging puzzles, and as your marker gains new powers, the puzzles will rise to the challenge, often demanding you to mix and match your powers of creation. 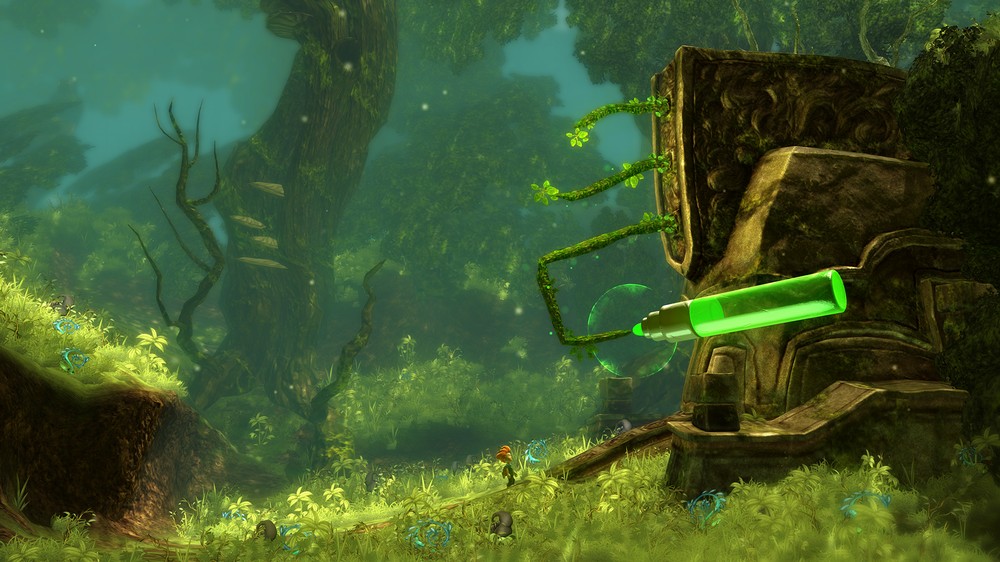 The control scheme is a bit awkward at first, but you do get used to it.  To use the marker you simply hold down RT and a ghostly pen appears on the screen that you can steer to any nearby hotspot; orange for earth, green for branches, yellow for vines, blue for water, and purple for fire.  You then hold down A and move the stick to draw in real-time, controlling the angle of the branch, the flow of the water, the direction of the fireball, or even the swing of a vine (very important in some puzzles).   The height of a column or length of a branch or vine is determined by the amount of ink in your marker (unique to each spawn point) and indicated with a shrinking circle as you draw.  You can also summon the marker and tap X to crumble an earth column, cut off a branch or vine or stop or redirect a water plume.

It all sounds fairly basic, but the way the designers have woven these concepts into the gameplay and environments is nothing short of awe-inspiring, especially when you realize the unique relationship the elements share.  Branches can be set on fire then cut off and moved around for a new fire source.  Vines can be connected to branches for horizontal rope climbs or cut off at the source but still connected to the branch for a new swing point.  Water plumes can shoot you or other objects to distant ledges or used to turn lava creatures into rock.   The game even mixes up the use of these abilities by presenting some in pure puzzle form and others as critical action points in exciting chase sequences where the game will go into slow-motion giving you precious seconds to spot the marker and point and draw the object required to stay alive.

Max: The Curse of Brotherhood has a look that will appeal to kids but make no mistake; this game can be challenging and will certainly delight older kids and even adults.  Some of the puzzles stumped me for a moment but most have logical resolutions once you realize how all the various marker abilities function within the limitations of each puzzle.  But no matter how small, large, or difficult the puzzle, each time I solved one I had that same endorphin rush I felt when playing games like Portal 2 or Trine 2. 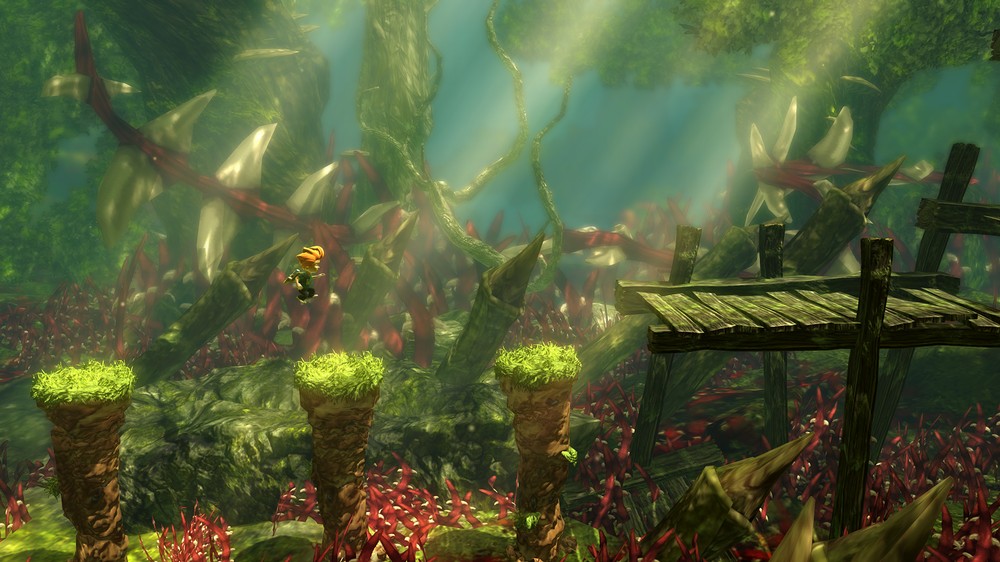 The presentation is clearly next-gen quality, achieving PC quality status with rich vibrant colors, lush detailed textures, smooth animation and great camera angles that show off these amazing environments.  Each chapter has a unique visual theme that often shares an elemental identity with the latest power of your marker such as earth, water, or fire.  Lighting is particularly impressive, especially in one underground level that is mostly pitch black where you can use your marker as a “flashlight” and the mushrooms and lichen will realistically absorb this light and continue to glow when it’s time to return control back to Max.   The sound design is equally as impressive with ambient level noises, realistic sound effects, exciting music, and suitable voice acting given the material.

Collectors have not been forgotten, and there are 75 evil eyestalks hidden around the land that Max needs to find and destroy.  While these are almost always visible on the screen if you look hard enough, they usually require additional puzzle-solving and a slight detour to reach.  And there is also a Tree of Life medallion that has been shattered into 18 shards.  These are much harder to find than the eyes, but thorough gamers should have no trouble finding all of them without consulting the web.  The game has a fantastic summary screen that lists the eyes (in the order they appear) and the medallion shard indicator for each chapter, and if you do need to replay a level to find a missing item you only need play as far as that item since all collectibles are registered as you find them and not when you complete the level.

Platform adventures are the foundation of console gaming, and I had numerous fond flashbacks of playing Pitfall on my Atari 2600 back in 1982.  We’ve come a long way in 30 years, and even though I loved every minute I spent playing Max: The Curse of Brotherhood, I am sure this is only a hint of what is to come for the Xbox One.   I can’t think of a better launch window title that exemplifies this new system or the future potential of gaming as we move into a new generation of interactive entertainment. 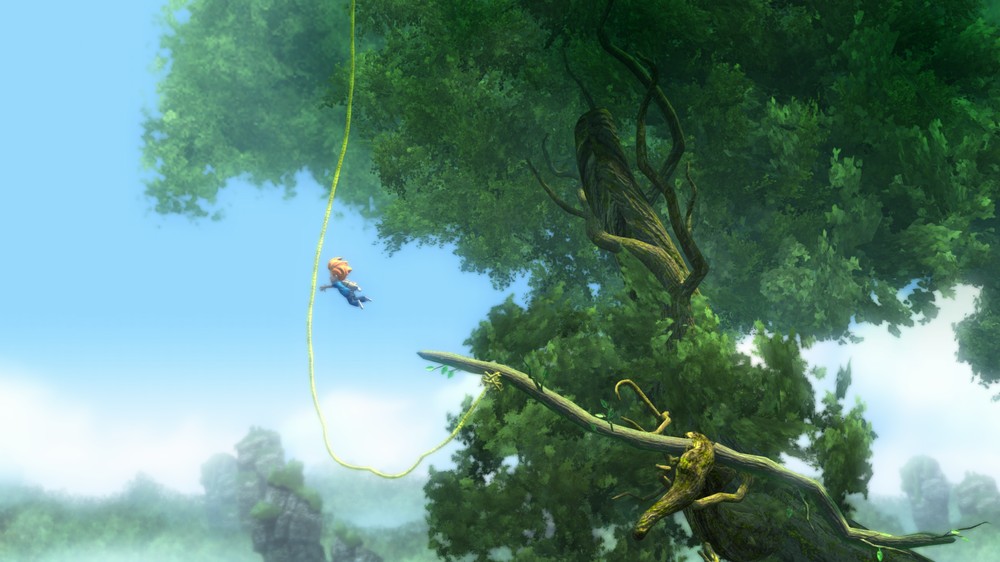 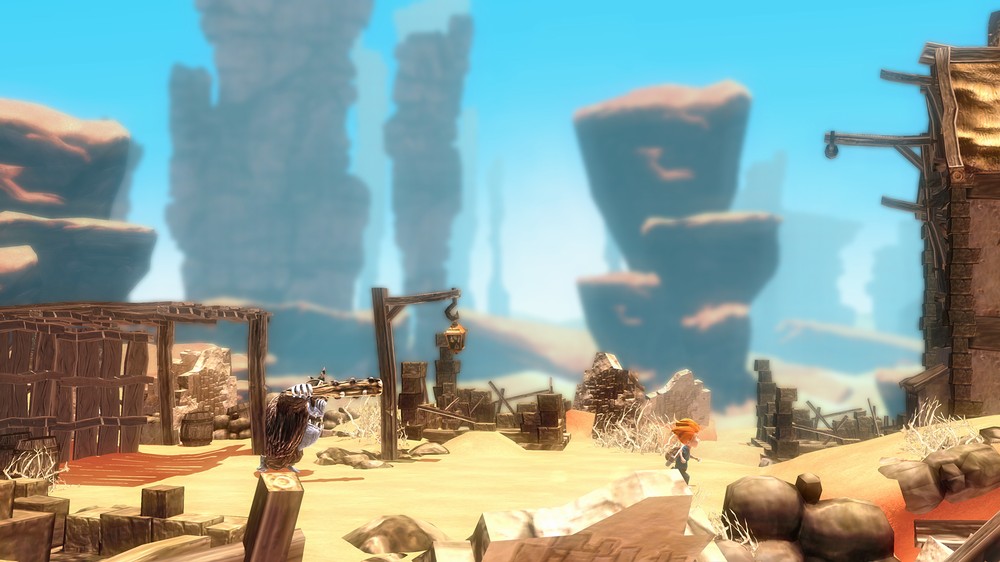 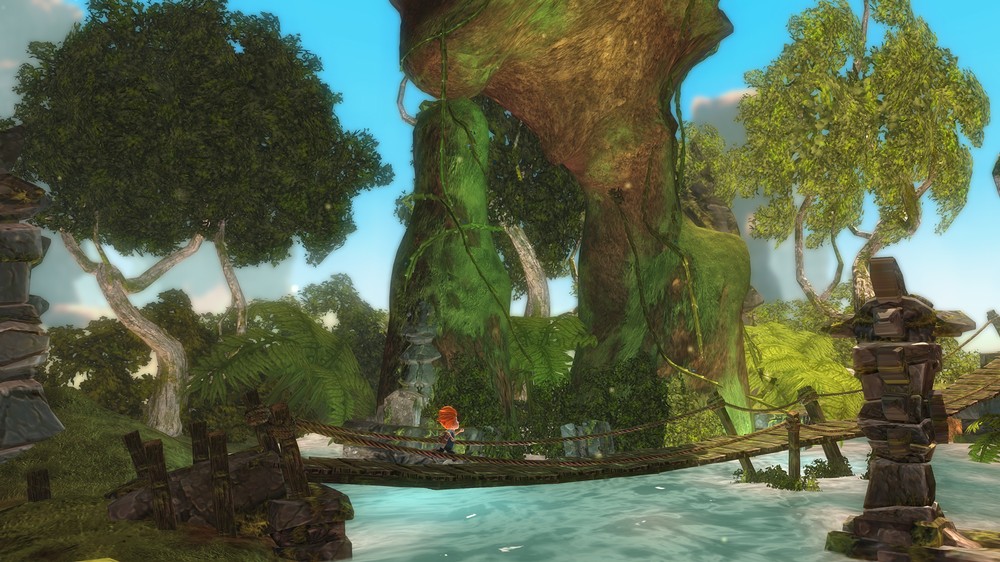 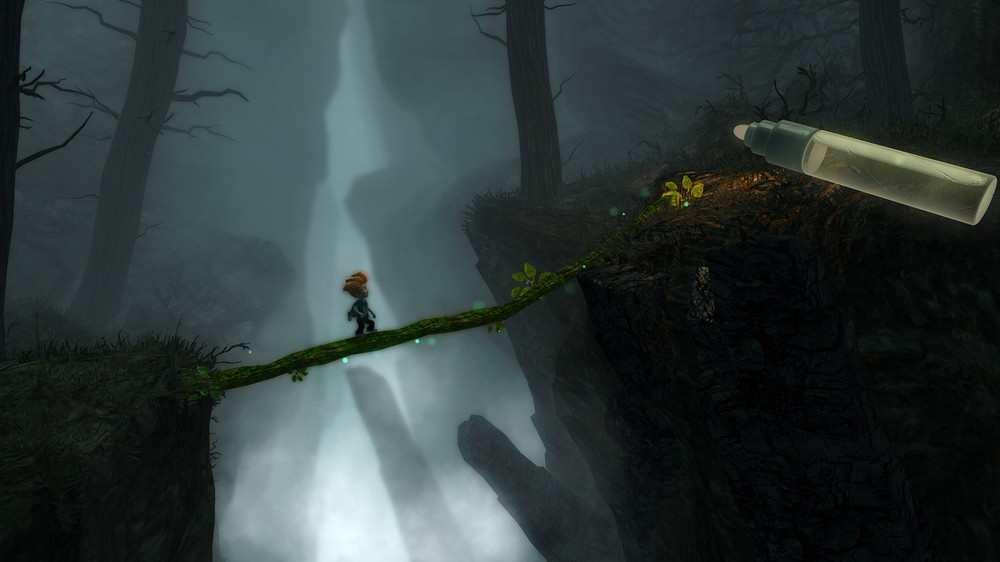 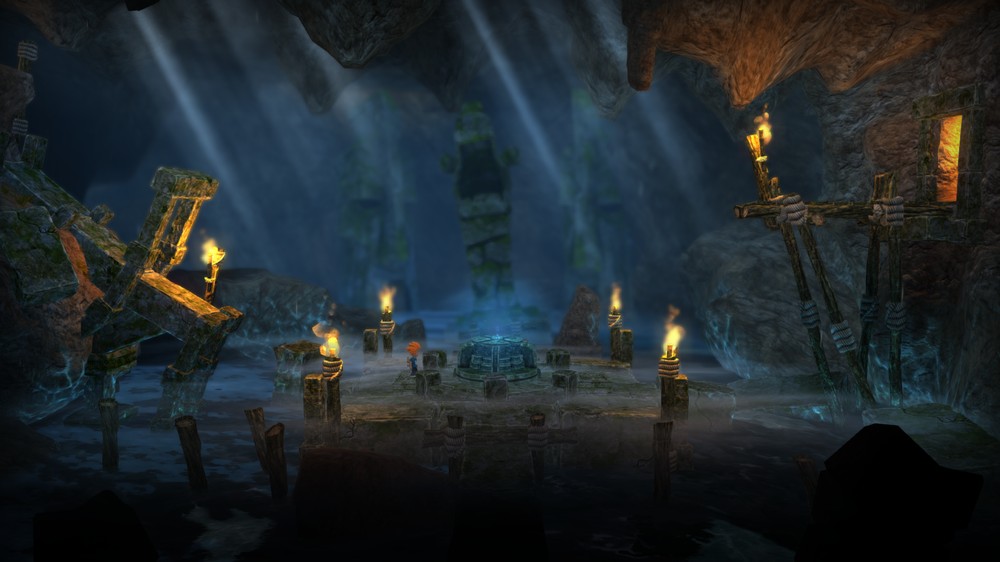 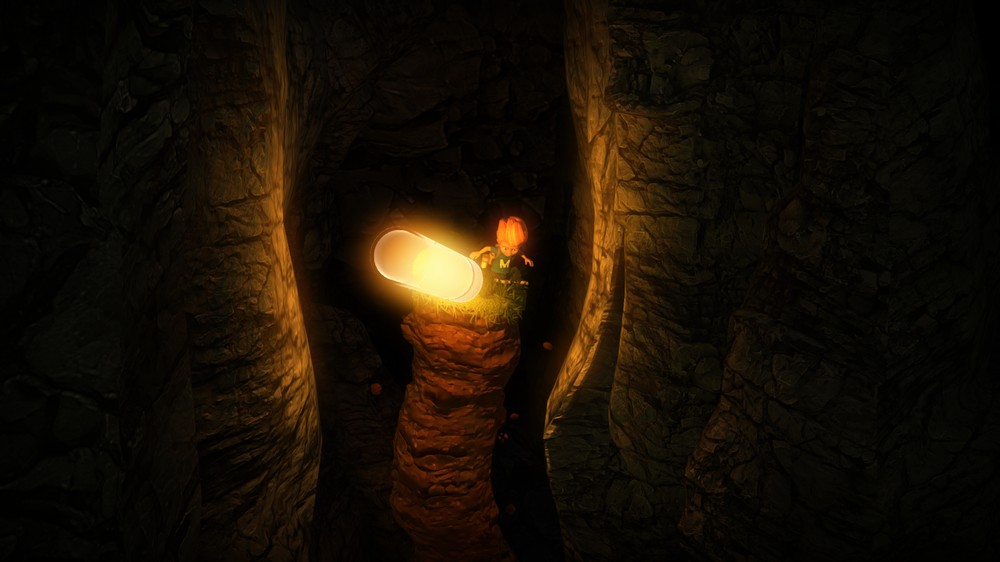 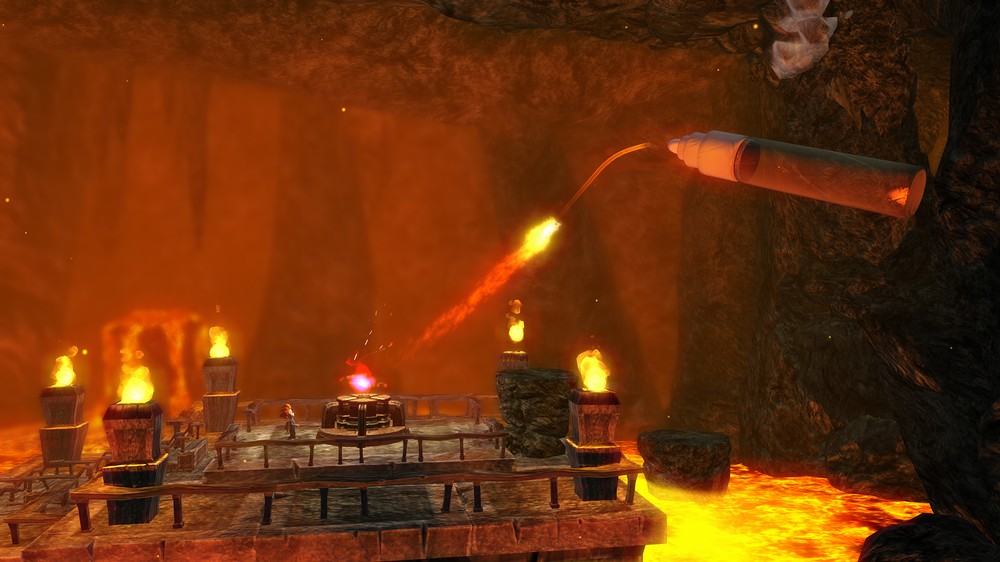 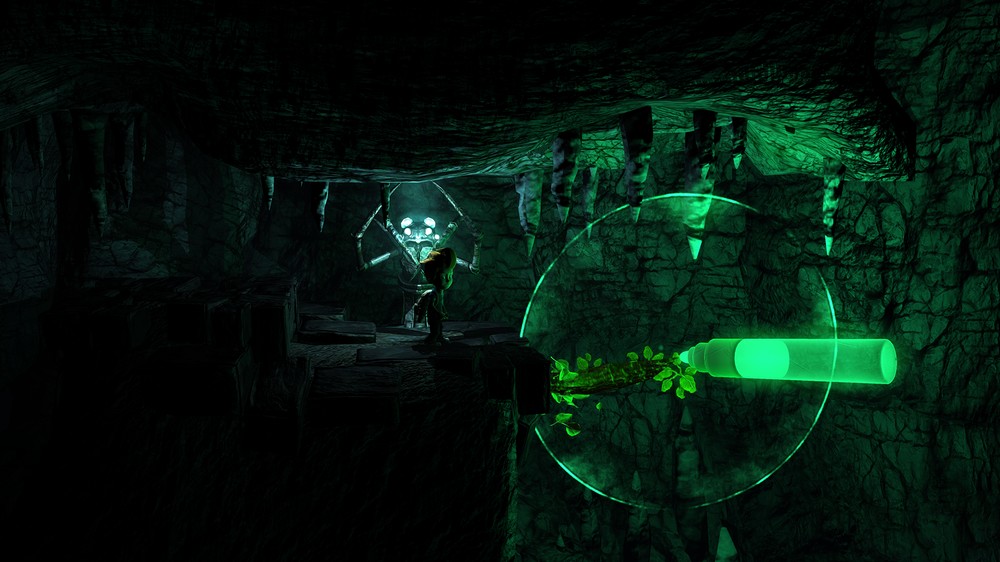 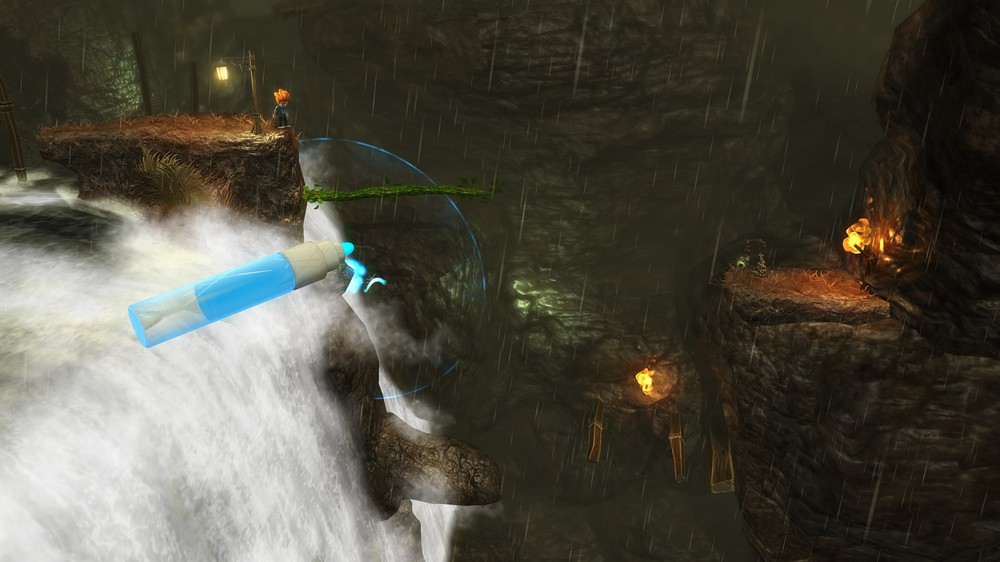 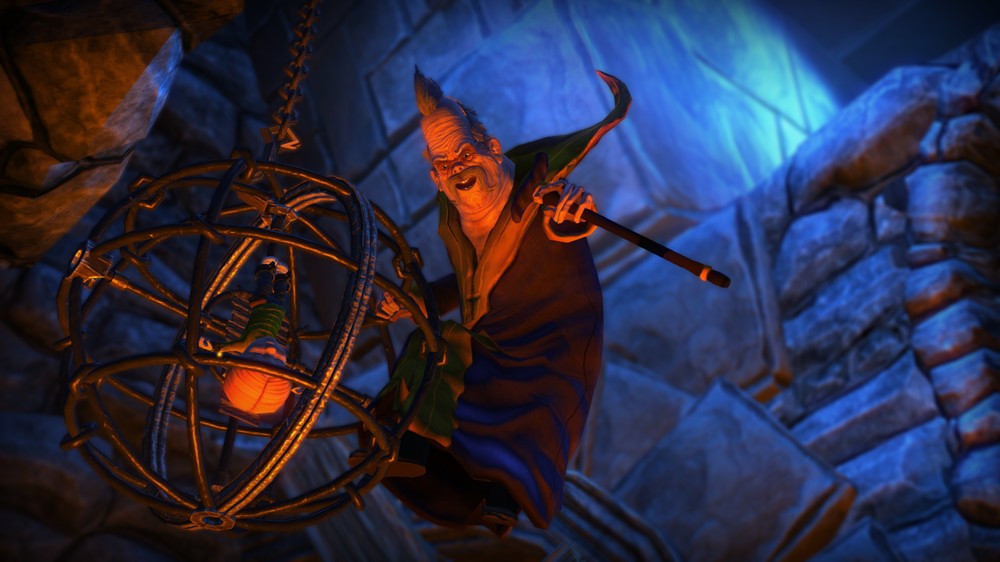 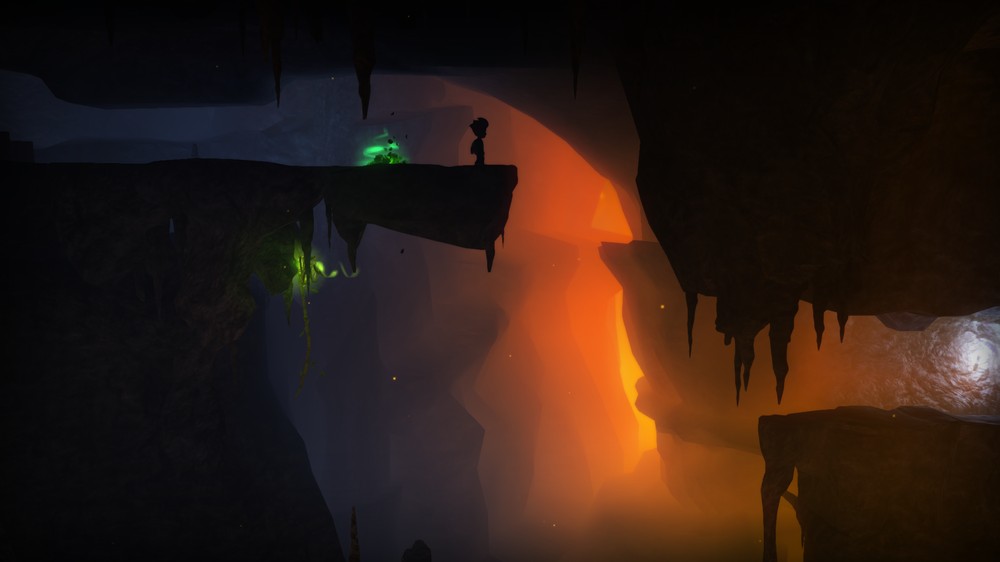 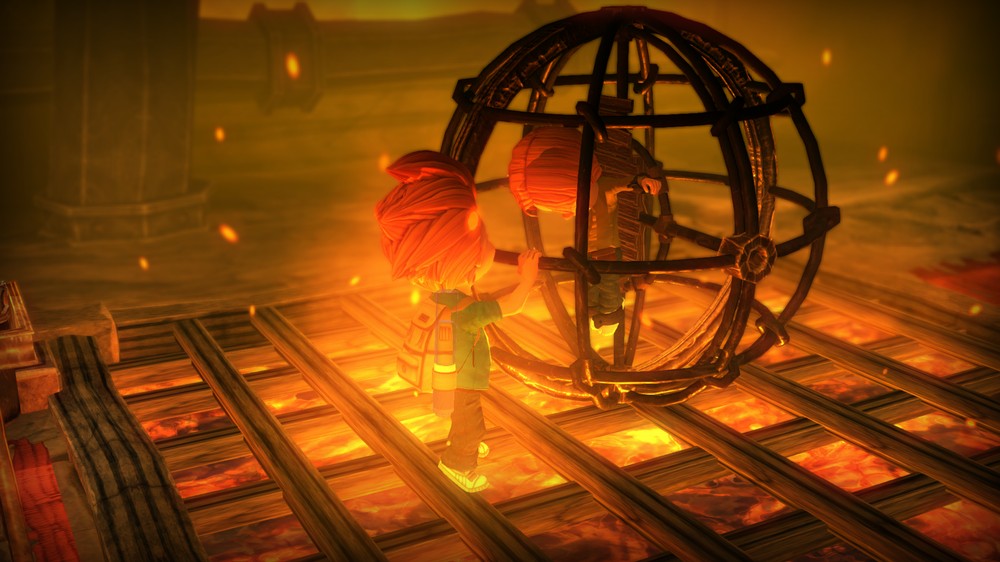 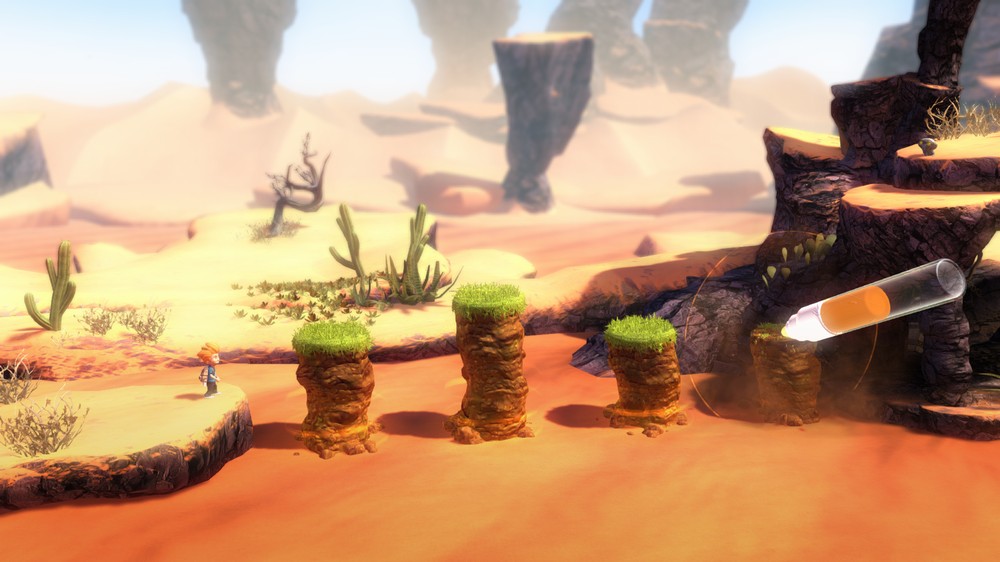 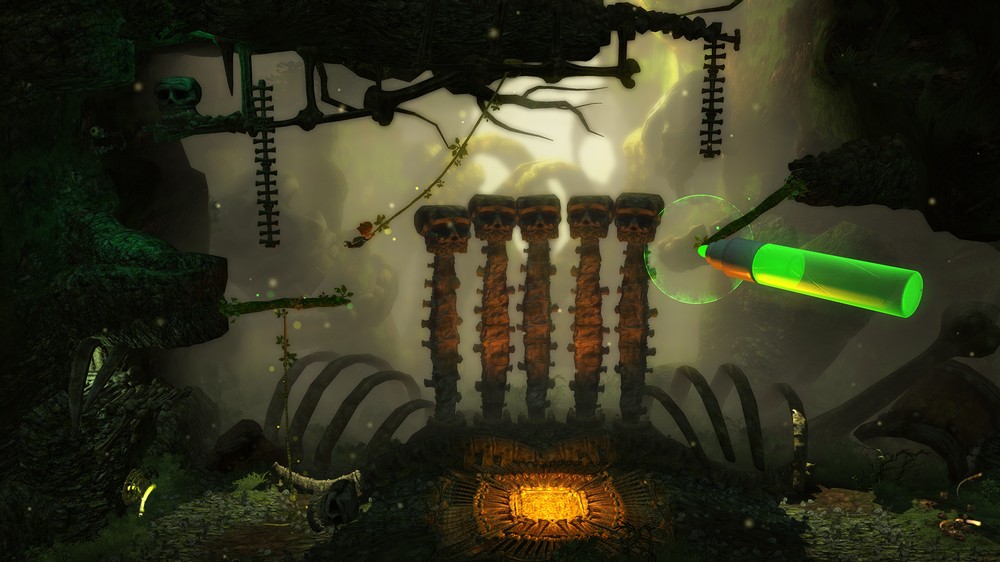 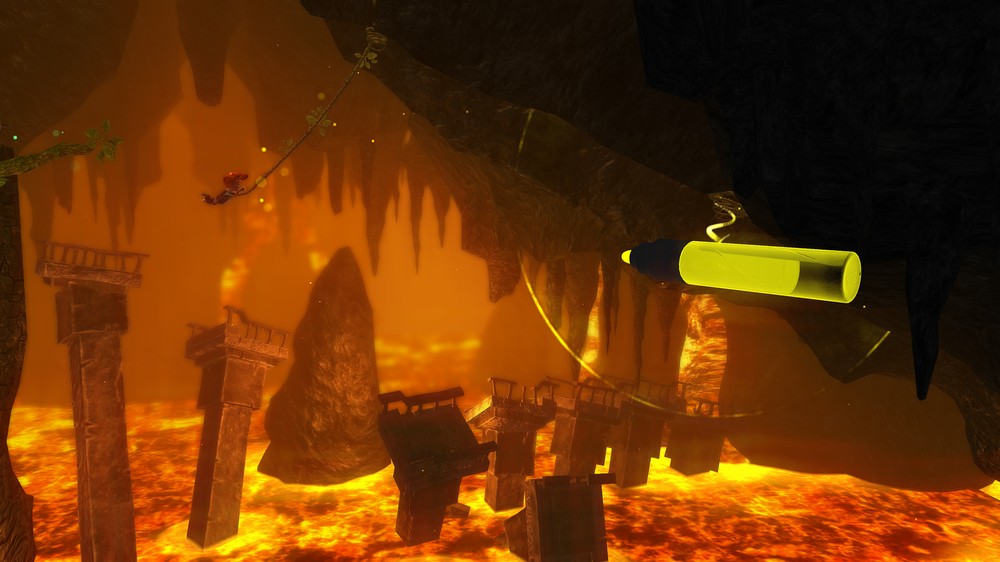 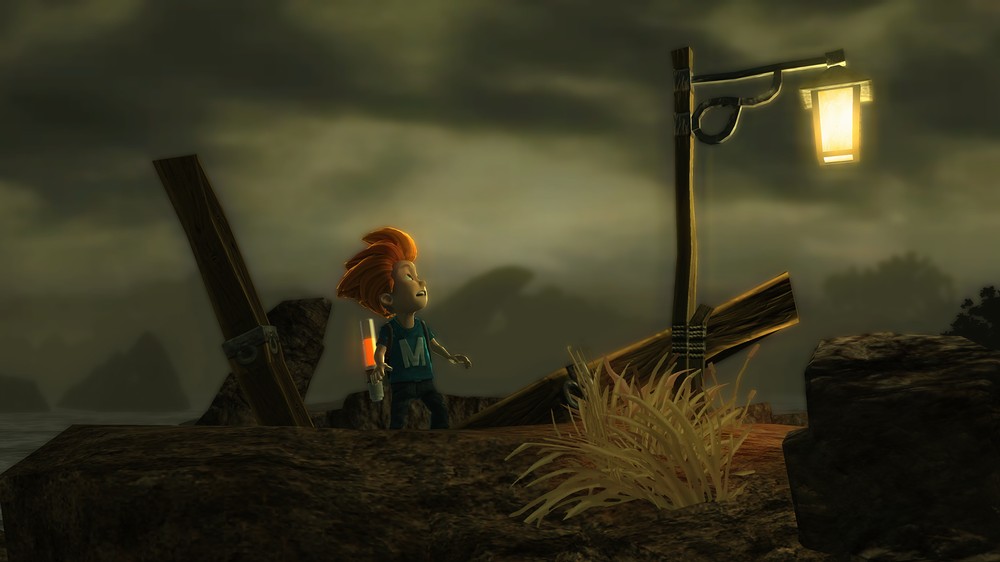