Marvel’s Guardians of the Galaxy: The Telltale Series Review – PC 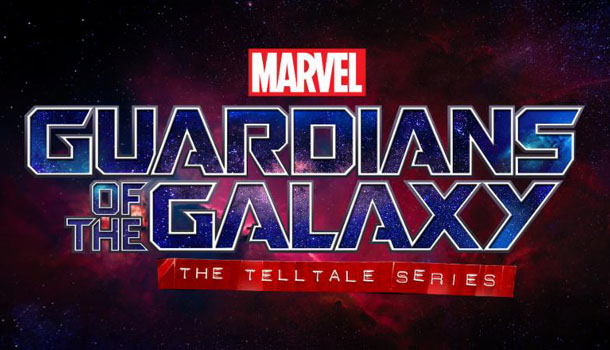 Guardians of the Galaxy takes the Telltale adventure formula to the next level.

With the much-anticipated film sequel just weeks away you couldn’t ask for a better release window for the first episode in Marvel’s Guardians of the Galaxy: The Telltale Series, and after playing (and watching two other people play) the first episode I have to admit, this might just be the best Telltale adventure game in their library – assuming the remaining four episodes can manage to hurdle the high bar “Tangled Up in Blue” sets.

Most gamers are going to go into this series with some preconceptions about how this game is either going to mirror the films or the comics, but honestly, the writers at Telltale have managed to craft a script the walks the impossibly fine line of both to deliver an interactive action-comic that goes well beyond the foundation that even the Batman series established. While many will grouse about the lack of movie stars lending their voices (and likenesses) to the game, I, for one, couldn’t be happier with the existing voice cast, even if Nolan North (Rocket Raccoon) is the only name I recognize.

Much of this praise has to do with the fantastic script the actors were given. The conversation flows naturally, even when there are multiple characters interacting. There is also a genuinely interesting story happening that begins with an emergency call from the Nova Corps who are under attack by Thanos. Star-Lord agrees to save the day – the terms of which you get to decide while simultaneously putting his entire team into one of the most epic quick-time battles to ever launch an episodic adventure game. 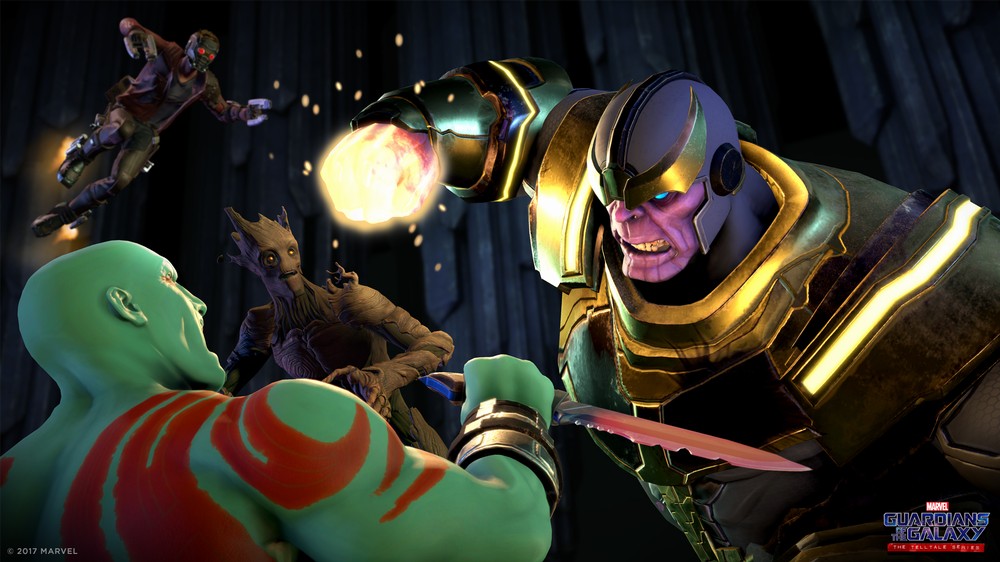 So much happens in the first thirty minutes of the first episode that you wonder how Telltale is going to keep things going, but when the Guardians come to possess the Eternity Forge, they instantly become the prime target of every galactic evildoer out there. And all the while Peter must constantly interact with his team to work through their various personality and emotional conflicts and keep the team together.

Guardians of the Galaxy takes the Telltale adventure formula to the next level, not only with some of the best graphics we’ve ever seen in a Telltale series, but also in some seriously slick integrated control prompts and new systems. What started in Batman has now been perfected in Guardians, as the action prompts are now seamlessly overlaid into the game graphics. The big battle with Thanos was a pure joy to experience.   As always, the game is pretty forgiving and you usually have to miss two or more prompts before you are kicked out to the kill screen.

Also new to Guardians is Peter’s rocket boots that allow him to fly in certain situations by using the D-pad to adjust thrust to access three levels of verticality. The other cool addition is the com link that allows you to hold L2 and pick a teammate who isn’t with you and ask them questions or get backstory details. I was also impressed how the designers created the battles to use all the heroes, moving back and forth between them. Yes, Peter is the main protagonist, but you’ll get to interact and use the entire team numerous times. 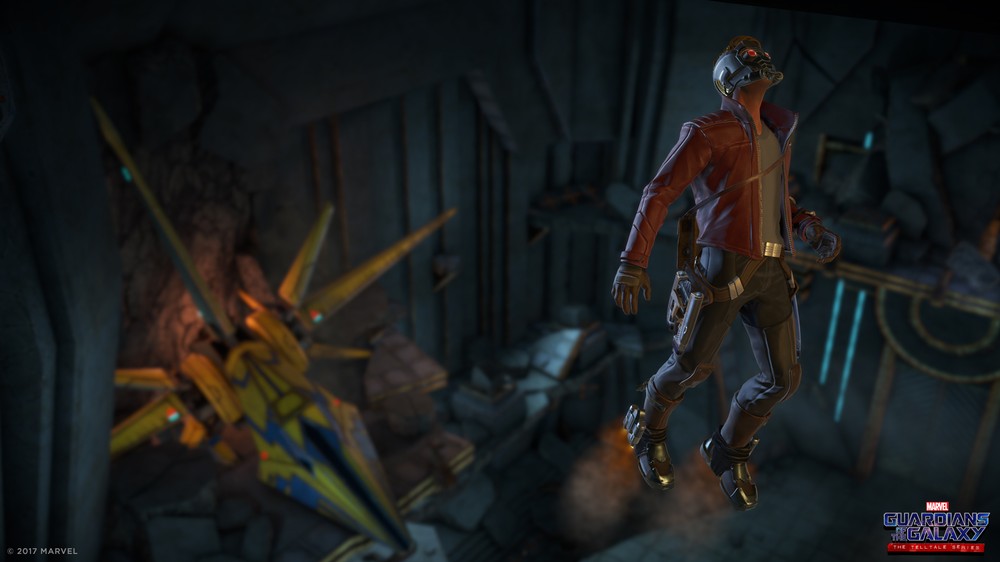 Telltale games promise a story that adapts to your choices but over the years and the various franchises we know that this is a fairly empty promise, and Guardians of the Galaxy does little to change that. Telltale has a story to tell and your choices might earn you some superficial ripples in the timeline but nothing major is going to change – even on some of the more obvious binary choices. About midpoint in the game I was totally torn between aligning myself with Nova Corps or making a deal with The Collector. I chose the Corps and then watched somebody else choose The Collector, and the differences were hardly worth the time I spent trying to decide. Even some of the dialogue options seem to force their own agenda, like when I choose to be silent and something is still said to progress the conversation. I’m still waiting for my dialogue and choices to really make a significant impact on the story.

I was blown away by the graphics. Normally we get this flat, cel-shaded style but Guardians showcases some vibrant colors and photorealistic textures like skin and clothing. There is also a shininess to objects now with great use of lighting and shadows. The 3D environments are simple and easy to navigate with not much to get hung up on, but there is an obvious limitation when it comes to what you can interact with.  I’d like to be able to click on more stuff, even if it only prompts a brief description. 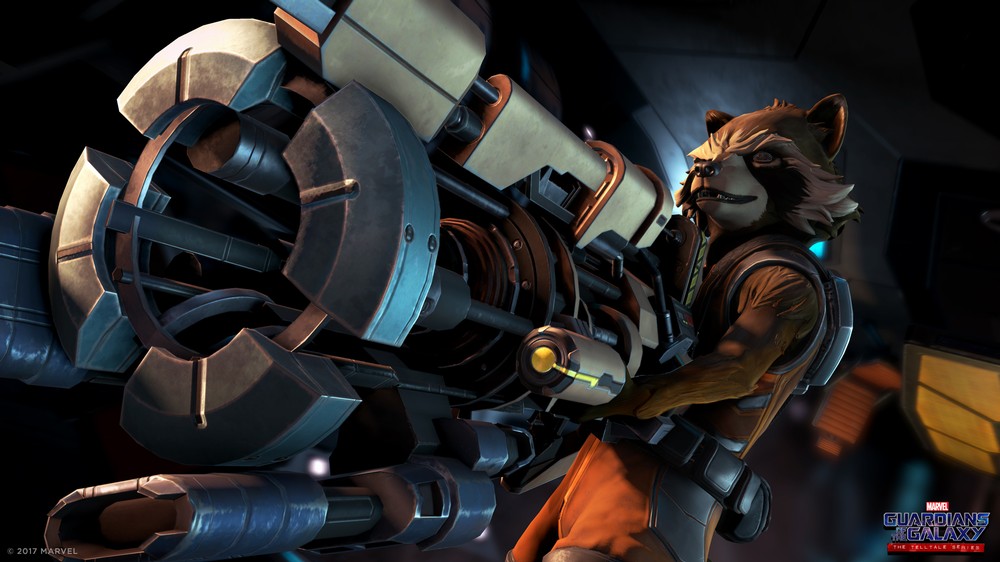 The Guardians of the Galaxy movie has one of the best soundtracks of recent years, and Telltale does an admirable job capturing that flavor with some great tunes by E.L.O and Hall and Oates. There is plenty of other great music as well, but those two standout, as does the fantastic sound effects and the aforementioned ensemble cast of amazing voice actors.

“Tangled Up in Blue” clocks in at roughly 90 minutes, which is pretty short, even by Telltale standards; especially for an opening episode that is supposed to hook you for the next four. Personally, I only play each episode once; at least until I finish the entire season, just to preserve the integrity of my decisions, but for those wanting to explore every story tangent you’ll need to play at least 3-4 times to see every animated story path and hear every bit of recorded dialogue. All trophies and achievements can be earned in a single pass.

Despite its usually shortcomings, Marvel’s Guardians of the Galaxy: The Telltale Series is easily in my top three favorite adventure games with Wolf Among Us and Tales from the Borderlands being the other two. I can only hope the rest of the season can live up to the excitement and suspense this opening episode has generated. 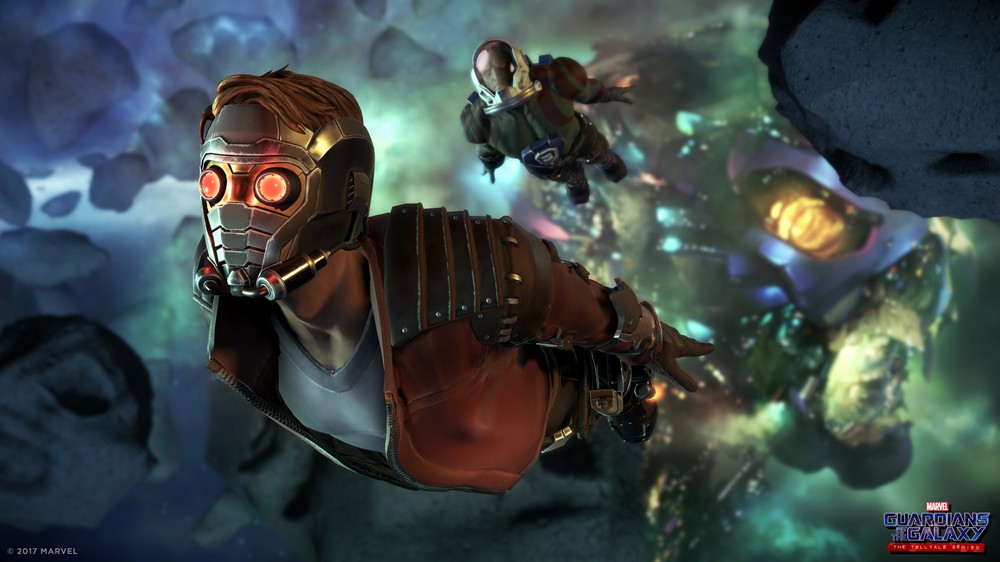 Now that Telltale’s Guardians of the Galaxy game has delivered their final chapter we can finally take a step back and view this epic space saga as a whole. I can certainly say it has been one wild ride with more peaks and valleys in story pacing and action than any other Telltale adventure of late. Some of the middle episodes really dragged on, but when those action QTE moments kicked in they were some of the best and most engaging experiences next to the Batman franchise.

Consistent across all the episodes was a new standard in artistic mastery. The character and set designs were flawless and the textures stood up to the closest scrutiny on a 75” 4K screen; especially the porous skin of Drax. Alien worlds and space sequences were inspired, and each new episode delivered something new for the eyes and the ears, as new legendary licensed songs from Peter’s Earthly timeline wove their way into an already film-worthy score.

One thing Guardians of the Galaxy had going for it was interpersonal relationships.   While other Telltale games may have asked you to balance yourself with one or two other characters, this time you were continuously trying to keep the peace with four characters, which was nearly impossible since siding with one often meant alienating another. I enjoyed the ending status screen that showed your relationship status with your crew in raw numbers. 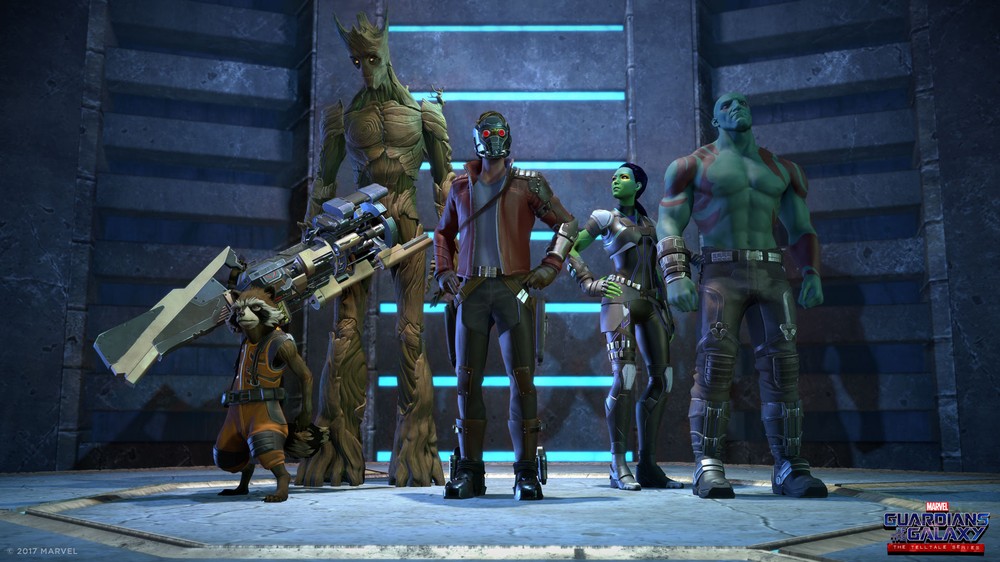 Another element I really enjoyed about this series is how each character got their own major moment to shine, as we got to explore the rich backstories for Rocket, Drax, Gamora, and even Groot. Mantis turned out to be one of my favorite new characters, and I really want to know how she ends up with Ego, assuming this game shares the same timeline as the films. The post credit stats also provide lots of data on your choices and how they impacted the game and the characters, giving the game a superficial incentive to possibly replay differently in the future.

Guardians of the Galaxy does a better job than most Telltale adventures in providing the illusion of choice, but even when paths appear to diverge you always end up at the same destination. The game does track all your major choices, which subtly alters future conflicts in the game, but more often than not simple serve as plot points that are read back to you to prove the game was “watching”. There is one encounter with Drax near the end of the game where he throws a lot of your choices back in your face and you must talk your way out of a desperate situation.

I was impressed with just how much emotion they managed to coax out of the ending given the rather binary final decision, and I have to wonder what the 23% were thinking that didn’t make the same choice as I did. Why did you play the game? I do have to say I think this game will play out better as a binge title. Spread across seven months, Guardians of the Galaxy lost momentum and even a bit of appeal, but when played back to back should prove to be a non-stop thrill ride full of exciting reflex-testing action and thoughtful dialogue trees…and even trees who have dialogue.

1
1139
The Walking Dead: Saints & Sinners Review – Oculus Quest
2
984
The Falconeer First-Look Preview – PC
3
984
Metamorphosis is 33% Off on Steam!
4
984
Werewolf: The Apocalypse – Heart of the Forest launches on October the 13th
5
984
Synth Riders Celebrates Anniversary with a Month Full of Treats and an Oculus Ques...
6
984
Worm Jazz Review – PC
7
983
Frictional Games Shows Off First Gameplay Footage of Amnesia: Rebirth
8
983
Join the Galaxy’s Finest as Star Wars™: Squadrons Soars Into Homes Today
9
983
Take to the Skies and Choose a Side in the New Trailer for Next Generation Air Com...
10
983
CRASH BANDICOOT 4: IT’S ABOUT TIME IS AVAILABLE NOW
All Original Content on Game Chronicles is Copyright (c) 2002-2020
Sinjin Solves Walkthroughs Copyright (c) 1996-2020 by Mark Smith