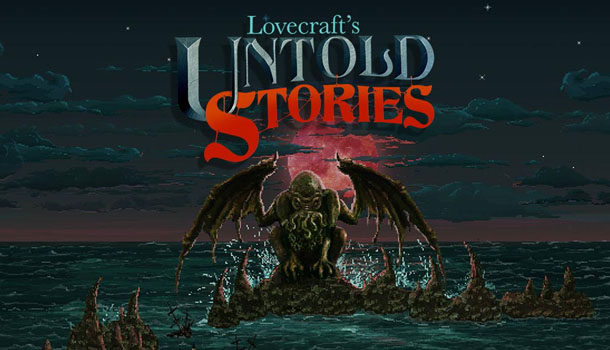 - Some weapons make game rather easy at time
- Enemies are troublesome at times
- Oh god, the Penguins!

Lots of fun for fans of Lovecraftian lore and roguelike gameplay.

It would seem that the cosmos is aligning when it comes to eldritch works as of late. Over the past several months I’ve had the opportunity to experience several different genres all focused on some aspect of H.P. Lovecraft’s lasting works. Like me, many who are already interested in Lovecraft already know the stories told from the author’s narrative views. But with every great literary creation there are always other stories to be found. With that in mind I submit for your perusal my experiences with the newly released PC title Lovecraft’s Untold Stories by developer Blini Games.

In Lovecraft’s Untold Stories, you start out playing as a private detective that arrives at a Victorian mansion after a request from a former colleague. While this sounds remarkably familiar to the start of more than a couple Lovecraftian games I assure you there are other tales woven into this adventure. There are four other playable characters: a professor, witch, thief and ghoul that you will find throughout your adventures. It is important to note that you will not encounter them all in one playthrough as each character’s story will take you to different locales. For example the detective will only find the professor within the first two levels of his campaign. 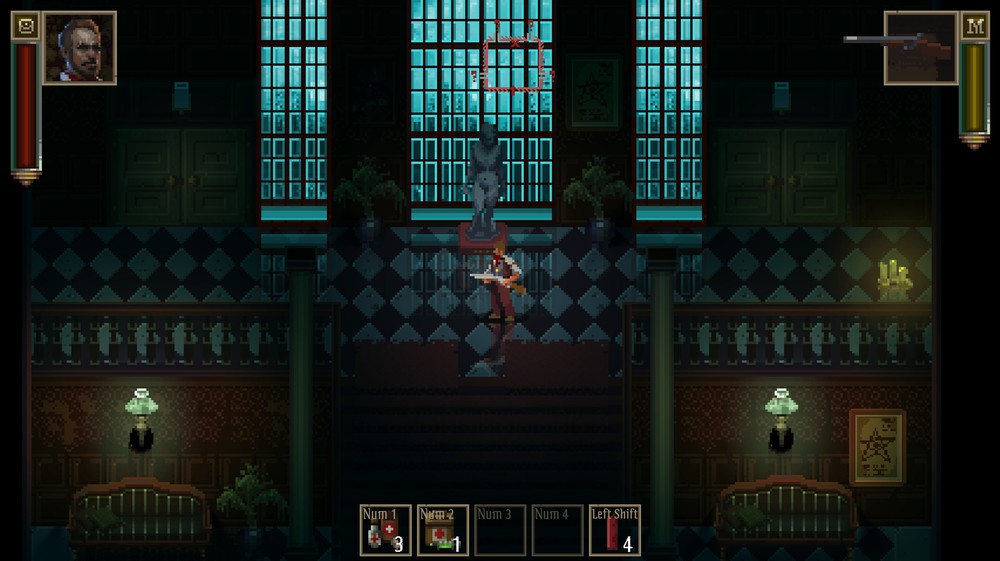 Getting to them as well as bringing each character’s story to their conclusions however is another story entirely. Combat makes up a good part of the experience outside of exploration so there are two main ways to play each with their own benefits. To start I choose to go with the more traditional keyboard and mouse approach which works well for character and menu inputs. The biggest thing that I had to learn quickly is that unlike other directional based shooters your shots and other items such as dynamites are based upon the location of your mouse cursor.

The other option is using a controller which actually alters the gunplay a bit but surprisingly for the better. In controller mode the game turns into more of a twin stick shooter where just aiming with the right sticks fires shots or abilities continuously. You just have to account for the shot count on each weapon to keep from ending up food for a Shoggoth amongst other things. The right trigger performs a skill specific to the character but at the cost of stamina like the professor’s force field. Menu navigation take a little practice as long as long as you memorize the button inputs. I only say memorize since the game in no way pauses when in menus, so quicks inputs or only accessing them when it’s safe is the best options. 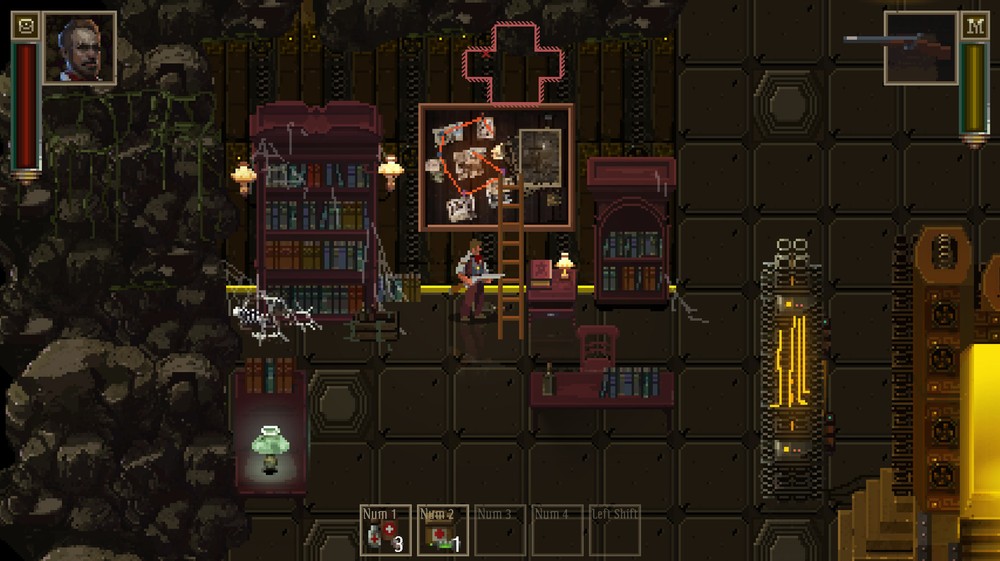 The one thing that I often enjoy about most Lovecraftian games is their attention to the lore. Any good title that features this lore as far as I’m concerned should feature several key things. Foremost is the insanity aspect with I find to be a major cornerstone for the Mythos lore. Through your adventures you can interact with several objects that depending on your choices will have an effect on your state of mind for better but more often for worse. There are items such as chocolate that can offset these maddening experiences but if things get really bad well its game over man. While your characters can off themselves, though I’m really curious how one character in particular pulls that off, it’s not permadeath but rather you start back in the Strange Place or at the beginning of the current level.

While insanity may kill you it’s much more likely that cultists, zombies, slimes and even monstrous packs of Shoggoths will. Then there are environmental dangers such as electricity and acid to contend with. There are items that will help protect you from some of them but depending on the levels and difficulty this may be trickier than that sounds. Each level that you encounter is randomly generated each time so one time chest locations and interaction points be harder to get to. The levels also depend upon which character you are playing with. 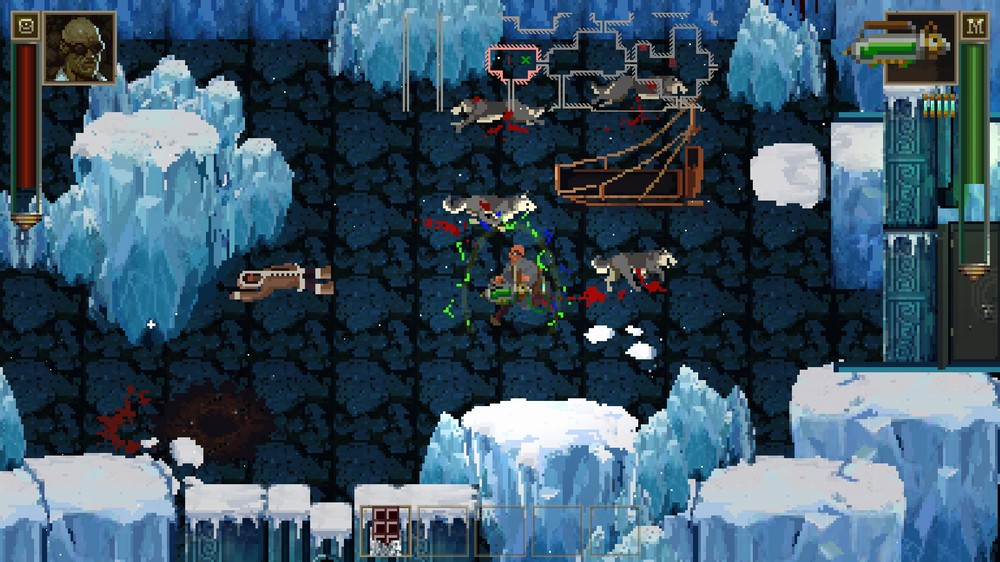 Each set of locations that you experience are inspired by actual stories in the Lovecraft Mythos. Places such as Antarctica, jungles, a hospital and even a coastal port city are all major locales in many of my favorite stories. If you work exceptional hard you will uncover items required to open portals to take on the Great Old Ones themselves. Yeah you read that right. You actually get the chance to take on Azathoth, Shub-Niggurath, Nyarlathotep, Dagon and the Great Cthulhu himself in special sublevels. Finally I find a game that actually allows me to take on these entities instead of preventing their summoning on our world.

You do all of this in eerily designed locations that instill dread even in the lightest of areas. Everything is presented in a retro graphical design that features great lighting and atmospheric effects like lighting and rain. They even pulled off real-time reflections in tile floors. Each character has a window of light around them that helps navigate traps and dark locations. But what I love the most is the monsters and all the little details that make this title the nightmare-scape that it is.

I have to say I wasn’t quite sure what to expect going into this roguelike experience. Personally rogue style games aren’t exactly my strongest suite but there was just something about Lovecraft’s Untold Stories that just clicked. Maybe it is the various character abilities or the maddening visuals and locales. I’m a big fan of the Cthulhu Mythos and Lovecraft’s work in general so ultimately I think it was the creatures, bosses and investigation elements along with the combat that ultimately sold me. So if you enjoy Lovecraftian lore and roguelike gameplay then you should check out Lovecraft’s Untold Stories for PC today. 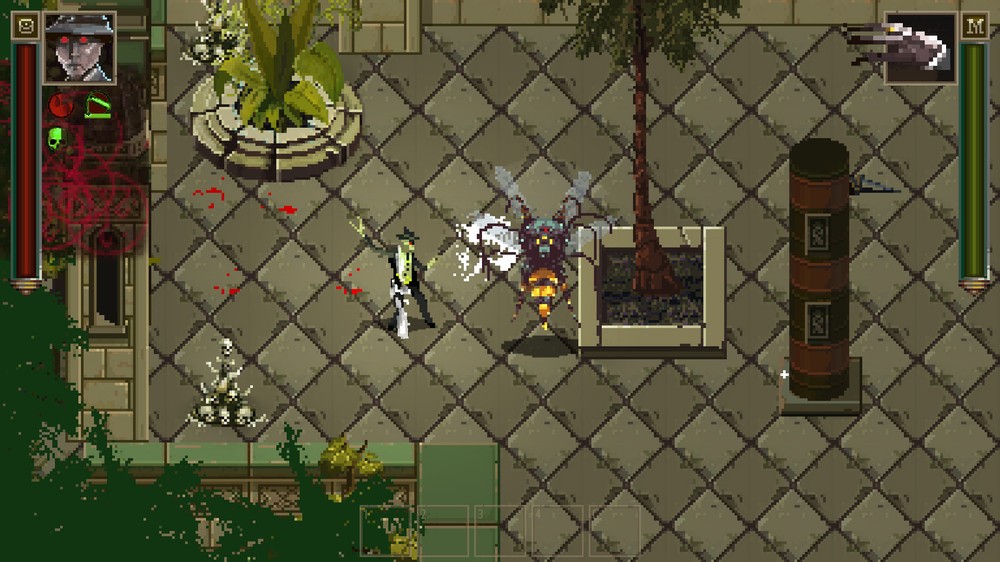 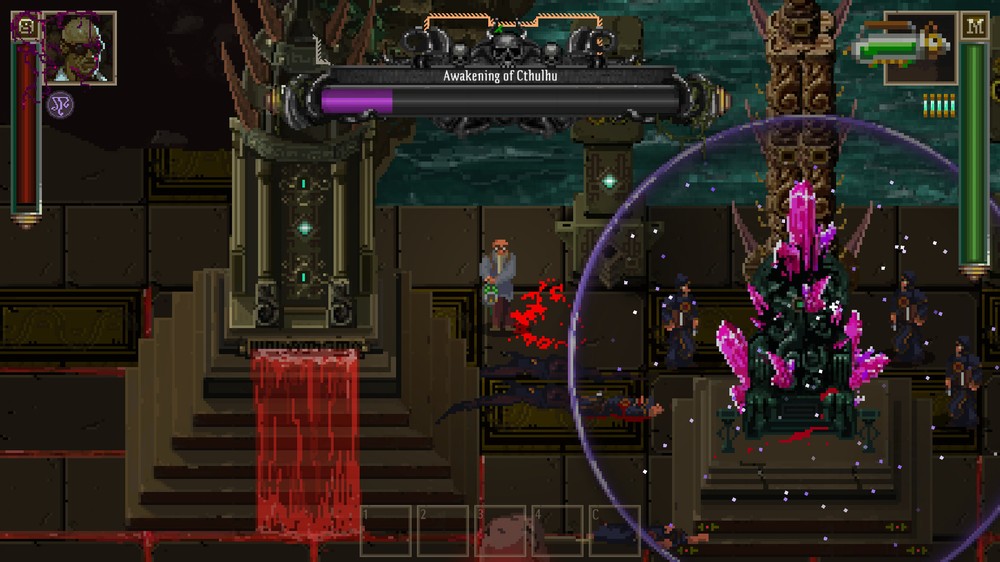 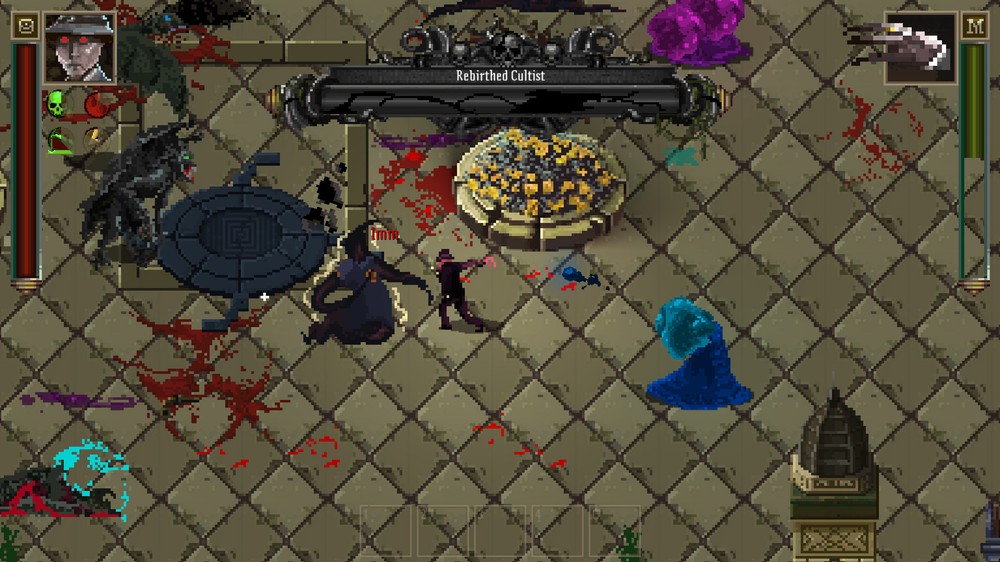 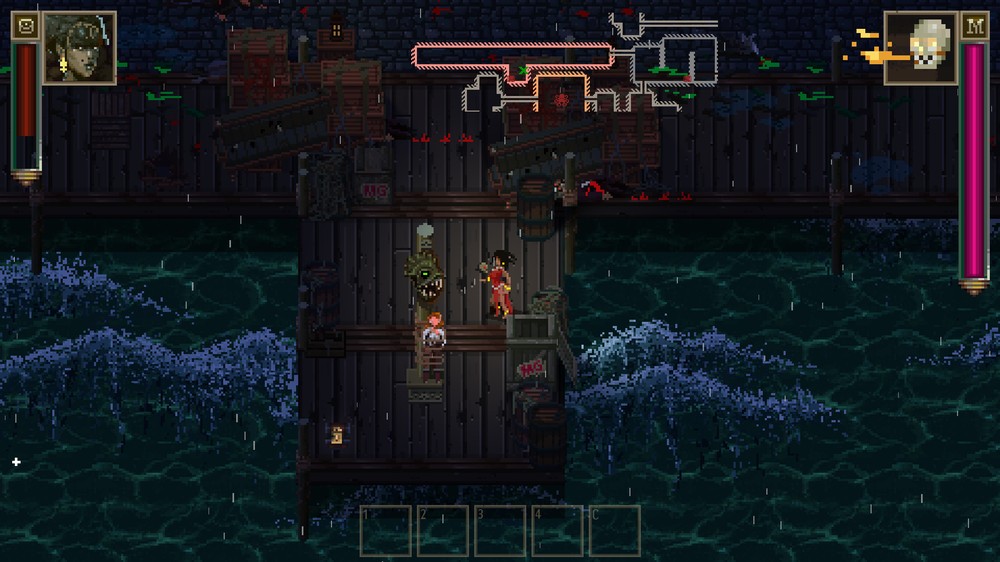 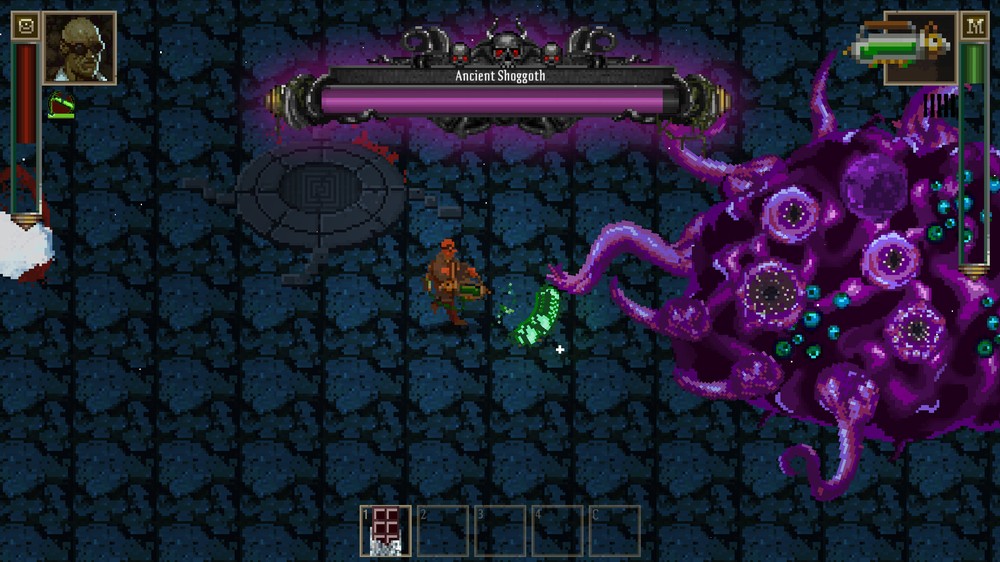 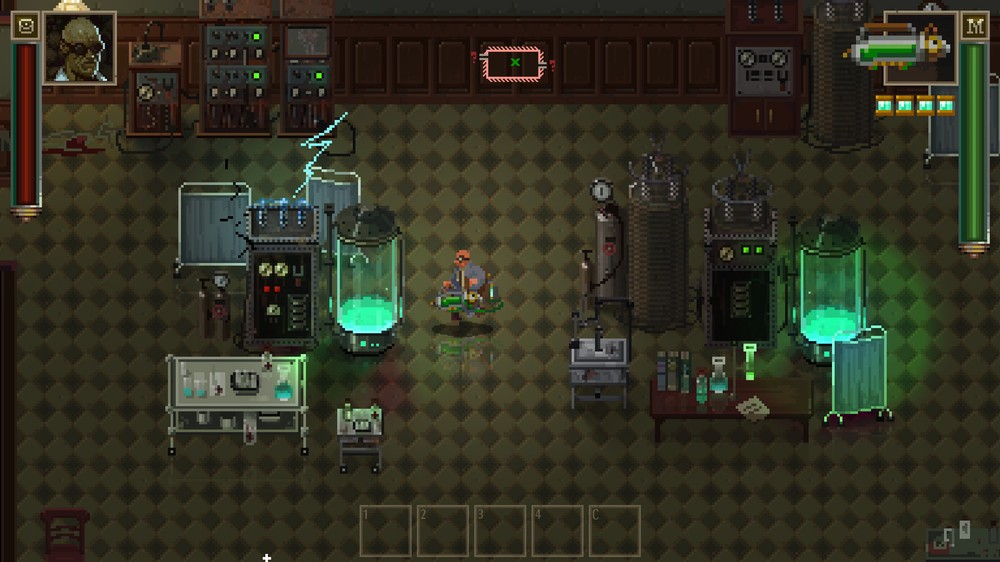