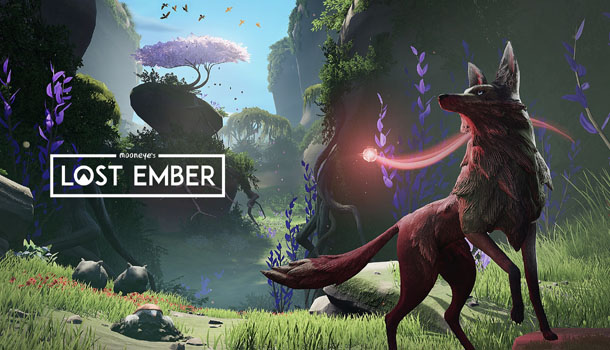 A novel experience that balances the technical shortcomings.

I’ve played a number of games with a heavy subject matter recently, so that fact that Lost Ember came along when it did was a welcome respite. This isn’t an attempt to reduce Lost Ember to a mere palate cleanser as it contains more substance than that description allows, but I did find that I could start playing Lost Ember and soon relax into its lush, colorful world. Coming from German developer Mooneye Studios, Lost Ember explores the themes of life, death, choice and consequence, all while celebrating the natural world and the diversity of animal life.

You play through Lost Ember as the spirit of Kalani, a young woman from the Yanran tribe who has died, but whose spirit has returned in the form of a wolf. Joined by a floating red orb that guides her through the world, Kalani attempts to explore the memories of her life to see why she hasn’t been granted entry to the City of Light, Lost Ember’s interpretation of the afterlife. Along the way, Kalani is able to transfer her spirit into other animals, meaning that you’ll be playing as a variety of creatures, from rodents and reptiles to birds and fish. 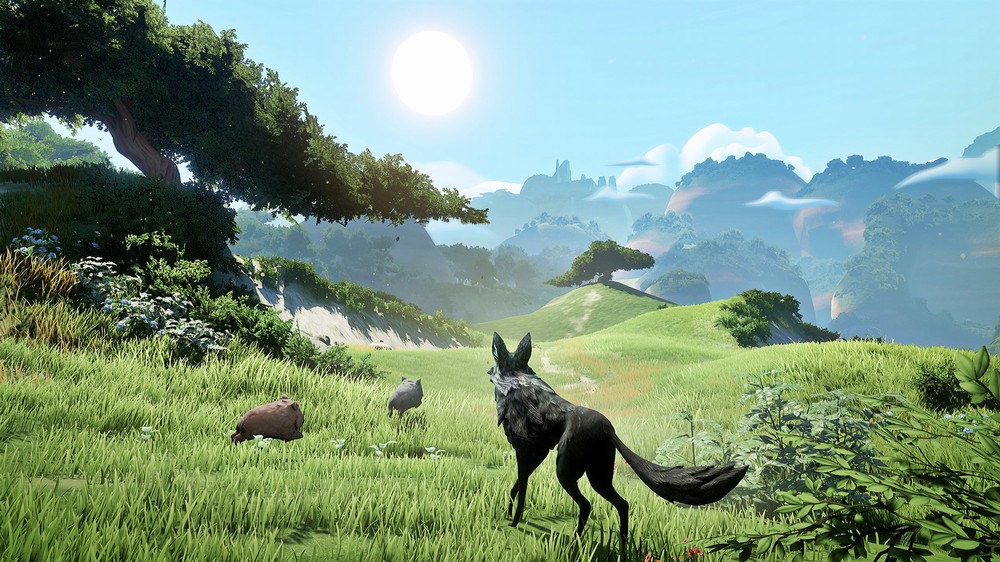 Lost Ember is a fairly linear experience, and although there are more open areas that you can spend time exploring, these serve as diversions from the main path, rather than alternatives to it. By exploring, you can discover relics and other collectibles, though these don’t seem to serve any larger purpose than adding to a counter of how many you’ve seen. The more compelling reason to explore is to discover extra memories from Kalani’s life, as these add further detail to the world and can help you understand the struggles of her life and why her spirit is where it is now. On multiple occasions, you will enter an area where the exit is blocked until you’ve viewed the necessary memories to progress, and while uncovering these memories isn’t especially difficult, these artificial barriers allow you to understand that this is an area worth exploring and spending some time in.

Unfortunately, Kalani’s story isn’t all that interesting, and actually feels fairly par for the course for a game of this type. There’s an interesting exploration of a tribal class system, and the world helps to build a sense of a series of locations that feel once lived in, but as the credits rolled I was well aware that this wasn’t a tale that was going to stay with me for very long. The majority of my motivation for progressing through the game came from the world itself and the mechanics of the game, as you explore some lush environments while taking control of some interesting and varied creatures. Though the world doesn’t always hold up well on the Nintendo Switch, I was able to overlook a number of the technical issues purely on the strength of the novelty of the experience. 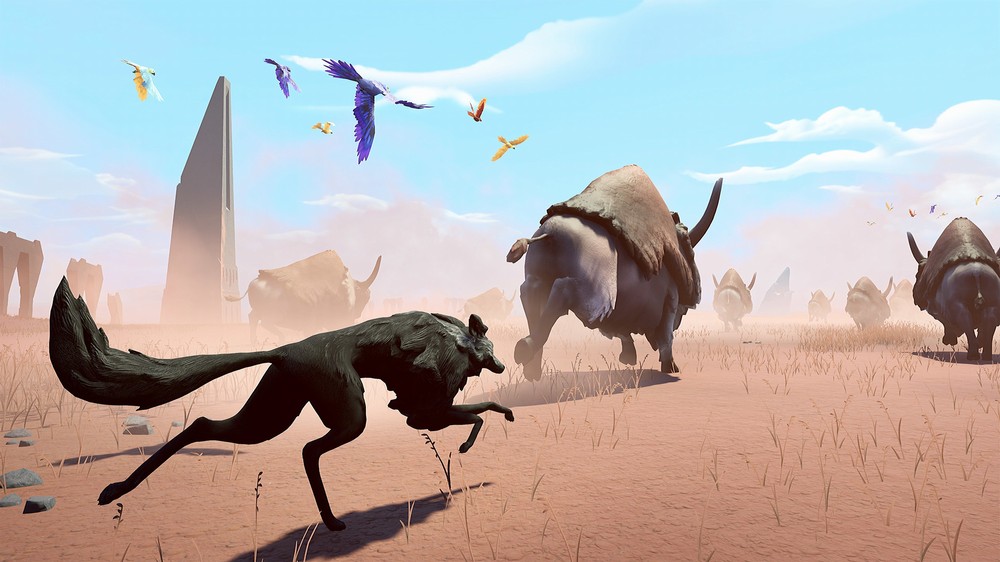 Lost Ember introduces the ability to switch animals in a simple manner, as you are asked to take over a small rodent-like creature in order to get through a small tunnel that your wolf form is too large to enter. Within a short while, though, you’ll be soaring through the air as a bird, jumping up a series of rapids as a fish, and scaling steep slopes as a mountain goat. While you often return to your wolf form fairly rapidly, and your animal alternatives are usually used to overcome a single obstacle, this frequent switching helps to keep the experience feeling fresh, and there’s enough of a variety of creatures and abilities that the experience is allowed to grow and develop as Lost Ember progresses.

While I was largely able to overlook the technical issues present within Lost Ember due to the novelty of the experience, it would be remiss of me to not mention them, as they are quite prevalent and also quite frequent in their occurrence. Firstly, and most common of all, Lost Ember hangs quite noticeably when moving from one area to another, with the game visibly freezing for a couple of seconds as it loads. This is compounded by the fact that although Lost Ember looks beautiful conceptually, the actual visuals on Nintendo Switch are quite rough, with pixelated textures and a camera that has a habit of clipping through the borders of the world to show you the construction of each level. On top of this, I had a couple of instances of the game requiring a restart, one that fully locked up my console and required a full restart, and one where a bird that I had taken control of T-posed mid-air and plummeted into oblivion. 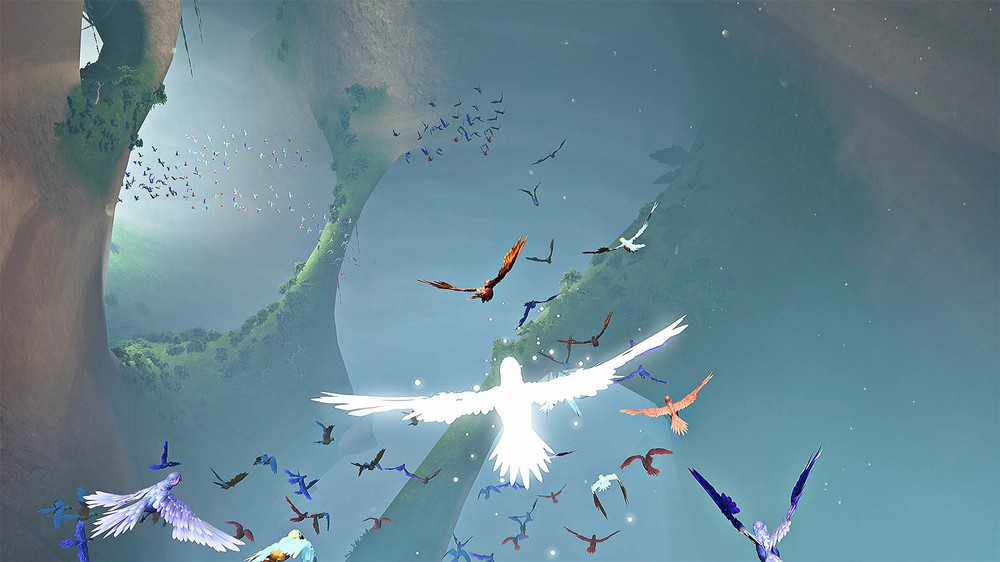 In a title like Lost Ember, I feel as though I can forgive these issues a little more than with some other titles, purely because it feels like this game has been developed with a degree of earnestness that isn’t always seen in the gaming medium. It also helps that a number of the mechanics on show here are quite unique, which means that even if they don’t always come off successfully 100% of the time, I can still appreciate the effort in trying to do something different. This doesn’t mean that the issues can be entirely swept aside, but it does mean that they can be forgiven a little more when trying to consider if Lost Ember is worth recommending to potential players.

Overall, I did enjoy my time with Lost Ember, and the fact that I finished its roughly four to five-hour narrative in only two sittings means that it must have been doing something right to stop my attention from drifting. However, I can’t recommend the game without mentioning the technical issues that are too common to ignore, and that give the feeling that the game is loosely stitched together and ready to fall apart at a moment’s notice. This is the kind of title that feels better as an example of a mechanical demonstration rather than a successful narrative experience, but there’s definitely something here to enjoy if you can overlook the shortcomings. 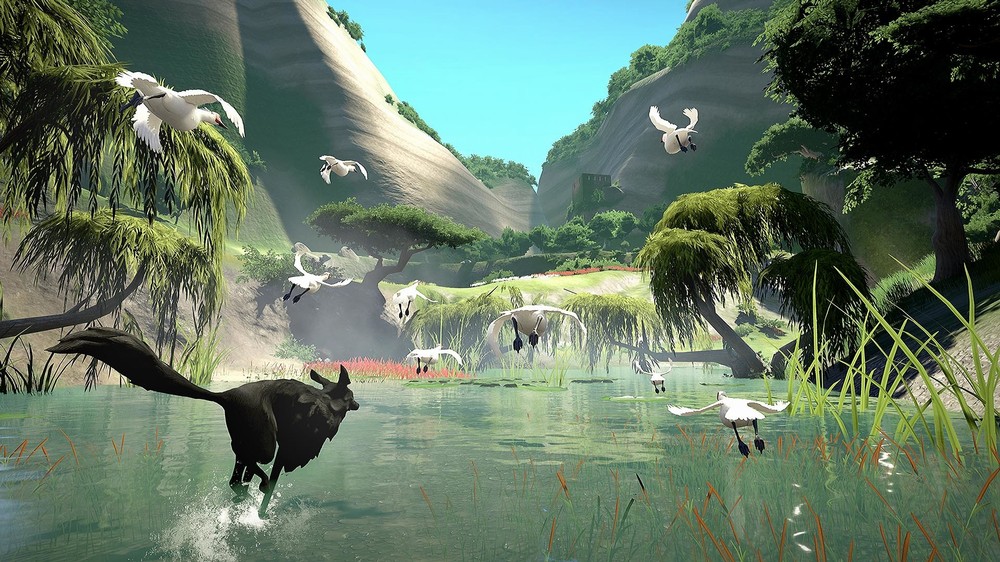 1
836
The Walking Dead: Saints & Sinners Review – Oculus Quest
2
738
Werewolf: The Apocalypse – Heart of the Forest launches on October the 13th
3
738
Worm Jazz Review – PC
4
737
Frictional Games Shows Off First Gameplay Footage of Amnesia: Rebirth
5
737
Join the Galaxy’s Finest as Star Wars™: Squadrons Soars Into Homes Today
6
737
The Falconeer First-Look Preview – PC
7
737
Metamorphosis is 33% Off on Steam!
8
737
Synth Riders Celebrates Anniversary with a Month Full of Treats and an Oculus Ques...
9
737
Take to the Skies and Choose a Side in the New Trailer for Next Generation Air Com...
10
737
CRASH BANDICOOT 4: IT’S ABOUT TIME IS AVAILABLE NOW
All Original Content on Game Chronicles is Copyright (c) 2002-2020
Sinjin Solves Walkthroughs Copyright (c) 1996-2020 by Mark Smith