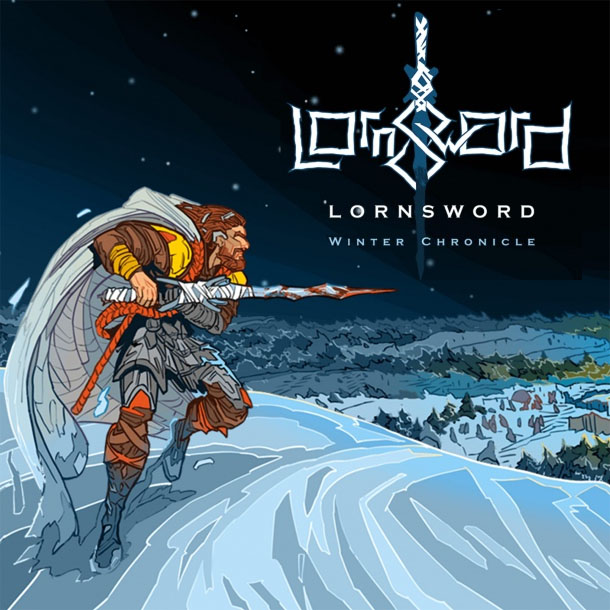 Recently released on Steam Early Access, Lornsword Winter Chronicle definitely scratches an itch I’ve been having with the current crop of RTS and tower defense games. This action-strategy game blends several sub-genres together and even manages to weave in a compelling narrative to tie all the missions together into a cohesive campaign that continually evolves with your character.

The game starts off charming enough with some stylish graphic novel cutscenes featuring above-average voice acting. You’ll meet the Captain and learn a bit about his family life as well as his loyal service to the Lorn Empire. Lornsword offers the perfect amount of in-game tutorials to get you going, and descriptive pop-up boxes provide refresher hints for units and game commands later on. The game slowly builds at a comfortable learning curve so you can easily adapt to new structure types and the clever nuances to automating units or taking direct control. 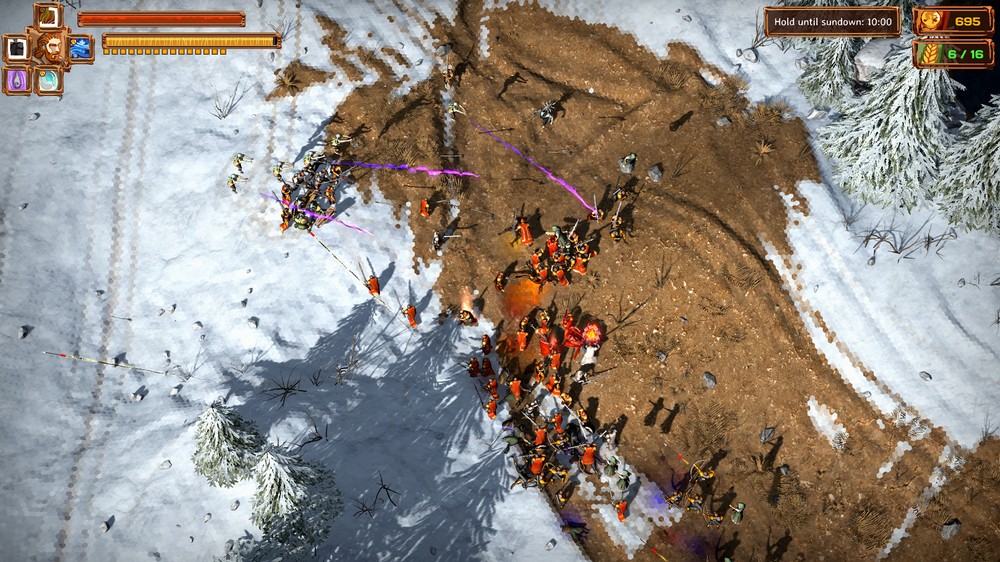 Lornsword is a clever mix of standard tower defense, resource management, and strategically deploying individual units to attack other soldiers or enemy structures. There were moments that reminded me of the classic Command & Conquer, only this game offers you more direct control. There is a clever balancing act in building structures and organizing your troops to both defend your own base as well as maintaining a formidable army to attack the enemy’s base. You’ll build structures like Keeps, Guard Towers, and Scout Camps, each with a specific purpose in maintaining that balance of power. These units can be upgraded further for more advanced abilities.

Some structures allow you to setup certain variables including a default deployment direction. These bases have a black or orange flag that determines if freshly spawned troops either stick around to defend the home base or automatically march toward an enemy following the waypoint flags that were determined when you built the structure. Even cooler is the ability to take direct control over these units with your captain, which moves about the battlefield under your direct control. You can simply run by a group of soldiers and hold down RT to “attract” them into formation and manually steer them toward a group of enemy soldiers or a structure you want to tear down. Then hold LT and they will all break off from your lead and attack the nearest enemy. 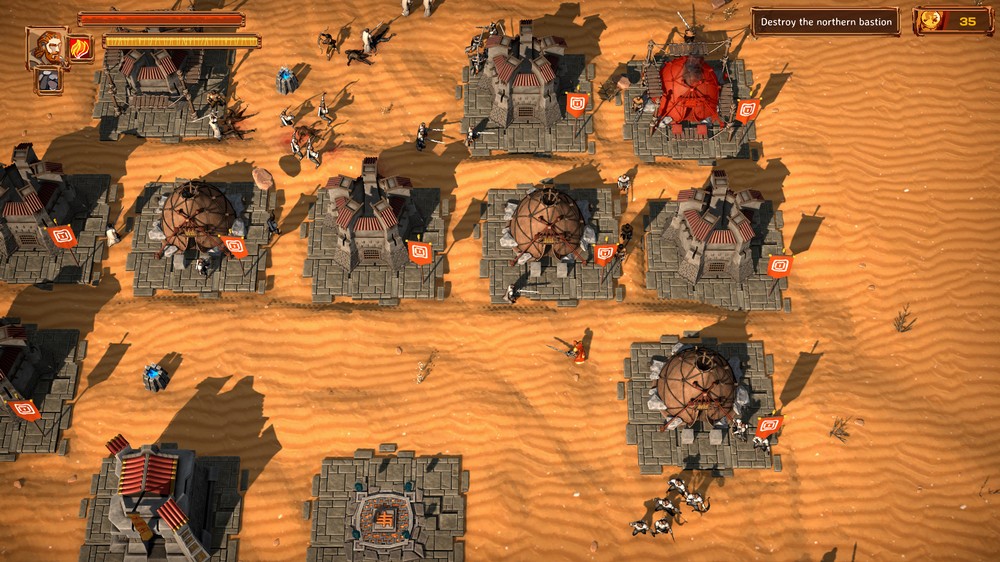 To support your troops the captain also has the ability to command certain elemental beings; fire, wind, earth, water that will materialize on the battlefield for a short duration of bonus attack power and damage along with some fancy special effects. These four elements are assigned to the d-pad with icons to show the power and the cool down timer for each.   Summoning these elementals requires stamina which is gauged with its own meter that depletes when you run or summon, but can be refreshed by absorbing elemental crystals located on the shrines in your home base.  Additionally, your captain has a health meter that can be restored simply by standing on any elemental shrine.

Another clever mechanic is the First Sight ability that allows you to pan around the entire map and check out any activities in areas that are occupied by your troops. This comes in handy when you are simultaneously defending two or more bases from waves of invaders. Pop-up indicators indicate a threat and you can use the right stick to quickly zip over to the conflict area and see what’s going on and if you’ll need to provide backup.  There was one instance where I had four soldiers guarding a tower and when I panned over the area I saw at least a dozen enemy soldiers sneaking up on them through the forest.  I managed to get there just in time and unleash my fire elementals. 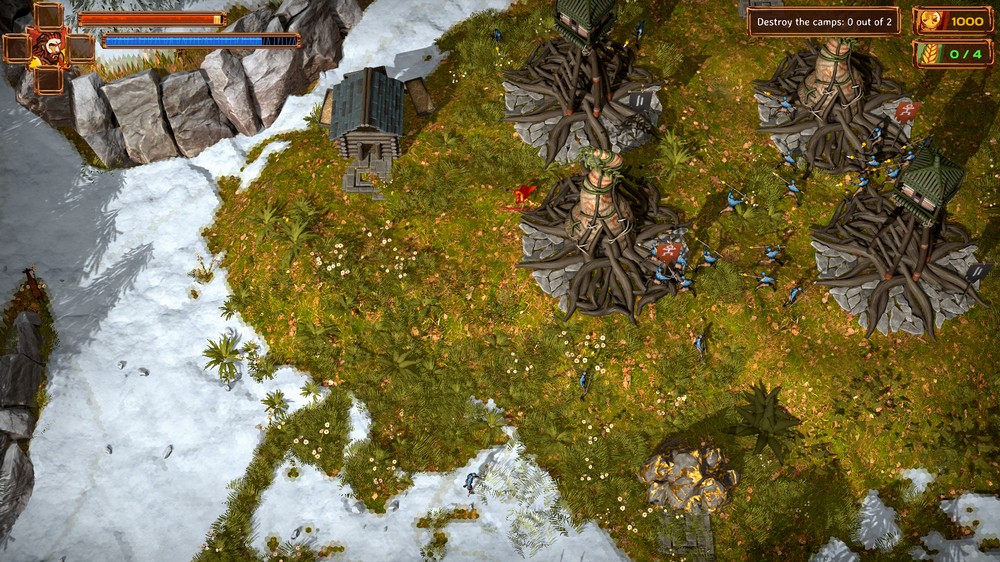 Lornsword Winter Chronicle is a very challenging and satisfying game, even in this early stage of development. While I don’t particularly enjoy any of these sub-genres separately, Tower Five has managed to combine them into something original and entertaining. The mix of building up my own base units and leading troops into battle always keeps things fresh, and the ability to summon powerful elemental units and even engage in direct combat using my captain was thrilling.  I also enjoyed the hard decision moments like taking all my troops into combat and leaving my home base defenseless, which quickly turned into a race of who could wipe out the other base first.

The presentation for Lornsword is equally as special with heavily stylized art panels complete with voice overs for the narrative sections, but then things tend to drag out on other lengthy interactions that play out one sentence at a time and require a button tap to advance. These seem to go on forever. Once in the game you are treated to some fantastic visuals showcasing awesome landscapes from a quasi-3D top-down perspective. The detailing, shadows, and lighting were excellent, and my only regret was that I couldn’t zoom closer to inspect the delightfully animated units. The audio package was fairly limited to combat noise and a fairly generic soundtrack that often dropped out leaving me in silence. 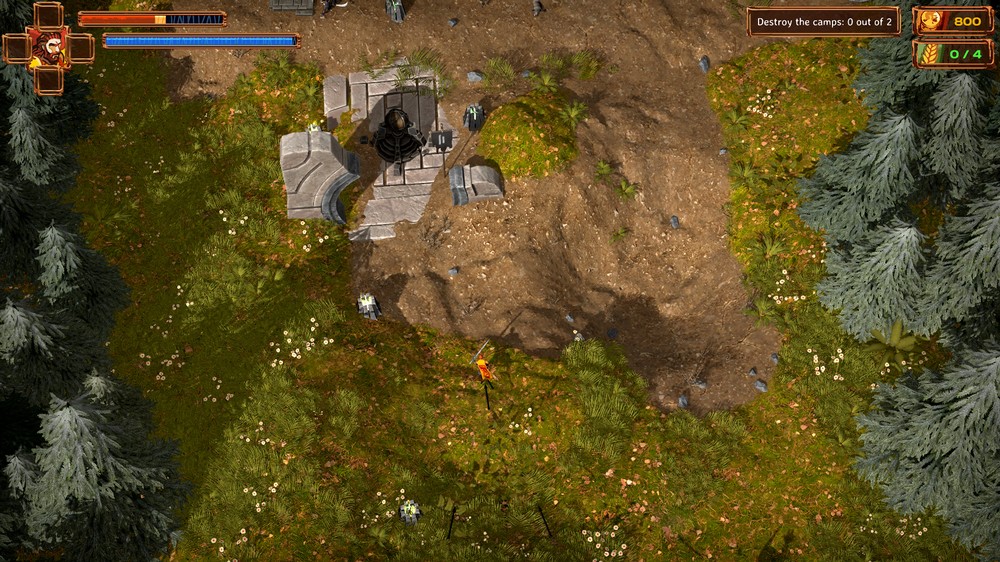 As indicated, this game is still in early access so we can certainly look forward to future updates, patches, and new mission content. I excited to see more fantasy landscapes that play a greater part in troop movement and tactics. Lornsword Winter Chronicle is in a great place for a work in progress and I can’t wait to see how it all ends up for final release. We’ll be back to update you when that happens, but for now, if you love a good interactive strategy game you definitely want to check this out.

It’s worth noting that Lornsword does support local co-op.  We didn’t have a chance to review that aspect of the game at this time, but we will certainly explore this in a future update along with any additional content that comes out before final release.