If you can't find $10 worth of fun with LocoCycle you probably shouldn't be gaming.

After it’s less than stellar debut on the Xbox One, LocoCycle is making the move to PC where I am happy to report that the game is just as much wacky stupid fun as it was on the console – and at half the price.  Twisted Pixel’s crazy combat cycle shooter always felt more like an indie game to me with its intentionally poorly acted FMV cutscenes (thought to be extinct since 1998) and its mindless button-mashing gameplay, so Steam is the perfect home and $10 is the perfect price.

LocoCycle has you playing as a sentient combat motorcycle for 4-6 hours of repetitive shooting and high-flying karate along with lots of reflex-testing QTE’s in one of the most “WTF am I playing games of recent memory.   The game opens up with a rather lengthy and poorly acted live-action cutscene (the curse of death in 90’s video games) that I can only hope was meant to be “that bad”.  They obviously spent some money on talent with actors like Robert Patrick, Freddy Rodriguez, Lisa Foiles, and Tom Savini, and those two custom motorcycle builds had to cost a pretty penny.

The premise is as shallow as the gameplay.  It seems a big weapons manufacturer has developed two combat-ready motorcycles – think KITT without the accent.  We have I.R.I.S. and S.P.I.K.E.; the former a sleek and sexy crotch-rocket with TRON-like lighting and the latter, a rough and ready chopper with chains and razorback spine.  I.R.I.S. gets zapped by a bolt of lightning and much like Johnny 5, is now alive, assuming you call a corrupted AI “alive”.  She is taken to Pablo, a stereotypical Spanish-speaking mechanic, for an overhaul.  After checking out a biker mag and seeing a commercial for an upcoming biker rally in Indiana, I.R.I.S. now has only one mission…get to Scottsburg, Indiana. 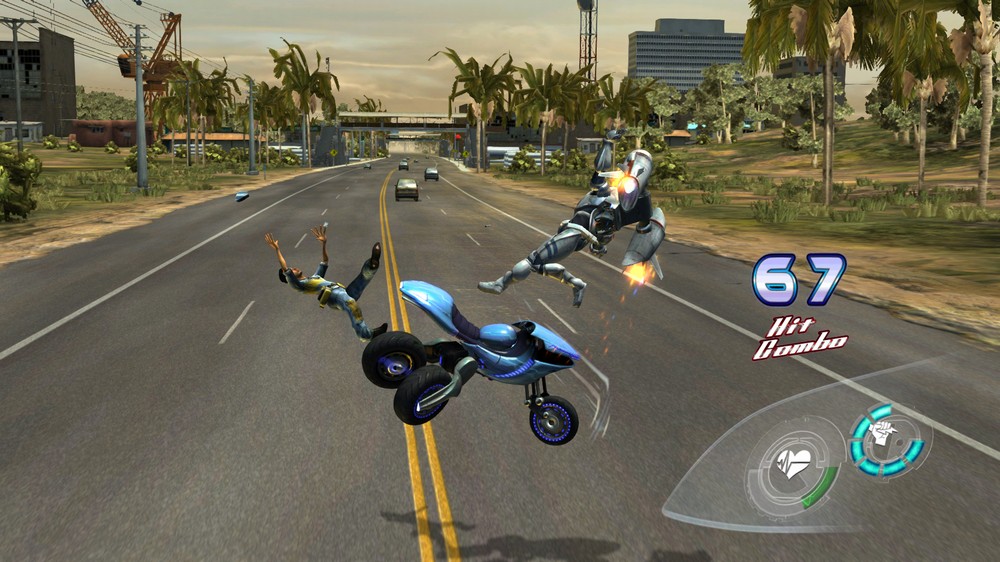 That is all the setup you get for the next several hours of non-stop chaos and mayhem.  Poor Pablo has gotten his pant leg stuck in I.R.I.S. so she is literally dragging him from Mexico to Indiana on his back.  The designers casually overlook the fact she would be dragging a fleshless skeleton before the end of the first stage, but any hints at realism were long ago forgotten in the pitch room at Twisted Pixel.  For as absurd the premise and mindlessly repetitive the gameplay, I still couldn’t help but fall in love with LocoCycle; even it if was only a weekend romance.

When you think of a combat motorcycle you think of guns and rockets and I.R.I.S. certainly has those, but most of her combat abilities are in her upgradable list of melee attacks – YES, melee attacks.   I.R.I.S. can leap off the asphalt and hold her own with Jet Li as she flips, kicks, and otherwise bashes her enemies into pulp.  Her unique design and twin set of rear tires act as legs and attacking merely requires you to mash the X button and occasionally watch for a yellow target that indicates an incoming attack, at which point you tap the A button to counter then resume your X bashing.   It’s a watered down version of the Batman combat engine, and it’s not that challenging to score triple-digit combos time and time again even before upgrading, which means you spend a lot of your drive time hovering in the air bouncing from one enemy to the next as traffic flows beneath you. 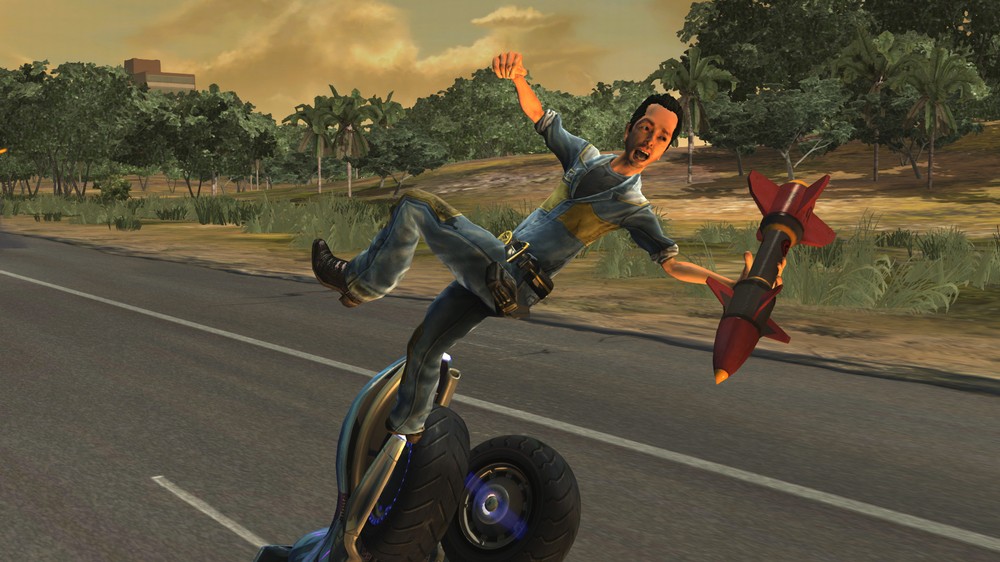 You can mix up the combat a bit when you factor in Pablo.  When he’s not being dragged at 200mph screaming in Spanish that I.R.I.S. continually mistranslates due to faulty circuitry she can throw him like a boomerang with the Y button.  Later, as you upgrade this ability he can bounce between up to five targets before returning.  And then you have the actually shooting parts of the game; easily the worst part since I.R.I.S. has some of the worst driving controls since Pole Position.   Her steering is way too twitchy so you end up bouncing off side rails or other cars.   Thankfully, a bumper upgrade will negate any collision damage, and your guns can be upgraded to widen the spread negating accuracy issues.  Once you get the rockets near the end of the game it is simply fire and forget.

LocoCycle is constantly mixing up the gameplay variety with waves of melee combat, shooting, endless QTE’s that involve buttons and stick movements, and even throwing in a dash of water craft combat and aerial bombing runs on a fleet of Navy ships.  I.R.I.S. can do it all, and when she isn’t kicking corrupt corporate butt she makes all sorts of great pop-culture references, recites movie quotes, and pines for the biker rally in Scottsburg, IN, which is only 145 miles from our office by the way.   I might have to check this out.

But the simple fact is that if you love dumb humor and dumb fun then you are going to love LocoCycle.  I always wanted to see the next live-action movie between each chapter, and even though the combat was mindlessly repetitive I was always trying to best my previous combo record.  There is also a modestly complex tech tree that lets you customize I.R.I.S. along the way with new abilities unlocking at each chapter, but you can pretty much max out the tree in a single game, so it’s not about choosing your skills as much as choosing the order you purchase them. 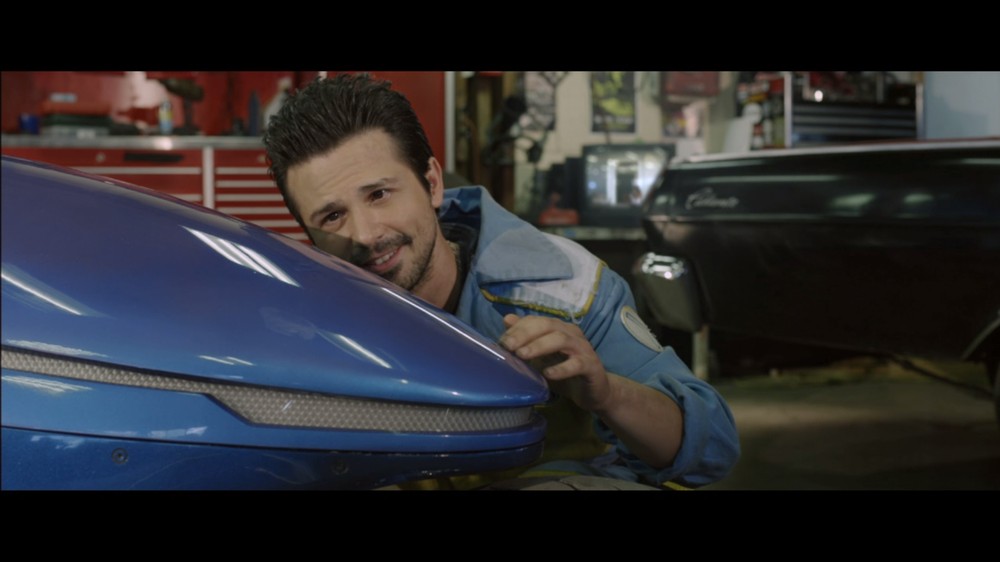 The presentation is all over the place.  The movies look like they were shot with consumer level cameras and the game’s graphics require only a modest video card and CPU.   Interestingly enough, if you play this on a high-end PC the game does look better and certainly loads faster than it ever did on the Xbox One.   The chapters change up the scenery going from south of the border to the southwest deserts, the bridge linking the Florida Keys, the Midwest, and even a final aerial boss fight over the city of Chicago.  The animations are fast and fluid with fun Matrix-style slow-motion moments.  I love the variety of cameras and game types, and the dialogue was hilarious.  Spanish-speaking gamers are going to have a much better time since they will be able to understand everything Pablo is saying.  Yes, they do have subtitles but you can never take your eyes off the gameplay long enough to read them.

LocoCycle may have been a joke on the Xbox One, but as a $10 budget title on Steam it’s one of the most absurdly delightful and silly combat driving games you are likely to play in this or any lifetime.

And for those interested, the Rebel Yell biker rally in Scottsburg, IN is in September.  See you there. 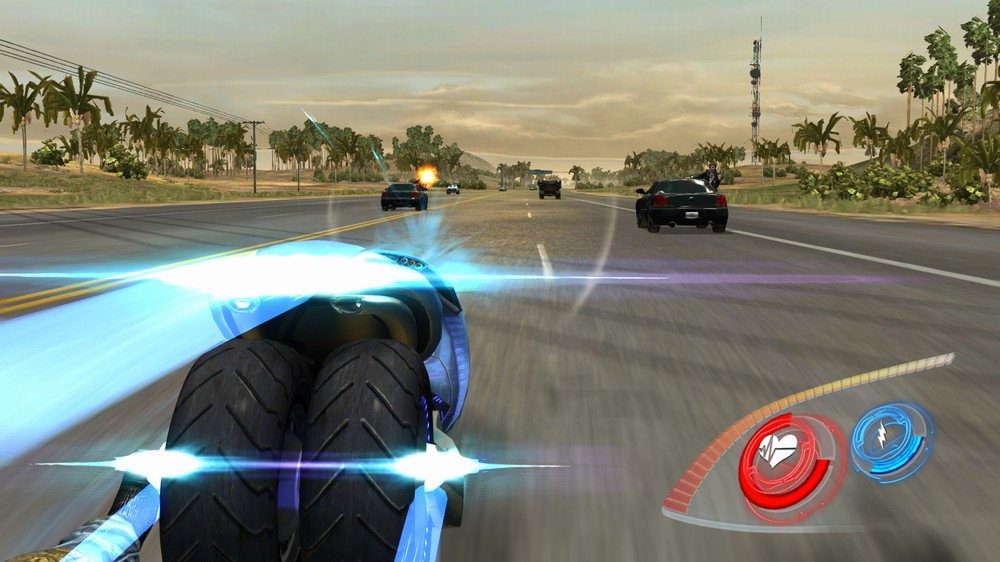 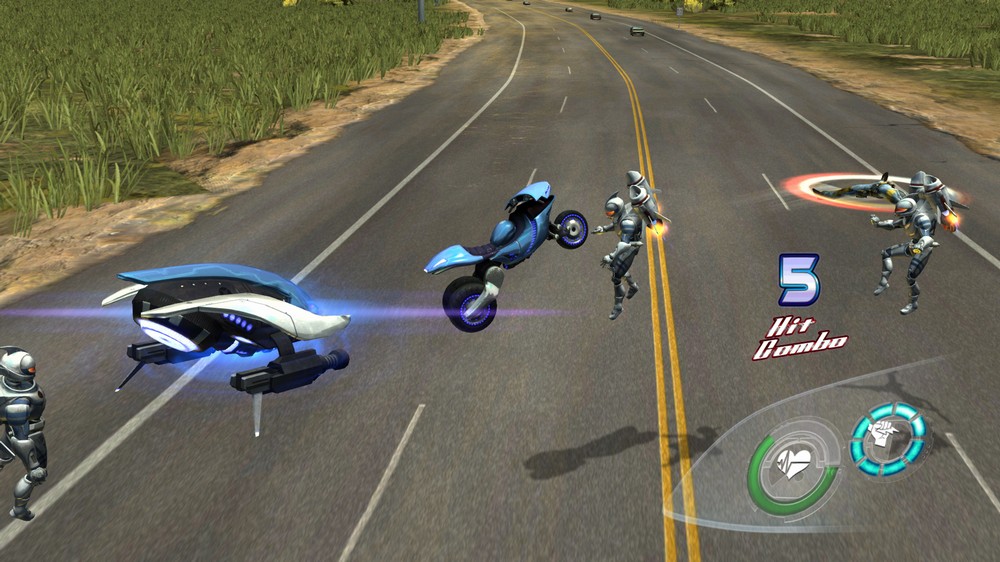 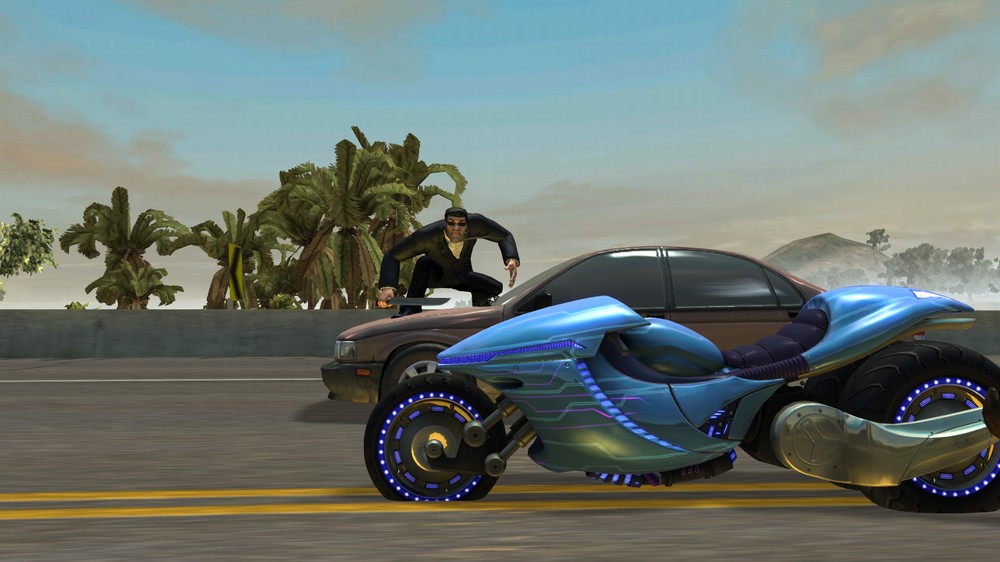 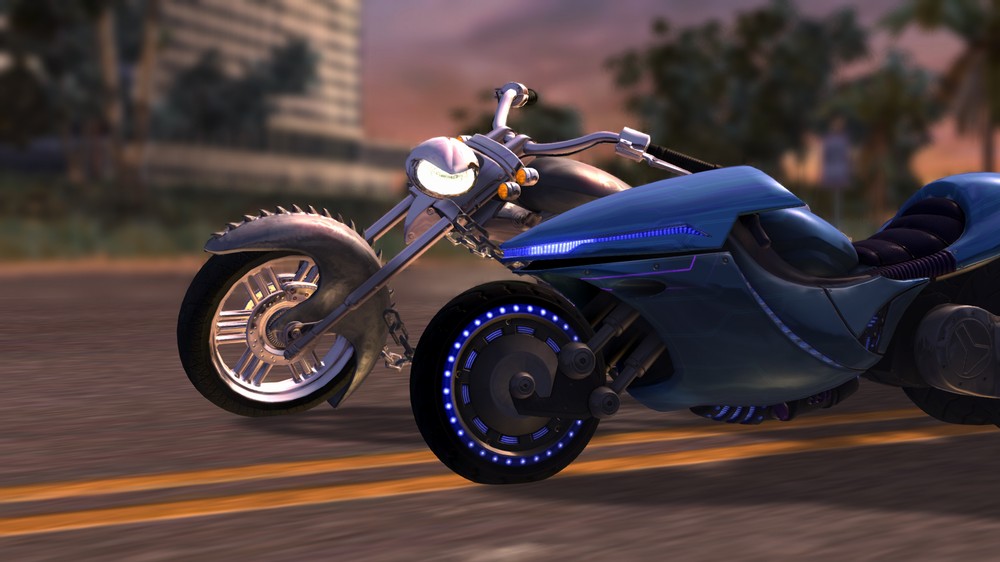 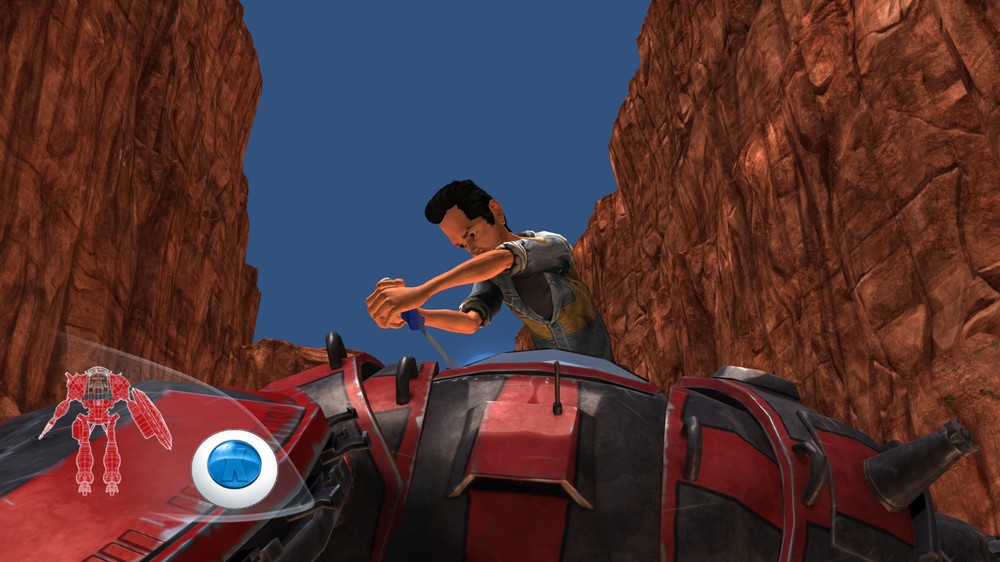 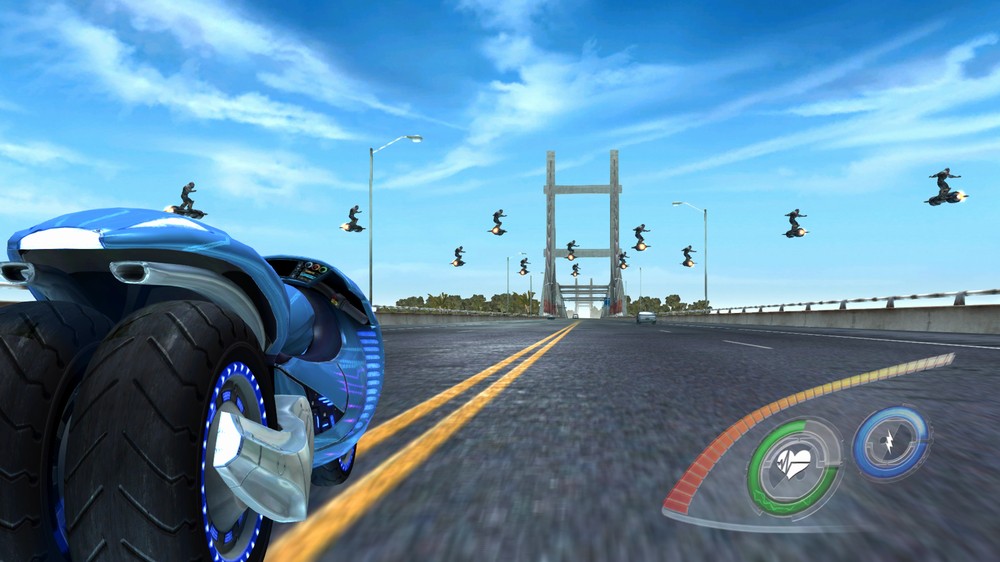 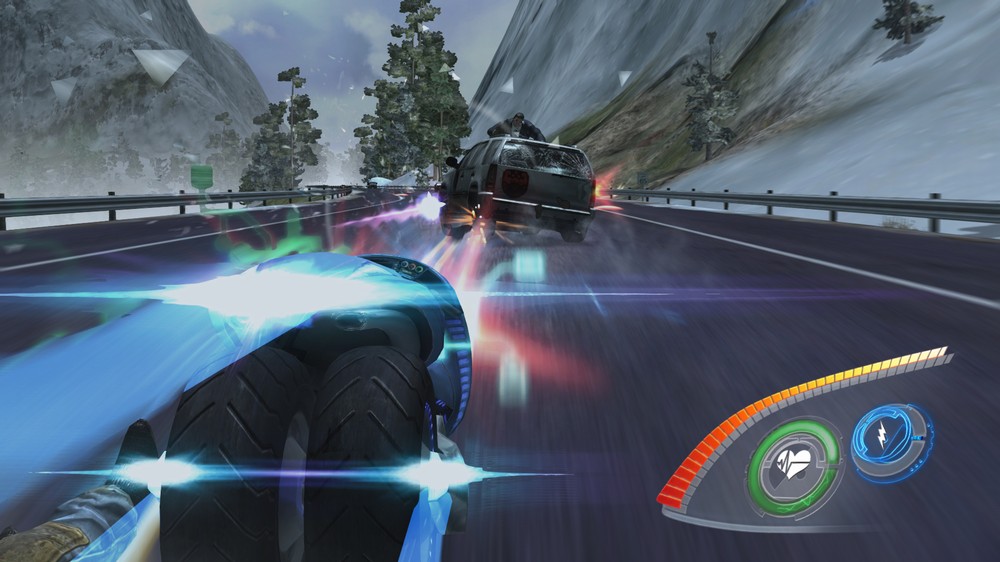 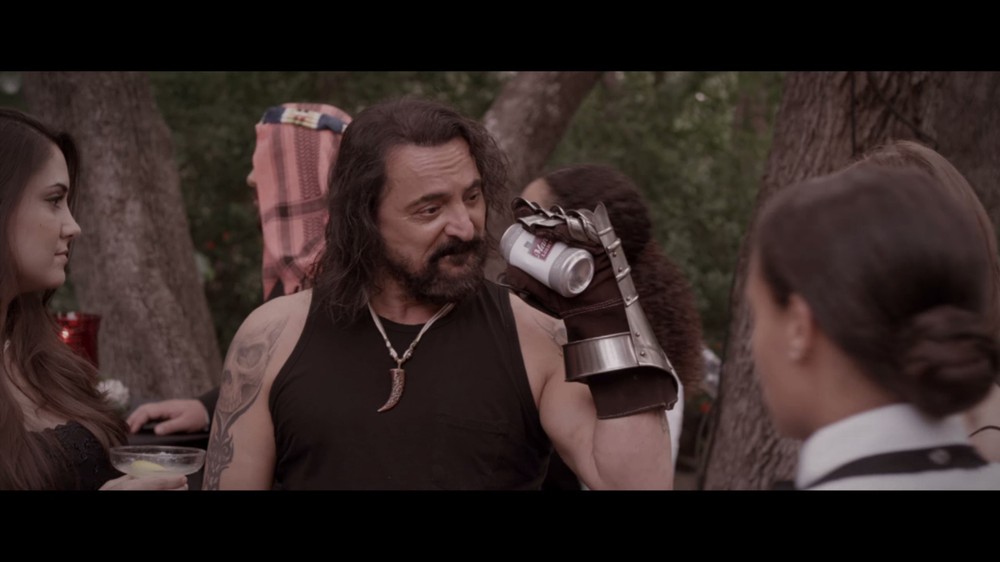 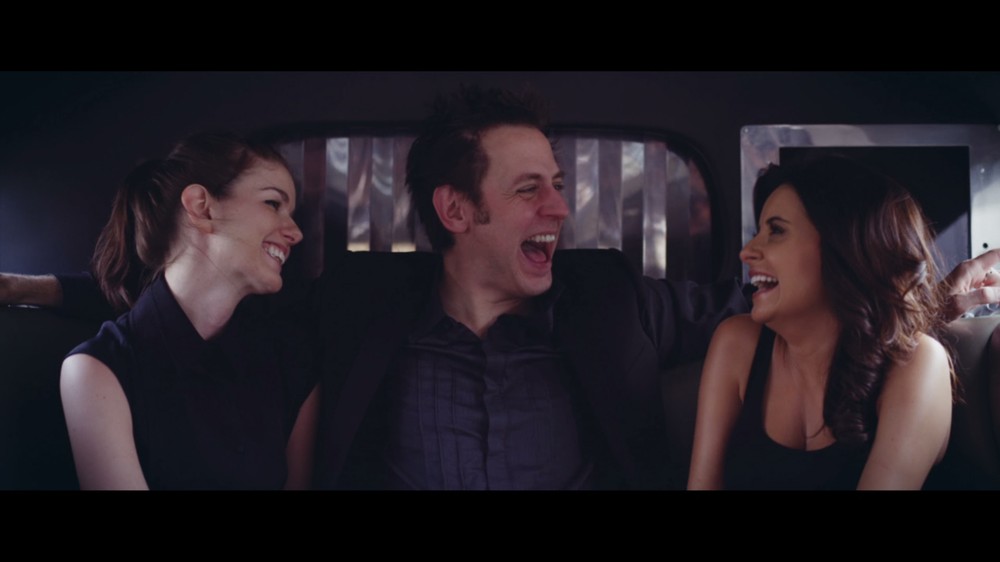