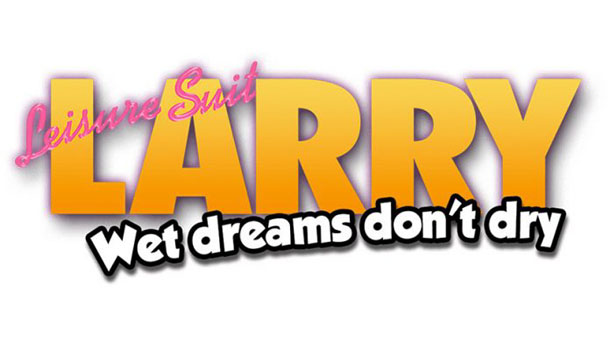 A refreshing blast from the past.

I might have discovered PC gaming with Zork on a TRS-80 in my local radio shack back in the early 80’s, but it wasn’t until Leisure Suit Larry in 1987 that I discovered graphical adventures.  I instantly fell in love with the entire library of Sierra adventures and even managed to get a job up in their mountain studio in Oakhurst, CA in 1990, and wouldn’t you know, my first project was the VGA conversion of Leisure Suit Larry.  Not only was this one of the first games to utilized 256 colors, it also offered a mouse-driven interface that would eventually replace the text parser in all adventure games moving forward.

Needless to say I am a huge fan of the franchise (even the bad ones), and was instantly excited when I learned a new game was in the works; even more so when I learned it was a time-traveling reboot of sorts.  Larry was already trapped in a misogynistic 70’s mindset when he was trying to survive the singles scene in his original games, so I could only imagine how out-of-place he would be in the 21st century and digital dating.  I was not disappointed. 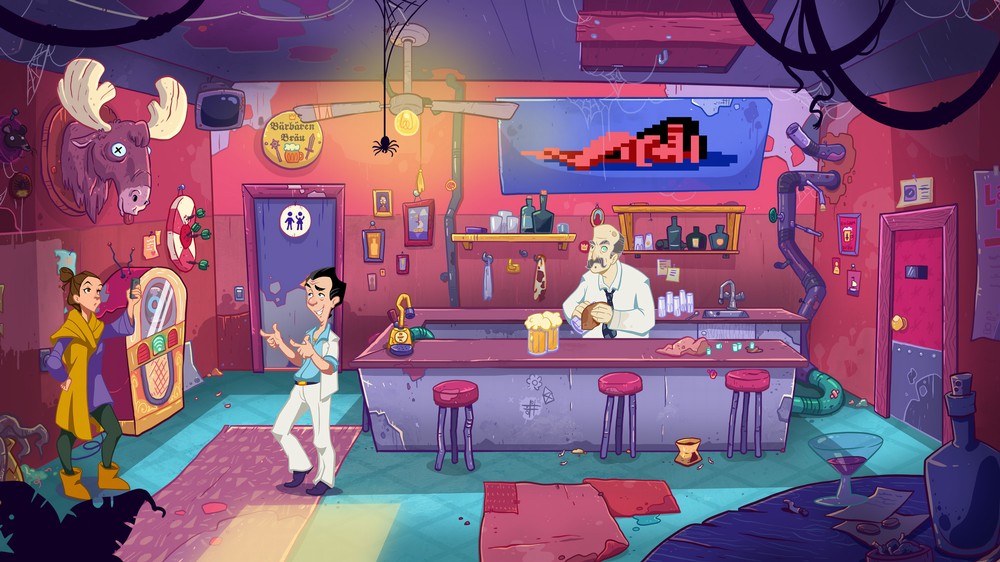 Leisure Suit Larry: Wet Dreams Don’t Dry begins with our white-suited hero trapped in some sort of underground bunker.  When he finally emerges on the street above we find him right in front of Lefty’s, the infamous bar that started a legacy.  What follows is 8-10 hours of classic point-n-click adventuring that captures not only the essence of a Larry Laffer game, but also the mundane explorations, item hunts, and crazy-ass puzzles that modern adventures seem to have outgrown.

Most of the humor in Wet Dreams Don’t Dry is based on just how out of touch Larry is with the technology of the time.  Instead of payphones you now have the PiPhone from Prune, and instead of calling a cab you have ride sharing, and instead of picking up chicks in a bar you have to have a Timber profile and maintain a good score.  The game does a fantastic job of taking nearly every significant modern day reference or piece of pop-culture and creating a parody.  You can spend hours quizzing Lefty on all the modern day changes, but your ultimate quest is getting a date with Faith; the hot executive assistant over at Prune.  Naturally, she’ll only date someone with a high scoring Timber profile so it’s up to Larry to match, meet, and have sex with as many people on Timber as possible to reach that target score. 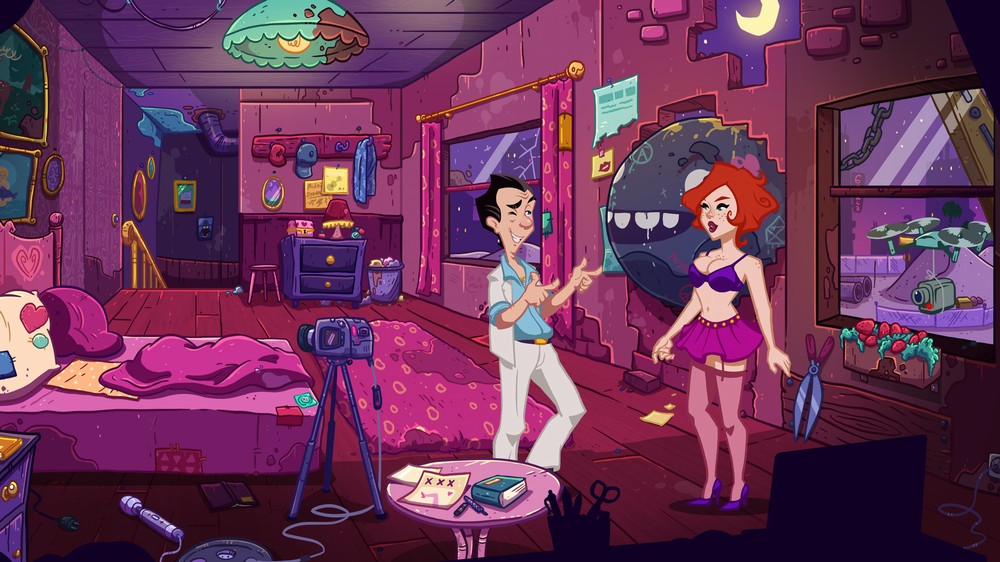 Nothing is sacred or out of bounds for this hilarious parody, as Larry meets up with girls and guys from all walks of life.  There is the cam girl who dreams of stripping, the rock and roll chick who lost her drummer and her guitar, the socialite blogger for InstaCrap and her sexually confused boyfriend, and all sorts of other crazy NPC’s to interact with as you try to survive dating in 2018.  The basic rules of adventuring are in full effect; pick-up everything that isn’t nailed down and talk to everyone about everything.  While most of the quests and puzzle items are fairly logical there are a lot of solutions masked in repetition, so you have to visit and revisit the handful of destinations frequently to see if something changed in the environment or if there is a new dialogue option added to the list.

This will likely prove frustrating to those who have only played modern adventures that are more linear and structured.  Leisure Suit Larry just gives you all the pieces and leaves you to figure it all out for the most part.  You know you need a certain rat to sabotage a slot machine but you’ll never imagine the three items you need to assemble a rat trap….but you can figure it out using your own common sense and acknowledgement of the game’s special brand of humor.  The game claims to be non-linear and that’s true to a point in that you can be juggling five or more quests at once, but ultimately there is only one way through the story – you’ll just be all over the place trying to figure it out. 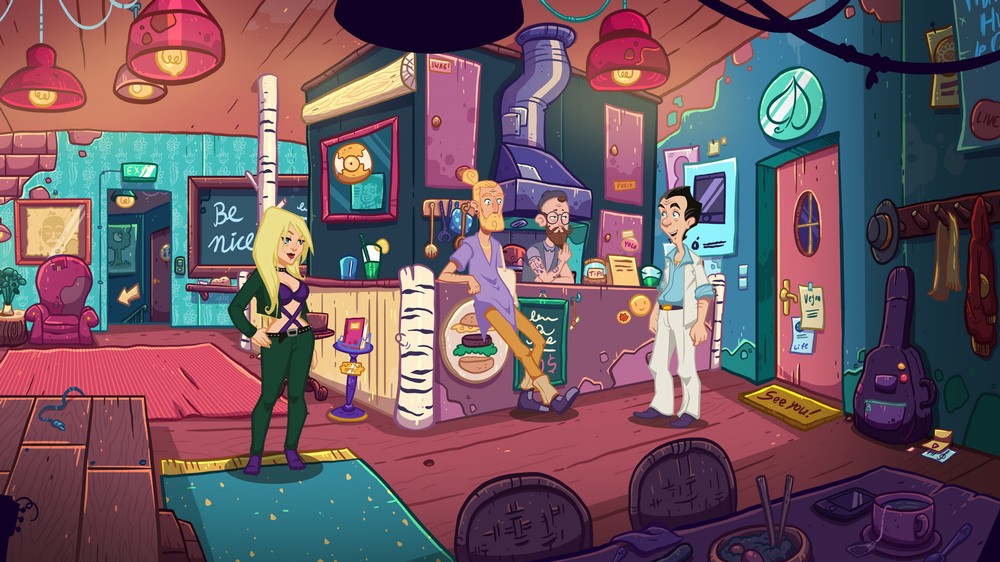 The game plays perfectly with just a mouse, and while not officially supported, you can use a gamepad to move around with the left stick and move the cursor with the right; however the cursor movement is so slow you won’t want to do this.  A keyboard offers a few shortcuts but is unneeded.  Load times are instantaneously, even when starting up the game, and there are no waits between scenes or chapters.  There are some nice quality of life features like double-clicking a destination to skip the walking animations, and clicking to skip previously heard dialogue.

The presentation is perfect both visually with its heavy use of pink and purple hues, and especially with the voice acting.  I have to admit it was a bit weird seeing a skinny Larry this time around, but now his build actually matches his Don Knotts/Mr. Furley personae, and the rest of the voice cast turns in some fantastic voice readings for all their respective characters.  The game is loaded with visual and audible humor and plenty of in-jokes for veterans of the series like me.  The Timber profiles are awesome with parodies of Lara Croft and even King Graham from Sierra’s King’s Quest games. 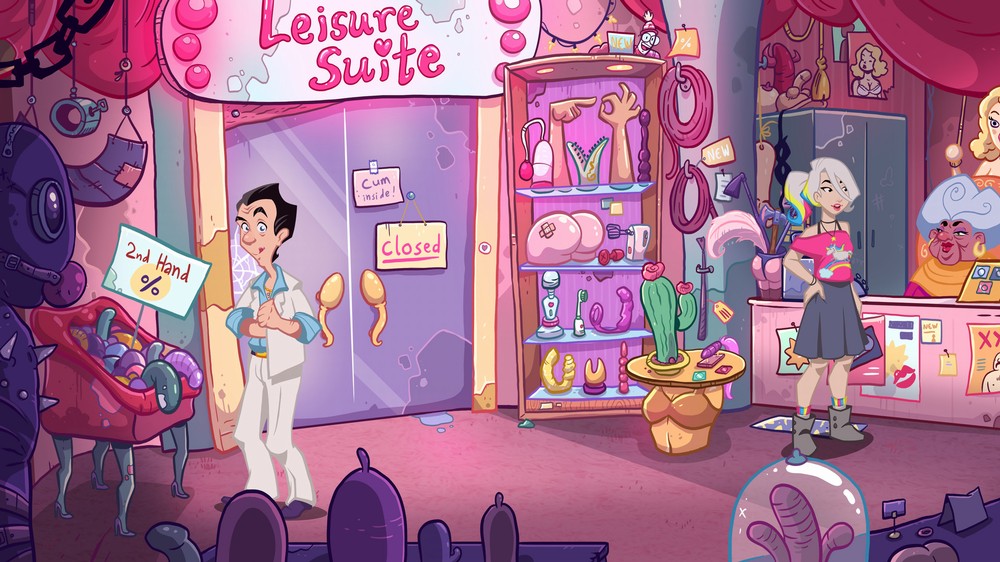 Leisure Suit Larry: Wet Dreams Don’t Dry is a refreshing blast from the past that made me forget how much I missed those golden oldie adventures but also just how much we have evolved beyond those ancient designs.  There is a lot of backtracking and mundane grunt work lurking in New Lost Wages; something you’ll realize if you go back and replay the game knowing exactly where to go and what to do.   It seems to be part of the game and puzzle design, and normally I’d say it was to pad the game length, but with half-second load times it doesn’t even do that.  At least parents can show their kids what they had to endure 20 years ago.

And speaking of kids, despite the saucy title and rampant sexual innuendo in Wet Dreams Don’t Dry, the game is relatively harmless.  Much like the original, nothing every goes Larry’s way when it comes to hooking up with the ladies (or the lads), and while there is a modest amount of animated art panels sliding around with scantily clad people engaged in various activities it is far from graphic.

Despite getting stuck a few times I did have a great time with Leisure Suit Larry: Wet Dreams Don’t Dry, and even when I was frustrated with all the back and forth travel there was always a smile on my face and guaranteed laughter with each new counter.  The puzzles range from amusingly simple to hair-pulling, WTF-insanity, but when everything finally clicks you’ll realize you just had a great time playing a great game.  Check it out on Steam now and tell them “Ken Sent Me”. 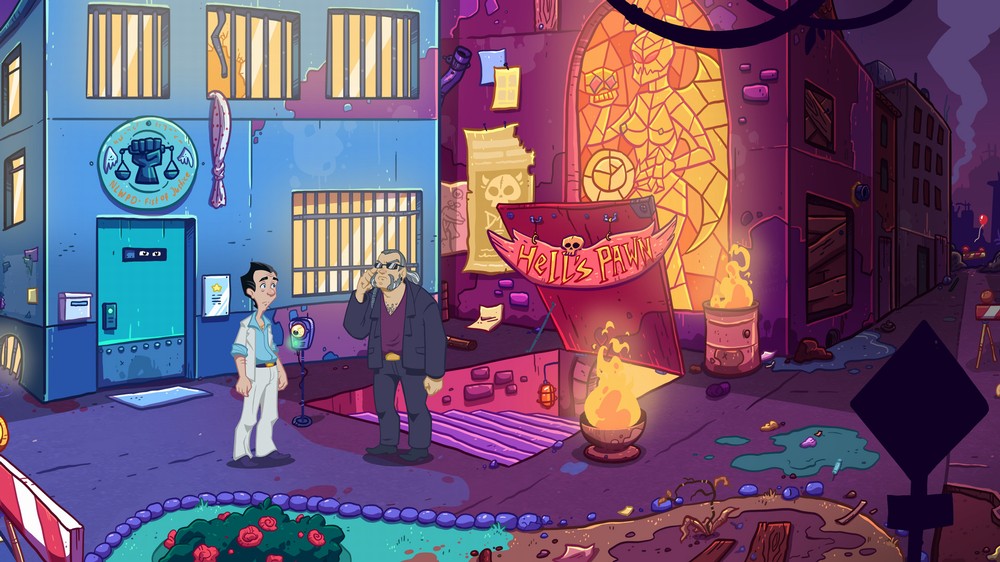 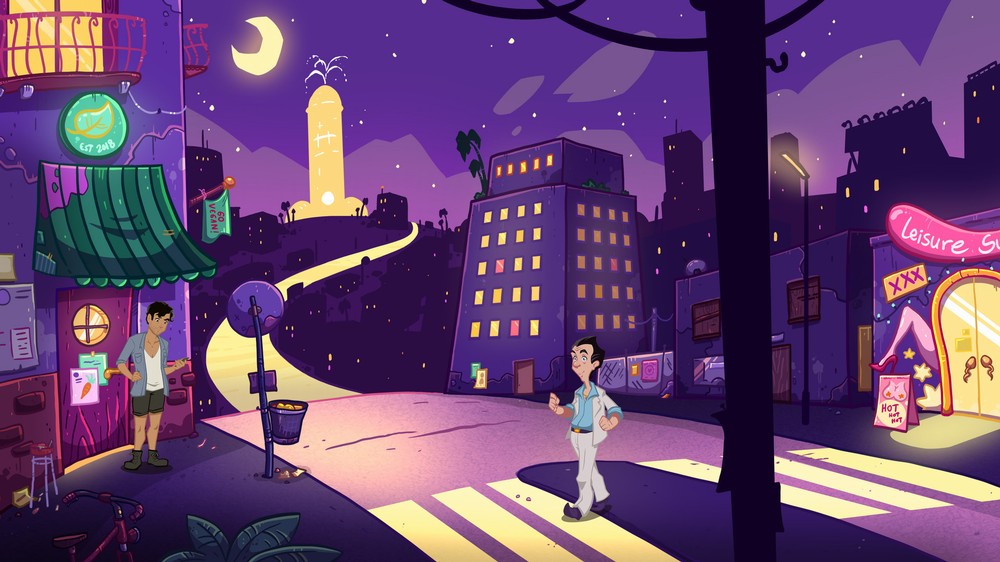 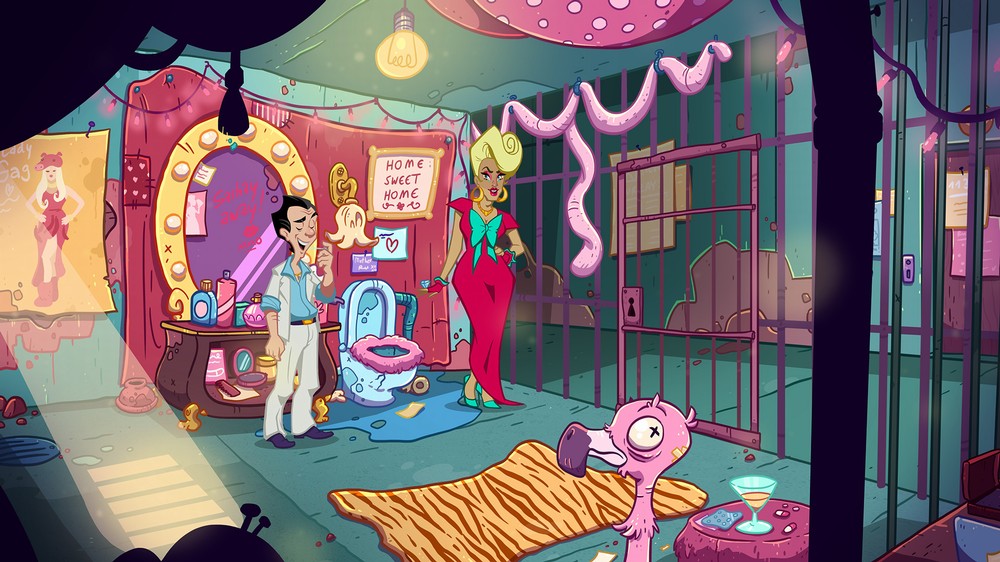