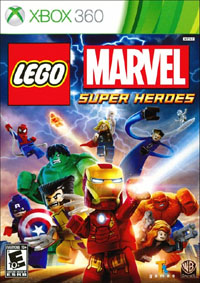 Has its share of flaws, but still offers light, silly, breezy fun.

LEGO Marvel Super Heroes has a lot going for it, just in the title. Marvel’s universe is incredibly rich, and has spread across pop culture enough to be immediately recognizable. Meanwhile, the LEGO video games are famous for their quick action and wit. What seems like a perfect match, though, ends up marred by pace-breaking pauses, awkward character switching, and writing that misses the mark more often than it hits.

The game begins with the Silver Surfer being shot down, and the pieces of his board, full of the Power Cosmic, being collected by some of Marvel’s best known villains. Doctor Doom leads the cabal, with the aim of building his Doom Ray of Doom. It’s up to S.H.I.E.L.D. and the superheroes that help them end this plan and make sure the world is safe, even as the threat of Galactus, devourer of worlds, looms in the background.

The gameplay pretty much amounts to chasing villains through the game’s stages, battling hordes of enemies, and switching heroes to use their special abilities to activate switches and traverse the environment. Some of this makes sense, like needing fire powers to deal with ice, or flight to traverse areas you can’t run and leap through. Sometimes, there are switches only a thrown shield or sharp claws can activate. It doesn’t really take away from the game, but it does make me wonder what might have been if they had stuck closer to obstacles that could be surmounted through the heroes’ powers, rather than flipping switches. 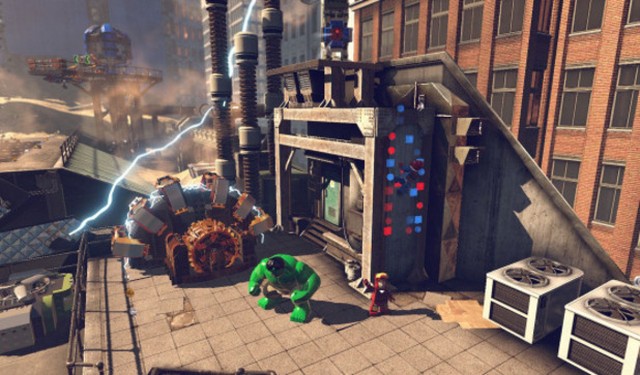 You have a group of heroes at all times, perfect for the game’s cooperative play, but switching between them can be something of a pain, with no easy way to tell who you’re going to switch into until you’re already there. The controls are decent enough, but they tend towards strangeness and imprecision. Sometimes, you need to hold a button rather than pressing it, and the game has a tendency to do the opposite of what you want.

Similarly, when you’re in the open world, the flight controls use the face buttons rather than a stick for the angle of your flight and, along with the driving, it’s difficult to make tight turns at speed. In a superhero game, traversal should be a joy, but LEGO Marvel Super Heroes manages to make it into something of a chore. The game’s open world segments are almost obscured behind the rapid fire missions, but it can still be fun to mess around. It’s not super deep in terms of how you can interact with the world, but I had some fun destroying cars as Doc Ock or firing guns to no effect at civilians as the Red Skull before heading back into the missions.

There’s a lot of charm in the way this is all presented, a world of bricks and minifigs. Everything from flames to Wolverine’s claws are represented as they would be in a world made of LEGO pieces. Presentation manages to be the game’s biggest strength, and its deepest weakness. Marvel’s known for its writing, whether it’s Spider-Man’s wisecracks or the patter between members of The Avengers, and the LEGO games have a reputation for their physical comedy. 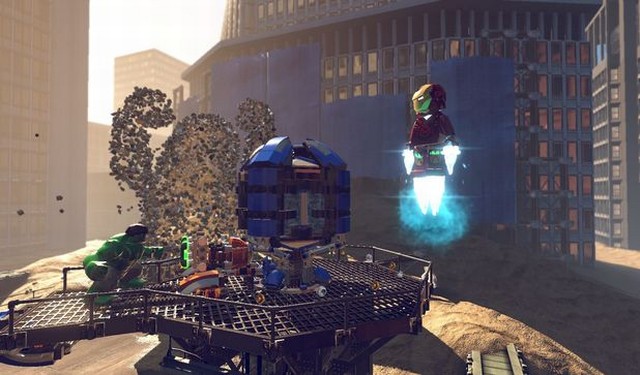 While the latter is carried through, and brilliantly, the former is entirely absent. The game would have been better off as a silent pantomime than with some of the dialogue we ended up with. Even taking into account that the LEGO games are kids’ games, a lot of the dialogue, like Sandman making hand puns on the level with Batman & Robin’s ice puns, or Captain America’s shoehorned references to how much he likes America, just straight-up talks down to the target audience.

On the other hand, environmental graphics are brilliant, but there’s no way of telling what pieces are breakable, or which are part of a puzzle, without wandering around, attacking everything. In what should be a light, breezy game, this slowed things down too much, and too often. Whether I couldn’t tell what hero to use to break down a cracked wall, or didn’t know that a given object needed to be destroyed so I could build what I needed to proceed, it still ate up a lot of time, broke the flow, and made the game frustrating. What the game will hint at and what it won’t seems a little arbitrary.

That said, when it does flow, it’s good. LEGO Marvel Super Heroes has its share of flaws, but as a game for a kid with the attention span for it, it’s better than most things on the market. Adult fans looking for light, silly, breezy fun might find that its flaws outweigh the times it hits the target. 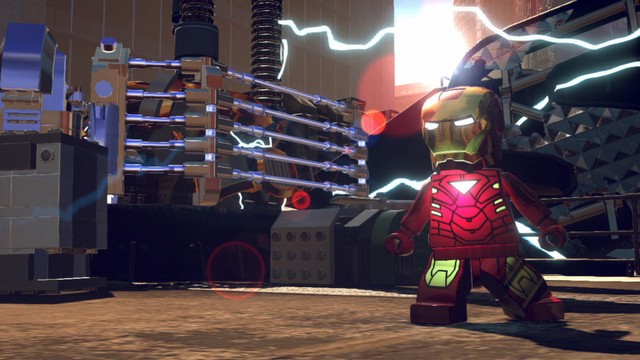 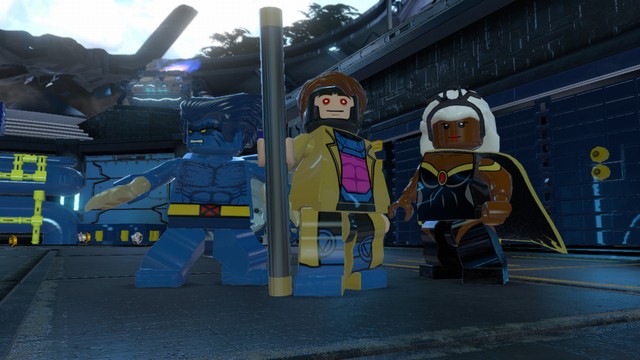 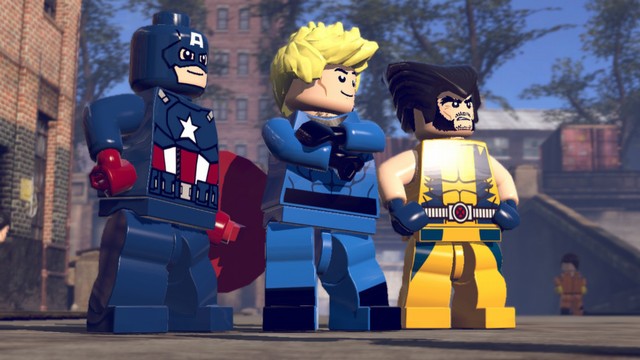 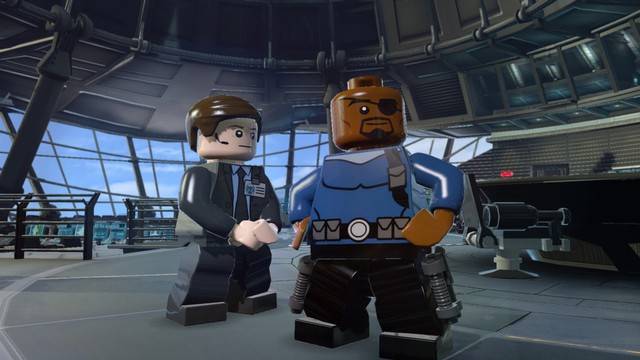 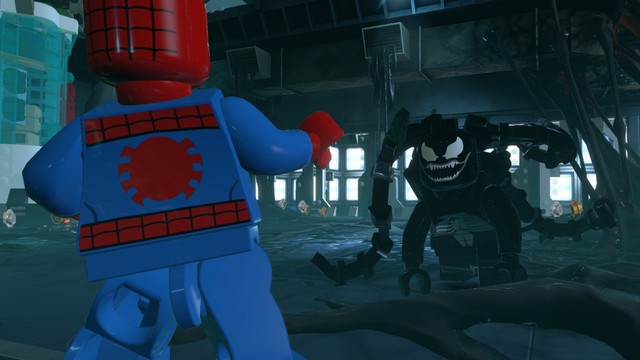 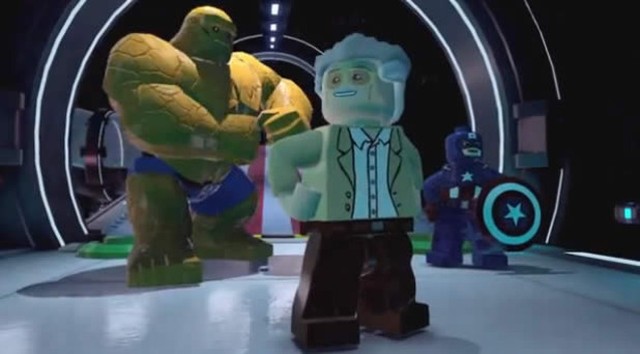 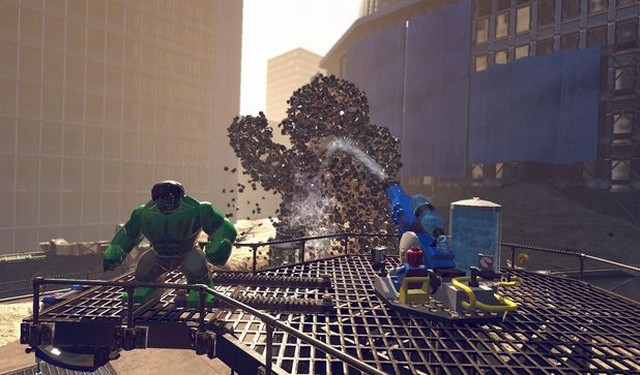 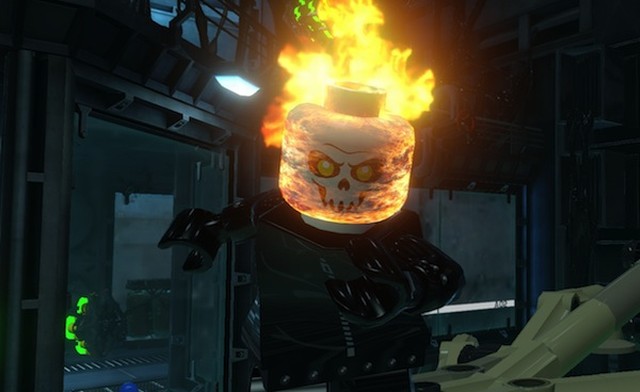