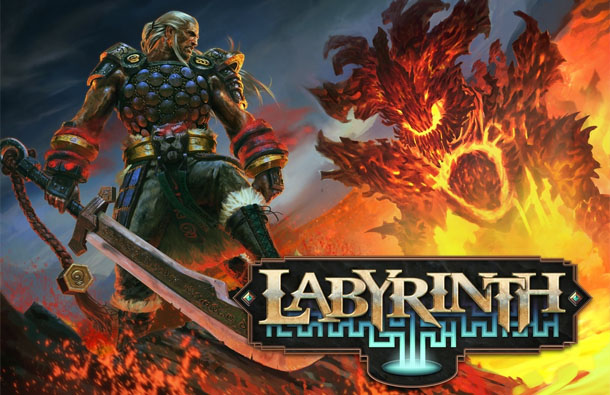 Unique blend of CCG combined with a 3D grid based strategy game.

As much as I would love to say that this review was about a movie that mostly takes place in a fantasy world where a girl must get back her little brother from a Goblin King after having the emotional temperament of Anna right after being shot down by her sister this isn’t that. Instead I’m going to be doing an Early Access review about the current state about a new Kickstarted Collectible Card and Strategy Role Playing Game called Labyrinth by developer Free Range Games.

At first mention you have to ask yourself how both a CCG and sRPG can exist in the same environment. While both genres have structures based upon strategy and turn based gameplay they differ largely in execution. While strategy RPGs are more commonplace on the PC, games based on collection card games are far less so with only one or maybe that I know of firsthand. That’s all changed when I first laid my eyes on Labyrinth’s innovative take both genres.

The events of Labyrinth takes place on a world called Hylea where every player’s journey starts in the city of Starfall. The city surrounds a lake with a hole in reality right in the center. This site is laced with a powdery substance that grants extraordinary powers and abilities to those that use it. The city is filled with people that have flocked to Starfall to seek their fortune and the now the pacts and alliances that have maintained peace among the diverse ethnic cultures is failing. It’s only a matter of time before things get ugly and Heroes have to defend what they’ve gained. 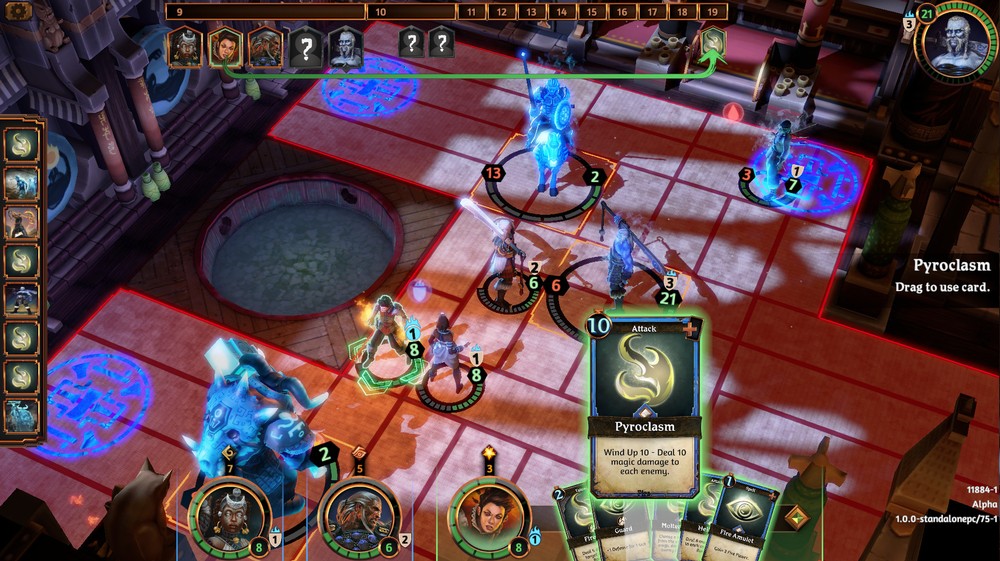 This is where Labyrinth gets interesting as with most CCG videogames I’ve tried like Magic or more recently Gwent you are basically just seeing cards with minor animations to announce attacking or blocking. Here players get to see a 3D representation of not only their Heroes but their attacks as well on a grid based battlefield. You start out with a single hero and their deck but as you play more you will unlock several other hero decks as well. As of this review there are only 5 heroes and by association 5 bosses to defeat.

Much like many of the collectible card games that I’ve tried you have to assemble a deck that is comprised of any of the four disciplines of magic: Warfare, Wizardry, Faith and Skullduggery. This is largely based upon your heroes as they each use one of the four disciplines and are initially comprised of both offensive and defensive cards such as sheer close quarter strength, ranged fires spells, healing spells and many others. It all comes down to the playstyle that you want to pursue and to build your decks accordingly.

Labyrinth does do a great job of easing players into the inner working of the gameplay dynamics and by the end of the first real boss fight I felt like I had a pretty good grasp on how to proceed. I even like the first boss’s mechanics require you to take a careful approach to taking him out. Bosses will always have some ability that can spell doom quickly but they also have actions like the ability to cancel out any active wind-up (charged actions) making things tougher for you. These boss cards are rather cool as they visually define what the theme of the dungeons rooms are. 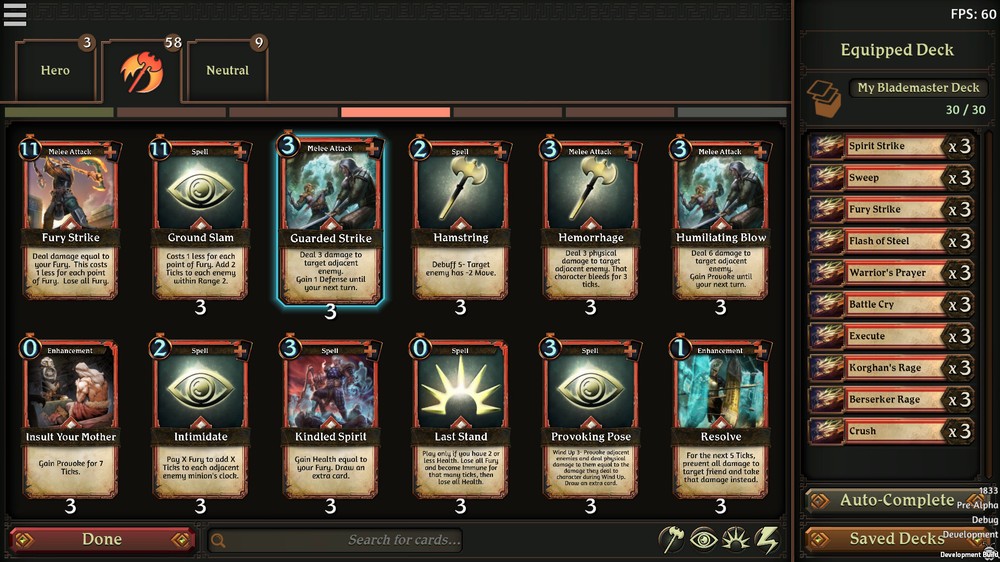 The one of the coolest parts about Labyrinth so far is that it is an online player versus player style game that doesn’t exactly feel like one thanks to the asynchronous design. When you log into the game you can then dive into a raid with a chosen difficulty with your hero decks against another player’s boss deck. The beauty is that unlike say Magic the other player doesn’t have to be online as you are matched and pitted against another players defenses as you seek to increase your decks with new cards that can be won, crafted or purchased. Your Heroes and Bosses will level up the more you play like any traditional sRPG but with one notable exception. Boss cards only gain experience if your dungeons are raided so it boils to waiting for players to eventually get matched up against you. In my time playing Labyrinth it happened a few times so I was able to see it firsthand but it’s far too early to say how well this feature will work out.

Ah yes purchases! Labyrinth is designed to be a Free 2 Play style game upon its full release so there will be micro transactions to utilize if you so choose. However in its current state you can only purchase card packs with the earned in-game currency gained by victories as well as logging in every day. People who purchase the game now in its Early Access form will be granted 10 card packs from the game’s core set upon launch. Regardless of if you decide to spend real money or not when Labyrinth goes live, there looks like there will be plenty of ways in which to earn cards and even create some of your own with the crafting system that allows you to enchant or disenchant cards to create some new ones. 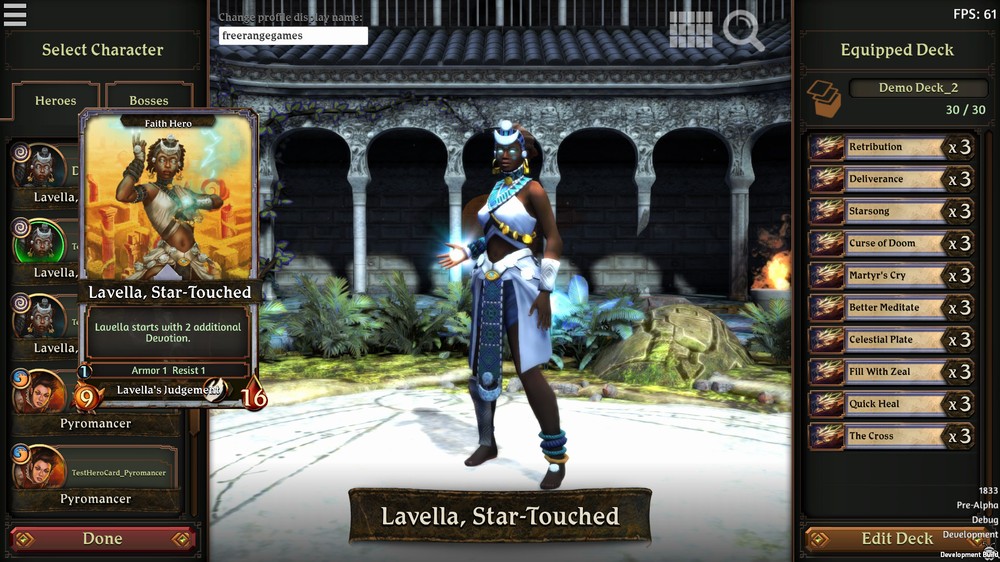 I think though that Labyrinth’s biggest strength that I can see so far is that each card in your respective decks are not just numbers and stats on a piece of digital card but a living part of the world of Hylea. Each card represents not only a Hero or Boss but also a small piece of their will or prowess in battle. While each hero makes up the basic classes of any good RPG they seem to be so much more than that once presented as people and not just a static card.

Free Range Games so far has done an amazing job not only creating the card designs but also their visual counterparts. The character models look great and their animations actually look like they carry some weight especially with characters like Korghan Twice Born. I actually really like the look of Renna, the Embermage as well with her fire lit palms looking like she wants nothing more than to raze everything to the ground. The level or rather dungeon designs are based upon the boss at the end of each dungeon and so far I got to say that impressed with the details put into the world considering that Labyrinth is one part sRPG.

Labyrinth is definitely a title that is going to have lot of room to grow long after its initial release much like all the physical CCG games out there. The more people that start to play Labyrinth, the more endless opportunities to dive into other people’s dungeons and learn to hone their skills against a diverse amount of decks will arise. Its unique blend of combining a CCG with a visual representation of characters in a 3D grid based strategy environment really allows a player to visualize and react to a situation far better than any traditional CCG could ever hope to accomplish. I definitely look forward to seeing what Labyrinth will have in store for us when the final product is released. Until then I’ve got some decks to build and you should check out Labyrinth for PC for yourself today. 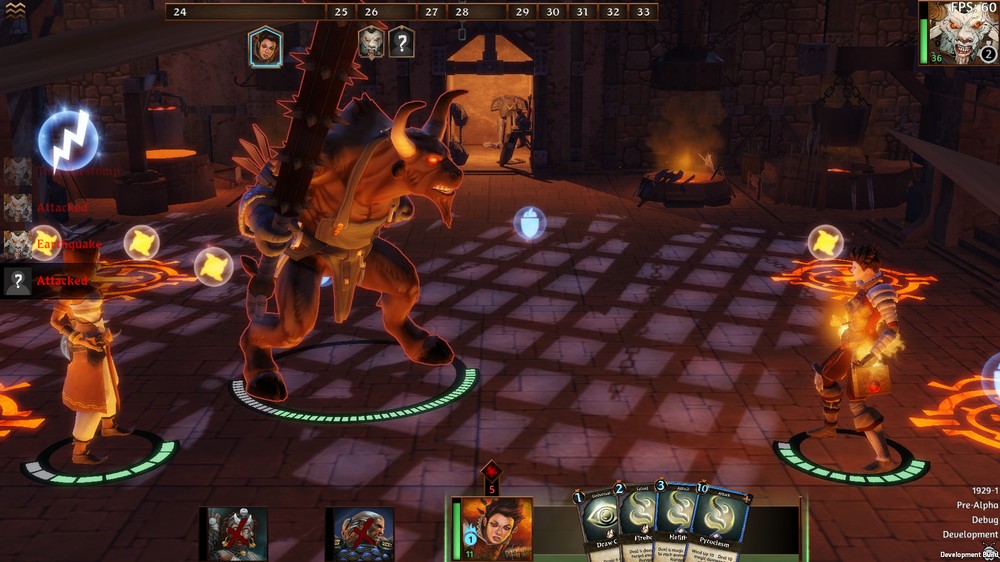 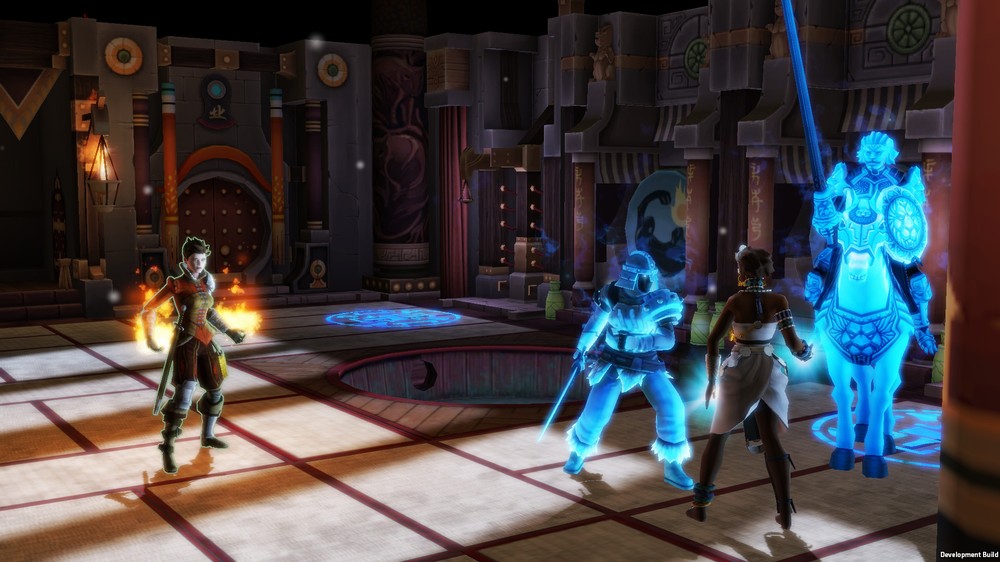 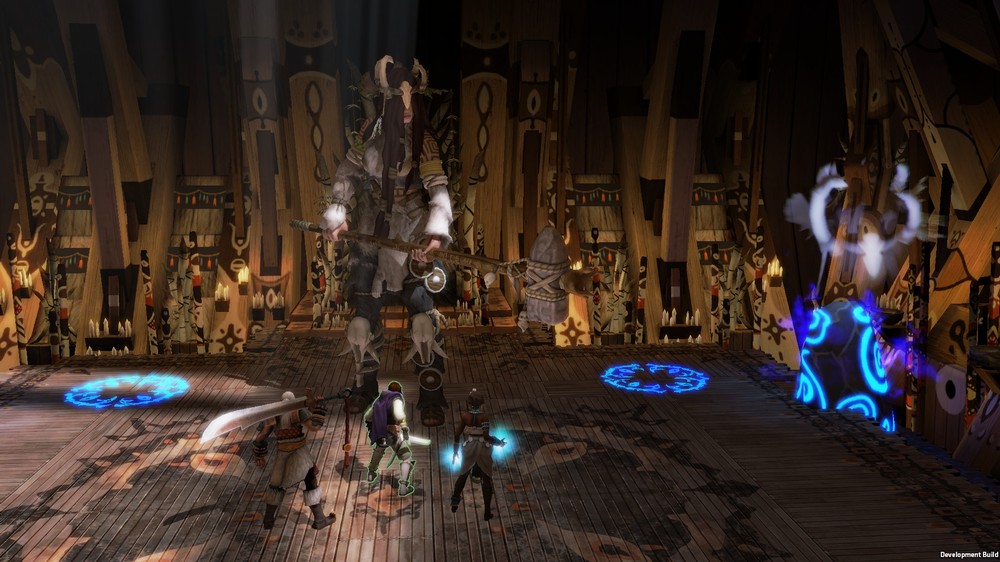 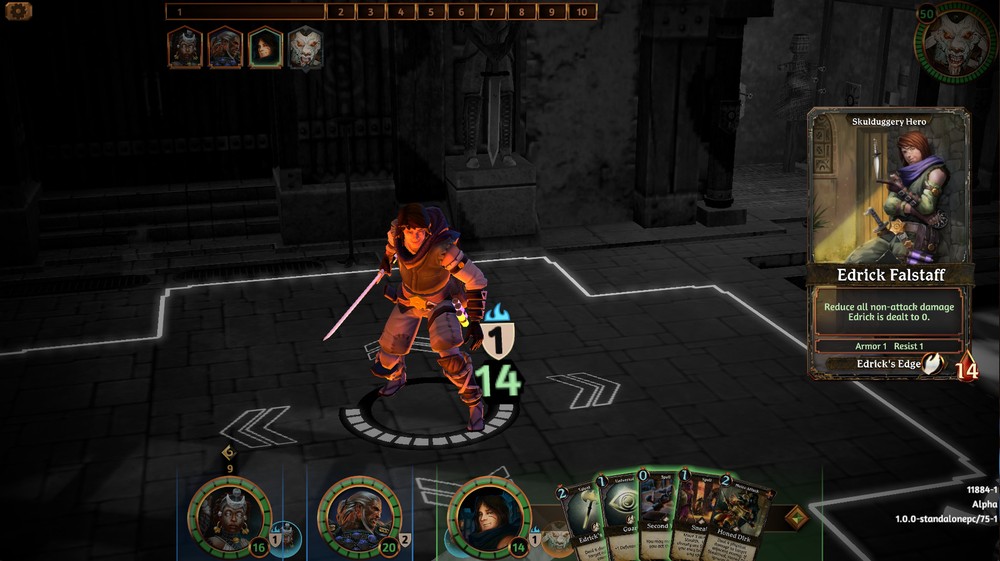 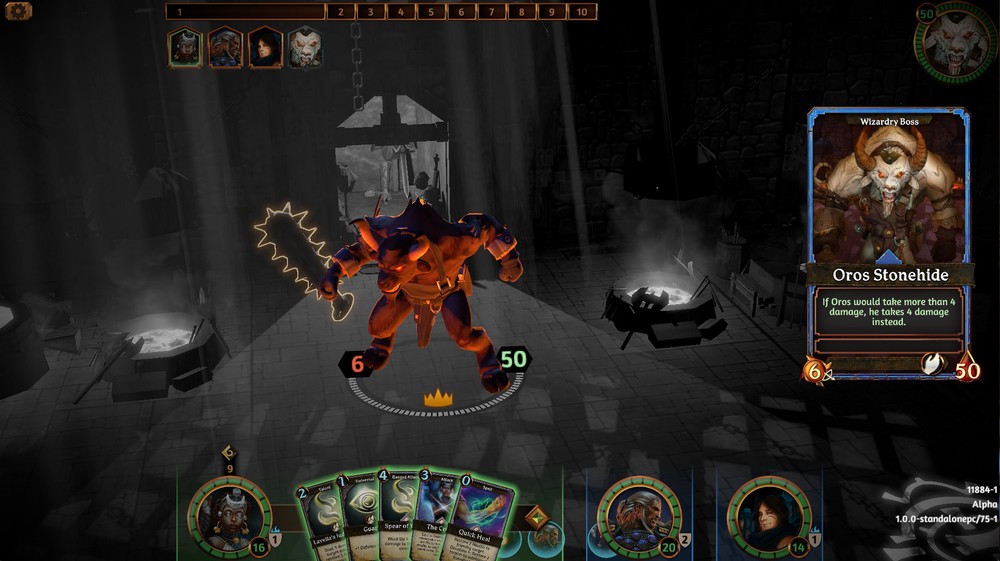 1
768
The Walking Dead: Saints & Sinners Review – Oculus Quest
2
706
Synth Riders Celebrates Anniversary with a Month Full of Treats and an Oculus Ques...
3
705
Metamorphosis is 33% Off on Steam!
4
705
Werewolf: The Apocalypse – Heart of the Forest launches on October the 13th
5
705
Worm Jazz Review – PC
6
705
Take to the Skies and Choose a Side in the New Trailer for Next Generation Air Com...
7
705
CRASH BANDICOOT 4: IT’S ABOUT TIME IS AVAILABLE NOW
8
705
Frictional Games Shows Off First Gameplay Footage of Amnesia: Rebirth
9
705
Join the Galaxy’s Finest as Star Wars™: Squadrons Soars Into Homes Today
10
704
The Falconeer First-Look Preview – PC
All Original Content on Game Chronicles is Copyright (c) 2002-2020
Sinjin Solves Walkthroughs Copyright (c) 1996-2020 by Mark Smith