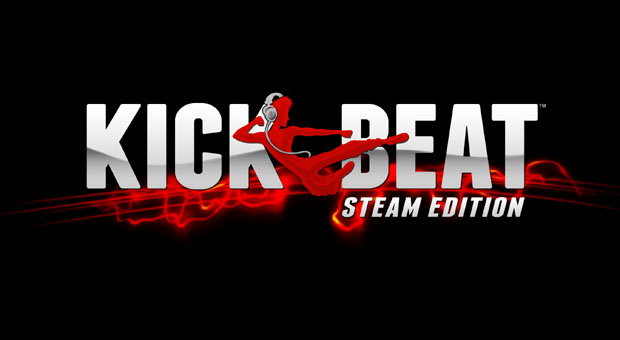 Xbox 360 is preferred Steam controller but it doesn't work well for this game. Track list is hit and miss with lots of obscure music.

If you like the song selection and enjoy rhythm games with flashy graphics then you'll love this.

Last September I got to review KickBeat for the PS3 and Vita, and now the Steam Edition is coming to the PC later this month.   KickBeat is an oddity at best; a button-tapping game that those who play Dance Dance Revolution without a dance mat will know exactly how it works.  In fact, after a few hours of jamming on the face buttons and D-pad I had to wonder if this game wouldn’t be better with a dance mat. At least I would be getting some exercise.

It’s been quite some time since I’ve played a music game. One only need look at the layer of dust on my Rock Band instruments to see that I, much like the rest of the gaming world, has moved beyond the music game genre, but KickBeat tries to lure you back with some flashy graphics and cool karate animation. It even has a story, crazy as it sounds. Apparently all music that has ever existed or ever will exist is kept in this giant crystal orb. Naturally, a corrupt music executive steals all the music and you must retrieve it, which is exactly what you’ve been trained to do as a special member of an ancient order charged with protecting the orb. Prepare for the biggest battle against music theft since Metallica took on Napster.

A three-part tutorial eases you into the concepts of the game which are remarkably simple in theory but fiendishly impossible to pull off in reality; especially in the harder difficulties. You will travel the world fighting in various nightclubs, wrestling rings, a rooftop helicopter pad, and other venues. Regardless of the setting all arenas are circular and you will find yourself in the center surrounded by literally hundreds of henchmen and the occasional boss. Enemies come in three colors; blue, yellow, and red with each color assigned to a specific type of beat. Yellow are whole notes, blue are half notes, and red enemies will always sync up on the corners for a two-button combo kill. 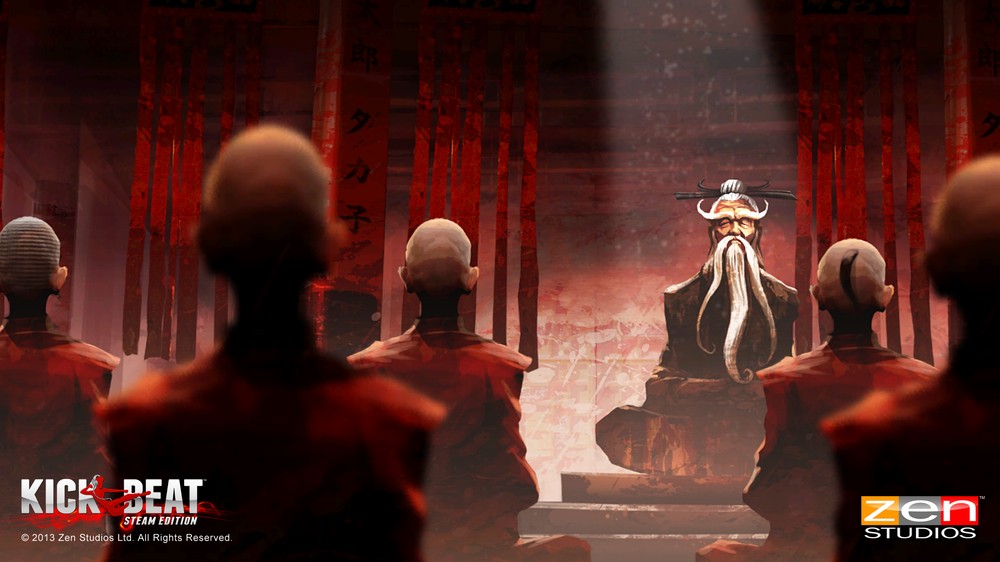 As the pulsating mosh pit throbs to the beat of whatever track is playing, enemies will politely wait their turn, approach the inner circle and begin their counterclockwise path around the player leading to a cardinal spot on the ring that matches to a corresponding button and/or D-pad direction. You also have “sustain notes” that are indicated by two fighters linked with a yellow motion blur. You tap and hold on the first enemy and release on the second for a successful takedown. I found that if you could train yourself to split the directions between the two sides of the controller some of the diagonal combo presses were easier to pull off, but double-tap attacks almost never registered on the D-pad.

The game is playable with a keyboard, but you probably wouldn’t want to.  The Xbox 360 gamepad worked well enough, even if none of the menus had controller button icons.   Only by going into the options help screen will you find that A advances, B backs up, and Y retries.   The D-pad has always been a bit iffy on the 360 controller, plus with it being offset with the buttons it’s not nearly as intuitive or responsive as it was playing on the PS3 and Vita last year.  You might want to use a PS3 or PS4 controller for best results.

While you can finish a level by merely clearing away the total sum of all enemies you’ll probably want to go for high scores and rankings on the leaderboards. This means timing your presses precisely for that “perfect” ranking, and anything less than perfect is indicated with a +/- to indicate if you were early or late. The button prompt will flare up at the perfect attack time, but you’ll end up working off of instinct; especially if you go for the hard or expert modes that remove those button prompts entirely. 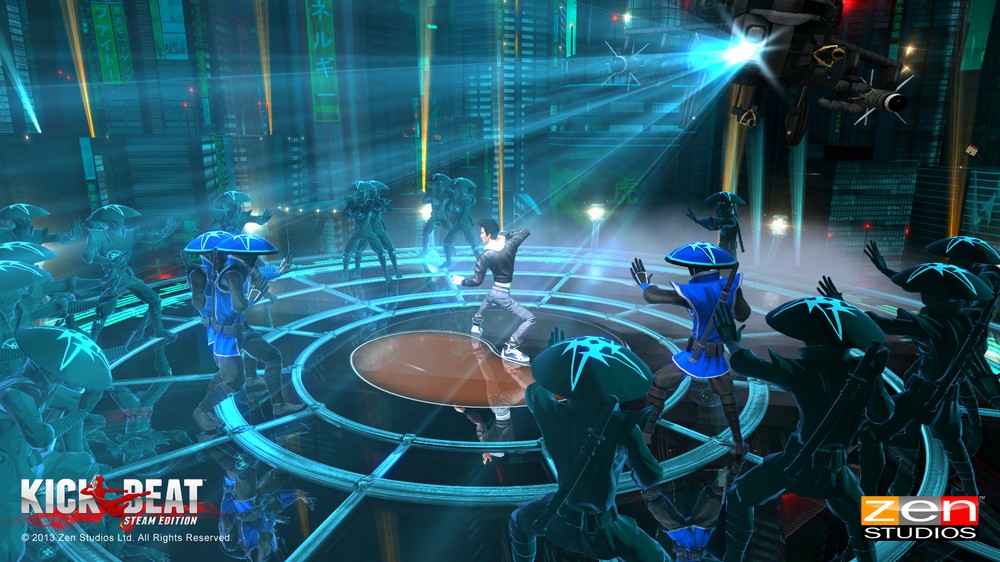 You also need to collect power-ups, which 90% of the enemies seem to be carrying into battle. These floating icons indicate if you will earn bonus points, refill your health, Chi, or shield, and require you to double-tap the button to defeat the enemy and steal their power-up. It’s a clever concept that adds a lot of unexpected difficulty since double-tapping really throws off your rhythm. When properly fueled you can trigger your Chi to increase your combo bonus scores or activate a shield to block a few attacks.

KickBeat is all about the gameplay. The story is forgettable and while I enjoyed the artistic cutscenes I won’t be watching them on future replays. You start off playing as Lee and can eventually unlock the female character who is admittedly more “fun” to watch. In fact, there are quite a few unlockables in the game that require you to earn gold star rankings on each level in each difficulty, even to unlock the right to play that same song on a harder difficulty. I found it interesting that you actually have to unlock Free Play and Survival modes as well as the Beat Your Music mode where you can create your own rhythm tracks using your own music.  The Steam Edition adds six new exclusive songs from the Electronic Super Joy OST by indie electronic artist enV,  bringing the track list up to 24.

A music game is only as good as its music and that was my biggest obstacle to overcome in KickBeat. Aside from Marilyn Manson’s, The Beautiful People I didn’t recognize a single song in this game, and to make matters worse I am not a fan of the genres they chose. P.O.D., Papa Roach, Blue Stahli, and Celldweller are nowhere to be found in my everyday listening rotation. What surprised me the most, especially for a rhythm game is just how weak the rhythm tracks are for most of the songs in the game.  I was a club DJ for 12 years and know how to find the beat in just about anything, but there certainly had to be better music available for this game. As it was, the whole thing came off feeling like a Taratino or RZA Kung Fu Grindhouse movie with some over-the-top soundtrack. 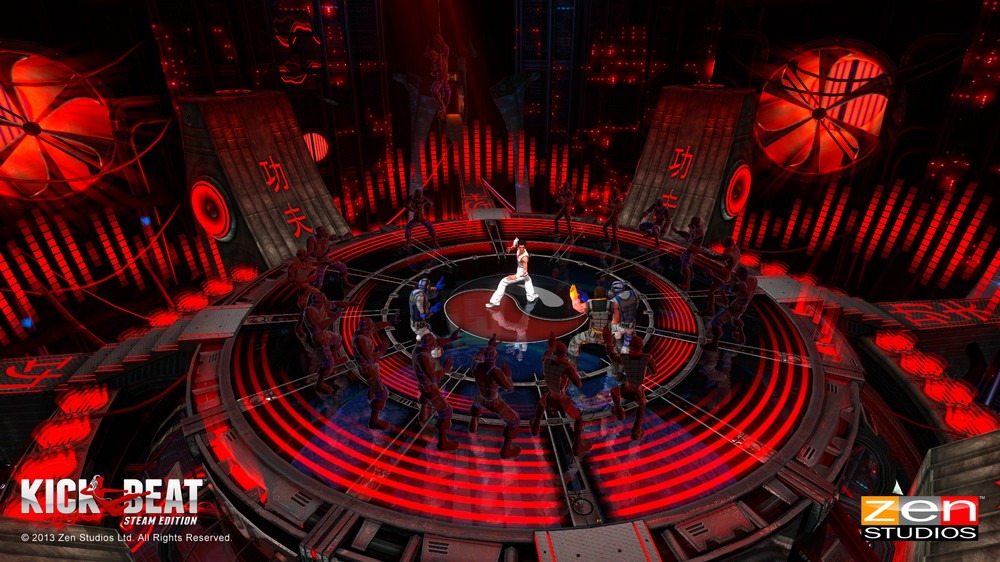 That is where Beat Your Music comes in. If you can’t stand the included music then import your own tracks and use the simple interface to track the BPM and then play custom levels. KickBeat takes on a whole new dimension when you start playing it to tracks like “Everybody Was Kung Fu Fighting” or “Click Click Boom” or fire up some DJ house mixes for some great gameplay with a real beat. Actually, just about any music you import is going to be better than what’s provided, but that is just my subjective opinion. Your taste may vary as will your enjoyment of the game.

The Steam Edition adds several new features and improvements on the original game.  In addition to the new music there is now an Advanced difficulty in Free Play.  Beat Your Music unlocks much earlier in the game so you can start playing around with your own music library, and the difficulty curve has been smoothed out a bit as to make the game a bit more approachable and rewarding as you advance to the higher levels.   Perhaps the biggest improvement are the graphics; totally amped up for the PC with DX11 support; KickBeat Steam Edition will blow you away with its fluid animation, flashy nightclub lighting, and visually stunning venues.   The hand drawn cutscenes look better than ever.   And of course you get 42 Steam Achievements, trading cards and cloud support as well as leaderboards to track your Kung Fu skills with your friends.

When I first played KickBeat last year I thought that the game was coming in too late in the music game cycle to be a success, but judging from the response and activity on those leaderboards there are apparently a lot of people who still like rhythm games.   The Steam Edition takes what was already there and adds and improves on the core concept in numerous and significant ways.  And while I’m still not the game’s biggest fan, I do have to admit that the more I play the more I am coming around, and it doesn’t get much better than the new Steam Edition. 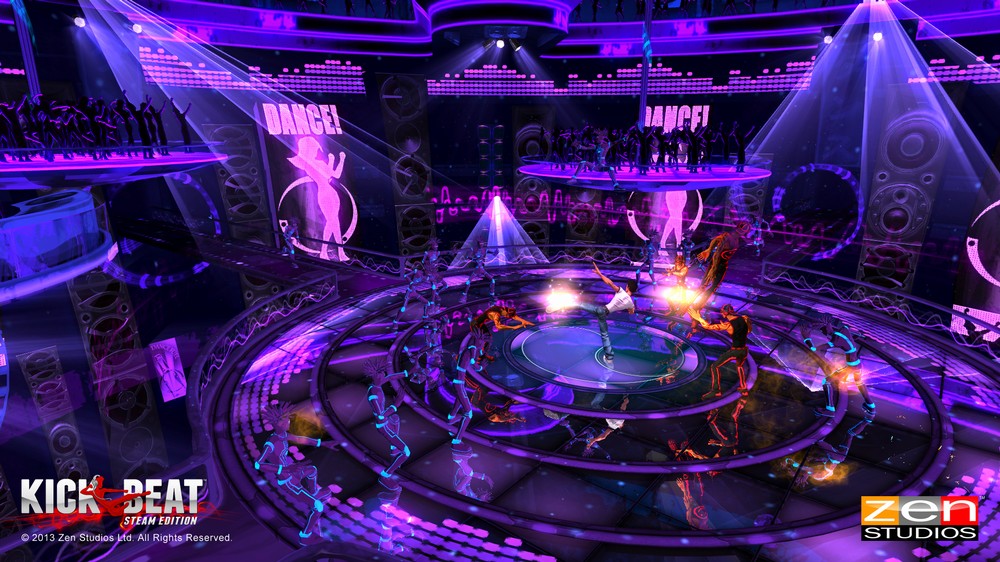 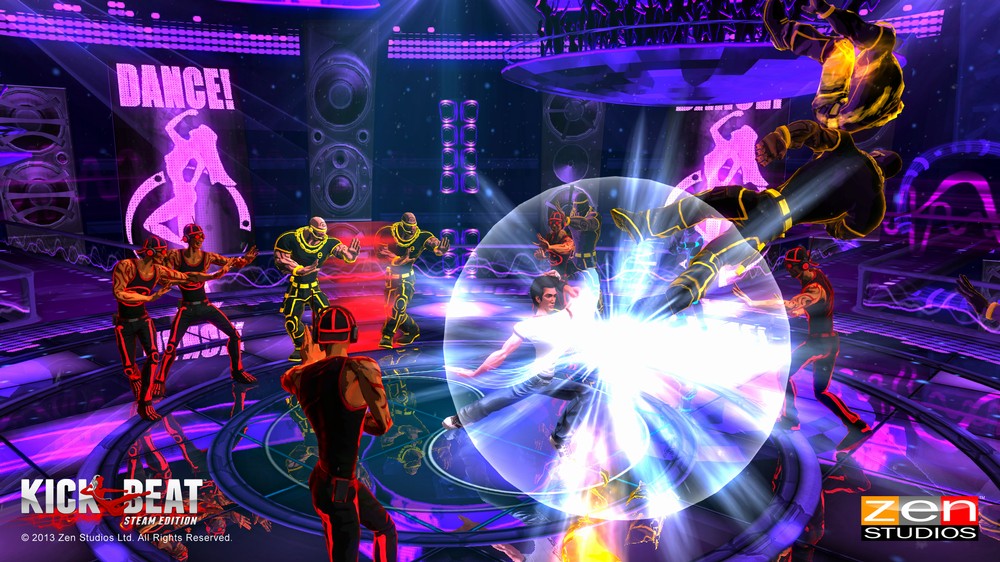 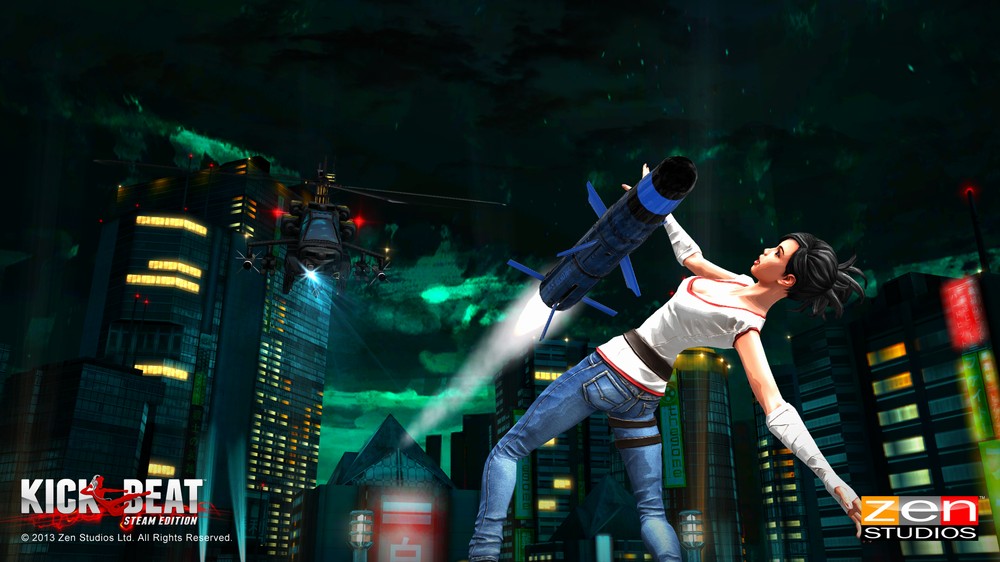 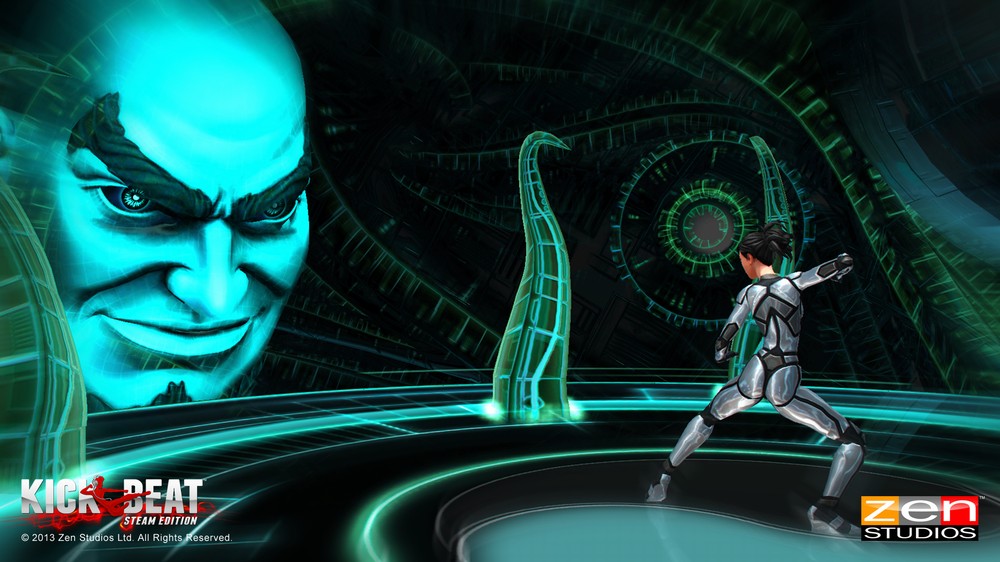 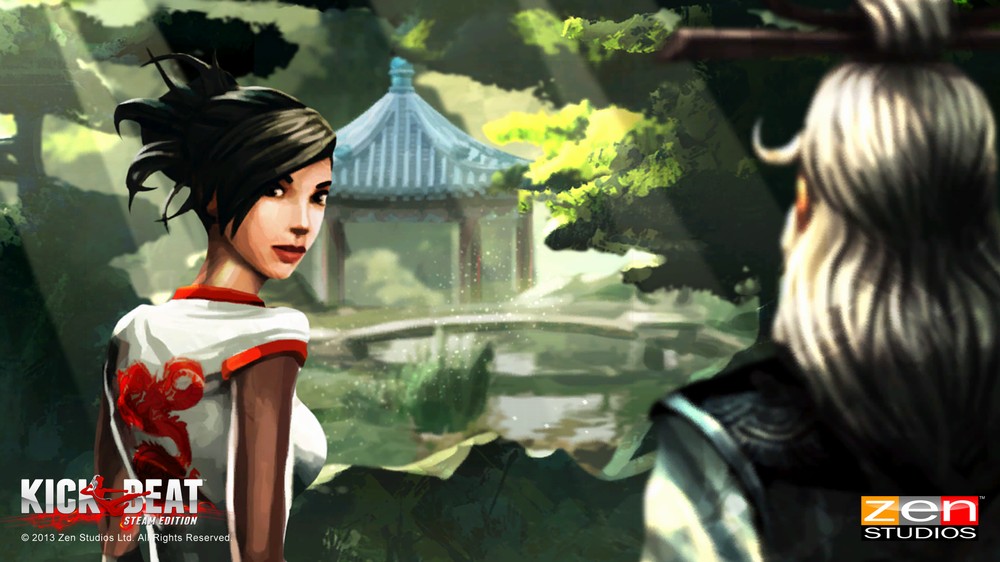 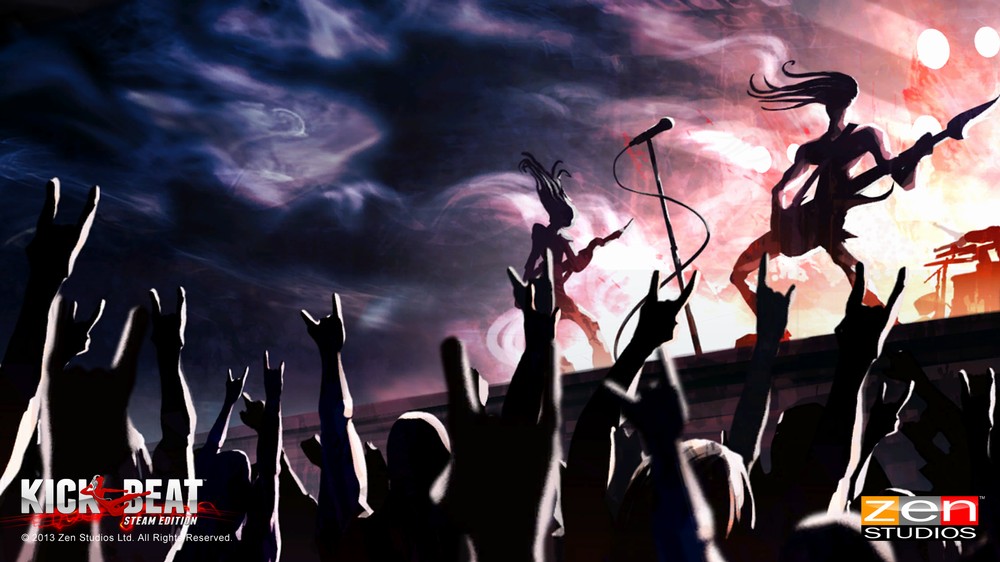