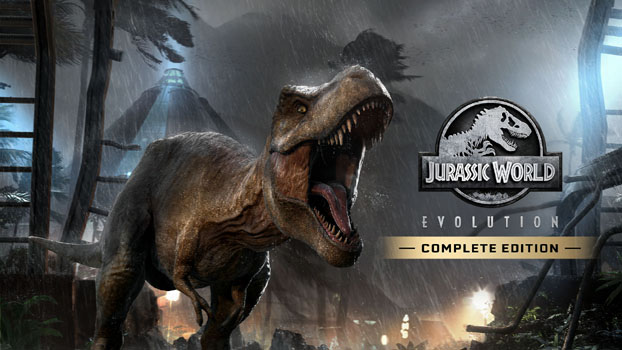 + Detailed and various avenues to pursue in order to construct a truly unique, living and breathing dinosaur park.

- Core gameplay can get repetitive.

Great park tycoon style game set firmly in the lore of Jurassic World with an inherently fun twist on “failure” that most games in this genre fail to attain.

There are a lot of games out there that have you managing parks or cities or businesses or other institutions of one kind or another. Put “Sim” before something, or “Tycoon” after something, and there have been any number of games that have given the player the power to construct and manage the daily workings of many different things. There have even been other games that have simulated running a dinosaur park. However, Jurassic World Evolution is the only game that allows you to build and manage a park within the lore of the Jurassic Park/World franchise and enjoy all the different aspects of that world that you’ve grown to know through the movies.

Jurassic World Evolution: Complete Edition is out now for the Nintendo Switch and it gives Switch owners a chance to play the game with all of its addons and DLC right out of the box. Though the Switch is a less powerful machine than the other current gen consoles, the port of Jurassic World still looks and runs very well on the Switch. Clever uses of blur and levels of detail shifts, I think, are what help the game run as well as it does on the Switch, even in handheld mode. 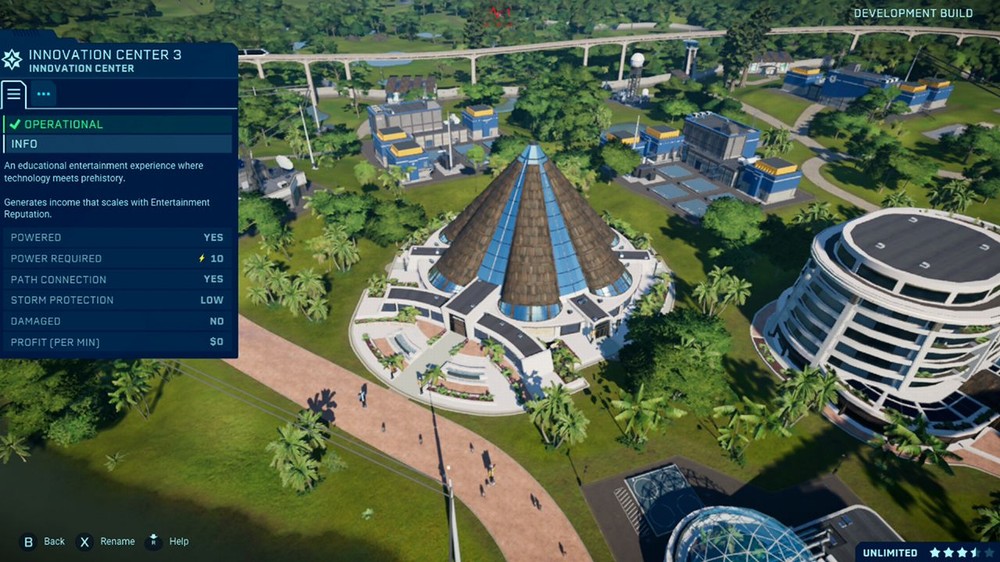 You’ll start the game by going to the first of five islands in the Muertes Archipelago called Isla Matanceros, where you’ll be given the basic beginnings of a park and the funds and guidance (through contracts) to get the park off the ground and start attracting guests. You do this by building the various facilities needed to research, incubate, house, and control the dinosaurs that you’ll be creating for the park, but also the hotels, restaurants, bathrooms, and network of roads and power that will allow patrons and employees alike to traverse the public areas of the park.

You’ll also need to constantly be seeking out new genetic data to breed as many of the 68 available dinosaur species available in the game by sending dig teams to various parts of the world to find fossils that you can use to extract the genome information from. The more complete the genome you have, the more likely your dinosaur will be of reaching full incubation status.  Keeping an eye on each and every dinosaur and their needs is also important. You will need to keep them fed and healthy or else they will become much more difficult to manage. Accidentally putting carnivores in with herbivores is also inadvisable, unless you want your guests to witness a very expensive massacre. 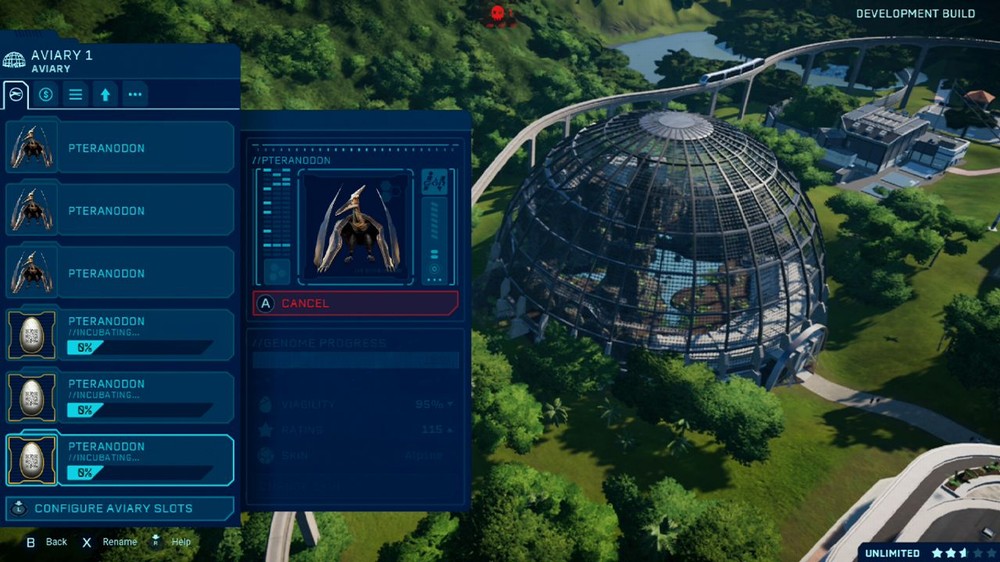 Occasionally, forces outside of your control will affect your park as well. Extreme weather can cause electrical outages that will then weaken your ability to contain your dangerous species, sometimes resulting in their escape into the public areas of the park. Guest deaths will happen, but having units on the ready with the necessary equipment to mitigate such a disaster is part of any good park manager’s contingency plan. You will have the ability to dispatch helicopters that you can then take control of, flying them toward the escaped dinosaur and then shooting them with tranquilizer darts to disable them. You can then send in another helicopter to pick up the unconscious dinosaur and take it back to where it is supposed to be.  You will also be able to explore the parks in the iconic Jeep Wranglers and Ford Explorers from the movies, as well as being able to build and control the Gyrospheres. These unlock at later stages in the game, but it is definitely worth the effort, as they are a very cool way to be able to experience the park that you’ve spent so much time managing.

Frontier Developments is no stranger to park management games, and they have brought all of that experience to bear on this game. There is a lot of freedom given to the player to build the game in the way that you envision your perfect dino park and the more you do, the more challenging it becomes to maintain everything without losing control. But, even when that happens, when a dino breaks out of its enclosure and starts wreaking havoc on the guests, it’s an awesome moment in the game, because you feel like you’re re-enacting moments from the movies. It’s almost like that’s when the game evolves from a park management game into an action adventure game of your own design. 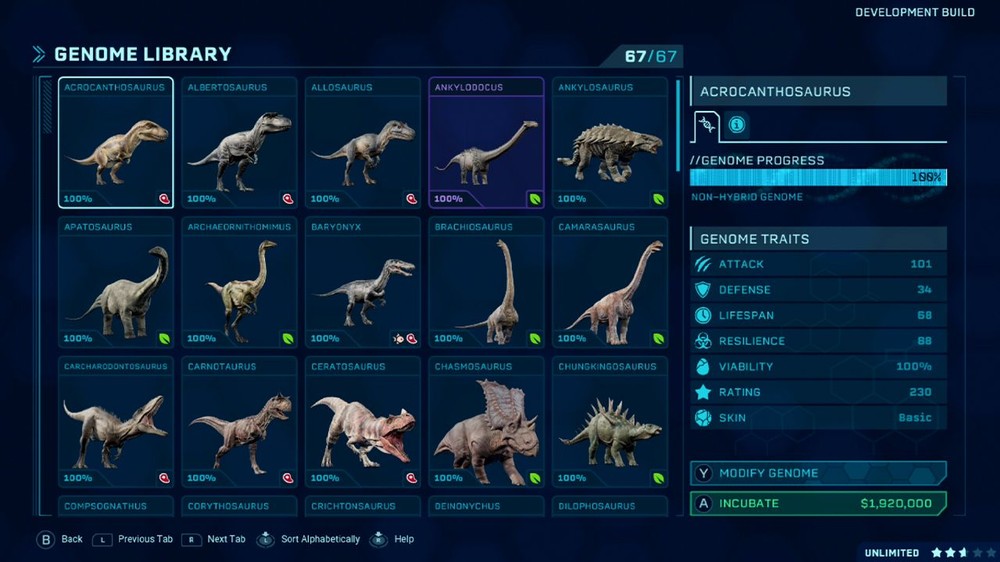 The Complete Edition for the Switch really brings a lot of depth and detail to the game. There are so many different dinosaurs to breed, with genetic modifications that you can research to try and make them even more unique, plus the various locations that you can unlock to build your different parks, that the game really seems pretty limitless. There is a campaign mode that will kind of walk you through the basics and get you going on the path toward success, but there are also sandbox modes that you can unlock that allow you to really get creative with how you play the game.  I think the only real downside to the game is that at its core, there really is a bit of repetitiveness to the way things go, but this is overcome by the sheer number of variables that you will end up introducing that interrupt that loop and send it off on strange new tangents as you go.

Usually, sim tycoon type games end up boring me, or frustrating me because you’ll spend a lot of time working on making something and then it either gets destroyed and you feel like all that work was for nothing, or it’ll work really well and you just kind of sit back and watch for a while until you decide you want to do something else. With Jurassic World Evolution, I feel like you’re always having to stay engaged with the park in order to keep it running smoothly and if/when something does go wrong, it isn’t a feeling of “game over” it’s more a feeling of “we’re doing this now” and you shift gears into containment mode. It’s quite an interesting twist to the tried and true format of this genre of game, in my opinion. 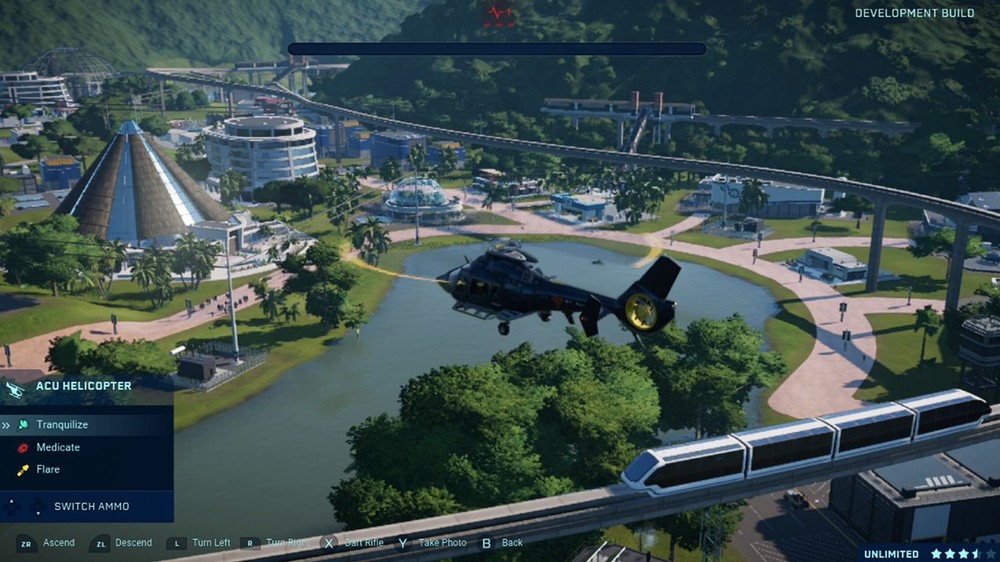 The fact that you get to breed and see these legendary creatures up close and watch as they go about their daily lives (which, the AI for the dinosaurs is really quite impressive to watch, as they roam for food, fight, evade, ect) is pretty awesome all by itself. But then, you get to take the happiness of the visitors into consideration and work on building an interesting, engaging park that people want to come to, as well. All the while, you’ll be taking contracts from the different divisions of the park (Science, Entertainment, and Security), all of whom have different ideas on how to make the park the best it can be. You’ll have to choose who you think has the best plan, or try and find some happy balance between all three. These, and other characters from the movies are voiced by their original actors. You’ll even hear Jeff Goldblum, Sam Neil, and Laura Dern return as the voices of their characters at various parts of the game.

All in all, I would say that I was pleasantly surprised by Jurassic World Evolution: Complete Edition on the Switch. I think it’s a great game, especially for the Switch, as a game like this lends itself very well to be played in handheld mode while you’re on a road trip or watching something on TV at the same time, or whatnot. It’s an involved game, but you don’t have to be staring at it non-stop, either. Sometimes, you can just sit back and let the park go through it’s day and hope that the electric fences hold.