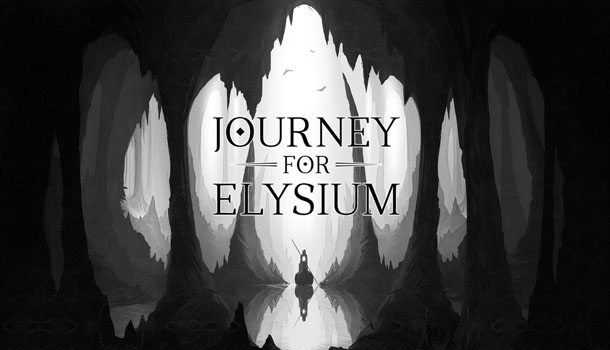 One of the most immersive VR adventures of 2019.

Journey for Elysium is one of those 3D adventure games that you could just as easily play outside of VR, but once you experience it in all its virtual immersive glory you would never want to play it any other way. Blending first-person exploration, puzzle-solving, and a fantastic backstory rooted in Greek Mythology, fans of any of those genres are going to find pure bliss in this haunting adventure. You’ll be playing an unnamed hero; the scourge of your town, known to all as “the bastard”. Seriously, get used to hearing that word because it is used heavily in the first 60-90 minutes of the game.

After a brief tutorial on how to move and grab stuff you can venture into your first scene. In this game you are dead; trapped in the dismal and colorless Underworld where only objects with which you can interact will illuminate with a golden glow. Your spirit guide will lead the way, unlocking a series of broken memories that require completion before moving on to the next. Memories first require unlocking by finding gold coins scattered around the immediate area. Once unlocked these memories unfold as a series of ghostly encounters; like glowing mannequins constructed from shimmering golden particles. You’ll listen to the story and often be required to solve a puzzle or find and restore a missing piece to the diorama to unlock the key to proceed. 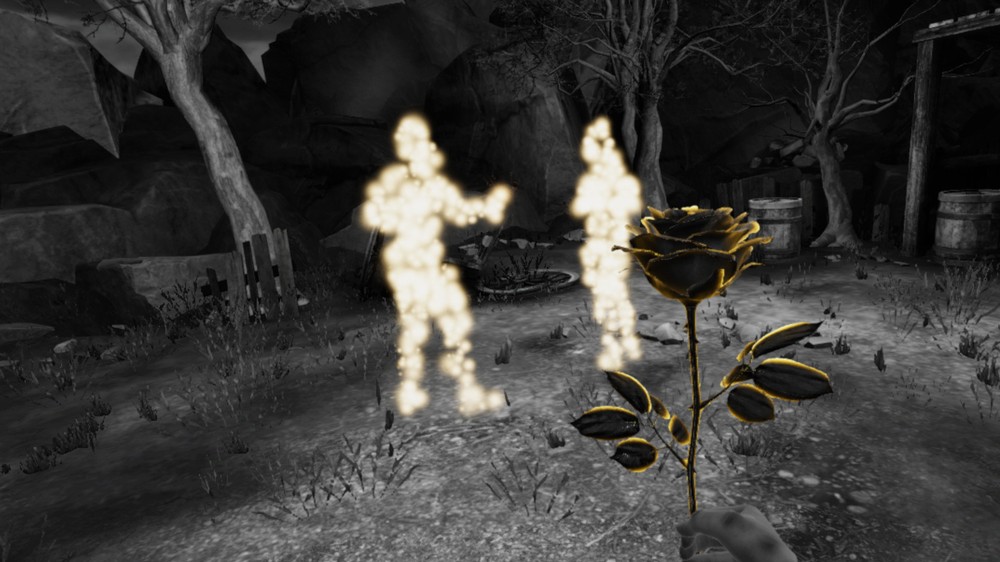 Much of the adventure takes place on the River Styx where you will find yourself actually rowing yourself with some genuine kayaking motions with both hands that are used to grip the twin-bladed paddle. As someone who kayaks in real-life this felt incredibly realistic and I was able to reach top speed and steer like a pro – not that there are any skill challenges for doing so. You’ll mostly paddle your way down the river, stopping off at various landing areas to solve puzzles so you can keep on rowing deeper into the Underworld.

Excursion on the shore will require solving pattern puzzles or merely navigating the environments’ climbing ladders and chains with realistic hand-over-hand movements, shimmying along ledges on walls, and interacting with any parts of the environment that happen to be gold and glowing. Controls are awesome. I played on both the Vive and the Rift S and while the Oculus Touch feels better and responds better than the Vive wands, both motion controllers get the job done. Considering the amount of physical interaction I totally preferred the Touch controls; especially when it came to the archery portions of the game. 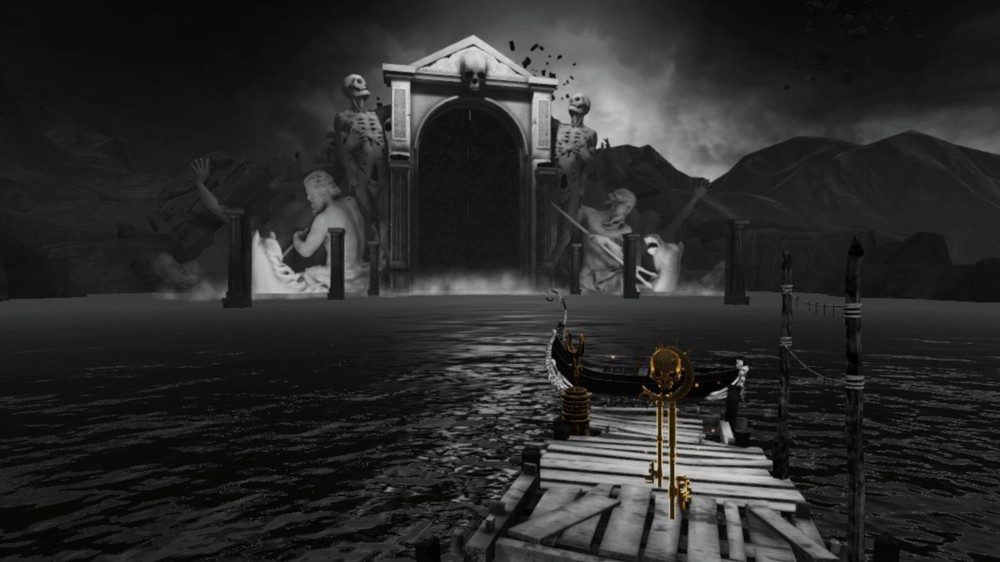 The Rift S offered a slightly better image than the Vive with sharper visuals and less screen door effect given the darker nature of the game. I was disappointed in the lack of settings, both for controls and graphics. You can toggle smooth-turning on but the speed is super-slow with no way to change it, so I ended up opting for snap-turning, which is always disorienting for me. I also would have liked some rendering scale options since I am pretty sure this game wasn’t tapping half of my graphical hardware.

The art style really sells the otherworldly experience of Journey for Elysium with its intentional black and white design inspired by the paintings of Gustave Doré. Mere moments after casting off in your boat you’ll see a giant T-Rex skeleton to your left, and if you look back you’ll see a massive gate flanked by two demonic skeletons. Perhaps the most sinister element of your Styx journey are the ghostly faces and palms floating in the water pressing up against the surface. Your spirit guide will lead you to these memory fragments that play out almost like a slideshow accompanied by lengthy audio narration where you will learn more about your past leading up to your death. The visuals are hauntingly effective with these shadowy creatures watching you from the banks, and these majestic temples and towering stone statues. The attention to detail is magnificent.

You can probably finish Journey for Elysium in less than three hours, which is rather short for a $20 game, and with no hidden items or collectibles there is no real reason to replay this heavily story-driven and linear game once you’ve finished it the first time. That’s not to say you won’t get $20 worth of fun playing it, but if you are one to judge quality by quantity then you might want to wait for a sale. Otherwise, I found Journey for Elysium to be a totally awesome VR experience, full of style and engaging storytelling that had me on the edge of my seat (yes, you can play seated) the entire adventure. This is easily one of the best VR adventure games I’ve played this year. 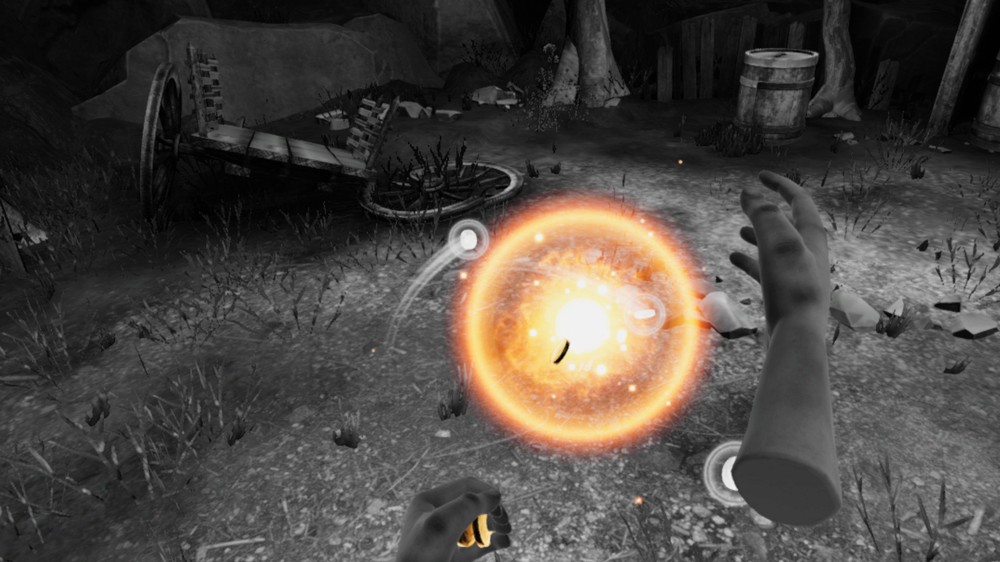 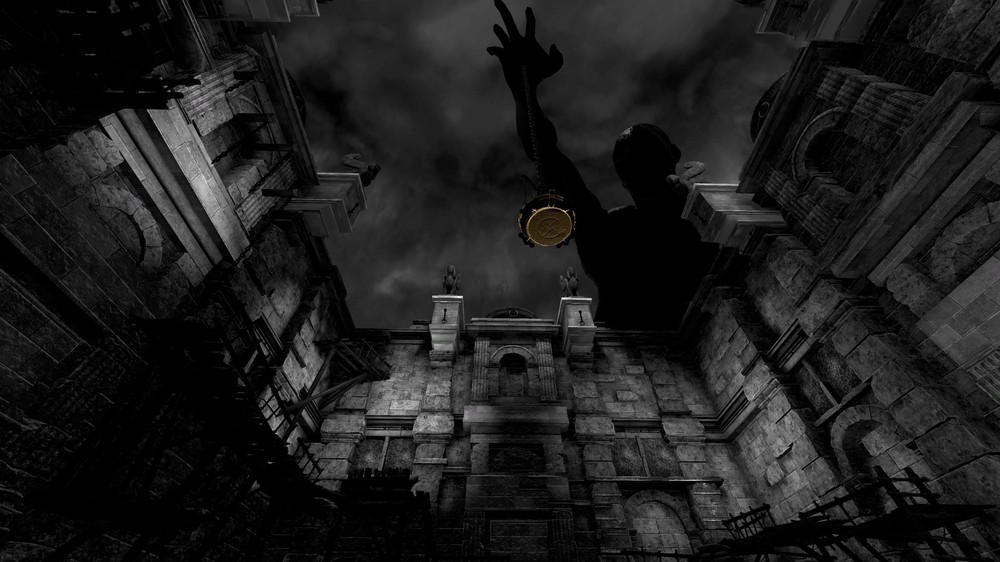 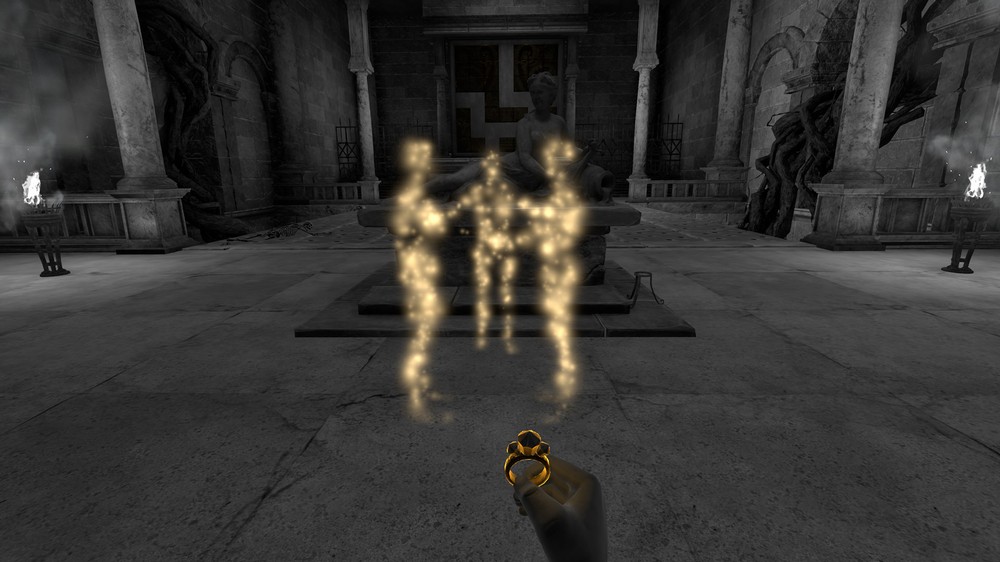 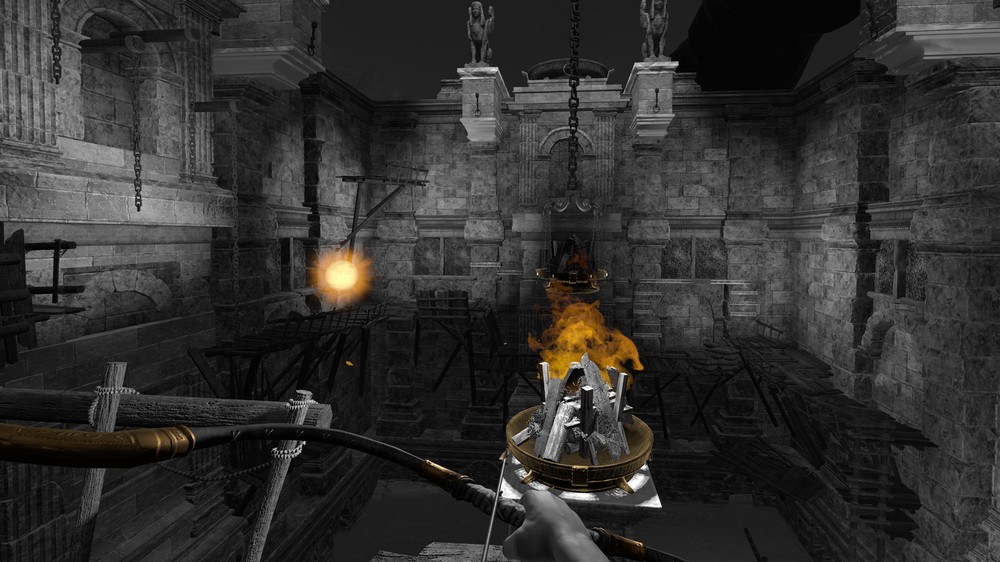