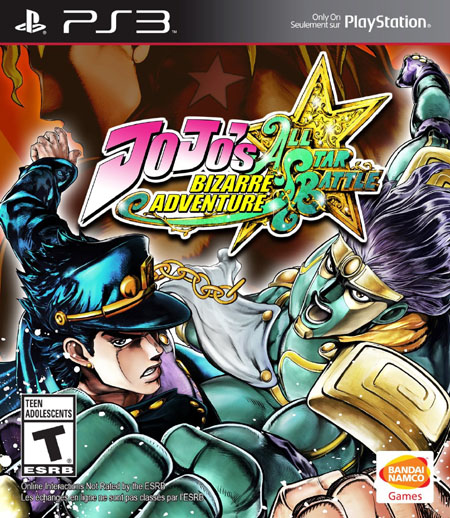 Spot-on visuals, brilliant animations, and a sense of authenticity that's almost unheard of in licensed games.

Fans of the manga or anime are practically obligated to pick up this beautiful game.

Jojo’s Bizarre Adventure is one of the greatest, most influential manga ever made, a story of adventure and friendship, revenge and mystery, being written continuously since 1987, and probably something most people have never heard of, unless they’re a gigantic turbo nerd, or they played the Capcom fighting game adaptation of the third series. Being in the turbo nerd camp, I was ecstatic when I found out that CyberConnect2 was making a love letter to the fans of the series.

For the uninitiated, Jojo’s Bizarre Adventure is an action comic about the descendants of Jonathan Joestar, told in eight parts, spanning more than a century and multiple timelines. It’s an epic that defined genre conventions, and has told stories ranging from cross-continental road trips to mysteries set in a small Japanese town. Jojo’s Bizarre Adventure: All Star Battle manages to cover the entire breadth of the series. While there are some weak spots, it’s still an amazing tribute to a beloved comic.

First off, the game looks beautiful, like manga in motion. The high fashion-inspired character designs come through, giving us a game full of fabulous musclemen and handsome women, with all the wonderfully garish color they had on manga covers, and the animations for movement and attacks are all pulled directly from the manga and recent anime, from Will A. Zeppeli’s strange prancing walk to DIO’s Road Roller super. There’s a degree of authenticity here that I haven’t seen in any other licensed game. 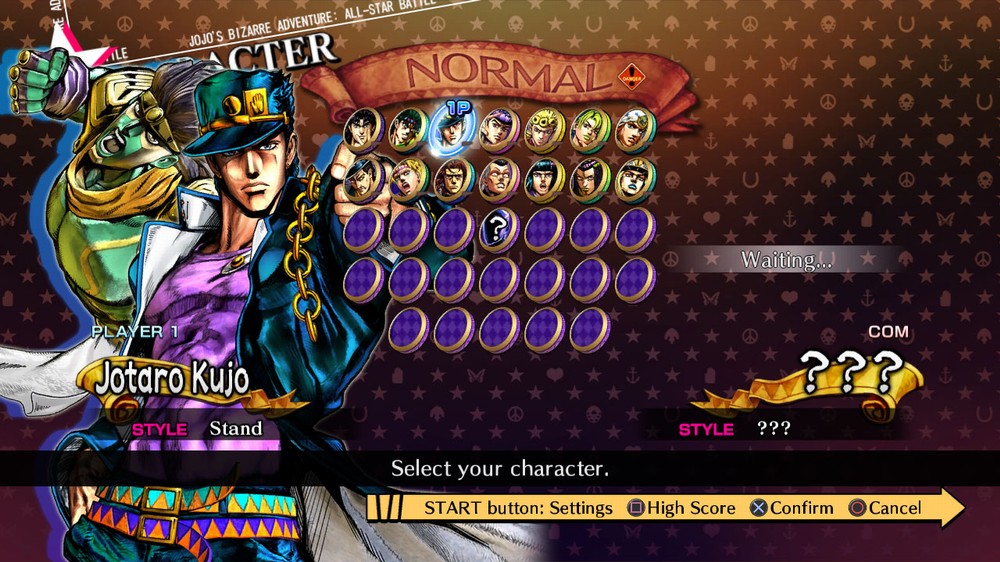 For fans of the comic, the characters are a treat. Almost every character move is drawn from the comics, and the more esoteric powers are presented faithfully, albeit a way that works in a fighting game. One character is able to edit memories and personalities, and will prevent opponents from fighting back for a short time. Another can unravel her body into metallic string. Yet another is able to accelerate time until the universe ends. All of these are represented faithfully in the game.

All the authenticity in the world, though, won’t protect the game from its shortcomings, or mean a whole lot to people who aren’t already versed in the comic. The gameplay is fairly simple, focused more on the spectacle of the moves and the personality of the characters than fast, complex gameplay. It’s very much a casual fighter, and fans of more intense, technical games won’t find an awful lot of depth to scratch. There’s a huge amount of variety, with horse-riding characters, pillar men who can enter elemental modes, stand-users and solar-powered martial artists, but it’s definitely a broad game rather than a deep one. I still enjoyed the combat, but then, I’m hardly an expert in fighting games and I just liked seeing these characters punch each other.

The game’s story mode will satisfy nobody, with cliff notes version of storylines that turn a thousand pages of comics into three fights and two dozen short paragraphs of exposition. It’s practically designed to confuse newcomers, and old hands at the material will find the abbreviated stories a pale shadow of their original forms.  The production values are especially disappointing, as a story trailer that Namco Bandai put out was actually more visually impressive and immersive than what we got. One bright note is that it was definitely localized by fans of the series, and references to infamous lines that have since become memes among the American fan community are present. Dio Brando still wants to know how many breads you’ve eaten in your life. 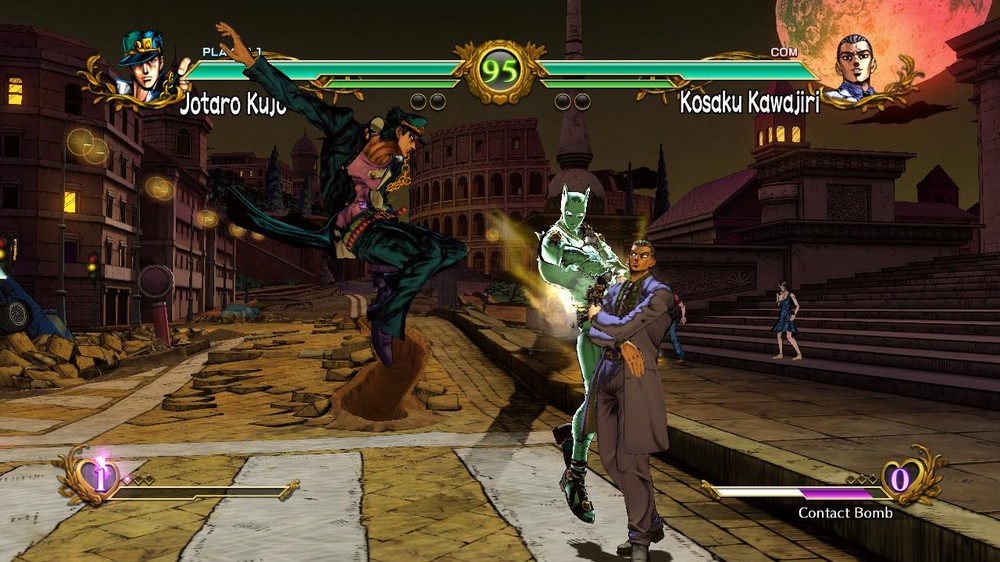 Meanwhile, the campaign mode, while made less egregious than its original form, is still a good idea weighed down by bizarre, out-of-place microtransaction formula. You pay energy, which recharges every two minutes, to search for bosses and amplify your damage against them. Along the way, you fight avatars, computer-controlled opponents based on the play patterns of other players. When you beat a boss or an avatar, you get medals that unlock new costumes, taunts, color combinations, win phrases, and more. It’s a great way to unlock new stuff for your favorite characters, but I can’t imagine people staying with it for very long, and the microtransactions to buy more energy and stat boosters seem predatory. While I didn’t have any issues with the online features in campaign mode, when I played online versus, some matches were outright unplayable.

One particular nitpick was the change in name for several characters and powers. In order to play it safe, the localization team decided to change a lot of the original names, which were almost all references to songs and musicians. It was probably necessary, but little things like changing Killer Queen to Deadly Queen, Gold Experience to Golden Wind, or Dirty Deeds Done Dirt Cheap to Foul Acts At A Reasonable Price takes away from the atmosphere of the game. It’s hardly the localization team’s fault, but it’s still sort of a bummer.

Jojo’s Bizarre Adventure: All Star Battle is a game that lives and dies by recognition of the source material. I was overjoyed when I was playing with characters I know, and slightly confused and put off when playing with characters that were unfamiliar to me. For fans of the series, it’s a tribute to what might be the best long-running manga ever made. For people unfamiliar, it’s remarkably opaque and doesn’t do much to extend a hand. I loved it, but then, I’m part of the pretty narrow target audience stateside. For people who aren’t familiar, it’s still a beautiful game, with good music and a vast selection of characters. Fans of the manga or anime are practically obligated to pick this up. For everyone else, it’s probably better to read the comic first, before diving in to All Star Battle, and feel free to take a point or two off my rating until you’ve been fully immersed. 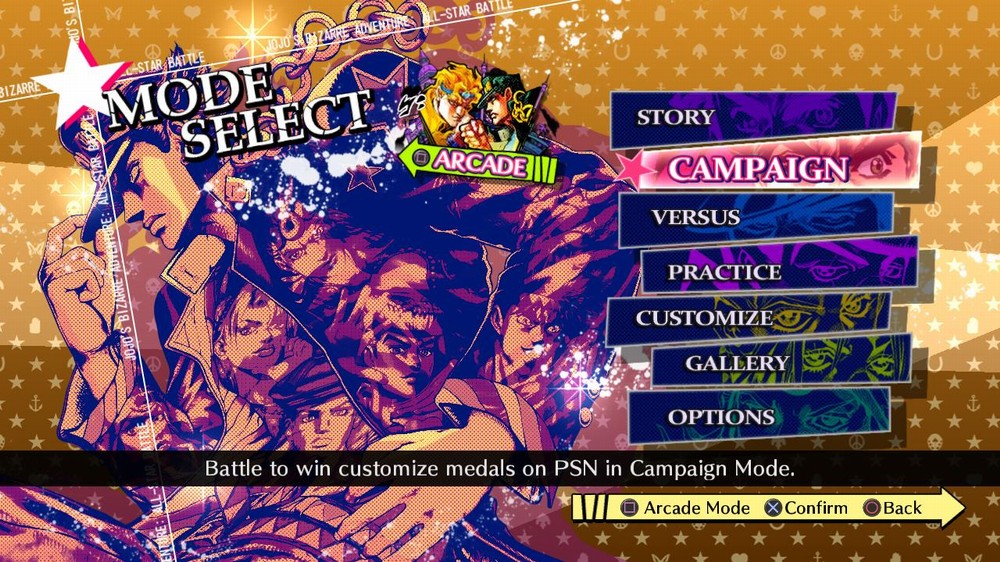 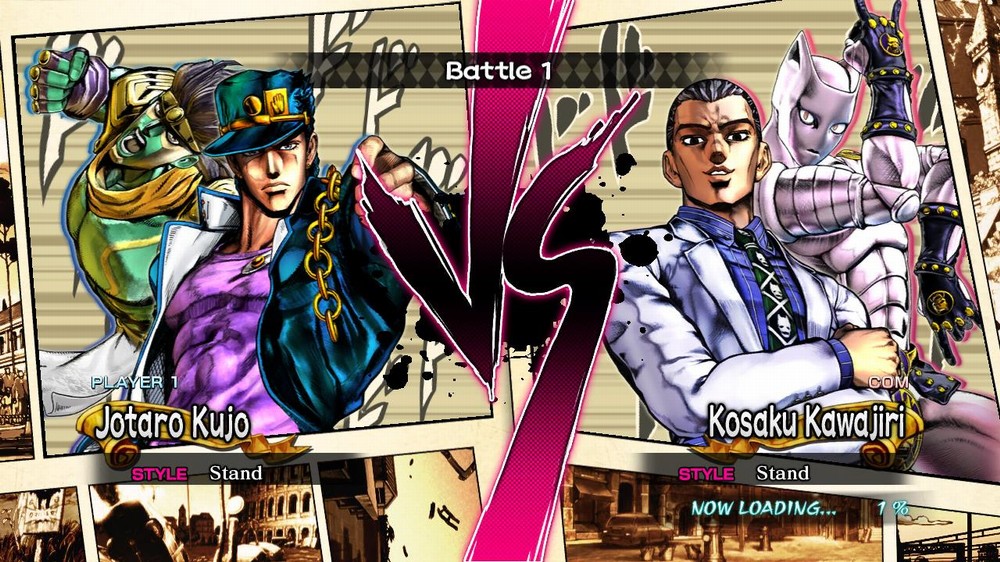 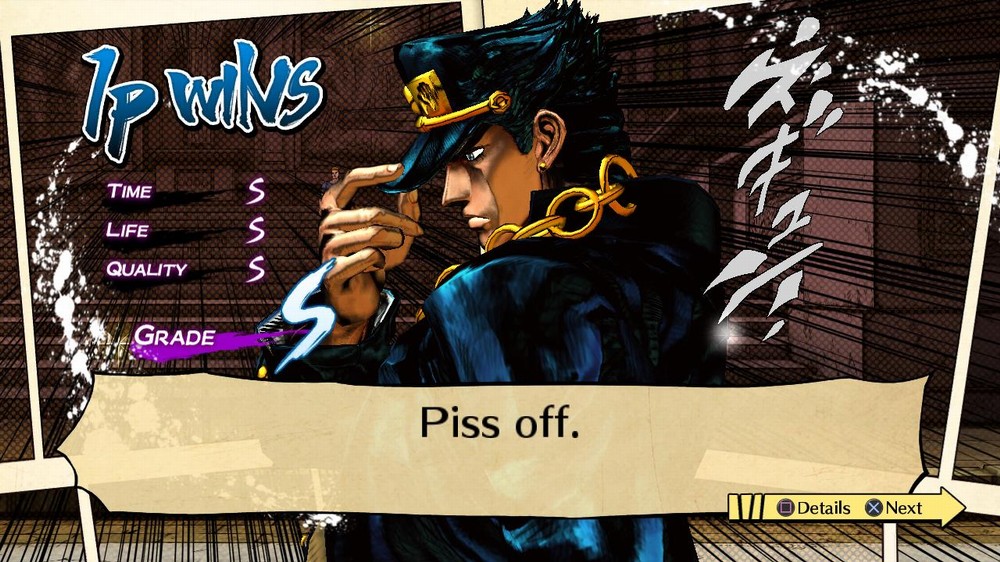 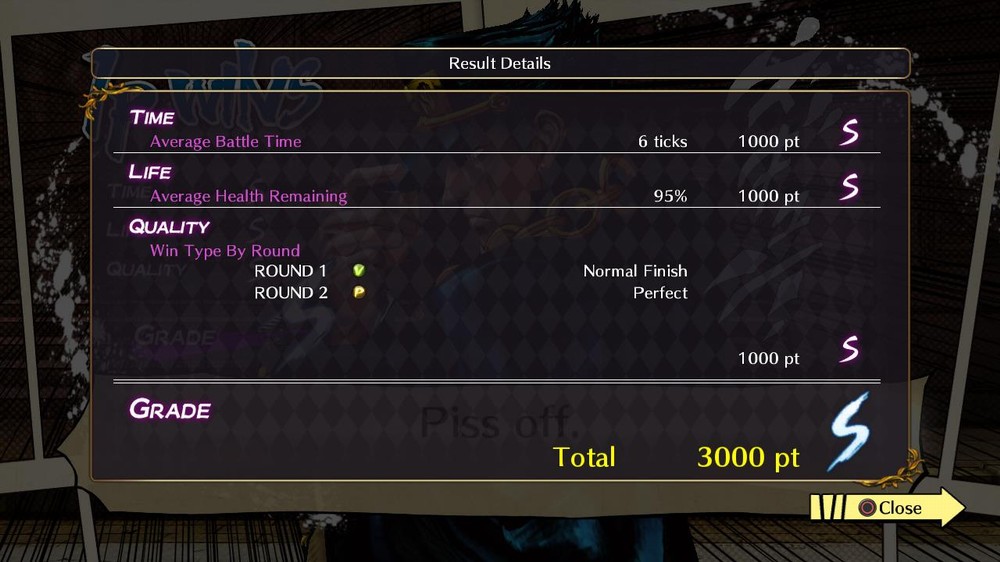 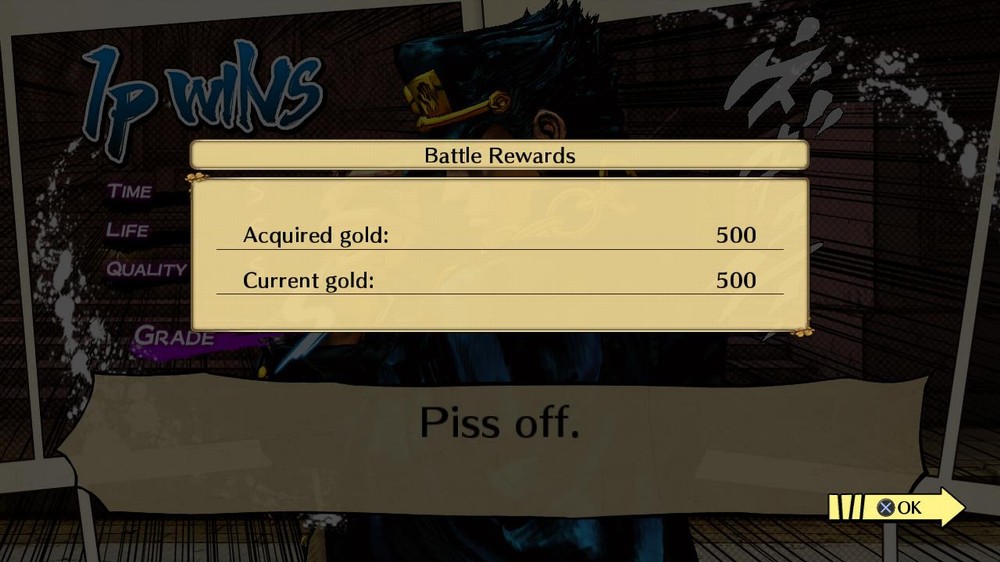 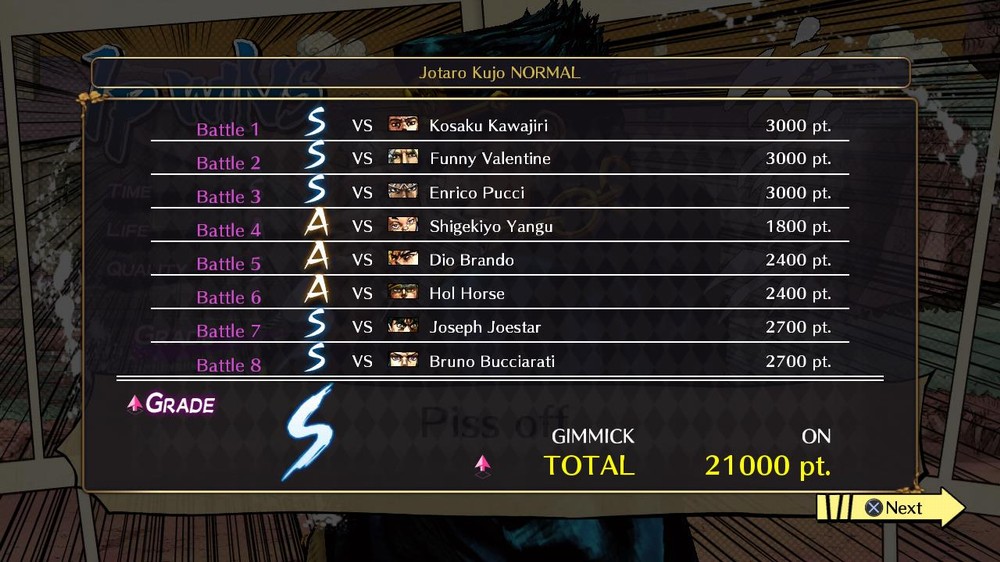 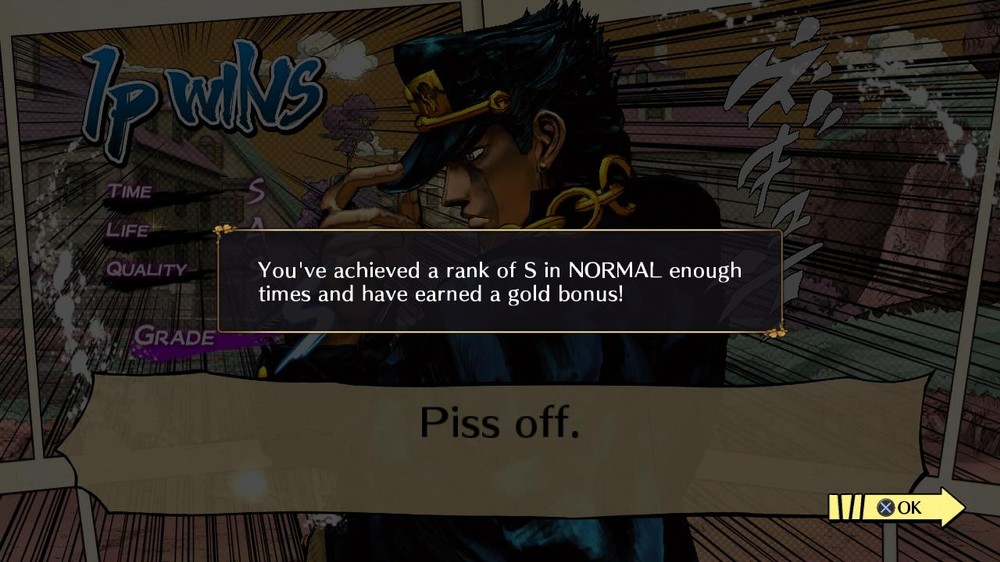 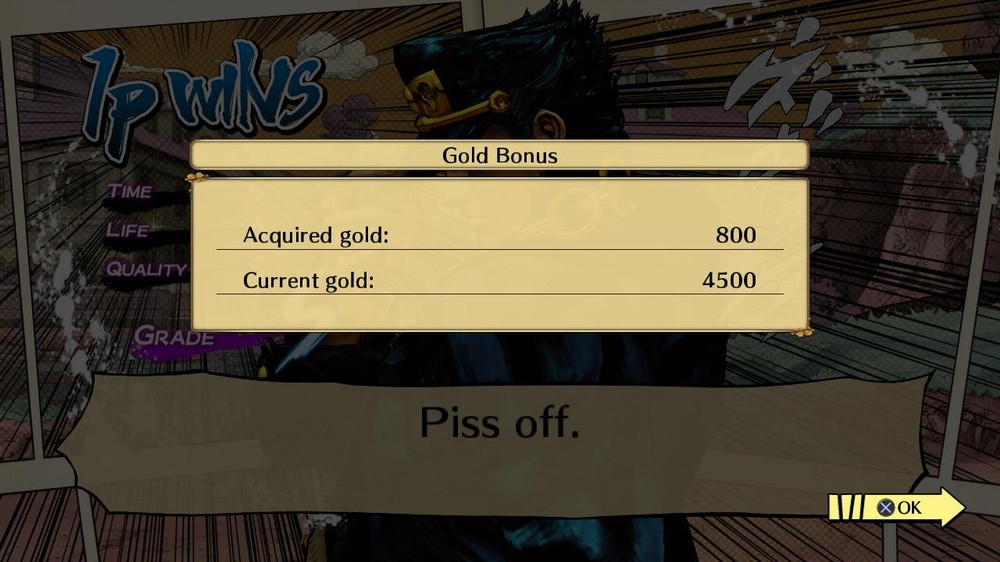 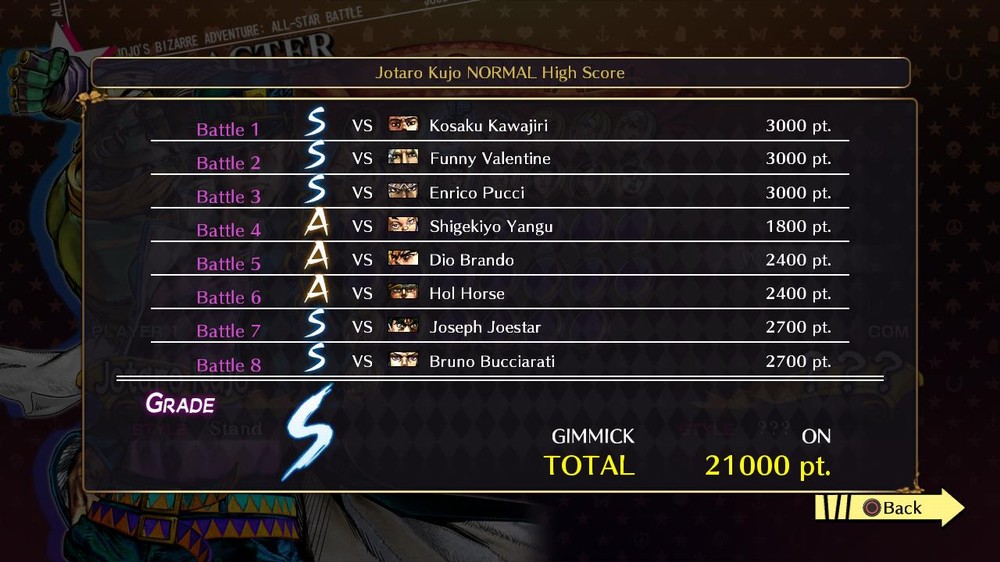