A rather clever mix of game genres that works on so many levels.

There’s always something about mecha that I’ve always enjoyed. It doesn’t matter if its mobile suits or lumbering war machines there is something extremely pleasing about controlling these machines. What I never expected was how much fun I would have controlling one with a Match-3 gameplay mechanic. Such is the case of indie developer Dreadbit’s newest venture with the release of Ironcast for the Nintendo Switch.

Ironcast gets massive brownie points right off the bat from me for being set in an alternate history of 1880’s Victorian England and being steampunk. Fans of Wells and Verne will feel right at home with this healthy mix of puzzle, roguelike and turn-based combat style gameplay. The story of Ironcast follows a war between the British and French during the year 1886 over a new clean energy source called Voltite. This French created wonder has created a great war after they refused to share it and the British stole samples of it. The result…Ironcasts. 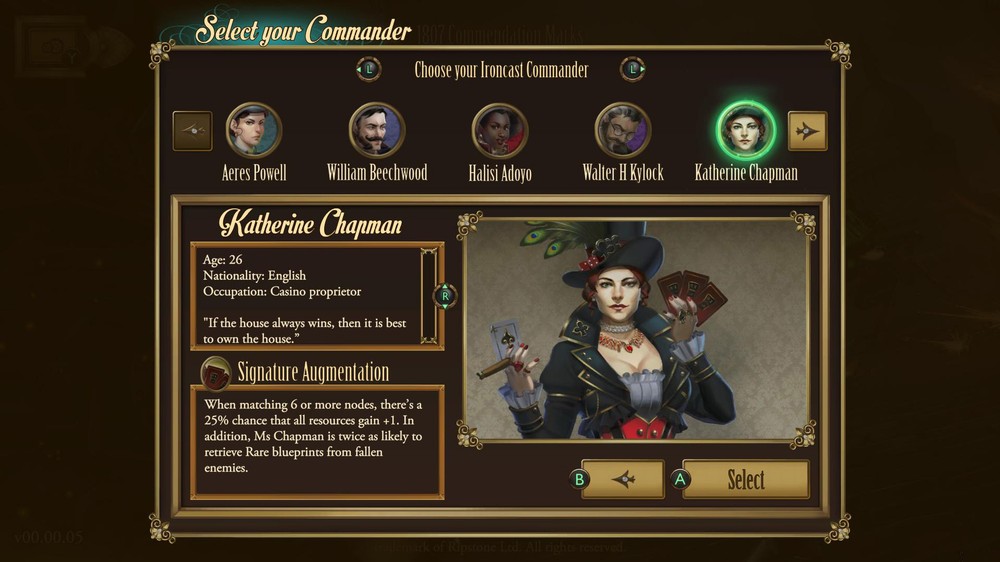 These towering Voltite powered mecha called Ironcasts are the main basis of the game, where you a British commander of one such Ironcast. Players get a pretty good basis of how things work right from the start after you survive an off screen attack. Ironcast is primarily a turn-based strategy that uses a match-3 gameplay system to power your mecha. Ironcast isn’t the first game that features match-3 as a mechanic that I’ve played but it’s definitely my favorite to date.

Each mecha is divided into 4 main areas of operation: weapons, drives, defense and repair and each one requires a combination of resources to be functional in combat. This is where the puzzle element comes in. You are presented with a 6×6 grind of various colored nodes. Each one represents one of the four main resources: ammo, energy, coolant and repair. During each of your turns you are allowed two matches. Each of the nodes connected in a chain add one point to that categories resource. Things get interesting as I mentioned above as for instance your weapons require ammo and coolant to fire so strategy is definitely a key component when planning your next move. 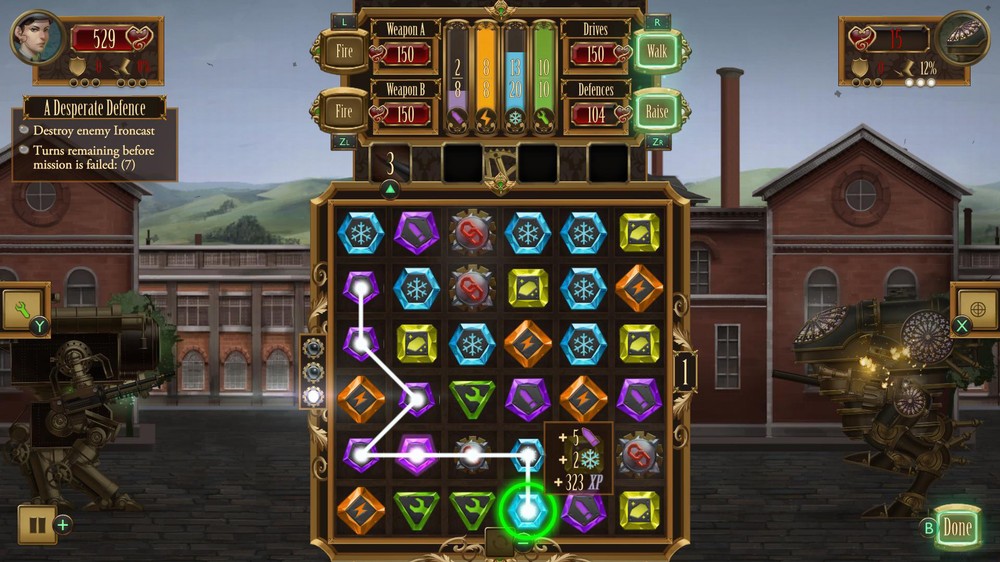 Add to the fact that the missions themselves often have a requirement that must be met to win. An interesting one I liked was where you have to survive against attacks from enemy waves while keeping your coolant level above 10. There are abilities specific to each pilot or Ironcast that can make this easier like the ability to swap all scrap nodes for coolant for instance. If you lack those abilities then it’s all about making the best out of the pieces on the board. There are truly a lot of different options to utilize in Ironcast so the process of making it from moment to moment is never stale.

There are other nodes that are useful including the ever important yellow node long term resource called scrap and on the imminent front link and neutral nodes. The neutral node allows you to use it as another color if there is a gap between colors in a desired path. This is useful not only because it nets the player more resource points but also because some pilots have perks that favor long node chains. The link node on the other hand is invaluable as it allows you to link two different node color chains together in a single match. 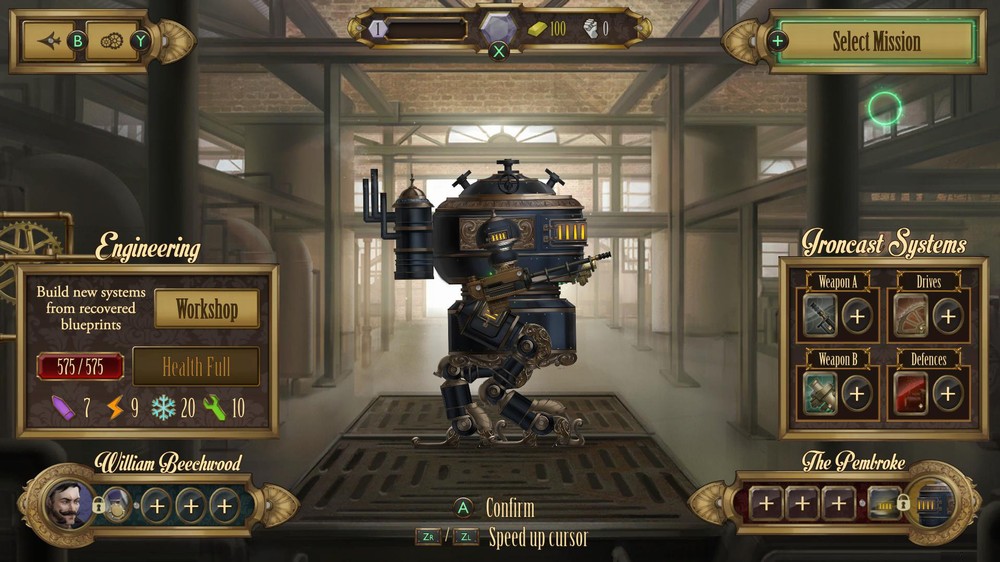 Players must plan and balance each of these resources with every turn to decide just how they want to defeat their targets. Optimally you want to take the enemy forces out in the shortest amount of turns but how you do it is up to you and the luck of the node drops. You can choose to focus on their drives which will prevent them from moving making them easier to hit or you can go for their guns making them defenseless. You can inspect each enemy and even target specific systems to achieve your goals which is pretty awesome.

Ironcast is a title that drives home that every decision you make even when the choices aren’t great matter. This is especially true with the looming shadow of permadeath driving your every decision to succeed and survive. That’s right permadeath. If you go down at any point you get kicked back to the main menu to start all over again. Though this sounds brutal and may put some folks off, Ironcast excels at being about progression. For every 5,000 points of XP earned you are rewarded with a Commendation Mark that can be redeemed. These allow you unlock new pilots, Ironcast and even abilities to make future runs a little easier. 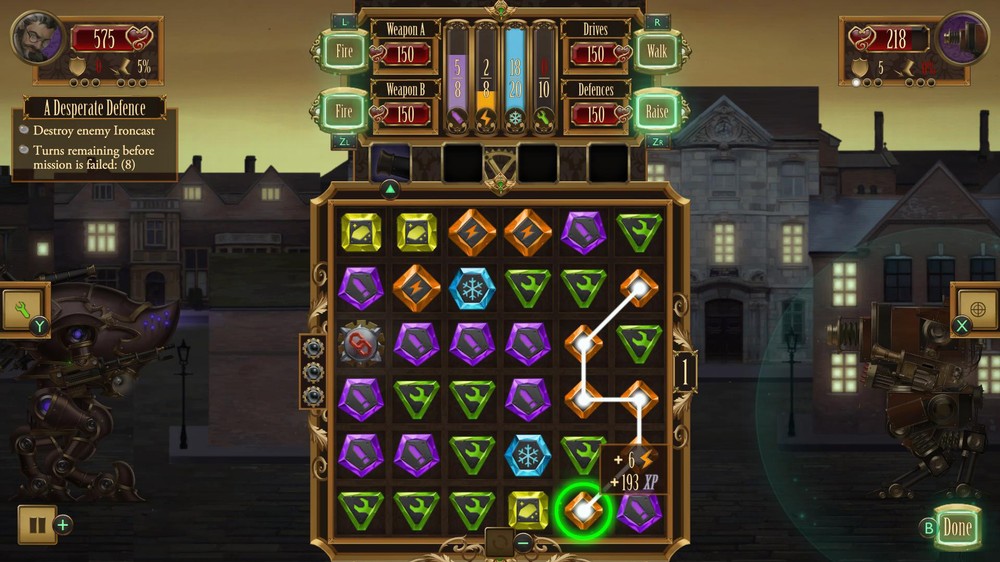 Another thinks about Ironcast is that win or lose the missions that you choose are randomized except for the boss. You must complete nine missions before the boss. This gives you time to prepare for France’s main attack after a set number of days. What you do with that time is up to you from the options available. Do you build up resources to afford to build better parts for your Ironcast or do you build up a fighting force? Maybe you’ll find a balance of both. It’s important to note that some missions will not result in a game wipe such as negotiation missions for resources or manpower but it does count toward your total mission count either way. The only true safe place in the game is your hangar bay.

Between each mission, the hangar bay is where you can upgrade, repair and select new abilities for your pilot and mecha as you level up with XP earned from battle. There are a wide range of parts that you can build to reward you with better shields, stronger weapons and even stronger hulls for your Ironcasts as long as you have the resources. Variety of choice is an integral part of Ironcast as a whole and that includes how you actually control it.

The Nintendo Switch’s versatility really lends itself well to the control scheme options for Ironcast’s gameplay so it doesn’t matter if you take it on the go or playing at home on the couch. First up Ironcast does support the Pro Controller for a more console feel which is nice. The next option is with the Joy-Cons separated for a semi-relaxed experience or attached in the handheld mode. Perhaps my favorite option though is utilizing the touchscreen for a more tablet like experience. The touchscreen is only available in handheld mode but can actually be played almost entirely without the Joy-Cons attached save for exiting to the Switch dash. Doing that though doesn’t let you experience the rumble feature in combat that Ironcast also utilizes. 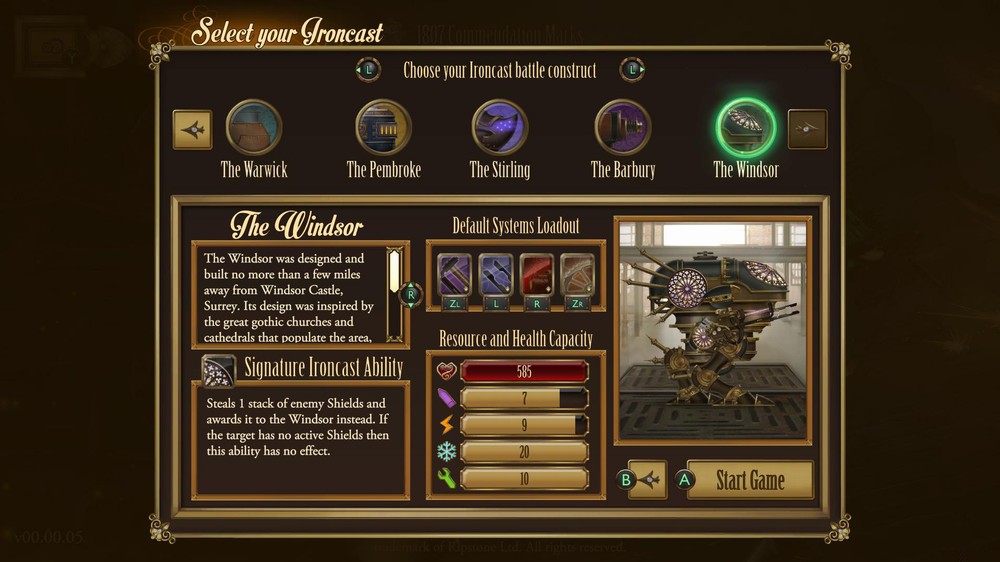 Wrapping up the package is its visuals and sounds both which lend well to the atmospheric war setting. The music gives you the feel of the intensity of battle without being overbearing. The visuals are all hand painted right down to the character stills used in the mission briefs and story elements. The overall visual are pretty downplayed and it only real vibrancy comes for some day missions and the puzzle field in the middle of the screen which looks great on the Switch’s screen. On a TV the visuals are still sharp though some pixilation is present on larger screens even with upscaling.

After all is said and done, Ironcast is a rather clever mix of game genres that works on so many levels. You have the deep aspects of a turned based strategy RPG with the addictive puzzle elements of a Match-3 game all the while with the underlying roguelike structure driving your every move. I had no idea going into this review just how much fun Ironcast would be. If you love strategy and puzzles then Ironcast may be just the thing you’re looking for. With multiple ways to play wherever you are there is no reason not to miss out on this digital download today. 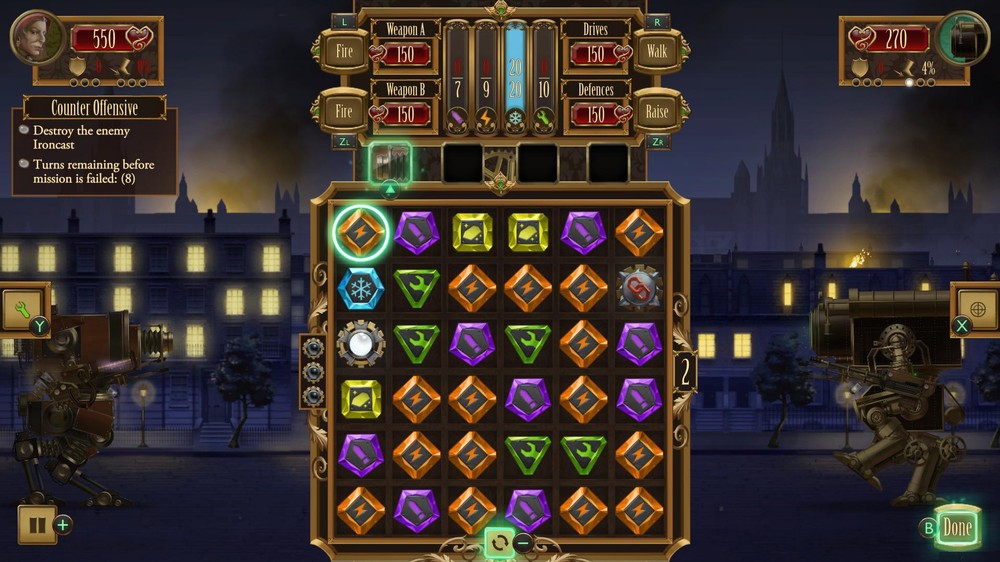 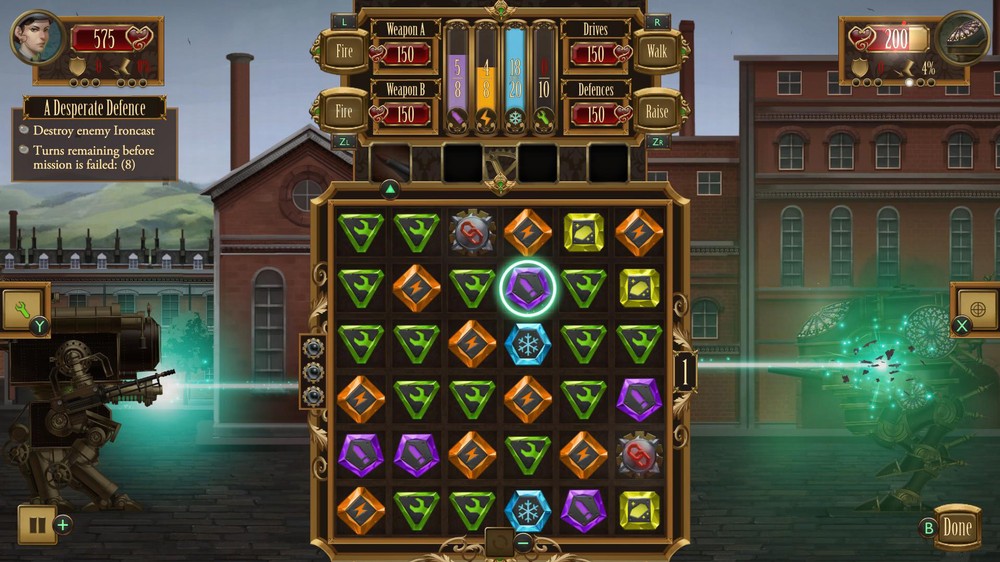