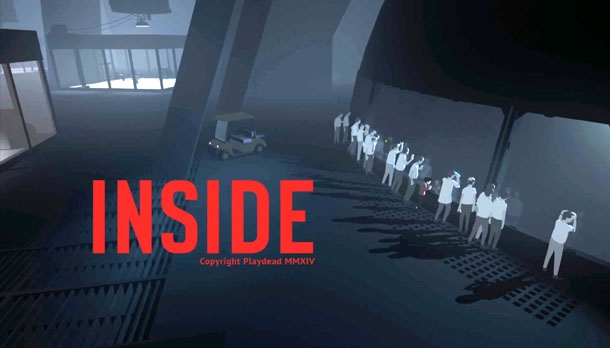 This is one awesome, albeit short adventure.

INSIDE, the spiritual successor to the critically acclaimed 2011 indie favorite, Limbo, has finally released for Xbox One and PC/Steam and the results are as elevated and mixed as my emotions when the closing credits started to roll just four hours after my marathon session began. Much like Limbo, INSIDE is short on setup and story – one could argue there is no proper story at all; just events that unfold leaving you to fill in the missing narrative using your own imagination.

INSIDE expands upon Limbo’s simplistic black and white art style by occasionally tossing in splashes of color to accent its phenomenal 2D-but-looks-3D side-scrolling design. The lighting and shadows are off the chart (shadows become a gameplay device), and while I could make a small comparison in visuals to Deadlight, INSIDE definitely sets a new standard for side-scrolling graphics and visual effects.

The game starts off almost exactly like Limbo; a small boy in the woods with an unknown backstory and an unknown objective other than to continually keep moving to the right (with the occasional backtracking to the left – often to find secrets). It only takes a few screens however before you learn this boy is either very important or very dangerous (or both) as adults are viciously hunting this kid down, and if you aren’t careful you’ll quickly learn why this game is rated M.  Kids don’t get killed in games that often but over the course of four hours this little boy was shot, strangled, drowned, crushed, and ripped apart by vicious attack dogs.  In one of the later stages shockwaves would even disintegrate the boy sending his bloody body parts smashing into your screen. 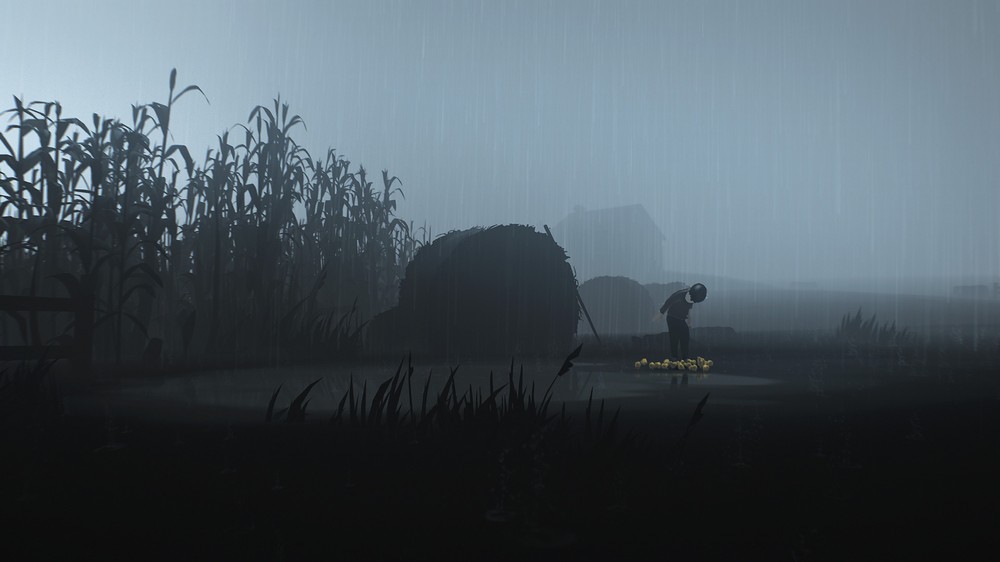 Your ultimate goal is to find out what the adults are doing in their super-secret ginormous underground base, although even at the end of the game it is never quite clear. Running and jumping like a pre-teen ninja, this little boy has some great platforming moves, but the real fun starts when you find these mind control helmets that let you possess any nearby adults who have these slug-like creatures in their body – again, much like the mind-control slugs from Limbo.

Once jacked in, any nearby infected will mirror your moves leading to some of the more delightful moments in the game where packs of “zombies” will hoist you up on their shoulders so you can reach something, or even fling your across giant gaps or catch you when you jump back into their arms. As terrible as the look, these guys quickly become your best friends, which is nice since everything else in the game wants to kill you.

Not all of the puzzles require possession mindless humans. There are plenty of environmental interaction puzzles like moving boxes around or swinging from ropes and chains, flipping switches, and even a very cool underwater level with you in a mini-sub.  The levels, while extremely varied in theme and design, somehow manage to flow together in a seamless non-narrative fashion.  Physics is taken to new extremes with levels that have water suspended above empty space forcing you to find a way to jump up into the water so you can swim to your objectives. 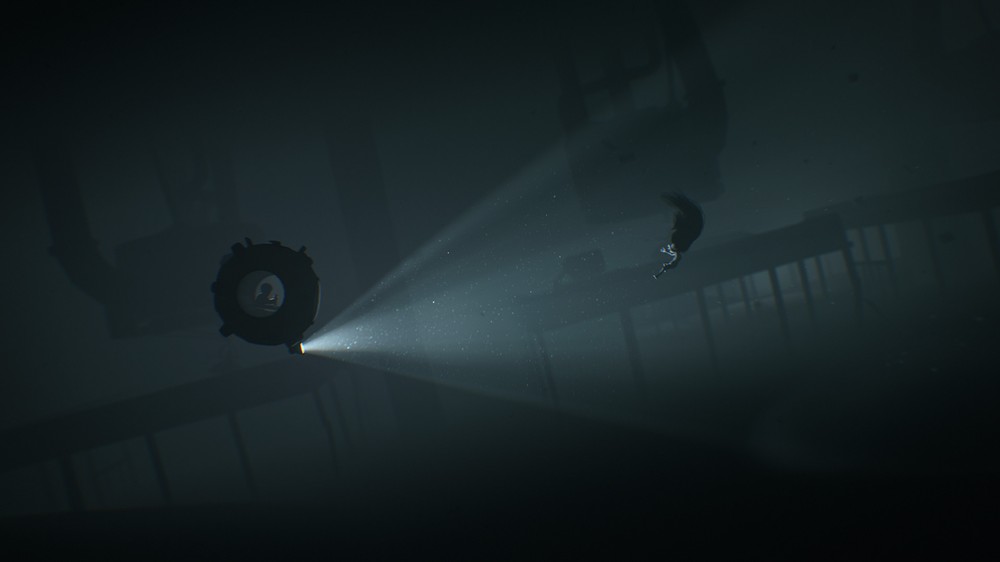 The puzzles for INSIDE weren’t exactly easy but nothing was terribly hard either; certainly not as difficult as the puzzles in Limbo, which had me frequently visiting FAQ’s.   Perhaps that is a testament to some better puzzles designs that logically make more sense in a practical world.  The longest I was ever “stumped” in this game was probably 5-7 minutes.   In INSIDE you almost instantly recognize what needs to be done and how to do it.  The challenge is just executing the moves to make it happen.  Things like finding a way to divert a dog so you could get past him, jump over giant hogs like a rodeo clown, or even play a fun game of move-matching Simon Says while trying to fit in with a line of slug-infested adults all help keep each and every screen fresh with new and exciting challenges.

I have to admit I was a bit put off by the ending, which not only failed to answer any of the questions that had been building up over the past four hours, but was also very depressing…like a Brad Pitt, “What’s in the box?” ending. The credits will roll and you’ll pray for a post-credit scene that might give you a glimmer of hope or closure, but it never comes.  You are merely greeted by the title screen where you can replay the entire game and go for those missing achievements, because I guarantee you, you missed something in your fist pass…probably a lot.   I thought I was pretty thorough in my exploration – always looking to the left whenever possible, yet I only had a third of the total achievements in the game when I finished; most of which are directly related to these glowing sphere thingies hidden in secret areas – much like the eggs in Limbo. 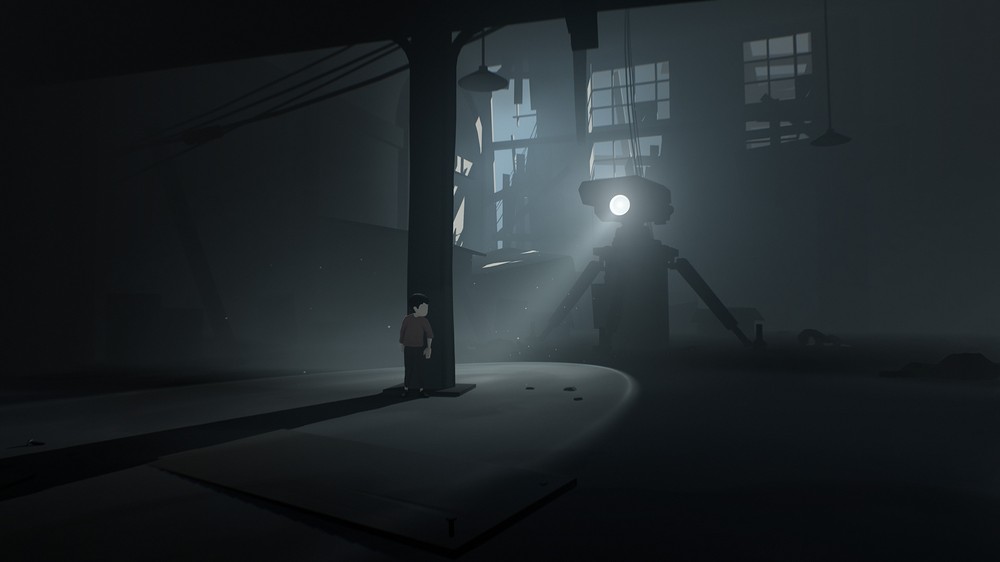 The presentation is minimalistic at best with mostly grayscale graphics splashed with moments of color and loaded with unprecedented detail. There isn’t a single spoken word of dialogue in the game and music only plays for just a few minutes during the entire game at specific key moments, usually to enhance the moment.  Sound effects are flawless and totally impact the gameplay – mostly because that is all you are hearing for four hours.

I really enjoyed my time with INSIDE, and I look forward to replaying it at least once more to get my missing secrets/achievements. But if I have to be completely honest I think I liked Limbo just a bit more.  Sure, INSIDE looks light-years better than Limbo and definitely has tighter controls and more fluid gameplay, but what seemed like a fresh concept in 2011 is a bit derivative now, and the puzzles were a bit too obvious/easy…or maybe I’m just that much better after five years of gaming.  Still, for only $20 this is one awesome, albeit short adventure that will delight you from opening title to the closing credits.  And even though you might not get any satisfaction from a story perspective, there is great satisfaction in just making it to the end of the game.

If you want to see the game in action (or get some spoiler hints on any puzzles) you can check out our full unedited gameplay video series with commentary/thought process on solving puzzles. 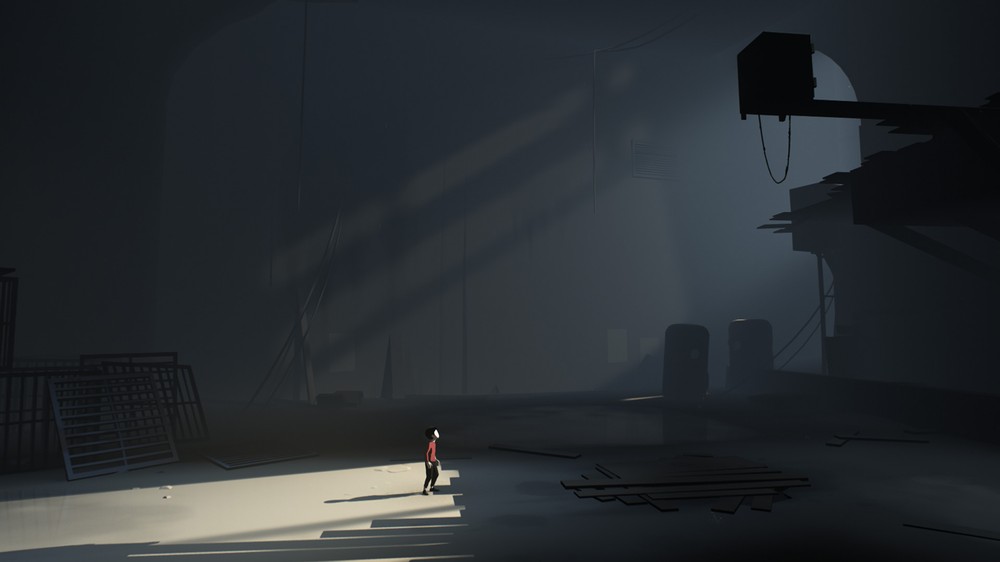 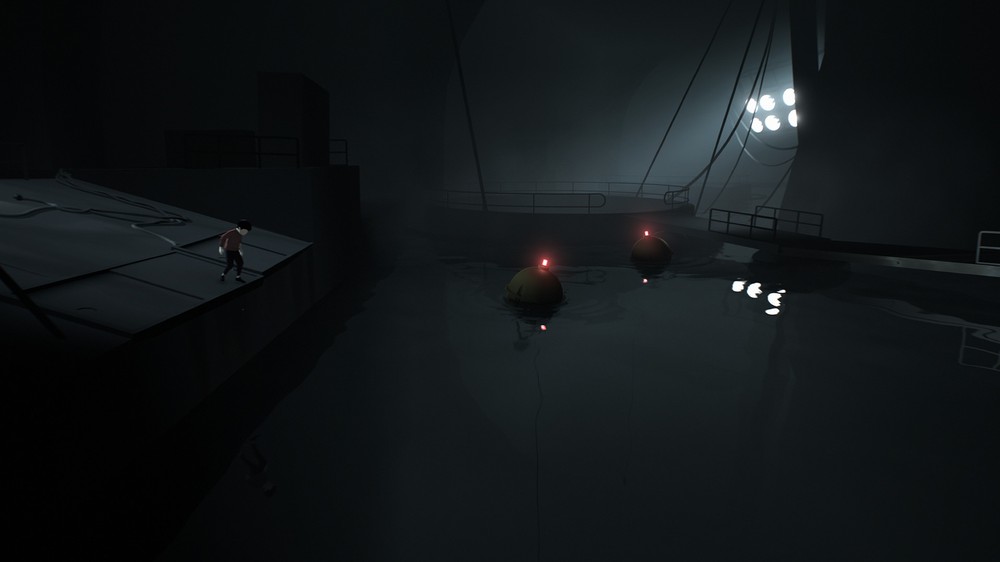 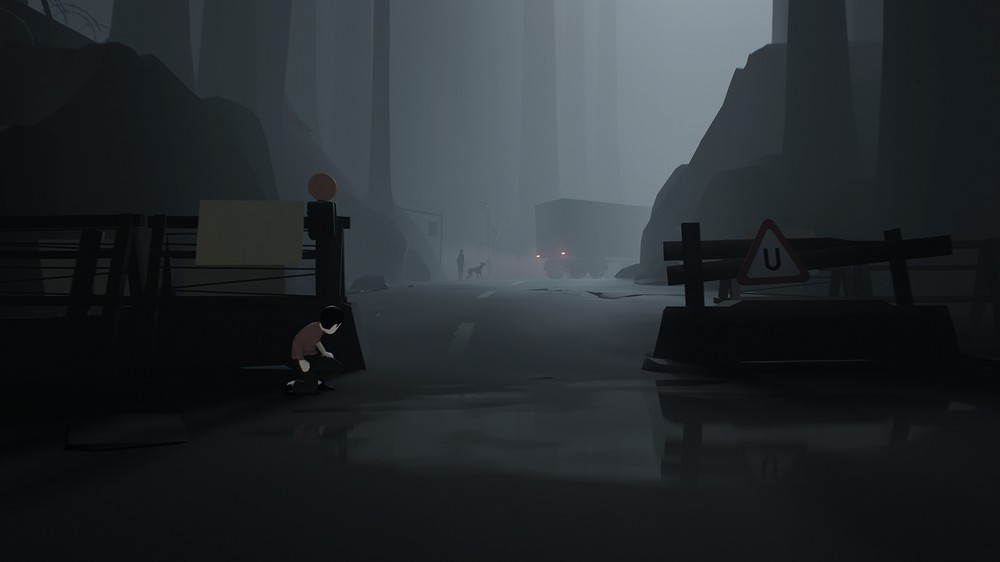 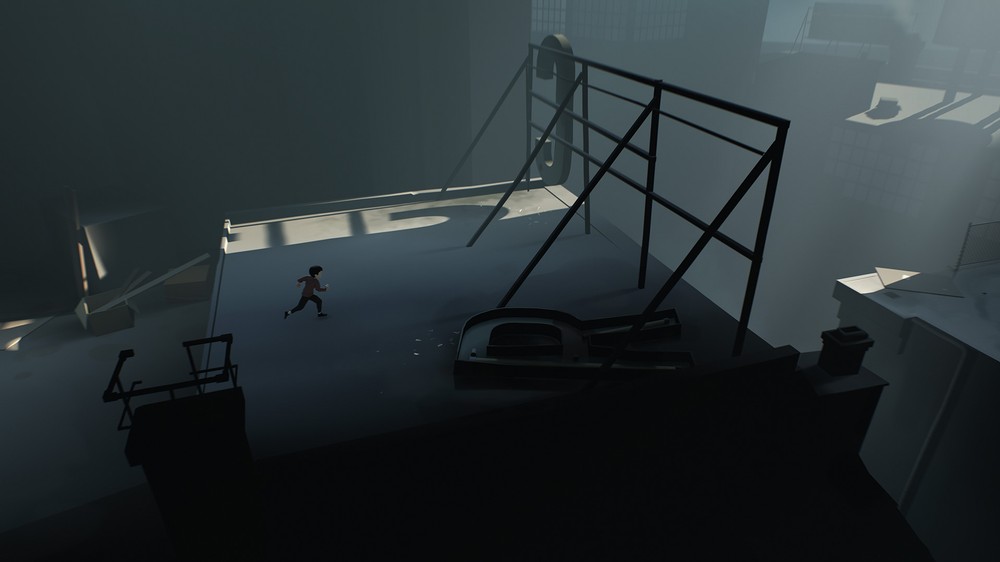 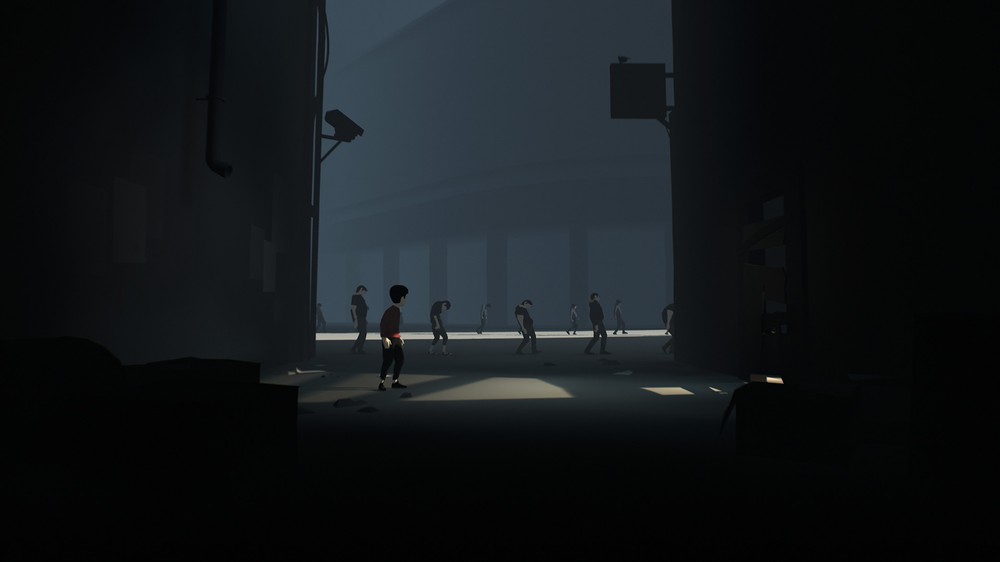