Injustice: Gods Among Us Review – Xbox 360 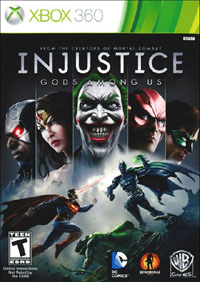 Injustice: Gods Among Us is a prime candidate for best fighting game of 2013.

Before we dive into my review for Injustice: Gods Among Us there are probably a few disclosures I need to put out there so you know where I am coming from. First, I’m not very good at fighting games; at least not in the insanely competitive way that those who lay down hundreds of dollars for fight sticks and memorized hundreds of button combos are. I can hold my own and I have always finished every solo portion of nearly every fighter out there, and I can usually win more than 50% of the time against my own inner circle of friends, but when I play a fighting game I’m usually in it for the story and cutscenes more than the actual fighting. This makes Injustice: Gods Among Us the perfect fighting game for me and those like me who are looking for an epic tale of good vs evil; a grand story that is worthy of the big screen, because frankly, I would have paid to see this “movie” in the theater.

As for my second disclosure, I’m a bigger Marvel fan than DC; not for any particular reason other than the sheer amount of exposure Marvel has over DC in the non-comic book arena. Let’s face it; Marvel has 2-3 movies hitting theaters each year while DC is limited to Dark Knight and Superman in theaters and Green Arrow on TV – which, by the way, is one of the best TV shows ever; even better than Smallville.

The fight roster for Injustice: Gods Among Us is massive, and given my limited knowledge of the DC Universe, many of the characters (especially the villains) were totally unknown to me. Fortunately, you don’t really need any knowledge of the characters or their backstories to enjoy the Story Mode, which plays out over a dozen-plus chapters that will have you playing characters from both the good and evil side of the roster…or sometimes evil versions of a good character. This is a great way to familiarize yourself with those characters you might not know so well, so when it comes time to play them outside the story you’ll already be up to speed on their moves and abilities. 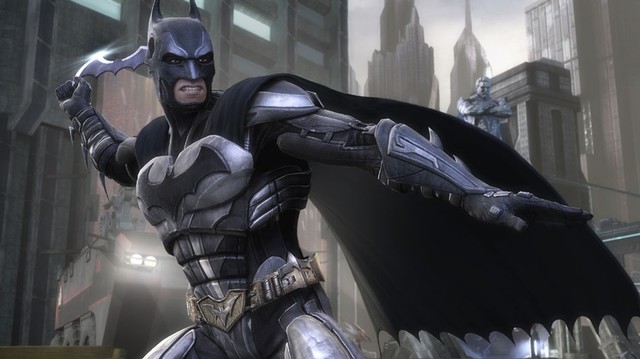 As for the fight engine, I was surprised to find that Injustice: Gods Among Us wasn’t merely a re-skinning of Mortal Kombat, but offered up its own unique blend of combos and rhythm based inputs as well as incorporating fully interactive multi-level 3D stages, and even working in some popular fight mechanics from other fighters like Street Fighter IV. My biggest gripe with the controls was the lack of a dedicated block/parry button. Moving “away” from the attack to block requires perfect timing and almost never worked for me unless I was already at the edge of the screen.

The engine uses a 4-button system for light and heavy attacks; not quite as advanced as 6-button fighters but it works well enough, especially when you factor in each character’s unique special ability. I was surprised that given the number of characters in this game no one seemed overpowered. The balance is pretty spot-on, but just in case exploits are eventually found the designers have the ability to push engine updates into your game without having to download a major update patch.

Instead of the standard best-of-three to win, Injustice: Gods Among Us uses a single round fight system where each character has a dual-layered health bar. This makes individual fights last a bit longer but also helps immerse you in the story as well as adding a bit of strategy on when to use your larger attacks, because damage started on one health bar doesn’t carry over to the second. As fights progress you will fill up your three-section super meter by performing combos and taking damage. You can spend this superpower to charge your regular attacks into something more powerful or wait until the meter is entirely full and spend it all on a mega super attack that can deplete half a heath bar. 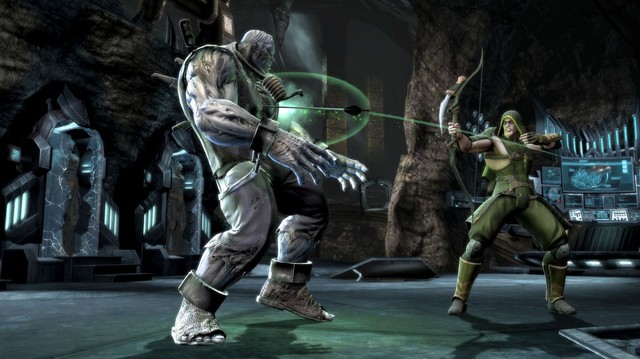 These character-specific super attacks are some of the best moments of the game – the first few times you see them – but later in the game you almost wish you could cancel them and get back into the fight. I ultimately ended up using most of my super meter to charge up lesser attacks and keep the fight flowing along. This also gave me more power to wager on those few instances where a combo would get canceled and the Clash system would trigger. When this happens you can wager any amount of your super meter in what is mostly a rock-paper-scissors head-on collision of good vs evil. My only complaint with this system is I would almost invariably input a wager as part of my last attack/combo input.

The fight arenas are gorgeous with many characters having their own “home court” and any advantages that might come with it. As you move your fighter across the screen you will see an RB indicator light up from time to time. This means you can either knock your opponent back into the level or interact with some object in the level to attack or perhaps perform some defensive flip to escape their attack. The computer is pretty good about using these bits of the level, so you either need to use these elements first against them or stay out of their trigger area. If you find these interactive environments are messing with the balance of your online games or tournaments you can always turn them off in the options.

There are also a few interesting QTE moments sprinkled throughout the story. In these arcade-like mini-games you’ll get to rapid tap some buttons for a minute or two, and if successful your opponent’s starting health will be lower when the fight actually begins. These are surprisingly fun and not at all distracting, as they are worked seamlessly into the story and cutscenes, but they are also entirely optional since failure to participate only means an even fight when they are over. 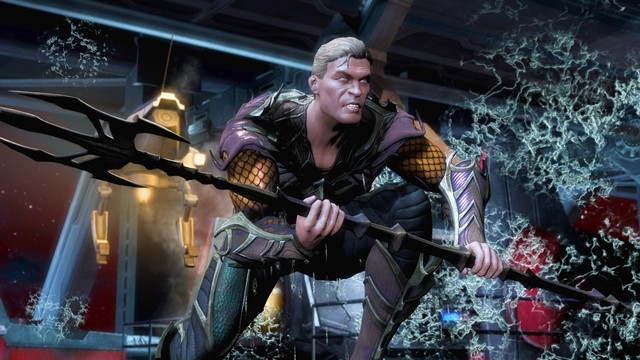 As I hinted above, the story is amazing and sucks you in from the opening cutscene and never lets up. There are smaller videos that introduce new characters and new chapter situations, and then you have much larger videos that propel the story to new and unexpected places; all of which are expertly voice acted and perfectly animated with the level of detail you would expect from a Hollywood production. While it is possible to marathon the 5-8 hours story mode in one or two sittings I opted for a few chapters a day so I could bask in the narrative and give my fingers a rest. Besides, there is a whole lot more to Injustice: Gods Among Us than just its gripping story. This game packs in enough content to keep you busy for months to come.

Before we go into what else Injustice: Gods Among Us has I’d like to mention what it doesn’t. The very nature of the DC franchise, not to mention the story and the way it is presented in the game demands a Tag Team mode. I want Batman and Nightwing to face off against Joker and Harley or…well, you get the idea. Limiting the game to one vs. one is very shortsighted and even a bit lazy if you ask me. Being able to assemble your own duo (or even a team) would have added tremendously to the experience.

Even larger than the Story mode are the Star Labs missions that offer up ten missions for each of the 24 characters…yeah…you do the math. These are fun little character-specific mini-games that often don’t even have anything to do with fighting. Completing each mission earns you 1-3 stars and earning three stars can be very challenging. Stars unlock new missions which earn you more stars which unlock more missions – you get the idea. Completing all 240 missions will earn you a surprise and there are other hidden secrets and crossover prizes for playing the iPad version of Injustice as long as you have your games synced on the same Warner Bros. account. 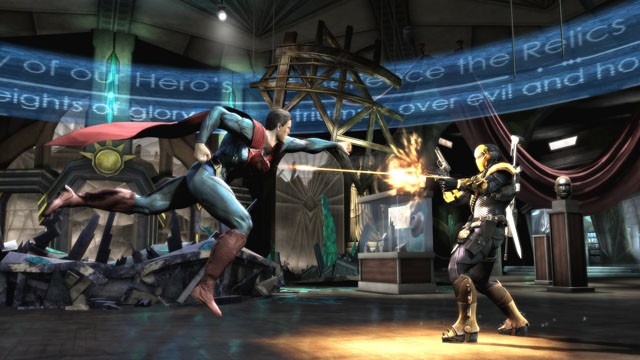 Battle mode has 24 different ladder matches and there is the Classic mode where you can unlock character-specific cutscene endings. Everything you do in Injustice: Gods Among Us, whether it be online or off earns you XP so you are constantly leveling up your profile, which in turn earns you keys to unlock goodies in the Hall of Justice. There are tons of unlockables ranging from concept artwork and battle mods to new costumes and even music. You can even unlock 3D character models that you can spin around and zoom in to check out the details.

I appreciated the game’s short yet informative tutorial that got me up to speed on the new fight engine, but the Practice mode was where I was able to perfect what I learned in training. There are recordable opponents as well as an online practice mode that lets you train with and against other humans. All of this will help you when you finally go online to play the Daily Challenges or play in one-on-one ranked or unranked matches. The King of the Hill mode is fantastic and even offers a theater option so you can watch other players fight in real time and even guess/vote on the outcome. For those looking for the ultimate challenge check out Survivor mode, which is basically King of the Hill only your health carries over from match to match; although you can earn health regen by fighting well. And best of all, in the month I’ve been playing Injustice: Gods Among Us online I have not experience a single instance of lag in any mode or match.

Injustice: Gods Among Us is a fantastic fighting game that, for the first time, actually made me want to get better at fighting. I normally mash the buttons to get through the fights so I can watch the cutscenes, but the collection of characters and their super-cool arsenal of fight moves and special abilities are so appealing that I was actually practicing the combos so I could pull them off in the game. There is so much to do and so much to unlock and it all interacts with itself to generate even more content and activity that even if you ignore all the DLC coming out for the game, it will take you a solid three months to fully complete everything this game has to offer out of the box. 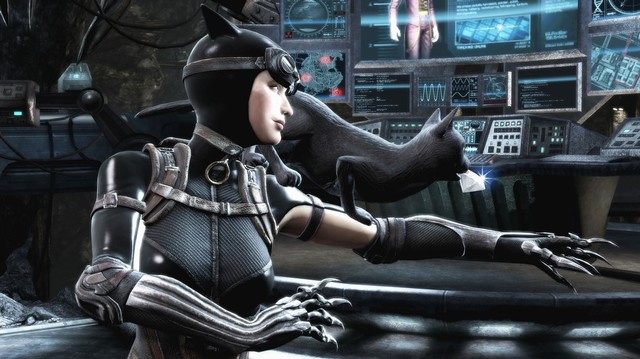 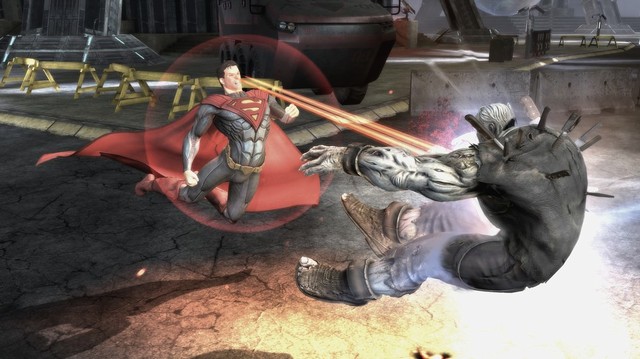 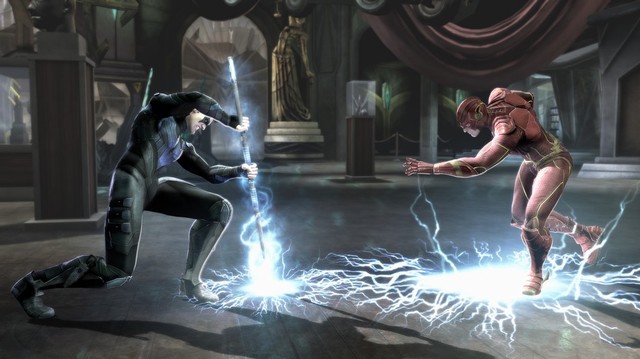 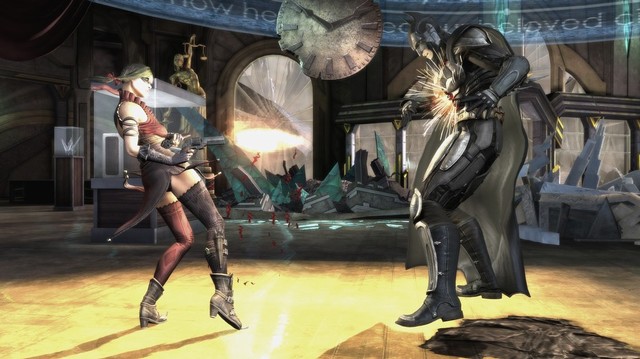 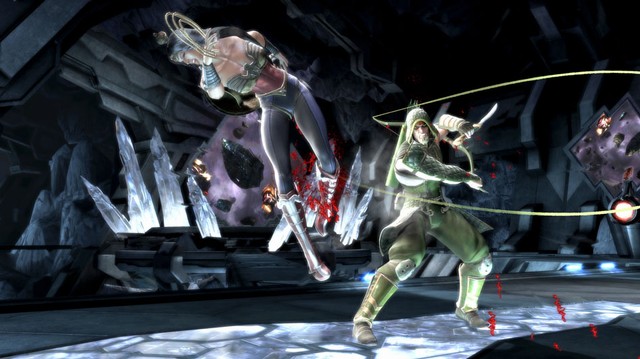 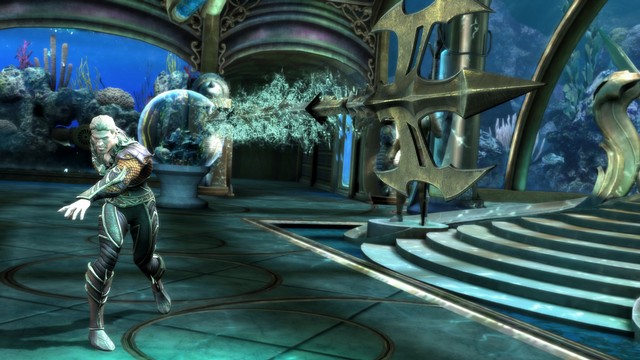 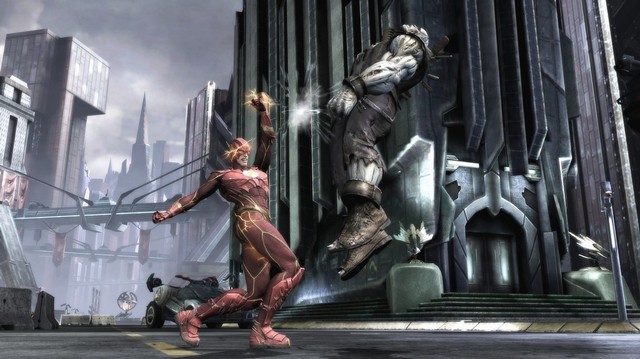 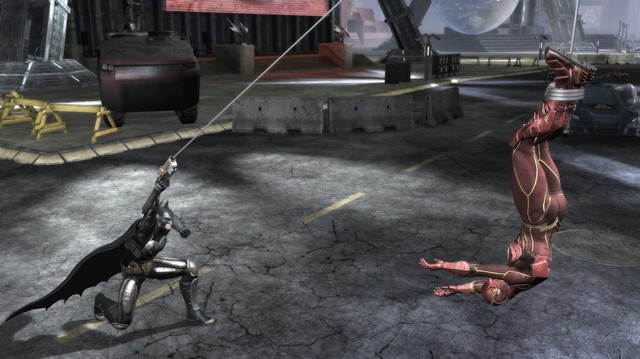 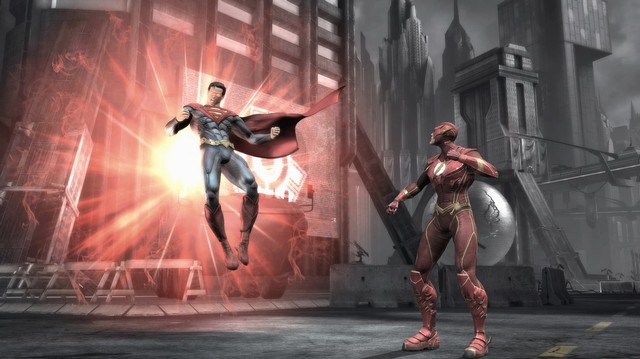 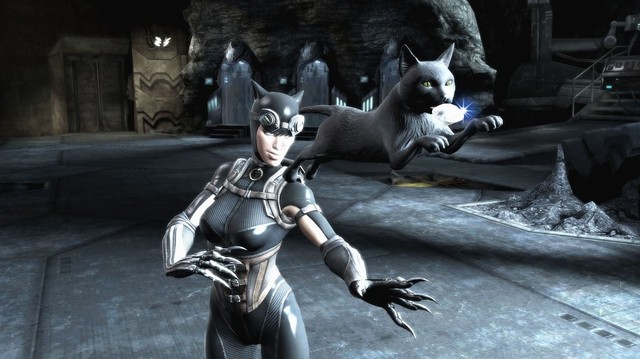 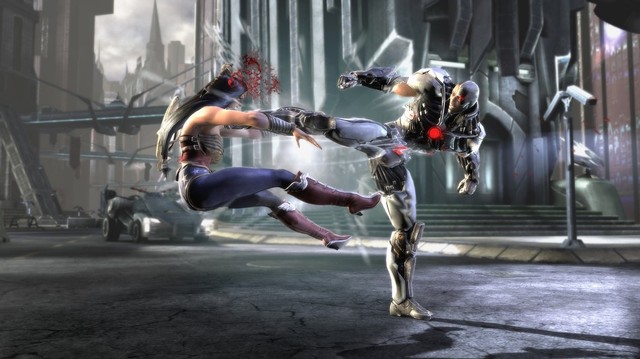 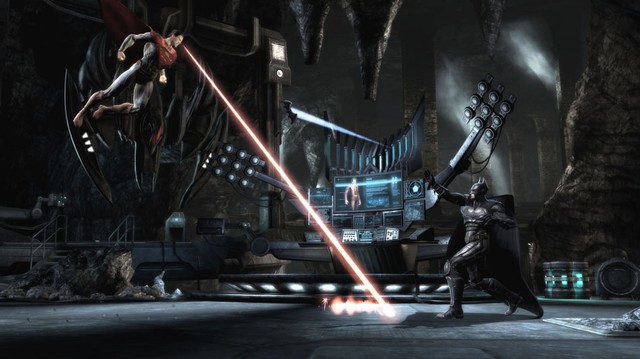 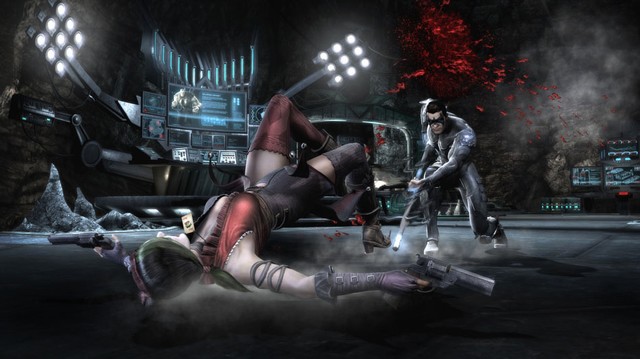 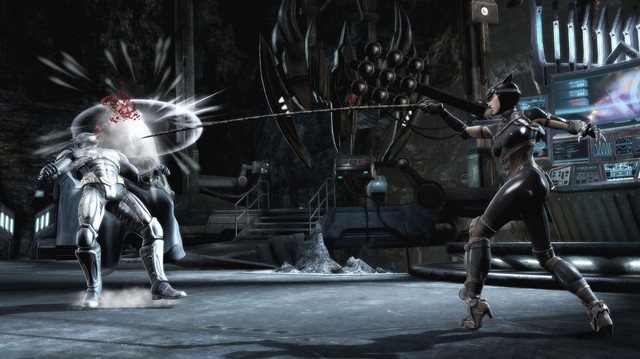