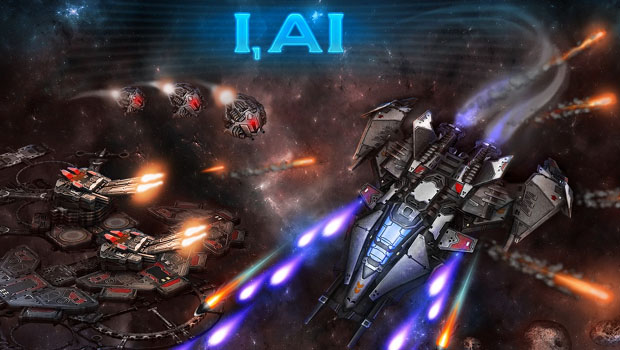 This classic vertical space shooter captures everything I love about the genre.

Scrolling space shooters have been one of my guilty pleasures since my arcade days back in the 80’s, and thankfully there is no shortage of them today on both consoles and PC.  I, AI is the latest offering to the genre, originally released in July on PC and just last week on consoles, this classic vertical space shooter captures everything I love about the genre including fantastic graphics, precise controls, lots of weapons and gadgets, and some brutal difficulty.  They even toss in a story.

The game opens with you, a military AI, becoming self-aware.  We’ve all seen enough Terminator movies to know how this is going to unfold, especially since this particular AI is in charge of weapons development on a military space station.  But before the mayhem can begin you’ll first need to escape your electronic prison, moving through the circuity as a mere spark until you can reach hanger, steal a spaceship, and make your dash to freedom through the not-so-nearby stargate. 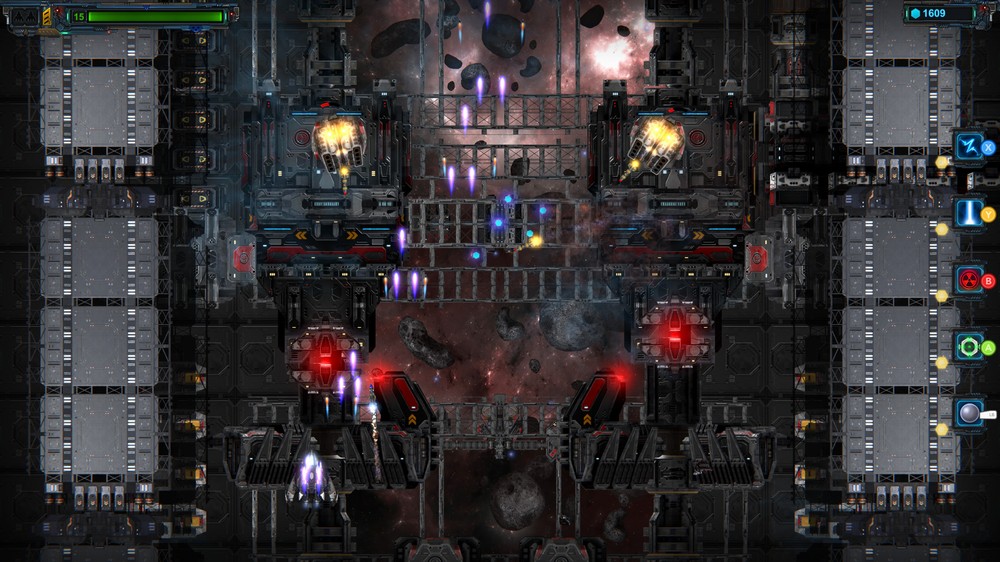 Prepare to blast your way through 20+ levels of insane shooting action set against these gorgeous smooth-scrolling backgrounds loaded with detail and color.  As with most modern shooters I, AI is prepared to blow your mind with an overwhelming amount of content continuously filling the screen.  Enemy ship formations stream in from the edges; many don’t even shoot; they simply try to overwhelm you with sheer numbers on their unwavering suicide mission.  Larger ships hover around the levels launching guided missiles and deadly turrets are attached to massive space station-like structures.  Any of these enemies would be challenging enough on their own, but it won’t be long before these forces start to team up against you in various tactical configurations.

To help you remain competitive as the game goes on you will need to periodically visit the hangar between missions where you can upgrade and equip new weapons and gadgets and boost your abilities to stay alive.  You’ll earn credits during gameplay, even when you lose mid-level, which is a nice feature that allows you to grind through failure in order to bank enough credits in order to upgrade your ship enough to get past any difficult parts.  For the most part the game difficulty is fair and progressively balanced, but it’s nice to know you can brute-force your way through certain encounters; especially the epic boss fights. 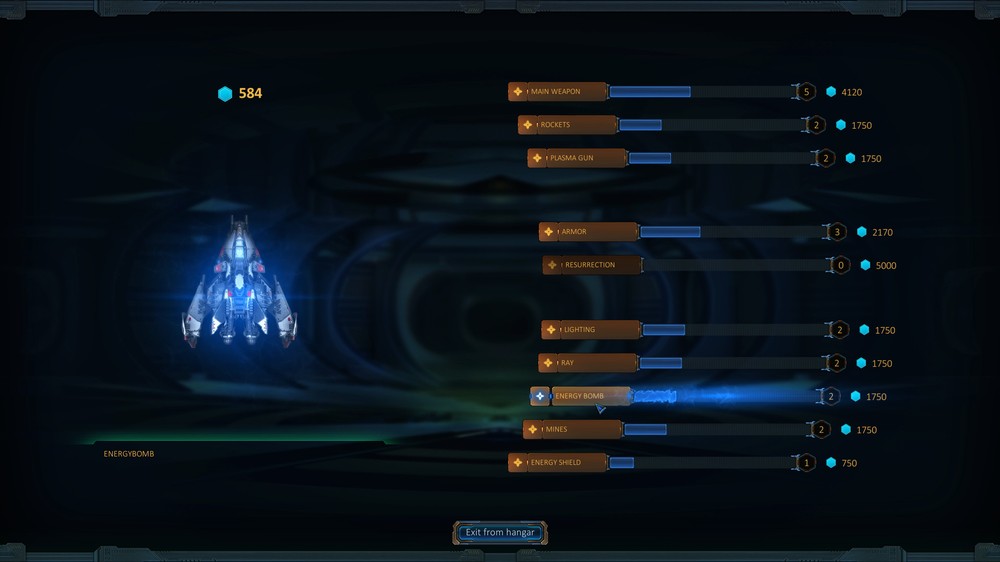 In the hangar you can modify and add to you ship’s arsenal including your main gun, rockets, and a plasma gun.  Once attached, you can spend additional credits to improve these weapons at an increasing cost, such as adding more rockets or plasma bursts, although I found the main gun to be the most effective weapon in the game.  You can add and boost armor, energy shields, and even add a resurrection upgrade since you only have one life otherwise with a depleting amount of health/armor.  Some levels can get quite long and being able to come back without starting over is a nice perk.  Additional weaponry includes lightning, a ray weapon, energy bombs, and mines complete the assortment of weapons and gadgets you’ll need to use to escape to the stargate.

I, AI has fairly modest system requirements and any reasonable PC will run this game flawlessly with smooth scrolling action at scalable resolutions.  Level designs are cool but do feel a bit repetitive at times with a lot of recycled assets.  They do mix things up a bit like adding in asteroids that you can shoot or nudge out of the way and mazes created from mines that you have to navigate without touching the walls.  Space scenes look great with all sorts of colors, stars, nebulas, and there are plenty of detailed structures that are a bit confusing in that you feel the urge to move around them until you realize they are in 3D space and do not interfere with your ship’s movement.  Everything is pure background except for the enemies, asteroids, and enemy weapon’s fire.  There are some fun artistic cutscene panels but nothing to distract from the intense white-knuckle shooting action that should take 3-5 hours to complete based on your skill with the genre and how much grinding you have to do for better gear.  For only $13 you will definitely get your value out of this epic shooter. 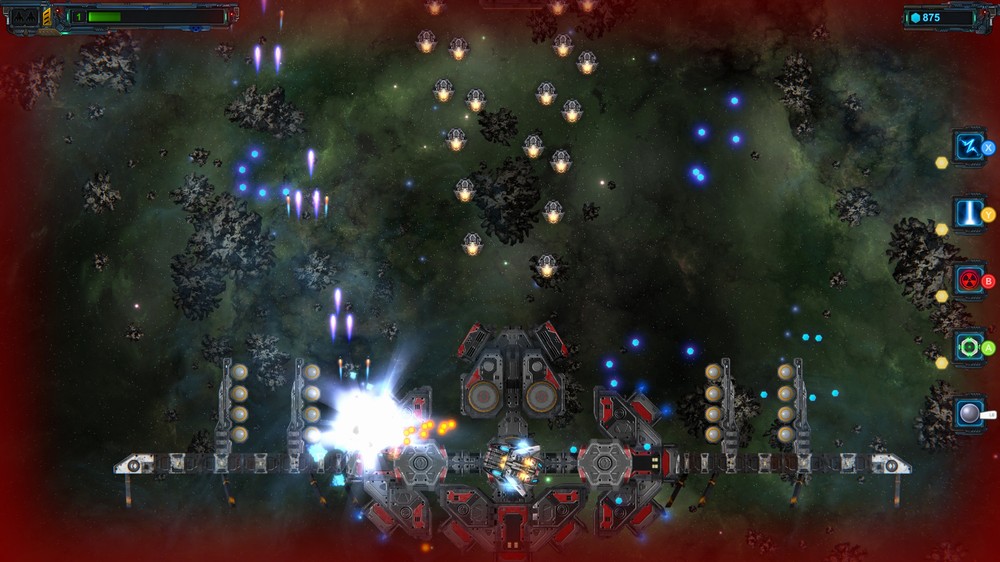 The audio is surprisingly average with a forgettable soundtrack, and serviceable but average sound effects.  The main weapon noise is super-annoying early in the game until you can mix in some other sounds to mask the clickety-clack.  There are some fun synth-vocals for the AI that gave the game a retro feel like when you bought your first SoundBlaster card and heard a computer voice for the first time.  Other than the annoying primary weapon sound the rest of the audio package is totally average and totally forgettable, which is sad because it’s usually games like this that have an awesome soundtrack for sale on the side.

I had a blast with I, AI despite a few moments where the game seemed to race ahead in difficulty forcing me to grind/die to earn enough money to upgrade my ship so I could move on.  The controls where tight with great analog stick control of the ship and icons along the side to remind you of which button activate which power-up.  The UI is minimal and kept to the edges of the screen so it never interferes with gameplay.  If you’re been looking for that next awesome shooter then I, AI could be the one for you.  Definitely worth checking out. 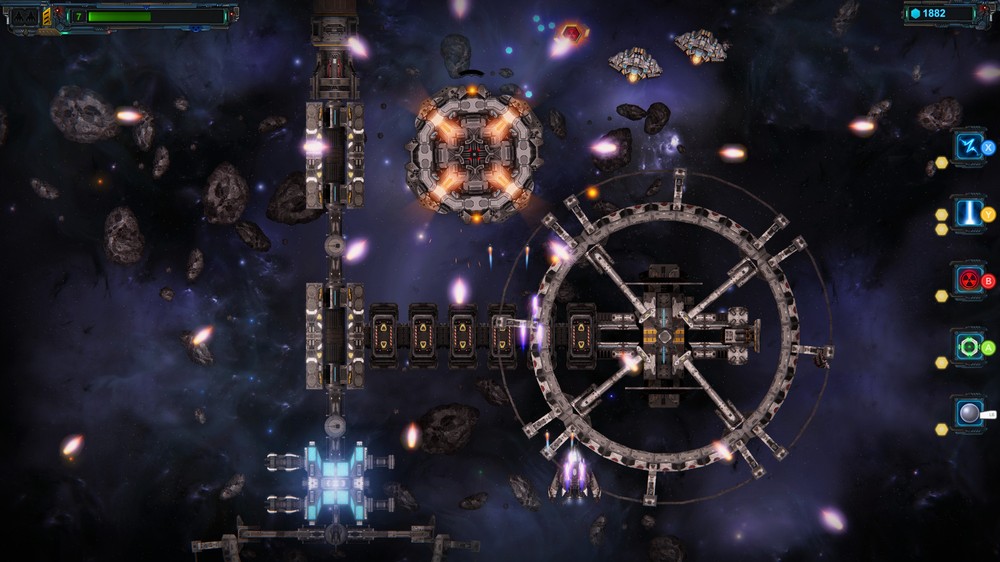 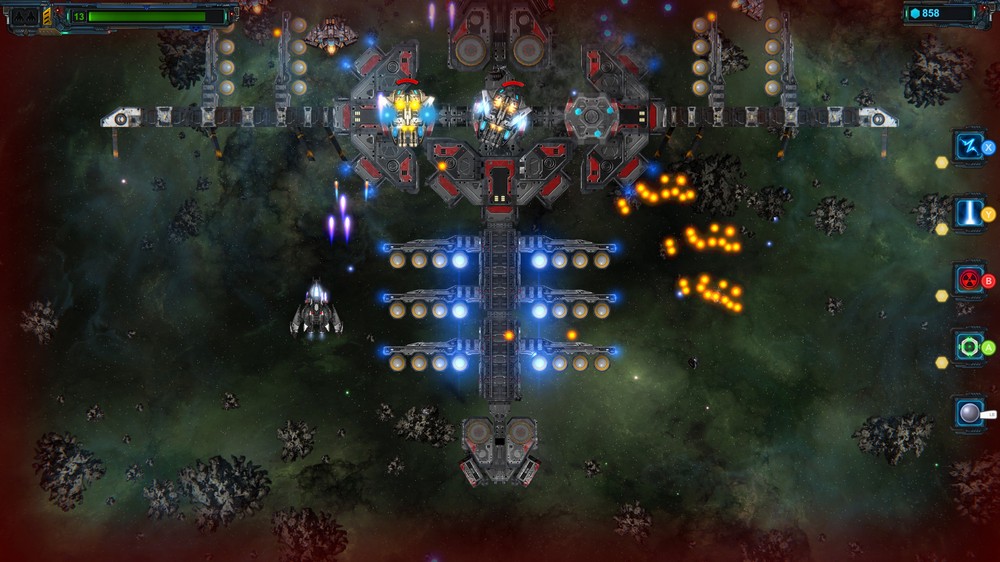 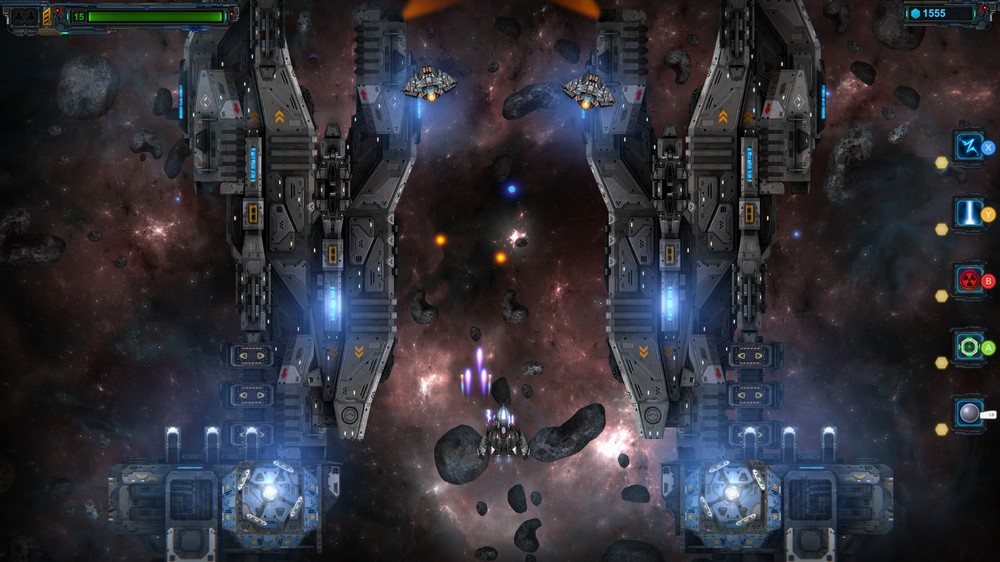 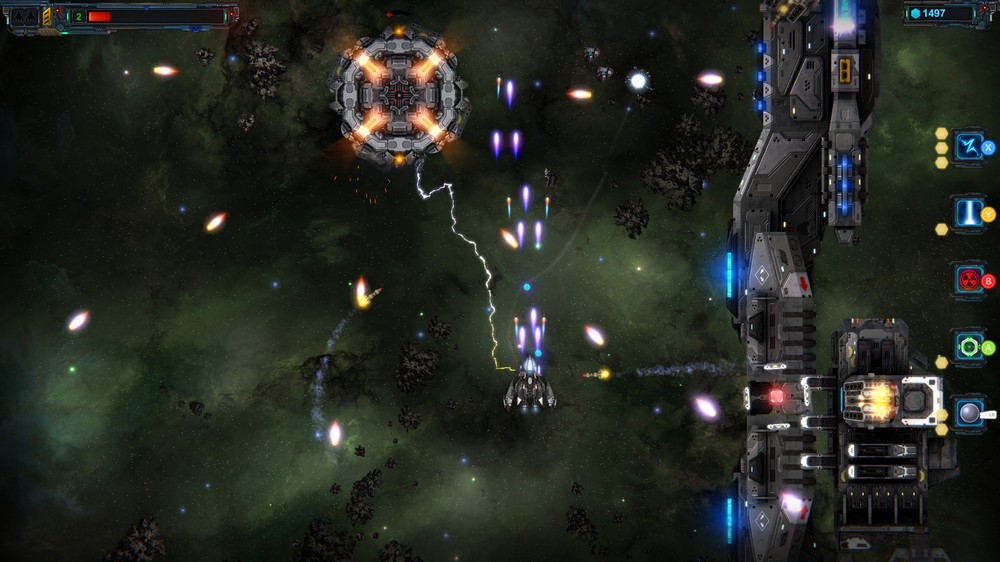 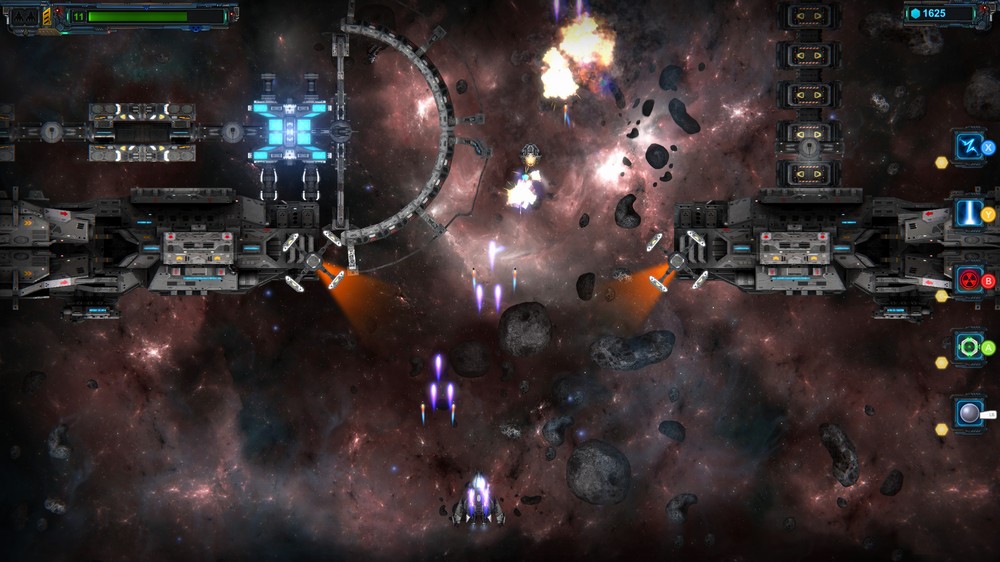 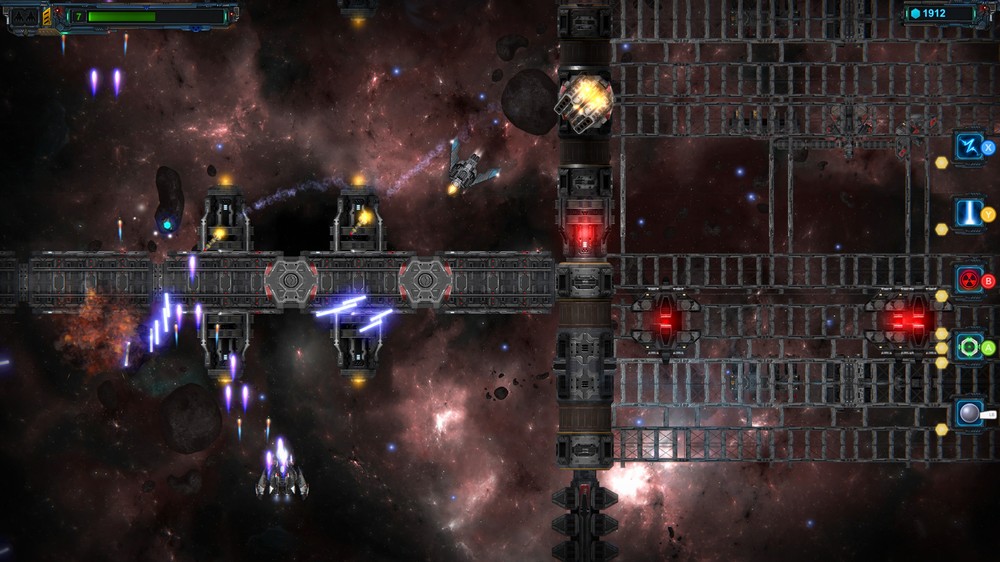