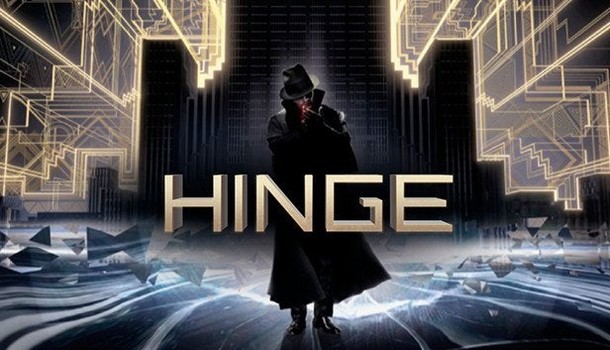 HINGE is one of those games that if you were playing it on a normal computer or console you’d be telling yourself how much better this game would be in VR.    Thankfully, Arcadia figured that out ahead of time and released the game to Steam with support for all the major headsets.  In this review I test this latest psychological horror adventure on both the Vive and the Rift S with varying degrees of success.  But regardless of which system you end up playing it on, HINGE delivers an immersive and often quite-frightening experience inspired by Lovecraft and classic art deco design aesthetics that will have you wishing for a VR version of BioShock.

HINGE kicks off with that classic noire style of self-narration from an old-timey gumshoe.  There is a brief tutorial intro level where you can get comfortable with the controls and figure out your best comfort settings for movement, turning, and any vignette filters while turning.  I have no issues with VR sickness and my RTX 3080 was plenty powerful enough to run the game at max details with smooth moving/turning and no vignette, so HINGE basically looks and plays as if it were on a normal screen.  After a few minutes of exploring a small section of passages and bookshelves you’ll come to a fiery dead-end that ultimately leaves you inside an apartment in an abandoned and clearly haunted skyscraper. 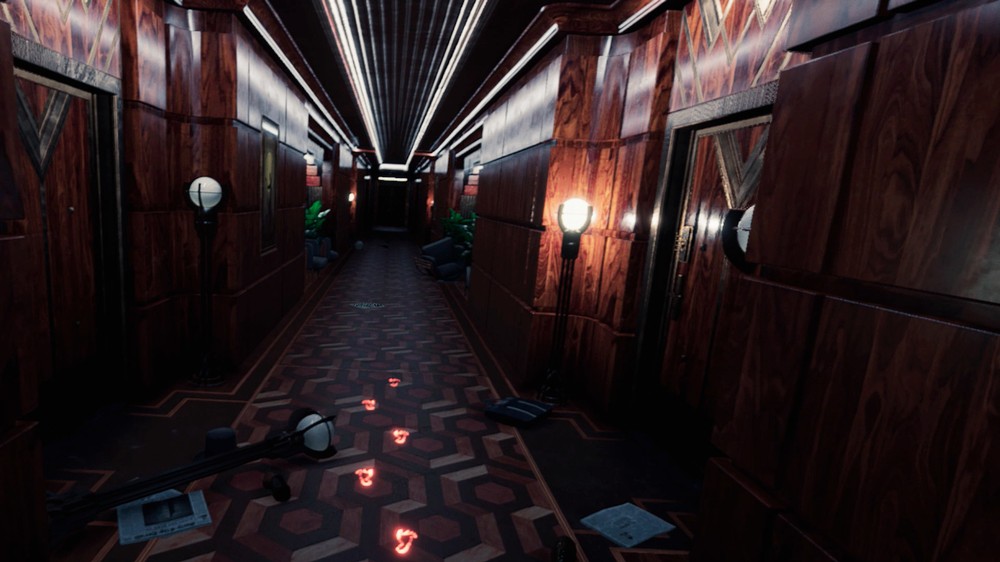 There are a few more tutorial elements like learning about cigarettes and how to light them with a lighter then smoking them to transport yourself to your safe space, a hub like room where you can analyze all the clues, items, and documents gathered while exploring the skyscraper.  You can even review transcripts from the numerous cutscenes you discover in the game.  After this, HINGE pretty much tosses you to the wolves with plenty of cryptic gameplay elements that aren’t very well explained or perhaps explained too late.  Example; early on you’ll see all these transparent spheres floating around the hallways and room, but what they are and how to use them won’t be explained until 30-45 minutes later.  Another annoying element was the first door without a handle that you naturally assume can’t be opened like all the other doors WITH handles.  Only by accident did I find that if you walk into the door it magically dissolves.

At first, HINGE is pretty linear with locked doors that keep you on the proper path.  There are these supernatural pockets that will reveal stylish cutscenes created with a mix of mannequins that seem to be vanishing after the Thanos snap and some decent voice acting.  The rest of the game is pretty much just exploring the various areas of the skyscraper to figure out what is going on.  It’s a stylish and sinister design that blends design elements of BioShock with the horror elements of the Overlook Hotel from the Shining.  There is this creepy smoking man in a fedora that will constantly appear behind you then vanish when you turn around to look at him, but he always leaves behind a potentially useful document.  There are ghostly apparitions that will roam the halls and phase through doors.  There is the super-creepy mirror universe where everything turns blue and furniture starts floating and other rooms where the ceiling and floor are reversed, and even a haunted maze.  There are also these statues that will come to life and attack you if you turn your back on them. 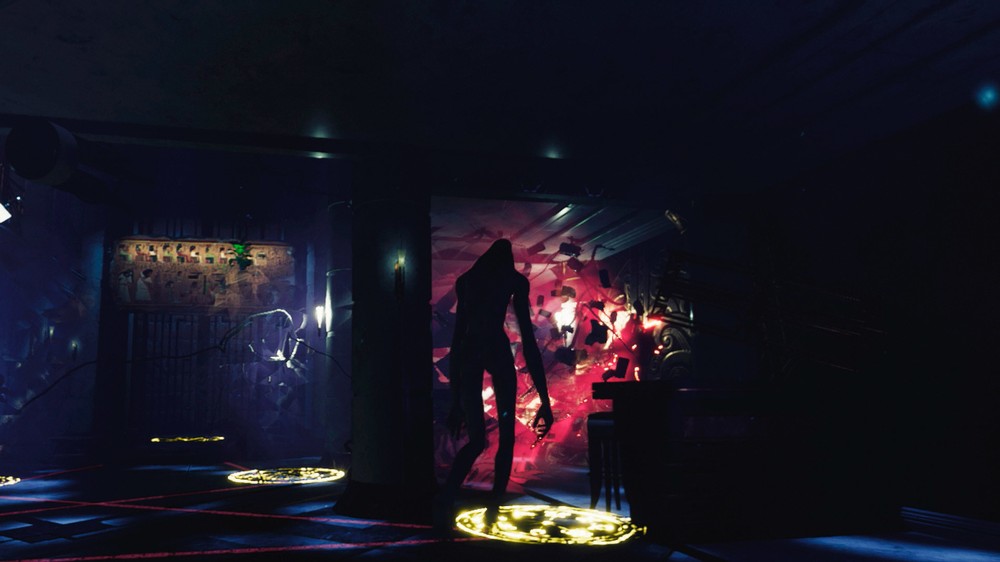 There are plenty of ways to die in HINGE and most of them are out of your control.  You will often be killed within seconds by some unseen entity or perhaps some black tentacles will strike you down.  You always end up back in your apartment; your death count tallied with hash marks scratched onto the wall beneath your to-do list.  Getting back to where you died doesn’t take long, especially after you start unlocking doors and shortcuts to other main areas of the building.

I did have a few issues with the game.  There are a lot of documents to read but whenever you actually take them the text becomes fuzzy or even vanishes.  Dropping the document makes everything legible again but you might have to crouch to read it.  It would have been nice to have a “read” button that just displayed the info in plain text like every other adventure game does.  The bad thing is you want to stop even picking up the documents and just read them where they lie, but you have to pick up several to trigger progress and store them in your smoking den.  The other issues I had were more with interface and controls that were mirrored on both the Vive and the Rift S.  Grabbing and turning door handles was problematic, especially with this awkward delay of a multi-pin locking system that added a 3-5 second delay between turning the handle and the door actually opening.  You also have to grab the handle and physically step backward dragging the door open, otherwise if you pull the door toward you like you would in real-life it will hit your arm and bounce back closed. 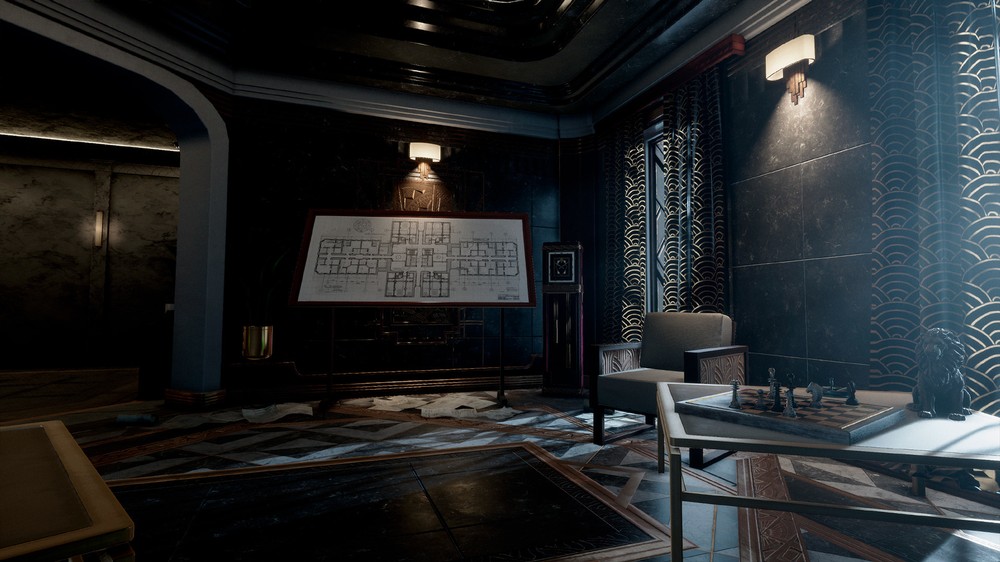 And finally there is the issue with the inventory belt; a series of slots around your waist that simply doesn’t work when playing seated.  There were also some random glitches where dropped inventory items did not spawn back into their belt slot.  About 90min into the game I lost the tuning fork and had to reload a previous save and replay quite a bit.  Grabbing the cigarette case and lighter from your left and right armpit areas was also hit and miss and all these problematic and inconsistent controls kept ruining my immersion with the game by creating unnecessary struggle.

As mentioned, I played on both the Vive and the Rift S and while the experience is nearly identical there are a few caveats for the Vive; not enough to vary the score, but if you have both VR options available you’ll likely want to play on the Rift.  The Touch controls are a lot more comfortable and feel more natural when interacting with the virtual environment.  HINGE is a very dark game which created added visual detractions with god rays and screen door fuzziness in the dimly lit skyscraper.  The Rift S is a noticeable improvement when making side-by-side comparisons on overall clarity.  HINGE does support room-scale, but the game doesn’t really encourage you to walk around your play-space to explore the virtual world. 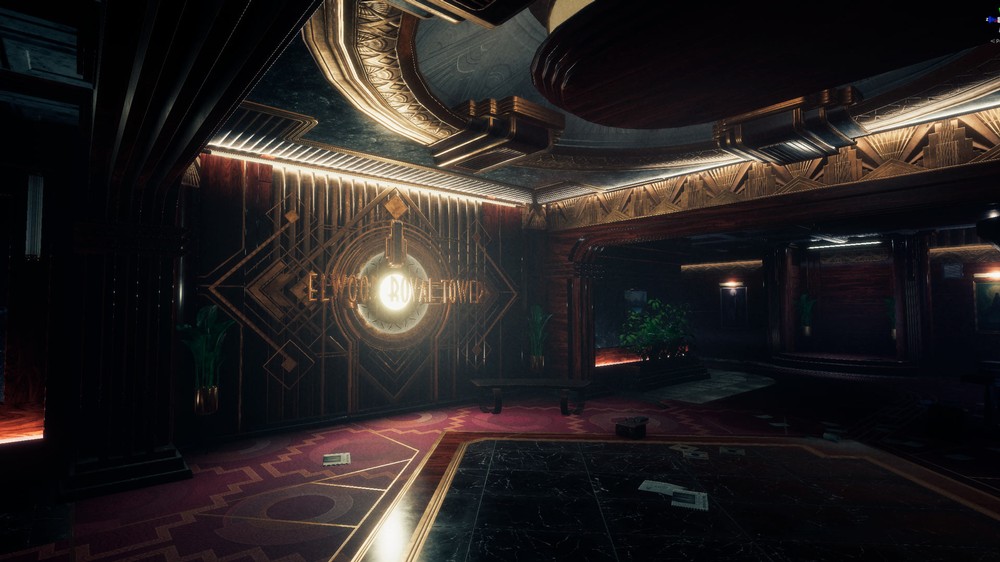 I love horror games just as much as VR adventures so HINGE was the perfect mix of the two.  Despite the aforementioned nagging issues I had with some interactions I ultimately had a terrifying good time exploring this haunted skyscraper loaded with genuine tension and even a few quality jump scares that didn’t feel like cheap shots.  There are still a few things I hope get cleaned up in a future update, but I can still confidently recommend buying HINGE if you are a fan of VR horror.  There is even a demo so you can try it for yourself.