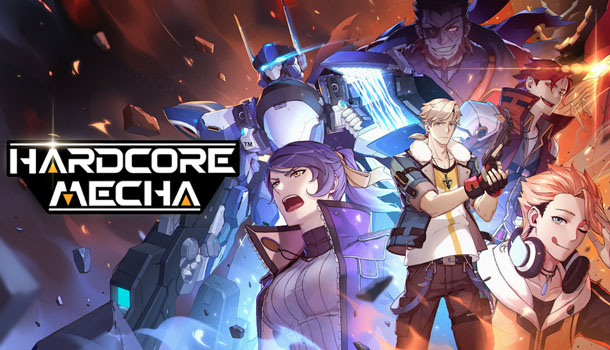 - Some bosses too strong to handle in single attempt

By far the most fun 2D side-scrolling game I’ve played on my PS4.

It seems I’ve been on a Mecha binge lately and it continues in “Hardcore Mecha” developed and published by RocketPunch Games. You might recognize this game by its earlier title of Code: Hardcore back when it was funded in September 2016. I’m surprised this wasn’t on my radar sooner than last week being such a fan of the Mecha genre but occasionally something slips by undetected.

Hardcore Mecha takes its name quite literally because it only has one difficulty, kind of. You technically have the option of choosing “easy” instead of “normal” but it doesn’t change the difficulty of the game; it simply gives you some items you can equip that boost your Mech’s stats, with an interesting price that I’ll touch on later. 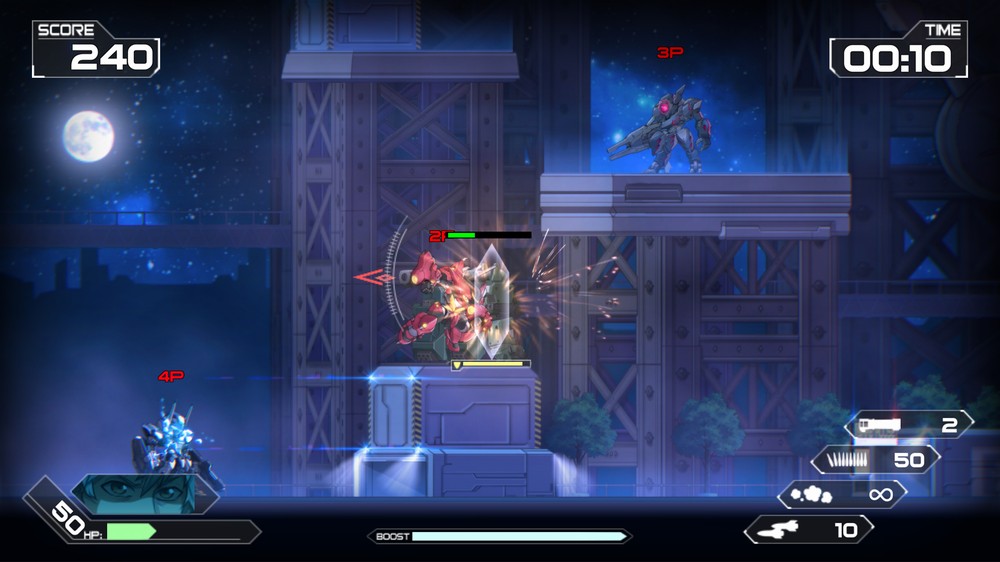 Before I get to the main game I have to mention the tutorial you quickly go through when you first start playing. You are thrown into a fight against a giant monster and piloting a crimson colored Mecha with tons of armor and weapons. After you defeat the monster using your amazing super attack the screen starts to pan out and my first thought was, “oh this must be like a movie or a video game inside the game” and I wasn’t wrong, except it was no game. As the camera continues to pan out you see people getting shot down, blown up, squashed, and all sorts of atrocities. I was stunned but also intrigued. You start the actual game as part of a professional mercenary group tasked with finding a woman named “A” in a combat zone full of terrorists causing all sorts of trouble and really just destroying everything and everyone they see; the same combat zone you just witnessed at the end of the tutorial. Per the title of the game you are of course a Mecha pilot and that’s how Hardcore Mecha begins.

As you progress through the story and complete missions you are ranked from F to S depending on your performance by collecting credits and defeating enemies. These credits are then used to unlock protection bonuses, additional weapons and armament bonuses such as changing the kind of bullets you use to increase damage. Missions vary from standard side-scroll combat with bosses at the end to stealth missions and point defense; quite an array that I did not expect. The stealth missions in particular are really interesting because you control the main character “Tarethur” outside of his Mech, so that was nice considering hiding a 26-foot robot might be difficult to do regardless of how rainy it is. The main story missions are all about the terrorist force that you encountered in the first mission and your fight to push them back and stop their attack on the earth and its nations. 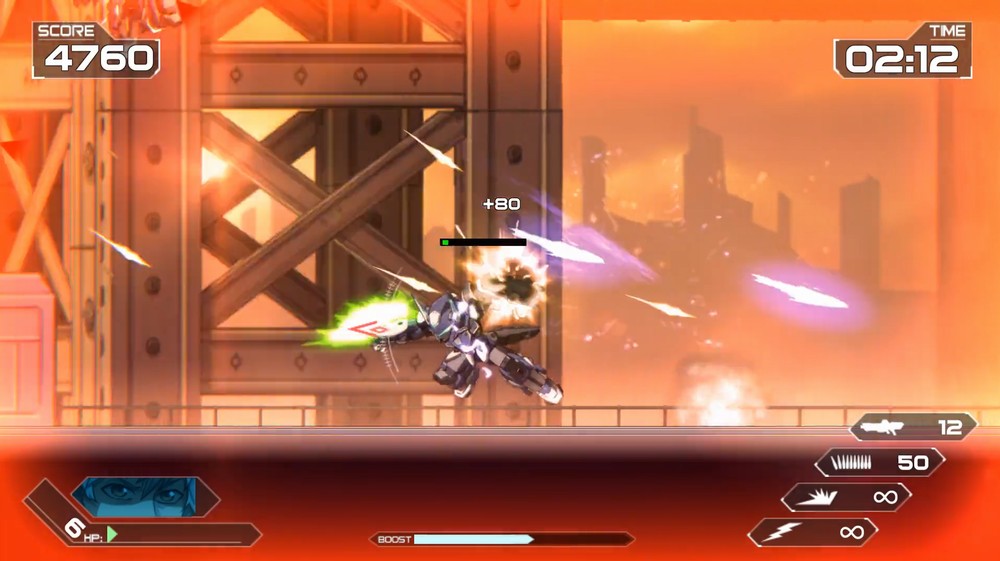 While Hardcore Mecha is 2D side-scrolling it has great anime quality character designs, the main character “Tarethur” could even be a main character in a Final Fantasy game., He has it all, the silver hair, blue eyes, a cross necklace and an attitude to match, but the real shine is in its dialogue. Most people who hear something like “No space suit, you going to wear a tank top to space next?” might be confused, except I am a huge Gundam fan and that’s exactly what the main character of the Gundam Wing series does, wears a tank top while piloting his Mecha. There are spoken words but its just a dynamic portrait of the characters without any mouth movement, and that’s if you get any voiceover at all. Much of the game is reading text conversations between the many characters to try and keep track of the story. It’s obvious that they put a lot of work into their character designs and it really shows. The same could be said for their soundtrack. It is exactly what I thought music would sound like when fighting in this sort of game where you are boosting all over the screen to dodge attacks.

Combat revolves a lot around boosting and blocking, and damage is not to be taken lightly when you are in a mission. You can quickly get overwhelmed by how much stuff is attacking you if you aren’t doing your best to avoid damage. I can see the appeal in a game like this with its boost dashing across the screen because I remember doing the same kind of tactics while playing Mega Man. That’s what it most reminds me of personally, the combat from the Megaman X series, except for blocking because he never figured out how to do that. You have a main weapon and a sub weapon that you always begin your missions with but during the missions you can pick up enemy weapons that drop with limited ammo, it ranges from a mini-gun type weapon to flamethrowers, to a plasma cutter type of weapon, truly ridiculous. The bummer is that once you pick it up, the other weapons of the same kind disappear so I couldn’t replenish or increase the base magazine. 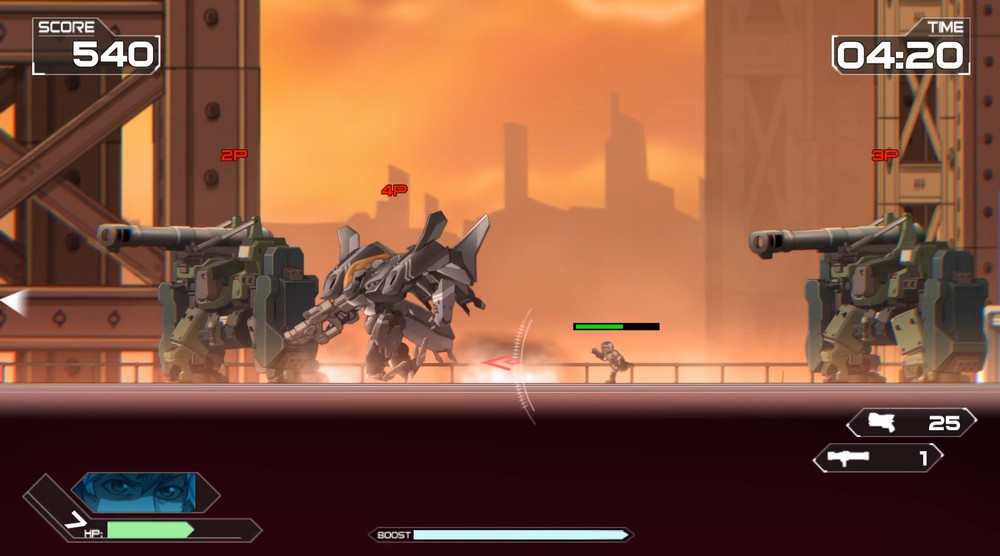 The enemy has full use of all these weapons and that is why blocking and dodging is so crucial. You will get hurt a LOT when playing these missions but thankfully they are pretty nice about giving you repair stations or health kits when things get too tough. All of the movement and aiming uses the same thumb stick controls as well, so you shoot in the direction you are moving using a 360 degree reticule, sometime it can get annoying to accidently boost one way because you tried to shoot in one direction while facing another, melee attacks make up for those moments, so if you get too close on accident, hit them with the old 1…2 combo.

As of 1/13/20 the base game has the single player and multiplayer modes where you can fight against your friends to prove who has the best reflexes and is the best pilot. There is a new game mode slated for release on 1/14 on the PC version, but I’m unsure if this is coming to PS4 at this time. The multiplayer also allows you to use a ton of mechs and pilots that you wouldn’t normally get to play as or even see, as there are some special Kickstarter mechs that have made it onto the PC version, and I hope they will come to the PS4 as well.

Hardcore Mecha is by far the most fun 2D Side scrolling game I’ve played since I got my PS4, it has everything I love with its great music, anime style characters and of course, giant fast robots. It can be frustrating at times with its overpowered bosses, but there is nothing better than finally taking down a behemoth three times your size and getting that rank screen. 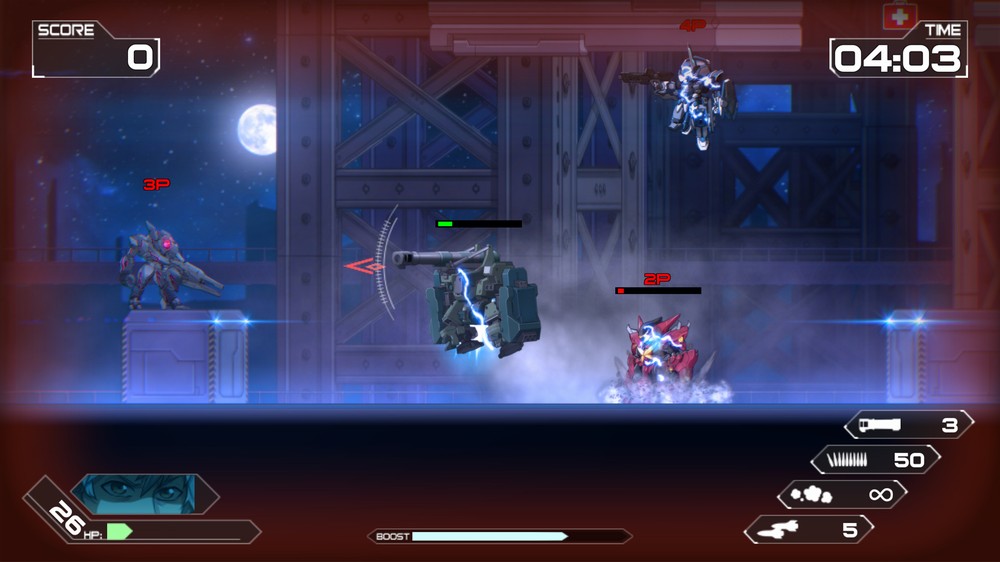 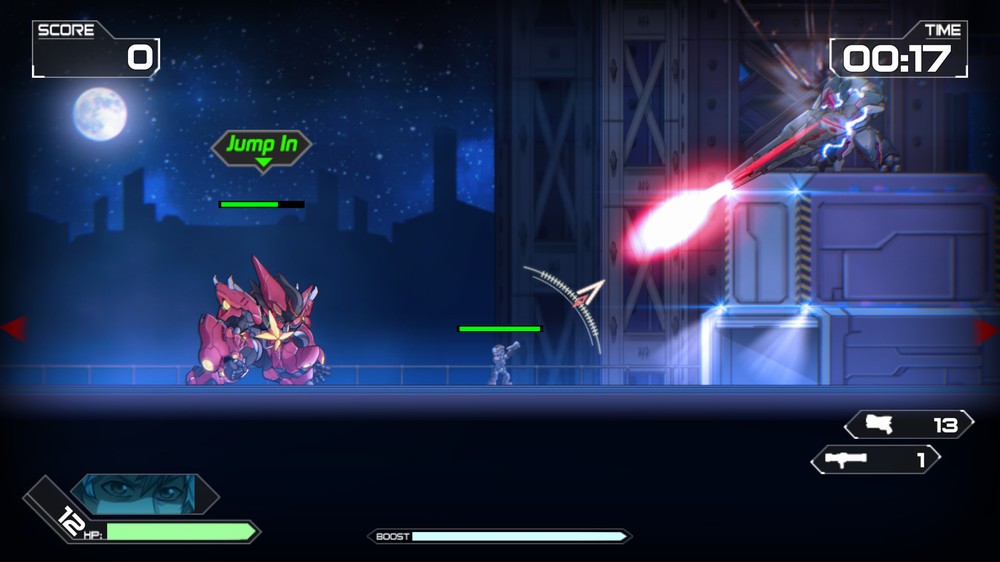 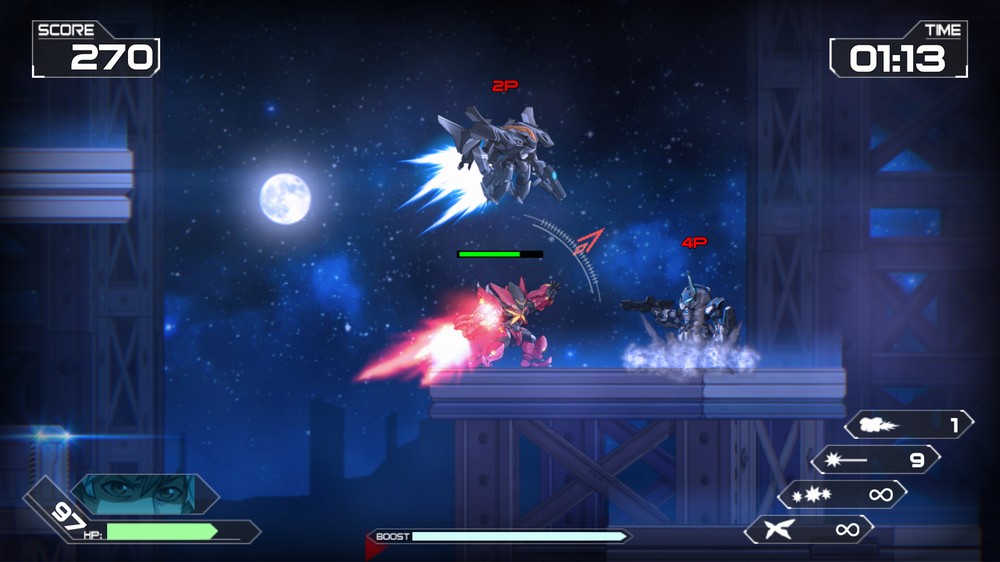 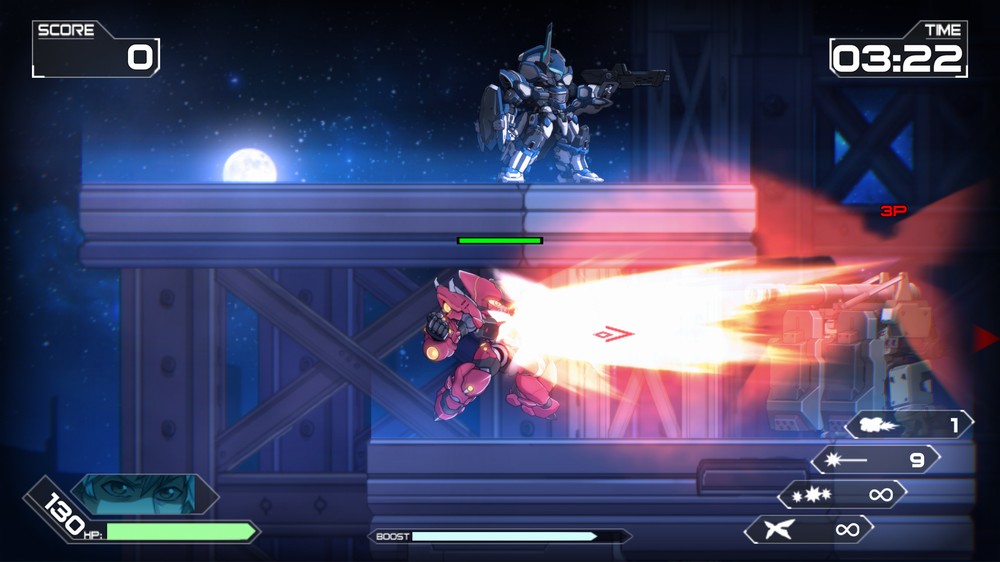 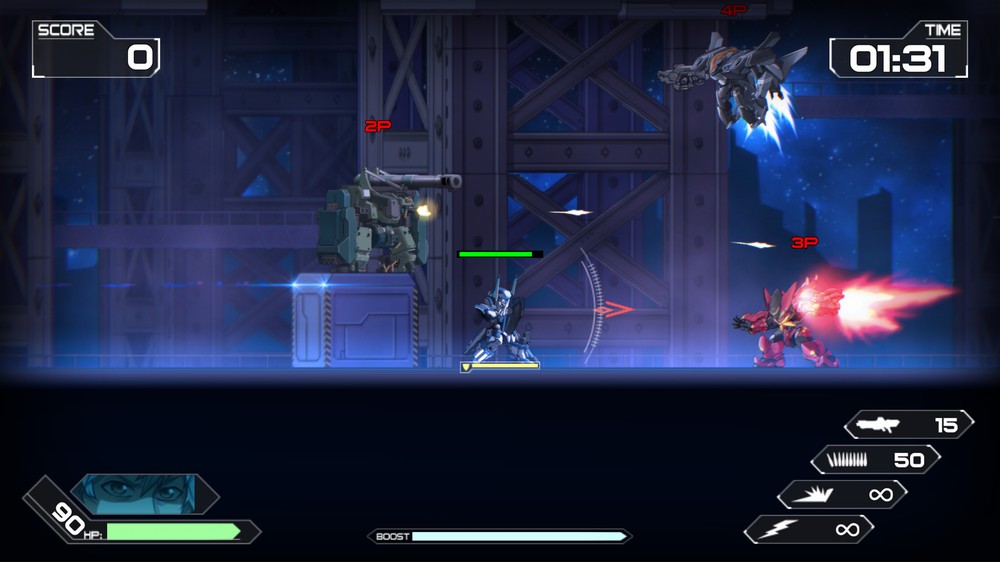 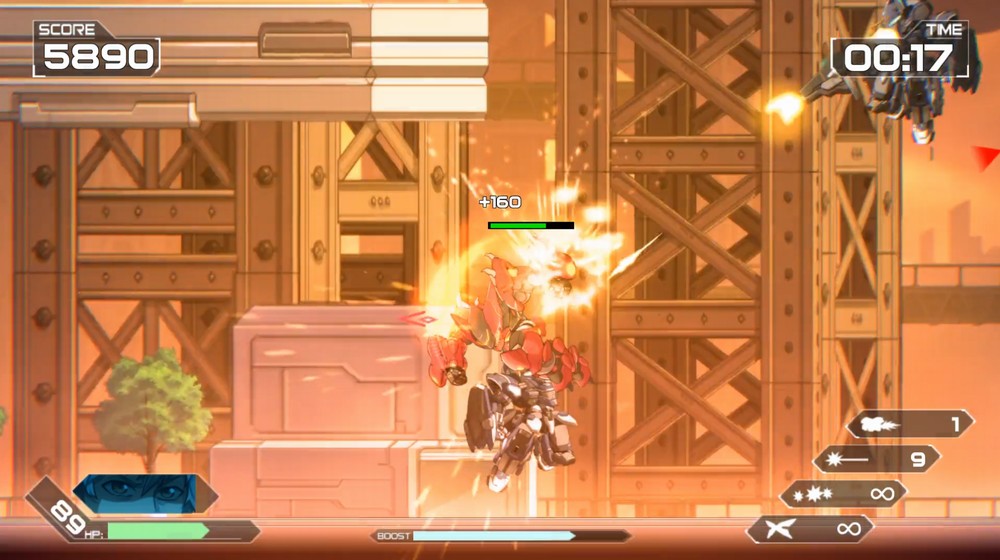