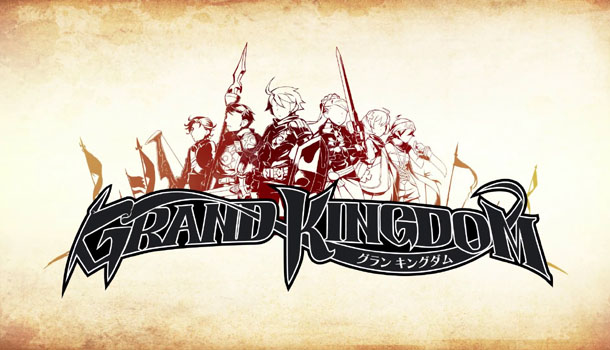 A very polished package that is as enjoyable to look at as it is to play.

There can be only one…kingdom. At least that is the premises and ultimate goal of the newest tactical RPG Grand Kingdom released for the PlayStation Vita. Grand Kingdom isn’t like most tactical RPGS though as I soon found out once I got past the opening moments. Tactics are very much a part of this title though the execution is what I enjoyed most about Grand Kingdom.

The story kicks off with your squad of mercenaries claiming a momentary victory after you best your foes on the battlefield. Though that is all crushed when the army you’re fighting for surrenders rendering your squad services moot. Enter opportunity in the form of the man just begging for his life not moments before to join “The Guild”, no not that one, after showing your prowess on the field. This group of mercenaries is led a legendary swordsman called Godfrey which you meet after an entrance initiation exam of sorts.

The entrance exam not only gets you into The Guild but acts a clever way to introduce players to the mechanics of Grand Kingdom. It is a good idea to pay attention to the rules instead of blowing right through them or you might miss a cool feature like the ability to find ways around tough encounters on the battle map or hit targets in adjacent lanes in combat. Lanes? Yeah when I said Grand Kingdom wasn’t your traditional tactical RPG, I meant it. 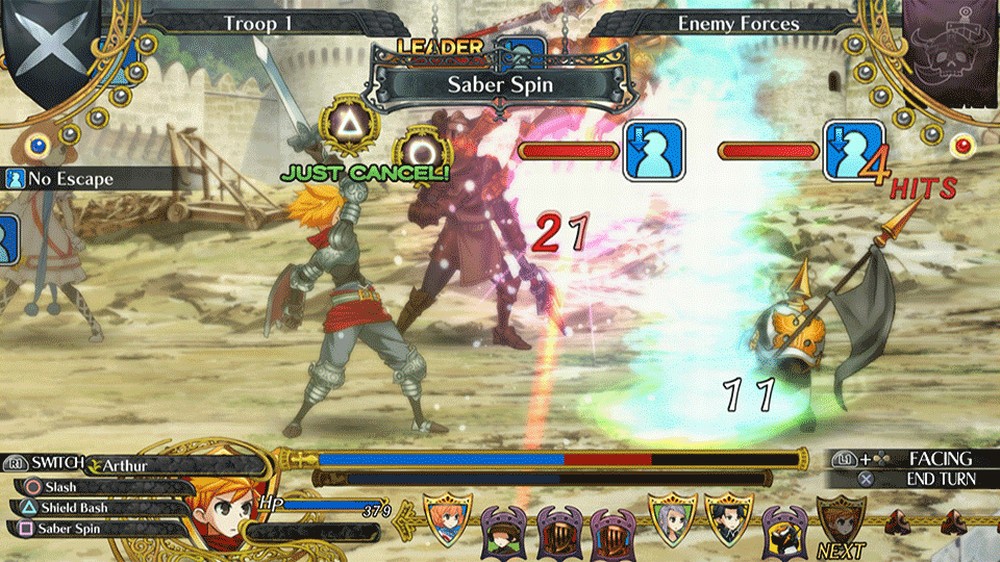 Combat takes place in a 2D side-scrolling screen unlike the usual grid based isometric view that most players are accustomed to. To add some complexity to combat units are placed on one of three horizontal lanes. All units can move a certain number of moves including switching between lane before their energy runs out. They can either attack a nearby enemy if available or guard until their next turn.

There is plenty of variety when it comes to unit types to face as there are 17 classes in which to customize your team with so have fun finding which team works best for you. No matter what you choose it’s important to note that there is such as a thing as friendly fire in Grand Kingdom to the point that allies will actually apologize when it happens in combat. So if you’re using ranged classes like mages you will hit everything in your spells way including your allies. The same goes for healer as it’s possible to heal the enemy instead of an ally if you’re not careful.

Friendly fire is not your only obstacle that you have to deal with as you’ll quickly be taught about actual obstacles on the battlefield as well such as barricades that hinder your movement in a character turn. It’s even worse with hidden traps that launch you airborne with a fiery surprise or warped back to your start zone when you’re so close to defeating a foe. Much like traditional tactical RPGs positioning also plays a part into combat as you chain attacks. I know I went up against groups where keeping your enemy off balance was a must so plan carefully and utilize combos as much as possible. 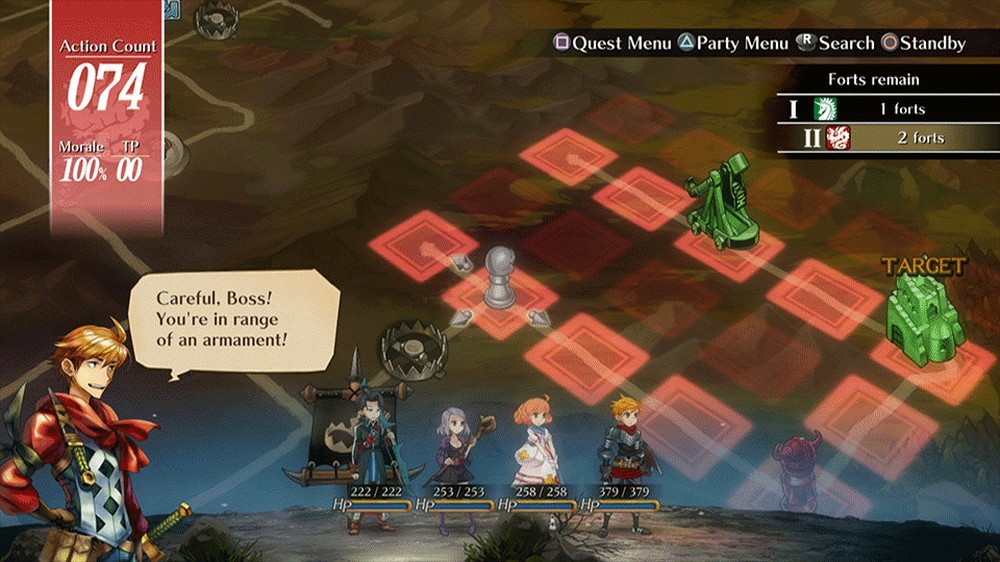 Combat is a big part of Grand Kingdom though like any good RPG there are other elements such as bit of exploring such as the quests that you take to progress the story allows. On each quest map the objective is usually get from one corner of the map to another to finish the quest but sometimes you have to get through undetected or defend certain points along the way. This is where the controls are a bit annoying. Unlike the combat screen, the quest map is isometric so you are moving your unit indicator like a chess piece along angled fixed path. As you can imagine hitting the correct D-pad input or Left Analog direction is crucial at time to avoid fights as some enemy units run patrols visibly on the map. Each move also ticks down your maximum move allotment to complete each quest. If you exceed it you fail the mission no questions asked.

It’s easy to want to fight every enemy group you come across to grind to level up but that’s not always the best thing to do. Sometimes you need to avoid them as either a quest requirement or as a way to reserve resources like salves for when you really need them. So using skills like Treasure Warp to get past foes or environmental issues like say lava is an awesome feature of have. There are also treasure chest to open throughout each map with are pure loot without strings so make sure to get those turns allowing that is of course.

The only real issue with any party based RPG is that you always end up with a roster that far exceeds your maximum party size leaving many a useful character under-leveled and underutilized. That isn’t the case with Grand Kingdom especially considering that the single player campaign isn’t the only facet of gameplay to be found. Players can use these characters in Grand Kingdom’s online mode which isn’t that dissimilar from ESO’s PvP mode in practice. 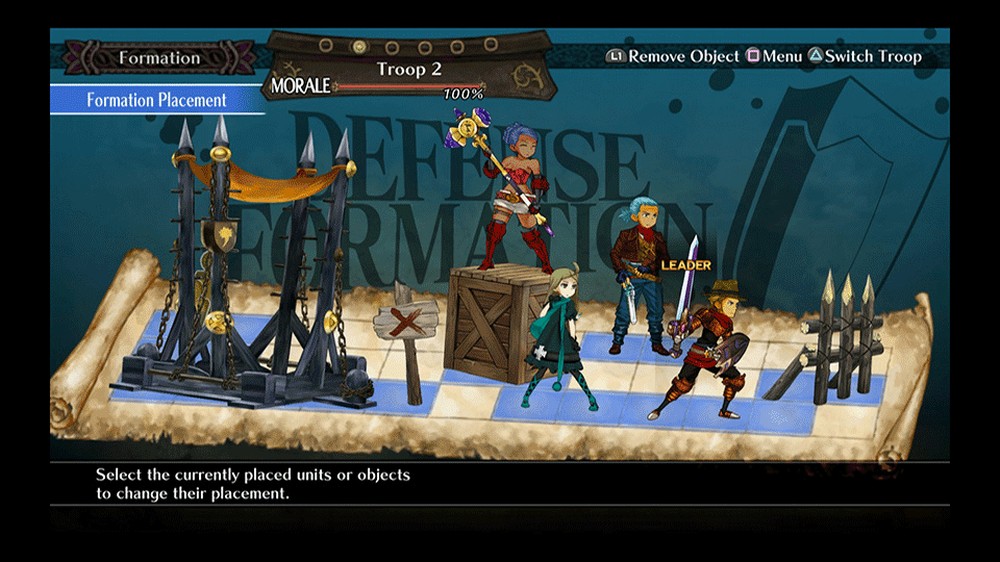 The biggest difference is that you have the choice to fight other real players manually or just send a party in to be controlled by AI after signing a treaty with one of the four kingdoms that are vying for control over the continent of Resonail. Being a portable system time is always a factor to take into consideration so the AI option is great for those that want to play but have limit time or Wi-Fi access. The downside of Grand Kingdom for the Vita though is that the load times don’t always make it is to be quick. Some of the load times between fights and modes run a bit long which doesn’t help for someone short on time.

This is a big part of Grand Kingdom’s longevity as player with side with one of the kingdoms at a time and fight in their honor. The issue I found is that no matter how many battles you win or lose you can still lose a war without really knowing what attributed to your ultimate defeat. That said you can switch kingdoms once your treaty with another ends if you what to try the others though like most online faction games there is bound to be one or two factions that most players will side with.

With the Vita you also run into the problem of actually needing to be on Wi-Fi to really make use of the online portion of Grand Kingdom so those without will be missing out on a chunk of the game without it. One thing that I though was cool about Grand Kingdom is that it is a Cross Play title so you will also be going up against PS4 owners as well as Vita ones on the same server. There is a lot of depth to be found in the online mode including invasions and more importantly treaties that change the very rules that each war as to follow like the banning of escape attempts. 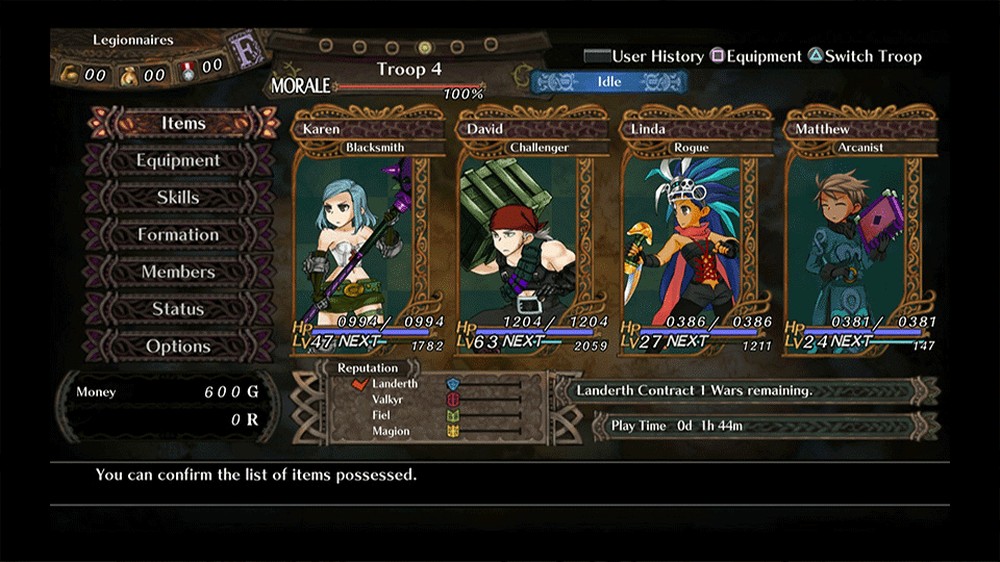 If the online part of Grand Kingdom isn’t for you, there is plenty to do with the single player experience. There are no less than four campaigns to clear so you’ll be busy. Each one is told from the perspective of each of the four nations each one unique but with the same basic goal of supremacy of Resonail. The real nice thing about the North America release of Grand Kingdom is that it 3 of these campaigns as well as some of the character classes are included for free with the release where they were paid DLC in Japan.

All of Grand Kingdom’s content no matter what you decide to tackle is brought together with a strong visual package, score and voice acting. The music is perfect and doesn’t get old especially in combat and the game does feature an actual English track for the North American release with a strong vocal cast to bring the story to life. The visuals are remarkably vivid and smooth in combat and I love fact that the character models actually move a bit when you viewing the story elements throughout instead of being changing stills.

Between the character design by artist Chizu Hashii (Blood+) and the creative vision of director Tomohiko Deguchi (Muramasa: The Demon Blade), Grand Kingdom has a very polished package that is as enjoyable to look at as it is to play. So, no matter if you stick to the single player campaigns or join in on the battle for control of Resonail online, Grand Kingdom has a little something for everyone. If you want to try out a tactical RPG that has a unique change of pace be sure to pick up or download Grand Kingdom for PlayStation Vita today. 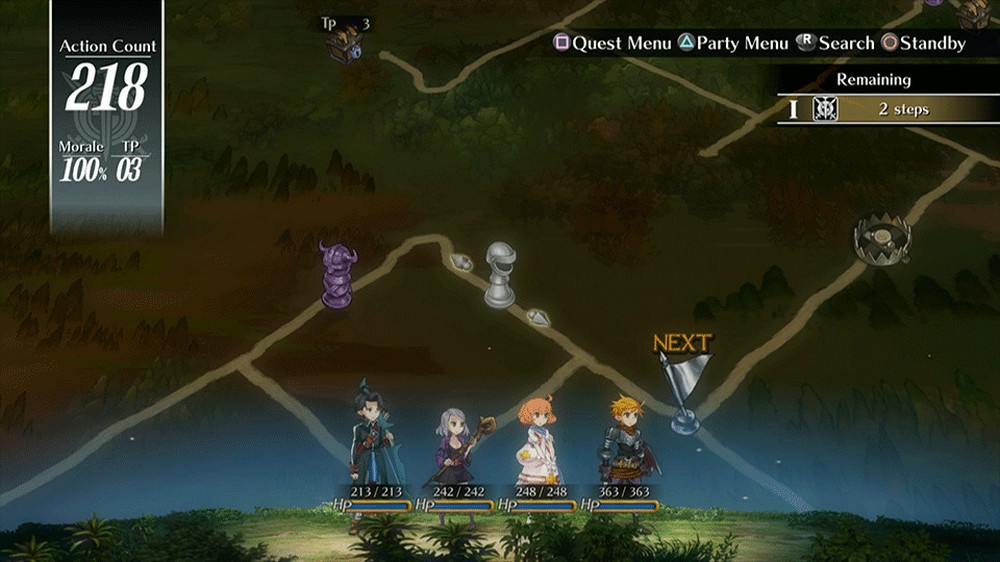 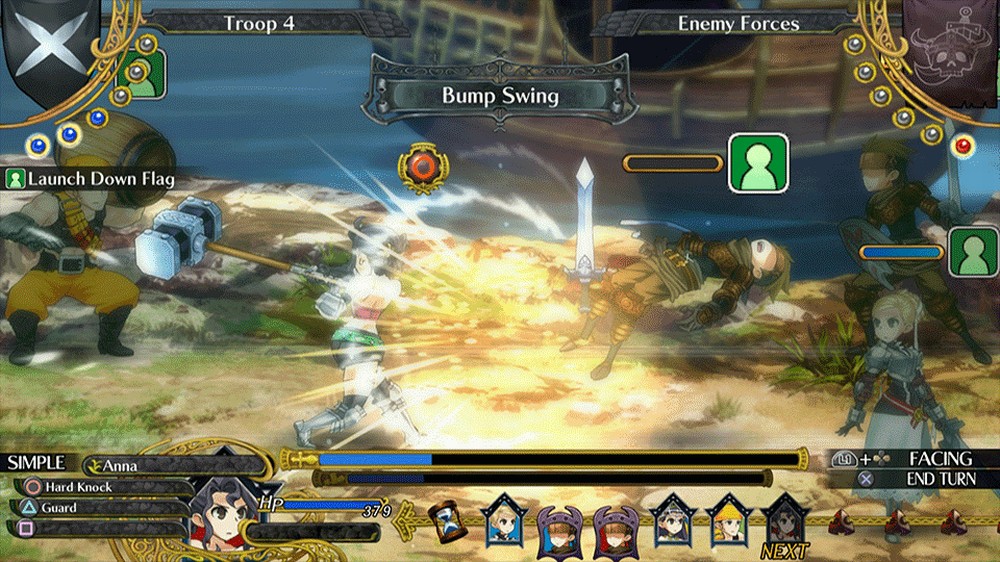 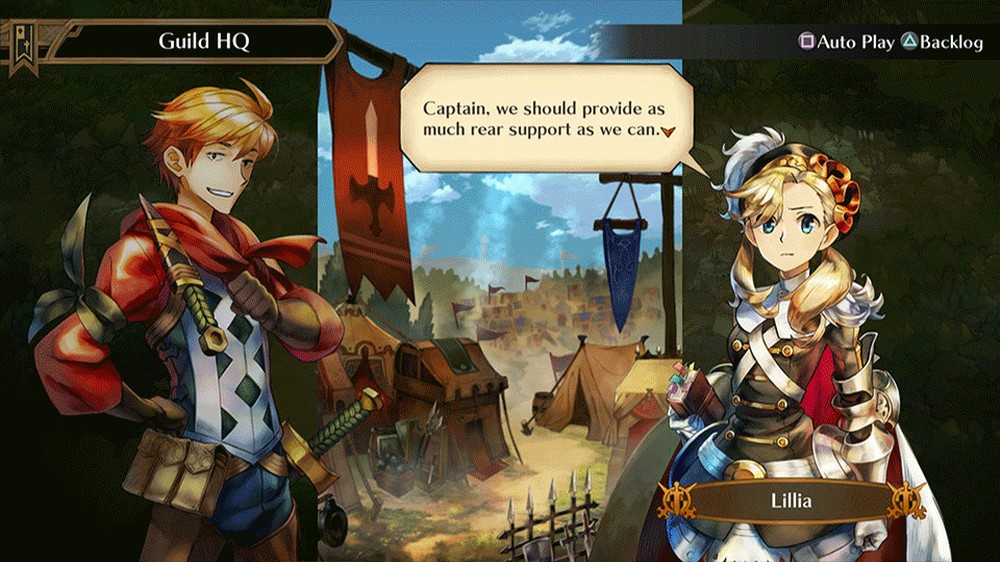 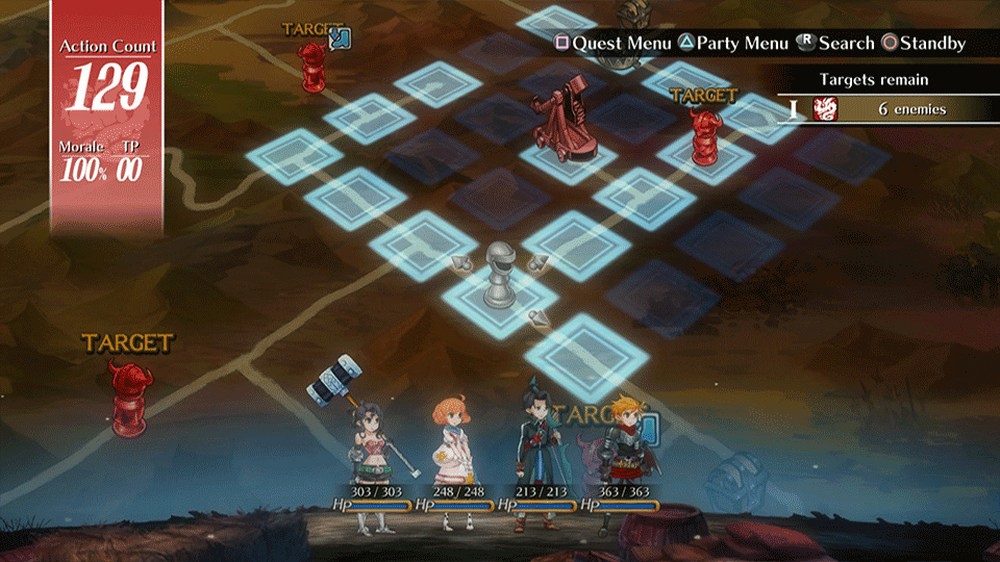 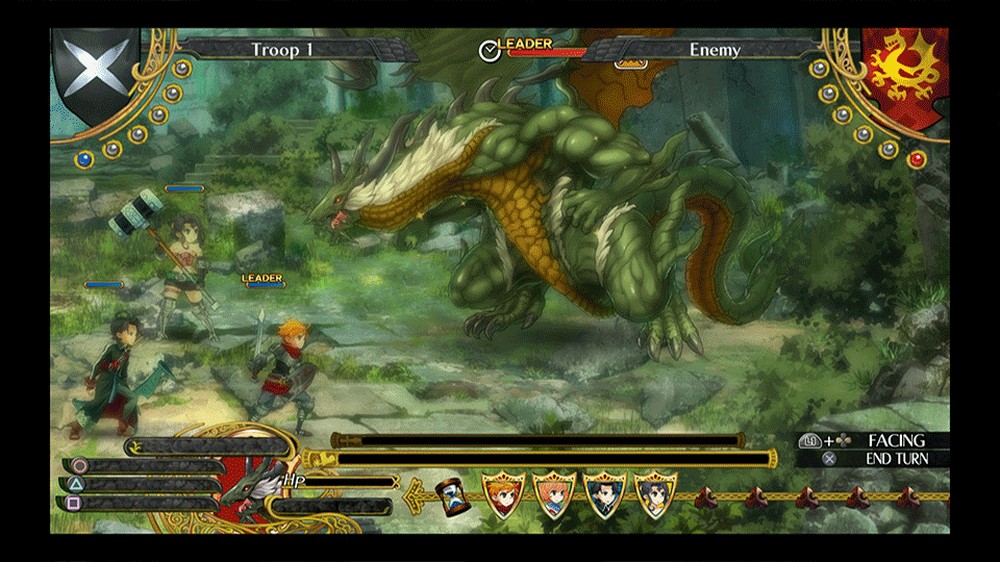