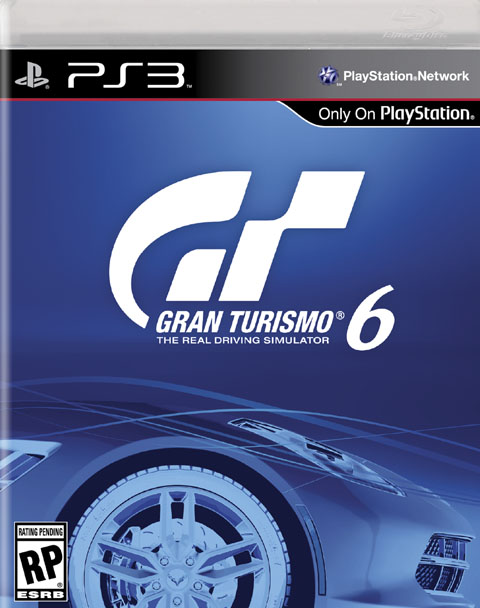 Licensing system limits your car choices and even online accessibility right out of the box. Major features like the Course Maker and GT mobile app are missing at launch pending future DLC. Poor DualShock 3 controls.

Gran Turismo 6 is certainly the best looking and best driving simulation I've played on the PS3.

Racing games are my guilty pleasure. I can easily kill a whole day racing around Burnout’s Paradise City, or Forza, or any recent incarnation of Need for Speed. Sometimes I even throw in some old school Flatout for demolition derby goodness.  I suppose it’s because ever since I was a little boy, I always wanted to be a race car driver.  Owning Gran Turismo and a Logitech racing wheel is the closest I ever got to living the dream. But it sure is fun to dream on the PS3.

But just to be clear – Gran Turismo 6 is a driving simulation, not a crashing simulation. If you are looking for crashing games go get Burnout Paradise from the discount bin. Gran Turismo 6 is great at what it does, and that is simulating the driving experience of a bunch of different styles of cars – both street and racing cars.

Gran Turismo 6 especially excels while using a force feedback steering wheel. Gran Turismo 6 supports the major wheels from Logitech and Thrustmaster which only enhances the driving simulation. Actually, driving with a DualShock 3 controller is not that fun an experience at all. It’s nearly impossible to keep a line and really makes instant replays look like the driver has a serious neurological disorder. So get a wheel. Trust me. 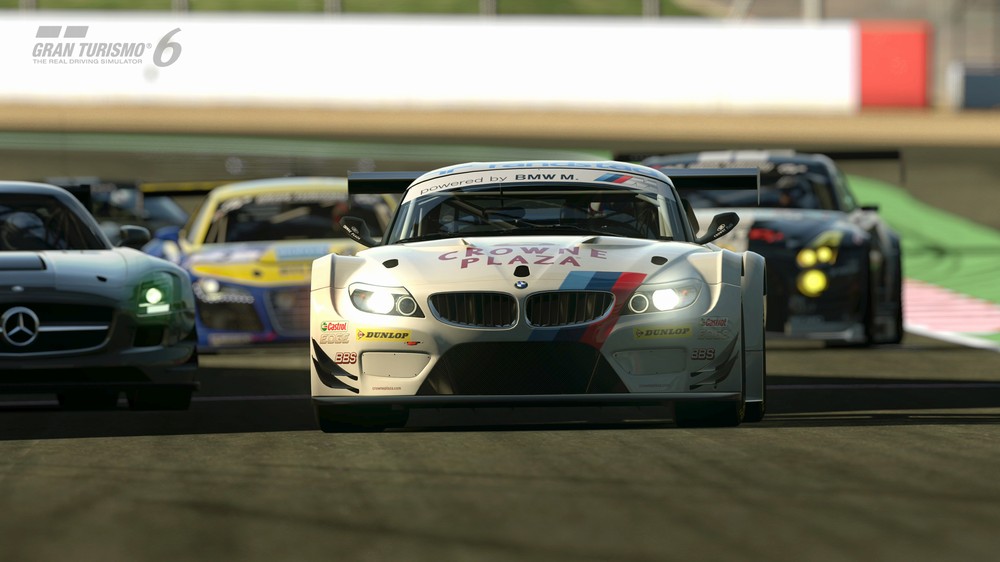 A couple years ago, Gran Turismo 5 took over as my favorite driving simulation of all time. The addition of NASCAR and realistic kart racing really monopolized a lot of time. The somewhat limited NASCAR inclusion was even better than the actual fully licensed NASCAR: Inside Line game. But that’s what happens when you have a quality development studio like Polyphony.

I was a little surprised to see Gran Turismo 6 on the release schedule. Polyphony is legendary for taking their time to get things right before releasing a game. In interviews they now speak with confidence in their ability to push the PS3 to its limits. Also with the PlayStation 4 coming out it was a little surprising to see them release Gran Turismo 6 on “last gen” PS3.  But I couldn’t wait.  I had high hopes for improvements in all my favorite areas – especially the track construction module. For some reason, making my local indoor kart track in Gran Turismo is important to me; probably because I’d like to practice before going to the real track to try and break their records.

Gran Turismo 6 has a lot of small detail improvements that are a pleasant surprise. The little details yielded much better load times, clean menus, and a wealth of new cars and tracks to play with. Polyphony collaborated with several new technical partners (Yokohama, KW Automotive and others) to rewrite the physics model at the heart of the driving experience. The results are noticeable from the start with improved tire and suspension simulations and even the aerodynamics are more realistic. 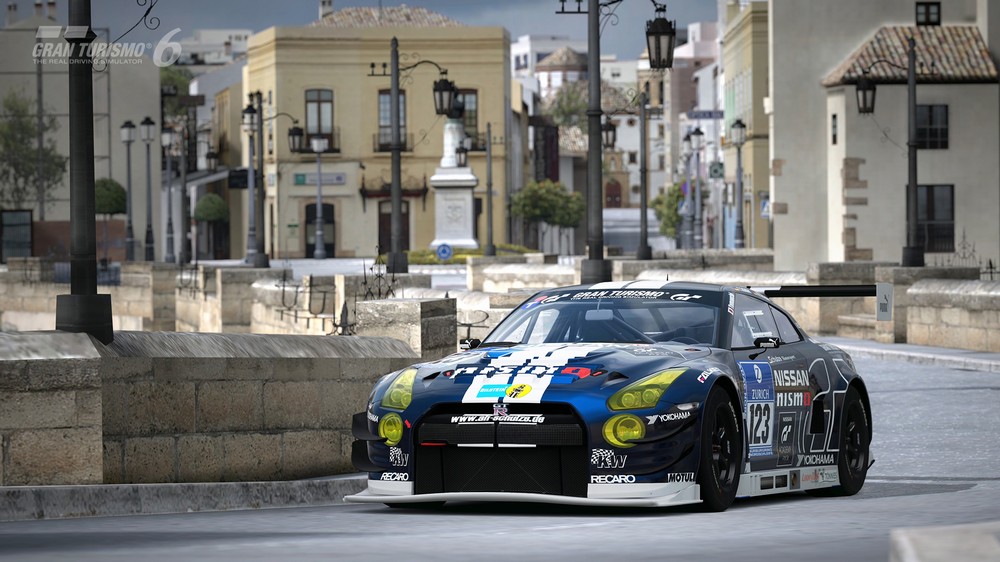 Graphically Gran Turismo 6 really has stepped up to push the PS3 to its limits. Little details in the road and building textures are easily seen as a step up from Gran Turismo5. Trees and other landmarks look amazing, to the point of wondering how they could improve this for the PS4. Yet there are still some frustrating oversights – particularly little detail items like track logos. The logo for London and some other tracks have some horrible bitmap stairstep artifacts while the text is crystal clear. It would have taken someone in the graphics department five minutes to fix this particular issue. While it doesn’t affect gameplay and is certainly a minor issue, it was so bad that I did notice it.

But the good news is there are over 120 new cars added to the already impressive lineup, pushing the total to over 1,200. The inclusion of cars from Jay Leno’s garage to a couple of Tesla electric cars really make Gran Turismo 6 a car lover’s dream.  The impressive 1,200 car lineup is a huge mix of novelty to NASCAR and take Gran Turismo 6 to a new level of driving simulations. In a move to keep Gran Turismo 6 fresh, over 28 car manufacturers created special cars for Gran Turismo 6. The cars will be made available at various times in 2014 as the manufacturers debut them in major auto shows.

Again this year, Gran Turismo 6 sets the bar high will 37 track locations and over 100 layouts. For example, Indianapolis Motor Speedway isn’t just an oval track; it also has several configurations for a very curvy road course and things in-between. Many tracks have day and night settings available too. 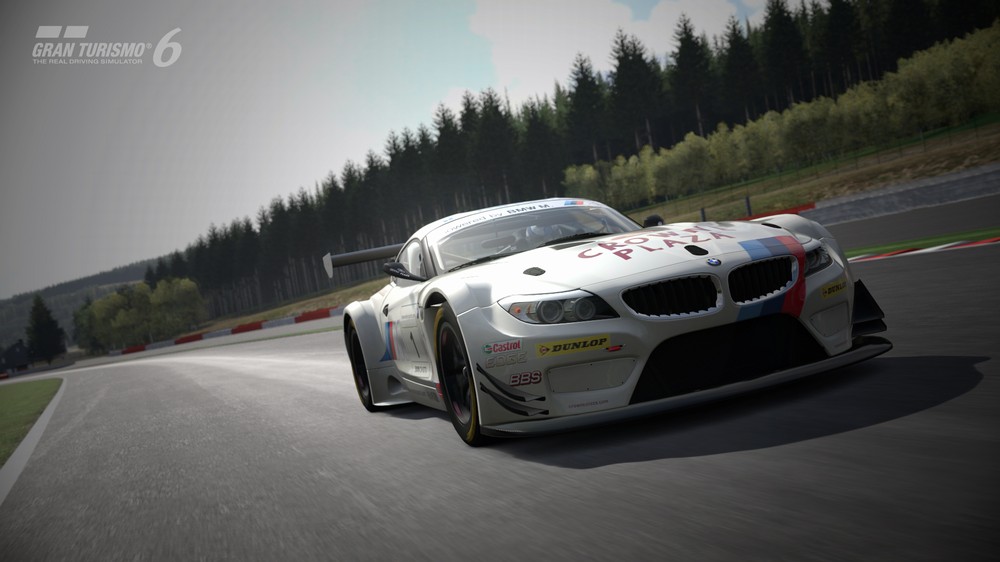 Sony/Polyphony have, of course, adopted the EA Sports method of riding the cash cow of micro transactions.  Gran Turismo 6 isn’t as creative about it though. They basically use real money to buy in-game currency credits via micro transactions. You can use those points to buy cars and upgrades. I get it; they need to do what they can to make more money to support development of these games – especially ones that have to license real world cars. But if you can’t afford or don’t want to drop even more money on a game, you will spend a lot of hours racing just to get enough coins to buy anything. $5 will get you 500,000 credits, $10 = 1,000,000, $20 = 2,500,000, and $50 = 7,000,000.

Despite the recent release of Sony’s next-gen console, the PS3 is far from dead, and Polyphony will continue to support Gran Turismo 6 with future DLC updates including the Course Maker. Also coming is a GPS track regenerator which in theory will use your smartphone’s GPS to map your drive to work and put it in Gran Turismo 6. If the Course Maker is good enough to edit your GPS route and place lights in appropriate intersections, this could be an amazingly fun addition. Both features have the potential to really change the way racing games/simulators are used.

It’s great that they continue to develop and add new features after the game is released. It potentially could lengthen the product life cycle. The problem is people tend to play games for a month or two and move on to the next big thing. If Polyphony doesn’t release the DLC soon, people probably won’t know or care much about it. 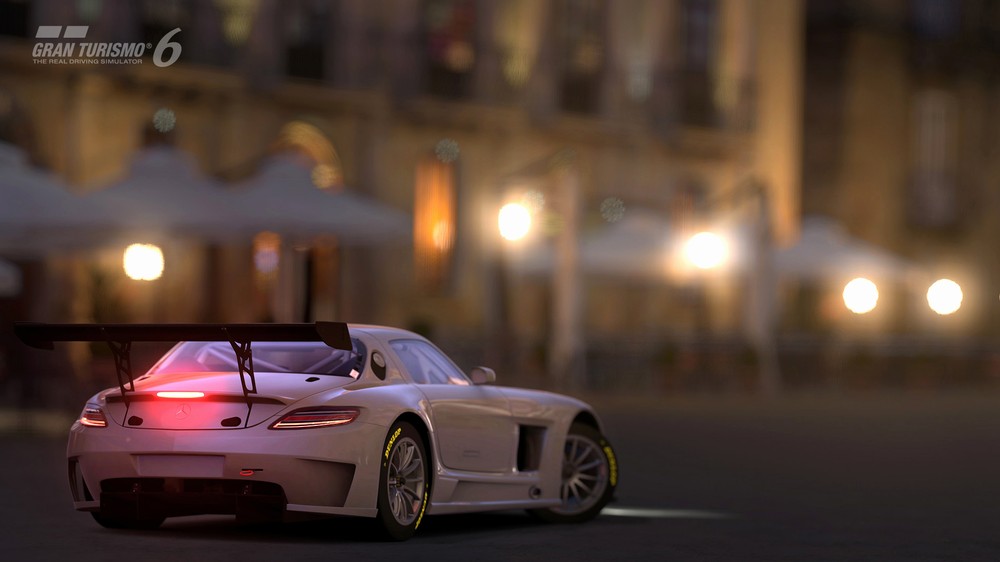 Online play has some significant improvements in Gran Turismo 6. Well, it will have…. but not so much yet. What is there you won’t get to see until you pass your National A License test. People pay good money for this game and can’t access some basic functions right out of the box. I applaud the attempt to weed out the race wreckers, but the training wheels could come off a little sooner. The gist of online play is you can race friends from all over the world in your own communities and online events.  That, in and of itself, isn’t too innovative. The really great innovation is the use of a GT mobile app to add more community features. But that is also coming in a future DLC update.

Let’s face it; Gran Turismo is not an arcade racer, demolition derby or battle racer…. it’s a driving simulation and that is a very specific segment of the console game market. Many consider accurate simulations to be boring – and driving simulations doubly so.  Console gamers tend to favor fun over realism so finding that balance is pretty tricky. Most hardcore driving sim fans are on a PC using iRacing. But for those who love their console and like to take all kinds of cars from many different eras out for a test drive, Gran Turismo 6 is the best you can get on the PS3.  The car models are almost freakishly accurate right down to the headlight reflections in the textured car paint. While the new physics engine, over 120 new cars and 7 new tracks is a big plus over Gran Turismo5, it feels like I’m missing a big chunk of the improvements in Gran Turismo 6 until the Course Maker DLC finally arrives for download on the PlayStation Network. 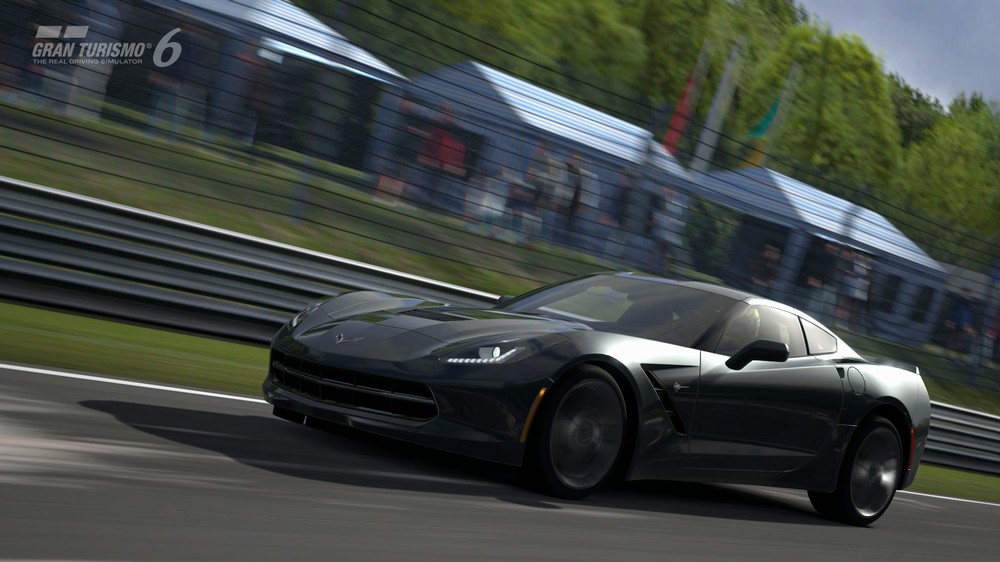 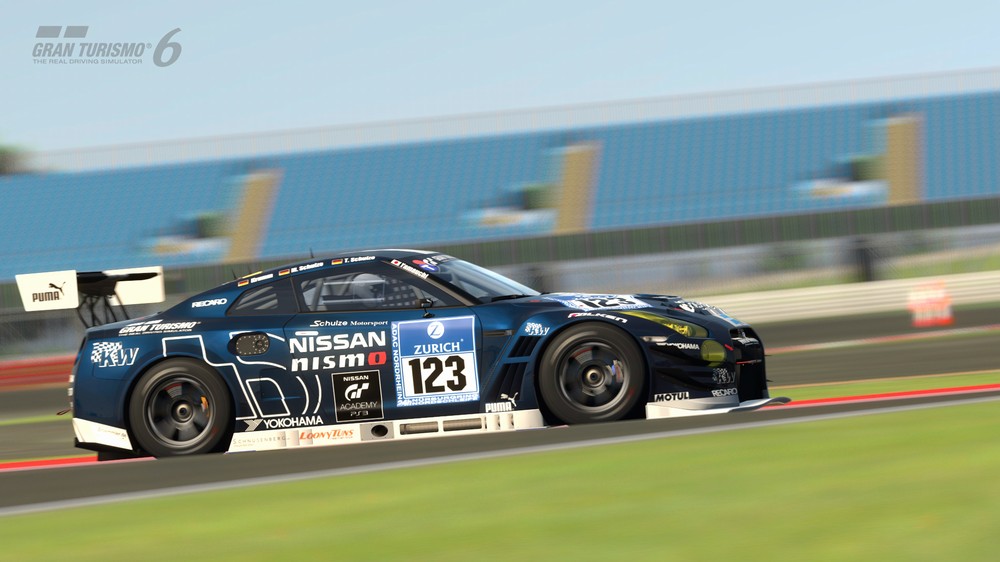 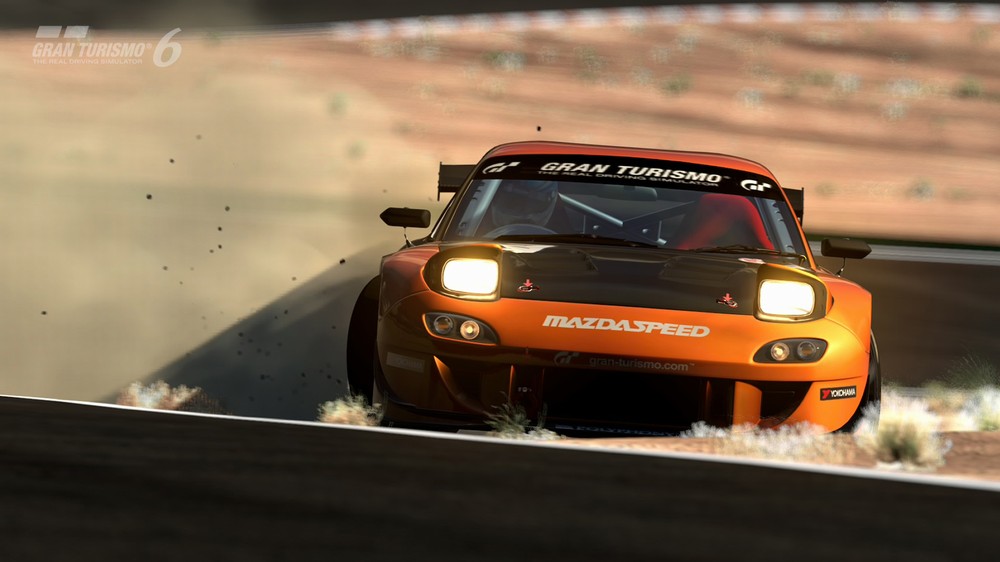 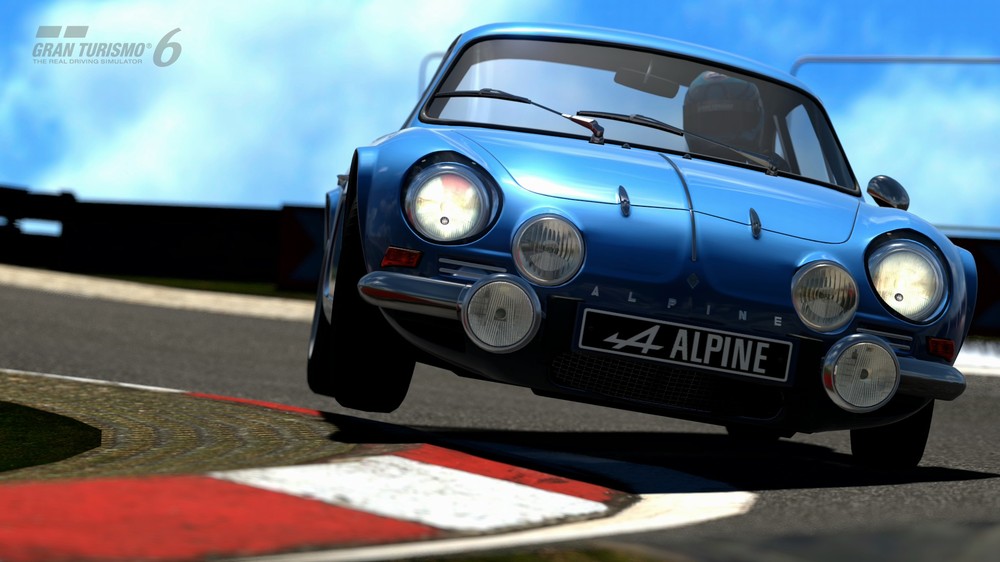 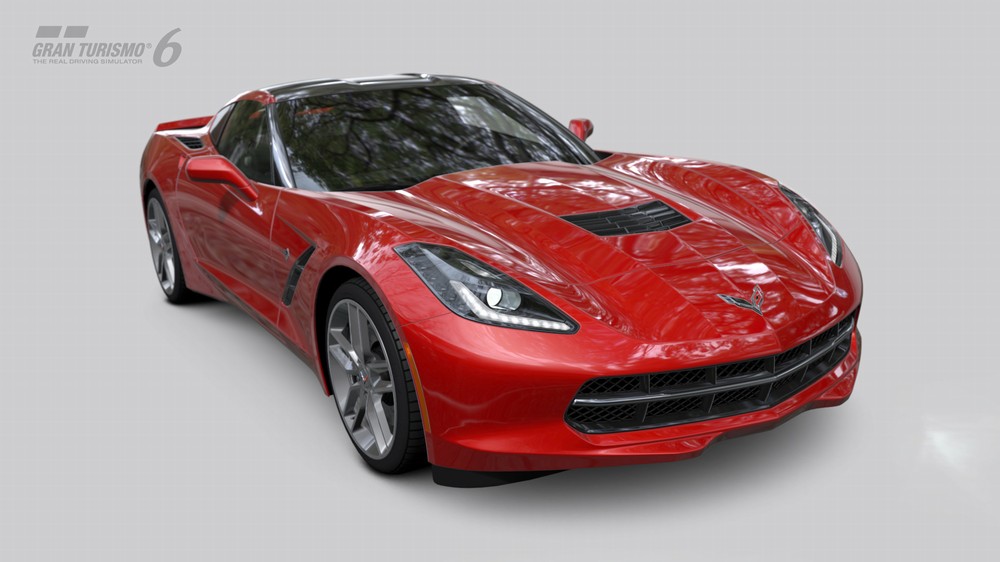 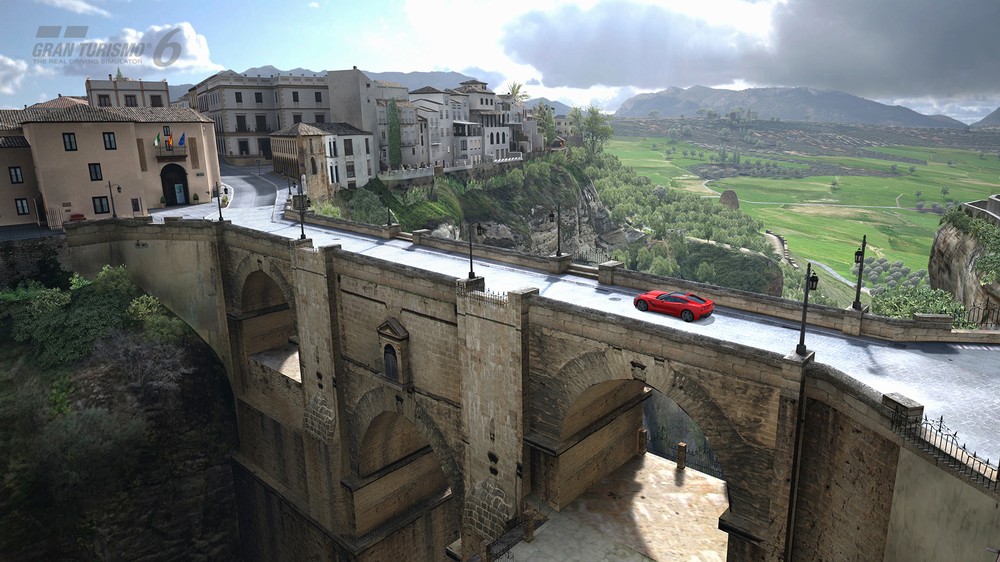 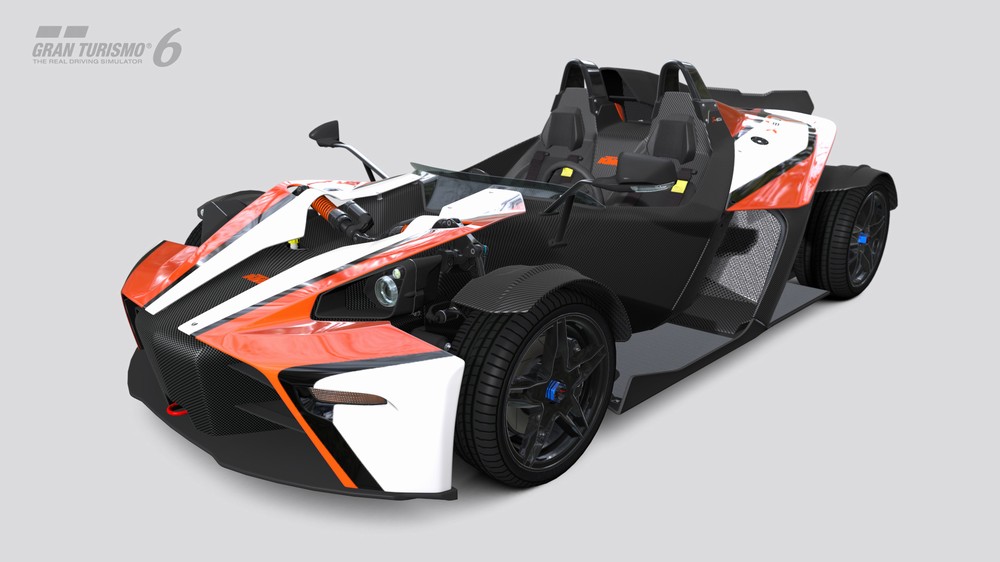 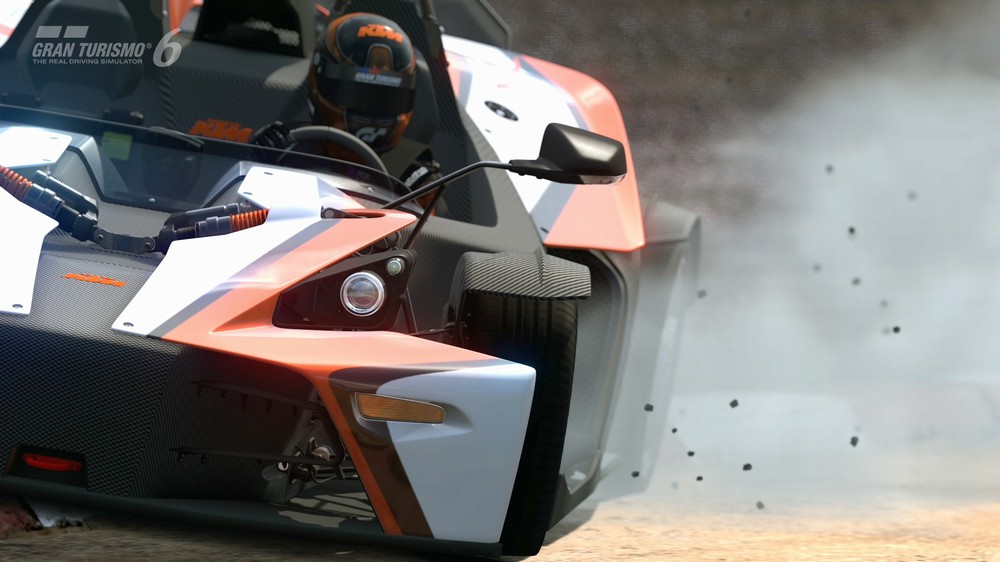 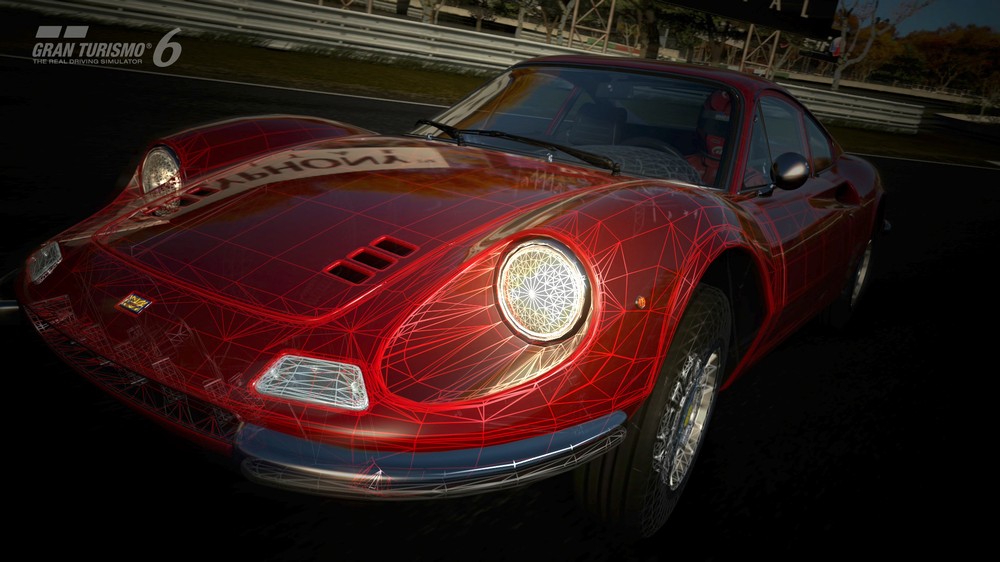 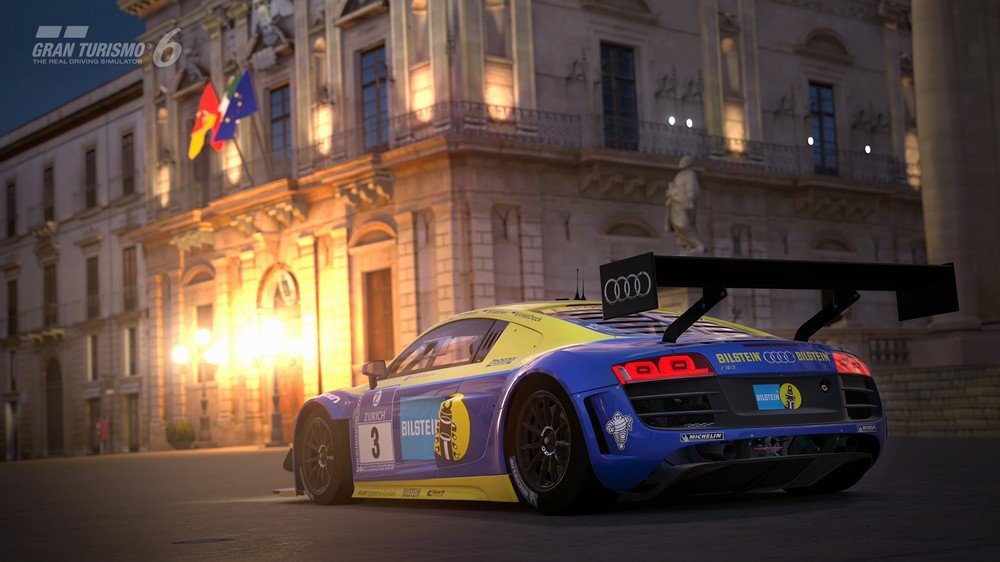 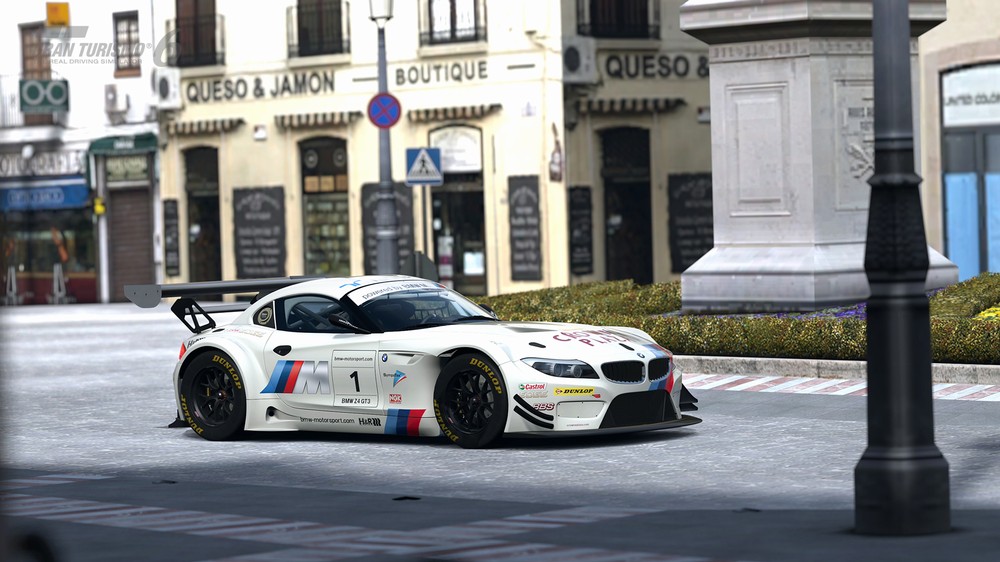 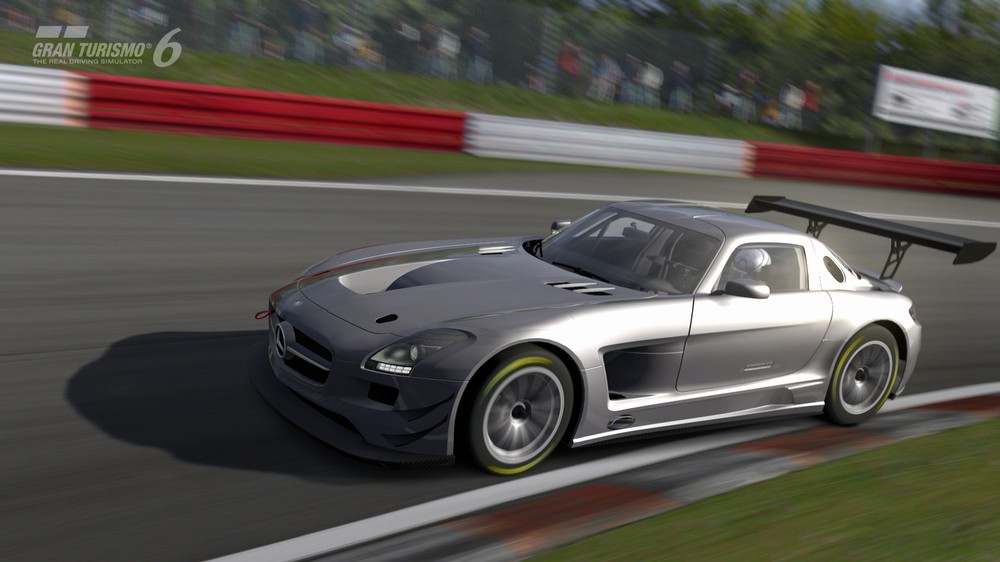 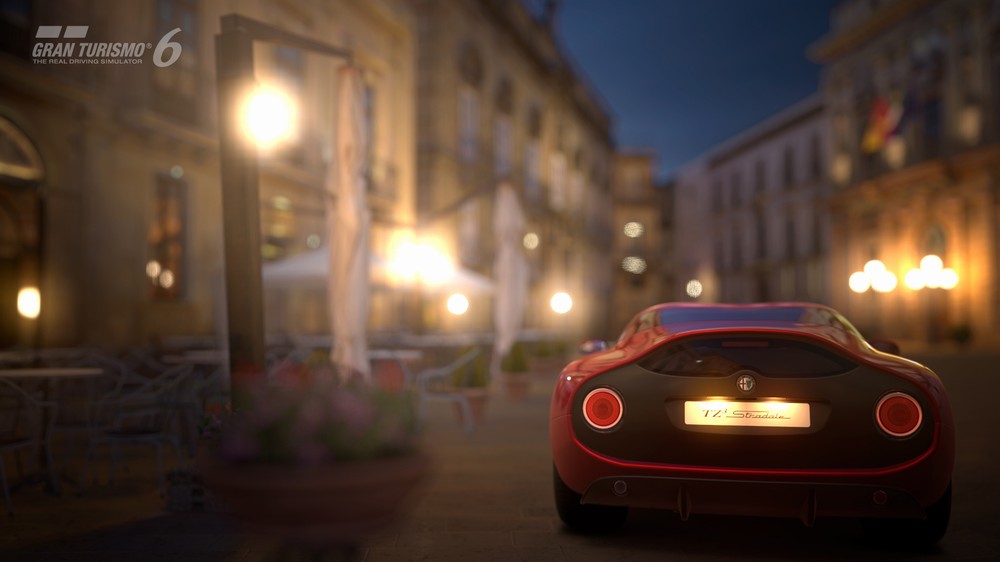 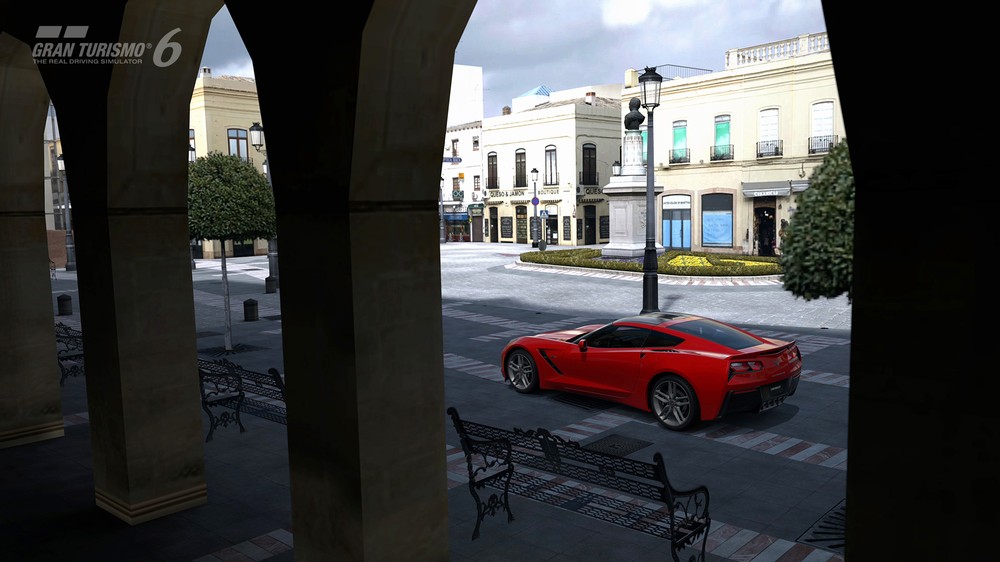 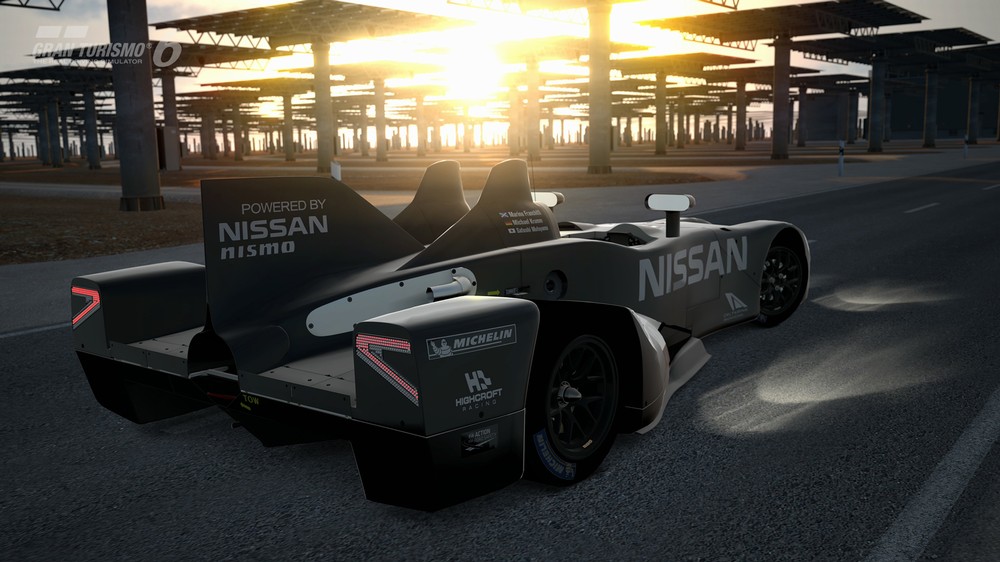 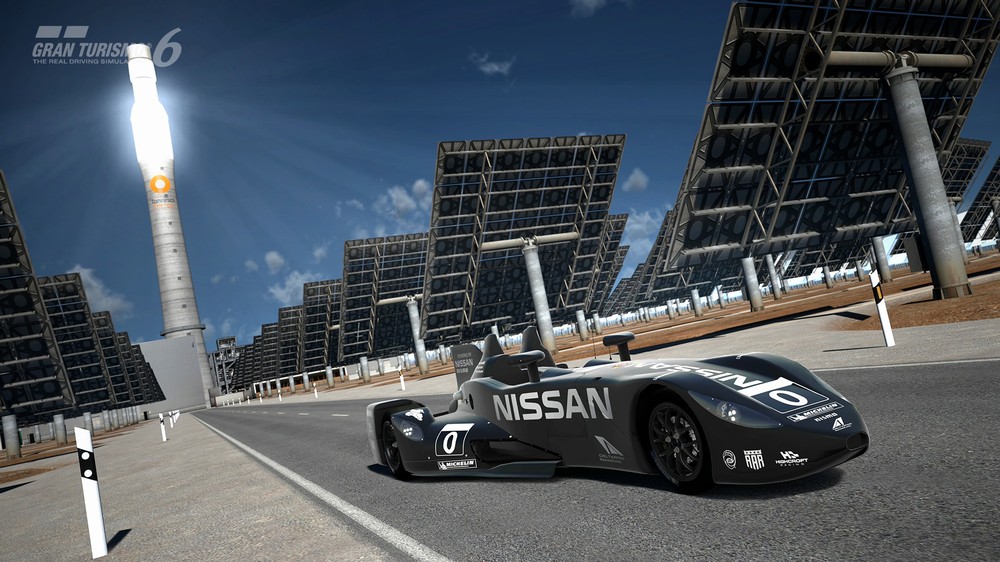 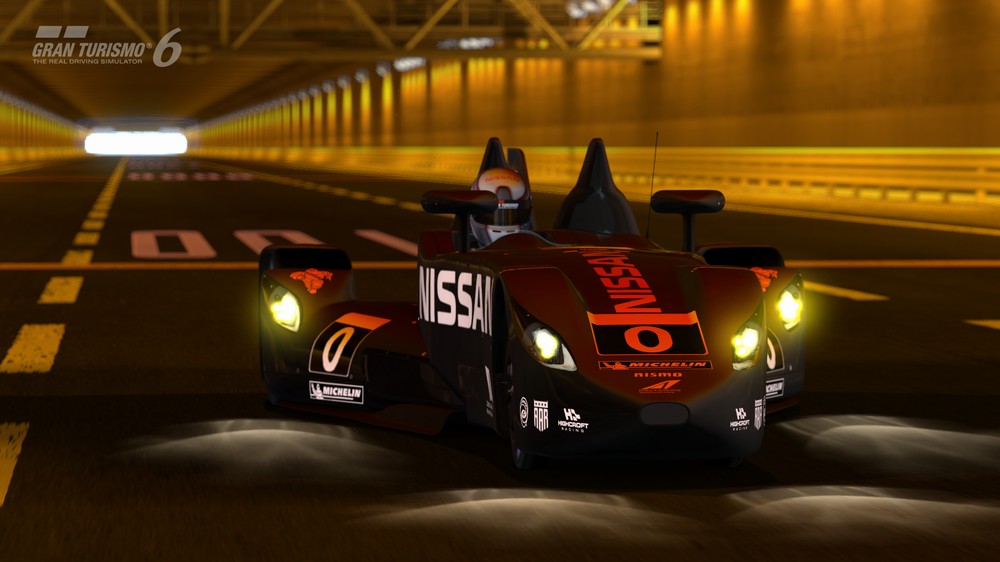 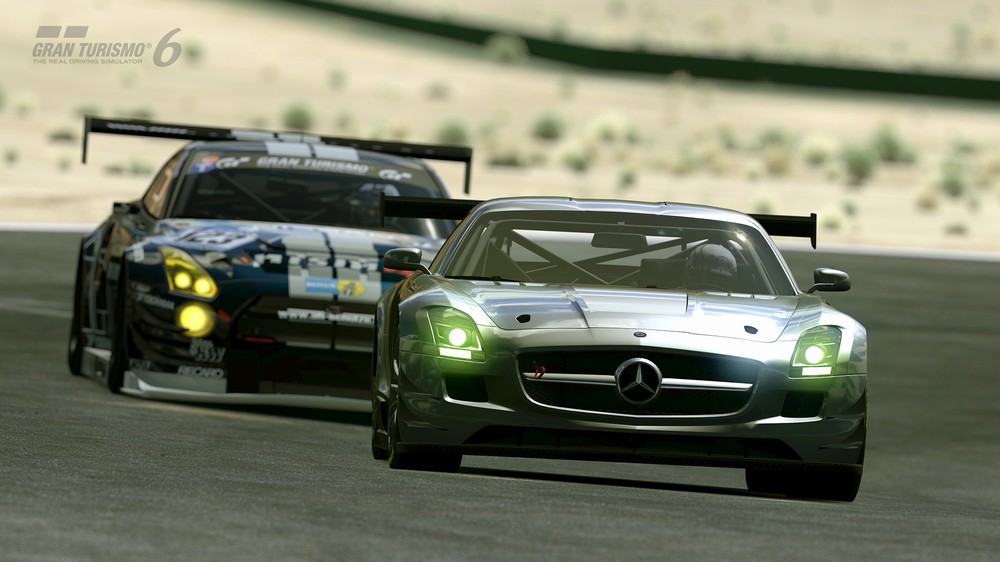 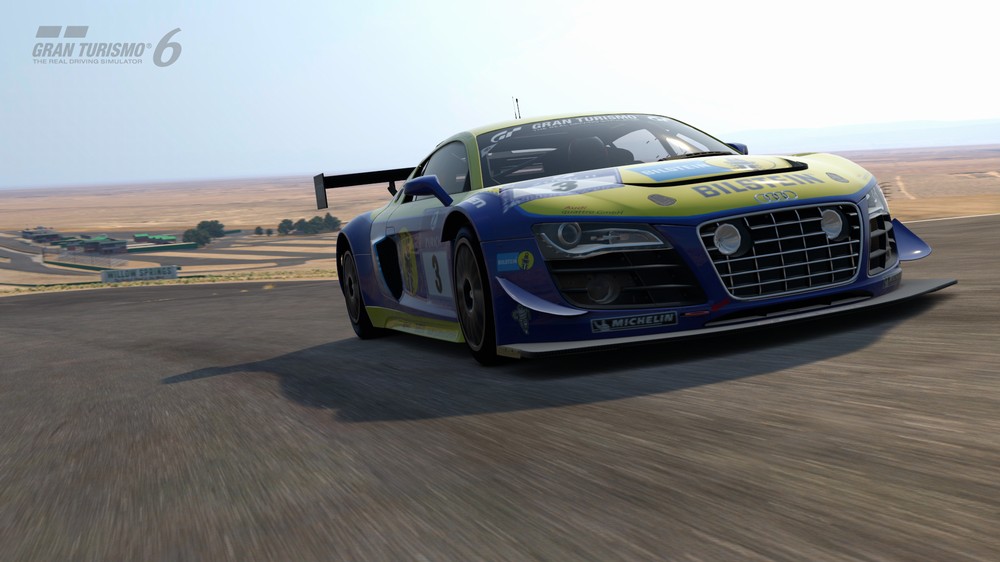 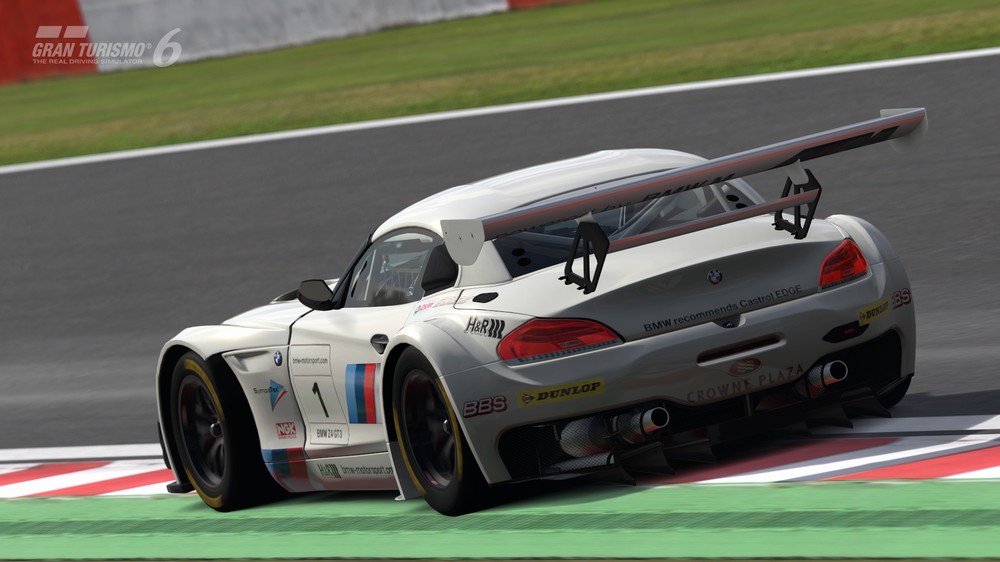