A small, intentionally broken, and arguably stupid game that will delight those with the right sense of humor.

I have to admit, sitting here starting my review of Goat Simulator, I realize it’s not the easiest title to review. For starters, it’s not exactly a full game. Rather, it’s an intentionally glitchy (often to greatly entertaining effect) joke prototype game that the developers themselves humbly describe as a “small, broken and stupid game” that was “made in a couple of weeks,” warning players to have low expectations, or better yet, no expectations at all.

Yes, everything about these statements is true. Yet, playing Goat Simulator was undeniably one of the funniest and maybe most startlingly entertaining few hours that I’ve spent on a game in the last few months. It’s one of those things that you might have to play for yourself, but I’ll do my best to at least share my experience with it.

In Goat Simulator, you play a goat—and not just any goat, but an indestructible goat with ragdoll physics and an impossibly elastic, sticky tongue. It can walk, run, jump, flip in midair, head-butt and kick things, and pick up and drag objects by licking them. The game starts you off with some silly quests (e.g., climb on something or jump five meters) that you can freely ignore. There’s not many of them, and you’ll probably naturally accomplish them anyway while you fulfill the goat’s true purpose of existence: to explore and wreak havoc on the small game map, which takes place in what resembles a tiny rural town. 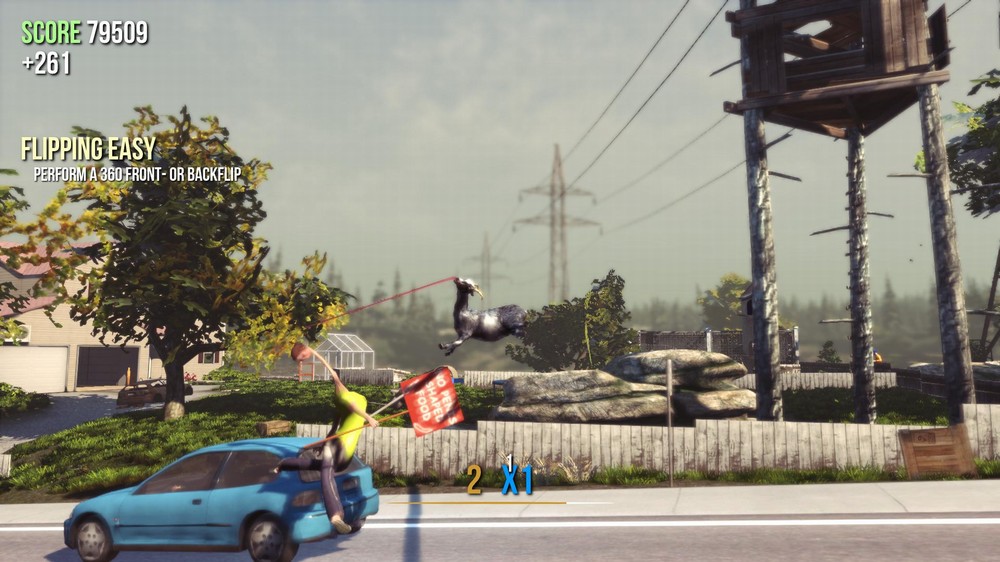 The game’s a lot more fun than you’d think, but it definitely takes a certain taste for inanity, destruction, and the tongue-in-cheek. I spent a good portion of the game head-butting flammable tanks and blowing myself sky-high, licking people to death, and kicking apart home interiors. Gleefully wrecking things and creating chaos was mildly amusing on its own, but the real hilarity ensued when mayhem combined with the game’s endless bugs.

These bugs were purposely left in the game by the developers, who fixed only those that caused the game to crash. As the developers admitted, the actual designed content is pretty sparse in Goat Simulator, but I couldn’t keep track of how many unintentional events had me bursting out laughing. I don’t want to spoil too much of the content because so much of the entertainment value comes from finding all the Easter eggs, but you can take my word for it that much of the game’s fun comes from the crazy glitches coming out of the woodwork and never really knowing  exactly what to expect. For instance, at one point, my goat somehow launched itself miles into the sky in a whirlwind of pink tongue (I don’t even) and promptly fell back to earth—then through the ground and deep into the unrendered nether. Good thing you can respawn at will whenever something like that happens.

And, after you’ve tried the regular game out, you can start a custom game with various optional “mutators” that give the goat additional characteristics, such as a back-mounted jetpack or the ability to let loose a destructive goat scream, a la Skyrim’s Dovahkiin. It’s also Steam Workshop enabled, so as of the time of this writing, there are already tons of user-made mods extending the Goat Simulator experience. 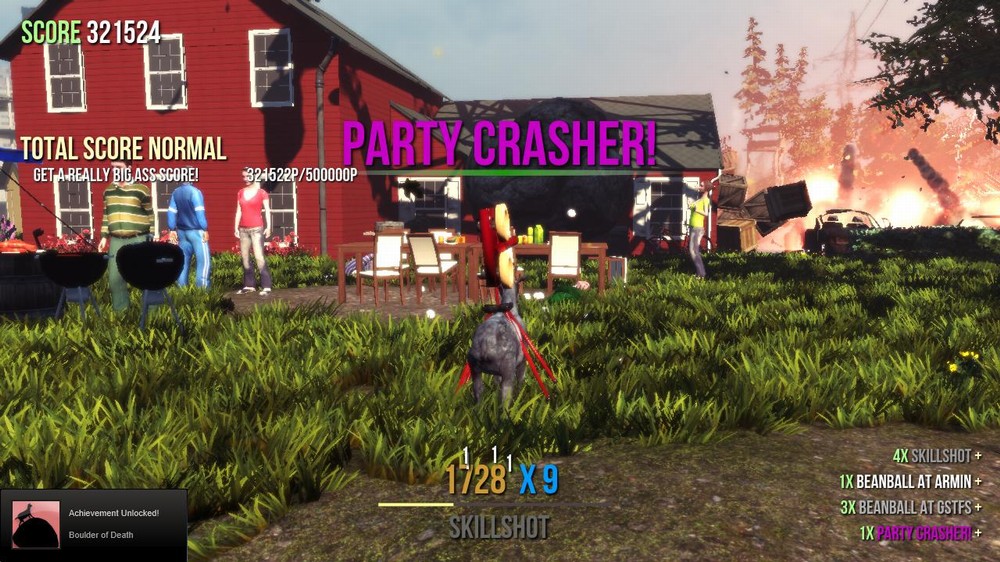 There’s not much point in me discussing the graphics or sound for a game like this, but suffice it to say that it uses Unreal Engine 3 and a physics engine, and its presentation simultaneously and humorously parodies niche-market sandbox-style simulation games (Rig ‘n’ Roll, anyone?) and skating/boarding titles like the SSX games. Goat Simulator is what it is.

Is it gimmicky? Certainly, but not more so than many typical casual games. Is it worth playing? I thought so. I’d go as far as to say that Goat Simulator was surprisingly thought-provoking in some ways, as it made me question what makes a game fun. In this case, it certainly wasn’t the story, characters, challenge level, or sleek presentation, but though I can’t quite put my finger on it just yet, I think there’s a little bit more to Goat Simulator than just pure novelty.

That being said, the price point ($9.99) seems a little steep to me for a single-player prototype joke game, even with its Steam Workshop modding potential and small set of Steam achievements, as the basic amusement factor tends to exhaust itself after maybe a handful of hours. Then again, I can’t say I’ve really experienced this unique flavor of entertainment before Goat Simulator, at least not since the 90s, when ordinary complete games commonly shipped with some pretty devastating (if hilarious) bugs.

In short, Goat Simulator is most certainly a small, intentionally broken, and arguably stupid game, but if you’ve got the right sense of humor, you might find it entirely worthwhile. 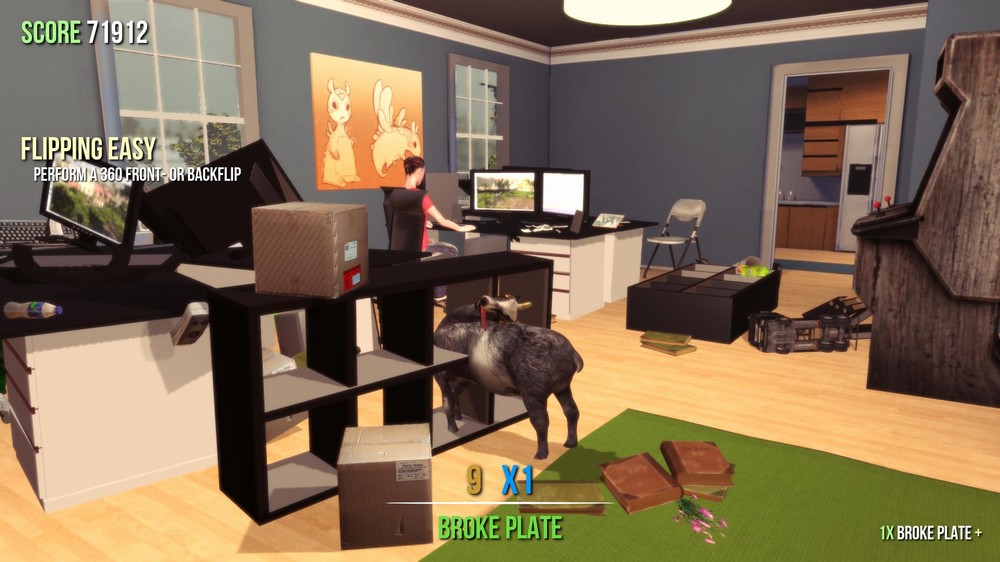 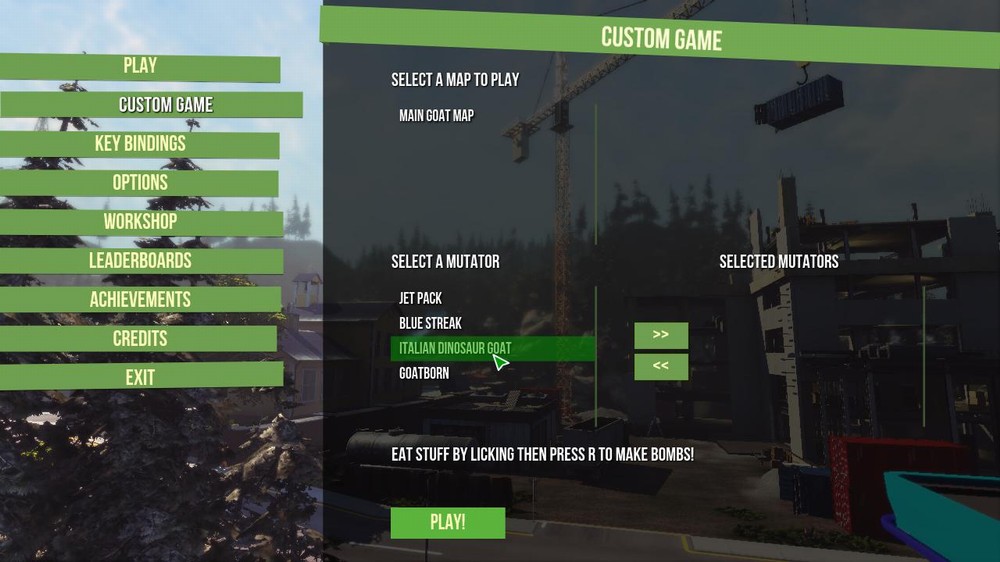 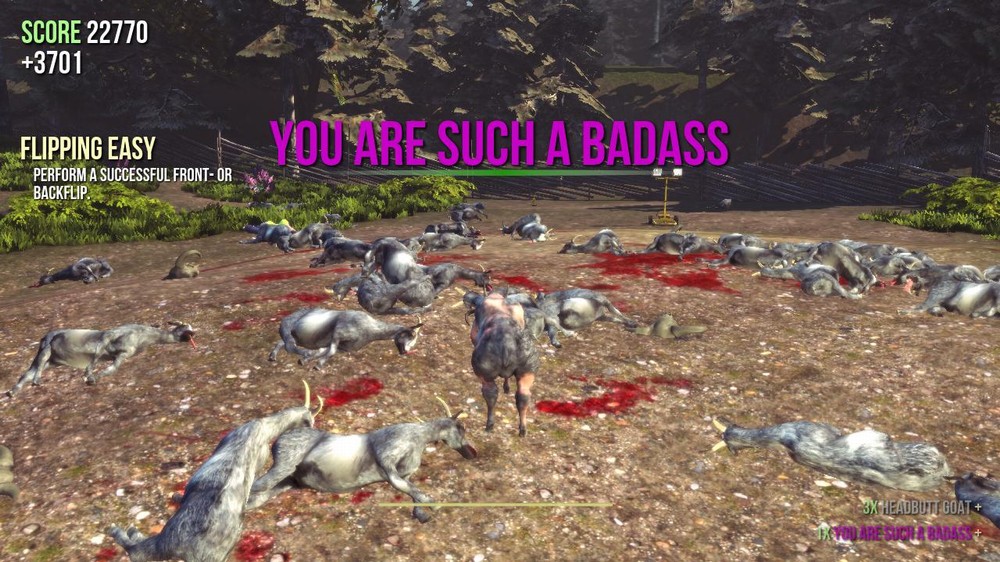 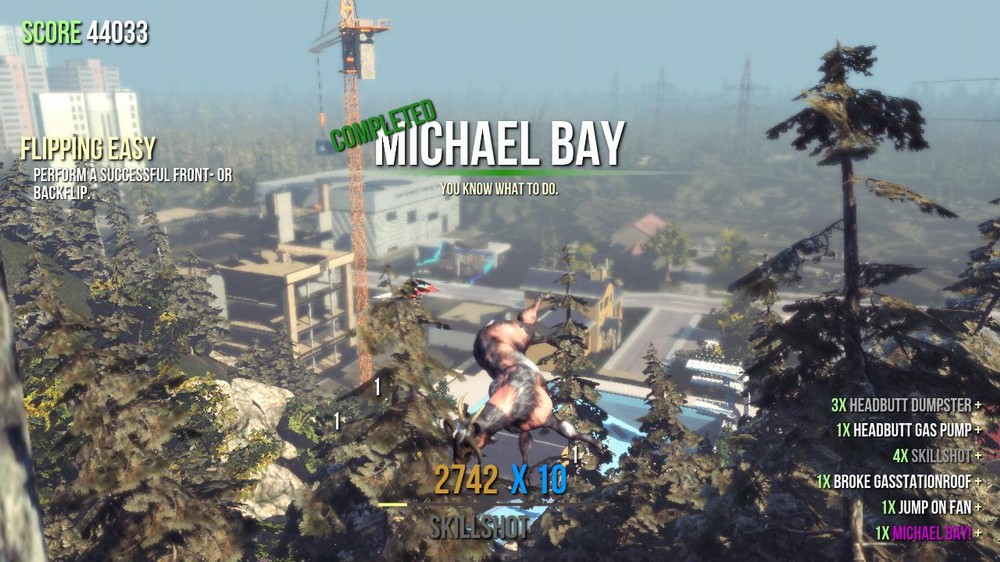 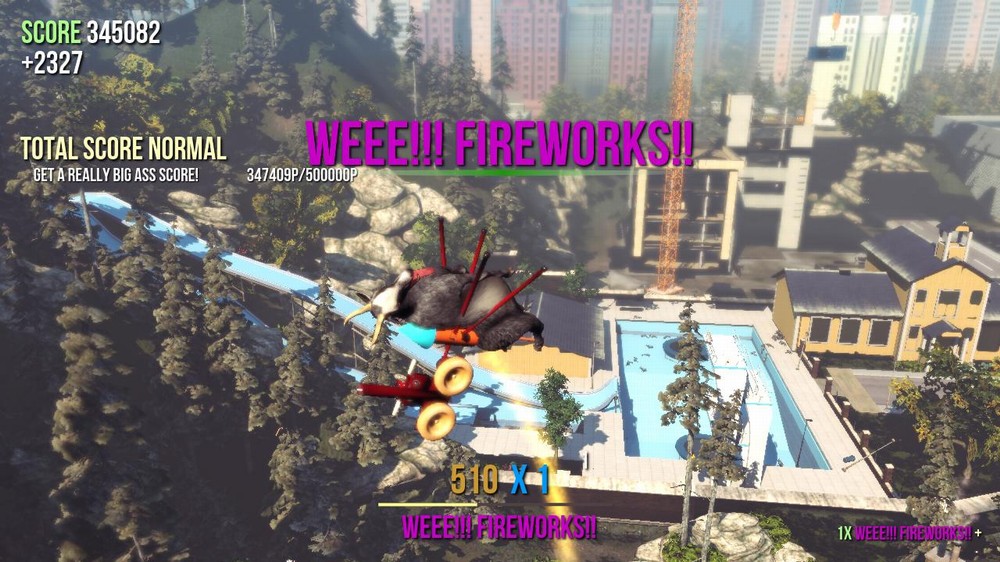 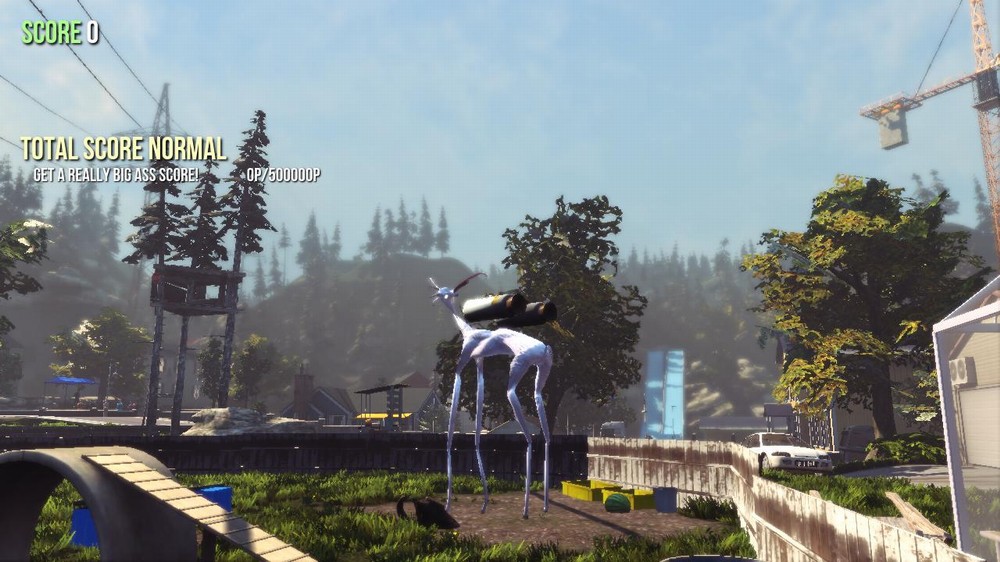 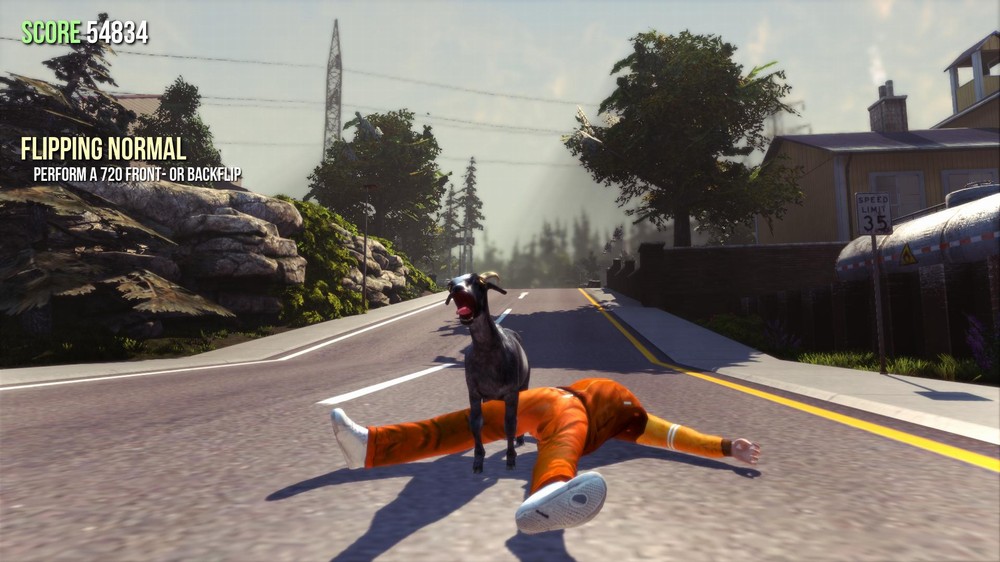