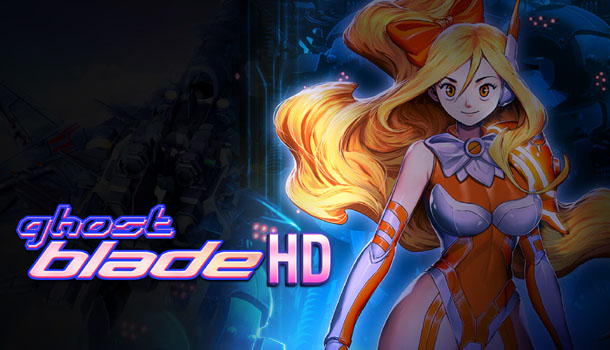 + Old school chaotic gameplay
+ New school graphics
+ Turn the screen on the side!

Maybe a little too chaotic.
Not quite sure what to do, or why?
Finished in under 20 minutes.

The “Shoot ‘Em Up” genre (sometimes referred to as “Shmups” or “STGs”) has been a staple in video gaming since the very early days of the arcade era. Space Invaders, Galaxian, and Galaga are classic examples of this popular genre. Over the years, developers have made minor modifications to the gameplay, but really the overall formula has not changed much over nearly forty years. Sure, there have been some real standouts in the genre – games like Einhander and Ikaruga come to mind – but unless the game has a really unique hook, it really has a hard time standing out in the crowd. That being said, Ghost Blade HD on the PS4 is about as basic an any shoot ‘em up can get.

I would like to start by stating clearly; I enjoy Ghost Blade. Its gameplay rekindled the nostalgic giddiness I felt as a kid hanging out in the arcades in early the 1980’s, and delivered the same visceral excitement I experienced with my early runs at Galaxian and Galaga. However, as with those classic arcade cabinets, Ghost Blade does not do much in terms of explaining any backstory, purpose, goals, or even gameplay – this may have been par for the course thirty-five years ago when we were chunking quarters into a box, but in 2017 we expect a little more meat and potatoes in our gaming, and that’s where Ghost Blade falters. 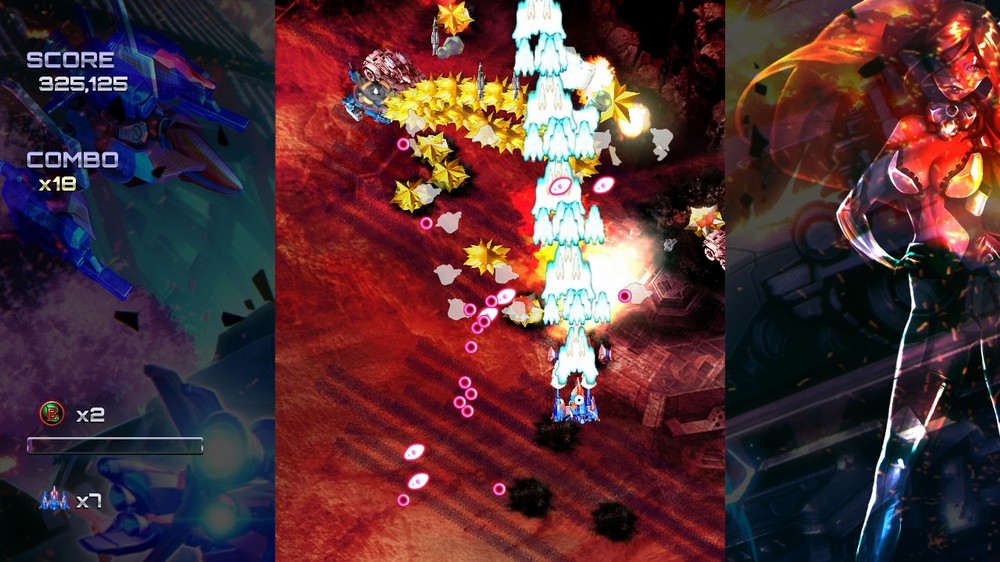 Ghost Blade fits under the sub-genre folks like to call “Bullet Hell” Shoot ‘em Ups. These Bullet Hell games are just as they sound – the screen is literally filled with waves of enemy bullets, tasking gamers with not only eliminating enemies as quickly as possible, but also with navigating through the increasingly complex rain of enemy gunfire. While several classic Shmups have incorporated unique gameplay elements to capitalize on this – for instance Ikaruga’s color-absorbing gameplay – there’s not a lot of options or explanation of how to survive in Ghost Blade.

There are bombs, which will eliminate incoming projectiles with their blast radius, and there is “Focus” fire which will take all the ship’s energy and focus it on a single beam pinpointing enemies (think headshot) a one-shot kill with a power-up. But otherwise, there is a good degree of ambiguity as to which on-screen projectiles are destructive, which are beneficial, and to what degree – if any. The result is still mostly enjoyable, but frustration and confusion mars the experience more often than it should. 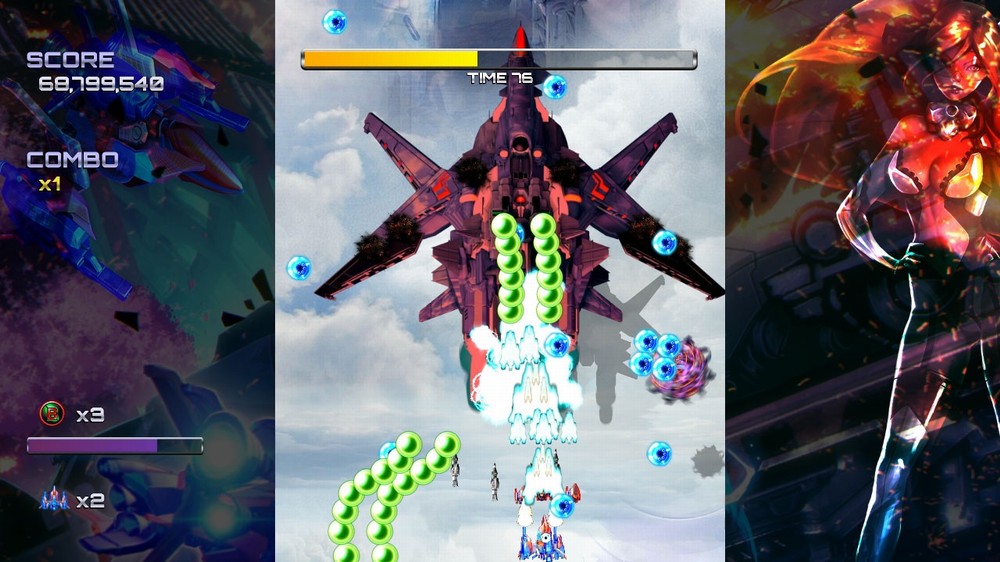 For better or worse, the gameplay is very brief – and by brief, I mean that the five stages of gameplay can be completed in a little less than 20 minutes on normal difficulty. This is partially aided by the fact that the game features instant respawns and goes has no hesitation between stages. Still, I was a bit surprised that on normal difficulty I was able to finish the game on my very first attempt with absolutely no knowledge the controls or gameplay mechanics.

The game features a choice of three ships with which to play, and difficulty can be toggled between Easy (with auto-bomb), Normal, and Hard. There is a practice mode which skips gamers right to the boss battles to get familiar with their patterns, strengths, and weaknesses without having to slog through the standard stages. The game also features local 2-Player Co-Op play, just in case there wasn’t enough chaos filling the screen. 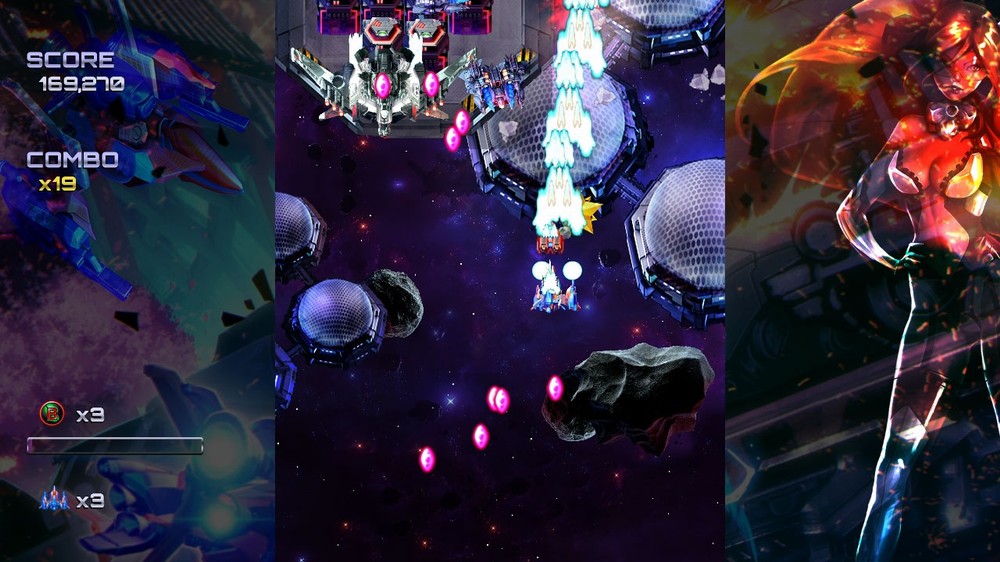 One nice feature we see every now and then with these arcade-styled titles with their is the ability to rotate the screen 90° to emulate an arcade cabinet aspect ratio (portrait) and fill the screen without side bars. Of course, this requires the gamer to also physically rotate their widescreen television/monitor 90°, which may or may not be feasible (kids, do not do this at home) but it is a cool idea. 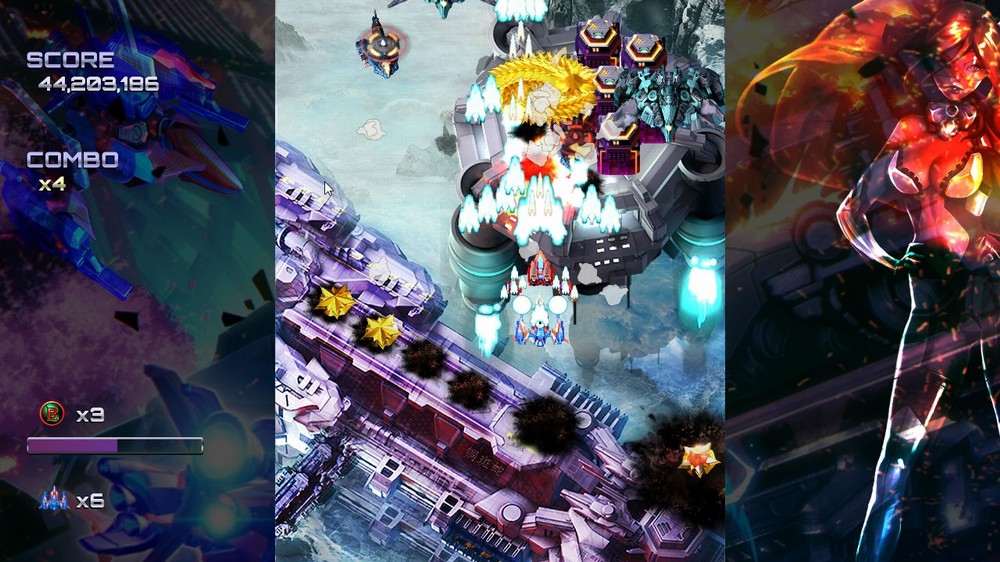 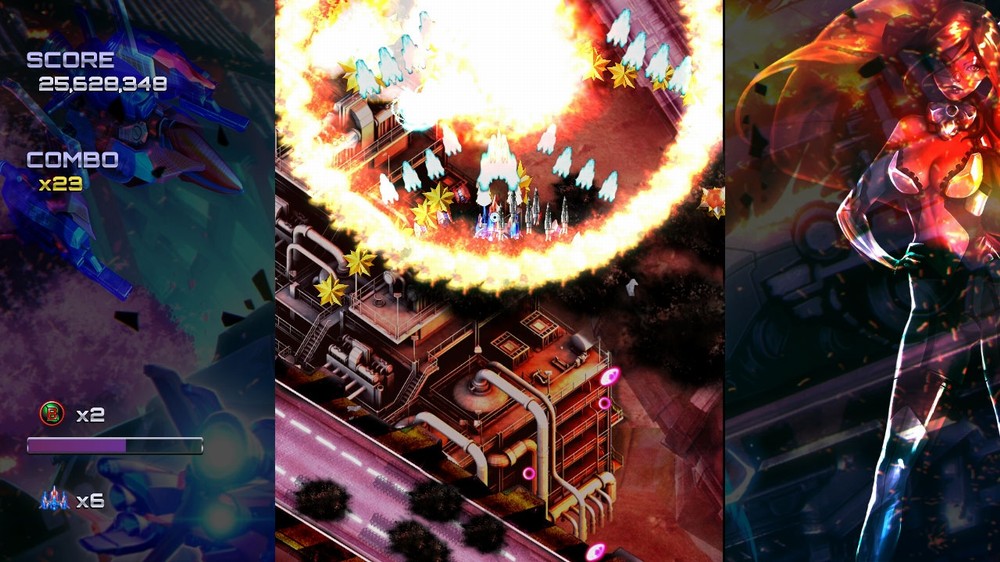 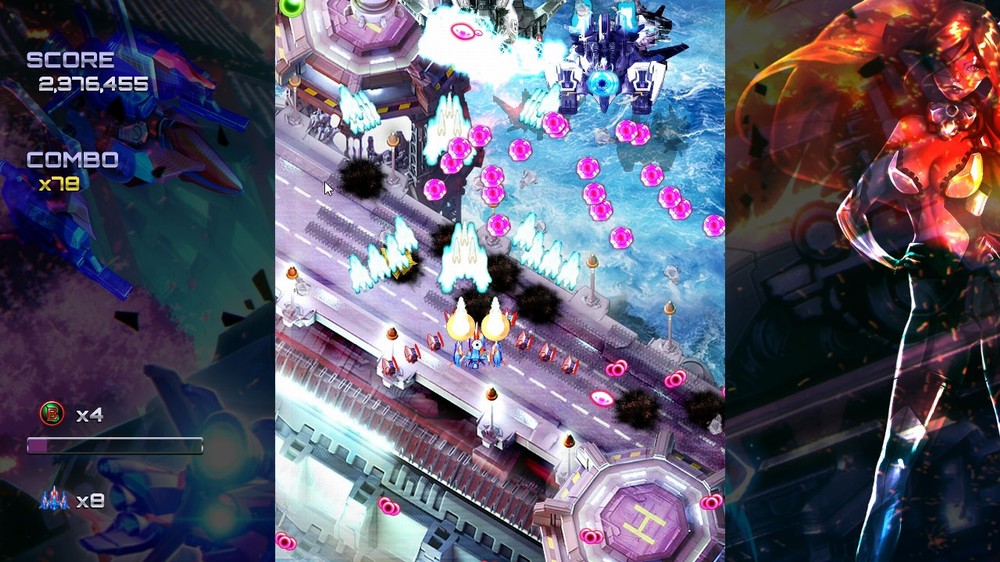 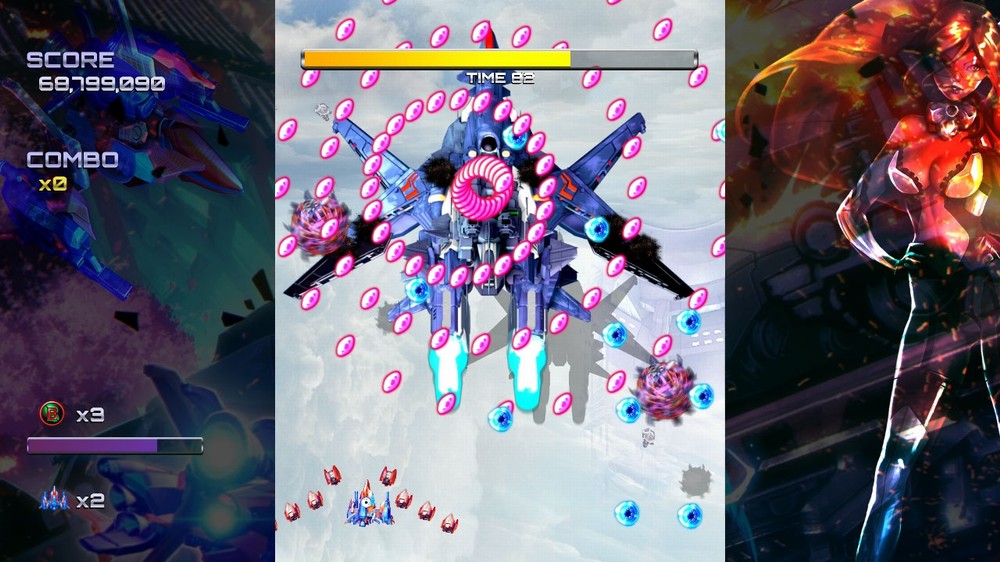 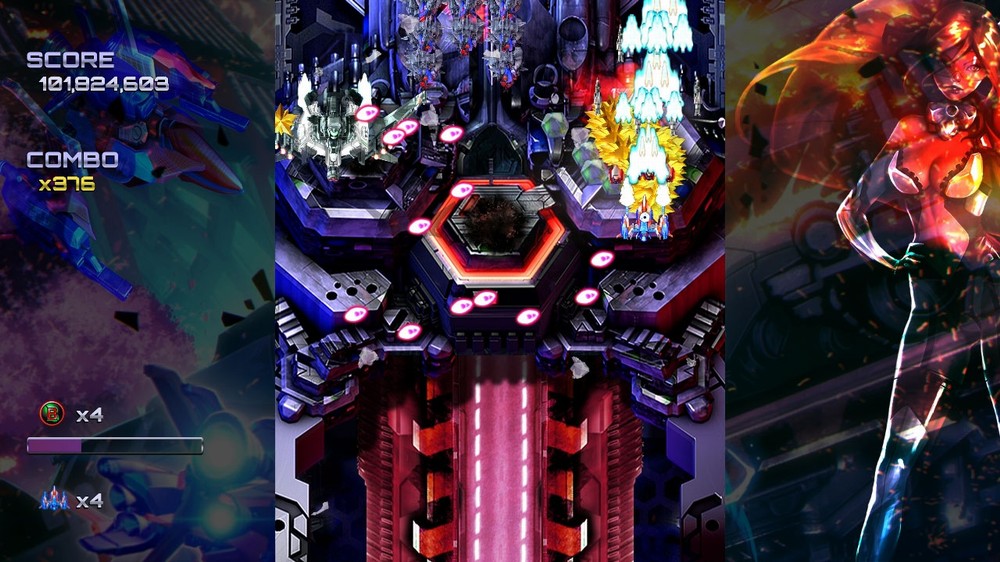