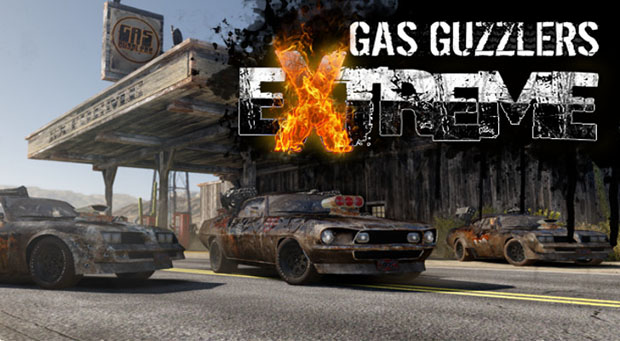 Gas Guzzlers Extreme is a total blast for the solo gamer.

It’s been about three years since I first played Gas Guzzlers Extreme on the PC. At the time it was a fun guilty pleasure of a car combat racing game that mixed the best parts of Mario Kart, Twisted Metal, FlatOut, and all the carnage of Mad Max and the Death Race movies.   Now the game has finally made its way to the Xbox One, and while the console port does strip out the multiplayer elements, the single player mode is fully loaded with content including; 12 game modes, 42 tracks, 12 arenas, 8 different environments, 21 customizable and upgradable cars with 12 unique weapon types and 22 types of zombies just waiting to become hood ornaments.

You’ll race on snow and ice and even in rain soaked conditions that will affect your visibility and handling. The game pulls the old bait and switch by throwing you into that first race with an awesome car fully decked out with weapons, then once you’ve had the taste of the “good life” they start your new career with a few thousand dollars and a measly selection of things to buy in the shop. It’s quite the reality check when your first real race takes place in something not much better than a golf cart armed with a slingshot. 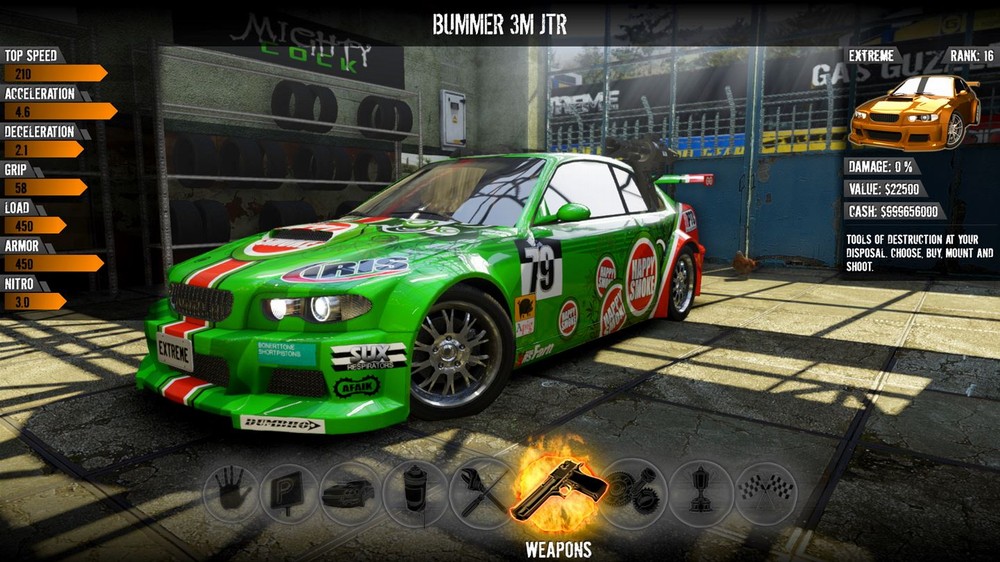 The one thing I really enjoyed about the career mode is the freedom to advance by playing the events you like. Your only objective is to rise through the leaderboards by placing in the top three positions to earn points, but rather than having a structured sequence of events the game simply offers you a selection of events, each on their own track. You can pick between a standard no-weapons Power Race, although you can still use defensive weapons like mines, smoke and oil slicks, or you can choose a Battle Race that makes use of any installed weapons you have on your car. There is also the Knockout Race which is a 7-lap battle race but the person in last place at the end of each lap explodes, leaving their fiery hull on the track as a new obstacle to avoid.

From time to time sponsored events will be offered. These are usually arena-style events and include deathmatch, CTF, and last man standing. I’m a huge capture the flag fan, and Gas Guzzlers Extreme does this mode so well in that there is no home base for the flag. Essentially you must be in possession of one flag and drive through the other flag wherever it was last dropped – essentially you need to capture BOTH flags to earn the point. This totally eliminates people camping on flag bases, and keeps the game very mobile since the flags are always on the move. 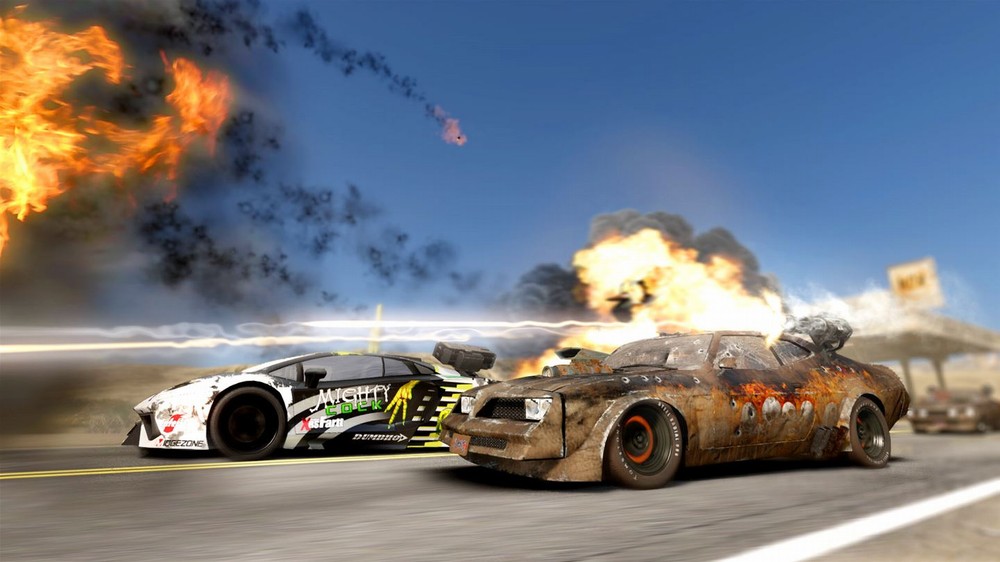 There is a great sense of progression as you make your way through the career. You’ll be earning cash for winning races and completing bonus challenges for each race such as keeping a certain driver from placing or finishing, or killing three cars with mines or using oil eight times, etc. You can then spend your money upgrading various elements of your car like engine, nitro, brakes, armor, and weapons. There are a dozen weapons that include shotguns, rocket launchers, and machine guns, some of which can be fired behind you as well as forward. The beauty of the system is that if you aren’t racing Battle Races you can put your money into the car, but if you’d rather fight it out in multi-lap combat then start upgrading those guns and armor plating. You’ll also have to pay to repair any car damage between races or risk going into the next race with a damaged car and hope for a repair icon early on.

While the graphics were (still are actually) stunning on the PC the Xbox sacrifices considerable sharpness in order to maintain a playable framerate.   There is loads of shimmering and aliasing issues and the whole game just looks fuzzy in comparison, not just to its PC cousin, but any other recent racing game like Forza, Need for Speed, or even The Crew. Thankfully, once the light turns green and you hit the gas most of these issues dissolve into some blinding racing action and motion blur to hide the deficits.   The only gameplay issue would be that it’s hard to identify upcoming power-ups when you need to choose among multiple drops. 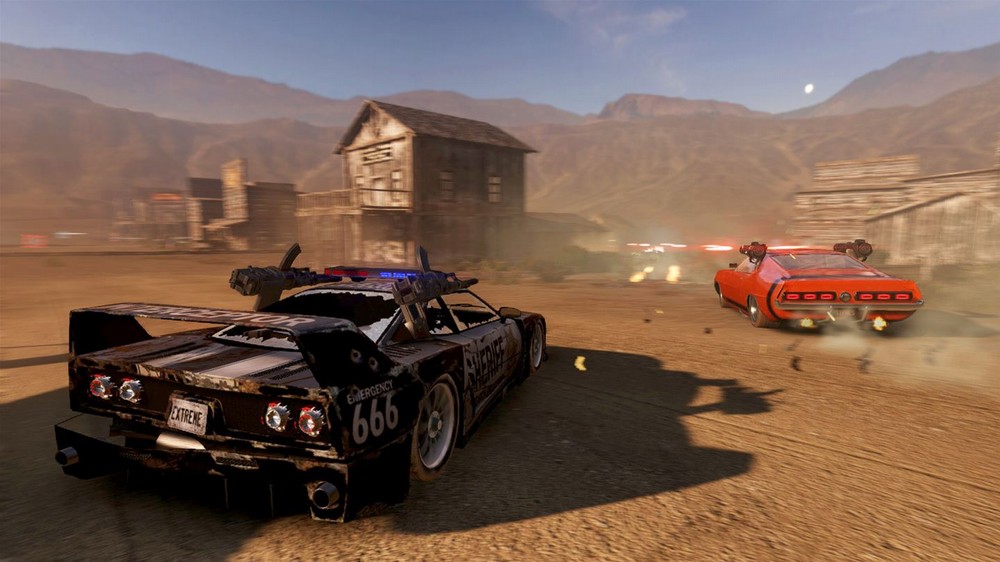 Clarity issues aside, the various location themes are gorgeous and there is some good lighting and shadows, lens flares, fire, smoke, and real-time car damage. The tracks are massive with multiple paths; some not even obvious as there are no invisible walls or penalties for cutting corners or heading across the desert. You might even find a health or nitro pick-up hiding behind a cactus. The tracks are littered with collectibles including gold (cash) bonuses, repair kits, oil barrels, nitrous tanks, and smoke canisters as well as ammo and the 2x damage skull and crossbones. The AI is effectively brutal in not only darting ahead of you and stealing your pick-up, but then turning around and using them on you. I was surprised that the game defaulted to easy, so I of course kicked it up to normal difficulty and found it a major feat to come in second or third, let alone actually win a race. Things do get easier as you learn the tracks, find the shortcuts, and boost the various elements of your car, but the AI is surprisingly competent with no rubberbanding.

The sound effects are explosive, and I love the fact they got the announcer guy from Death Race to do all the in-game commentary. Even the 3-2-1 countdown gives me chills. There are lots of one-liners delivered by your driver that pay comical homage to Duke Nukem/Serious Sam. The menu music is this odd assortment of twangy country themes that you might have heard in a café on Route 66 back in the 50’s and 60’s yet somehow fits the theme of the game. There is also a lot of subtle humor thrown into the presentation, mostly visual, like the various names of the AI racers, some of the between-race text boxes, and some of the sponsors like Mighty Cock and Happy Smokes; the latter puts a giant pot leaf on the hood of your car. You’ll be offered various sponsorships throughout your career, and these not only change the appearance of your car but also increase your winnings.

Gas Guzzlers Extreme is $25, the same price as the PC version on Steam and that version includes the multiplayer, so I would have thought this slightly stripped down and visually inferior version would be a better bargain at $20.   Regardless, if you are tired of the more conventional racing games out there then this game is definitely for you. Gas Guzzlers Extreme is a total blast with a progressive difficulty that continually challenges you, and despite the lack of multiplayer, I’d still rank this right up there with my other favorite car combat game, Twisted Metal, when it comes to overall enjoyment and longevity. Definitely worth checking out now or even better, when it goes on sale. 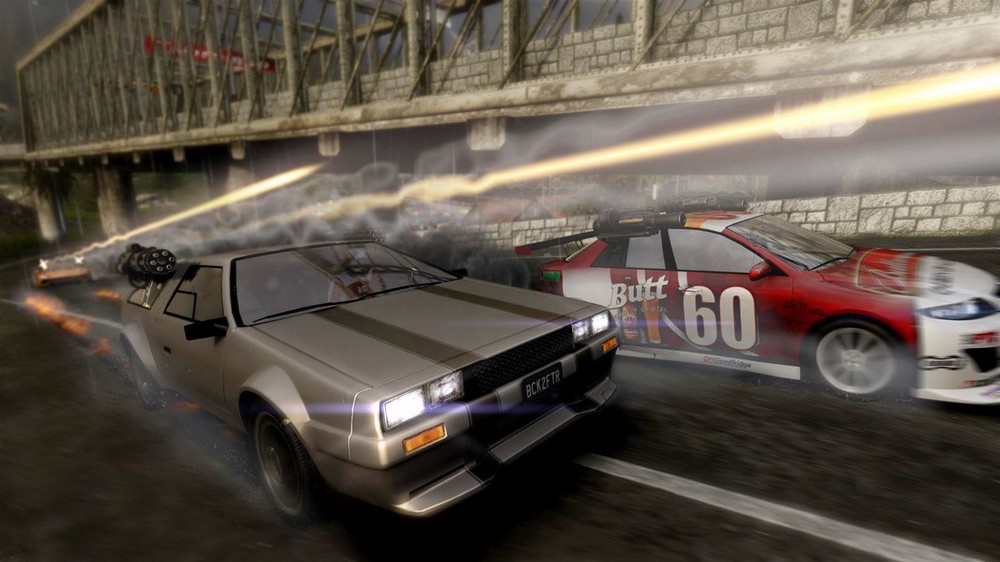 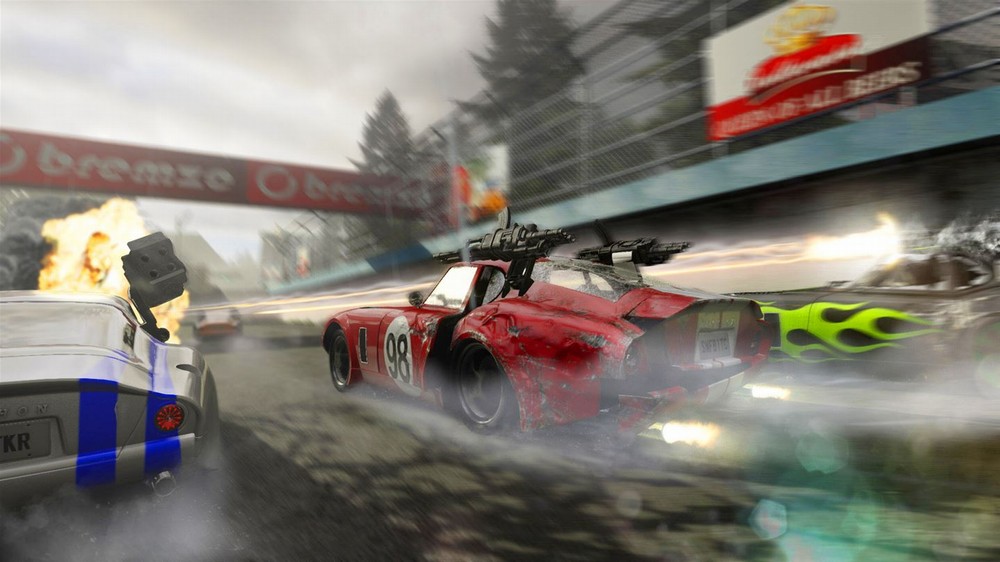 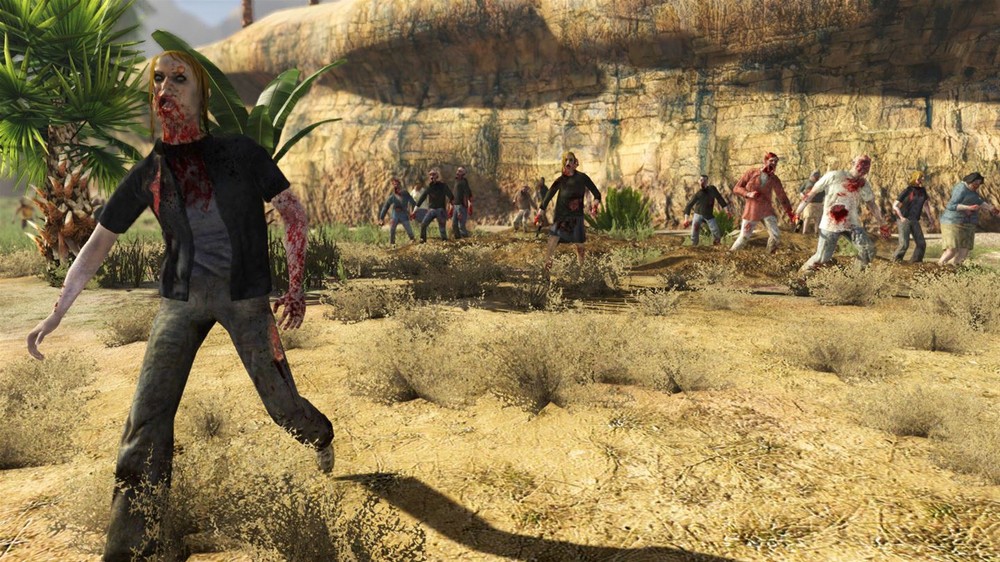 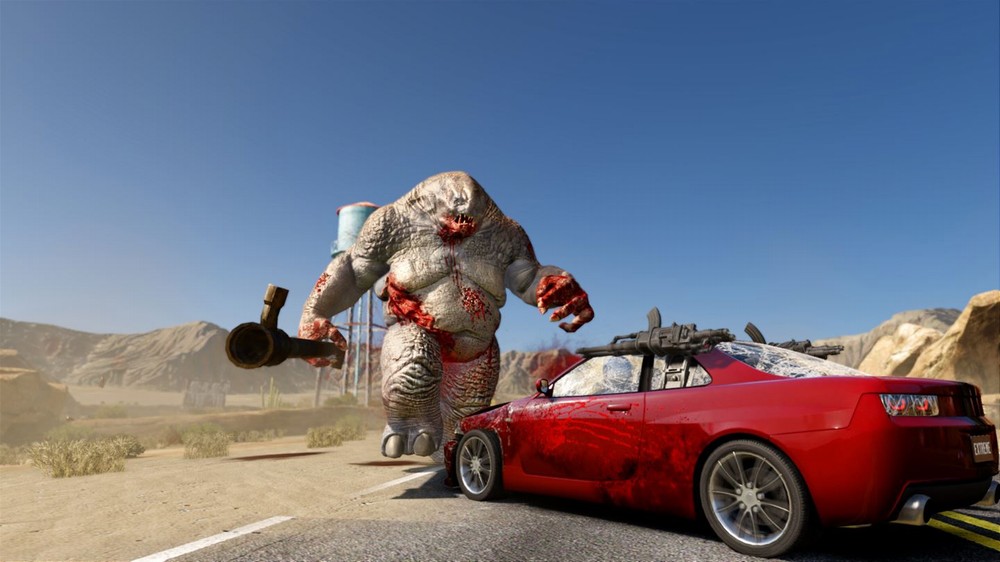 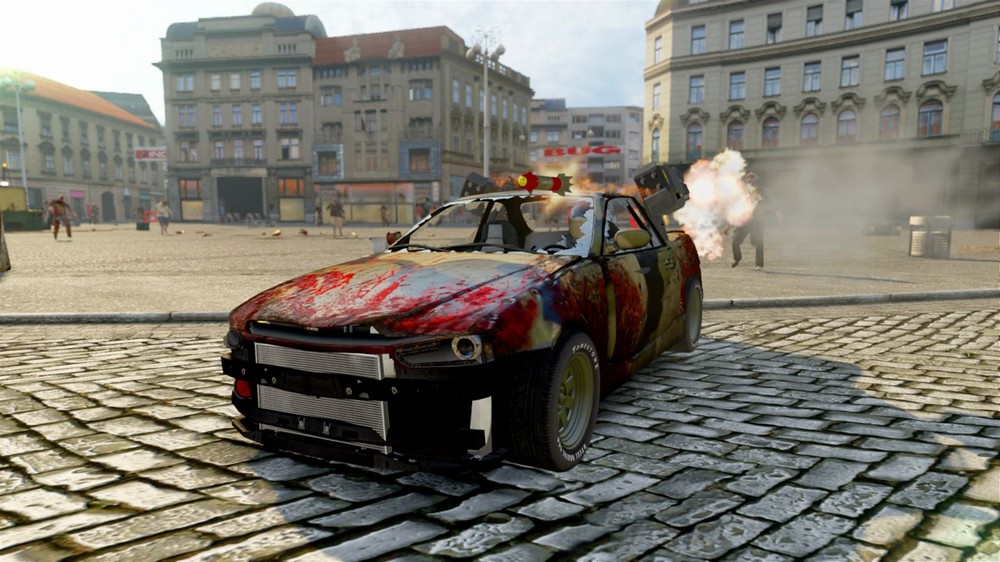