A frantic and fun FPS-MMO hybrid that won't empty your wallet.

I must say that I’m liking the modern trend of taking the MMO out of the realm of elves and wizards and into science fiction. I’ll always going to love the games that pioneered the genre though I’ve found new endeavors like the newly released Firefall from developer Red 5 Studios to be a breath of fresh air. Firefall is one of very, very few MMOs that incorporates First-Person Shooter gameplay with deep Role Playing Game dynamics. What’s best of all is that it’s a free-to play MMO that doesn’t succumb to the “pay-to-win” formula that I’ve never been a fan of.

Firefall takes place during the end of the 22nd century after a massive asteroid smashed into Earth leaving a scarred planet that left the human race in near ruin. The discovery of a new element, Crystite, deposited around the world caused conflict among the survivors as this new element’s energy is more powerful and efficient than nuclear power. After no clear victor, nations joined in cooperation to advance science and industry far beyond anything seen before. What soon brought great triumph also brought great horror as the great technology, Arcfolding, brought a sentient energy storm in the wake of a powerful ship known as the Arclight.

The damaged ship returned and crashed into South America, while the storm shrouded Earth and twisted the landscapes and life forms into visions of another world. Among them are the Chosen, a humanoid army hell-bent on making sure the Melding succeeds in taking over the rest of the work untouched by the storm. This is where you come in. As a member of the ARES (Assault, Reconnaissance, and Extraction Specialists) Initiative you are a well-trained mercenary empowered by the Accord to use armored exo-suits known as battleframes to combat the Chosen as a last ditch effort to stop the world from bringing the end of the human race. Really no pressure or anything here… 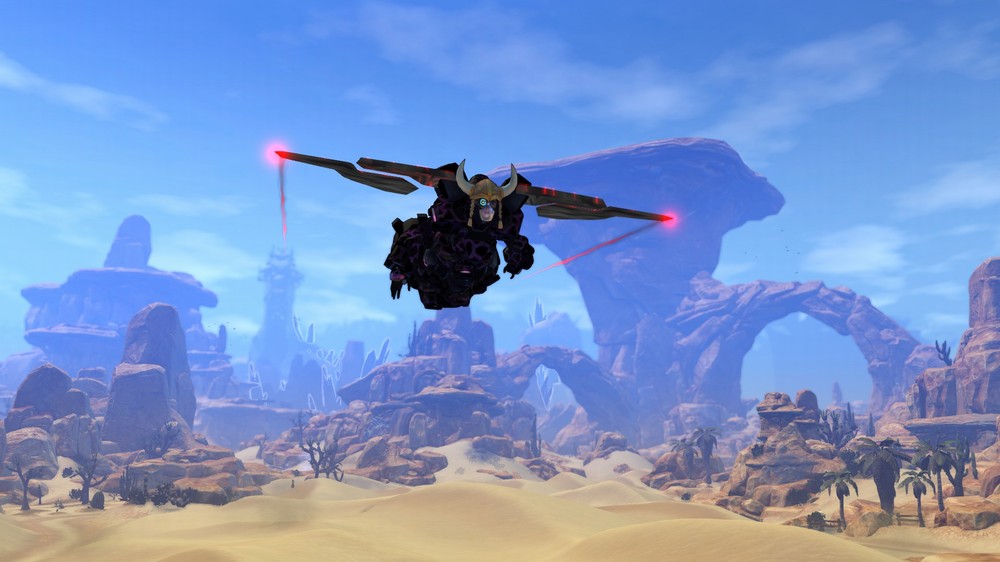 Firefall, named after the games’ asteroid event, is unique in the fact that while still containing science fiction elements it depends on only human based characters. A player’s role in combat is not defined by a race but by the battleframes that they choose to use. After a bit of character creation, players will choose from one of the 5 basic frames of class archetypes. Some may choose the “bullet-sponge” worthy Dreadnaught class to take some heat and delivery it right back. Others may enjoy the classic soldier package that only the Assault class can deliver. If you’re a player that prefers a support role then either the medic heavy Biotech class or the defense kings of the Engineer class. The fifth and my personal favorite, Recon, allows players to initially act as a support class using SIN Beacons to light up enemy targets while being able to drop foes with medium range sniper fire while masking their own location from enemies.

One of the biggest things that I noticed almost right from the start is that your character itself doesn’t level up. Instead it is your battleframe that increases in level when you acquire enough experience through completing objectives and events as well as enemy defeats. This does several things to the dynamic of the game. First off there is no need for a player to log out just to switch to another battleframe if they have one. Progressing to more advanced battleframes requires the player to either reach the max frame level of 40 and spend the earned Pilot Points on a new battleframe or spend real money converted into Red Beans to purchase a desired battleframe right away. As Firefall does contain a micro transaction system, there are ways to buy cosmetic items as well a way to quicken their adventure though the game can be played completely without paying a penny though for those who like to do things the good old-fashioned way. Once a player earns other battleframes they can switch back and forth whenever they want via the many Battleframe Stations throughout the world. 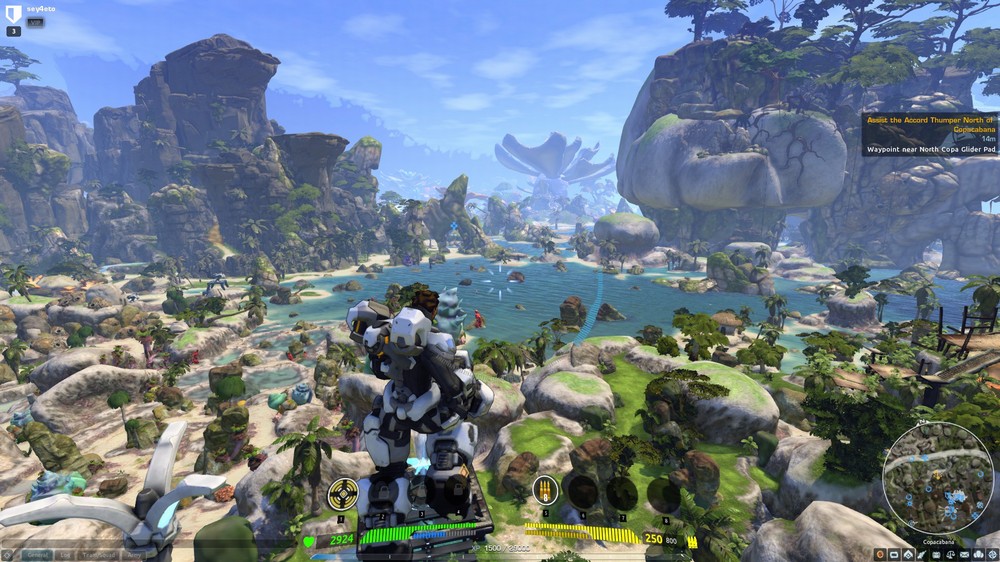 The biggest potential downside to getting new battleframes is that you have to treat them as if you were creating a new alt character in any other MMO. This means you will spend a lot of time playing the same missions over with every new frame to build up its levels so you don’t get trounced in a high level area like a starving dog destroying a steak. To be quite honest though after I made it past the first set of so-so training missions, I really started to enjoy Firefall’s story and its inhabitants. The only snag that I encountered as far as missions went, which kind of took me out of the immersion, is that I often got stonewalled by the “loading new objective” message during missions sometimes making me restart the entire mission over again.

One of the biggest appeals that Firefall had on me going in was that combat is first and foremost that of a First Person Shooter not unlike games like Borderlands, or the upcoming Destiny. One of my favorite elements in the game comes in the form of jetpacks which reminds me more of games like Tribes 2 where jet packs gave players all kinds of tactical options in the heat of battle. For me, this allowed my inquisitive and explorative nature a chance to scale large vertical locations and put my sniper rifle to good use with little opposition either on my own missions or aiding other players in their endeavors from afar with my Nighthawk battleframe. Of course this made me notice a glaring problem with the enemy AI at times. I could almost always count on enemies practically lining up to be dropped by my shots when I was vertically positioned above them.

Speaking of dropping enemies, Firefall’s combat like most FPS titles is ultimately skilled based. There is no enemy targeting here, as you must actually aim at your targets to hit them. So if you suck at first person shooters then, Firefall is not going to be your cup of tea. As a fan of FPS titles on PC, I quickly felt comfortable with the default keyboard and mouse control scheme. While I find Firefall’s traditional control methods quite satisfactory there is support for a controller or gamepad. Though after attempting to play with a controller to give it a try, I had to go back even after reconfiguring the controls as some inputs remained centric to the keyboard and became too troublesome in the long run. 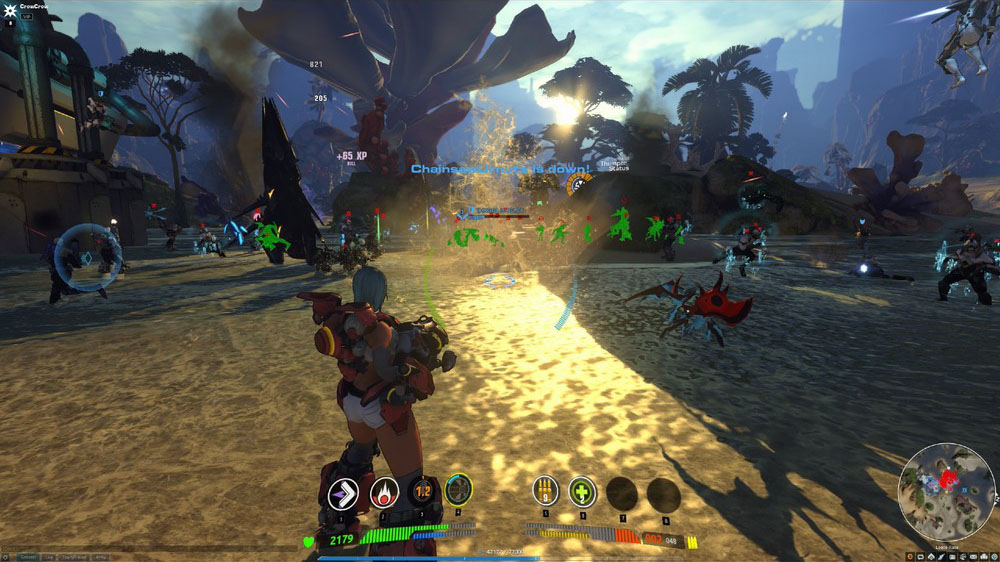 Firefall offers players ample opportunity to lay down the hurt in their own way as you make your way through a slew of quests, instances and more importantly player triggered dynamic events. Crystite may be the main resource and currency of the game but other minerals are needed if players want to take advantage of Firefall’s research and crafting system. The main way to do this is to use your own personal Thumper to mine for resources. While this is a great way to gather resources it has the unfortunate side effect of alerting every creature in the vicinity to attack you. This is where other players can join in and help keep the critters at bay while you thump or where you can join in on other thumps to secure your own little slice of the action practically anywhere at any time. I often found myself almost always joining in on these dynamic events whenever I came across them as it was often a rush. There are also dynamic events like Melding Tornadoes that will show up from time to time as well as Chosen attacks that can catch you off guard, but that is half the fun of Firefall.

All of Firefall’s gunfights and RPG tidings take place in one of the more interesting visual offerings that I’ve seen in several years. While it’s not the first MMO Shooter to take place on Earth as opposed to some uncharted world or fantasy realm it certainly takes place in visually pleasing locales. Most of the game takes place around the fictionalized coastal city of Copacabana and a few other unaffected locations which is welcome change from the normal fair that I’ve seen in a lot of MMOs. The environments for the most part are quite pretty even in their altered state. The enemy factions and hostile creatures that inhabit the world are also nicely designed to fit the world though I can’t quite say the same for the player avatars. While Firefall does feature character customization I feel that the options are quite limited at this point and the models are kind of bland despite their cel-shaded appearances. 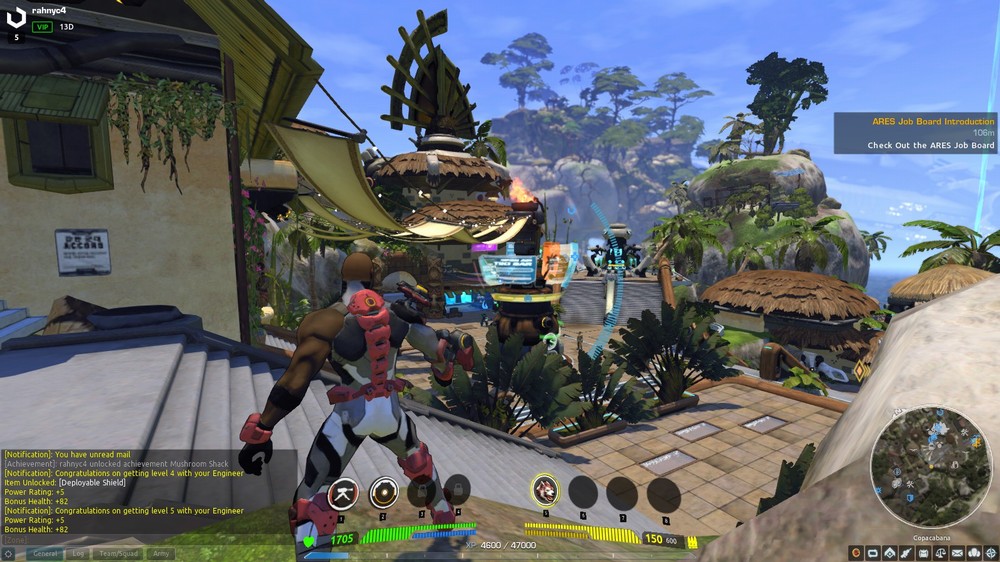 While it lacks so visual polish, Firefall makes up for some of it with some decent voice acting on the missions especially when it comes with your handler, Aero. The voice actor breathes life into the character making her enjoyable to listen to in missions. Sound effects found within Firefall vary from being quite good like in the case of creature noises to being rather lacking in the case of weapons fire. Sure the weapons sounded okay but I didn’t feel like they had the “oomph” that they really needed. Firefall however does features a rather enjoyable soundtrack featuring several majestic pieces as well as pieces that make you want to get right into the fight.

While Firefall is free-to-play I wouldn’t be giving it a proper review if I didn’t mention both the Digital Starter Pack ($29.99) and the Digital Deluxe Edition ($99.99) available to purchase to give you a bunch of in-game content as well as some extra out of game content. Both versions come with the Cobalt Phoenix Warpaint for your Battleframes as well as a varying amount of VIP Time and Red Beans to give you a leg up. They both also include a downloadable concept art book as well as the Firefall Soundtrack. The biggest difference is that the Digital Deluxe Edition gives you complete access to all 11 Advance Battleframes right from the beginning and the monster Ranger All-Terrain Vehicle so you can be the envy of all your friends. The hardest part will be deciding which to try out first.

During my time with Firefall, I found that I quite enjoyed the often time frantic FPS gunplay mixed with the online social environment of an MMO. Firefall has some apparent faults, but somehow still manages to be a fun and engaging free-to-play experience that doesn’t force you into paying real money to enjoy it. It will be interesting to see what new content that the folks at Red 5 Studios will bring to the game in the future, but as it stands Firefall is definitely worth giving a try. 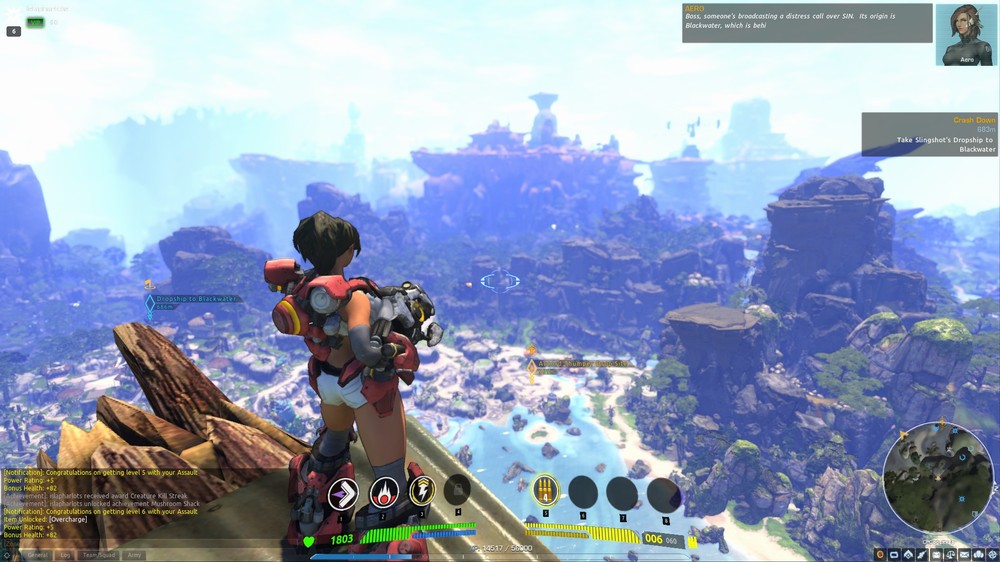 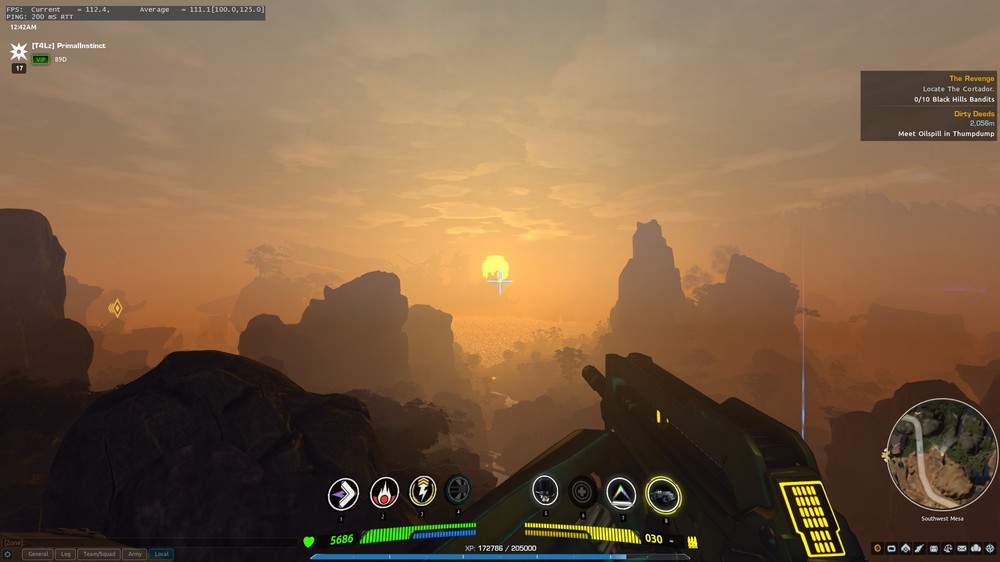 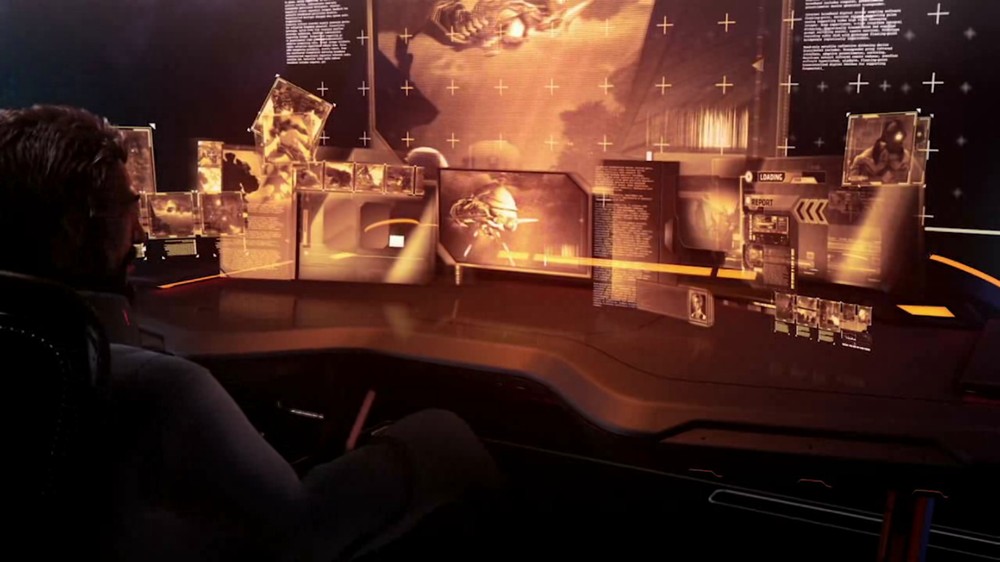 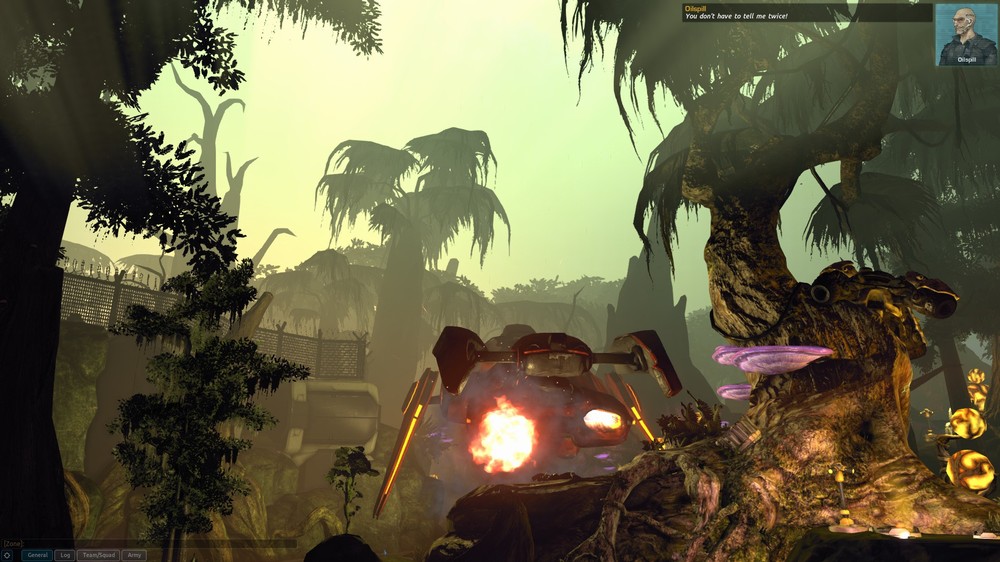 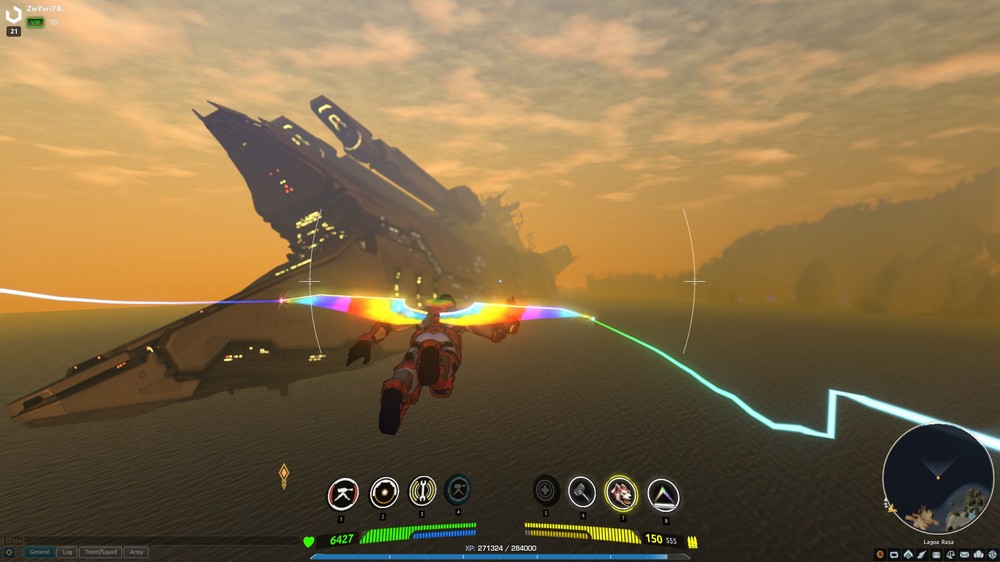 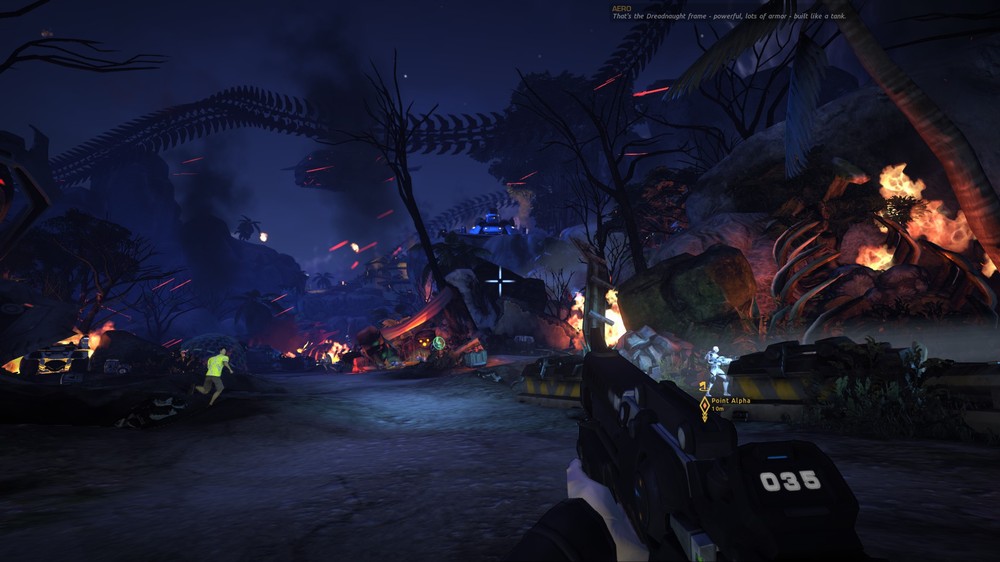 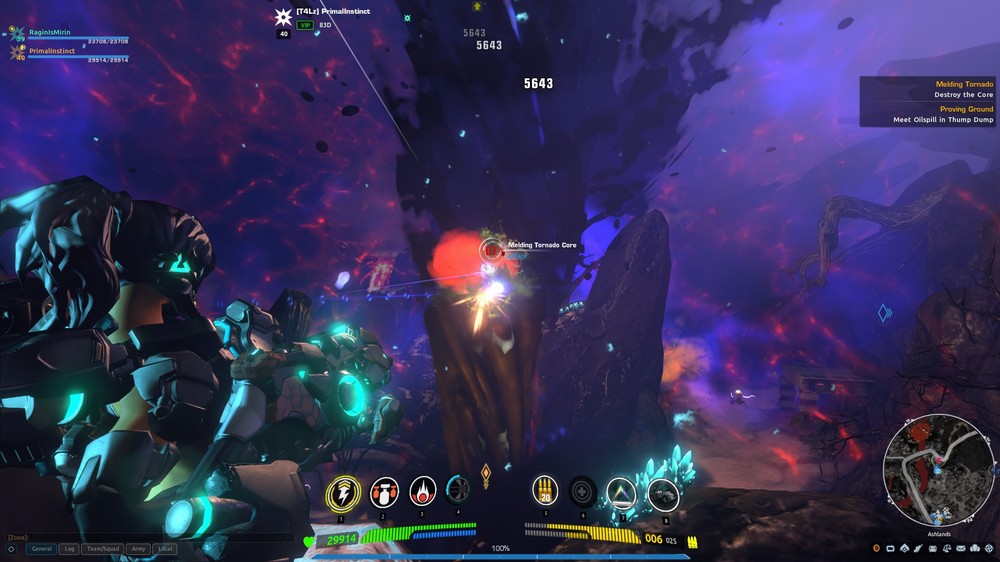 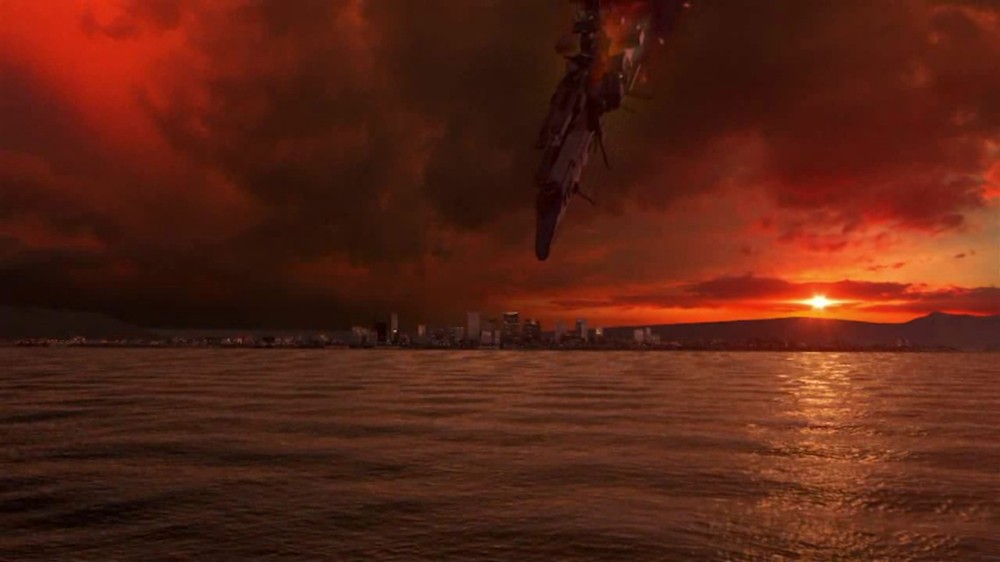 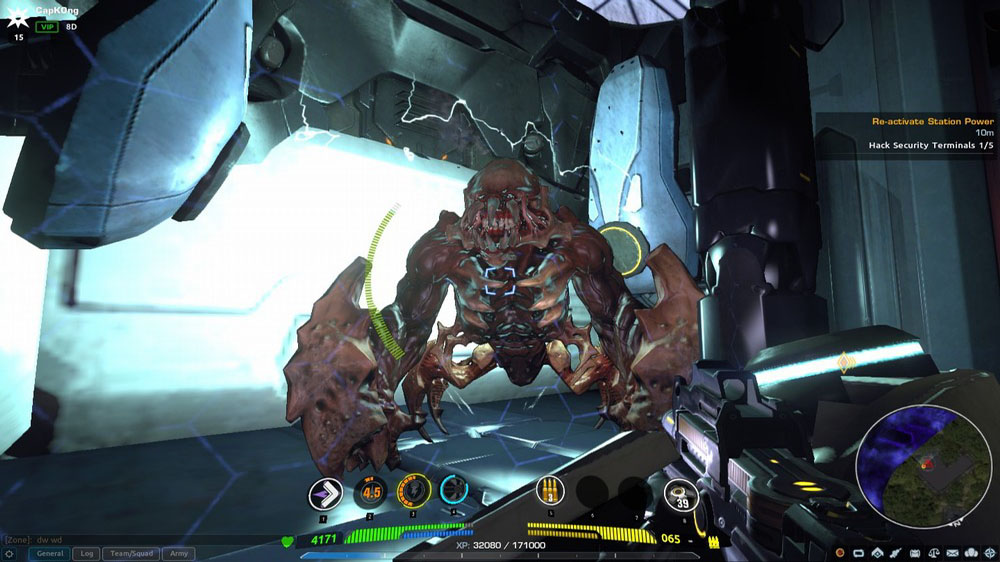 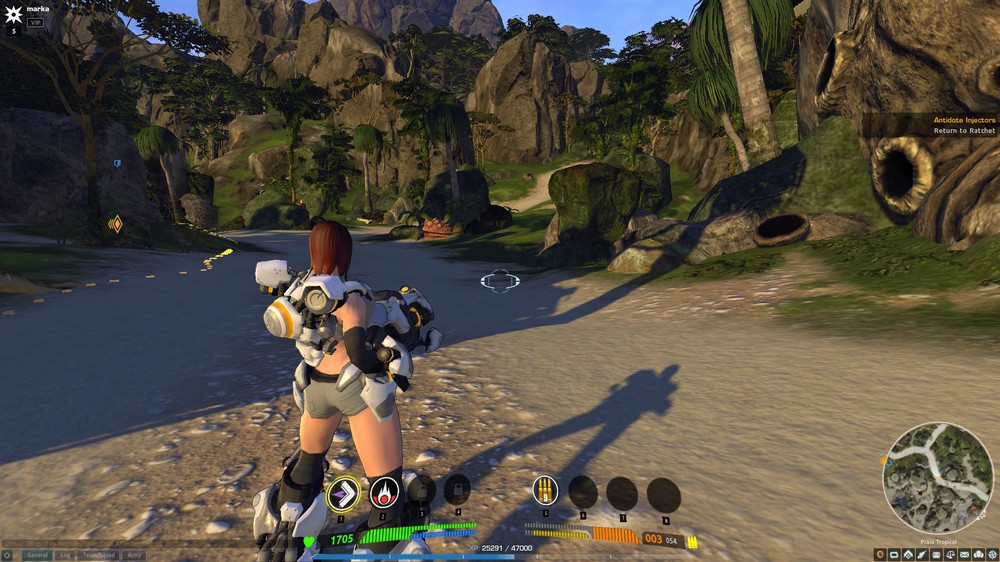 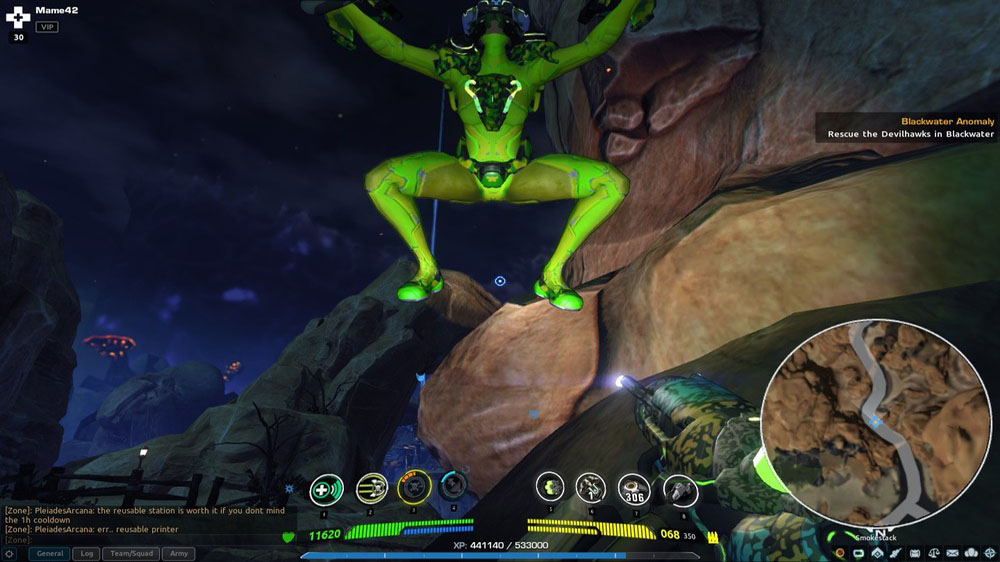 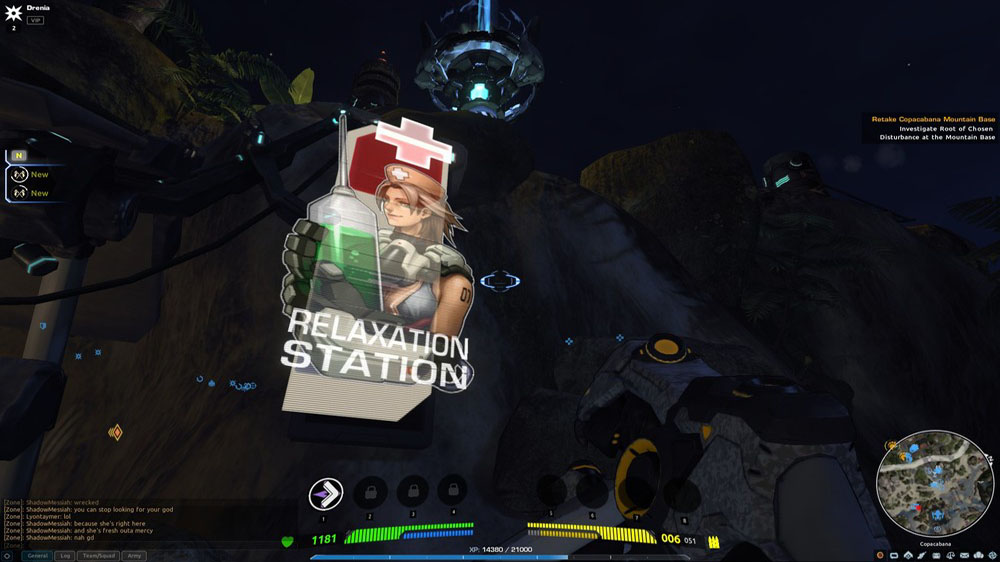 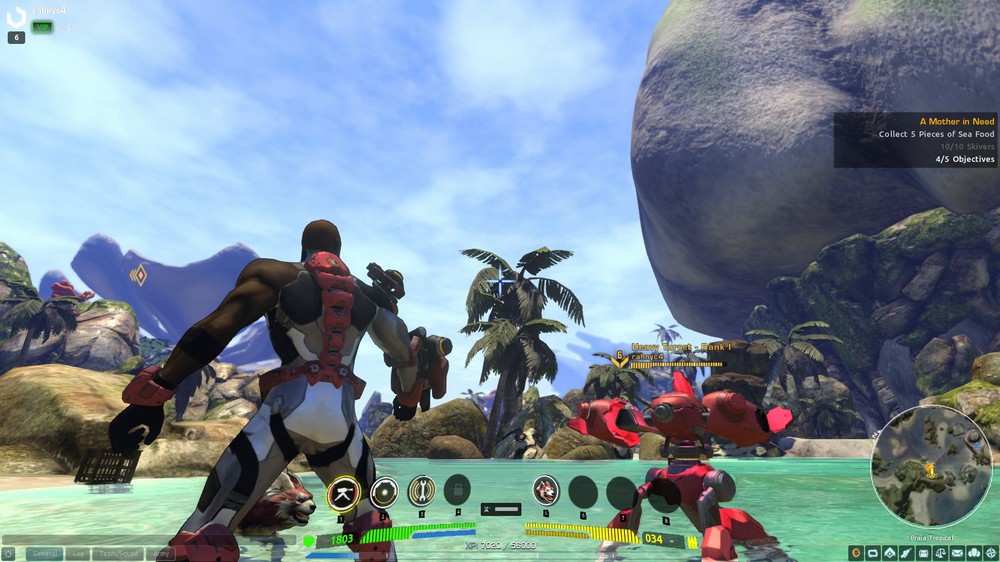 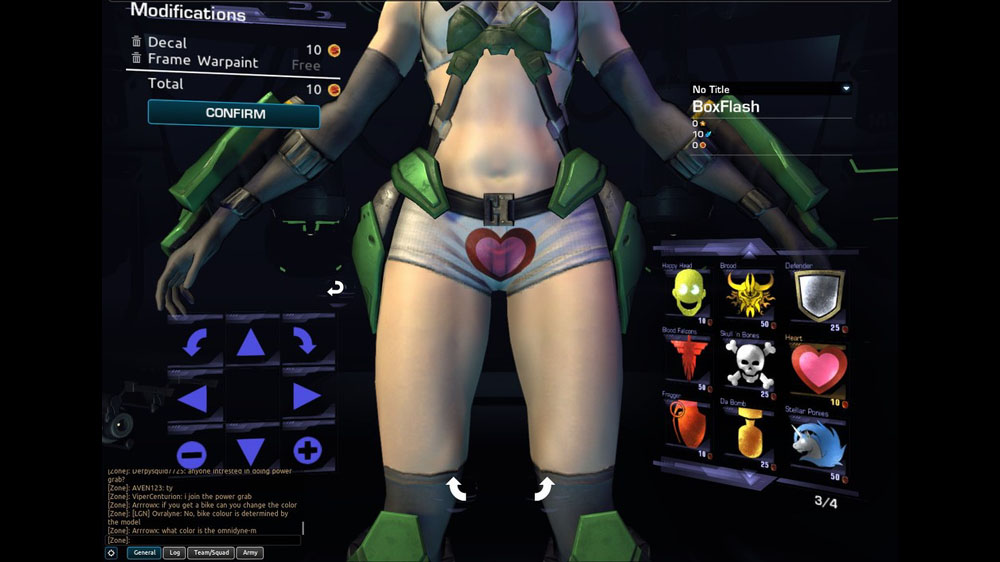 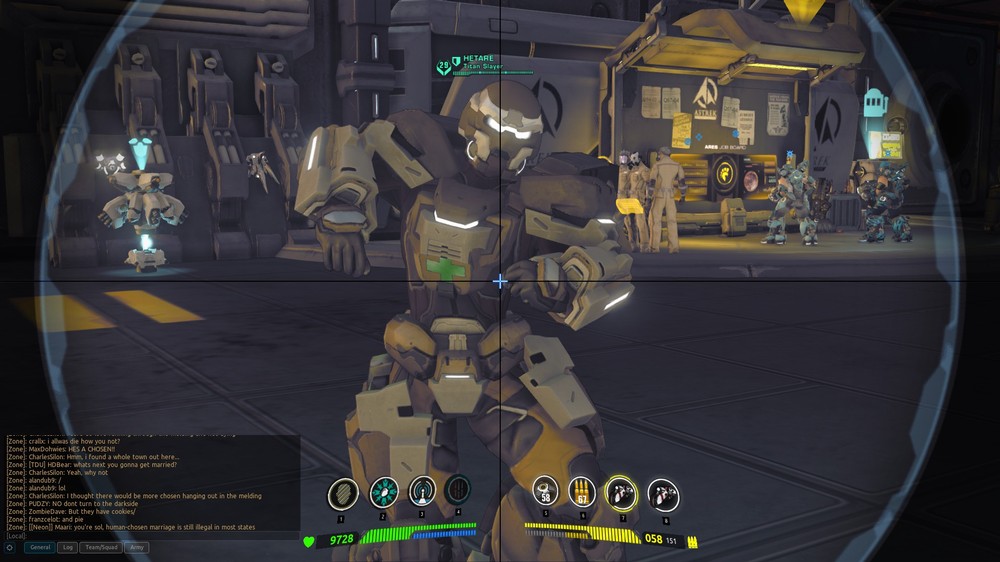 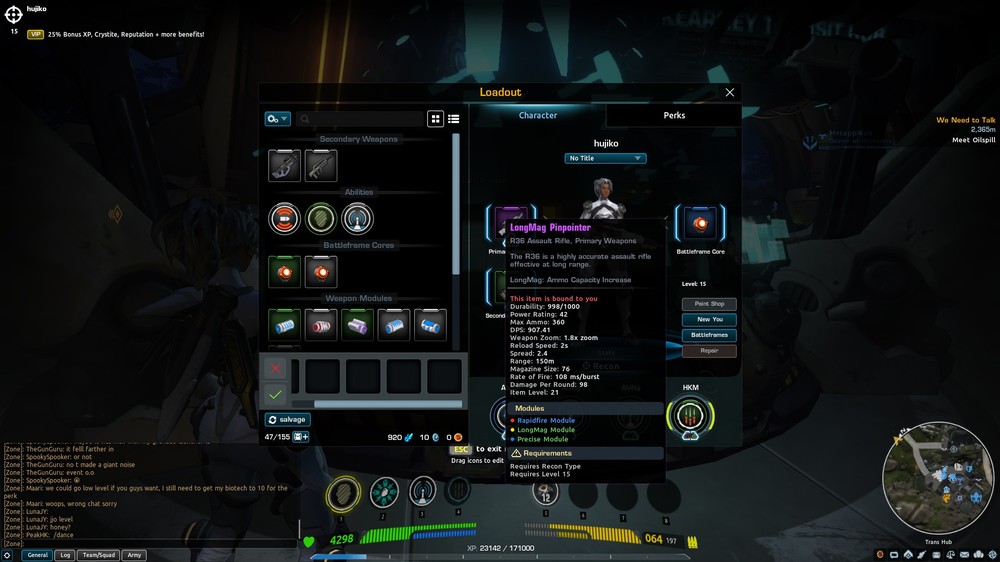