Easily the best stand-alone expansion of the year and a game that can compete and might just surpass a few other major titles.

The title, Far Cry 3: Blood Dragon is a bit misleading. While the game is certainly using the same core engine and many of the gameplay nuances of Far Cry 3, the similarities stop well short of this being labeled a self-contained expansion pack. It is more akin to a major “mod” that probably would have sold and been received just as well (if not better) had it divorced itself from the Far Cry moniker.

Blood Dragon is an 80’s-inspired masterpiece of pop-cultural and self-referential material, all assembled into an incredibly fun and addicting game despite the repetitious design of its content and methodical presentation. It features all the combat and mission structure of Far Cry 3 without all the hunting, gathering, and crafting – you know…the boring stuff. This is hardcore shooting action tailored and targeted for ADD gamers who are most assuredly stuck in the 80’s. 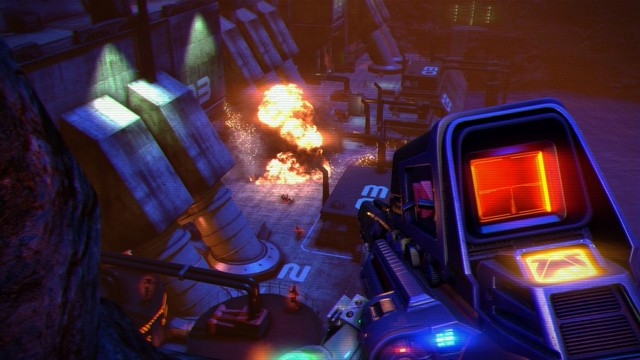 The plot is so thin it’s nearly non-existent, told through intentionally shoddy 8-bit story panels that are actually refreshingly original. Australia and Canada have been nuked in this alternate-universe Cold War reimagining of 2007. You play Sergeant Rex Power Colt charged with hunting down his former commander who has gone rogue and plans on dominating the world with his robot army. Rex has a few cybernetic implants of his own that make him the one-man with the arsenal of weapons and one-liners that can stop this threat, but not before poking fun at just about every significant game and pop-culture tidbit from the past two decades.

Blood Dragon takes the world of Far Cry 3 and spins it into a bad acid trip inspired by TRON. The world is cast in this highly contrasted perpetual nighttime, juxtaposed against neon-trimmed architecture, items, weapons, and even the creatures, with irradiated cows, snakes, tigers, boars, and the deadly but useful Blood Dragon. These creatures are some of the most difficult encounters in the game, but before you kill them you may want to exploit them by tossing out the cyber-hearts that you’ve been collecting from your fallen enemies. These tasty morsels can be used to lure the dragons into enemy areas and have them do most of the dirty work for you. 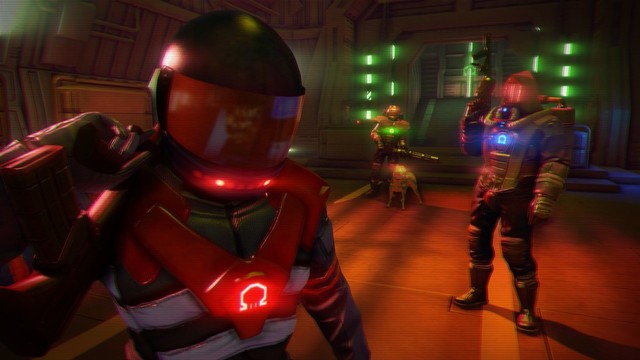 For those who played Far Cry 3, the mission structure is laid out much the same with primary objectives that progress the 6-8 hour story, and another 8-10 hours of secondary objectives and fetch-quests that, while purely optional, will certainly help boost your stats and add weapons and abilities to make the main quest easier. There are over a dozen enemy caps scattered about the impressively large map and each will need to be liberated much like the camps in Far Cry 3 – usually silencing the alarm then picking off the soldiers until clear. You also have the more challenging option of sneaking into the camp, disabled the dragon shields and then luring any nearby Blood Dragon into the base.

Despite countless memorable moments the game does get insanely repetitive at times; especially if you are powering your way through in one or two sittings. The list of quests and objectives starts to read like a shopping list, and it’s easy to fall into a trance as you check quests, objectives, and side-missions off nearly as fast as you unlock new ones. The fresh infusion of new and exotic weapons and upgrades helps to keep things fresher than they would be otherwise – were talking weapons that you’d expect in a Ratchet & Clank title, but in an adventure game where pretty much the entire map is unlocked and opened from the beginning, I just wished there had been more structure to the experience. 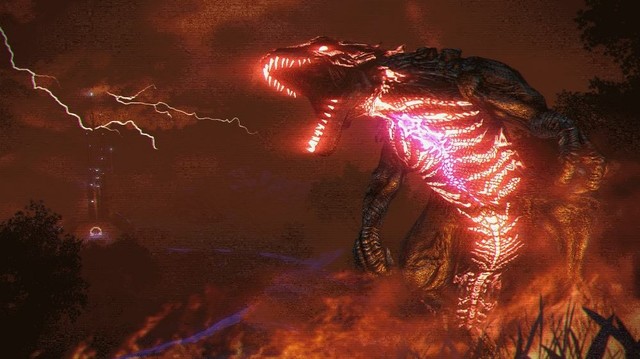 Far Cry 3 was definitely superior on the PC when it came to graphics, but Blood Dragon evens the playfield between PC and console with some intentionally “bad” graphics – not bad in the conventional sense, but with scan lines that plague the entire experience and overly contrasted lights and repetitive enemy models, Blood Dragon pales in comparison to its namesake. Thankfully, that is intentional and befitting to the retro theme of the game and its surreal stylized presentation.

Expect plenty of corny one-liners, most of which are delivered by Michael Biehn who plays Rex, but even his supporting cast all turn in memorable performances with hilarious filler dialogue. This humor even translates into the text-based mission orders you’ll be reading on the various consoles in each base. The music is just as charming and fitting to the retro theme with classic nods to movies and other video games of the era. Blood Dragon is definitely a blast from the past when it comes to the audio.

Far Cry 3: Blood Dragon kept reminding me of Duke Nukem, and that made me sad because Duke Nukem could have been this good…it should have been this good. Loaded with infinite 80’s retro charm and more one-liners than one-hit kills, Blood Dragon is easily the best stand-alone expansion of the year; a game that can compete and might just surpass a few other major titles in 2013, and for only $15 you owe it to yourself to take this neon, cybernetic, dragon infested ride into the past. It’s not a long trip and you’ll remember much more than you’ll forget. 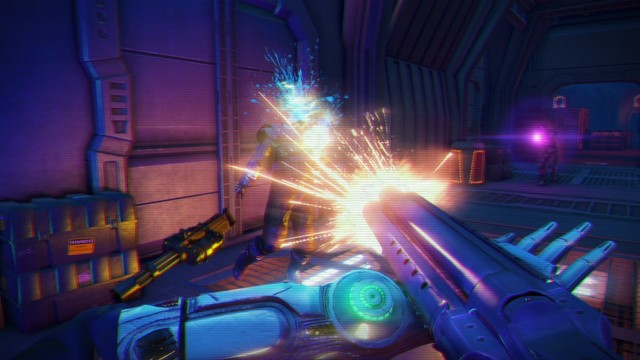 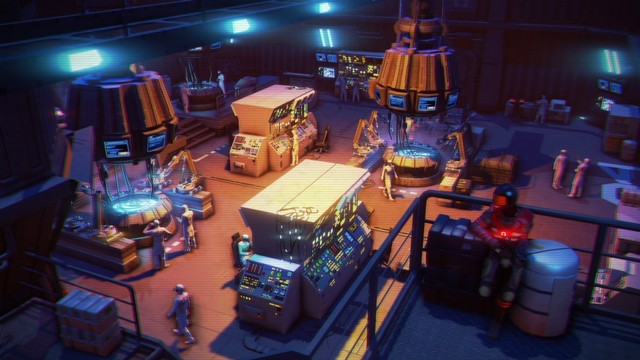 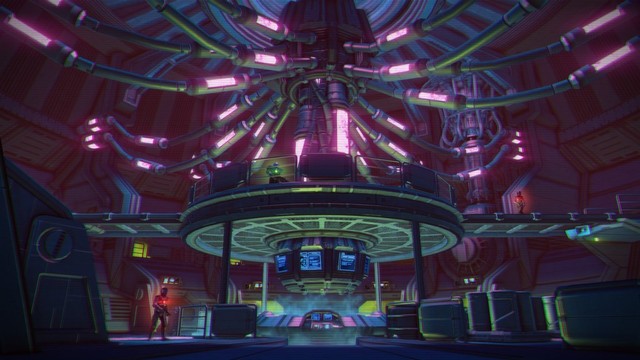 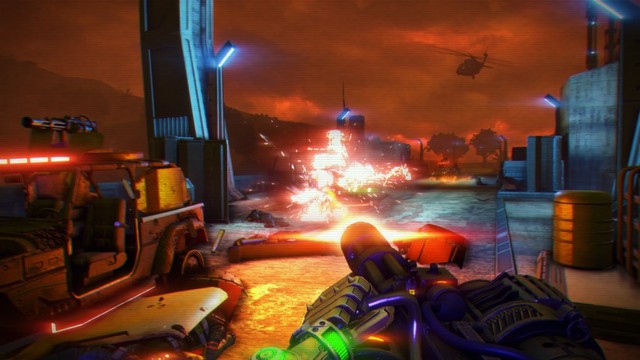 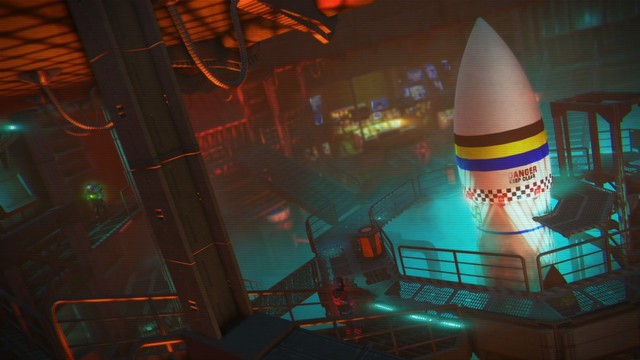 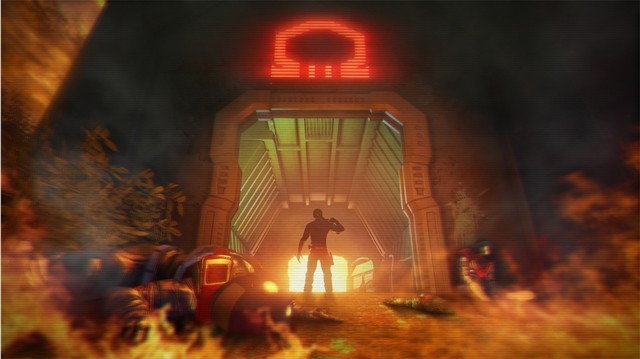 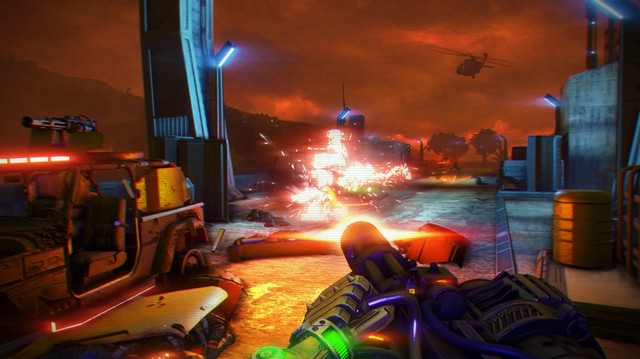